A log cabin, and following strangers in pickup trucks

Way back at the Rumpass in Bumpass Triathlon, our friends Lindsey and Carl had planned to join us for the weekend (and race) down at Lake Anna in the RV adventure.  The lake is about 90 minutes south of DC (without traffic, 3-4 hours with) – and a nice retreat from the busy city of Washington DC.  It also happens to be one of the few legal places to open water swim in the greater Washington DC area….thus making it a perfect location for a training weekend.

After being home for about 12 hours from my last trip, we went ahead and loaded the car (bike still in the bag) and headed on south.  Our journey would take about 3 hours in total, but the end location was certainly worth it: 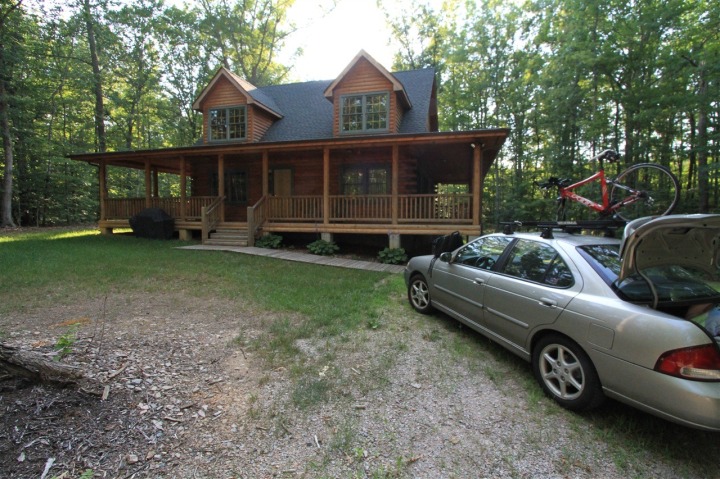 We had rented a log cabin for the weekend, at a surprisingly cheap rate.  It wasn’t directly on the lake, but was just a few miles from it – so close enough for our purposes.  The place appeared to be brand new, and inside it was just as nice as outside. 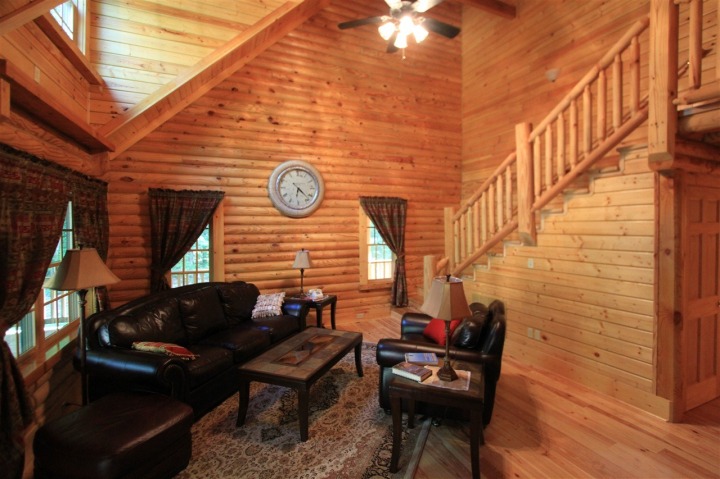 From there we cooked dinner and pretty much just relaxed the rest of the night just sitting out on the porch enjoying doing absolutely nothing.  Finally.

The next morning The Girl made her famous Chocolate Chip pancakes for the group.  While we had many great meals – this was the only one I got pictures of.  Doh! 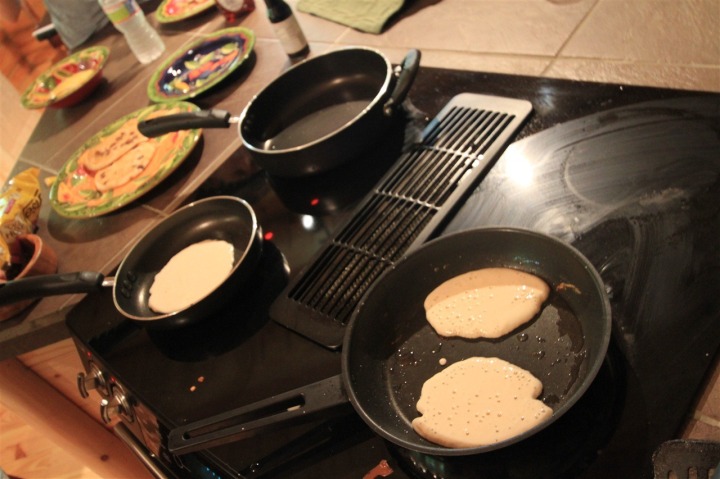 After the pancakes, it was time to head out into the rather warm weather for a bit of a run.  By ‘rather warm’, I mean triple digits.  And the route certainly didn’t offer much shade.  About the only shade I found was when I got back.  But, being an out and back course, the 10 mile run went pretty quick.  And soon…I was happily done (and completely drenched). 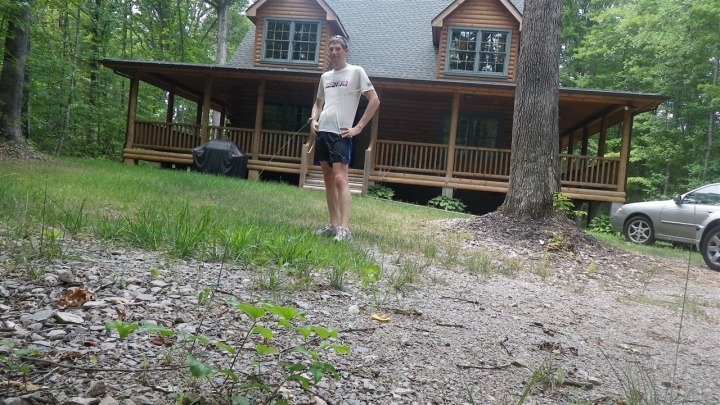 The rest of the afternoon returned to lazing around and taking naps.  From a training standpoint, this was pretty much perfect.  Though, we probably all got a bit too lazy, as it wasn’t until around 7PM that we realized we still needed to both swim…and make/eat dinner.

In theory getting in the water should have been relatively easy.  In reality, we took some wrong turns.  Lots of wrong turns.  Not at all unlike the very first adventure I had with The Girl back two years ago…in this very same area. Luckily, this time we were in a car.  After asking at a gas station how to find the swim spot (marina), a stranger overheard our conversation.  Though, he didn’t say anything then to us.

Instead, about 3 miles down the road he flagged us down (by driving on the side of the road virtually in the cornfields).  After a brief conversation about our intentions (four people in a car looking to ‘swim’), he casually said to follow him to his place, and we could just go from there.  So we did. 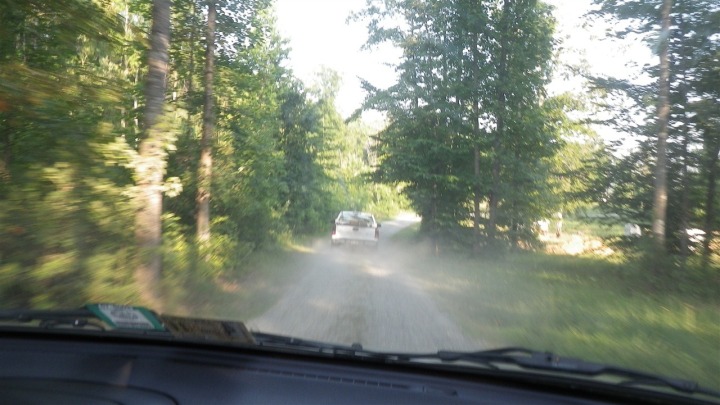 I believe along the way however he might have changed his mind – as he was driving his pickup truck about 80MPH on 30MPH dirt roads…fear not though, I wasn’t gonna lose him.

After a short drive, we ended up at his lakeside place…which was pretty sweet. 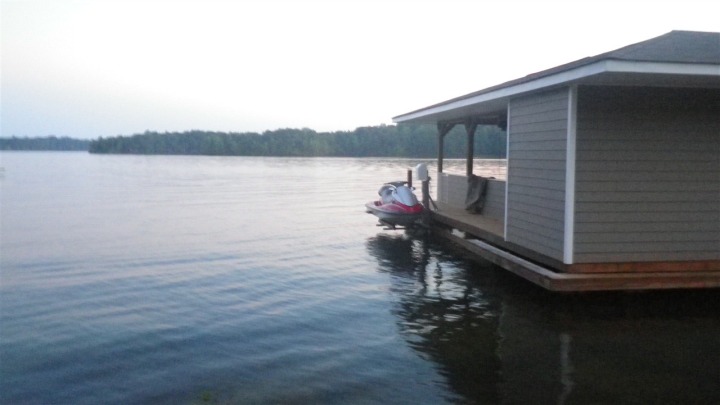 Immediately upon arrival, his two little dogs rushed out and decided to make their new pad…in my car.  Pretty funny actually: 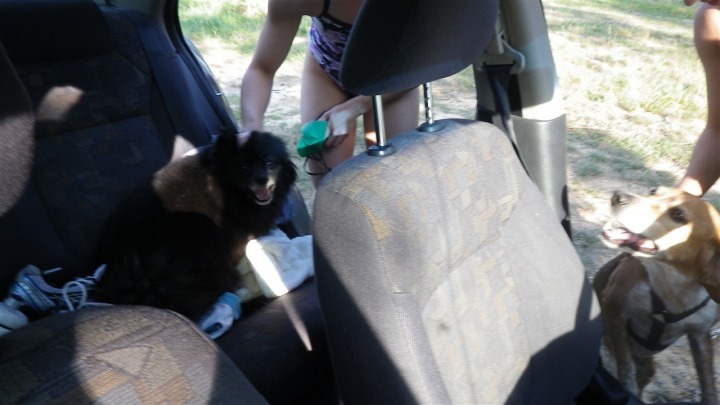 We had planned to use wetsuits, but the guy warned us it was rather warm.  By ‘warm’, he should have said ‘freakin hot’.  It was crazy hot – even hotter than the water I swam in just days prior.  The water was somehow warmer than the air.  Scary.  But that didn’t stop us: 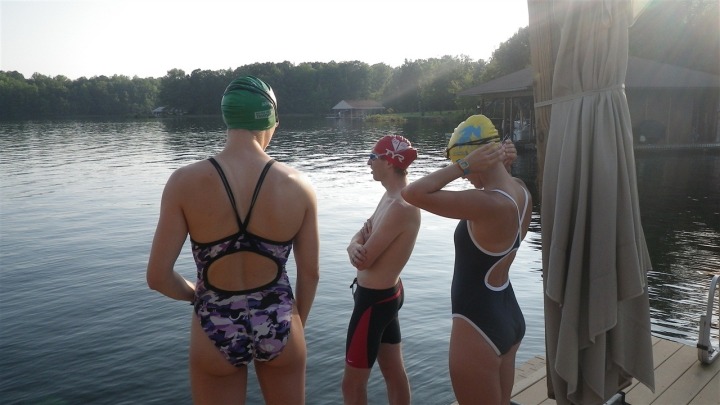 From there we made a huge ole triangly looking thing.  Now, you have to realize that Lindsey is an ITU pro…and we…well…are not.  So I think she swam the 1.5 mile triangle like 12 times while we managed once. 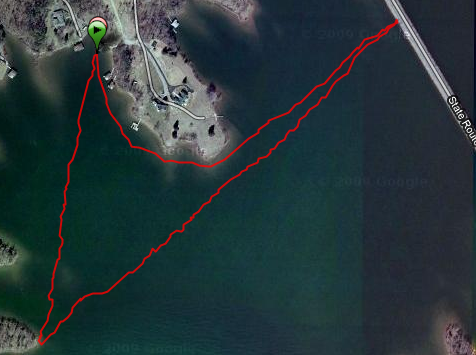 (Above track using Garmin 310XT in swim cap…works every time)

Eventually though, we all made it back to the dock: 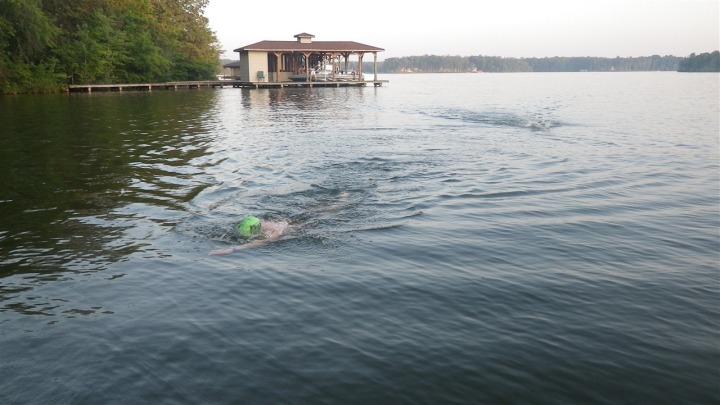 From there it was time to make dinner and go to sleep.  It’s funny in a house of triathletes after dark though – with all the bikes lying around: 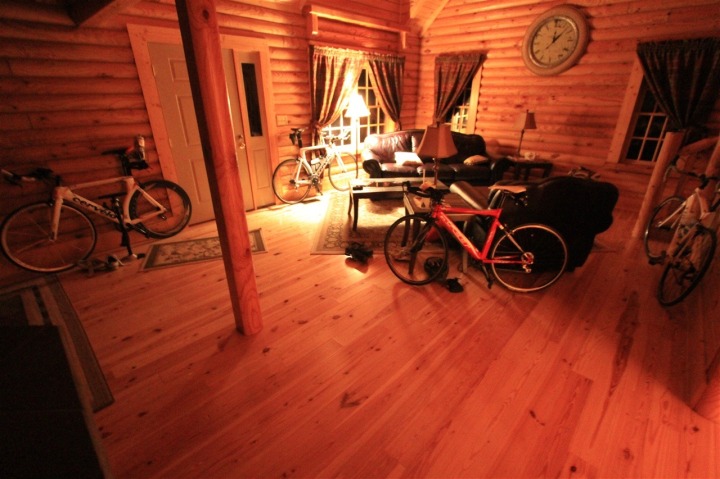 The next morning brought more adventures.  While we had a swim planned, when we arrived at our original location (not the dudes place) it was closed up.  Turns out the marina had gone out of business.  This made the swim portion of the swim-bike brick a bit of a nonstarter. 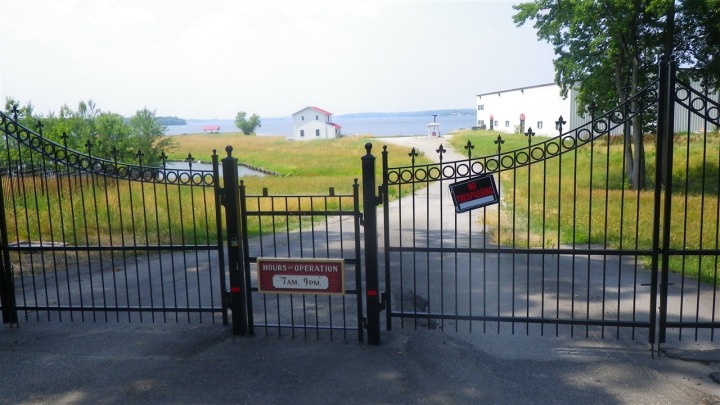 Nonetheless, we set out on the bikes.  Coach Alan had put together a 53 mile route that we easily downloaded to our Garmin’s.  From there, you just follow the little dotted line. Here’s the post I did on how to do this, if you’re unfamiliar. 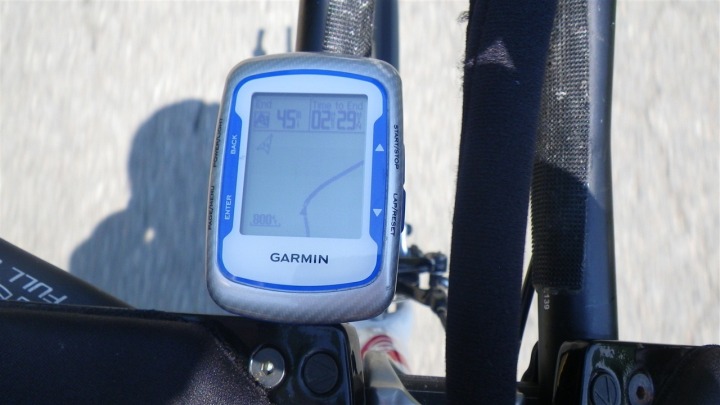 This isn’t to say I don’t carry a backup cue sheet.  I’ve learned my lesson once before the the hard way… 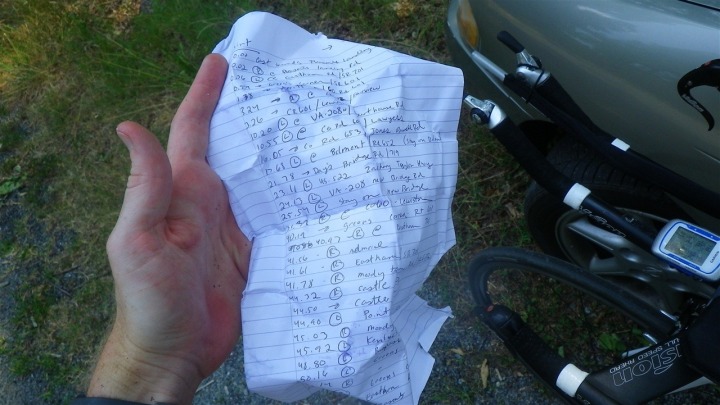 This area is pretty much just a ton of farmland.  Which is green and pretty to look, minus all the beer cans on the side of the road. 🙁 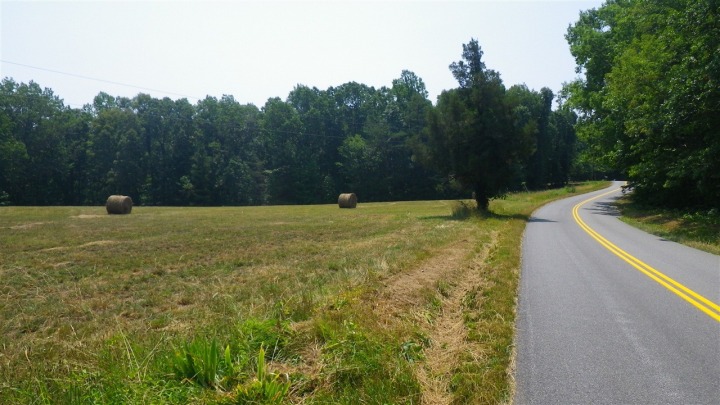 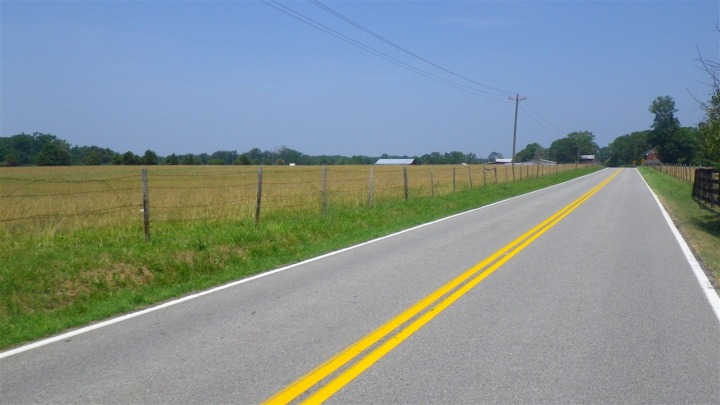 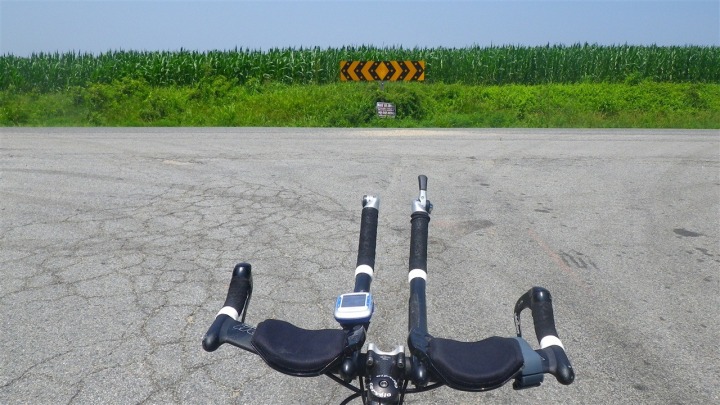 Along the way I had to pickup some more water, as well as some Gatorade (it looked good!).  It was at that juncture that I noticed my spare tube had inexplicably fallen off the back and wrapped itself around the hub and my brakes.  How on earth it did that – without me noticing or ejecting me – is beyond me.  Very odd.  Anyway, you can see it below all tangled up. 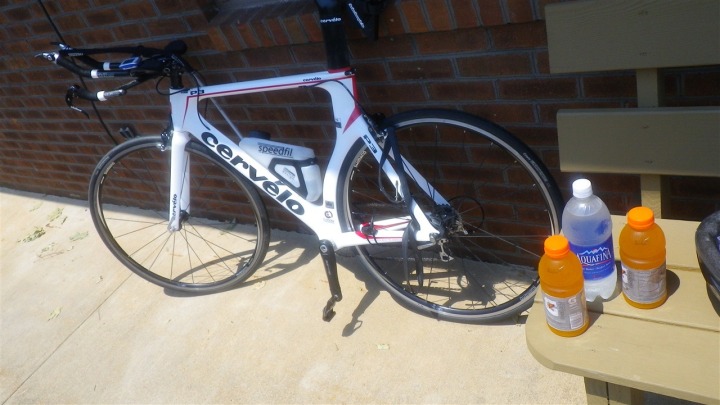 From there, it was just around the lake and eventually back to the car.  And with the temperatures again in the triple digits…the car was a wonderful place. 🙂 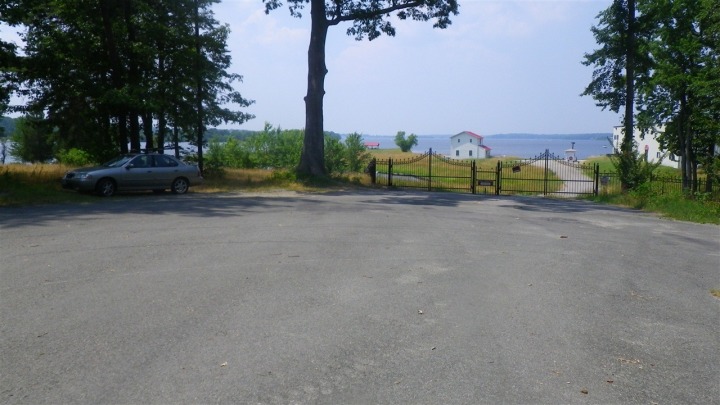 So, that’s all I’ve got for the weekend.  I’m once again back on a plane – this time headed out West for a few days of work (feel free to watch my Twitter feed for the exact location deets).  Though, at the moment, me, my bags, my bike, and my plane(s) are having a general disagreement about whether we want to all travel together on the same flight tonight – or even the same destination.  So we’ll see how this shakes out.  Have a good week all!