“Thanks for the review. I am going to likely buy the Forerunner 305 based upon your recommendation. I have one question for you that I believe was not addressed in previous posts or is stated in the manual. Does the 305 have the capability of storing multiple user profiles? My wife and I both plan on using it and it would be great if there was an easy transition from one user to the next. It would also be nice for integration on the PC and managing our training. Thanks for the help.”

This is a super common question I get – and I wish the answer were different, but unfortunately it won’t store different people, but rather only different bikes. Even the Forerunner 310XT will only store one human, but still stores multiple bikes. 🙁

However, one of the things I note is that for me all of the real calculations are done after the fact in software on the computer anyways. So the only true difference that on-the-watch per human settings would change would be calories (based on weight and body type) and even those can be re-calculated after the fact in virtually all sports software suites.  If you did pace by zones though, those would need to be adjusted each time.

As for the different screens, you can have many different data screens configured on each watch (each with their own set of data fields), so you can easily customize one set of screens per person and then just utilize that screen for that person.  Hope this helps!

“In your Timex Ironman GPS Global Trainer First Look Review you mention ‘For example, I use the Garmin Virtual Partner feature quite often to pace against, and I can just change the pace at any point in the run with a single button press and it recalculates.’ Now how do you do that?”

When on the virtual partner screen (while running), simply hold the up/down button for a second, and it’ll allow you to adjust pace on the fly.  My favorite feature!  For those not familiar with the Virtual Partner feature, it allows you to specify a given pace – say 8:20/mile – and then the screen will tell you how far ahead or behind you are in relation to that pace.  I’ve used this a few times in races when I’m trying to hit specific paces, and also use it in training here and there. 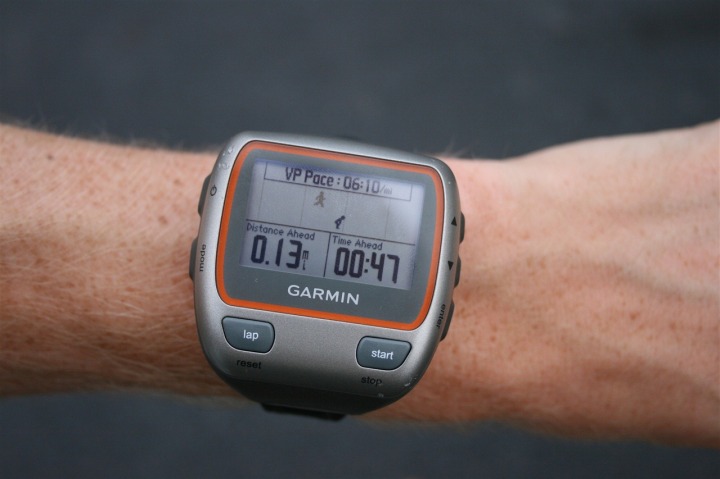 What Tim’s asking about is how to change that pace on the fly (mid-run), which I’ll do if I’m doing something like descending intervals.  With the Garmin’s, you simply hold the up/down button and it automatically changes the pace and resets the ‘counter’ – which is exactly what I want it to do.

“I am trying to mount my Forerunner to my Tri bike with the quick release bike mounting kit the only place that I can mount it is on my aerobars.  That said, the mounting kit is cast in such a way that if I mount it to my aerobars it will place the watch sideways (90 degrees left or right).   To compensate for that I have cut out a piece of PVC and attached to my aerobars so that I can mount the watch facing in the right direction.  However it doesn’t look very good and I was hoping you knew of a better solutions.”

I hear you on wonky connections for aerobars, I too fail to understand why Garmin doesn’t offer some simple accessory that works with the quick release mount kit…especially given it’s designed for triathletes (peeps with aerobars).  One thing I have for my CompuTrainer is a small sideways mount that quickly and easily unscrews.  They sell it as an accessory for $8 on their page, check it out: 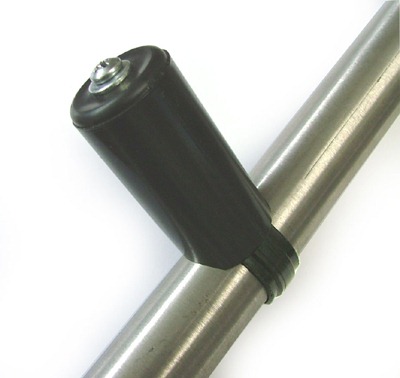 I’ve seen countless homemade solutions as well at races, along with a few more ‘refined’ solutions – so if anyone out there has any ready-to-buy suggestions, feel free to add them below!

All past mailbags here.

P.S. – I’ve been pretty slammed this past week, and I have a pretty big pile of ya’lls e-mails to work though, I’m hoping to get them done in the next couple of days.  Sorry!