For the first time since last fall, I was finally able to complete a full week’s worth of ‘normal’ workouts without worrying about injury – nor paying for it later with an annoyed knee.  While it certainly wasn’t a super-heavy week, I would probably classify it best with the following phrase: “Ladies and gentleman, we have reached our cruising altitude and you are free to unfasten your seatbelts”.  At this point I’ve completed a full week’s worth of base workouts without having my knee giving me grief…it’s time to start slowly kicking it up a notch.

I was finally able to rejoin my Saturday long-run group for some long run action.  Although 12 miles isn’t exactly ‘long run’ – it’s the longest I’ve run since November.  In order to ‘welcome’ me back, mother nature decided to toss sustained winds of 20MPH and gusts up to 40MPH.  Brutal.  But fun.  While the group is much larger, there were three of us that went off on our pace and just had a blast.  We kept it a fairly mellow 7:40/mile pace – and pretty much talked, made jokes and laughed our asses off all 12 miles around the monuments.  You’d be amazed at how many Washington Monument jokes you can cram in…no pun intended. 🙂

Sometimes it’s just nice to run and not worry about pace.  I put my watch under my coat and didn’t even look at it after I hit start.  We just ran.

Swim cause I’m a wimp

I normally swim on Sunday and bike on Saturday after my long run, but after becoming intimate with the winds and watching cyclists out on the trails struggling to both move forward and stay upright – I hit the pool instead.  Cause really…I’m a wimp.  Knocked out 2600 yards more or less nonstop with an interval set tossed in at the end.

I’ve managed to do my long rides every weekend this winter outside, and this morning I planned no exception to that.  But I’ve never come as close to turning around, going home and getting on the trainer as I did this morning.  It was fairly cold still when I started at 9:30AM – and for whatever reason – my fingers become frozen ice cubes within about a mile of the start.  Like pain hurting frozen ice cubes.  Add a little bit of leftover wind from Saturday.  I stopped a few miles later after I couldn’t feel anything and quickly warmed them up.  Oddly, after that they were fine. 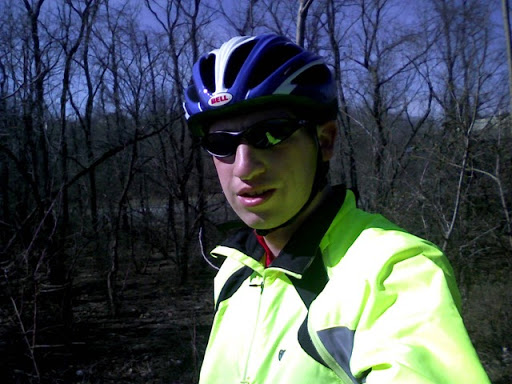 I stopped to take a few photos with my cell camera, and took one of myself.  I thought I was smiling when I took it.  Apparently not.  Guess that’s how I was really feeling about the whole situation.

So I went outwards to the middle of nowhere on the W&OD.  Endless slow rolling hills and nothingness.  But peaceful nothingness (once it warmed up). 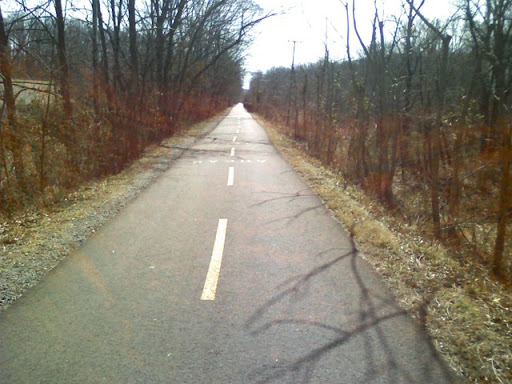 The above photo is actually fairly ugly…but then again, that’s kinda how it really looked.

50 miles later, work complete.  A touch slower than I wanted.  The trail traffic probably cost me .5MPH, and I lost another .5 to 1.0MPH because I need to HTFU.