While it’s always my goal to secures loot and gadgets to take home the week of the convention, sometimes that just doesn’t work out.   The reasons usually vary, sometimes it’s because the company simply doesn’t have enough units on hand (usually if you wait till the last day of the convention you’ll be in luck), other times it’s because they’re waiting on a last minute software/firmware/something update and they’re concerned about the item before then.  And sometimes, it’s simply because someone accidentally gave away the one with your name on it.

Regardless of the situation, here’s all the goods that I got to spend some hands on time with yesterday, but didn’t get to take home today.  These things are supposed to ship out next week to me, but could perhaps spill over into the first few days of the following week.  In tech timeline speak, that means I’ll probably get them in April.

Actually, I do think I’ll really get most of these next week – as all of these are finished hardware products.

The Basis watch is a continual body monitoring watch.  It optically monitors heart rate, as well as skin temperature, perspiration, sleep, and activity (motion).  It’s like the mother of all Fitbits.

This has been a long time coming, but I’m excited about the platform.  I first spent time with them at their offices over a year ago getting a tour of things.  Then they went into a bit of hiding until back in November, when they showed up on the scene and shipped out a handful of units just prior to Santa showing up. 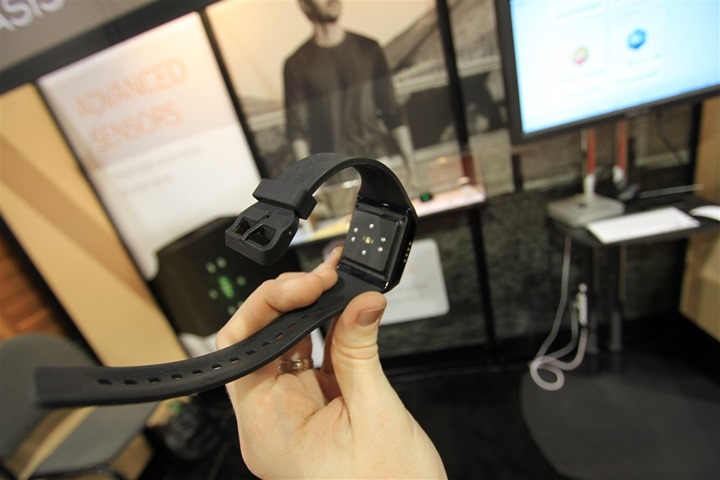 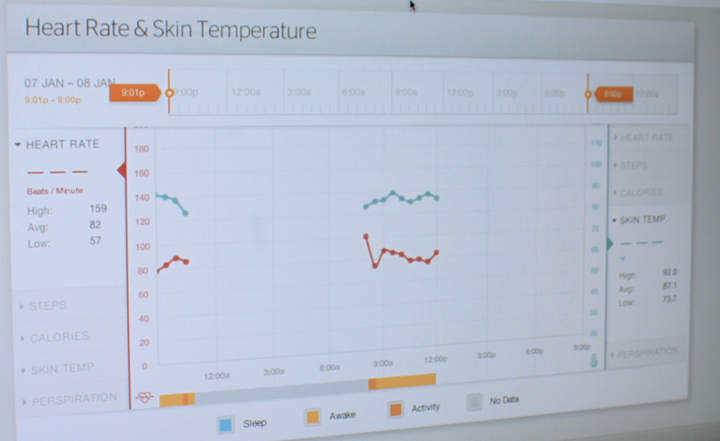 Spending a bit of time yesterday with the software platform, they’ve made significant strides there in taking the data in and really making it consumable and actionable.  They’ve reduced down the website dashboard display rate to once per minute (it averages values over the last minute), so while I was concerned about the reduction in rates upon initially hearing them – I think the display average over a minute is interesting when pulled back at the full day level.  And since the data is up there in a database, in theory if an API were opened up, one could access it at that level of granularity  Additionally, they also will automatically determine resting heart rate on a daily basis. 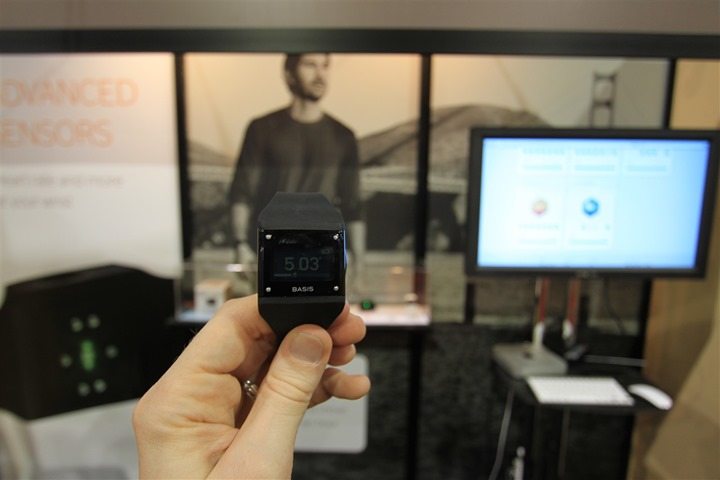 Units to media ship out starting next week, and they’re still working through the backlog of orders previously.  And no, I have no idea why they don’t juts re-open their ordering system to folks that want to order units.

I think this is probably the most anticipated product that people don’t realize they want, until they understand what it does.  In short, it it’s a $79 heart rate strap that not only transmits your heart rate over Bluetooth Smart and ANT+, but also (this is the important part), funnels through any other ANT+ devices you may have into Bluetooth Smart for apps to leverage.  For example, it can take that ANT+ PowerTap you have, and funnel it in to a phone as a Bluetooth Smart Power Meter. 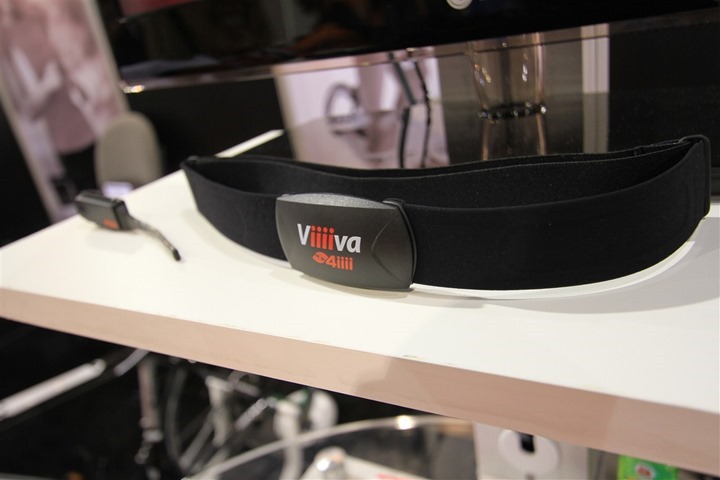 As you can see on the back, both logos: 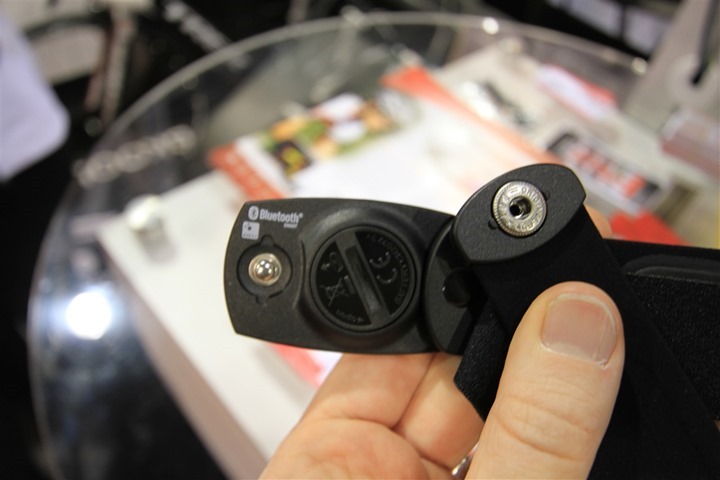 The strap is firmware updatable – over the air – and thus as some of these standards get defined, it can make headway on that.  Meaning that today some of the standards for how these athletic devices in the Bluetooth Smart world communicate aren’t exactly solidified yet like they are in the ANT+ world (in time, they will be).  For example, today the Bluetooth Smart heart profile is as good as concrete.  The Bluetooth Smart power meter profile is more like a baked brownie – pretty solid, just waiting official ratification.  Then there’s stuff like the footpod for running, that’s more like…pudding. 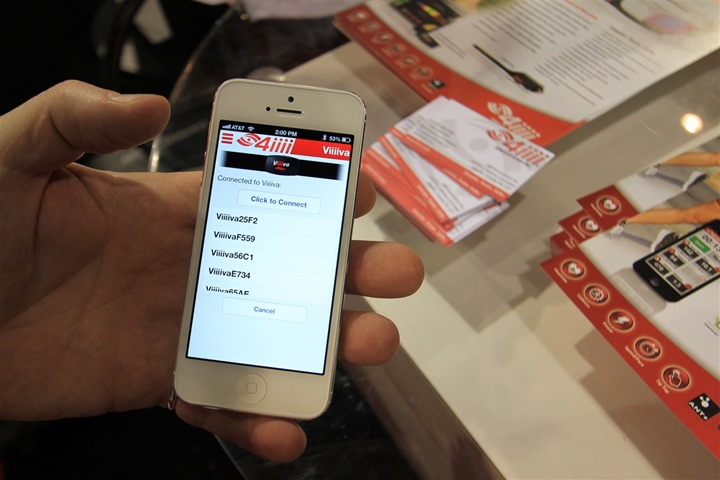 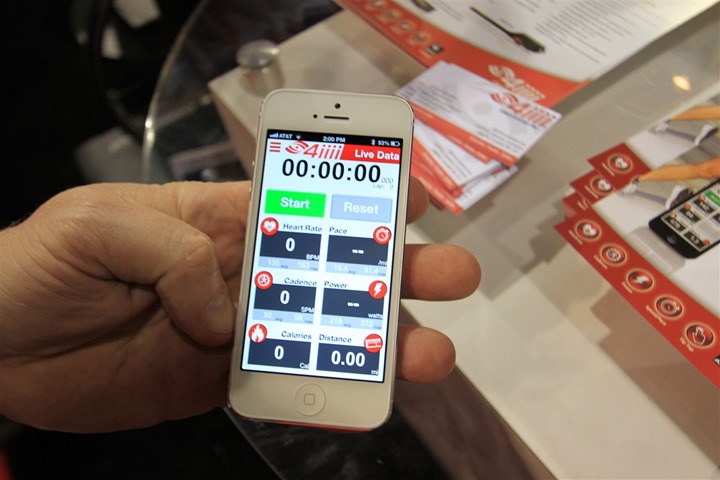 Below, you can see (just barely due to my photo), the connection has been established up top to the heart rate strap, and now the subsequent connection is being established to an ANT+ footpod. 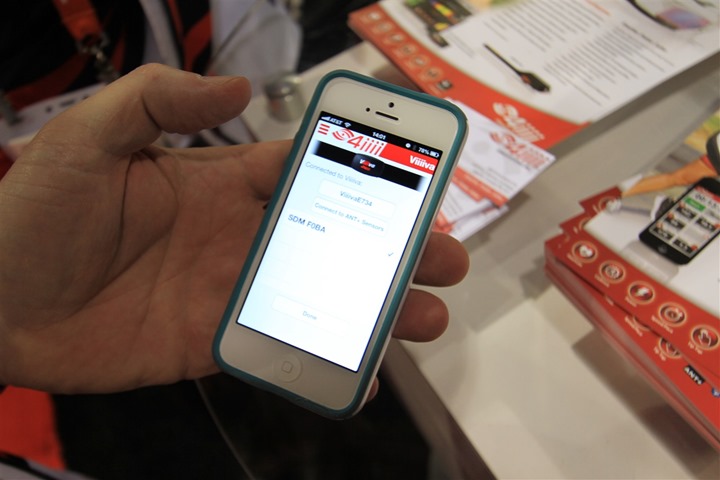 With the firmware updating of the strap, they plan to offer additional ‘add-ons’.  The idea being that you could unlock additional features in the strap.  For example, for the base $79 you’ll get all the stuff I’ve talked about thus far.  And all that works with Endomondo, MapMyFitness, Runtastic, Runmeter, Strava, Training Peaks and Runkeeper, amongst others.

But, there’s other functionality they have in there, or could develop.  For example, they have an accelerometer jammed in there, so they can mimic a Fitbit (activity monitor).  That could be a $10 update (pricing TBD, just offering context).  They also can store .FIT files too – the idea being there that someone could not even wear a watch at all, and have all the ANT+ data just recorded (HR/Speed/Power/Cadence/etc…).  That could be a race, or, it could be something like recording HR at a pool or openwater.

The plan is that those would be updates that will be unlocked through in-app purchases directly via the iTunes Appstore.  Timeline wise, they’re hoping to have the final firmware done in the next week or two, and units out no later than February 15th, but they’d like to see that be more in the January timeframe.

The Polar H6 pretty straightforward.  It’s a Bluetooth Smart Heart Rate strap.  Unlike the previous Polar H7 Bluetooth Smart strap, this does not include the analog signal alongside it.  Just pure Bluetooth Smart.  It’s priced a touch bit cheaper at $59 Euros ($69US).  Note that like any other Bluetooth Smart-only product, you’ll need a compatible device. 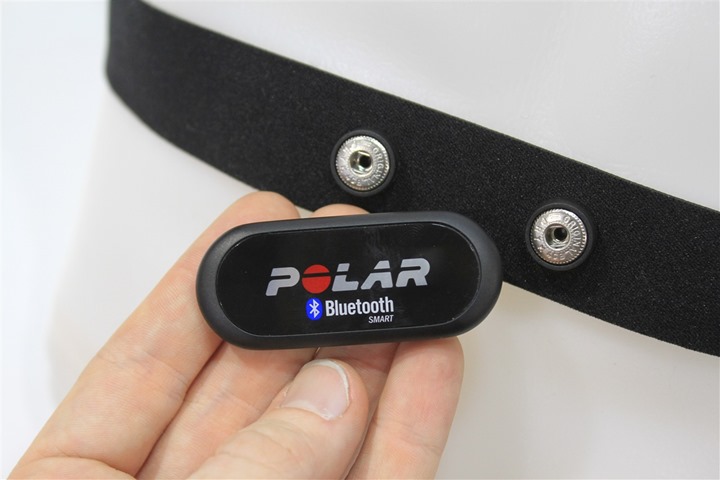 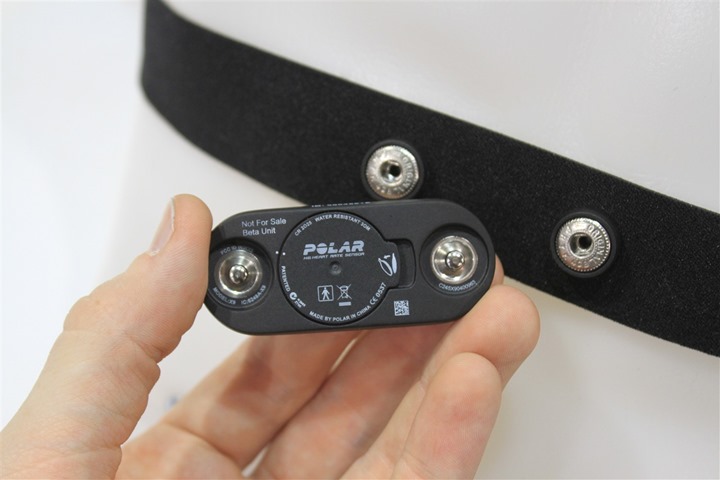 My only concern is that at this point, with the Viiiiva costing just $10 more, it makes for a tough case.  I was hoping to see the H6 a bit cheaper (like $49).  That said, Polar has a leg up on most folks in that they’ve spent more time on reducing/eliminating heart rate spikes/dropouts than others.  So assuming that carries through here – that could be a reason to go with the H6 instead, especially if you don’t care about the other features of Viiiiva. 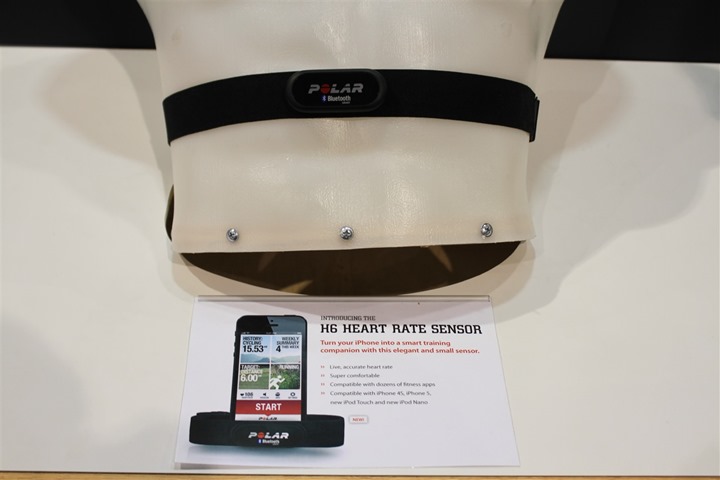 As I mentioned earlier today, I’ve picked up the O-Synce Navi2Coach unit, but they didn’t have any spare wireless remotes.  This little yellow remote uses a standard industrial rubber band to snap in place on your handlebar.  It then can remotely control the lap button on the unit itself.  That way you don’t have to take your hands off the bars to hit lap.  Probably most useful for mountain bikers, but really applicable to anyone. 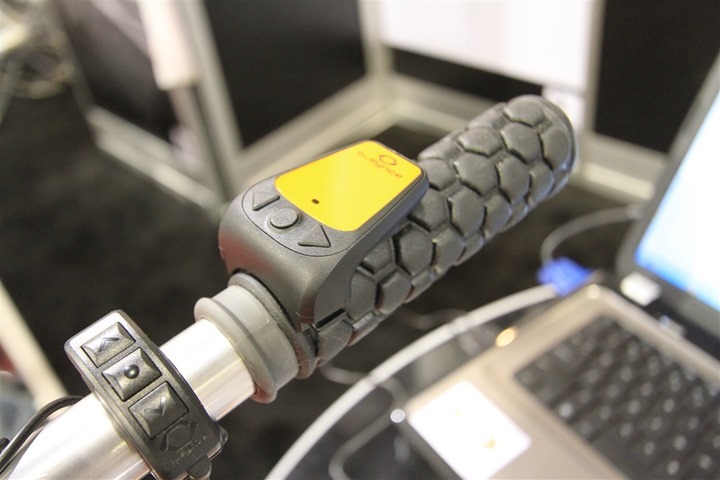 This is one of those cool and simply inventions that would be cool if more companies supported it.  Especially since it’s already an approved ANT+ spec item, so it would be straightforward to do.  Translation: There’s nothing stopping Garmin or CycleOps or whomever from supporting this on an Edge 810 or a Joule GPS. 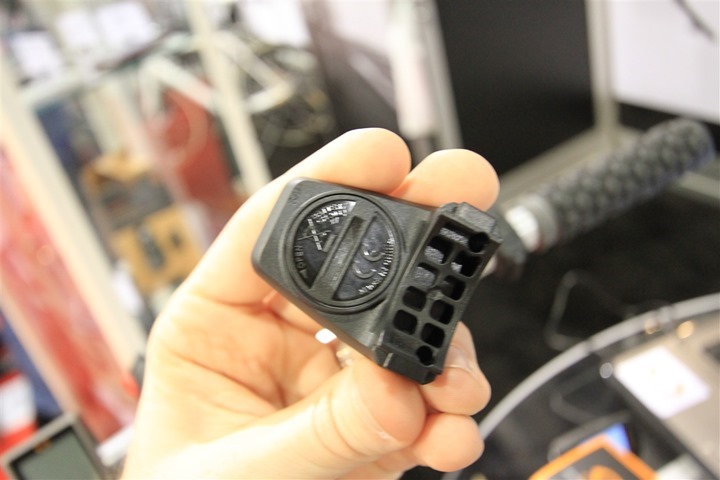 The next one is interesting in that it’s not an actual saleable product.  Instead, it’s the underlying technology for other peoples products.  Meaning, that they (Valencell) aren’t selling what you see below (in orange).  But, you’ll find the exact same technology in other devices – such as the recently announced iRiver On – seen a couple pictures below. 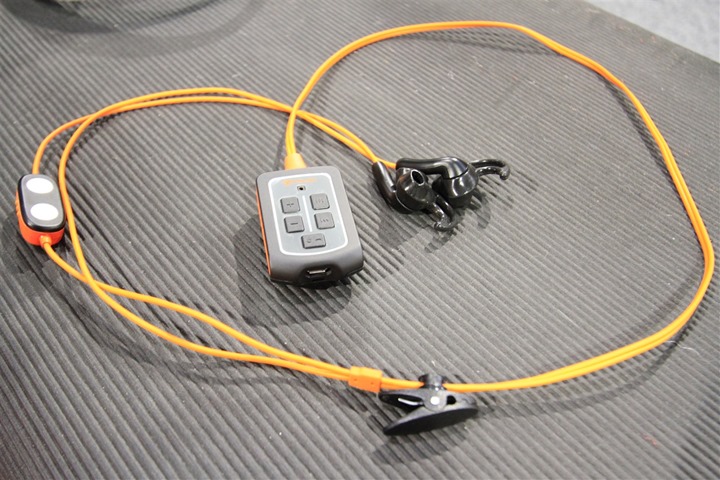 The heart rate is measured via earbuds, and then runs down the cord to the little music controller which also acts as a Bluetooth transmitter (standard BT, not BT Smart).  Again, this is just the underlying technology, as you can see in the iRiver implementation, it’s all effectively cordless.

The earbud measurement is optical an IR emitter to measure your heart rate – in a similar style to that of both Basis and Alpha HR, except in the earbud and not on your wrist. 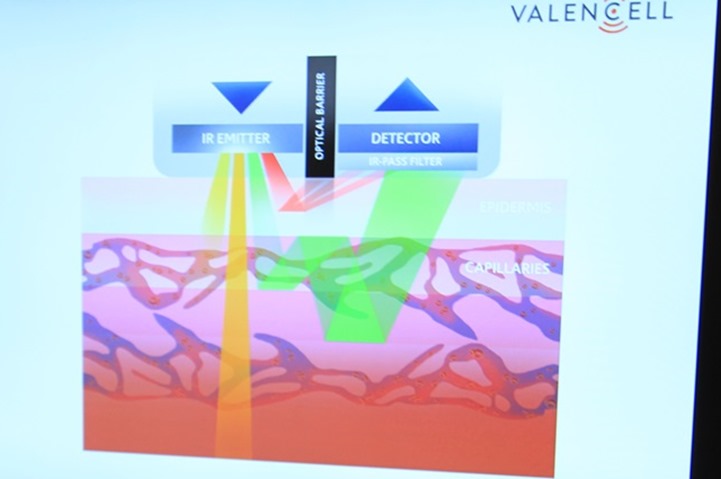 Below, you can see the athletes heart rate being displayed on the live screen to the right via an app they’ve developed.  In fact, the app on the whole was actually pretty impressive and well polished for what is essentially a demo app.  Also of note is that they are measuring cadence too – and thus, distance.  Pretty cool. 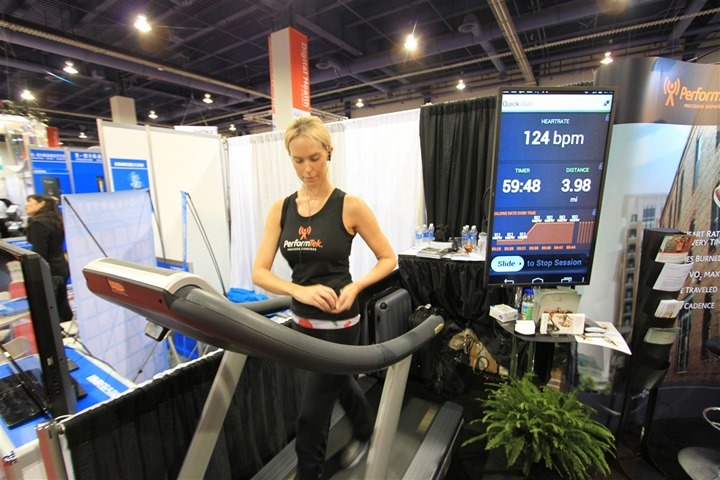 My interest here is mostly just to understand the technology and see how well it works in real life.  Like the optical wrist band technology – there are lots of skeptics, and I’m curious to find out where it works and doesn’t.  I don’t at the moment have an iRiver On, and that’s targeted for later in March or so.  My hope is that even though it’s coming from a music company, that they’ll follow some of the standards out there and thus it’ll be just as useful to serious athletes as those more casual.  Oftentimes I see companies that feel the urge to release fitness products do it in a way that’s not compatible with other stuff out there, making them of less use to many than if just a tiny bit of time had been spent to understand the existing landscape and integrate with it. 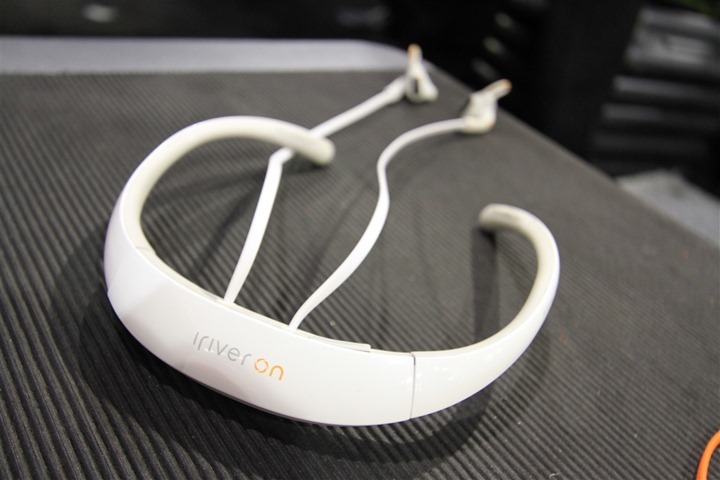 At any rate, cool stuff.  And funny looking back at this post that so many of the items are focused on heart rate.  Who said HR technology was dead?

Now, fear not, there’s more stuff from CES coming!  I’ve got a whole raft of new fitness and health trackers (activity monitors, scales, apple testers, etc…), some time with a 360* sports camera (like a GoPro, but shots everything around you the entire time and you can adjust view later), and then of course the Leikr GPS sport watch.  Hang tight!