A Dubai Runaround (Night Interval Edition). And a camel. 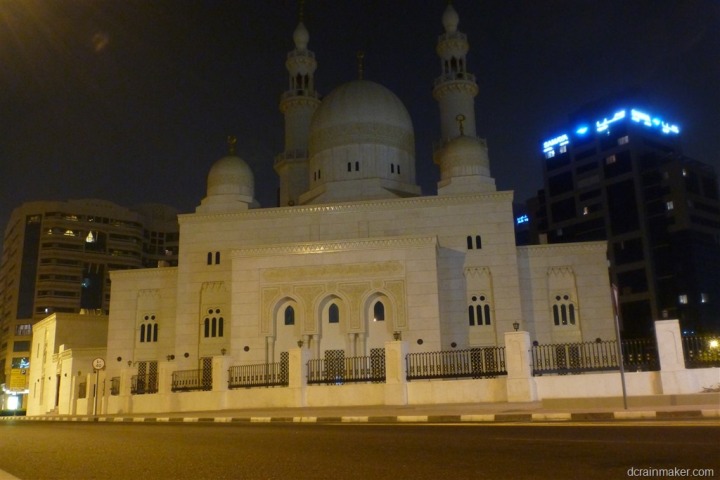 We landed into Dubai at around 10:30PM Saturday night, after a 7 hour flight to Doha, Qatar, and then another hour flight onwards to Dubai.  Customs took a wee bit more time, due to The Girl’s Canadian Citizenship (the UAE and Canada have been in a bit of a kerfuffle for about two years now, thus requiring visas for Canadians).  On the bright side, our luggage was there patiently waiting for us by time we exited.

We got into the city a touch after midnight, which wasn’t too bad in the grand scheme of things.  We had hoped to have completed an interval run of hers earlier that morning prior to the flights, but a last minute change of plans put the kibosh on that.  Since we had gained three hours in the flight – we weren’t terribly tired, and really didn’t want do push off the run.

So we did what any other normal person would do – go for a run at 1AM in the Middle East in the dark.

Of course, in actuality, despite what you might hear about the Middle East – Dubai is a very safe city, even more so in the touristy areas – which is where we were.  We were staying in Dubai Creek, a long and skinny river (well, creek) that’s filled with working boats.  Along it on both sides are wide paths/boardwalks/docks that make for easy running routes.

It was her interval run, so I was running with her at her paces on her training schedule.  We’ve been trading off a bit – where I’ll run some runs solo, but then join her on others.  I’ll have to explain more about that in a future post.  It’s all in the goal of pacing her to her goal time in next years Paris Marathon (April).

Tonight’s run called for a 10 minute warm-up, and then a 5 minute section building to interval pace.  Once that was complete we’d have a short 2 minute rest before going into the 5×5 set (5 intervals at 5 minutes each).

We decided to simply run outbound along the creek towards the sea.  We both prefer out and backs in this situation, as it doesn’t afford you the opportunity to call it a day (or night, as it may be).  Sometimes I prefer loops if the terrain differs or if I need water/etc. – but tonight it was flat and cool and we wanted to see some of the city.

The outbound starts off next to the busy port area.  Not big-ship port, but little boat ports.  Hundreds of small boats generally no bigger than a bus or three in length. 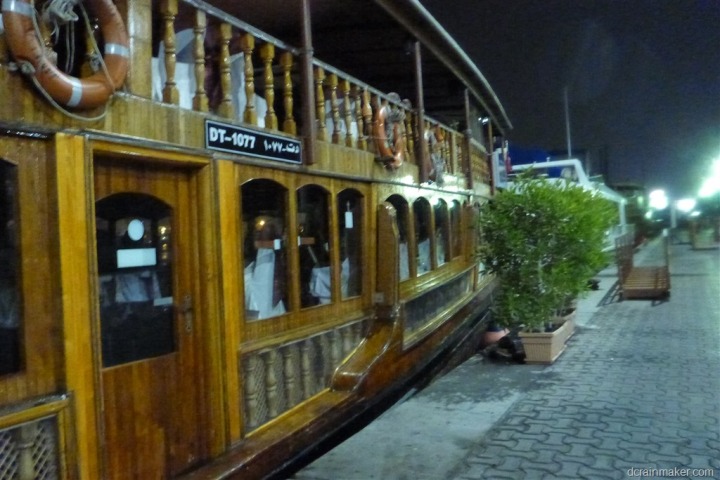 From there we’d pass relatively quiet green parks – save for a handful of guys playing cricket in the middle of the night.  But most of the time it just looked like this: 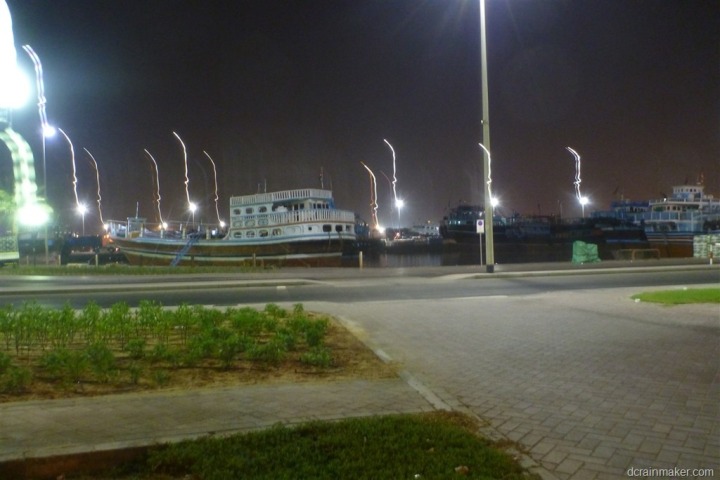 Next to all the boats along the road were the various goods ready for pickup (either by the boat, or others).  It was interesting to see how much stuff was just left there in the open. For example, want a case or thousand of vegetable oil? 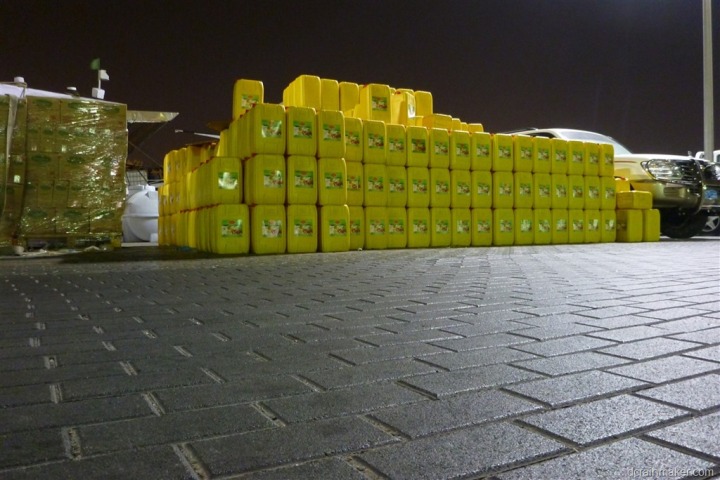 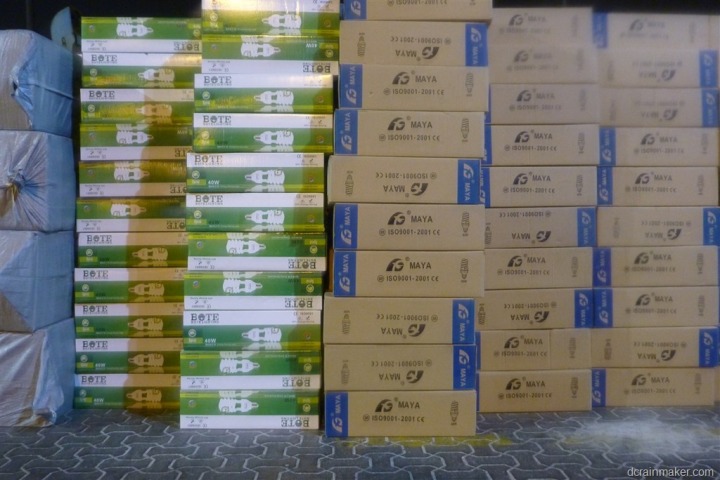 Heck, even Dumbo…err…Jumbo the elephant was there for the taking: 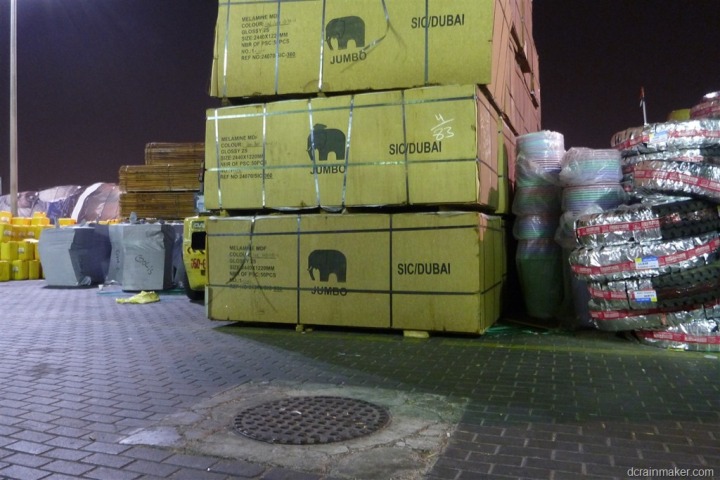 Poor guy, all boxed up.

Interestingly, there was some ‘security’.  Every half a mile or so you’d find a man camped out on or around the boxes.  Usually just on a blanket, and a single pillow.  Sometimes a lone chair.  Most though, were asleep.  Though, nobody was going to steal his light bulbs (on top center of picture). 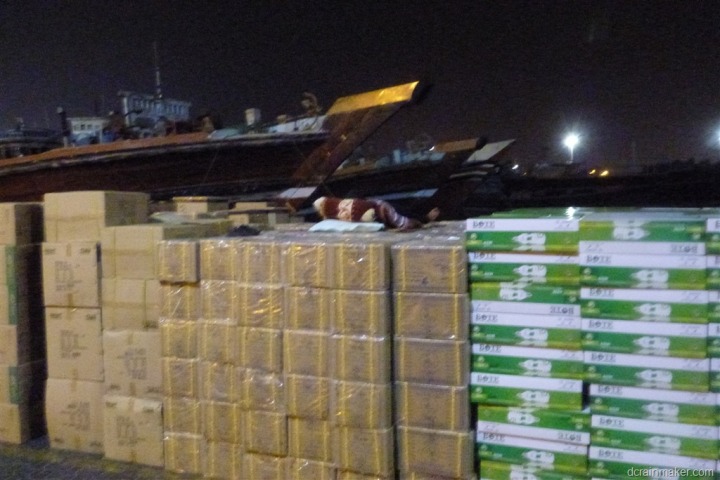 As we ran further away, things gradually got quieter on the boat front, turning into a path along the water instead: 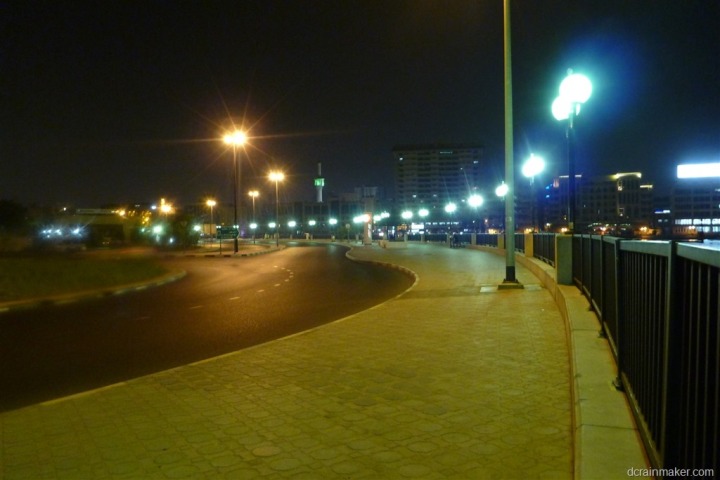 We eventually made it all the way out towards the Gold Souk before turning back and continuing our interval sets. 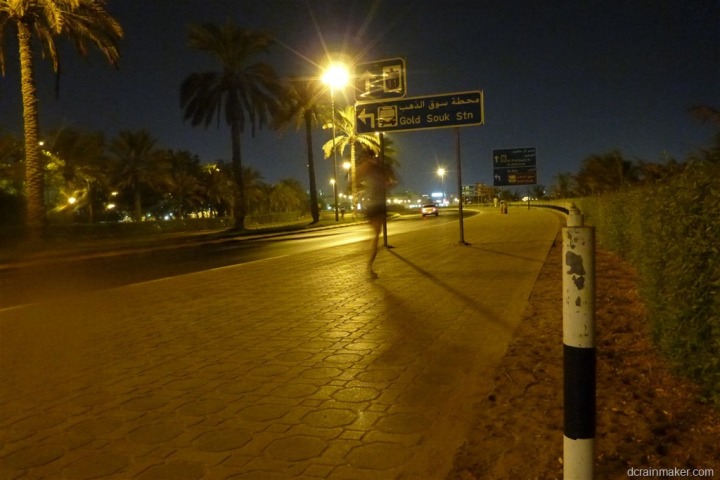 The interval run called for three iterations at one heart rate level, and then two additional iterations – each at a slightly higher heart rate level.  This would in turn result in all sets being roughly within a few seconds of each other pace-wise. 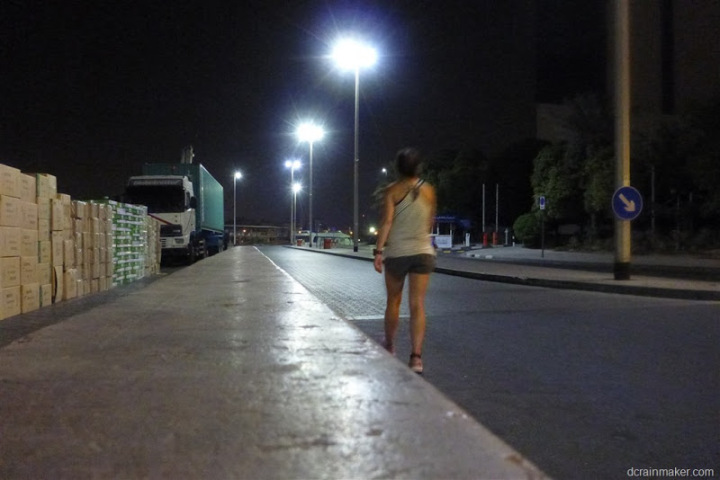 This really was a rather nice place to run at night.  There were a handful of people out and about, and nobody even so much as glanced the wrong way at us.  Plus, there were no cars (or hot burning sun) to worry about either.  Perfect night-time running. 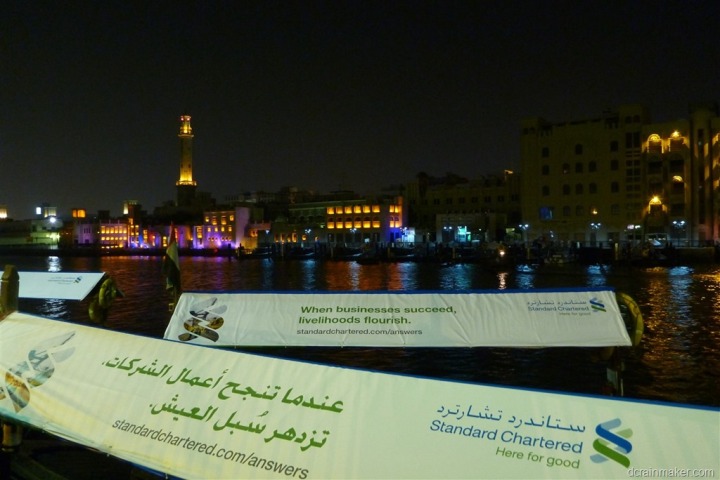 About 75 or so minutes after starting we were back at the Mosque next to the hotel – just around 2AM. 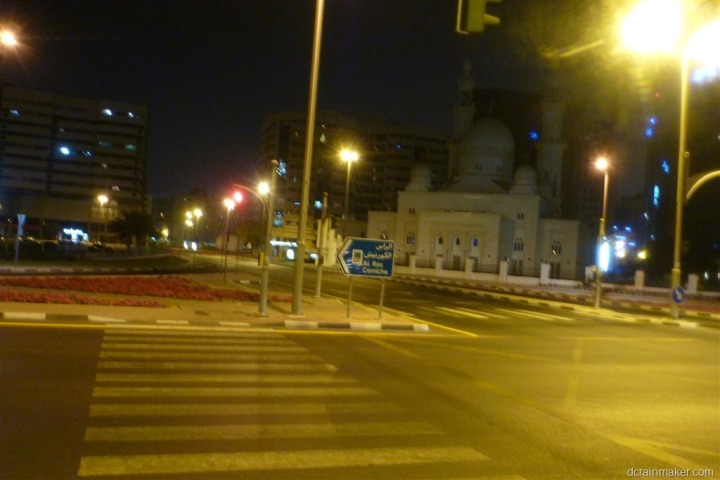 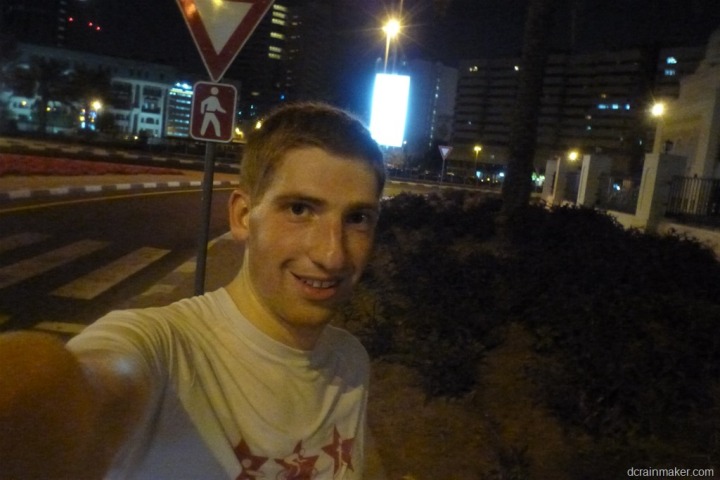 The next day in Dubai (Sunday) we spent the majority of the time at the mall.  It’s funny, living in the US I never got the whole ‘go shopping’ thing while on vacation anywhere.  But now living in France – I sorta get it.  Things are so much more expensive in France than many other places.  And more importantly, it just takes a lot more work to find what you’re looking for as stores are far more distributed (clothes, electronics, etc…).  We went to the biggest mall in the world (Dubai Mall) and took care of all sorts of things on the list.  Lots of walking, per Fitbit: 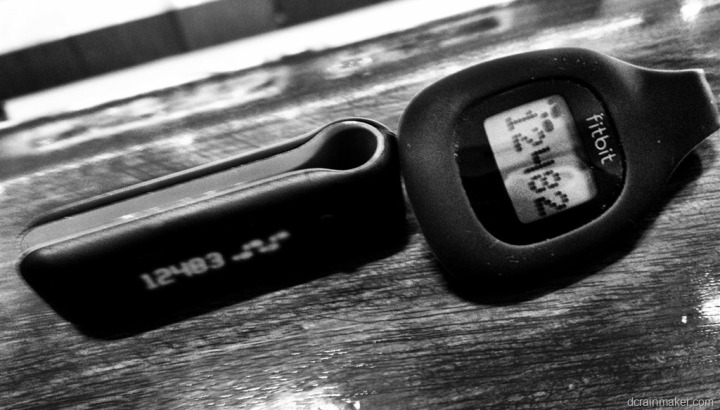 Meanwhile, I did want to very quickly share a couple of photos from this mornings run.  We ended up running in Safa park, which I’ve run in before.  It’s a popular and well known park here in Dubai with tons of runners.

Here are three quick things you won’t (likely) see anywhere in North America or Europe on a run: 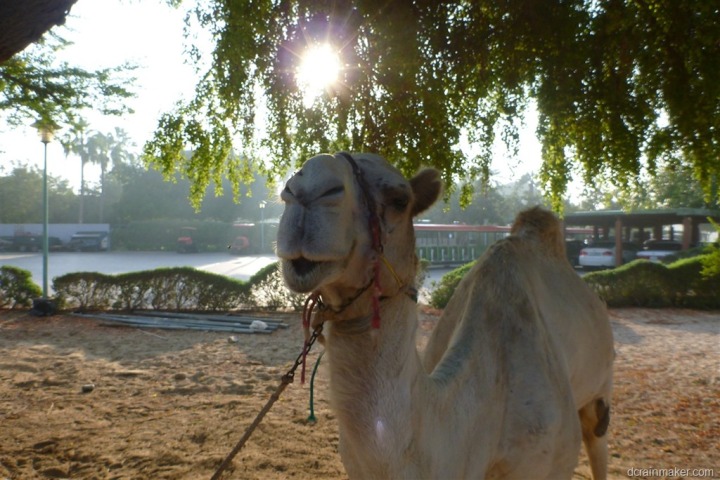 2) Women running head to toe in burqas. Very cool to see so many women out there running.  And even more so impressed in that they were fully covered in black cloth, while I was in shorts and t-shirt and dying in the early morning (wimpy) sun. 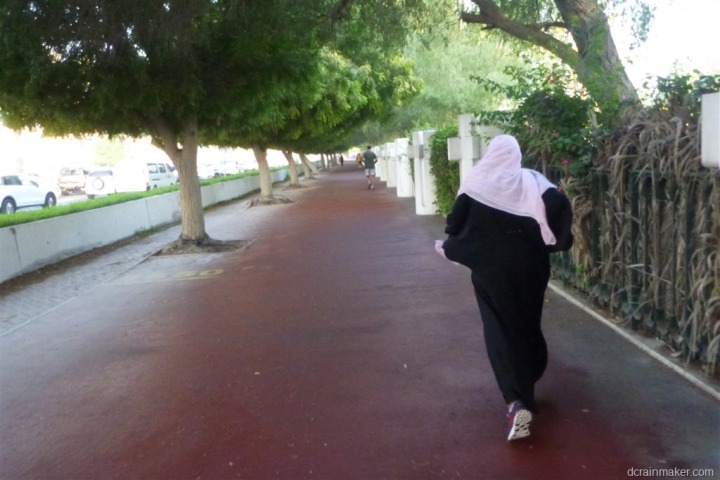 3) The tallest building in the world (left side). 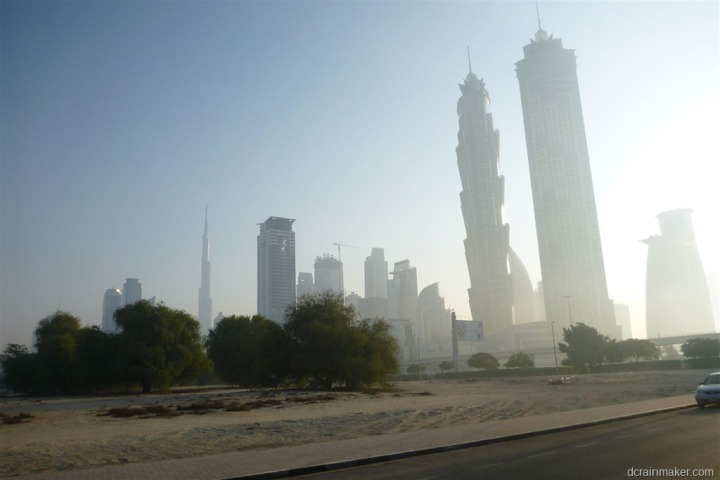 With that, next up – Muscat, Oman.  Hope everyone had a great weekend! Thanks for reading!

Psst! – I’ve been to Dubai a number of times before.  Here’s a quick look at some past posts:

There’s of course, plenty more pics from many other past trips here sprinkled in Instagram and Twitter – but the above should keep you entertained on this Monday morning.