This was effectively our last full day in Dubai, and quite full it was.  Without question it was the busiest day, first starting where every day starts – the hotel breakfast buffet.  I call this out only to note the presence of the Pork Bar.  Most non-Western establishments don’t server pork in the Middle East.  And those that do usually separate it out.  While we didn’t have any pork during our stay, I did love the little sign they made for the pork bar. 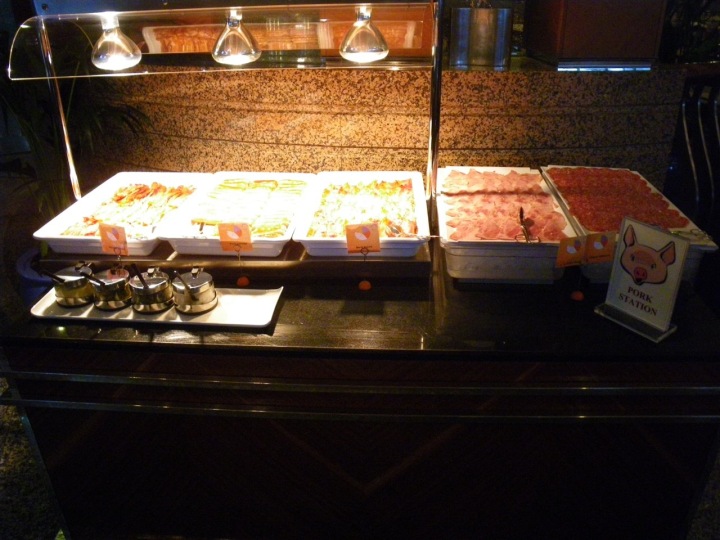 After breakfast we headed out into the dessert about 40 miles for some sand dune ‘bashing’.  Eventually this  would also take us to the ‘ski area’ that I talked about yesterday.  But we’ll focus on the other parts of the journey for today. 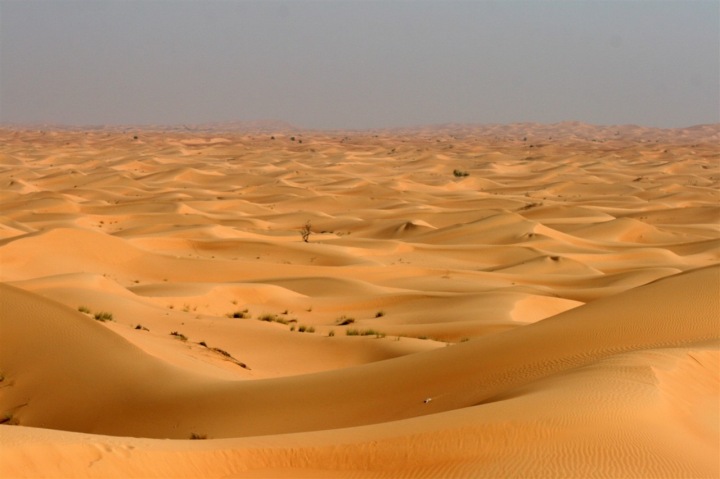 The desert goes for a long-ass way (yes, that’s a technical definition).  I wouldn’t want to get lost out there. 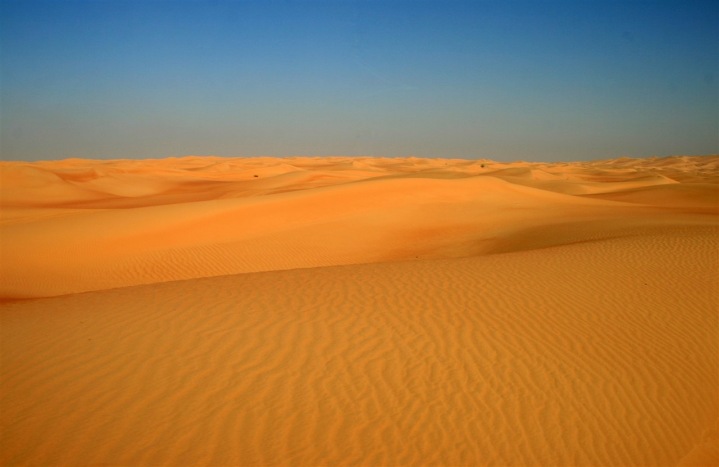 My brother got a particularly cool shot (below) with the sun. 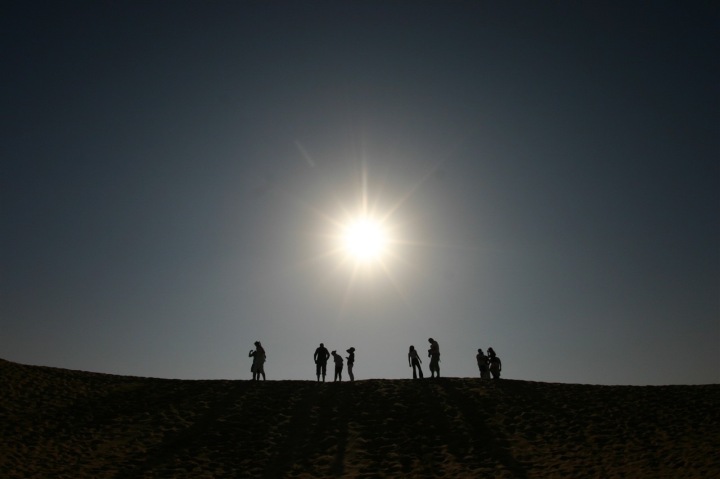 We ‘dune bashed’ for about 45 minutes, or roughly enough to have my stomach going in circles.  It didn’t make me sick, but a bit stronger A/C would have been nice. 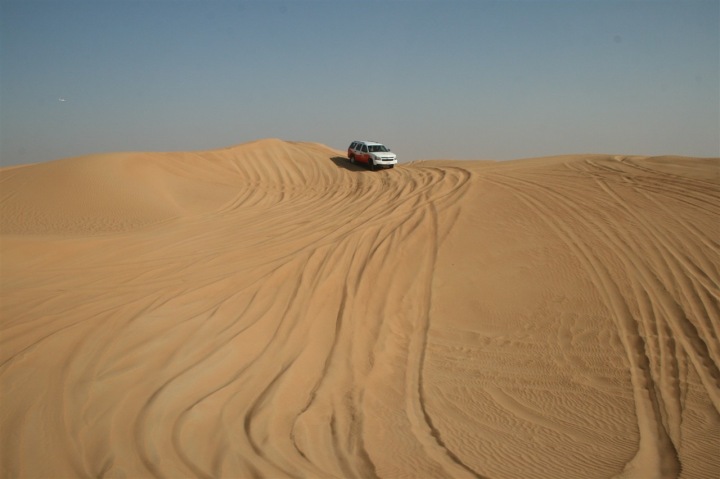 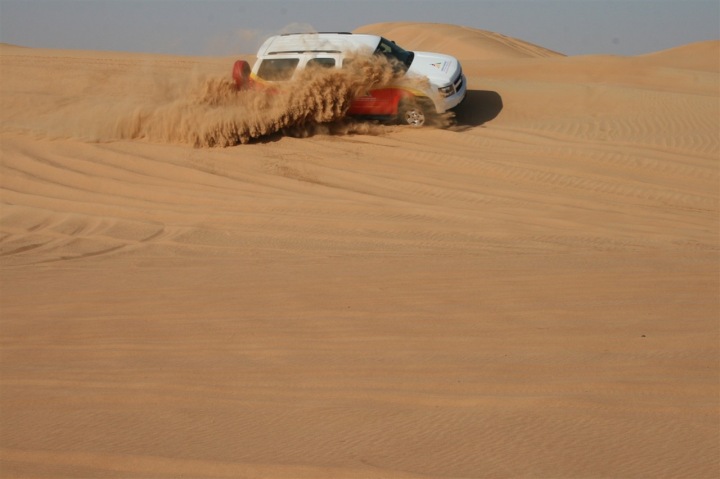 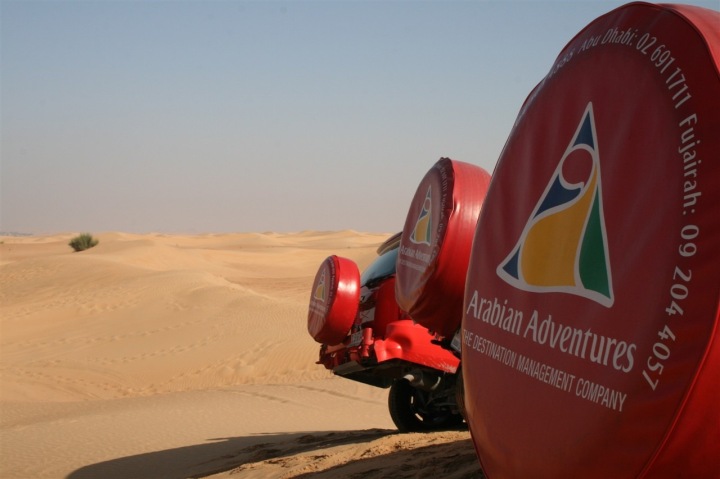 After an endless number of dunes, we met up with some camels – where I was happy to move onto a more tame mode of transportation. 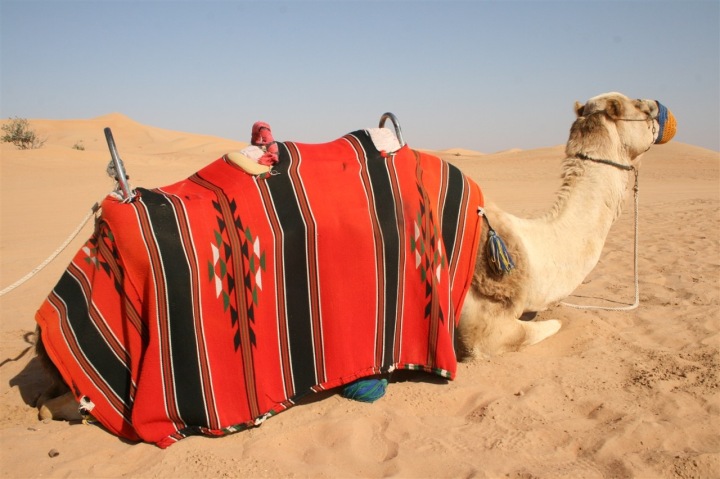 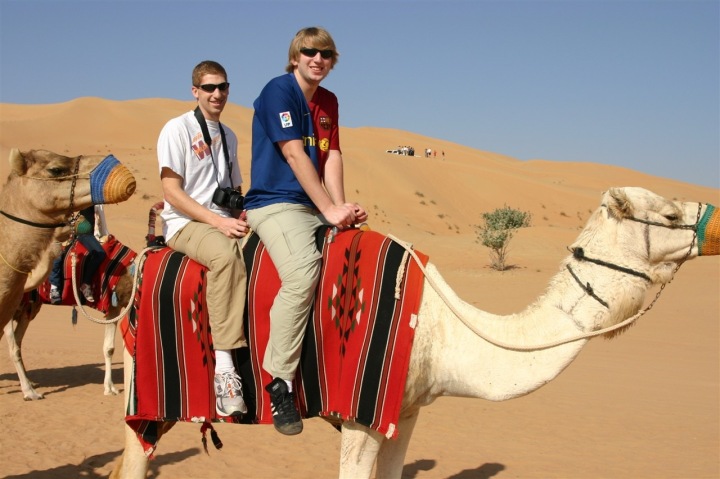 I don’t think our camel really wanted any part of this to be honest.  I loved how the handler was pulling it along.  The other camels were seemingly quite happy though. 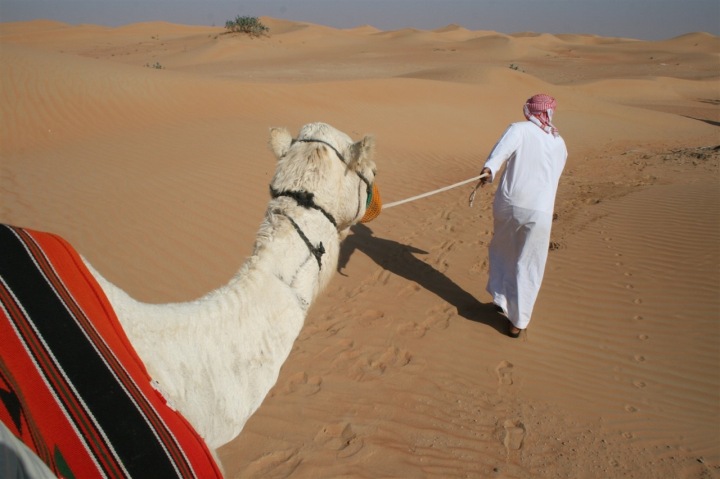 I’ll give props to the camel dudes out there, they knew how to work every kind of camera thrown at them – SLR, DSLR, point and shoot, you name it. 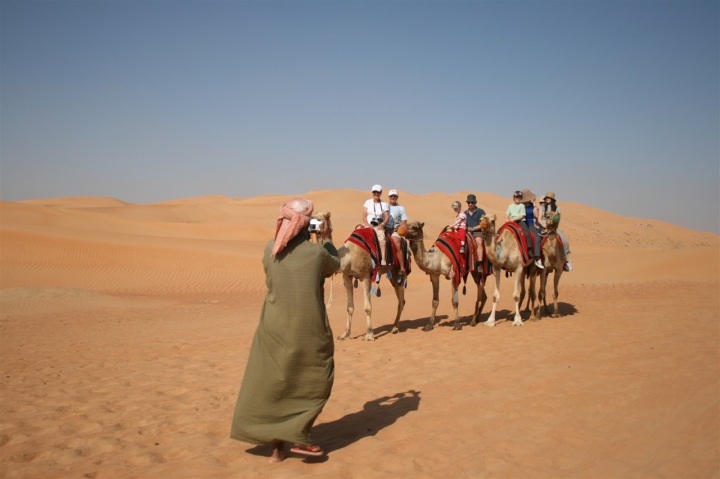 On the way back to the city I got a few good shots of the ‘Burj Dubai’ (aka Burj Tower), which is the worlds tallest building, albeit still under construction.  It stands 2,600 feet high currently and has another 100 feet to go.  It really takes being a number of miles away from it to understand how tall it is, as well as the other buildings near it.  In any other city those other buildings would be the sky-scrappers.  It’s twice the height of the Empire State Building. Yes. Really. 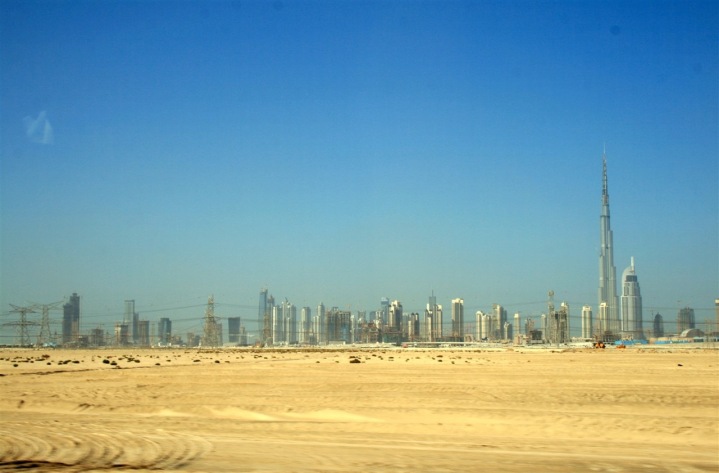 We swung by the other Burj on the way back – the Burj Al Arab – which is the most expensive hotel in the world – as well as the tallest.  You have to have special reservations just to step foot on the grounds – which is a small island out in the ocean.  Again, it may look short – but it’s over 1,000 feet high.  And the cheapest hotel rooms are thousands of dollars per night. 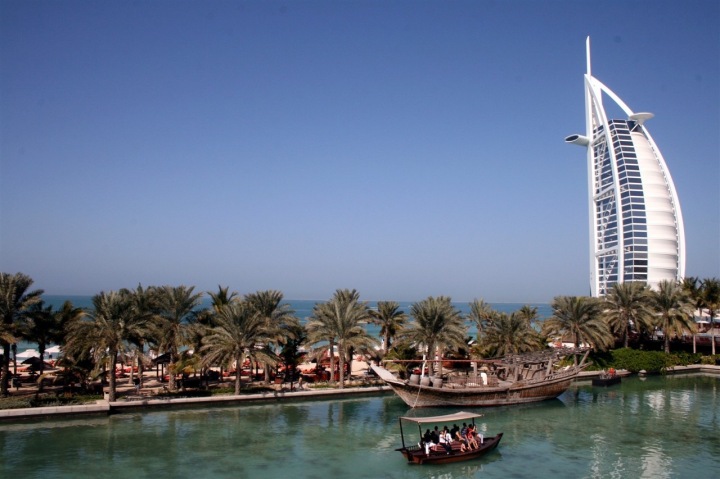 The circly thing up towards the top is a helicopter pad for guests to arrive.  And the long horizontal bar going near it is a bar/restaurant. 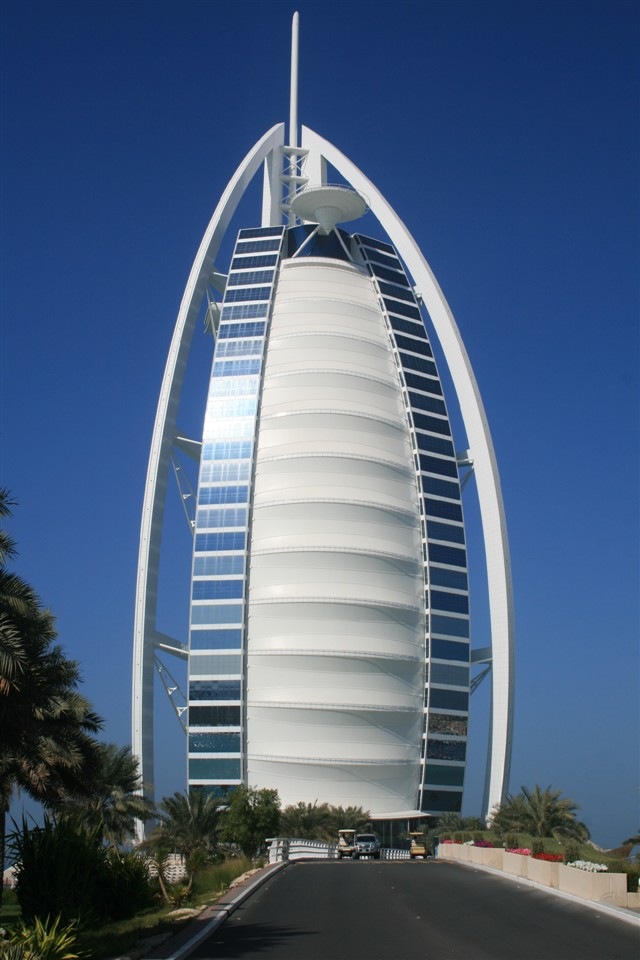 We had a bit of time after getting back to our less expensive hotel, so I snuck in a quick five mile 40 minute beach run in the sun.  Oh, and some more lazing around on the beach too. 🙂 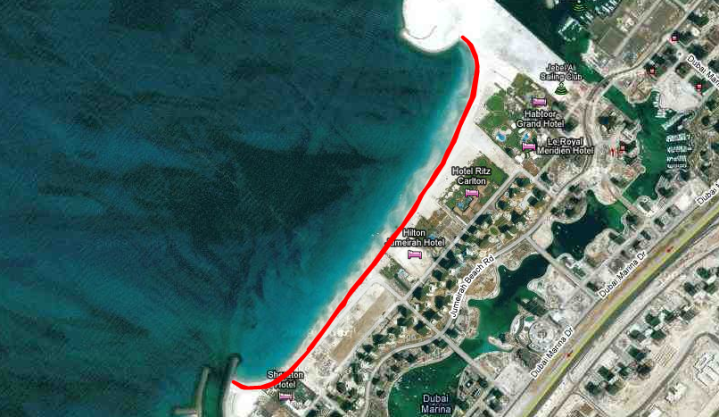 Then it was back out again.  This time to catch AC Milan’s open practice.  Apparently the team is training in Dubai for a few weeks, and with it comes a number of huge soccer (err…football) stars. 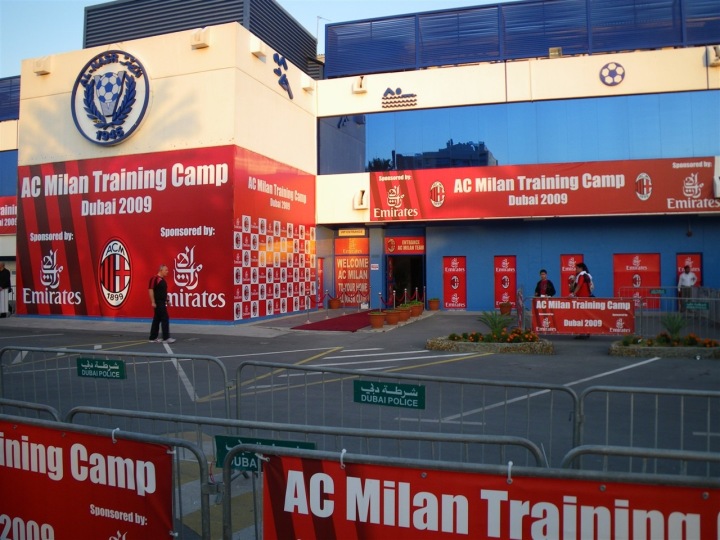 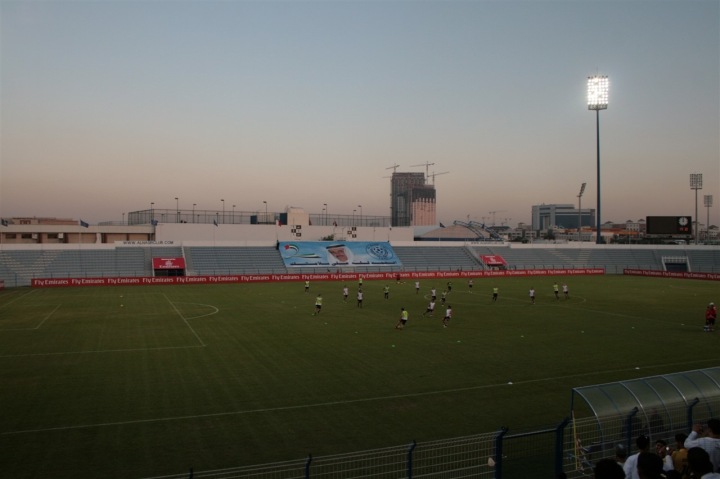 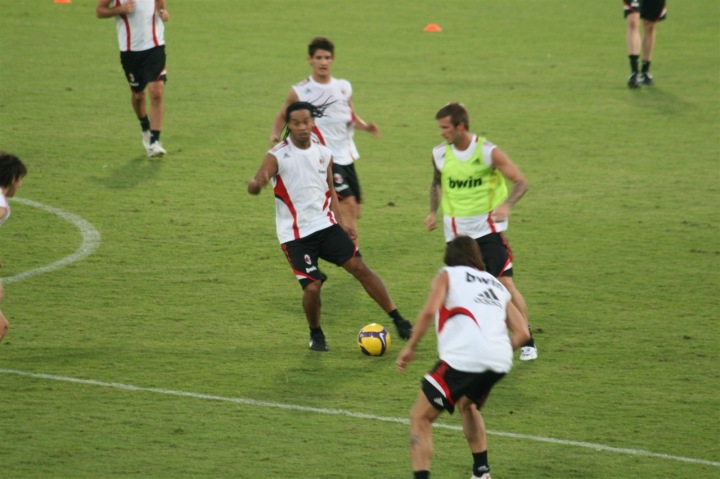 That photo above includes superstars Ronaldinho, Beckham, Pato and Maldini.  The best part was the event was free to the public.  Sweet!

Less you think they stop for prayer during this game….um..no.  Check out this little video I shot with the late afternoon call to prayer in the background.

I don’t know who the people are in the bottom of the picture, but based on body language (read: guards with guns) and watching them I think they were some royalty.  They greeted some of the players. 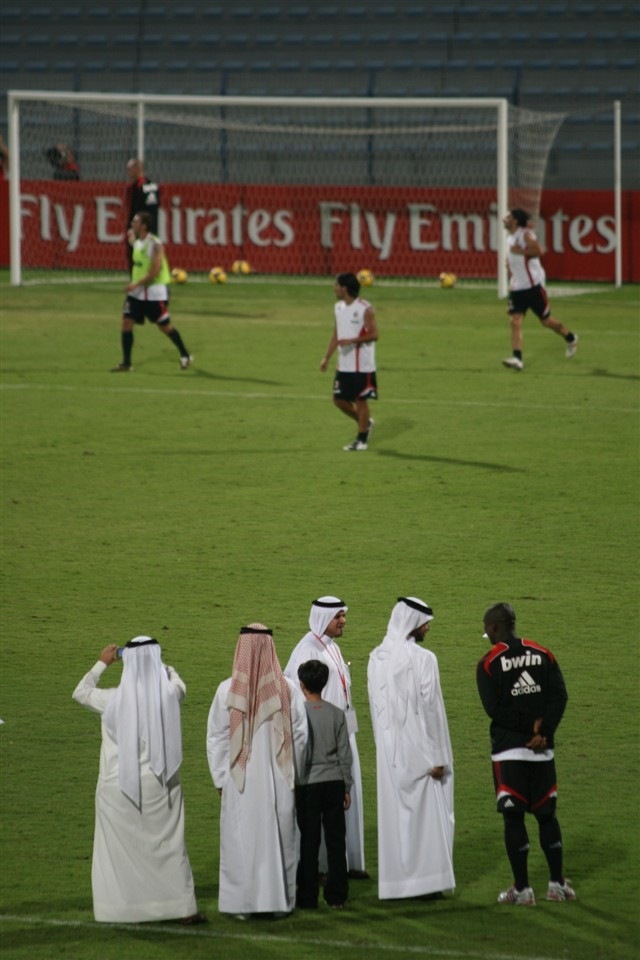 After the AC Milan practice we hopped a few miles away to a different stadium to catch a cross-country rival game between UAE (United Arab Emerites) and Kuwait.  Even better, this game was also free. 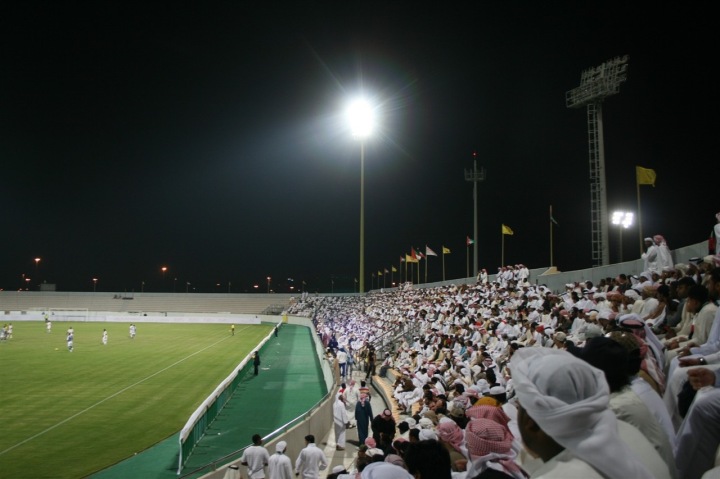 Shortly after entering it became apparent we had the irony of being both the only white and not dressed in white people around.  Although nobody noticed or cared.  It was refreshing actually.  All they cared about was football (yes…I said football). 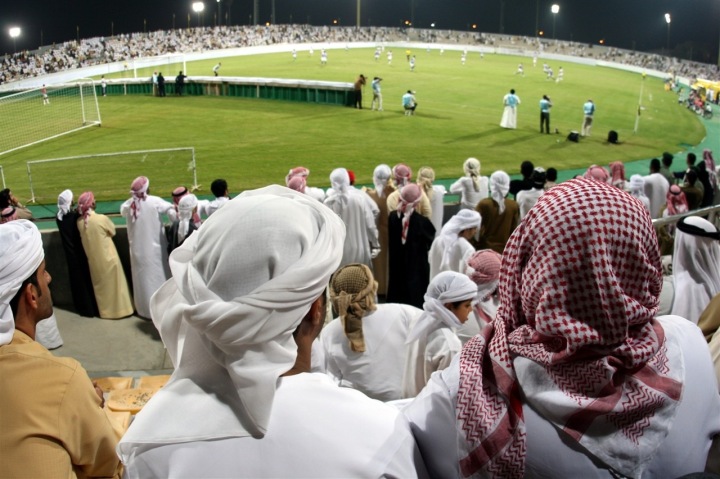 Just like anywhere else in the world they chanted, heckled and cheered at all the appropriate moments.  There was the usual single fan with a noisemaker device (a massive bullhorn).  I wish I had video if this dude rocking it out in Arabic.  One interesting differentiator was there was no scoreboard or clock.  You just had to kinda know.

Also interesting was that halftime coincided with the evening prayer.  A hefty chunk of the crowd flowed out of the stadium to the mosque which was effectively in the parking lot.  They prayed, and then came back in just as the game was starting. 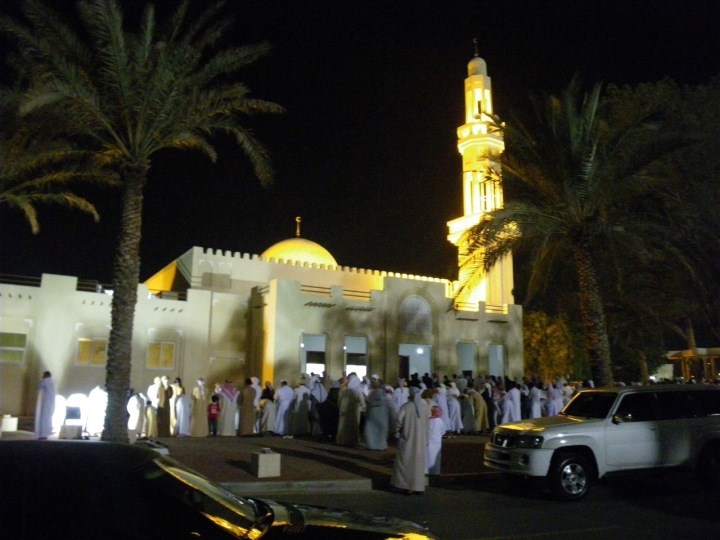 Also of note was that there was no food or beverages served inside.  Apparently the popular thing (well, only thing actually) was to eat sunflower seeds, a really scary inedible hamburger and a juice box.  Everyone had their little juice box.  Naturally I had to get my own juice box…and burger….and sunflower seeds. 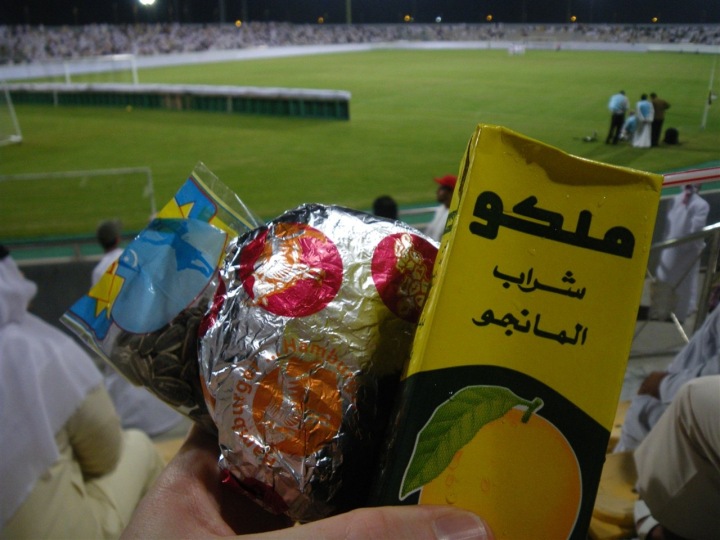 Ok…this day isn’t over yet.  Seriously.  At this point it’s 9:30PM.  We swing by the Emerites Mall again to eat dinner.  Which reminds me of some cool photos I took the other day I forgot get to post.  During lunch we happened to swing into some completely random and very non-touristy Iranian place to eat.  There were no menu’s, signs or prices.  The waiter/cook/owner person just asked if we wanted a bunch of {I have no idea} and we nodded our heads yes. 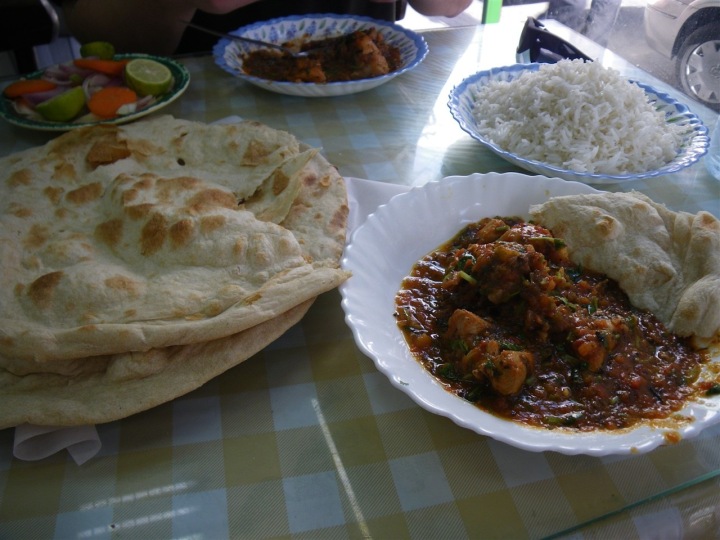 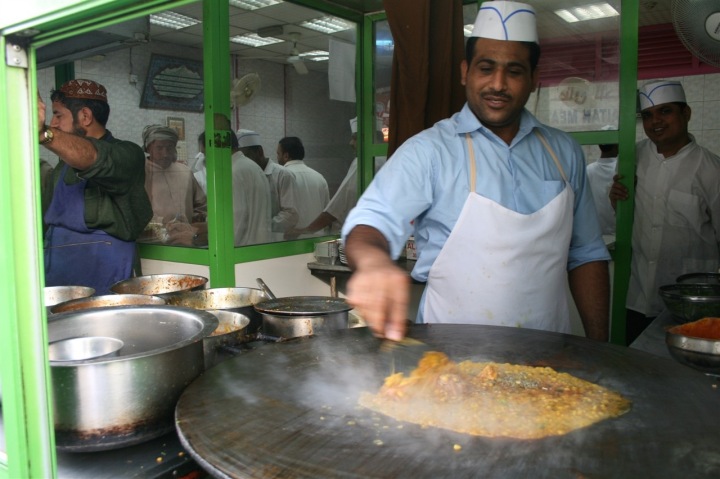 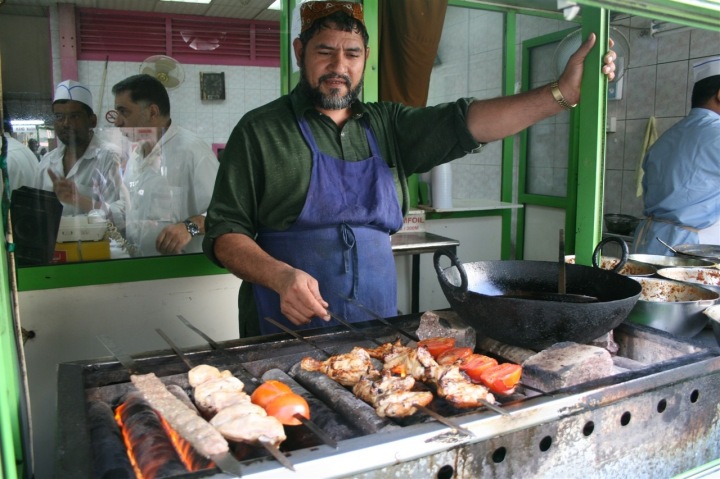 The food was pretty good though – and super-cheap.  It’s worth pointing out that we haven’t really found many places that serve native UAE dishes.  My guess is that because such a significant percentage of the population is expats (80%), the food tends to be geared towards those different cultures.  We’ve been eating a lot of Indian, Lebanese, Iranian, Turkish and Pakistani food.

We went back to the hotel and quickly changed into the suits in less than five minutes.  A world speed record. Then we grabbed a cab back to the Burj Al Arab (that’s the expensive hotel I mentioned earlier).  With a bar reservation confirmation number in hand we were let through the pearly main gates and out onto the island (of luxury). 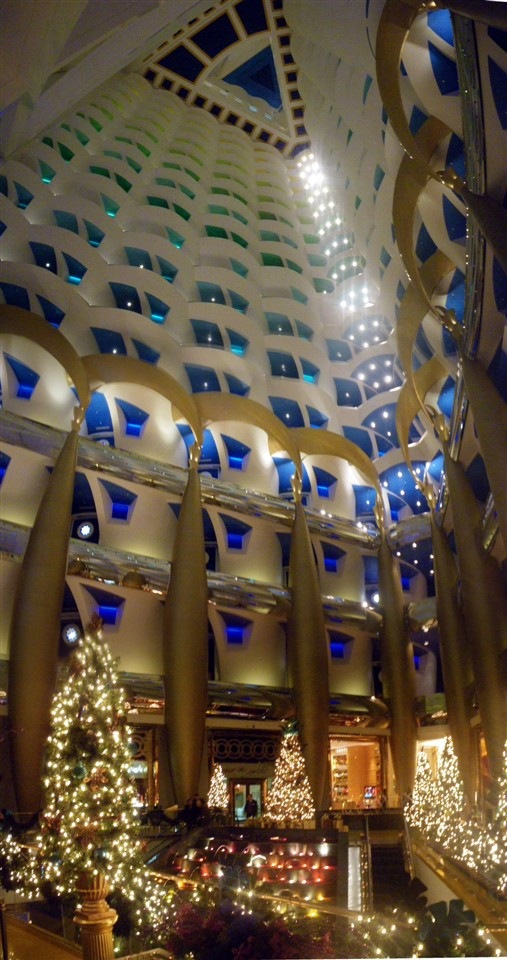 Once inside the places oozes in money.  Although perhaps more impressive is the people wandering around.  It feels like you’re at the Academy Awards with people dressed to the nines, some quite risqué by Middle East standards.

We took the glass elevators up 1,000 feet to the Skybar, which overlooks..well…everything.  The pictures are fuzzy – because it would have been considered a solid faux pas to use a flash up here. 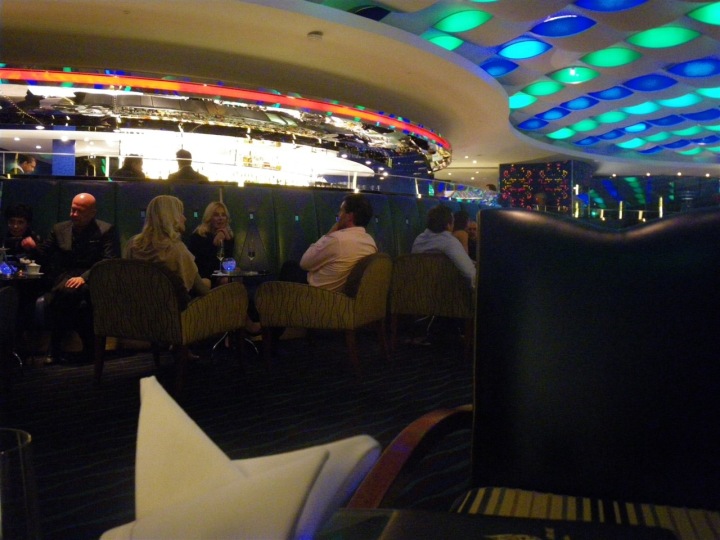 On the menu, a $8,000US drink (roughly divide prices by three to get US dollars).  Our reservation required us to spend about $70 on drinks…which…it turns out wasn’t too hard when the cheapest glass of wine is $50. 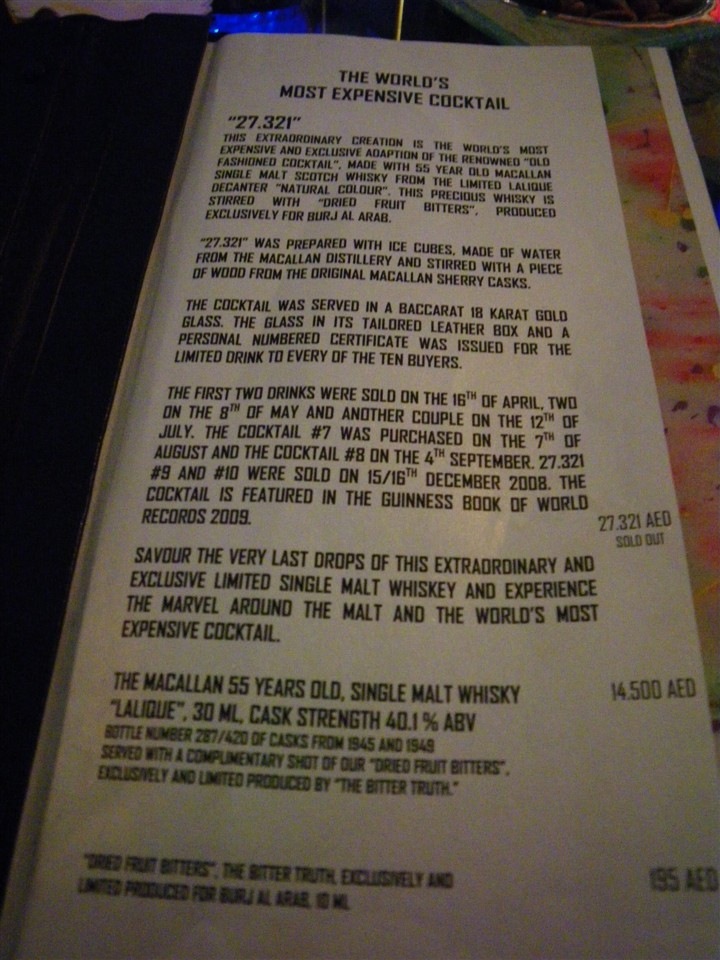 I did love this little section on the next page.  Which – I believe roughly translated means: If you have to ask, you can’t afford it.

Overall it was a very cool experience, but the service at the bar was quite lackluster given the posh standards.  My brother pointed out that the bartenders wouldn’t survive 5 minutes in a busy bar in any metropolitan city. While reading the Wiki article about the Burj Al Arab, they had a quote that probably best summed it up: “…both the hotel and the city, after all, are monuments to the triumph of money over practicality. Both elevate style over substance.”

Here’s a photo we took down the lobby (sorry for the bad quality). 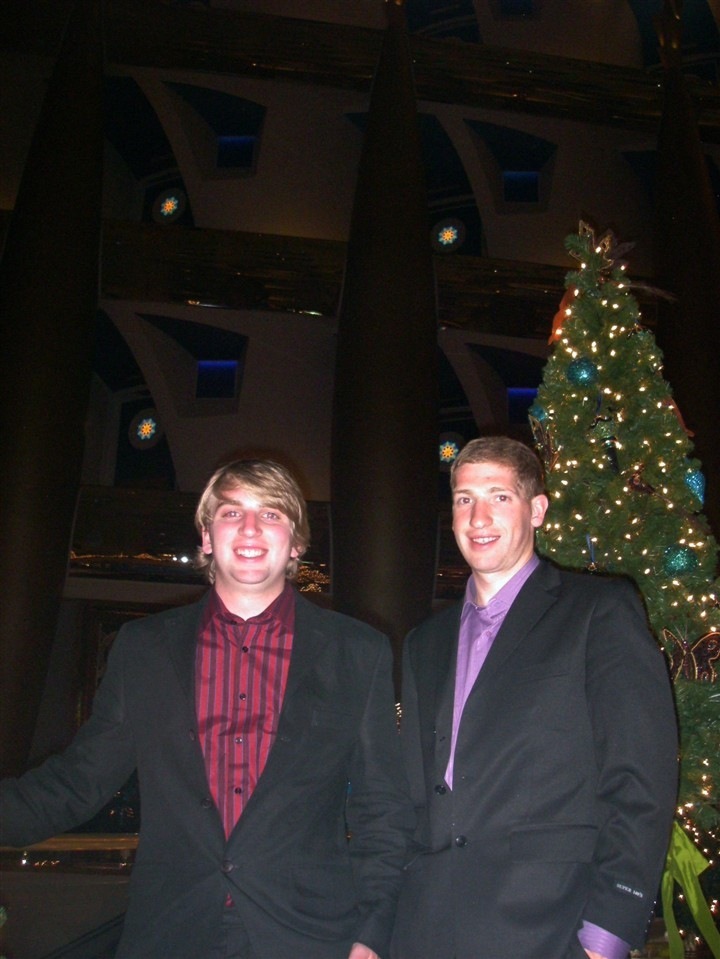 And with that, we’re off to Egypt!  In fact, by time I post this we’ll be ringing in the new year within sight of the Pyramids.