It all started like any other international arrival.  Our plane from Dubai descended under a cover of darkness to land out at a remote stand at Cairo International Airport. 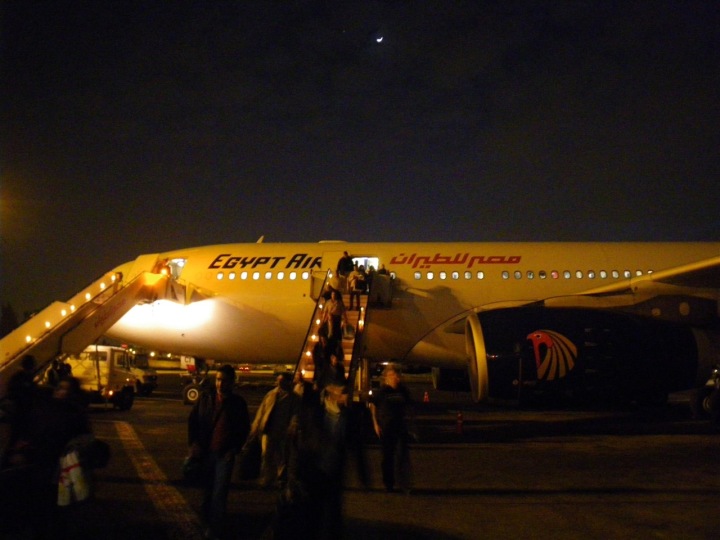 However, the first sign of things perhaps not going as smoothly would have been at the baggage claim.  It decided to break while delivering bags.  So we waited about an hour for that.

Then we wandered out to find a taxi to the hotel.  Except there was no taxi stand, and certainly no metered taxis.  While there was a sign pointing you to a taxi stand, it merely pointed at a road.  After considerable hounding, we relented to one of the many persistent taxi drivers…and his car from many a decade ago. 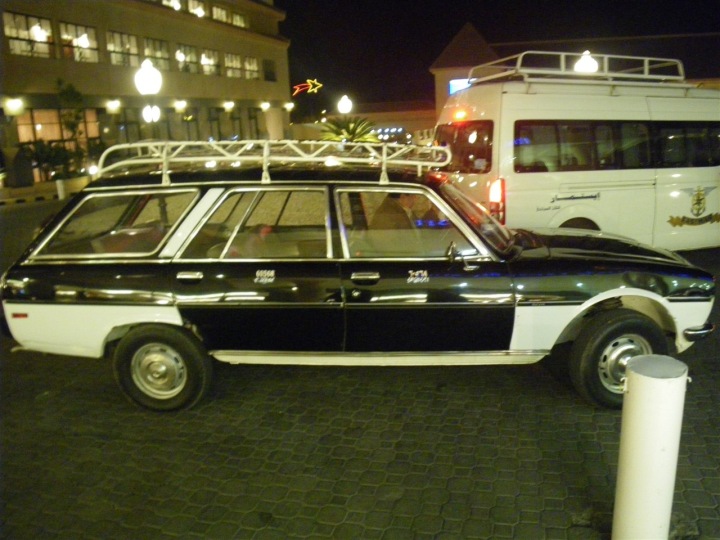 Arriving at the hotel though things starting looking up again.  We got upgraded into a palatial suite of a hotel room…well, actually, multiple rooms and bathrooms.  Sweet!

Despite being New Years Eve, we were both exhausted and Egypt doesn’t really celebrate the 1st anyway (they celebrate the 7th), so we feel asleep far before midnight.

Waking up this morning we were excited to head out to the Pyramids.  After all, they are one of the seven wonders of the world, and apparently a sight to behold.

We again braved the chaotic traffic and another 1960’s taxi, heading past all sorts of interesting things – reminding us that we were very clearly in a 3rd world country. 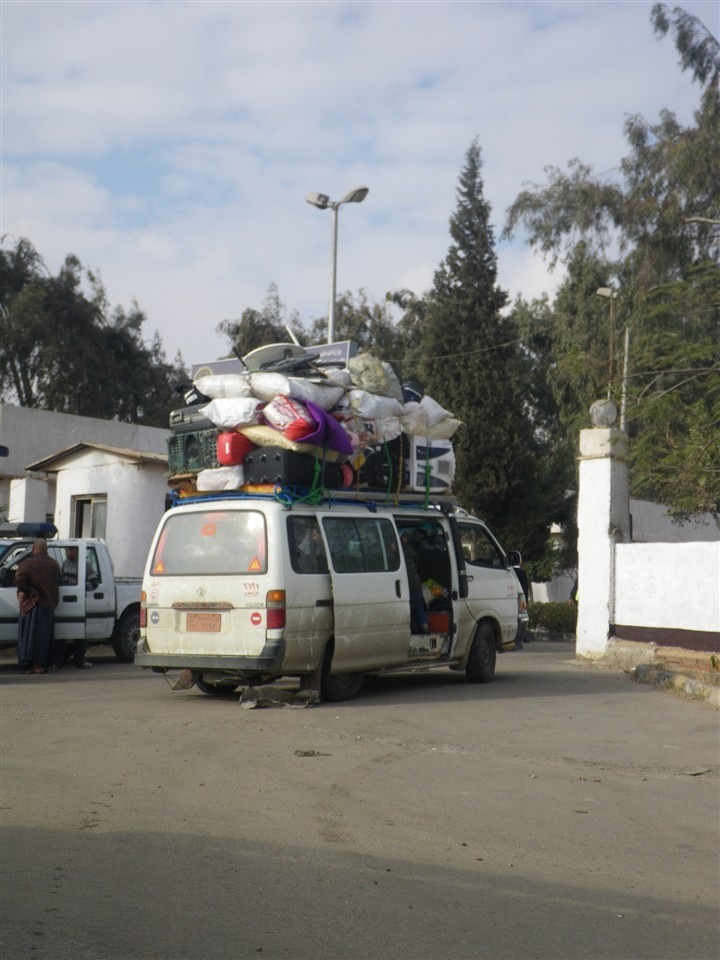 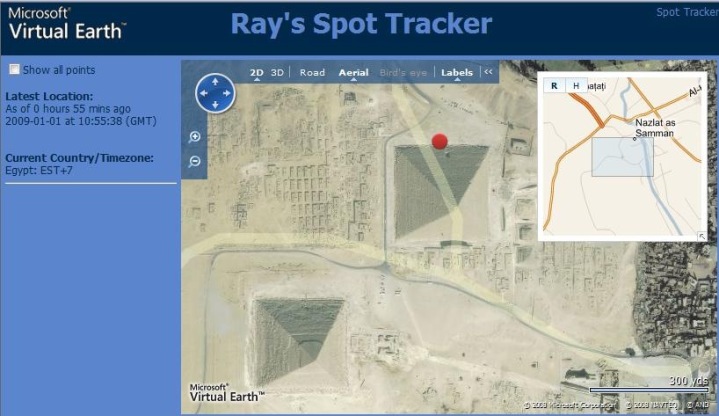 (I happened to take a screen shot of the little live tracker this afternoon, showing us at the Pyramids, it should be cool tomorrow as we slowly drive across the country)

Finally…we arrived and bought our tickets.  One ticket to access the plateau (essentially the grounds), and another ticket to go inside the Great Pyramid. 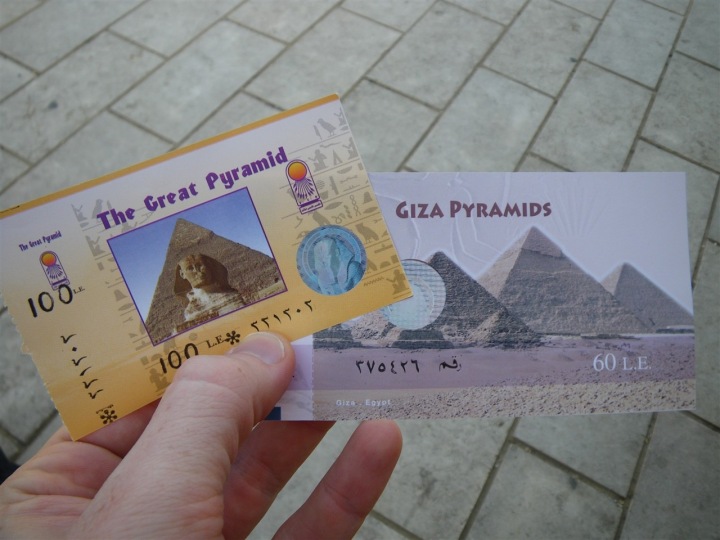 Then we headed on in to the grounds.  Within about 50 feet we were approached by a man that was cleanly dressed and asked for our tickets.  He sounded official “I need to see your tickets please”.  So we gave him our tickets and he said to follow him.  At this point we started to wonder – why would we follow him to the pyramids?  Nobody else was following anybody else.  A couple seconds later we rescued our tickets back, told him no and bailed.

Over the course of the next 100 yards or so, we got asked for all sorts of things, and kept saying no.  We decided we were pro’s at this now.  Then along came this guy next to some police folk.  He kept being pleasant and said he just wanted to show us where to take a picture…before we knew it though we were getting our picture taken and being pushed onto a camel.  He said it was nothing – ‘free’ – all while just a foot or two from some police.  Well…turns out not so.  At this point he had our cameras, and we were on his camels (moving).  Our requests to stop were getting generally ignored.  So…I decided I was going to depart the camel.  That got their attention.  Apparently they don’t like mid-flight departures.

Now they wanted money. Money?  You’ll be lucky if you get out of here without me putting my foot up your ass.  Let.me.off.the.camel.

Nope, money first.  I then said I wanted my camera back.  At this point I’m virtually about to jump off the camel and at him.  He said again “No camera until money”. 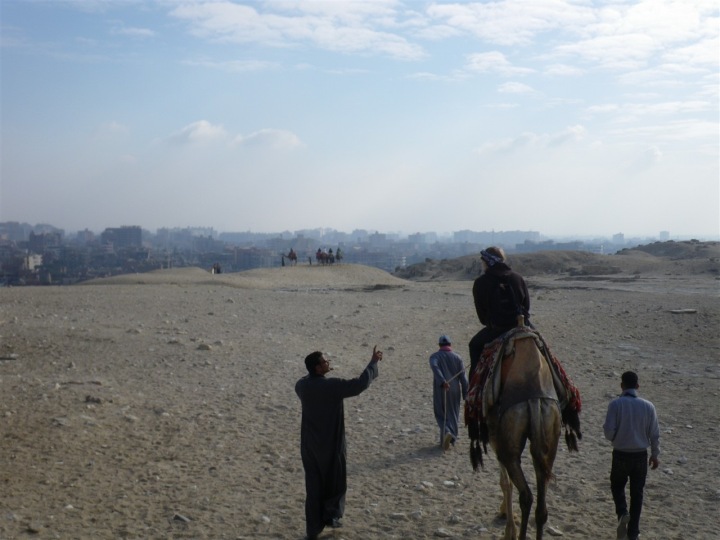 I then looked at him in an expression that clearly said “Don’t f- with me…I will kick your ass” (given his size, I felt reasonably confident I could) and then in that same tone said ‘I guarantee I can run faster than you, you won’t beat me’.  Apparently in his little mind he decided that I was dead serious (and I was, I would happily have chassed his ass all over that damn plateau, I needed to get in a run anyway).  He let his camel down so I could get off and eventually gave me my camera back.

Lesson #2 learned: Tell everyone to f-off in a voice that conveys to them to f-off.  They’ll follow you for hundreds of yards unless you clearly deliver the f-off.  This new technique proved immensely successful. 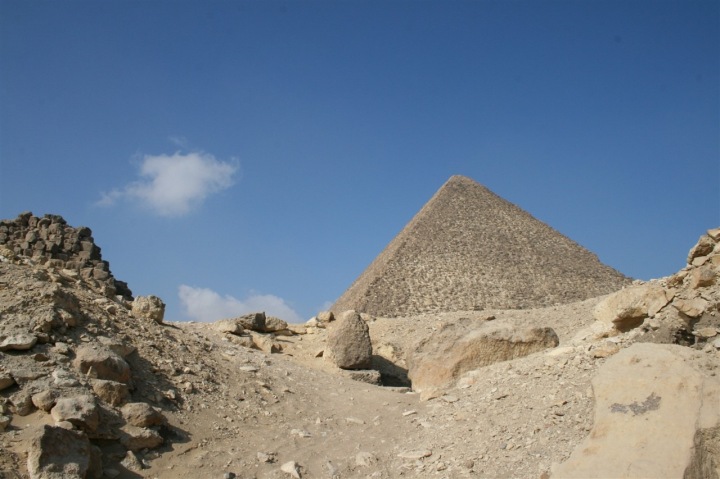 Shortly thereafter my brother and I are taking photos after ascending some nondescript pile of dirt and rocks near the Great Pyramid (the pile pictured above).

A police officer starts yelling at us to get down.  Odd we thought, it’s just a big pile of dirt.  But we assume we must now be on some 4,000 year old tomb or something.  So we scurry on down and he shows us a different pile of rocks to go up on.  So we do that and he motions to give him the camera to take our picture.  Nice we think – he’s going to be helpful.  He takes some pictures and we start to head out.

It’s at this point he wants money.  He wants cash for his troubles.  He wants 40 pounds (about $8US).  He then starts bargaining.  You are crapping me?  This.is.pathetic.  They are just as corrupt as the others.

The officer is pictured below.

Lesson #3 learned: Tell police officers to f-off too (this would prove true numerous times at the site). 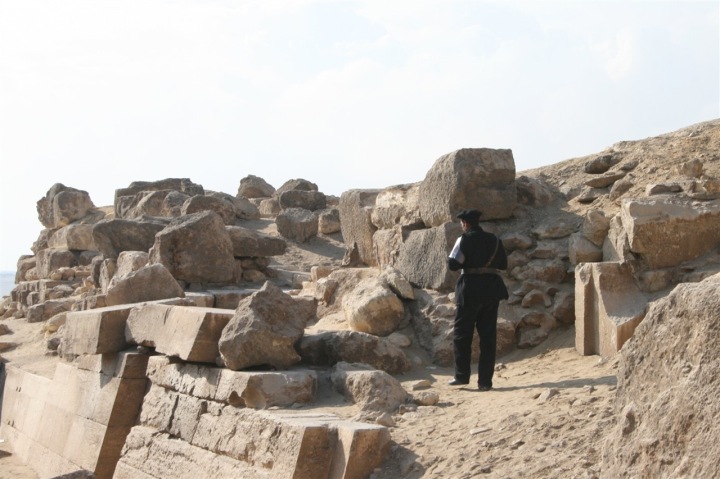 It’s at this junction we determine our best option is to simply tell everyone to f-off and we start walking out into the desert to try and get some long shots of all the pyramids. 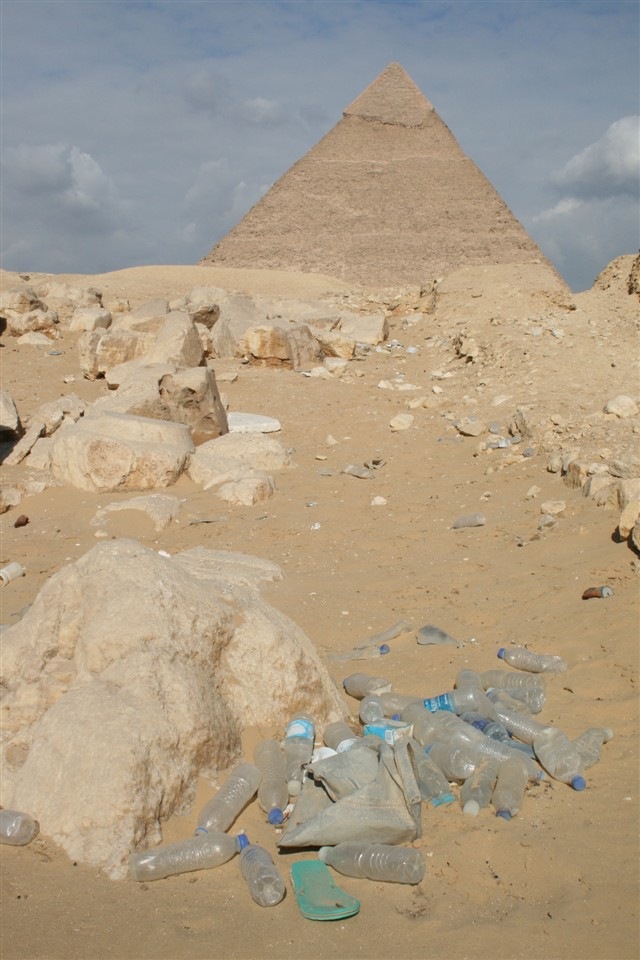 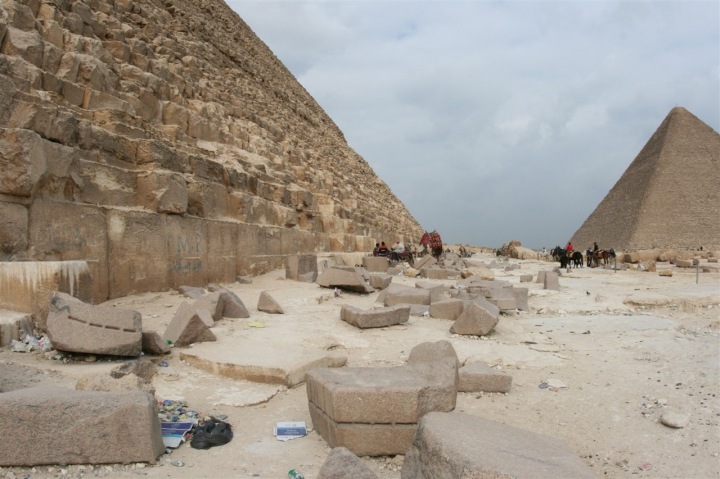 Of course, to do so, you have to cross the millions of piles of crap.  Yes, crap – camel and horse – that are just sitting everywhere.  And you have to cross the garbage piles everywhere.  That’s because there are no garbage cans.  Not a single one on the entire plateau.  And you have to apply lessons #1, #2 and #3 roughly every 30-45 seconds.  Seriously.  You get hassled that often.  The workers don’t care – in fact, they’ll happily just relieve themselves on the side of the Sphinx. 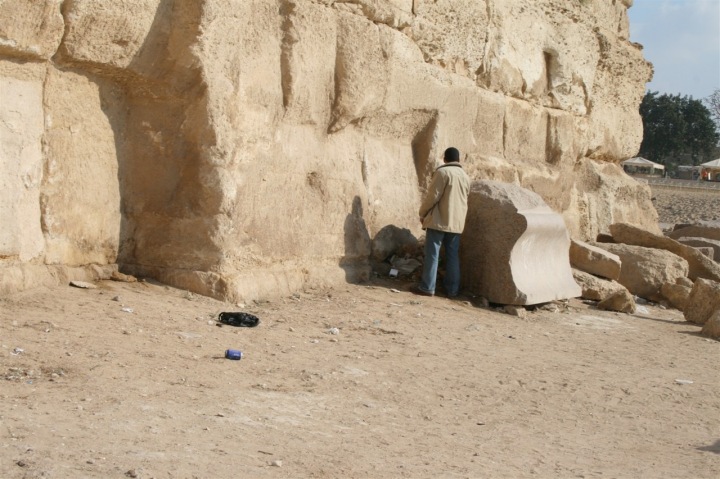 The site in general is a mess.  Not because of the wear and tear of a few thousand years.  Nope – it’s because the Egyptians simply don’t care.  For my whole life I’d always heard about conversation of these ‘great sites’, and how they needed to ensure they were there for generations.  Well – that’s a bunch of BS.  There’s no conversation, no care, and certainly no money spent.  Despite the $30-50 million per year the Pyramids likely makes on entrance fees alone to the government controlled site, it’s clear not even a few thousand is spend on upkeep.  It’s too bad one can’t revoke the Egyptians license to host the pyramids, because if you could – they should lose it for a century or two.  Give it to a country who might actually at least pretend to take care of it.

Of course, the reality is that tourism boards go to great pains to  make it appear like the site is beautiful and full of happy faces.  And with a few tricks of the lens, you can do just that, as seen below from some photos I took. 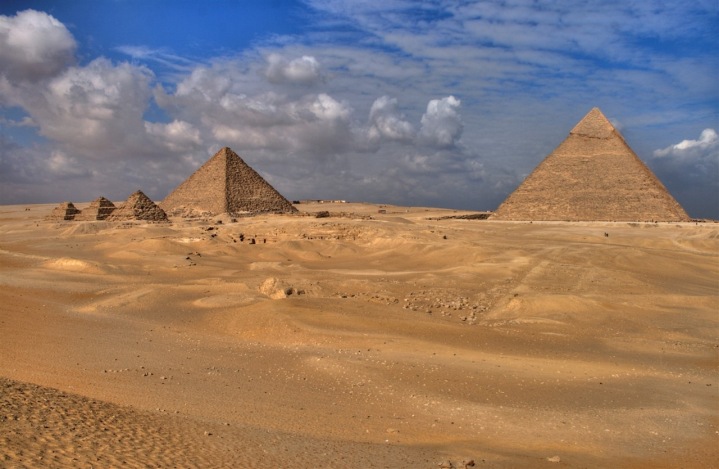 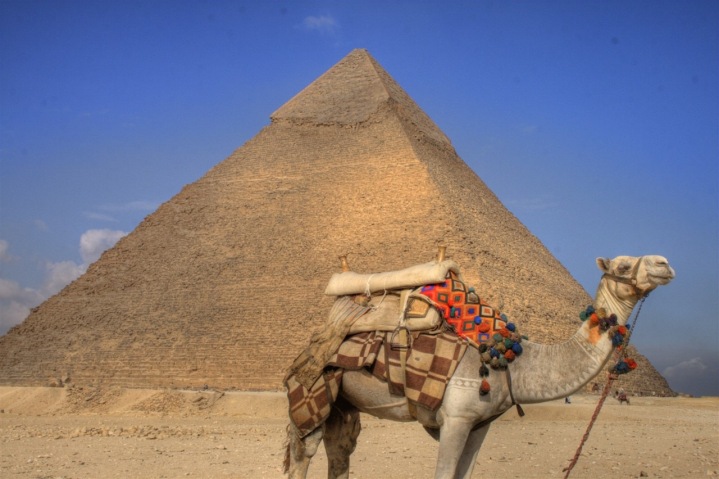 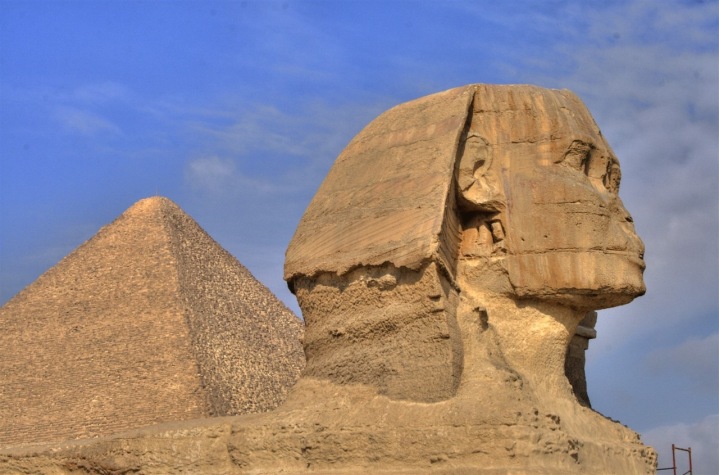 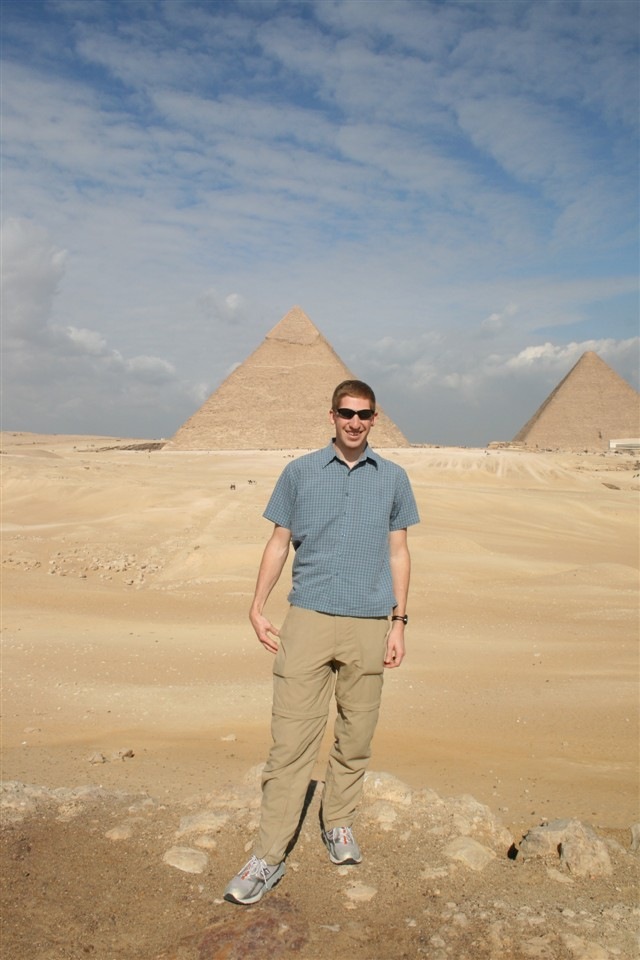 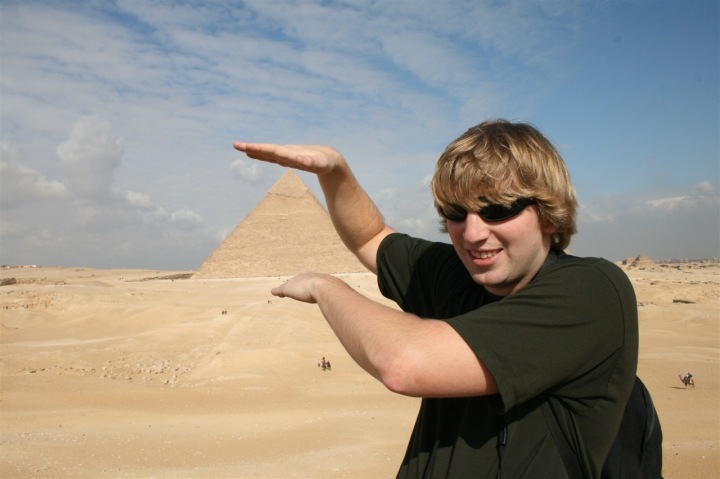 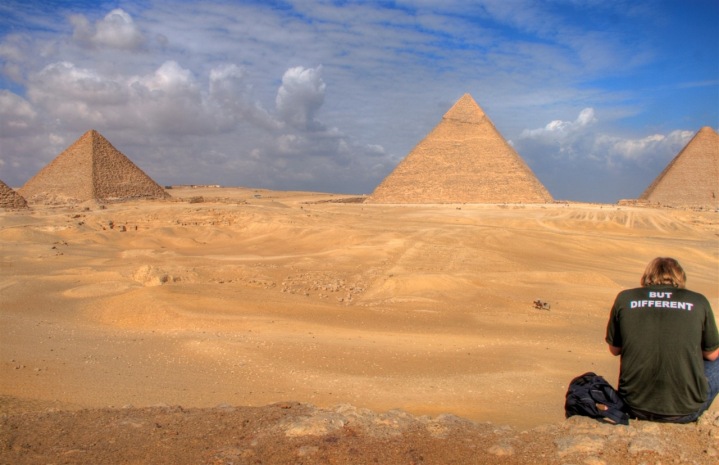 To be fair – as my brother and I noted, once you get far enough away from the Egyptians*, it was actually a pretty impressive and cool site to be around.  The size of them is amazing, they’re huge and are seen from miles around like skyscrapers on a skyline.  Even at night the silhouettes are visible from a dozen plus miles away.

*Of course you’ll note above I use the term Egyptians specifically.  It wasn’t the throngs of tourists that was a turnoff.  Nope – the tourists were notably just as upset as we were.  We saw a number of similar yelling altercations going on.  If you cleared the site of the locals and garbage, it would be quite nice.

We did go briefly inside the Great Pyramid.  I’ll save you the mind-boggling cluster that was (and the utter letdown once you were inside).

Later tonight we went back to the site for the Light and Sound show.  While somewhat Vegas-esque in nature, it was actually fairly cool and impressive.  Here’s a few more shots I took. 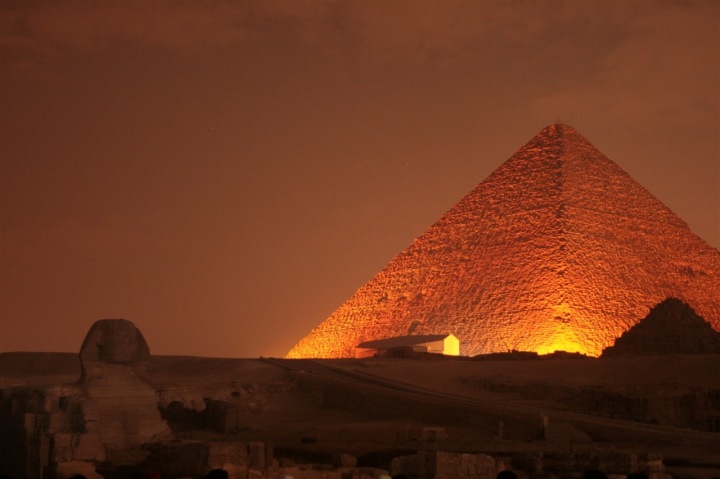 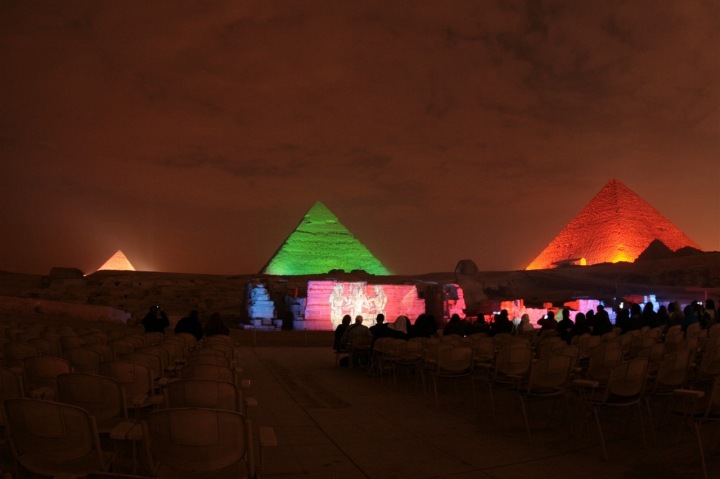 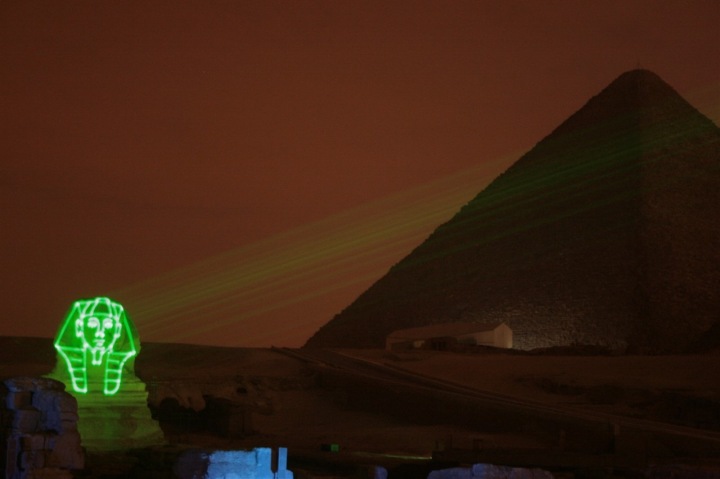 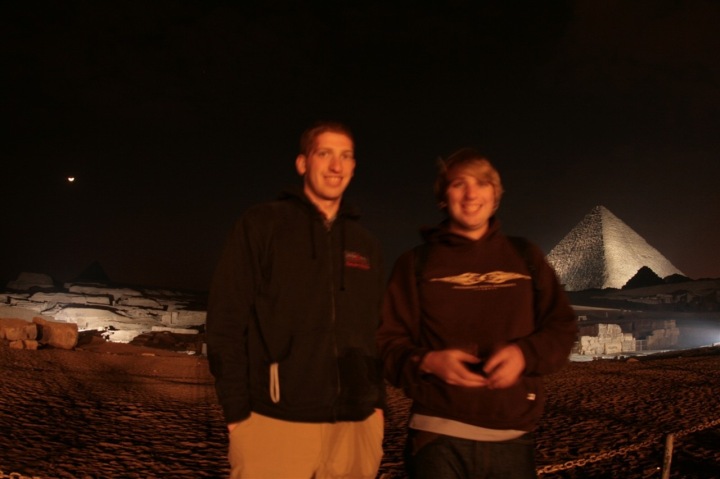 Based on today, we’ve decided to alter our plans (which was to stay here in Cairo for another 3 days).  We’re instead renting a car, and driving as far away as possible – about 5 hours – to the Red Sea, and going scuba diving instead.  Hammerhead sharks here we come.  Sweet! 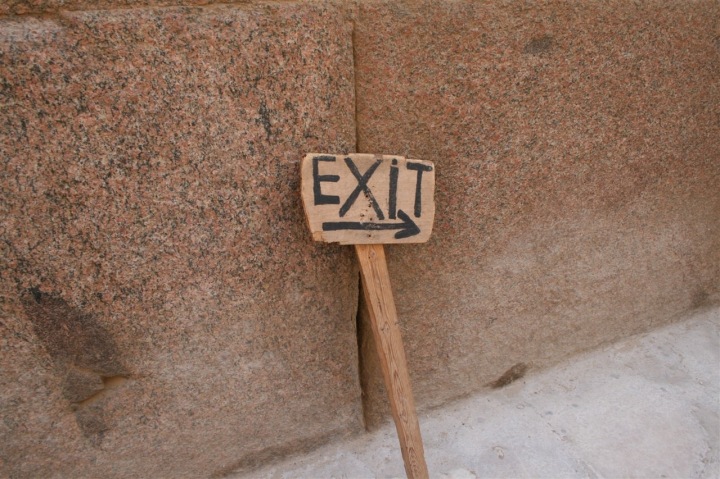