The Bricks: An inside look at my weekly brick workouts

This seasons mid-week brick workouts started quite a while ago, probably about two or so months now that I think about it.  Technically speaking I actually have two brick workouts a week.  The second one attached to my long ride, but at the moment the run off the bike on that workout isn’t nearly as intimidating, given it’s only about 30 minutes long, and builds in intensity (albeit right after a long TT on the bike). Instead, it’s the Wednesday brick that keeps me on my toes.  No pun intended. It starts off with a 32 minute ride on the indoor trainer downstairs (bike).  On the surface, that doesn’t sound terribly bad really.  After all – how painful can 32 minutes really be? And there’s some truth there.  As always on any indoor trainer ride, the first 10 minutes are a warm up.  From there it slowly picks up the cadence as I go through a 5 minute pyramid topping out at 125RPM, one minute per 5RPM jump.  125 isn’t too bad, as we routinely do sustained spin-ups in other workouts between 150 and 200RPM. After those are finished I’m pretty well warmed up and ready to increase intensity.  From here I go into a simple increasing intensity set for the remaining time on the bike, building on both length (time) and intensity (watts/HR).  This usually tops out somewhere in the 280-300w range with the last chunk being five minutes long.  The goal here isn’t simply ‘all I can sustain’, but rather a very controlled Z4B heart rate.  The wattage is controlled via the CompuTrainer, but I’ve done this easily on a standard trainer simply by modifying either resistance or gearing. 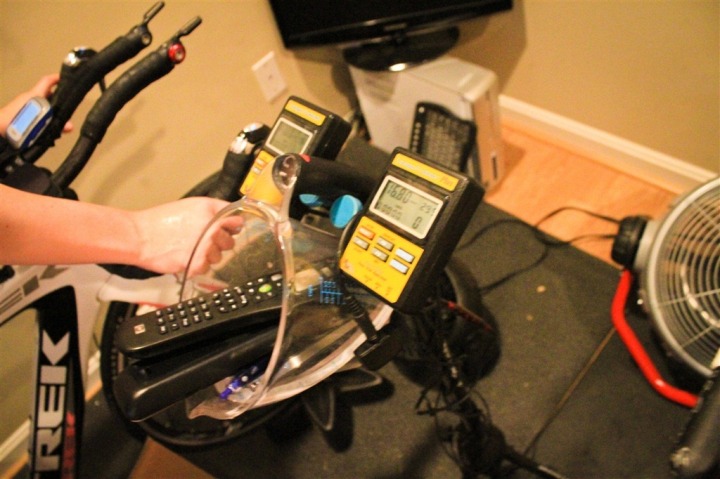 After that, it’s time to get to the fun part…the run!  When I’m feeling forgetful I scribble it down, though realistically I’ve long since memorized it.  Sometimes though I get two very similar run workouts mixed up, hence the reason I write it down occasionally. 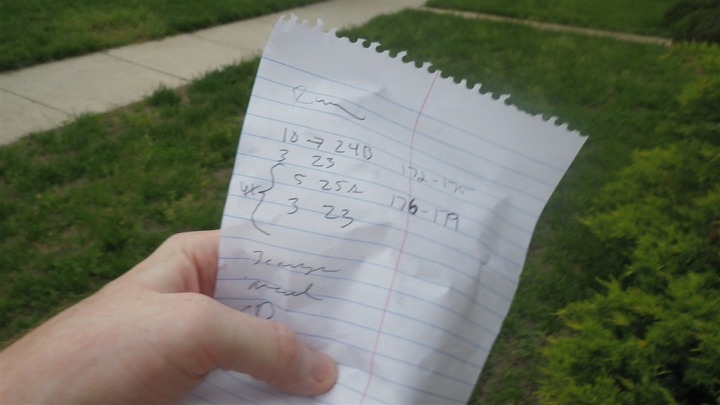 The run is where the bulk of the 90 minute brick workout lies.  There isn’t really any rest coming off the bike, it’s straight into a gradual build to a Z4B heart rate – or about the race pace for the first portion of a 10K race.  Not too hard, but ‘pushed’. This is the portion of the workout where the birds in my head are still chirping…or as is recently the case, the new little geeselings: 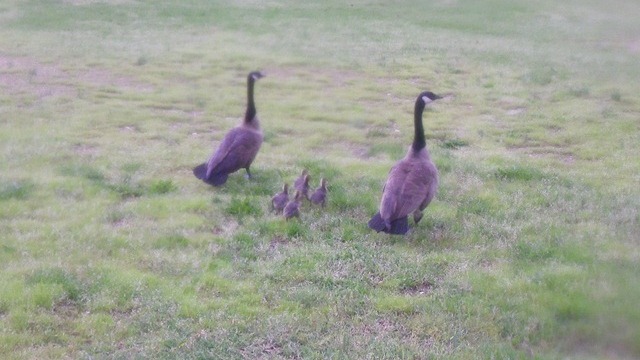 With the geese behind me the next portion affords me a brief ‘break’ – about 3 minutes at Z3 HR, or roughly an initial marathon race pace. You’ll note that this is still pushing along – it’s not like I’m getting to walk at this point (those days are long gone!). After the break the main sets commence.  These are repeating, and fairly straightforward.  The ‘work’ portion of the set starts at 5 minutes. Sometimes its longer than that, but 5 minutes is the minimum.  It’s done at a much more intense HR, so I’m probably just barely faster than 10K race effort.  In the winter that’s somewhere between 5:45 and 5:55/mile, and during the warmer months it’s about 15 seconds slower a mile. As I’ve mentioned in the past, I do these looped around a small pond, merely because I want them to be repeatable week after week, season after season.  Very easy that way.  Additionally there’s a bathroom and water fountain at the start/end of each lap – making it ideal for refueling…or, uhh, unfueling. 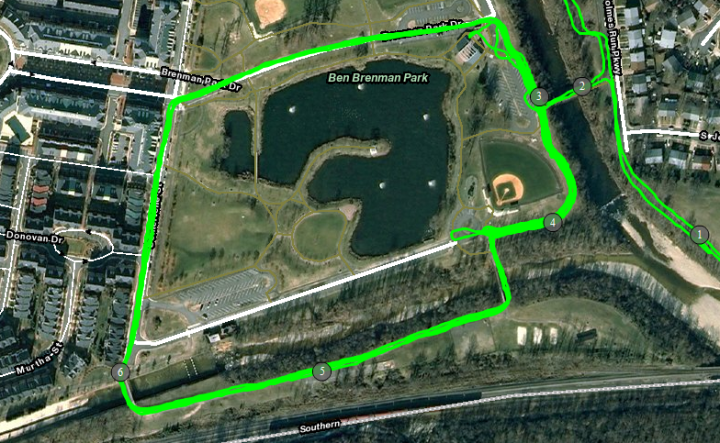 I should point out that I do these workouts pretty much rain or shine, such as the case of last week: 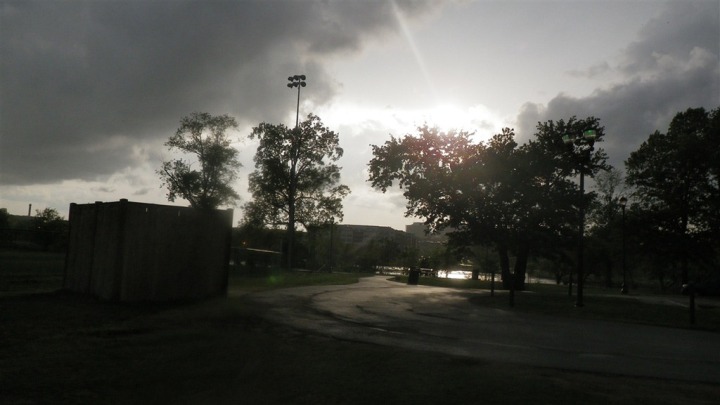 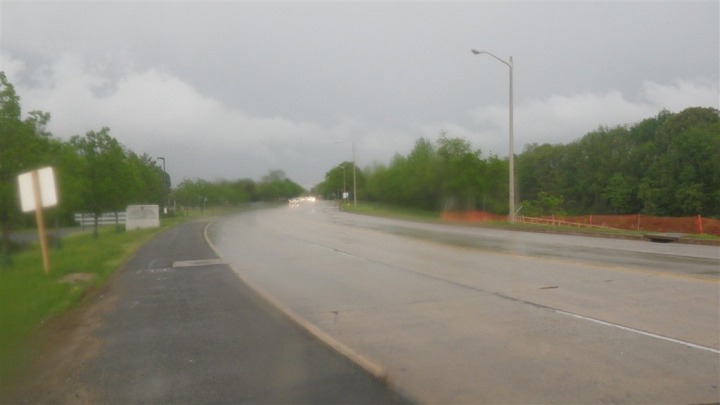 Once the main work portion of each set is over (I should note that sets are typically divided up into the ‘work’ portion and the ‘rest’ portion), I go into a rest interval half the length of the work interval.  Again, like before – back to Z3.  This means it give me a little bit of rest, but I’m still moving along at a mid-7’s pace – so it’s no walk in the park…literally. After that, I simply rinse and repeat, about five times in total usually.  Sound like fun yet?  Yeah, here’s what I think about this point (coming around the final corner during the work portion of an interval): 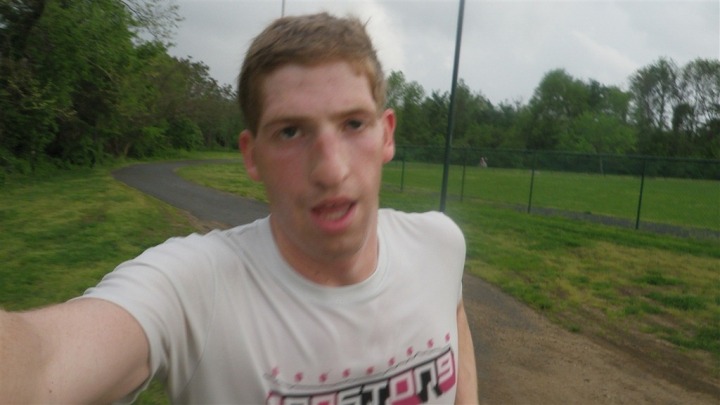 And I’ve still gotta run home!  The run home includes a series of four accelerations where I bump up the pace to sub-5/mile for roughly 30 seconds before having two minutes of rest/jogging.  Finally, I get a 5 minute jog/cool-down at the end to top things off.  Ultimately, my little paper ends up looking more like toilet paper: 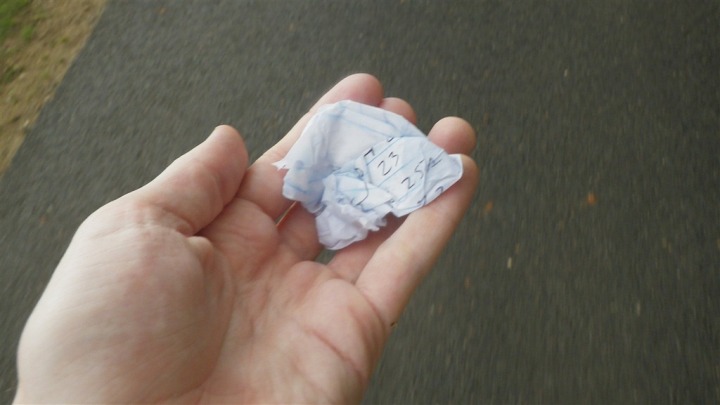 Of course, this is just one of many different bricks that my coach puts together.  I rarely share them (usually only once per year), merely because they’re his creations.  It’s also important to note that they vary in duration from week to week, depending on the exact point in the training plan.  Additionally, depending what point in the season the intensity may decrease but have a longer duration – where the work interval is upwards of 10 minutes long.  It’s all a pretty delicate balance. That’s really the cool part about having an incredibly dedicated coach.  He know exactly how much intensity I should be applying during not only the different parts of the season, but also my week to week schedule based on everything from life plans to race plans.  For example, Wednesday I take a very brief trip up to NYC – so this whole brick gets adjusted such that the bike portion is eliminated, but replaced with additional run pieces to act as a warm-up. On that note…I need to head to bed, got myself a fun early morning swim due to the Tuesday evening flight.  Thanks for reading! — Quick side note – here’s a few other coaching related posts I put together previously, may be of interest: How I train, upload and get analysis from my Coach Simple reasons why I love my coach Thoughts on triathlon coaching