Simple reasons why I love my coach

Every four weeks I get a Microsoft Word document from Coach Alan that includes a variety of questions.  The vast majority of these questions are aimed at finding out exactly what antics I have planned that are going to mess up my training schedule (well…his carefully crafted long range training schedule).  In addition, the document keeps track of all my upcoming races, and allows me to add race suggestions for later in the season.

Of course, this is mostly just a formality, since I talk to my coach so often via e-mail and phone that he knows my entire year’s worth of race selections from memory…and I think sometimes somehow even before I do.

Just for fun, let me show you what this current training block has shown schedule wise in that Word document:

I never said it was pretty.

The challenge with a schedule like this isn’t actually so much that I’m travelling so much – it’s instead the amount of change to schedule that occurs…which I’ll talk about in a second.

A schedule like the above – while certainly not desirable, it’s actually quite trainable if I give him enough information to understand how much I could realistically train on any given day.  I often will include later on exact flight times and work out.

For example, if you look at just a three day segment from last week in more detail, you’d see training opportunities:

In this case, I can fit in a early morning workout on Tuesday (which I did, a bike workout), and on Wednesday I was able to fit in a run while in Calgary at the ANT+ Symposium.  On Thursday however, he decided the best bet was simply rest and recovery.  With the previous day’s redeye flight, and the likelihood of working late – trying to cram in a workout wasn’t really logical, and wouldn’t serve the greater good of keeping me healthy/ready by Saturday for the Giant Acorn race.

So while I of course love the fact that my coach manages to make my workouts fit in this nightmare of a schedule, and while I love all the other amazing workout/race analysis he does mere hours after I upload it to Training Peaks…it’s dealing with the changes to schedule and life that make things best.

The weekend I was in Vegas following Interbike you may remember I was supposed to race the Las Vegas triathlon on Sunday.  Of course, on Friday night/Saturday I got really bad food poisoning, putting that plan in the can (among other things in the can).

After letting him know of my night next to the can, I was getting status check-ins every few hours – the one below being mid-Sunday afternoon, about 24 hours after I started getting status e-mails and calls from him: 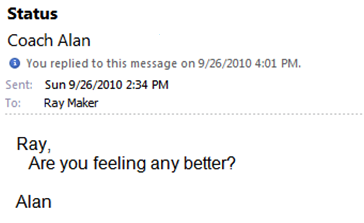 Then, once I let him know that food was successfully staying down by late Sunday afternoon, I got day-by-day incremental workouts (plus antidotal details for the upcoming race).  Note the timestamps on these e-mails – this is all just within a single day.  I received 7 e-mails from Coach that day about how I was feeling and little things like whether or not food was staying down. 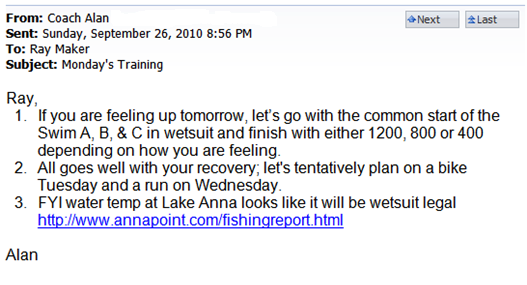 Maybe it’s just me – but I love the fact that my Coach is involved and caring enough to look at just one day at a time and do what makes sense.  While it’s rare that I have to miss a workout – it  makes my day to not have to worry about the workout angle when things don’t quite go as planned.  Because I know he’s looking out for more than just trying to fit in a single workout, but instead focusing on the longer term goals – be it a race, or just keeping me healthy.  And thus, one of the many reasons I love working with him.