There are few topics that cause more confusion, intrigue and general ‘Huh?’ in the sports world than calorie burn.  While many runners or cyclists often estimate calorie burn (and thus cookie allocation metrics) using borderline sketchy back of the napkin calculations, there’s also a significant portion of the population that looks to use their Garmin device to determine calorie burn.

So, I set out to put together a bit of the definitive guide to calorie calculations on Garmin fitness devices.  Back when I was at the ANT+ Symposium in Calgary I sat down to start the conversation with the Garmin team there.  Then more recently last week I met up again with the Garmin fitness team to talk through all the painstaking details.

As you might have guessed, there are actually a number of ways in which your Garmin device will calculate how many calories you’ve burned.  And not unexpectedly, the accuracy level varies based on which method you use.  Some methods offer a rudimentary guesstimate, while others are based on scientific testing that’s then imported into your device to get far more accurate results.

So, let’s walk through each of the six major methods, starting with the most accurate, and working our way down the list to the less accurate (the last option, Kilojoules, isn’t really ‘less accurate’ per se, but different…more in a moment).

1) New Leaf VO2 Test Profile: This method requires testing at one of a number of New Leaf testing centers around the country.  New Leaf is actually a 3rd party company that’s developed a pretty comprehensive way to determine calorie burn based on VO2 tests that are done.  The tests are not terribly unlike your common VO2 max test, and involve you being hooked up to tubes and wires.  The tests though are sport-specific, meaning you complete a running test to allow the Forerunner to determine running activity calories.  The tests don’t cross over, but there are tests available for running, cycling and elliptical.  Once a test is complete you can download your ‘profile’ into your Garmin device to get the most accurate calorie burn metrics when combined with a heart rate monitor.  I’m looking to get a New Leaf test done and put together a post or series of posts on the experience and accuracy I see.  Here’s the list of current devices, and levels of compatibility.

2) Firstbeat Algorithm (Current – 2nd Generation): The Firstbeat algorithm is the most accurate Garmin device calorie measurement that can be done without external testing.  But it’s actually not developed natively by Garmin.  It’s developed by a Finish company (Firstbeat Technologies) that has its roots in calculations around Olympic athletes, specifically Nordic skiing.  Their calculation uses  user inputted variables including gender, height, weight and fitness class.  It then combines this data with heart rate information from the ANT+ heart rate strap.  Specifically, it evaluates the time between heart beats (beat to beat) to determine estimated MET (Metabolic Equivalent), which in turn is used determine actual work expenditure.

This makes the system one of the more accurate non-invasive options (read: doesn’t require a laboratory), within about 10% accuracy.  Firstbeat has published a fascinating white paper detailing the technology and accuracy rates.  This little snippet below though helps to show where the technology lies accuracy-wise – with it being right in the upper-middle compared to full-board lab operations on one end, and ‘distance/time’ calculations on the other end (click below to expand picture).

Finally, this metric also ‘learns’ you as an athlete on a given device.  Meaning, over time it has a weighted algorithm to note changes in your fitness level and adjust calorie burn accordingly.  I asked how ‘friends and family’ using a device might impact this.  They noted that a single one-time use wasn’t weighted heavily enough to make a difference, but that obviously a couple sharing a single device would see less accurate results (both due to the profile information being incorrect 50% of the time, as well as the ‘learning’ aspect being off).  It also should be noted that the second-generation of the Firstbeat algorithm is only applicable to running currently, and isn’t used in the cycling products yet.

3) Firstbeat Algorithm (1st Generation): This is essentially the same as the above noted algorithm…except just slightly less accurate.  This first generation algorithm is used on devices prior to this year, which are detailed in the below tables.  Like any product, technology or concept – the calculations have evolved and are made available in its most recent incarnation on Garmin’s most recent devices.  One interesting tidbit is that they found that while this 1st generation algorithm worked really well for newer runners, it was less accurate in more advanced runners – hence some of the updates seen in the 2nd generation.

4) FR60 Heart Rate Algorithm: The FR60 non-GPS running watches have a proprietary heart rate based algorithm that’s used when a heart rate strap is enabled.  The primary driver of this was to remove the dependency on speed/distance that’s typically associated with a GPS unit (since the FR60 is not GPS-based).  The Garmin engineers describe this algorithm as a classic heart rate based calorie burn calculation, with virtually no extra ‘fancies’ tossed in to make it significantly more accurate.  There are no plans to evolve this one-off algorithm to other devices (including the next version of the FR60), nor to port either Firstbeat to the FR60.

5) Speed/Distance Algorithm: This is the most basic method of determining calories, as it is only used when a heart rate strap is not enabled/used (default). Given the lack of heart rate data, the unit will simply use speed/distance, as well as the weight you entered in the device setup.  The reason this is less accurate (65-80% accurate) is that it can’t differentiate how much effort you’re expending to travel a given distance – which while less important for running, is quite important for cycling.  For example, if you’re coasting down a 7 mile descent, you’ll burn virtually no calories compared to ascending the same mountain.  This speed/distance algorithm does not consider or evaluate the impact of elevation change – primarily due to concerns the team had about relying on GPS-based elevation to determine calories.  They also reasoned that while the Edge units had barometric altimeters, it was better to focus on heart-rate based calorie burn, as opposed to simply expanding the ‘guesstimate’ that the speed/distance algorithm is.  Finally, note that if you wear a heart-rate monitor/strap – speed/distance are ignored, and instead one of the other above (more accurate) methods are used.

5) Power Meter to get Kilojoules: While not technically calories, the kilojoules is a unit of work, and thus is a method that some folks may use to judge how much effort was expended on a given workout.  This method is only available on units that support power meters (Forerunner 310XT, Edge 500/705/800), and requires a compatible 3rd party ANT+ power meter (such as a Power Tap hub, Quarq Cinqo, SRM, etc…).  This isn’t less accurate, but rather a different metric than straight calories.  You can convert from kilojoules to calories.

Finally, it should be pointed out that the overall philosophy of the team is/was to get folks using heart rate straps if they want accurate calorie metrics.

So now that we’ve gone through and covered the main methods for calorie calculations, let’s break it down on a per-device basis.  We’ll start off with the running and multisport related devices.  You can click to expand the chart and get a full view that makes it a bit more visible.

As you can see, the most recent devices (FR210/FR410) have the most up to date calorie metrics – primarily being the 2nd generation Firstbeat Algorithm.  However, many devices support the New Leaf test, almost everything except the FR205, which is simply because it doesn’t support a heart rate strap.

Next up is the cycling side of things.  You’ll see that again like the running devices, the newest devices – such as the Edge 500 and Edge 800, have the most recent calorie calculations available.

As you’ll notice, the Edge devices also add the kilojoules power meter option, for those with compatible ANT+ power meters.

And finally, one master sheet of all devices in a single table:

Given so much of the the calorie calculations is dependent on a heart rate strap, I should point out that any ANT+ heart rate strap will work when it comes to gathering heart rate data that the Garmin devices can use.  However, there are a few different Garmin-made ANT+ straps out there to select from.  The three that are available today are: 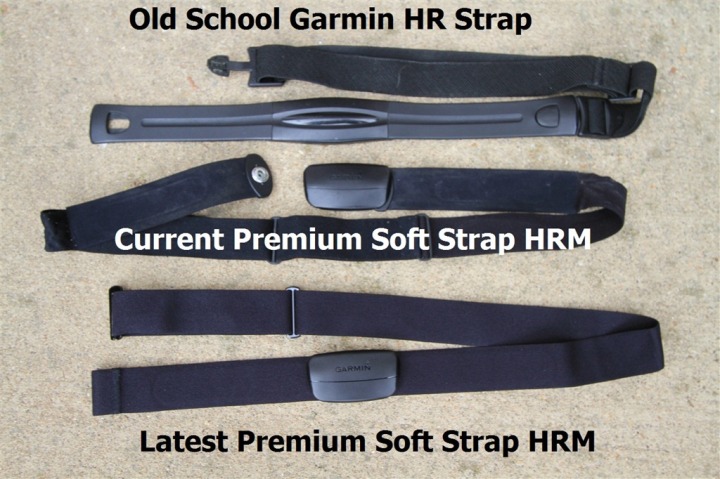 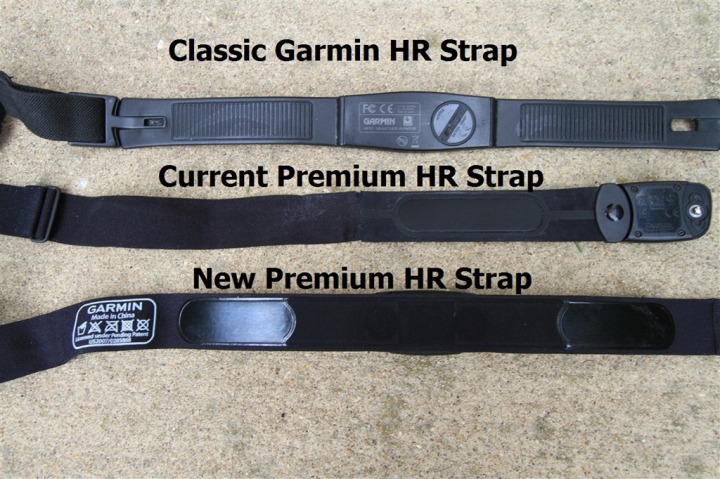 1) Classic Garmin Heart Rate Strap: This is the most common version, and also been around the longest.  It features a plastic portion of the strap that reads your heart rate, while the remainder of the strap is fabric.

2) Pre-2010 Premium Heart Rate Strap: This strap version came out in Spring 2009, along with the Forerunner 310XT.  It features a fully fabric band all the way around, with snap-on connectors holding the transmitter portion to the fabric.

3) 2010 New Premium Heart Rate Strap: This version came out in August 2010 alongside the Edge 800, and is now shipping with all premium heart rate strap units (i.e. FR310XT, Edge 800, etc…).  This one aims to resolve some of the spiking/dropout issues noted in the pre-2010 version.  In my testing over the past few months, this seems to resolve about 95% of the spiking issues that I’ve seen.  This version will be available for individual purchase, but an exact timeline hasn’t been fully finalized.  Note that I asked if there was a better name for the newest strap besides “New-new Premium Heart Rate Strap”, and the team hadn’t really come up with a good name to use externally.  So, for now, I’m going with 2010 New Premium Heart Rate Strap.

In general, remember, if you’re having problems with heart rate strap readings, be sure to check out both of my posts on the subject – first part here and part two here.

There’s no doubt that the Garmin fitness devices offer a plethora of calorie calculation options.  Before I started looking into this I would have said that there were too many options, however, after understanding the different options better – and the differing levels of accuracy each one offers, I have a better grasp on why there are so many different ways to calculate calories.

As you can see, in many ways – it ends up being a matter of how much effort (or perhaps time/money) one wants to invest in the solution to get the most accurate results.