Whenever anyone starts to look at purchasing a GPS enabled watch, they invariably start with virtually all signs pointing towards the Forerunner 305 as a great starter watch.  The reason for this is partly due to the overwhelming number of FR305 users out there, but also because it was one of the first GPS watches in the market that actually looked the part of a watch (albeit large), versus the previous wrist-mounted units that looked like a small VW bus being strapped to your arm. 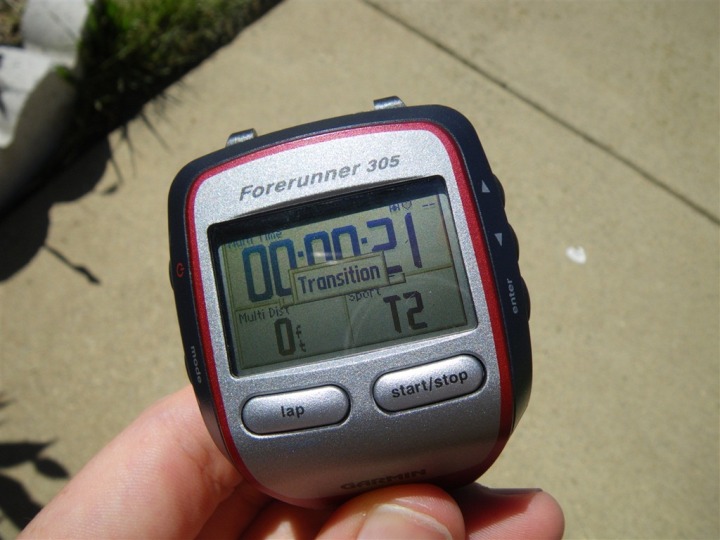 But as with any electronics product, the FR305 has slowly been eclipsed by not only other Garmin products (namely the 310XT as the multi-sport tool of choice), but also other competitor offerings such as the Timex Global Trainer.  However, there’s one area that no GPS watch has surpassed the FR305 on:

The FR305 continues to be found for less than $150 at most major retailers, with the larger players getting the price down to sub-$130.  Even more – that’s with a HR strap included.  No rebates to mess with, no funky vendors pretending to be from Alabama, but are really from Albania.

Further, none of the other GPS watches that flirt with the sub-$200 price point include a heart rate strap.  Further, none of the other GPS watches out there in that price range feature as many of the multi-sport options as the FR305 does.  Specifically, the ability to utilize a quick release kit – as well as features like the speed/cadence sensor, and the running footpod (often excluded from basic GPS devices).

Last week during my conference call with the Garmin team, I discussed end of life on a few models.  The discussion started with the Edge 705 – which is being replaced by the Edge 800.  Back at Interbike, it was noted that the Edge 705 would start being phased out in the January 2011 timeframe, once the Edge 800 had fully fulfilled the retail channel.  Given the price point for the Edge 800 is the in same ballpark as the Edge 705, there’s very little reason to buy the 705 over the 800 – so this is logical.

I next moved to the FR305.  There’s been rumor after rumor that the FR305 was being pulled from the retail channel, so I specifically wanted clarity on when they planned to ‘retire’ it.

Their answer surprised me though.

They said that they had “no plans whatsoever” to discontinue the device. Further, they went onto say that the Forerunner 305 is “still hugely popular, and we’re selling a ton of them”.  A finer point was put on it when they noted that the FR305 continues to “sell like hotcakes”.

We discussed for a bit how the FR305 really fills the gap in Garmin’s overall GPS catchment strategy for sports devices.  It’s the cheapest GPS device they sell, and one that gets folks hooked into devices.  Their hope is they you enjoy the product enough to look at other Garmin athletic devices – or more advanced products such as the 310XT or a cycling-specific GPS device.

Their “hugely popular” statement continues to track with the page rankings I have on the site for GPS reviews that people view – with the FR305 Review leading the pack in page views, despite being the device being a bit older.

Deciding which model to choose

You may remember in my 2010 GPS Recommendations post I discuss which models are appropriate for which folks, and that advice hasn’t changed.  The only recommendations I’d make would be to swap out the FR110 and replace it with the FR210 – which I’ll look to update shortly.  I’ve been loving the FR210.

But, both of those devices are out of the price range of someone look at the FR305.  The FR305 is not only a powerhouse of a device…but it’s also a great entry watch for folks looking to get into either running or triathlon and train with GPS or heart rate technology.

To put a finer point on the HR piece – if you look at competing heart rate monitor technology from other vendors – namely Polar – none of those devices offer the ability to get per-second downloadable heart rate charts within that price range.  Those models offer ‘cumulative’ views, or essentially HR and time/distance averages – nothing that you can drill down to on a per-second basis.

Of course, one of the most common questions I get in e-mail continues to be: Should I get the FR305, or XYZ device?

As I discussed in the recommendations thread – I recommend across the board the FR305 in virtually every situation.  The only exceptions are the following:

1) Power Meter support: If you need bike power meter support, then you need the FR310XT or an Edge device (or any number of other vendor’s devices).  The FR305 simply doesn’t support it.

2) Full waterproofing: While the FR305 has enough waterproofing to last a strong rain, it won’t last extended submersion.

4) You want something smaller: I know…small wrists.  While I still maintain that once you use the FR305 for about 30 seconds running, you’ll forget about its size, I understand folks want a more compact watch.  For that you’d need to look at the FR405/FR410 or the FR210.

That’s it.  For everyone else I’d recommend the FR305.  For the price, you simply can’t beat it.  Every sports software application out there supports it, and the device is rock-solid for the thousands upon thousands of users who rely on it.