This weekend was a solid mix of different stuff, not overwhelmingly busy – but just good-type busy.

At 6:53AM I was laying in bed deciding whether or not I wanted to join up with the running group to do loops around Burke Lake (at 7AM). On one side of the coin – I only had a 40-minute run to do, which I can easily just do myself. On the other side of the coin – it was near my 9AM swim technique session, and then I’d be all done for the day. I decided to join the group. Although it was still a 20 minute drive away. But I know that the Saturday long runs never start on time, usually about 20 minutes late. I figured I was good.

Well, sorta. They started only kinda-late. At about 7:10AM, so I had to play rabbit and catch up a bit. 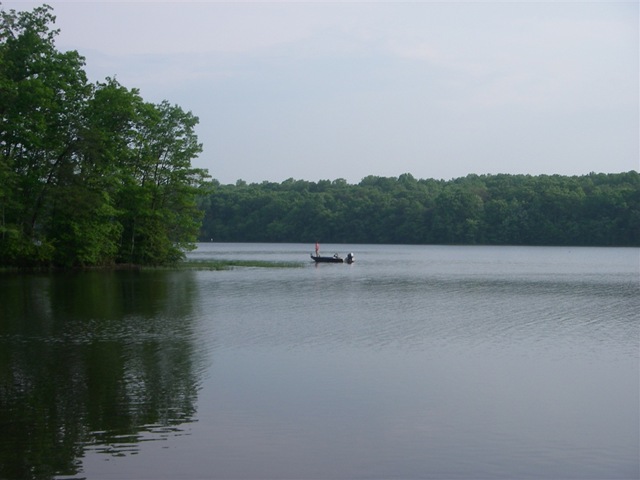 If you’ve never been over there (like me), Burke Lake is a fairly nice place. Each loop is about 5 miles, and it’s all hard pact trail running. Unfortunately they don’t allow swimming. 🙁

I found the following sign funny, primarily the third fish down the list. Cause running back the last 15 minutes – I had to go that species so bad I seriously thought I’d never make it. Even as I got into the bathroom door I thought there was still a solid chance of miscarriage. Luckily, all worked out well. And I felt spectacular afterwards. 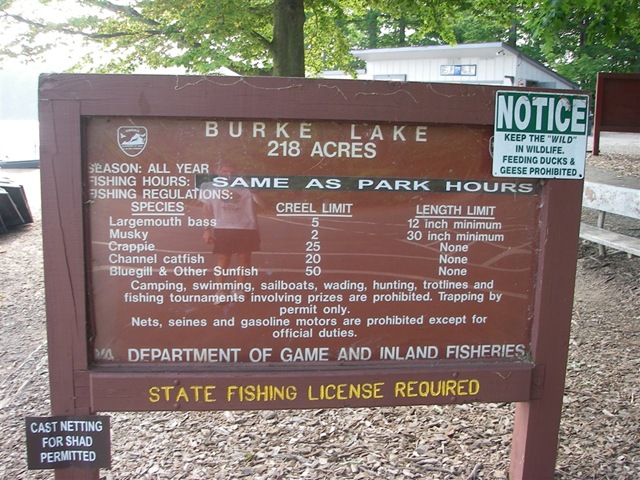 After that, it was time for a 2 hour swim technique session. It was good, I’m slowly getting more efficient in the water.

The rest of the day I set aside to do errands, like…refill my Propel/Gatorade/Water stockpile from Coscto. Actually, it was pretty cool. I parked a million miles away, but it started to rain just as I left the building (like thunderstorm rain that goes from nothing to something in 10-15 seconds). My car was at a slightly lower elevation, and the food I had quite a bit of ballast. I jumped on the back of the cart and screamed across the parking lot to my car. FRICKN AWESOME! The looks I got were hilarious. The kids out there were clearly envious. 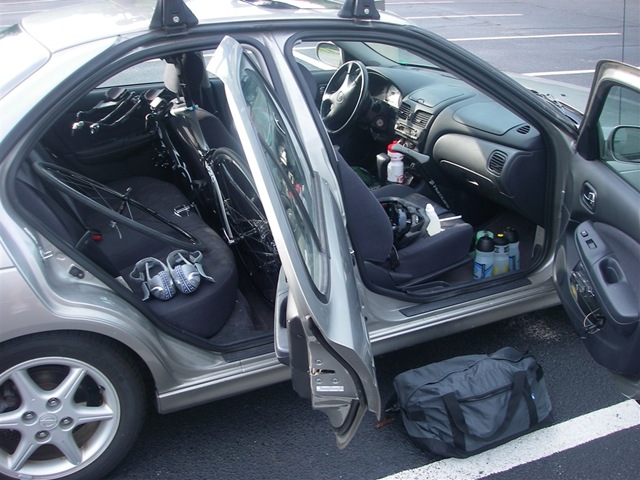 (I went through more than 8 water bottles. That’s the bike in the back (T1), and T2 in the front with the running stuff on the front seat.)

I was required to don the wetsuit. Luckily I got there right at pool opening, so it was just me and two others spread out over 15 lanes. I knocked out 1,100 yards of continuous ‘warm up’, and then it was onto the main event – a 500y time trial. Out and done in 6:56. I was quite content with that given I wasn’t going ahead full steam, but rather at a sustainable clip.

Got out to my car in good time, topped off my tires and then closed my car doors preparing to head out. About 1 second later… POP! Doh, my back tire popped for no good reason. Oh well, at least it did it before I mounted my bike and headed off. The good news is that the stock tires on the P2C are amazingly quick to replace. However my race tires that arrive later this week won’t be so easy.

Off I went for a 2 hour ride. The plan was to stay comfortably in Zone 2 the whole time (so not pushing too hard, just ‘comfy’). I headed south from the rec center on rolling roads that would eventually take me to the Potomac river, where I would do some loops and then head back.

Here’s a shot as I head out past some nice countryside. It’s amazing how quickly out of DC it can look like farmland. 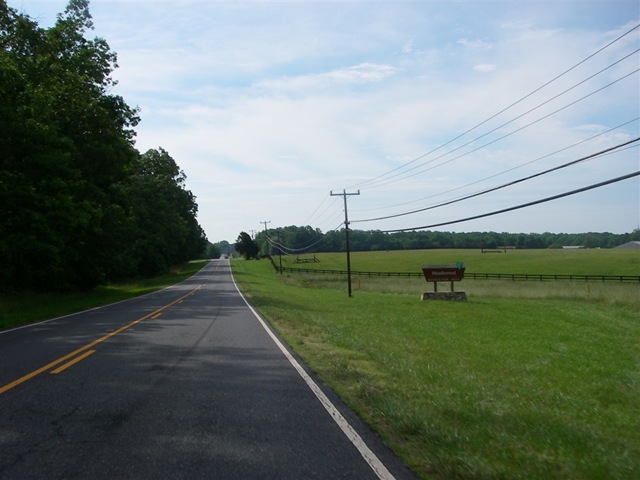 As I was heading back I noticed the sun created an awesome shadow of me on the pavement. So naturally…I took a photo of it. 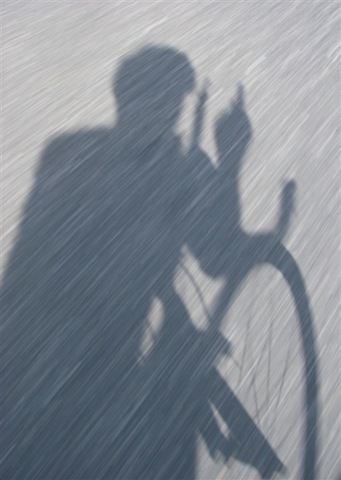 Two hours later, I arrived back at the automotive transition area. I was fairly happy with an average moving speed above 20MPH, while doing it all in aero. Yippe. This new bike is SOOO comfy.

Nothing positive can come from a run where the temperature is edging up into the mid 80’s and the humidity is 60%. But…off I went. I aimlessly wandered around Alexandria and Springfield for 90 minutes. I blew my HR zone the entire time (I was supposed to be Z2), it just wasn’t happening. No matter what paces I tried (from 7:20 to 10:00/mile), my heart rate was locked on Z3. So…crap. I just kept on running.

I did stop twice to ‘borrow’ water from two random houses hoses. With the heat it’s hard to take enough water, so you have to improvise. I picked houses with blinds closed and hoses clearly visible. 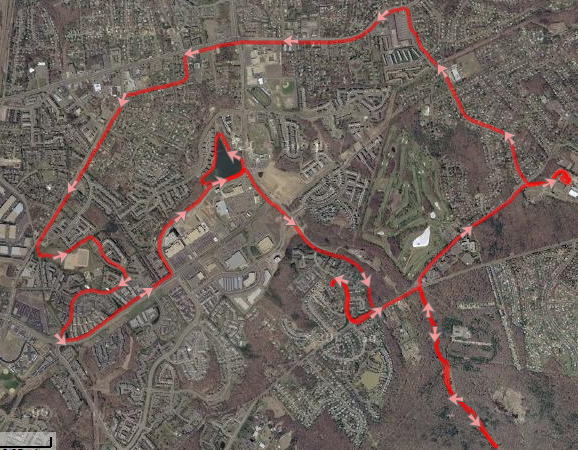 Yes, I know my route looks like I’m special, but really – there was some logic in it. I’ll let ya know once I find that logic.

I managed to keep the average pace over the course of the run at 7:56/mile. It was…warm…though.

After I was done lying under a tree at the rec center, I hit the showers and then headed straight to Clarendon – for the 2008 CSC Invitational. It’s a pro/am cycling race that attracts talent from all over the country and world. The course is 100K on a 1K loop around downtown Clarendon.

I’ve never been to a cycling race before, so I wasn’t sure what to expect. To be honest I was kinda approaching it like Indy-car racing…you’re there for the crashes (oh come on, don’t say you don’t think the same thing). But despite the fact that I didn’t see any of the crashes, it was actually pretty cool.

These guys (I missed the ladies), were screaming. Like a massive freight train of cyclists. Loop after loop. It takes them slightly over 2 hours to knock out 100KM. 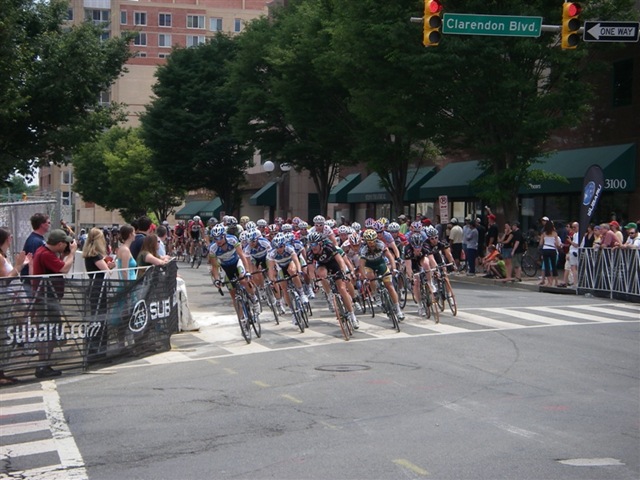 And here’s one coming around the corner. 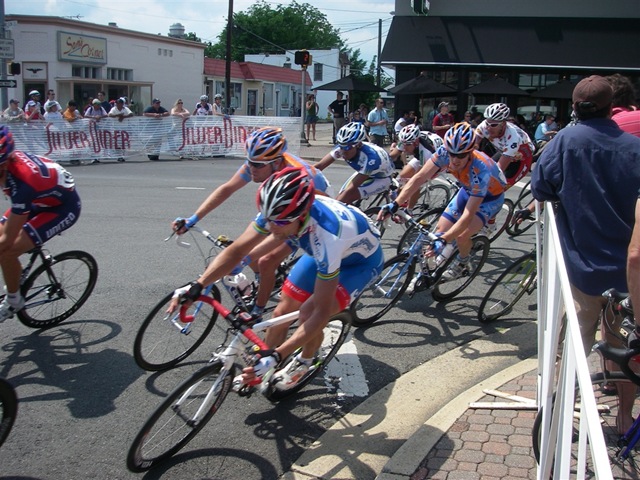 Because I forgot my DSLR camera, I had to make due with my little camera. But, at least it has video! So here ya go, the best parts of the race in 80 seconds! Definitely check out the section at the 60 second marker, which includes the video of the above shot.

After the race, I swung by Gravely Park on my way home to watch runners, cyclists and planes takeoff/land at DCA. And I enjoyed a belated lunch. Chipotle! The lunch of calorie burning champions everywhere! I had burned 4,185 calories this morning, a 1,100 calorie burrito is a drop in the bucket. 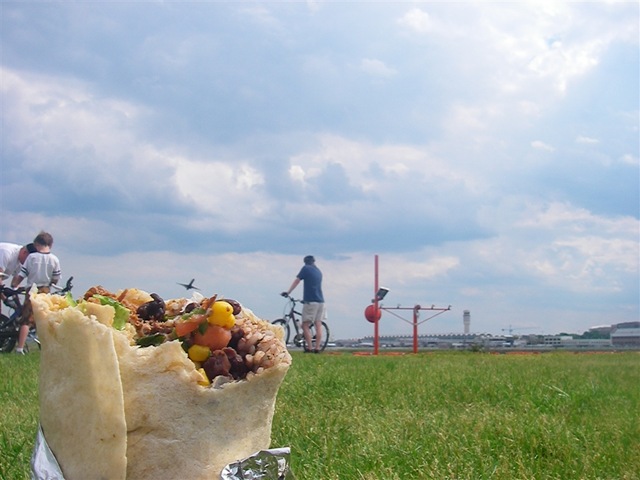 And then I enjoyed the beginnings of summer…watching the clouds pass overhead. 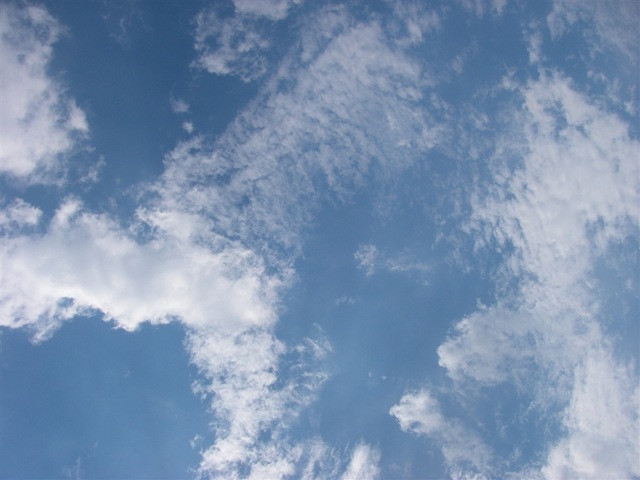 Have a good week everyone!