Some days just go by in a blur…and this was one of those.  But – I love these kinds of days.  If every day could be like this I’d be thrilled – seriously.

The alarm clock starts buzzing, but I’m already up and answering a slew of e-mails from people in India.  The time zone differential is kicking my ass already.  Thankfully the West coast is still sound asleep, so no e-mails from them yet.

Out the door and to my first stop – work.  But only for a few minutes.  I need to copy 55GB of data onto my laptop for later in the day.  So I start that copy job and leave again.

Onto the track I go.  To begin Thursday Track Day.  I LOVE track day – cause I love going fast.  I’ve never actually used this track before, as normally I’m at the local high school in the evenings.  But I used this because I didn’t want any school issues with students present.

The track workout was actually an ‘easy’ week, because this is the ‘rest’ week after three build weeks.  From the coach, off we go:

I accidentally blew by my splits on the 200’s:

I fully blame #2 on the 40 or so soldiers standing and watching me run laps.  Seriously – on that 28” one – they turned and watched me coming down the stretch in front of them.  No pressure. 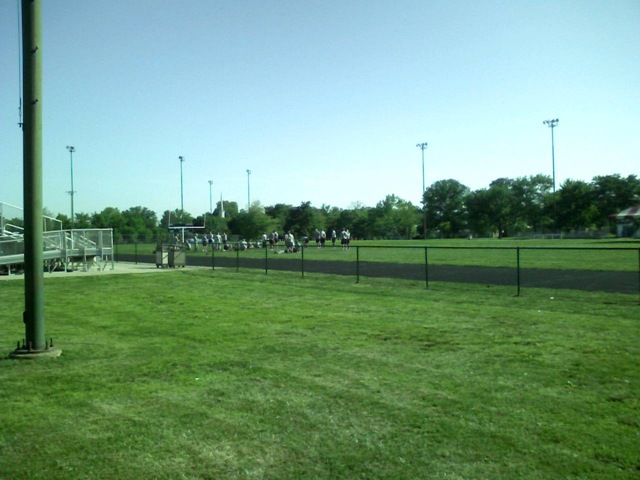 (Cell phone image of the track…sorry, I took my little camera and it’s battery went kaput)

Ok, track done – and behind schedule – crap!  Zip back to work to pick up my little hard drive, thankfully it’s done copying.

Arrive home, shower, put on suit, run out the door – in about 7 minutes.  I arrive at DCA (Reagan National Airport) 15 minutes later.  Can I tell you how much I love this airport? 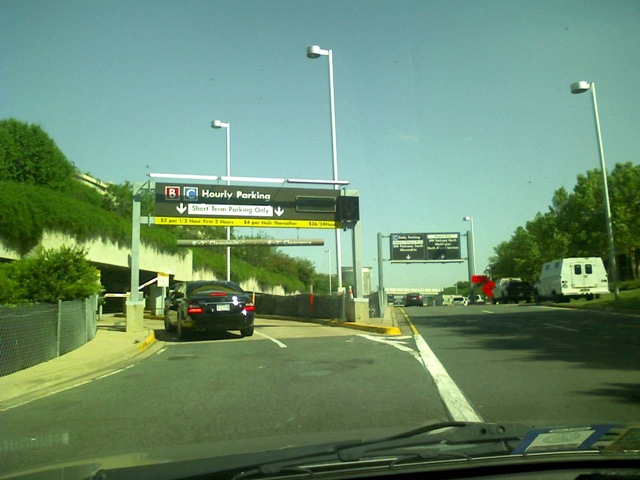 Arrive at the airport, walk maybe 100 yards to the check-in machine and grab my ticket.  The security lines were empty, so bothering with my Clear card would have actually taken more time.

Since I had a ton of time (my flight wasn’t until 10:45AM) – I actually grabbed breakfast.  My choices were horrid – Five Guys, Cinnabon, California Tortilla, Brewery. (Well, to be clear – they’re all great places, just not if I want to pretend to eat healthy).  Luckily, a coffee shop sold some simple chicken wrap thing.  Done!

As I was eating, the professional soccer team – DC United sat at the table next to me.  This is actually the second time I’ve run into them at the airport.  The first was about 2 years ago on a redeye flight from San Fran.  They (like me that day) were in coach.  Nothing beats being in the middle seat on row 30 between two professional soccer players….if only they were female. 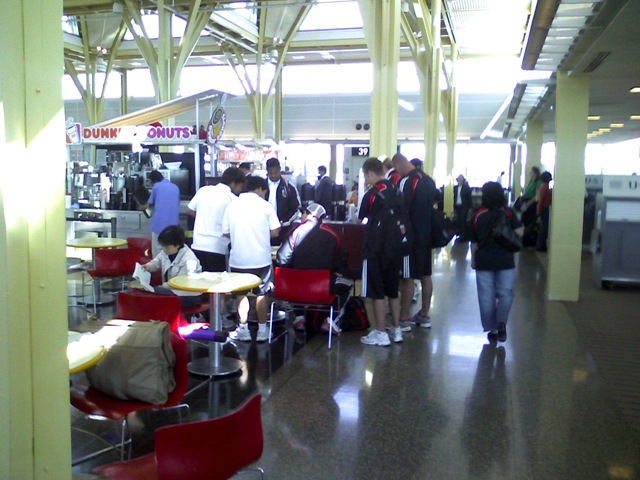 I arrive into Charlotte.  Despite having flown through here a gazillion times I’ve never actually left the airport premise.  So today I ventured out on the town.  Well…ok, I venture 3 miles away to the middle of nowhere where I have to give a presentation/talk.

I don’t know much about Charlotte, but here’s what the in-flight magazine has to say:

“Few cities can match the relentless upward mobility inherent in Charlotte’s DNA.  Boosterism and business are unavailable in this New South City.”

What the F’ does that mean?  Seriously – I have no idea what they are trying to say.  None whatsoever. Boosterism? 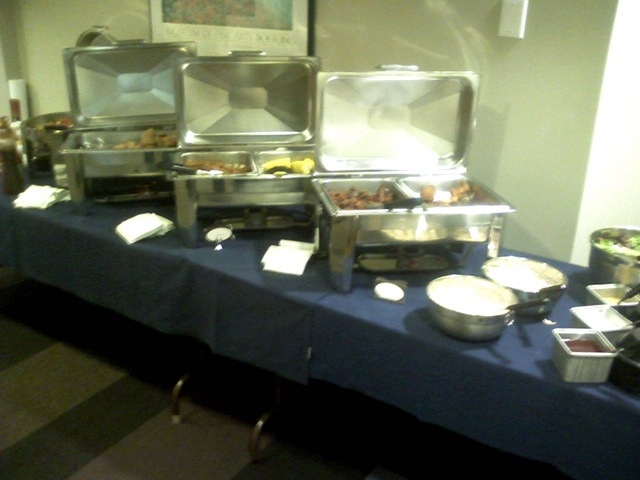 (Again, sorry for the bad photos…taking out a big camera would have been kinda awkward…plus, it was still dead)

The event I’m speaking at has a little food buffet available for me, and I check out my options.

1) BBQ Beef with deep fried something next to it
2) BBQ Pork with buttered corn on the cob next to it
3) Heavily fried chicken, with something else fried next to it
4) Potato Salad
5) Some greens with a choice of heavy ranch or semi-heavy ranch

Are you crapping me?  So, I wander to a different building and find a place that has simple turkey wraps.  Turkey, lettuce, wrap, Done.  Second wrap of the day.

I do misc work for a few hours and make sure my presentation is tight.  I just put it together last night. 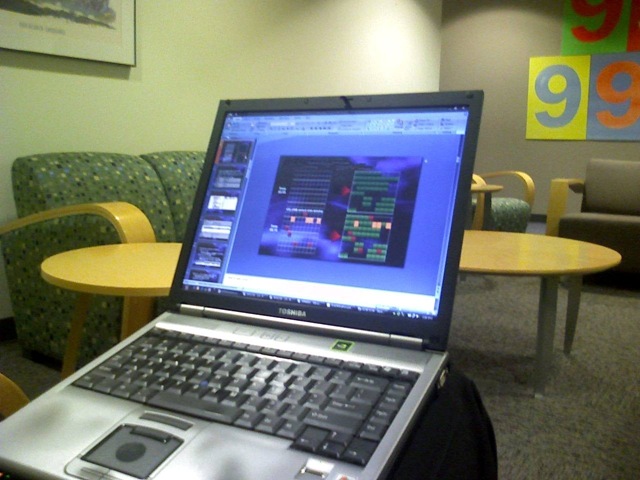 I’ve presented to big groups (hundreds) & little groups, informal and formal.  But it’s the unknown ones that scares me.  I didn’t know much about my audience other than their titles and the organization(s) they represented.  Their titles were big: CIO #1, CIO #2, CIO #3, Chief of this, Chief of that, Director of this & that.  And their organizations were even bigger by name – perhaps the most important in government. (Why they flew everyone from DC to Charlotte is beyond me).

I didn’t know if they were a friendly crowd or not, heck – I didn’t even know how big the crowd was going to be.  Not to mention I was the last session of the day.

But thankfully – everything went without a hitch.  Woot!  45 minutes later I wrapped up right on time (it was short, but jam packed).  I was even told that one of the CIO’s thought it was the best presentation of the week – awesome!

So… I have an 8PM flight scheduled – but I can I make it to the airport, drop the rental car off, and grab the 5:45PM flight?

Beg…plead (ok, not really)….run (really).  And off I went – flew through security, down the C concourse to the very end (why is it that it’s always the end one)?

The guy took my boarding pass before he realized I was on the later flight.  Once I told him I wasn’t actually on this flight – he said “No worries, pick any seat you want”.  SUUUUWWWEEEET!

The only catch?  I picked the one empty aisle seat on the plane….that was next to a nut job.  This lady just wouldn’t STFU.  Telling me about god knows what.  The flight attendants and other passengers were literally falling over laughing cause she wouldn’t stop talking.  One of the F/A’s had to stop her safety briefing because she couldn’t stop laughing at my predicament (as the lady blabbed on about peachfuzz, trees and airbags).

Once in the air- I busted out the laptop and headphones and entered blissland. 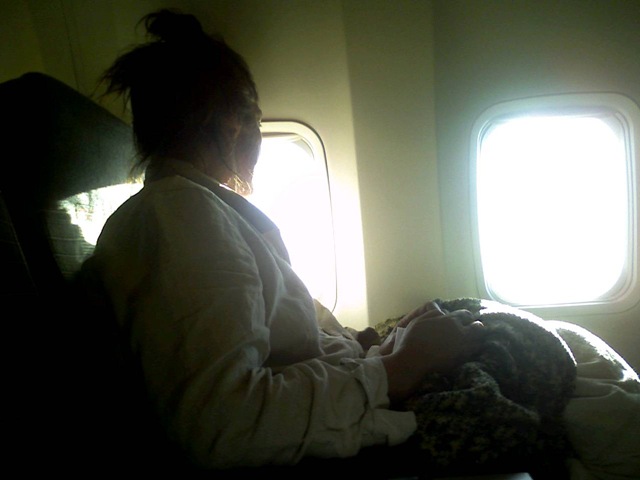 7:00PM: I was kinda hoping it would be a touch early and I’d be able to swing by Pacers on the way home and go for an easy run with them – just to stretch out the legs.  But… didn’t happen, landed a few minutes later than I needed to make it work. 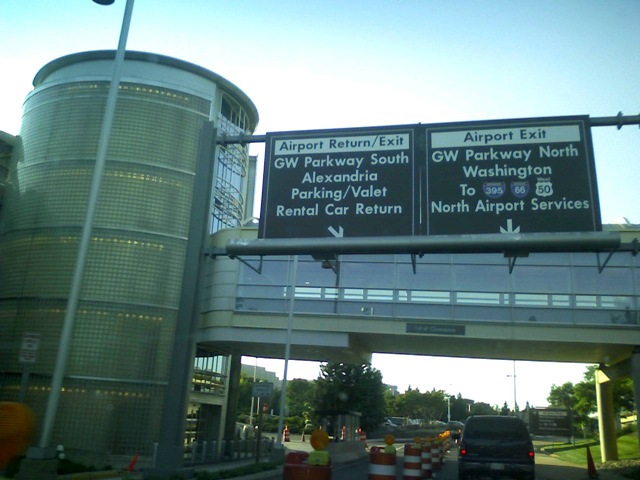 8:18PM: Now…done.  Now, if only I didn’t have to stay up till 2-3AM for calls with folks halfway around the world again.  And my cell phone battery is kaput too now. Double-Doh.