Today’s weather was looking much more promising than last week’s Saturday ride.  The weather had peaked a bit above freezing a few times over the course of the week, melting off any snow on the pavement.  And there hadn’t been any precipitation of any kind in the last 7-10 days – so it was just dry and cold.  When I set out it was 34* according to my little outdoor thermometer.  When I returned it would have dipped down to 31*F.

I decided to tie together a series of different ride pieces together to make a new ride that I’ve never done before.  I would start off from home, skirt the side of Old Town and then eventually join up with Four Mile Run shortly before transitioning to the Mt. Vernon trail for a few miles.  I’d jump across the river into the city for a while, and then bound up Rock Creek parkway to basically the top, and then turn around again.  This would start in Virginia, swing through DC and then hit Maryland before turning around (yes, I know DC isn’t a state…but for the purposes of this post it is).  Here’s what it looked like: 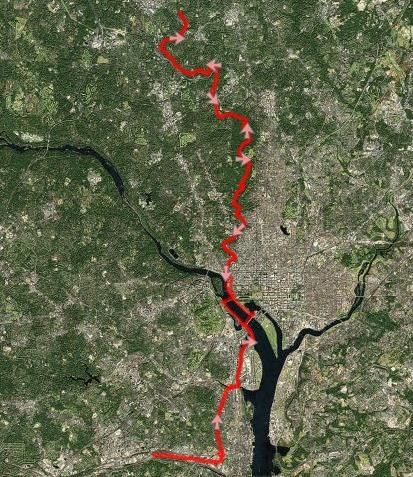 I did have one ‘less than desirable’ portion.  Shortly after going past the backside of Lincoln’s Memorial I followed the street signs to Rock Creek Parkway.  Seemed logical right?  Umm…no.  Cause apparently those signs put you on a section of road that’s essentially 1.5 miles of highway.  Three to four lanes wide with cars whizzing by at 50+ mph.  And me stuck in the middle lanes following the signs to Rock Creek Parkway.  I cranked it up as fast I could go and made like a hammer-fest, but even peaking at 30mph, I was still short of the cars by 20mph.  Doh.  Not i.d.e.al.

Here’s the section in question, highlighted in blue.  Interestingly, this was part of last year’s Nation’s Tri…except without the 50mph cars mixing in the fun. 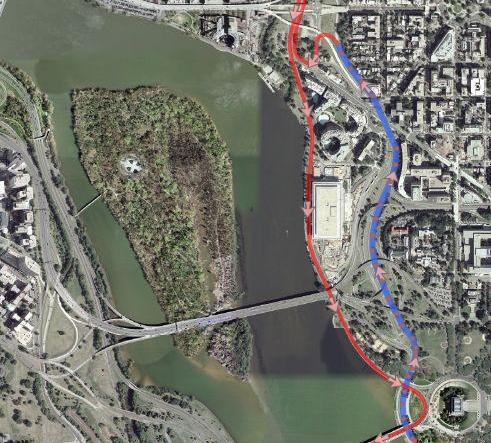 I did have one more revelation as I approached around the 40 mile mark.  I sucked at nutrition today.  I didn’t have anything but water on my bike, and my breakfast only consisted of a few bowls of cereal.  I could feel the like of energy in the last 10-15 miles, and definitely need to remember to fuel correctly – just because it’s cold doesn’t mean my nutrition plan should change.  My bad.  I’ve got warm-weather nutrition nailed, but haven’t figured out cold weather yet.

Oh…and I should have worn my other warmer pair of cycling gloves.  My fingers were kinda cold after nearly three hours.  Here’s a shot from within Rock Creek. 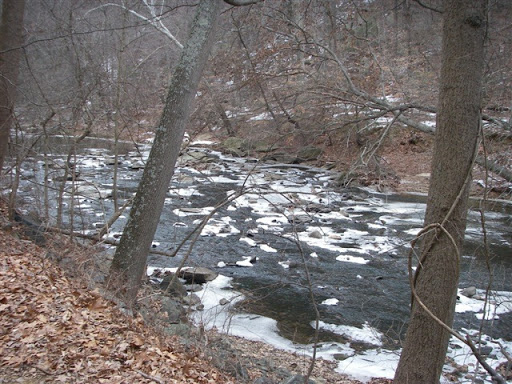 After all that…it was time to make dinner!  I was starving given I just knocked out 2,982 calories.  I went to my book case and decided I’d pick something out of the Italian cooking bible (a whopping 1,264 pages) – ‘Silver Spoon’.  I went with a Semolina and Prosciutto Gnocchi.  I also decided to throw together a quick Bruschetta as an appetizer.  Lastly for dessert I made a Double Chocolate Pudding Parfait.  Given I had a fair bit of time, I just made everything from scratch.

For the Bruschetta, I put a thin layer of fresh pesto sauce down on the baguette, and then chopped up some nice tomatoes and sprinkled them with salt and pepper.  While parmesan cheese isn’t technically part of a true Italian Bruschetta, I added it – cause I like cheese.  Toss it in the oven for about 8 minutes and it’s good to go. 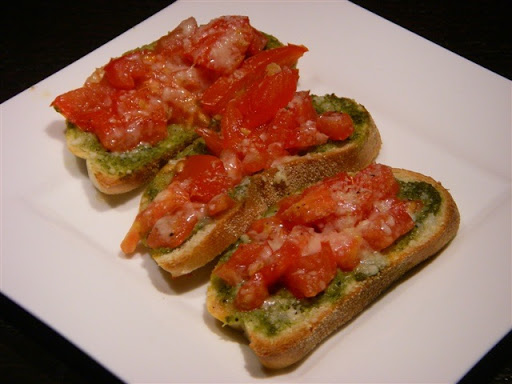 Next up was the Gnocchi.  Unlike regular Gnocchi, this actually didn’t contain any potatoes.  Which is good, cause I always burn my fingers making regular potato  Gnocchi.  The interesting twist in this one was the chopped up Prosciutto inside the Gnocchi.  After making the ‘dough’, I shaped it using a Gnocchi paddle and then put it in the oven to bake (which, btw, normally is done in boiling water).

The recipe didn’t call for a particular sauce, and I couldn’t decide what I felt like… so I just made three different variations.  I left one ‘plain’ per the recipe with just a light butter glaze and bake parmesan cheese.  I did another with a meat sauce I had made from a few days prior, and then lastly I did my favorite – a quick pan butter sear and then tossed with pesto sauce and finally a reduced balsamic glaze over the top.  Oh yeah, a light dusting of parmesan cheese over all of them.

It’s kinda hard to tell in the photo, but the meat sauce is to the left, the plain up top, and the pesto/balsamic down in the right. 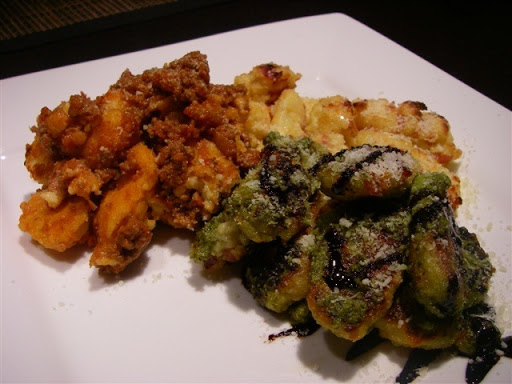 Lastly…it was time for dessert.  While the gnocchi was baking, I whipped up (pun intended) the Double Chocolate Pudding Parfait.  This was actually super-easy and took only 20 minutes to make from scratch.  Basically it’s a layer of chocolate pudding, and then another layer of fresh cocoa whipped cream and then more chocolate.  The much harder part was actually getting it into the wine glass without the contents touching the sides (to make it look pretty).  I managed to break a wine glass.  Again…not ideal.  Then I realized a simple pastry bag would be the key.  Much easier.  After I got it in, a quick dusting of cocoa and it was done. The resultant: 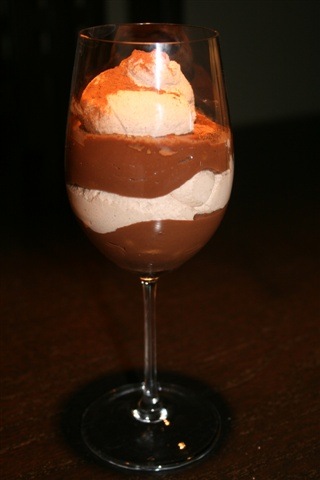