I think my weekends are getting busier.  And not just from training – but life in general.  I’m not sure at what point combustion will occur, but I’ll let ya know if it happens.

The Washington National’s moved from the ‘glorious’ RKF Stadium to their Nationals Ballpark a few weekends ago.  And I got some cheap tickets to check out the digs this weekend.  $10 cheap.  I enjoy just wandering around the park so cheap seats are good.  Plus after a few innings you can usually move down to better seats – especially given the stadium was only half full. 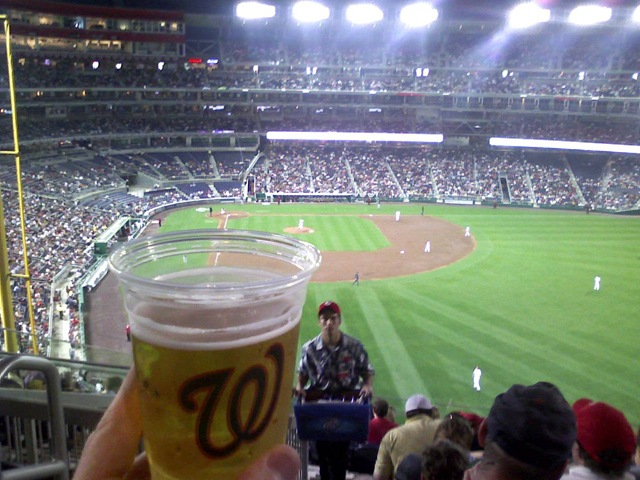 The short review: I don’t like the outside – it’s too 90’s ‘convention center’ looking.  But I do like the inside.  It feels small inside, and there are NO bad seats that I could find.  And my original $10 ticket was pretty darn high up, although you wouldn’t think so from the above photo.  Lower photo is where I moved to later on. 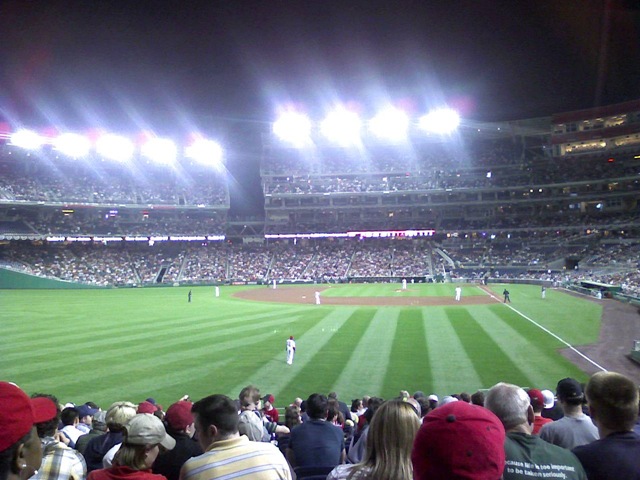 It’s long-run time.  That what my Saturday’s are all about (well, that and the bike and swim afterwards).  The Pacers group was starting from their Clarendon store because they are opening up a new Tri store soon.  They were planning a simple 12 mile out and back course (6 out, 6 back).  But I needed to get in 2:20 of running.  So I created the mother of all loops.  Encompassed almost all of the major trails.  Curtis, W&OD, Four Mile Run, Mt. Vernon, and the Monuments.  See below for the overview.  Oh, did I mention it was hot out?  80* and thunderstorms/humid.  But the rain felt nice.  Just shy of 19 miles later, I got back to the store (on time).  My pace suffered a bit due to my failure to correctly hydrate/nutrient myself over the first 15 or so miles (and then I got some Gatorade from a vendor near Jefferson).  Lesson learned…again. 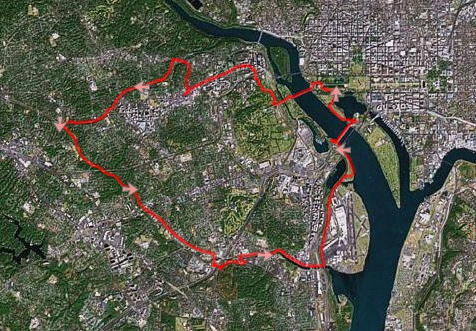 Oh – and I saw The Lazy Triathlete out on the Mt. Vernon trail around mile 13-14.  I was in a bit of a whacked zone at that moment, so it didn’t all mentally process until later.  He was clearly more alert than I though.

After that, I jumped on the bike and headed for a hard 20 mile ride.  In the rain.  Actually, let me correct that.  In the elephant-sized leak of a rainstorm.  Pounding rain – rain that actually almost hurt.  And my helmet got another shower out of it.  But it was fun!  I was cruising through literally an inch or more of moving water at times.  Good times though – it keeps it enjoyable honestly.  After that I added water again and knocked out a few thousand yards in the pool.

Following that, it was time to cook dinner for a friend that came over.  It was good fun.  I made everything from scratch.  The two main dishes were:

– Watercress Salad with a Citrus Vinaigrette, paired with a Watermelon soup and marinated watermelon chunks 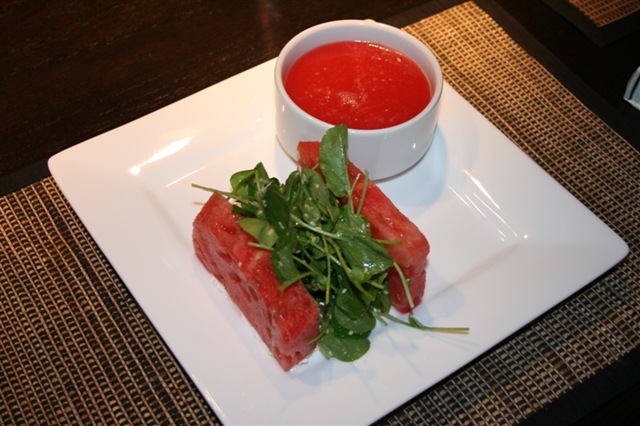 – Roasted portobello mushrooms over sauteed eggplant on a bed of baked phyllo dough, all on top of some reduced balsamic vinegar sauce 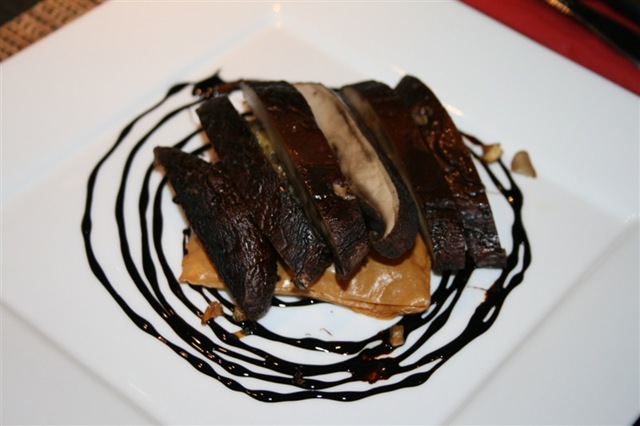 I had also started making baguettes from scratch, but they were late rising so I had to bring in some standby bread instead.  But tomorrow I’ll have fresh baguettes.

I decided I was slowly getting sick of the same cycling routes/trails.  I hit up this site, which has a ton of trails and rides listed for the DC area for cyclists, and picked one heading out to the shore.  I planned about 55-60 miles, or enough to keep me busy for 3 hours.  I printed out the cue sheets and then put them inside some plastic protectors and then folded and rubber banded them to my aero bars.  Perfect! 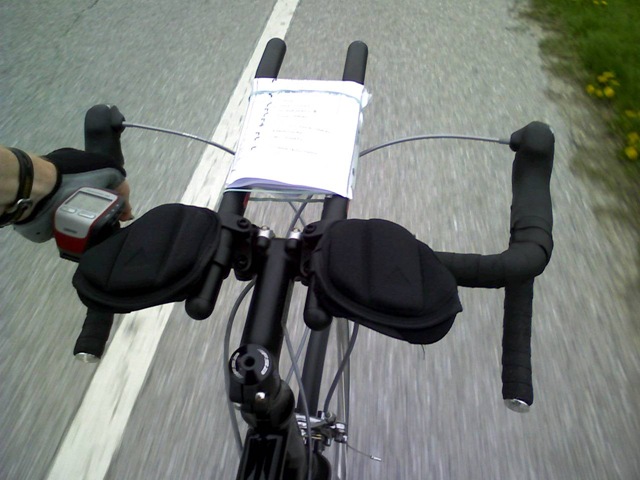 However, having very easy to follow and clear directions did not keep me from totally messing up three separate times.  In general, a point to point course should not look like a fork.  Mine looked like a slightly melted pitchfork.  SLB, now you can laugh at my chart.  Perhaps I should look at getting one of those Garmin Edge cycling computers that actually TELLS you were you’re going. 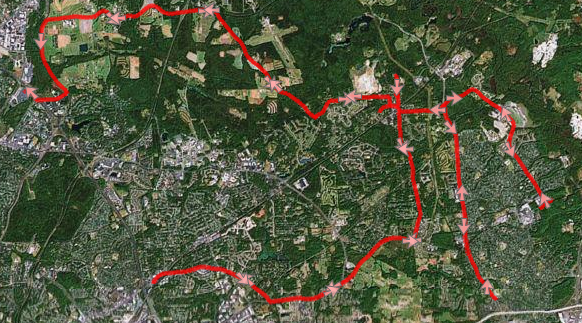 It was a really nice ride though (well, the parts where I wasn’t accidentally merging onto I-95N, or otherwise off course).  But the ride included cows and deer and rolling green fields and nice farmland. 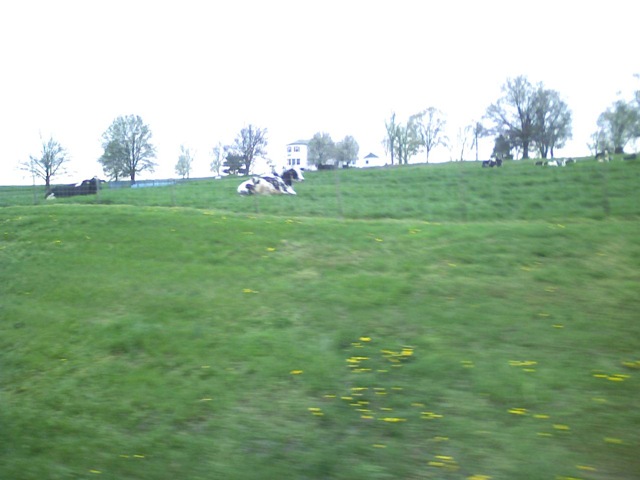 I have come up with three rules though that I need to implement for future cue sheet riding:

That said, one of these weekends I’ll make it to the shore successfully.

Following the bike, I did a quick brick and knocked out a 5K in 20 minutes flat.  Shortly afterwards I realized the training plan said “IM Race Pace” and not just “Race Pace”.  Doh.  Oh well.

Actually, not quite done.  I just finished booking my tickets to Wildflower – woohoo!