Before I could go get my new grill, I first had to knock out my Monday swim workout.  It wasn’t too bad though, it started off with a 2,000 yard continuous chunk of warm-up, drills and other technique focused stuff before finally getting into the main set.  Which then consisted of 1,200 continuous yards of 50’s at ‘very hard’ effort alternating with 50’s easy (nonstop).

Aside from semi-regular time trials, this was actually the re-introduction of speed back into the swim program after a winter heavily focused on technique.  So the first few times it’s gonna take some getting ramped up before I get these sets all worked out.  I was fairly consistent though in that I was hitting each of the 50’s on roughly 35 seconds a pop, with an occasional 33-37 tossed in for good measure.

The one nice thing about doing so many 50’s in a row is that you can easily see the effect of changing tiny stroke/balance/form changes and how it impacts the clock.  This is a bit harder to do on full out 100’s where you may tire faster.  So lap to lap you can quickly note how correcting minor issues saves you a second here or a second there.  Anyway…fun times.

What was more fun though – was going to pick out the BBQ!

After much deliberation my choice essentially came down to the ability to fit my requirements into my deck space – which unfortunately eliminated the Webber.  So, I found another grill that had all the features I wanted, and if it only lasts five years…then so be it (it then gives me an excuse to buy another grill!) :).

Upon getting it back home, the girl and I teamed up to put it together as fast as possible – as it stood between us and dinner.  Thankfully we also picked up some extra appetizer food, otherwise we might have starved to death.  The packaging was highly optimistic in the amount of time they thought it would take to put together, and that was for one person!  My living room quickly became a disaster area.  (Side note, somehow along the way I managed to snap in half a small SD card for my camera, so the unpacking pics got lost, cameras fine though – so only $20 down the drain.)

Of course, the packaging didn’t take into account a massive BBQ maneuvering dance that had to occur.  Getting the old one off my tiny deck (past my table/chairs/plants/etc..) and getting the new in it’s place. All without accidentally losing a limb or BBQ off the edge of the deck. 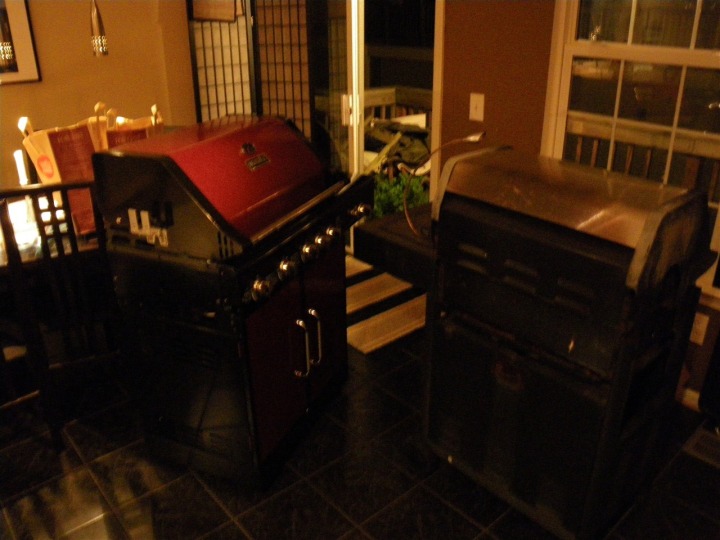 Like all traffic jams, after much stop and go action – we finally got it in place…at 11PM.  The first and most important order of business was to get our two little Cornish hens onto the rotisserie and get em’ cooking!  Now, this grill has infrared heat on the back panel and one of the four main burners, which makes for some awesome and even searing.  Here’s a longer exposure pic I took at  last night where you can see it spinning away into the darkness.  Interestingly, during the day you can’t see the red color at all on that back burner – it’s completely invisible (though hot as hell!). 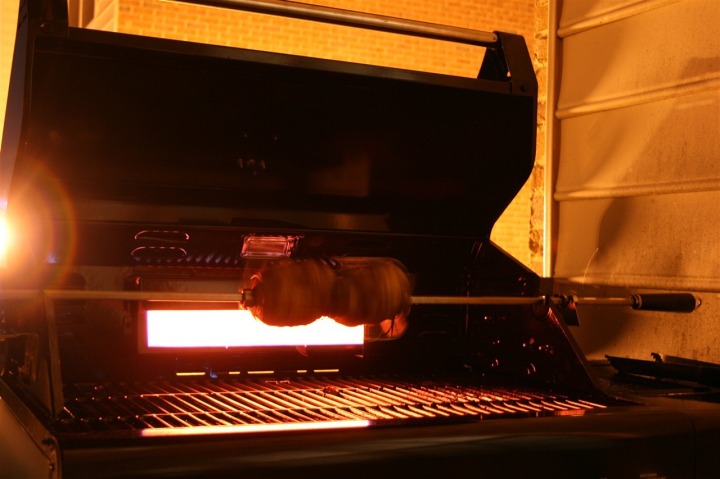 And here’s the final resultant (at midnight…): 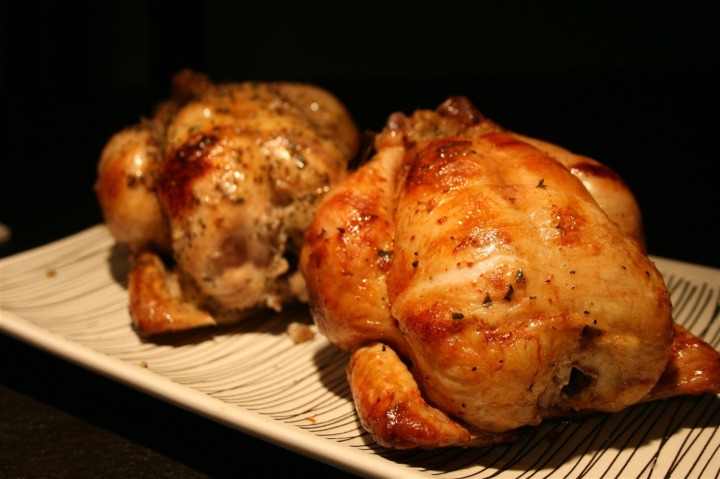 Of course, my rotiserating was not yet done.  Today for lunch I stuck a full chicken on there and rotiserated it as well.  This also allowed me to finally see my grill in the light of day – and all it’s red glory along with it: 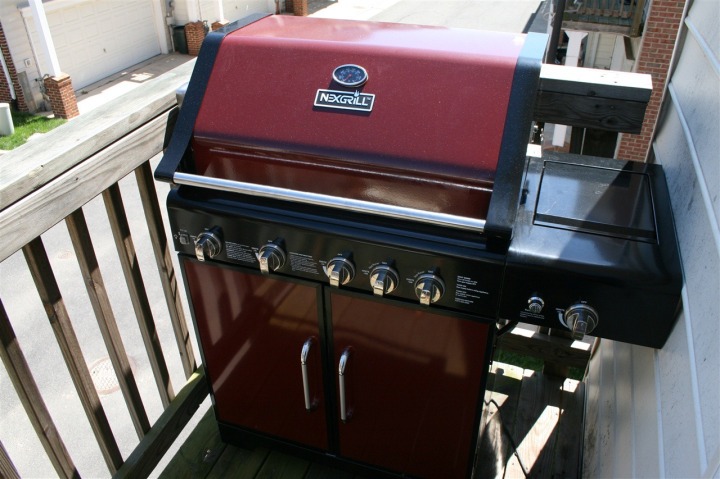 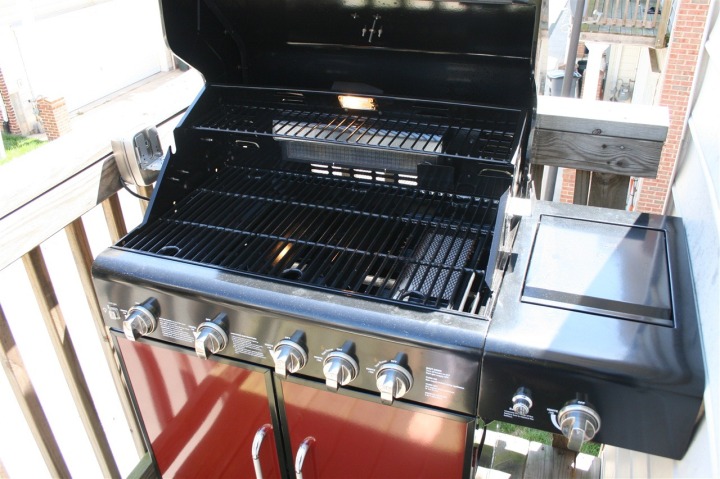 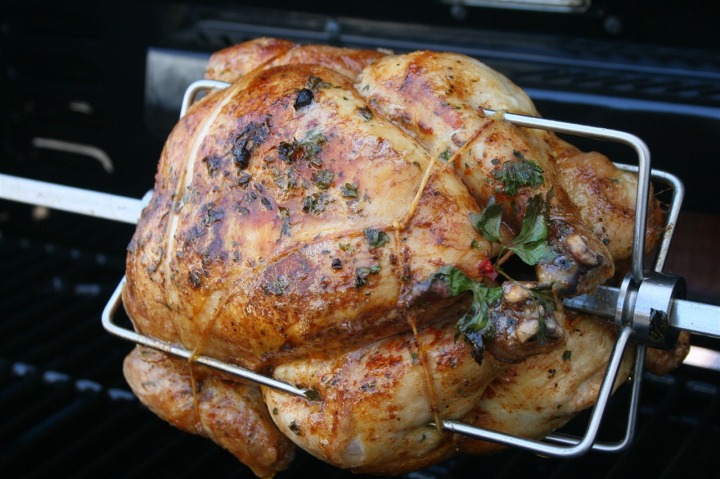 The chicken, like the hens also came out spectacular – probably the best rotisserie chicken I’ve ever had from anywhere: 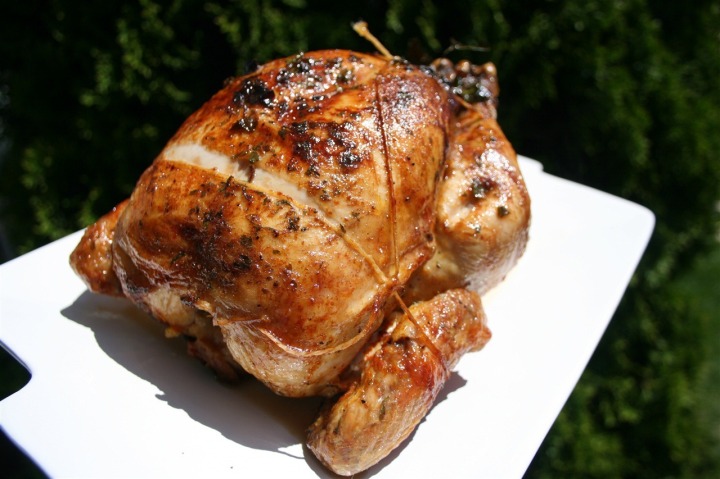 Mmmm….so good!  One of the things I’m liking about doing rotisserie chicken is it’s completely hands off.  I stick it in there on low heat on the main burners and the back burner infrared heat, and then 75 minutes later I come back and eat it.  No watching over it required.  This allows me to continue to do work/conference calls/etc… all day long.  Nice!

I’ve been making lots of fruit salad as well lately.  Now, the girl and I are only using fruits you actually WANT to eat.  Strawberries, watermelon, pineapple and grapes.  Let’s be honest – nobody actually wants the green melon in their fruit salad.  It’s filler.  Our creation was awesome however: 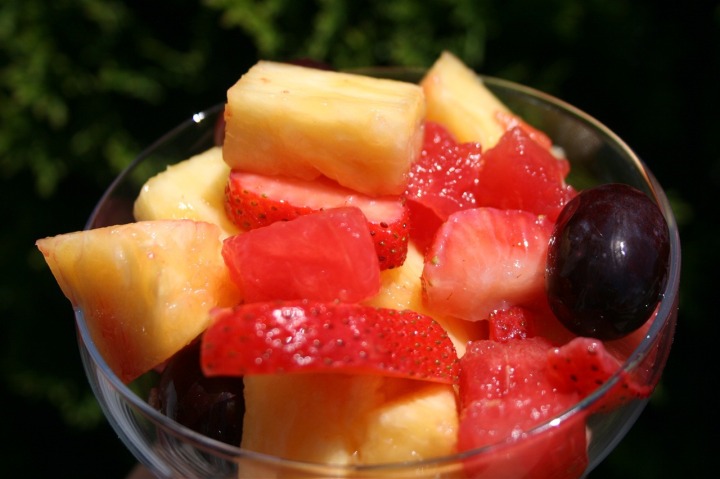 This evening, I had a 18-miler to accomplish.  Which, by the end of the run I have to ask… How on earth did I get to the point where it becomes ‘normal’ to run 18-20 miles on a Tuesday evening every week?  At some point I turned off Normalcy Street and onto Nutcase Lane. :-/

Similarly nutcase was my route.  I picked up/dropped off other friends along the way, and did a lot of wandering.  You really have to sit back and stare at it to really appreciate how whacky the route was.  Seriously, I couldn’t make this stuff up if I tried: 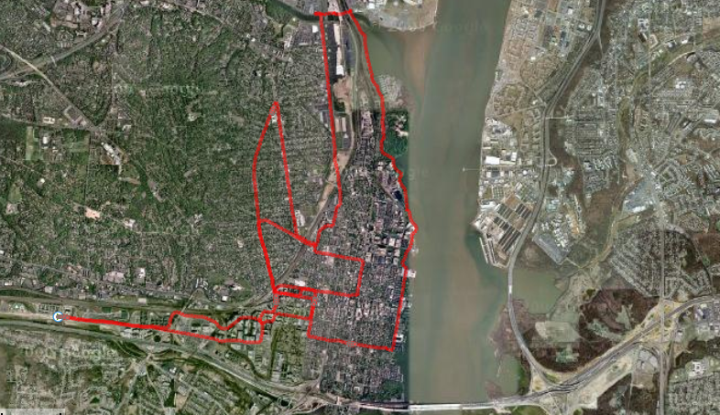 Anyway, that’s all I got.  My dinner is almost ready to eat (pasta, not chicken…).  Gotta run!