The good news here is that I can outrun a police officer.  For about three miles anyway’s.  The bad news is that when you want to find one – they’re nearly impossible to find.

Last night was costume night at the Pacers running group I go to on Tuesday’s & Thursday’s.  A group of us that often run together decided to go dressed as escaped convicts (aka Jailbirds), along with a police officer chasing after us.  Three of us had run the marathon on Sunday, so we were a bit slower than normal.  And we took the shorter 3 mile course instead of the normal 5.4 mile course.  A number of other folks also dressed up as well.  Here’s a few photos from the evening (I’m on the far left). 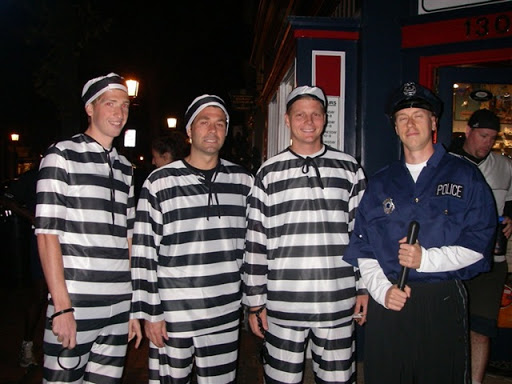 As an side, afterwards, we tried to find a real cop to get a couple of photos with his car.  Now normally in our little town – finding police officers is about as simple as walking to the street.  But we searched for OVER AN HOUR and couldn’t find them.  We even checked (via running) all of the usual spots (ya know, like the doughnut shop), including the police station.  None to be found.  We did find a Parking Enforcement dude, and  Metro Transit police guy, but they weren’t the same.  Of course, on the short drive home I came across two bicycle cops, three parked police cars and two driving police cars.  Go figure. 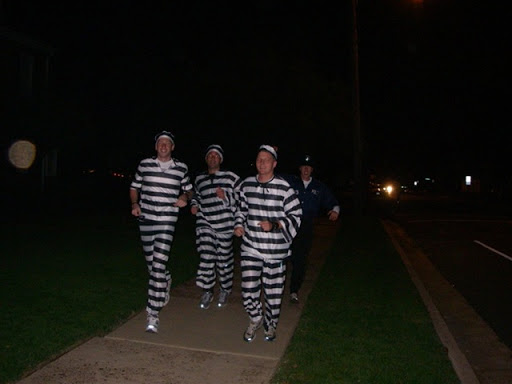 It was funny some of the looks we got.  Many people clearly enjoyed it and we got some fun comments.  But there was this one young women who gave us the most icy cold stare ever.  It was downright nasty.  Not sure what was up with her.  We decided it took like 10 comments to make up for her one evil eye stare. 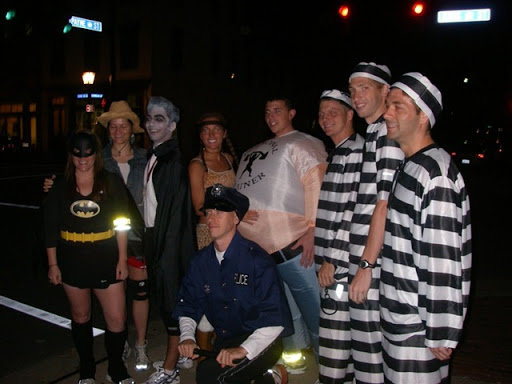 I got on the bike trainer this morning instead of going outside.  I really would rather have gone outside – but I wanted to take it easier on the bike and simplify my prep time before work.  After work, I went out and did intervals.  Because I was super-limited on time and didn’t have any to spare to go to a track – I had to use a straight/flat piece of paved pathway where I work instead of the track.  But it was easily measured out for 1/4th of a mile.  The goal for today was 95s per 400 (or a 6:20/mile pace).

So the good news here is that I didn’t have any problems getting up to pace today, which was a concern of mine given I’m a touch bit sluggish still.  The bad news is that I ran too fast for my scheduled intervals, nearly 8-10 seconds faster than planned.  I need to split out my marked path into 100m increments so I can better judge speed.  Or I need to tweak my plan to go faster.  I didn’t feel tired at the end of it though – so I may just need to tweak plan to either add more, increase distance or increase speed.  Back to the speed books I guess for more consultation.

Oh…and because I didn’t have enough training fun yet today running around, I added more running later on.  I went for a casual 5.5 mile run with a new found friend.  We’ll call her M.  That was good times though.  Much better than intervals. And a good way to end the day. 🙂