“You need to take your vacation”

So I was told today I need to find a way to take 120 hours of vacation time before the end of the calendar year.  Further, that doesn’t include 48 hours of holidays that occur during the period (we get off Turkey Day + 1 day, X-Mas + 1, and New Years + 1).  So that equates to FOUR weeks of vacation I need to figure out how to take in the next eight weeks.

It’s partially my fault.  Apparently my company has this ‘concept’ called vacations, and apparently I accrue hours over time, and apparently I might not exactly have taken any ‘vacation’ time in *cough* a few years.  Sure there have been a few days here and there, but I guess I didn’t really make any dent in my accrual rate.  With that 120 hours I was just going to forfeiture it at the end of the year and be fine with it (and I wouldn’t get the hours paid out either if forfeited).  But apparently my boss and my bosses boss weren’t so fine with it. (Note, there were a lot of apparent things today).  They actually believe in the whole ‘work-life’ balance thing.  Go figure!

So…any ideas?  Where should I go?  I’m planning on going back to Seattle for Christmas for a few days.  But that leaves me with about three additional weeks to twiddle my thumbs.  Anyone up for some long rides?  Or runs?  How about a swim across..say..the Atlantic? I’ve got a lot of spare time on my hands until the new year.

So, I’ve been watching the weather for the Philly Marathon (I’m running the half).  While I’m normally a Weather.com kind of person, I found that Accuweather has a 15-day forecast, probably not super-accurate – but better than nothing.  Yesterday, it was showing snow for the days leading up to that weekend.  Today it’s just showing cold.  Like really sorta cold – low of 31*.  Now I know I said I love the cold (and I do), but I don’t love it quite yet.  I’m still acclimating to not being able to wear shorts and short sleeve T-shirts every day.  So…perhaps a touch bit warmer would be better, mmm-k?

I decided to do something with some of the pumpkin I had.  So I made a pie.  And I’m not talkin’ no canned stuff either – real chunky/stringy pumpkin guts that I got from a real live pumpkin.  Puréed into smooth pumpkin guts, and then tossed with some cinnamon, fresh nutmeg and a few other special somethin’s and then into the oven for a little under an hour.  Out comes my creation: 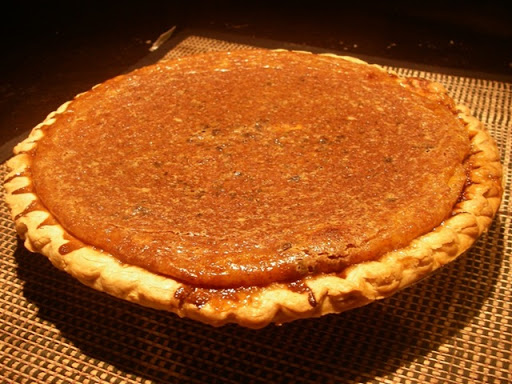 I had a little extra batter, and a little extra dough, so I made some mini-pumpkin pie’s as well using some small ceramic dipping thingies I had, they’re about 1″x1″ in size. 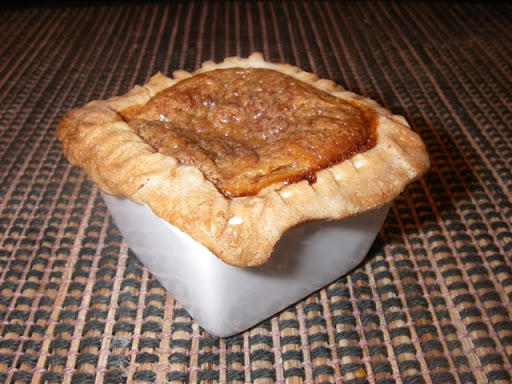 Yes, the above probably violate the man-laws.  But I can redeem myself by also doing slow cooked BBQ Pulled Pork. 🙂  And the above taste really damn good.