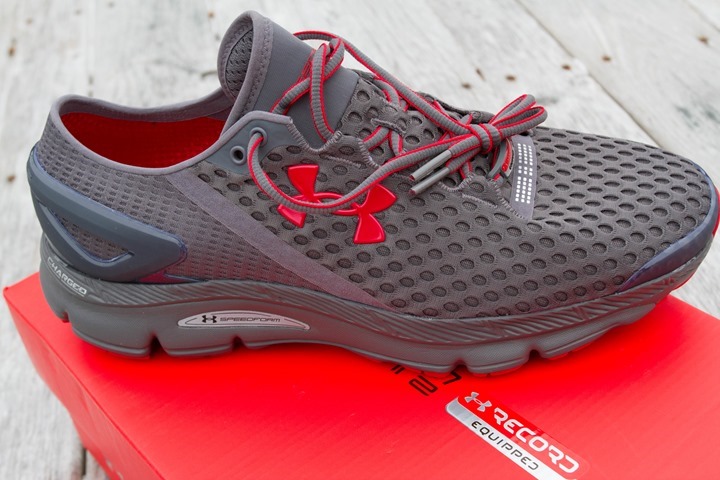 Over the last few weeks I have charged a water bottle, charged a pair of sunglasses, and most recently – ‘turned on’ a pair of running shoes.

As part of today’s HealthBox announcement, Under Armour is announcing the next generation of the UA SpeedForm Gemini running shoes, the Gemini 2 variant.  But as regular readers here know – I don’t generally do shoe reviews (well, ever really).  So why would I be posting about these shoes?  Well, they’re…alive!

Or, connected at least.

See, Under Armour technically has two variants of their Gemini 2 shoes, and the one I’m talking about today is the one that’s ‘Record Equipped’, which is a swanky marketing term that basically means it’s got smarts.  Officially the shoe is known as the: UA SpeedForm Gemini 2 Record Equipped. 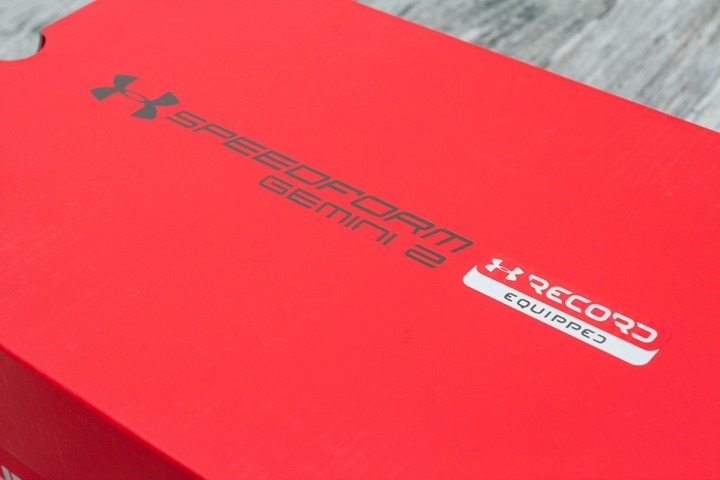 I’ve been using a pre-production unit (Perhaps it’s units because there are two shoes?) on all my runs the last few weeks, through snow, ice, and everything in between here, cold parts of Canada, and France.  Let’s get started.

Oh, before we start, note that this isn’t a review.  The shoes don’t come out till late February, and there’s a small listing of caveats on what Under Armour has allowed the press to discuss, which I outlined in my other Under Armour post for today.

Like my Polar Balance scale unboxing, the Gemini 2 is pretty straight forward from an unboxing standpoint.  First, here’s the box: 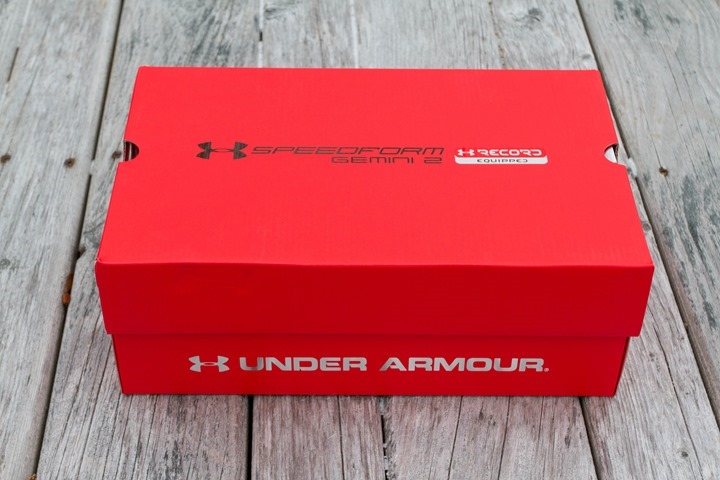 Next, it’s got a space blanket…err…tin foil(?) inside to keep it protected.  Or just to make a racket when you take the shoes out.  Either way, it does look pretty. 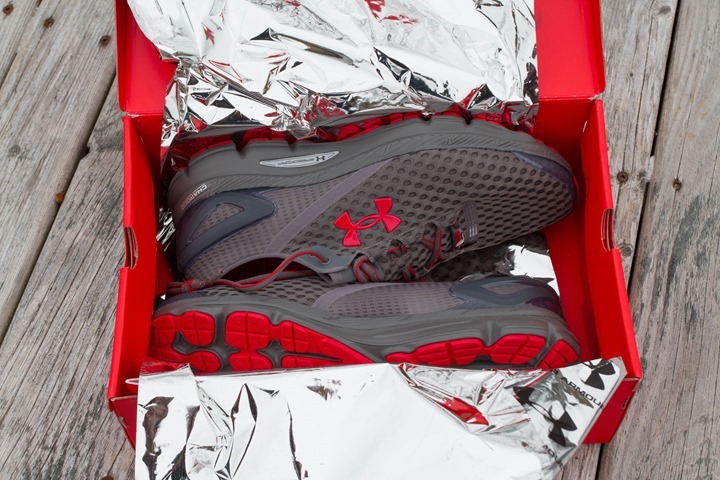 Inside you’ll find two shoes, though only one of them is smart.  The other is dumb. More on that in a second. 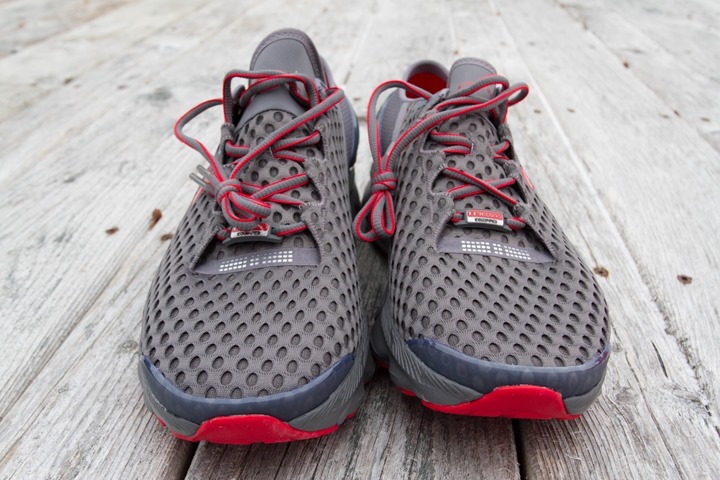 There’s also a few pieces of paper probably telling you not to stick them in the microwave or ‘Bad Things’ ™ will happen.

You’ll note on the front of the shoes there’s tiny little tags that say ‘Record Equipped’, allowing you at a glance to distinguish these from the non-smart version. 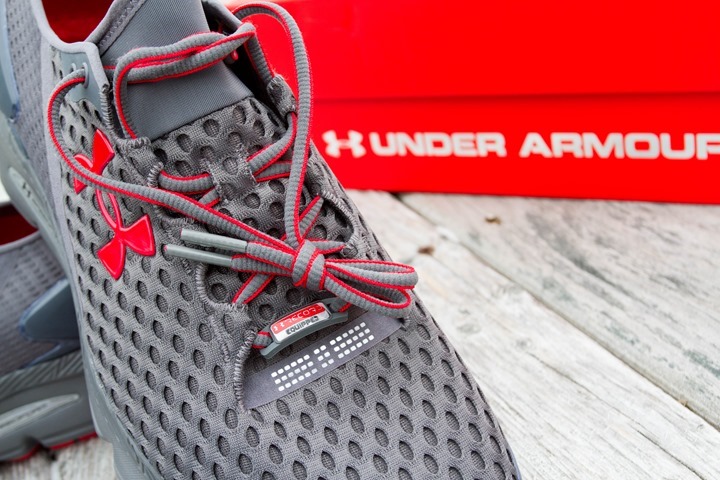 Let’s move on and talk about what ‘Smart’ really means though. 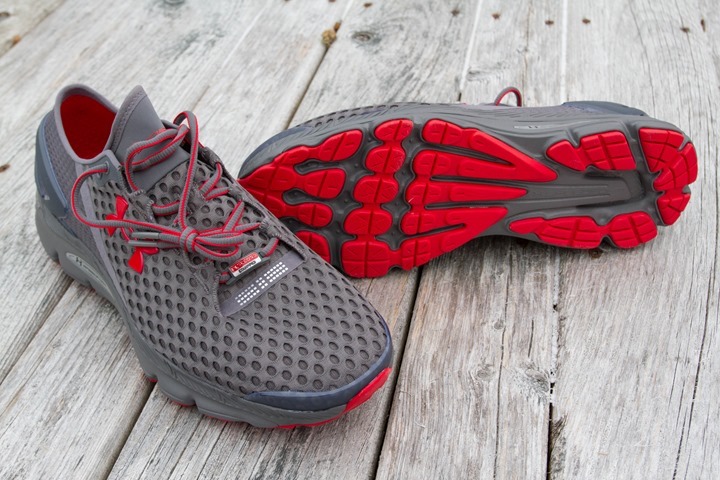 The Record Equipped Gemini 2 essentially contains a hybrid between an activity tracker and a footpod.  This sorta goes back to the days of the Nike footpod’s that you could plop in certain Nike shoes.  The main difference though being that with the Gemini 2, the pod is permanently located within the body of the shoe, there’s no method for re-use. 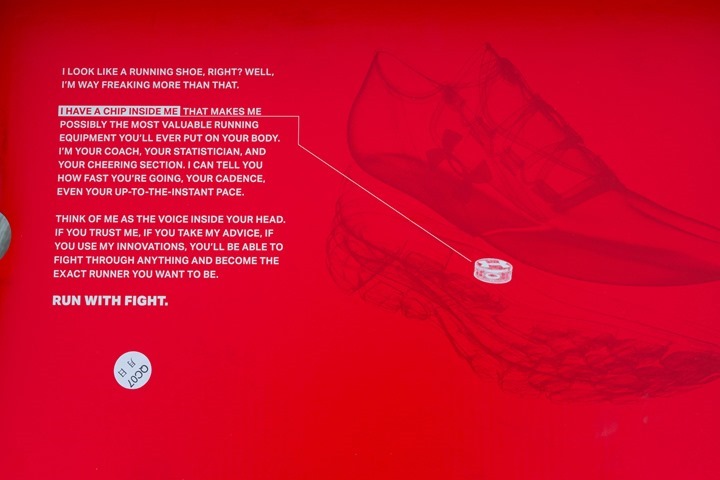 In the case of the Gemini 2, it’s the right (not left) shoe that has the pod within it.  You’ll notice the shoe carries with it a small FCC compliance label indicating electronics inside: 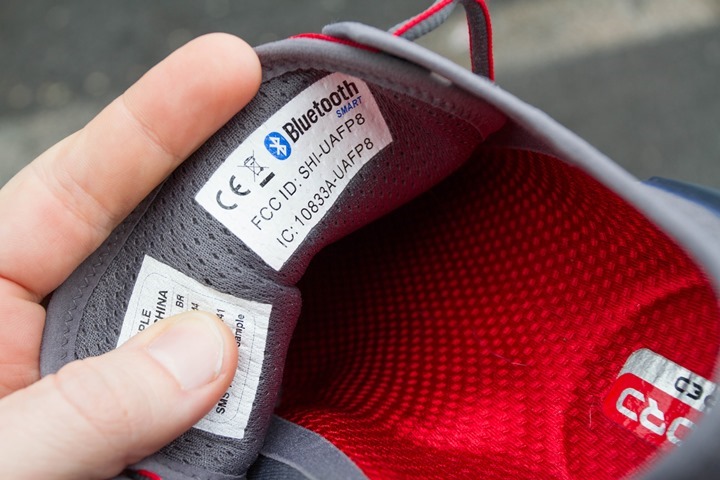 There are essentially two modes to the shoe.  The first is just as a normal activity tracker.  Anytime the shoe is moving, it’s tracking your steps.  No battery charging needed, it just does its thing.  These steps show up in the Under Armour Record & MapMyFitness platform/app pages: 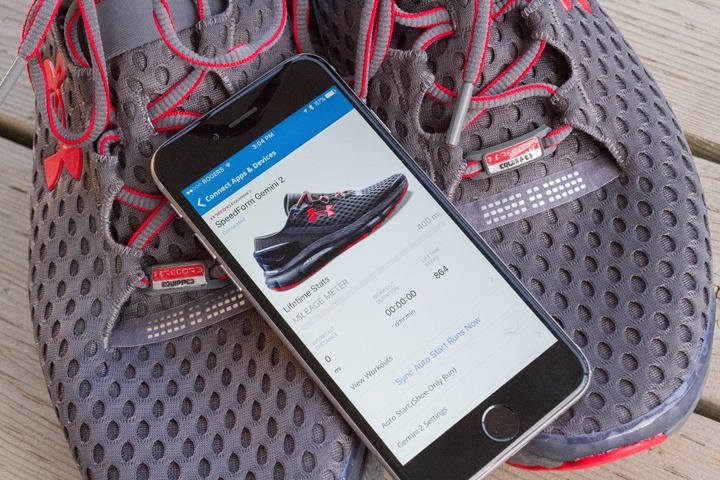 But most of us aren’t wearing our (likely wet and stinky) running shoes all day long after our runs.  Or at least, not the same pair as the ones we just ran in.  So given that, UA is really focusing more on recording your workouts. 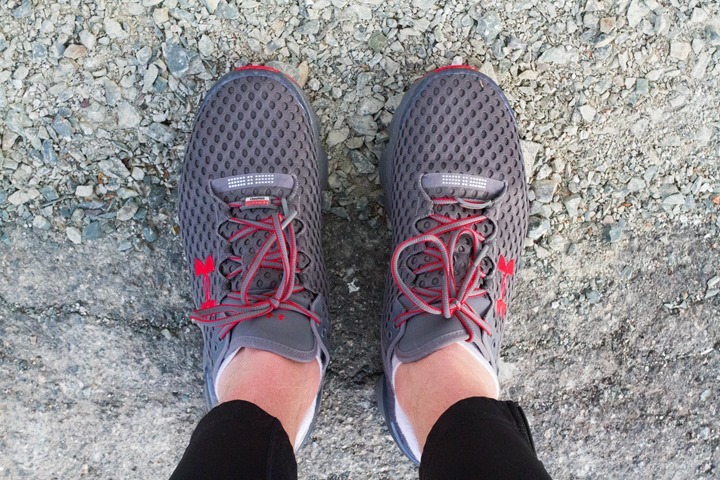 There’s essentially two ways you can use the shoe in that capacity.  One is assisted with the UA app, and the other is solo-style without any assistance.  When using the app it’ll force start a workout and then track and communicate the details to you via the app. 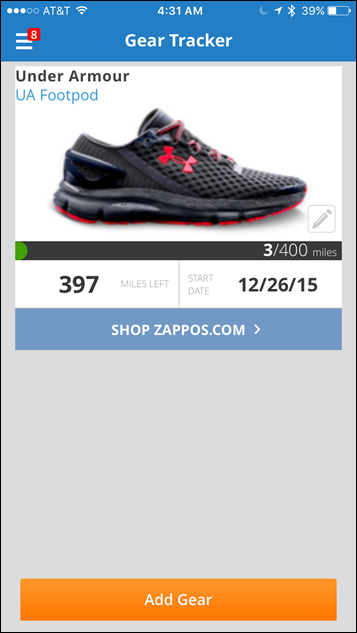 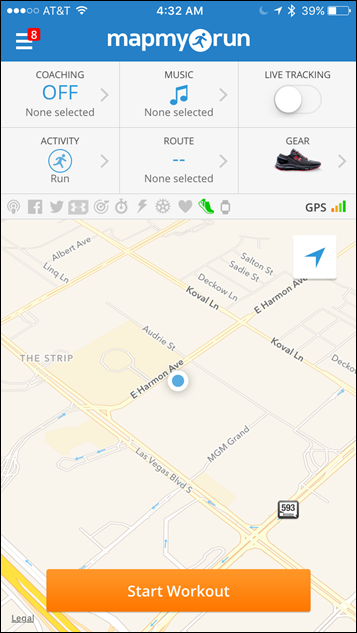 But my favorite is the ‘Auto Start’ version, which automatically figures out when you’re running and then tracks that as a standalone workout – capturing pace and distance, as well as cadence. 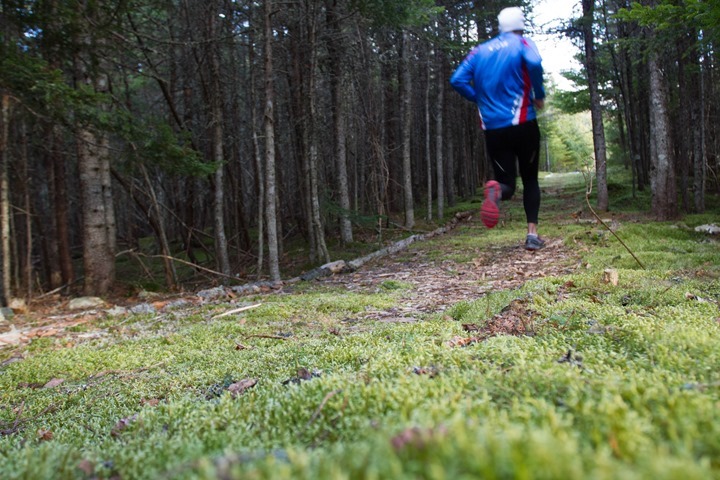 You can see the ‘Auto Start’ option here.  Basically by the time I got back to my phone, the app had already sync’d the run, rather impressive. 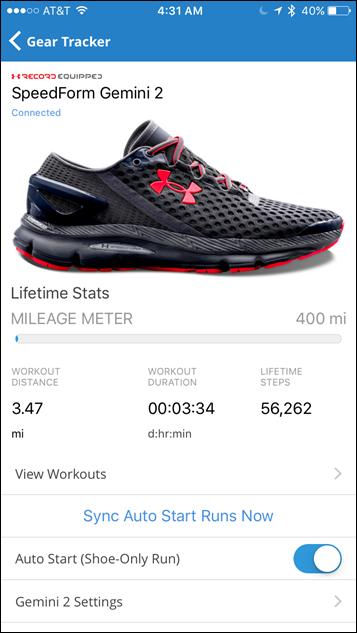 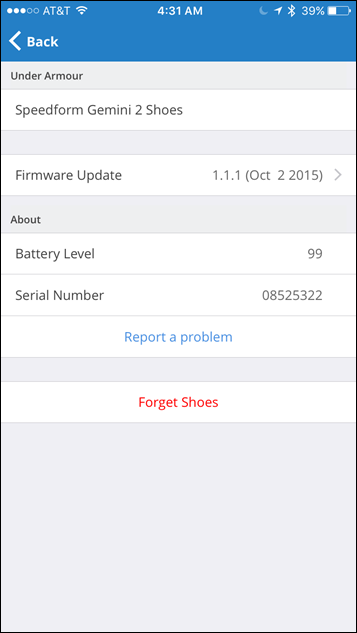 Now, I did run into one minor beta software snag, where my runs weren’t ‘counting’ once uploaded.  There appeared to be a bug that if I ran with the UA Band on the same run, that workout would ‘override’ my shoe run.  It’s a minor software bug that I’d imagine will be worked out by release at the end of February.

When I didn’t run with the UA Band at the same time, it happily showed my workouts as being ‘Record Equipped’ within the UA app. 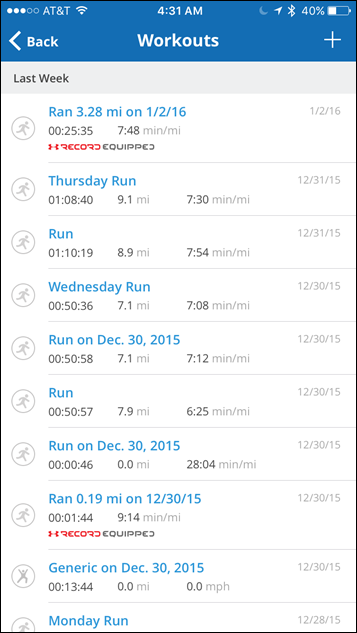 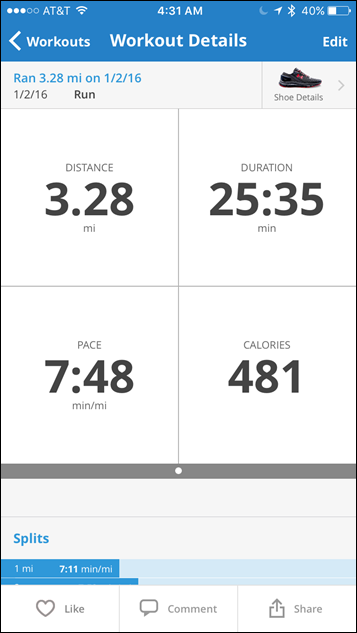 The whole thing worked pretty flawlessly technologically once I understood what was going on.  The only complaint I had is more of a shoe-fit item than anything else, which is definitely going to vary from person to person (for me, it rubs a bit on the upper right portion of one of my feet).  But as any runner knows, finding the right shoe for them is going to be an overriding factor – technology or otherwise.

Oh, one last interesting note – the Gemini 2 does show up as a standard Bluetooth Smart footpod, and is recognized by 3rd party apps.  I haven’t tried a run with 3rd party apps yet, but it seems to be going in the right direction. 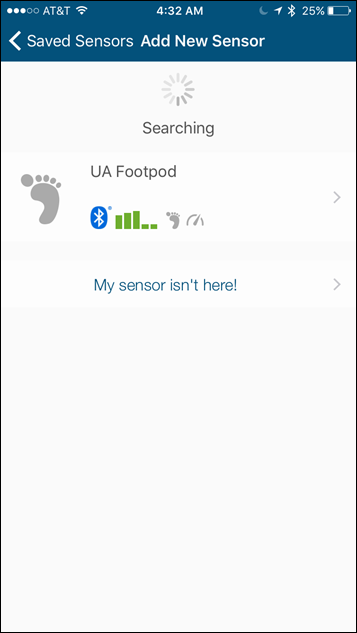 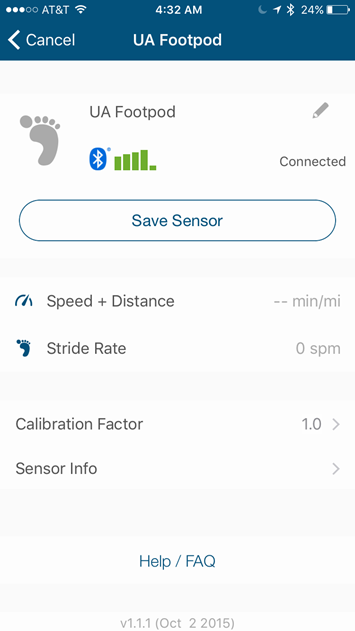 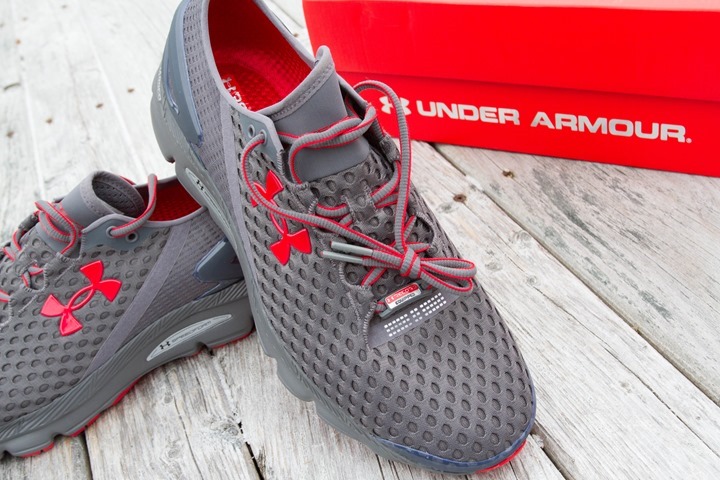 It’s funny, on one hand, the technology isn’t really any different than a footpod or an activity tracker.  Both of which are sorta old-hat to me.  But it’s the insertion into the shoe that makes it oddly kinda neat.  Even more so on the activity/step tracking front.  I’ve been using the shoes a lot more for day to day walking as of late, just to accumulate steps – and it’s funny to not have to think about wearing a band at all to capture that data.

On the flip side, there are definitely some downsides to having the pod in the shoes.  First is price, the Gemini 2 ‘Record Equipped’ version will retail for about $150, approximately $20-30 more than the non-smart version.  Most of us retire our running shoes after about 500 miles or so, meaning that you’re throwing out a perfectly good footpod & activity tracker well before it needs to die.

Most footpods are in the $40-$60 range, so basically you’re talking 2-3 pairs of shoes worth, and most footpods will last years on $3 coin cell batteries before you manage to kill them in ways that a simple battery replacement won’t take care of.  If you’re doing 500 miles every 3-5 months (a safe bet for most runners), that means things get expensive quick.

If I was in UA’s position being the only company with a footpod/activity tracker baked in their running shoes (to my knowledge), I’d have simply made that be the baseline.  It would have been a marketing differentiator for a company that isn’t really known as a big running-specific footwear brand (or even much of a major shoe brand at all).  Given UA’s current stance that sports technology is a critical market for them to capture going forward (and they’ve spent massive amounts of money towards that goal), I’d have thought that luring folks in early would be an easy play for them.

Still, the week at CES here is still young – so you never quite know what it’ll bring on the connected footwear space.  But I’m pretty sure it’ll definitely be an interesting year for it.