Fitbit’s Bad Day: How it ended up with multiple optical HR lawsuits, and a 20% stock drop 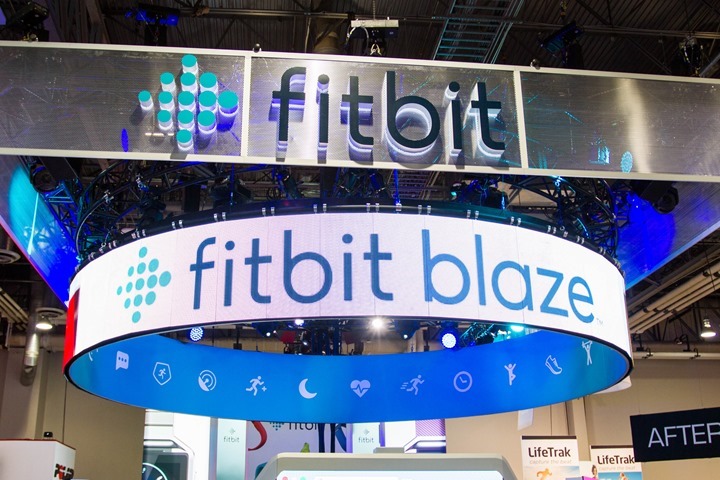 For the San Francisco based firm Fitbit, yesterday was likely the mother of all bad roller-coasters.  They started off the morning at 7:30AM with a packed press room in the Las Vegas Mandalay Bay Convention Center with the launch of their newest product – the Fitbit Blaze ‘smart fitness watch’.

But within 30 minutes of the press event things started to unravel – when not one, but two totally unrelated lawsuits were filed and announced.  One a multi-state class action lawsuit alleging inaccurate optical HR sensors.  At virtually the exact same time that news broke, both mainstream and non-mainstream press alike panned the just announced Fitbit Blaze, causing significant investor concern which led to a selloff and nearly a 20% drop in stock price.  Or, ~$1.1 billion USD drop in market cap.  Yes, a bad day indeed. 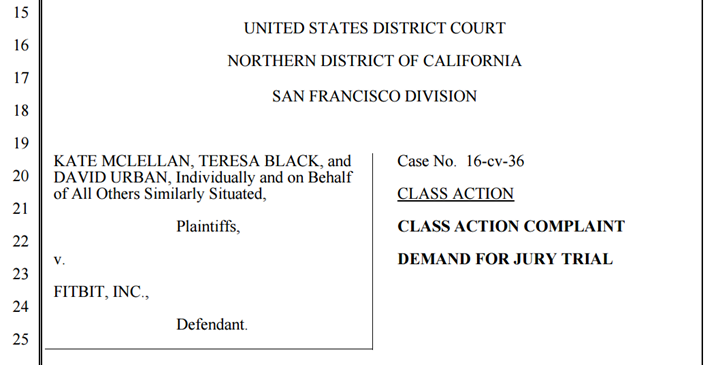 First up is a multi-state class action lawsuit that alleges that Fitbit’s optical HR sensor within the Fitbit Surge & Fitbit Charge HR products, is inaccurate at higher intensity levels.  The lawsuit claims:

“Far from “counting every beat,” the PurePulse Trackers do not and cannot consistently and accurately record wearers’ heart rates during the intense physical activity for which Fitbit expressly markets them.”

Now, this is obviously something that’s well within the ballpark of things I tested.  A lot.  And in fact, there’s definitely some truth to this, but not quite as much as the plaintiff’s want.  You’ll remember that I found that it was slower to react than I would have preferred, but eventually did catch-up – even in high intensity running.

Now, my guess is that the plaintiff’s will explore other exercise areas such as those in gyms that focus on wrist movements, an area that wrist-based optical sensors struggle with more.  Areas such as kettle ball usage for example.  Basically anything where your wrists are fully taut and at high intensity heart rates.

Now, in reading through the 42 page filing, it really centers on a couple of key items:

There are some minor ancillary things they’re upset about, but the above is basically the gist of it.

So how is it dangerous to your health?  Well, here’s the applicable snippet from one customer:

“Plaintiff Urban is a fitness enthusiast who signed up for his first marathon in mid-2015. Given his father’s history with heart disease, Plaintiff Urban’s doctor recommended that he keep his heart rate from exceeding approximately 160 bpm…

…Even at high intensities it never displayed a reading over 125 bpm. Plaintiff Urban then cross referenced his Surge against his chest strap based triathlon monitor and found that the PurePulse Tracker consistently under recorded his heart rate at high intensities, often by as much as 15-25 bpm. In order to train effectively and safely, Plaintiff Urban needs to accurately record his heart rate during exercise so that he can reach, but not exceed, certain intensity levels. He cannot trust his Surge to deliver those accurate readings.”

All of which is a logical progression of thought, in theory.

But here’s the problem with this line of thinking: You can just as easily get an inaccurate chest strap reading too.  Why aren’t people suing Polar, Garmin, and Suunto and countless others making HR straps?  Up until the rise of optical HR sensors – one of the most frequently searched questions on my site was how to fix erratic chest strap readings (usually due to lack of sweat).  The symptoms were often very similar – either excessively high or low readings.

Which isn’t to say optical HR sensors shouldn’t be held to a higher standard – they absolutely should be.  It’s a core thing I’ve been doing here in holding companies accountable on poor performance.  But at the same time, it’s important that we don’t lose perspective on what that standard is or was with classic chest straps.

The lawsuit goes on to give examples where there are differences in readings between the Fitbit and other devices.  However, it makes some somewhat over the top statements that things often failed to record above 110bpm. What defines often?  More than 10% of the time? More than 50% of the time? 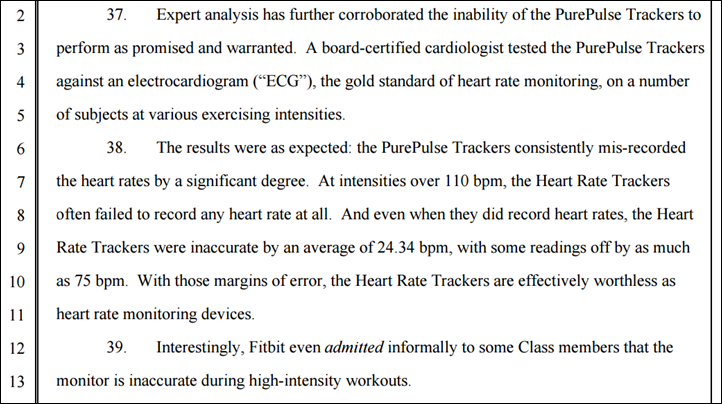 Either way, in talking with folks in the industry about this lawsuit this morning, there’s a lot of people scrambling to update websites today noting that their HR sensors (of all variants) are not designed to be suitable replacements for medical equipment (a statement you’ve undoubtedly seen numerous times before). 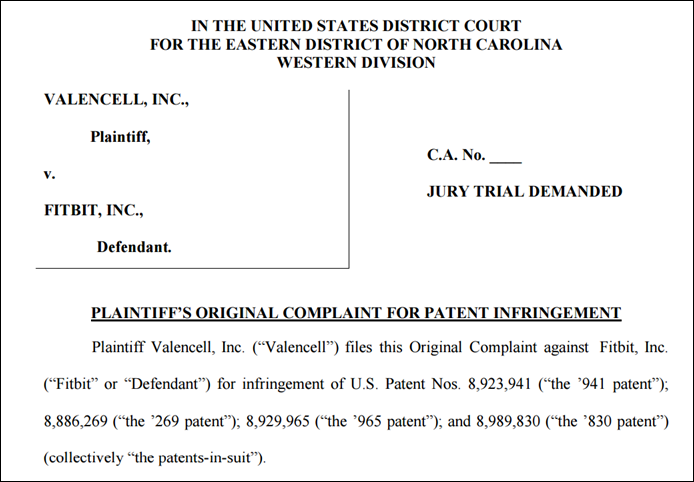 Not to be left out of the party, near simultaneously Fitbit and Apple were sued by existing optical sensor maker Valencell.  Readers here will be rather familiar with the company, as they supply optical HR sensors to one of my favorite optical sensor products – the Scosche Rhythm+.

The complaint alleges that both Fitbit and Apple met with Valencell in various locations and at various points to discuss using the sensor technology (licensing it).  However, it goes on to state that after neither licensed Valencell technology, both companies infringed upon patents by the company in a variety of areas.

You can read the entire lawsuit here against Apple, and here against Fitbit.  They’re actually really interesting reading, especially some of the quotes that various employees reportedly made while in the Valencell booth at CES in years past.

Now I don’t know enough about the very detailed particulars of the algorithms, chipsets utilized, or implementations of those in any of these products to make any determination of whether Valencell’s claims are accurate, since they require insider knowledge to know the answers to.

However, there are a few things I find interesting or notable:

A) If Apple and Fitbit did steal this technology – then…ummm…why are their optical HR sensors so much more inaccurate than Valencell’s (that they allegedly stole)?

B) Valencell noted in the complaint they are seeking a licensing royalty from each of these sets of devices.  This is interesting when combined with data from the unrelated class action lawsuit which specifies the number of optical HR sensing devices that Fitbit has sold about 3,015,000 in just Q1 of 2015.  If sales were even over the year, that’s around the 12 million unit range on optical HR sensing units.  And that’s before we even start talking Apple Watch numbers.

C) I’d be curious how/why companies like Garmin, Mio, Samsung, LifeQ, and numerous others wouldn’t be party to this sort of thing with their technologies.

The result of this lawsuit will definitely set the course for future legal action within the industry around optical HR sensing – an area that’s starting to explode with interest.

Now what happened outside of the lawsuits is perhaps the most interesting news of the day: Investors and analysts actually got smart on the products.  I know this sounds silly, but the reality is that until this point, I hadn’t seen much independent thought in the segment (sports technology) from that crowd.  Instead, it’s usually filled with incorrect guesses that end up working out purely by brand associations.

However this time – everyone got it: The Fitbit Blaze was a product launch disappointment.  It missed the mark.

It was clear within minutes of leaving the press room (which probably had 150-200 people in it) that people were left a bit unclear on the direction of the product.  After exiting I had plopped myself down on the floor against a wall outside the room to write, and could overhear numerous phone calls being made all echoing the same sentiments.

It only took mere minutes for that news to make it to the markets, causing Fitbit’s stock to drop some 18.5%.  Today, they’re down 6%. 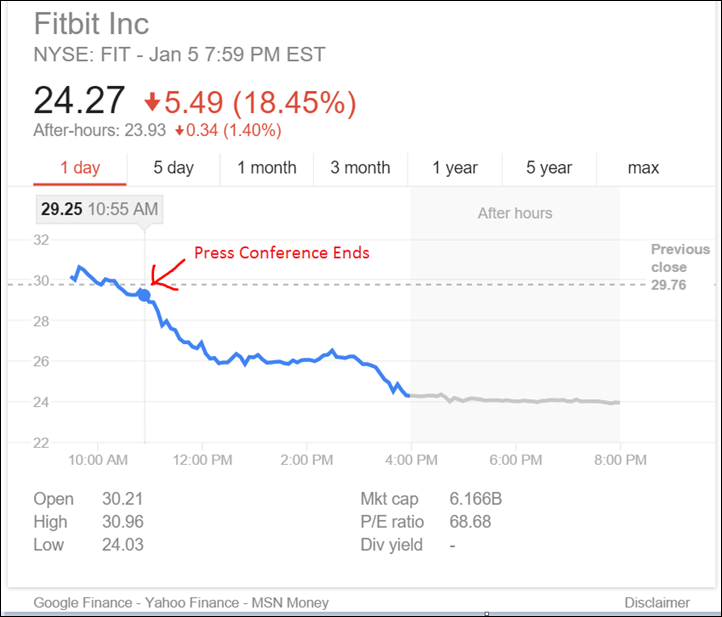 There’s so many facets to this that are interesting:

This is impressive.  This means that we’ve moved on from these devices being ‘all the same’ in the mainstream media’s eyes, to actually comparing very specific fitness features.  The same features that commenters say that ‘nobody cares about’.  Clearly, people do care about them.  A lot.

But, going back to the press conference – I wonder about one specific decision that was made by Fitbit: How much of an impact was it that nobody could even touch the screens on the devices and try them out?

Basically, following the press event, everyone walked up, snapped a photo at the front of the stage of two small rows of watches, and left.  End of story. 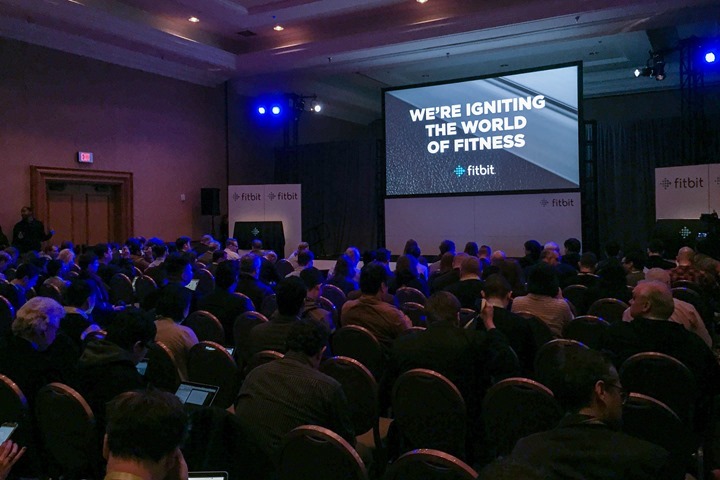 Had people had the opportunity to interact with the devices (as is common at Samsung, Apple, and numerous other press events), would that have changed things?

I bet it would have.  It would have attracted press to toy with features, and find interesting tidbits (like the Fitstar portions).  It also would have increased the people in the room’s time spent with those units, which undoubtedly would have bettered their opinion of it (even if only temporarily).  And, it would have delayed the onslaught of negative calls that I heard.  Likely changing those opinions from simply ‘Blah’ to ‘There’s one neat thing which is…”.  And that’s a huge difference in the fast pacing media world.

Today, at the main CES show, there are dozens and dozens of Fitbit Blaze units available to play with – and quite honestly, they’re much more impressive from a speed responsiveness standpoint and screen clarity than I got the impression at the press event.  Sometimes a little hands-on love pays a lot of dividends. 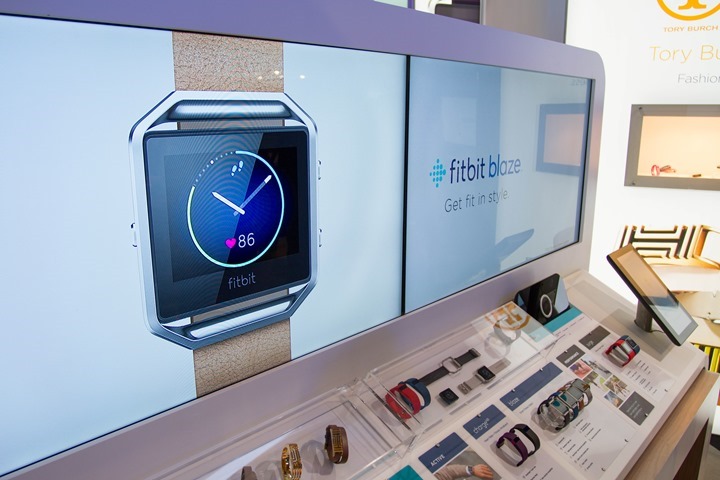 It’s ultimately a really interesting lesson in how the tiniest things in a product launch can snowball incredibly quickly into something really big.