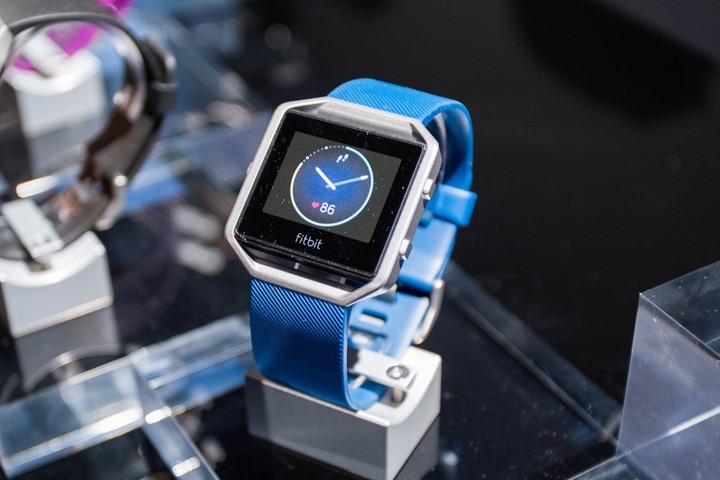 Update – March 2016! I’ve published my full Fitbit Blaze In-Depth Review here! Swing on over for all the details after extensive use!

Today at CES Fitbit announced their latest wearable, the Fitbit Blaze.  This new unit is effectively a smart watch designed around fitness.  Sure it tracks steps and sleep like past units, but it also has structured workouts (from Fitstar, which they acquired) as well as more common smart watch functions like music control, text/phone notifications, and a dedicated do not disturb mode.

The first thing you’ll notice is that the company has shifted away from the one-piece design of the Fitbit Surge, and moved to a modular design that allows you to change the bands quickly by popping them on & off – allowing a broad range of styles to ‘follow you’ throughout your day. 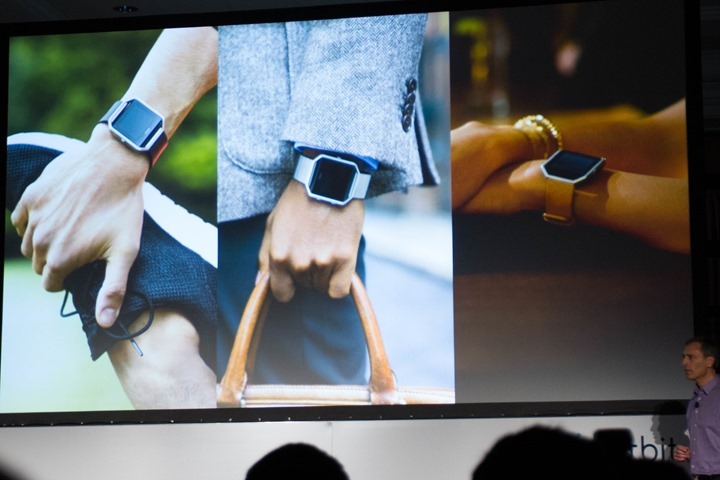 The unit is in many ways kinda like a Garmin Vivoactive teamed up with the gym features of the Adidas Smart Run GPS.  Except for the fact that the Fitbit Blaze surprisingly doesn’t have GPS in it.  Instead, it relies upon your phone for the GPS signal.  It can then leverage that phone connection (for GPS) to get pace and splits (which Fitbit calls ‘GPS connected’).  It also lacks proper waterproofing, a key and significant complaint of the Fitbit Surge and Fitbit Charge HR units over the past year (instead going with a generic ‘water resistant’). 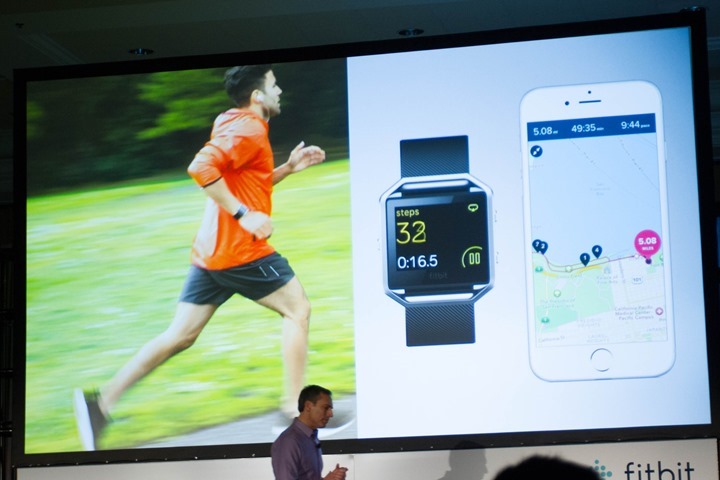 The company appears to have heard some of the concerns though around the optical HR sensor in the Fitbit Charge HR and Fitbit Surge, acknowledging that the Fitbit Blaze has improved HR sensing technology specifically to deal with high intensity activities (an area the Surge & Charge HR sometimes struggled).  Of course, like the rule of thumb goes – companies must prove that they’re accurate, and most companies in the industry can’t really be trusted on their word in this arena.  So the jury is still out on that one.  Still, Fitbit has been making some performance progress with their existing sensor over the past year, so it’s likely they’d be in the position to correct any remaining shortfalls via new hardware in the Blaze. 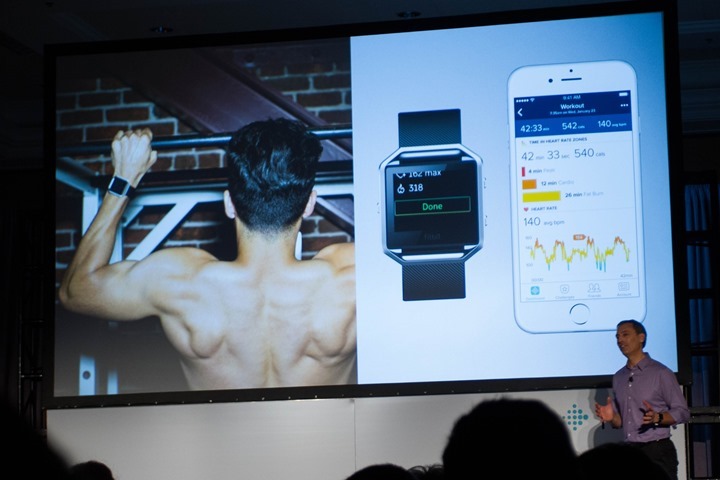 The unit is able to automatically recognize exercise from various categories, such as running, cycling, tennis, walking, and more.  It’ll automatically tag those workouts without you having to press start or stop.  It just does it for you, magic-style.  We’ve seen a few companies start to get into this area recently, with generally pretty good results for casual users (more exacting folks will still want to start/stop manually, which you can still do).

Most of the features the company talked about during the press event this morning are fairly standard issue for smart watches today, with nothing really sticking out as hugely unique or ground breaking.  Nonetheless, here’s a quick run-down of the main points: 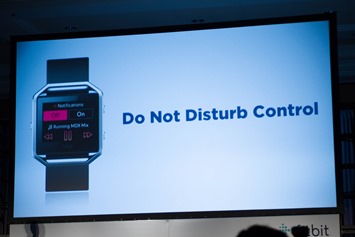 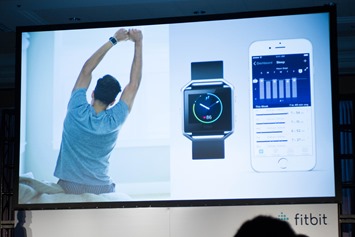 Probably the most unique feature would be the Fitstar workout integration modules, which pulls in structured workouts (gym focused at the moment it seems) for things like ‘10 minute abs’ and ‘7 minute workout’.  These workout modules give animated step by step instructions for each portion of the workout.  It reminded me quite a bit of what we’ve seen with the Adidas Smart Run GPS and their gym workout section. 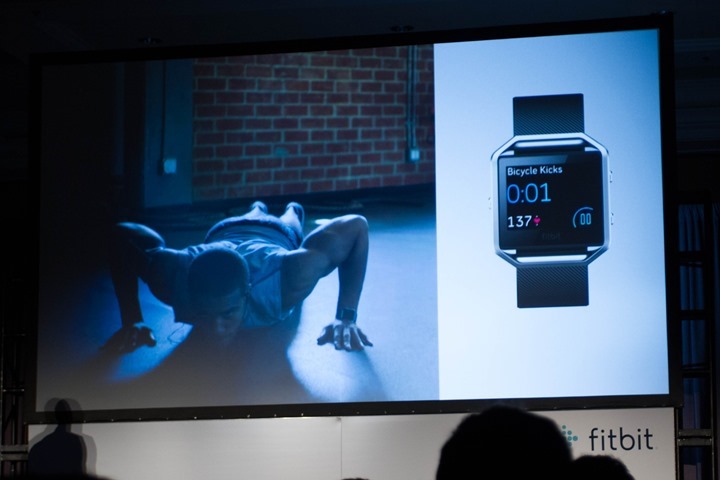 Lastly, there’s a pretty big focus on the modular bands.  These come in three main categories:

(The bands come in a variety of sizes)

Here’s a handy-dandy picture of them all from Fitbit:

The list price of the Blaze is $199 (inclusive of one of the classic bands colors/sizes of your choice), which is at the upper edge of a smart watch without GPS’s price range.  That could be a tough price for them, especially with a planned launch date of March 2016*.  Especially since one could look at offerings like the Pebble lineup, or the Garmin Vivoactive and get pretty vast functionality already.  Not to mention the Apple Watch dipped to $250 during the holidays with some retailers, and that’s before the new Apple Watch comes out in March (driving the existing prices down for the 1st generation units as Apple typically does).

*Minor note: During the press event they verbally said ‘May 2016’, however the press materials state ‘March 2016’.  Upon clarification after the event, they’re confirming it’s indeed ‘March 2016’.

Finally, when it comes to hands-on time, there wasn’t much of that.  Yes, I suppose technically I got hands-on with the unit, but only on a technicality: 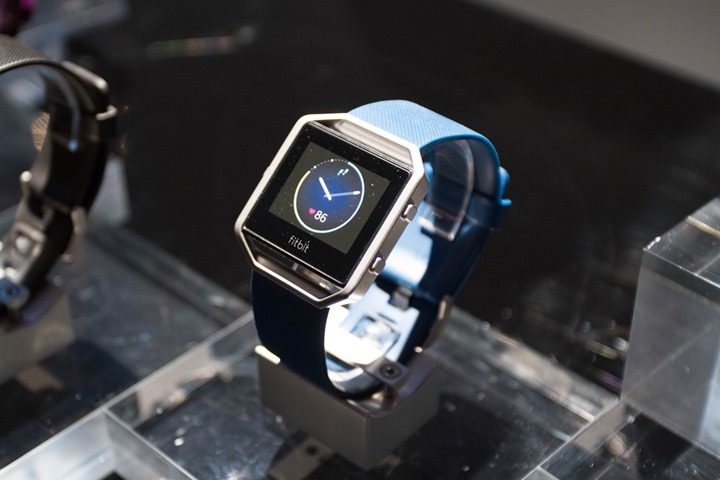 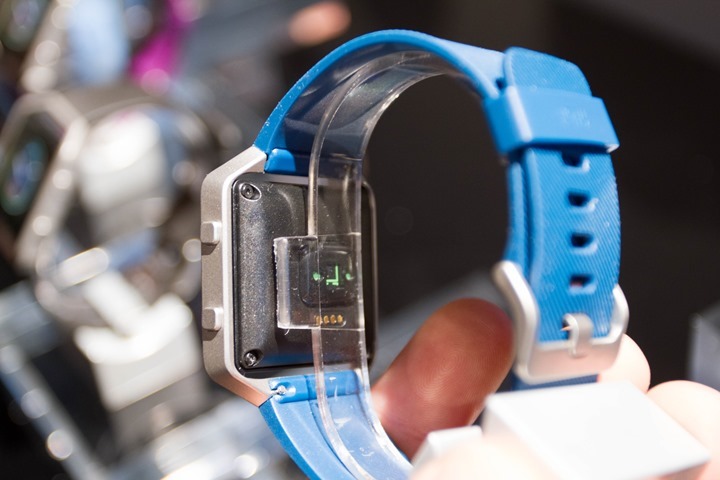 All units at the invite-only press event all had the screen locked (looks like Fitbit is learning from Apple’s Watch events), and the optical HR sensors were disabled.  There were however Fitbit employees wearing them around, which bodes slightly more positive on where the device stands in terms of readiness.  But it’s otherwise impossible to tell at this point how close they really are to production.

Still, definitely an interesting entrant and looking forward to seeing how quickly the company can mature the product and how they can build upon the workout integration piece, which I suspect will be one of the major differentiating points

Finally – here’s a quick hands on-video I shot the next day:

Update! You can now pre-order the Fitbit Blaze through either Amazon or Clever Training – both support the site! If you order through Clever Training, you’ll also save 10% on your order and get free US shipping, simply use DCR Reader coupon code DCR10BTF.