While many of you read my Alpe d’Huez triathlon race report yesterday, here’s what the rest of the weekend entailed.  And, because I was on vacation – I’m using the term ‘weekend’ with a little more flexibility…so it’s more like the ‘last 4 days’.  Thus, a proper French long weekend.

1) Hiked up past some cows, on the way to high alpine lakes

With the triathlon over on Thursday (yup, mid-week), it was time to enjoy a few days up at Alpe d’Huez on the mountain.  During the winter, the area is a bustling ski resort (one my brother and I visited last year…inclusive of the epic ski video he put together), but in the summer it’s a bit more sleepy.  There’s a bit of mountain biking you can do and some hiking – but otherwise it’s pretty quiet.

On Friday we decided to head up for our first hike, towards some lakes we saw on our just-purchased map.  Along the way, we found cows: 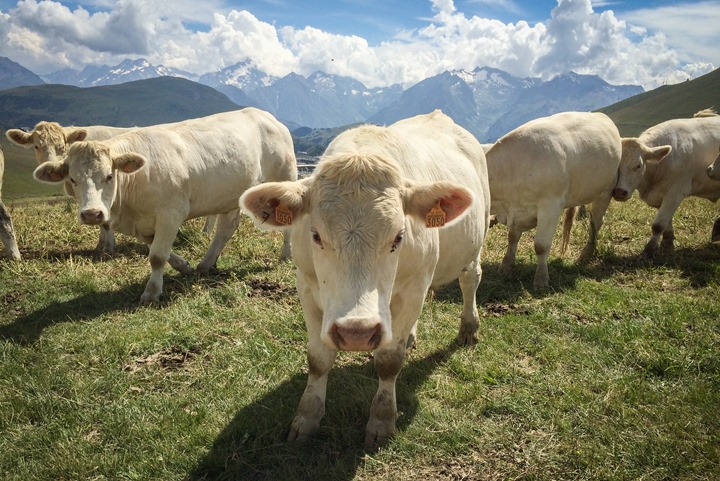 The herd of a few hundred cows wandered freely across one entire half of the ski area. 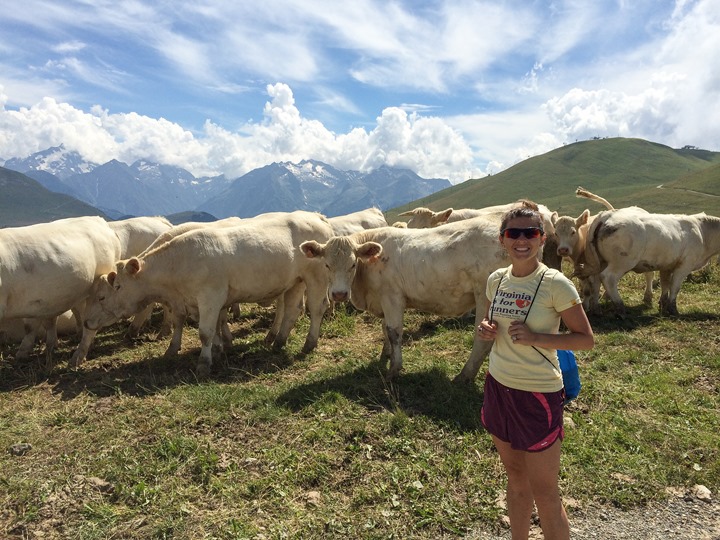 A bit later in the hike we came across a 850m long sand track for horses.  There appeared to be some sort of horse school (unsure if it was schooling the riders or the horses) in the middle of the ski area a bit lower down. 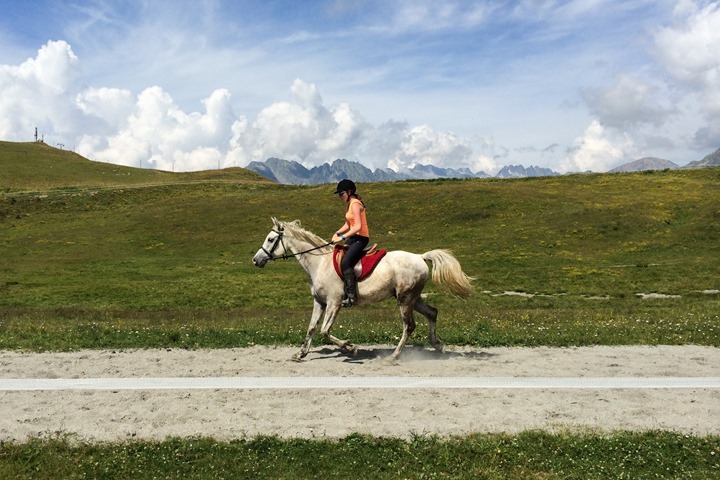 After leaving animals behind we worked our way up further, crossing a few streams along the way: 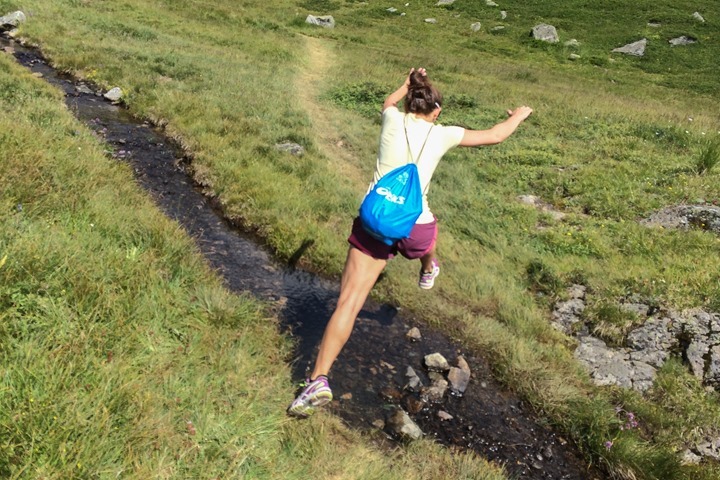 We’d ultimately end up circling around a few different alpine lakes, one more easily accessible, and one a bit further out.

The view from up there was pretty awesome.  And we had perfect weather for it too.

We ended up sitting at the edge of the water for a while watching the tiny fish feed on flies and mosquitos (carefully captured and offered to them as desserts…by The Girl). 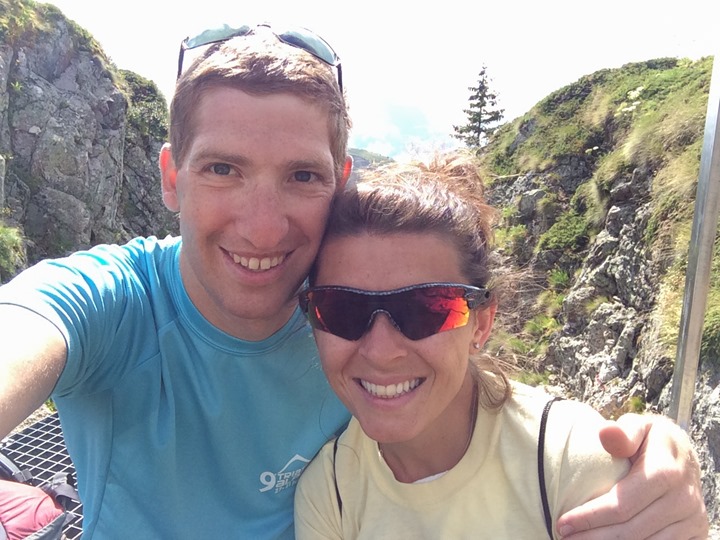 All in the hike was about 4ish hours, though I neglected to start the GPS until a little ways into the hike.

Afterwards we stopped by the grocery store in town and I noticed a few things I hadn’t seen before.  First, was wine in juice boxes: 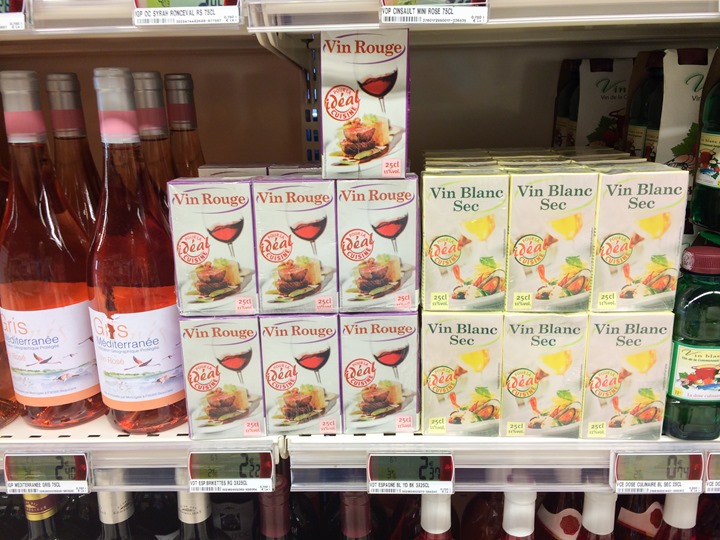 This was labeled as for cooking (cuisine), but I suppose there’d be no technical issue in tossing it in a lunchbox.  It says ‘ideal’ for cooking, but it doesn’t mean you have to limit it to just cooking.

Alternatively, you could upgrade to self-contained wine in a glass: 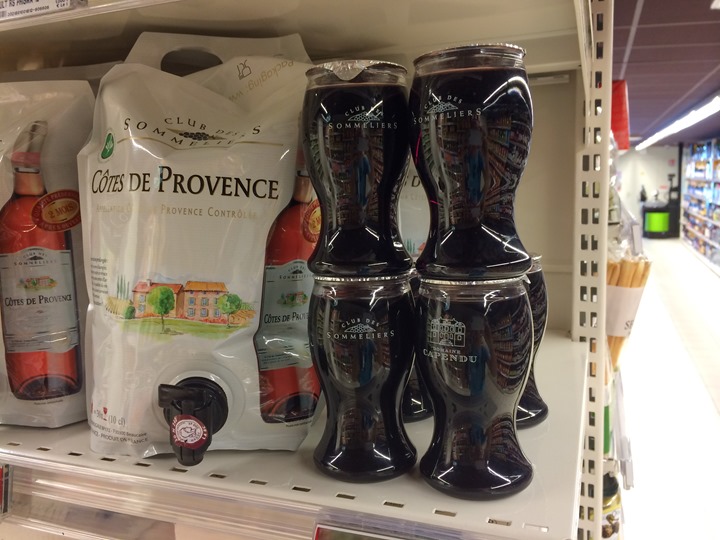 Yup, like the single-serve yogurts of the wine world.

2) Decided to hike again, this time up a rock bowl

One of the greatest things about being married to The Girl is that she’s super active.  It’s awesome that we can simply wake up and decide to randomly pick a hiking route that gains thousands of feet of elevation in a short period of time on a thin little rocky trail up a barren alpine mountain.

So we did just that.  This time we picked a far less traveled path up the mountain.  Our goal was simply to go to the base of the upper tram (aka the top of the lower gondola), and then take the peak tram to the very tippy top to check out the view.

That essentially involved navigating up to the top of what you see below, well beyond the little cabin. 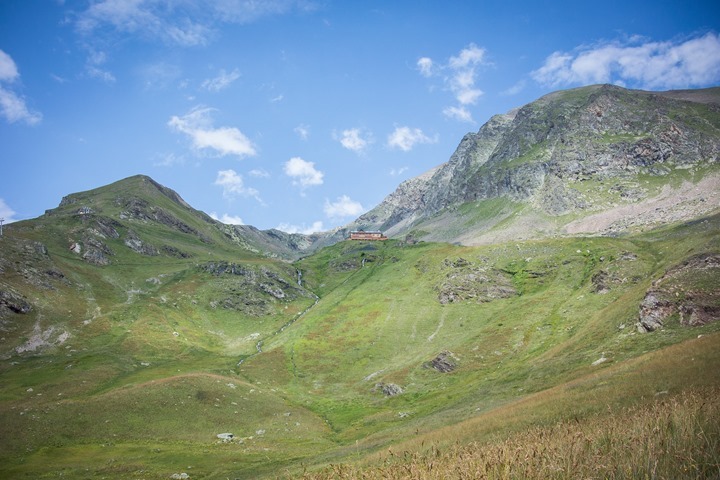 With being a less traveled path, we only saw a few hikers, though we were always within view of the village should we have had to get back quickly.

Still, this route looked much more barren once you got beyond the cabin seen above:

And quite a bit steeper, which led to a few moments like this: 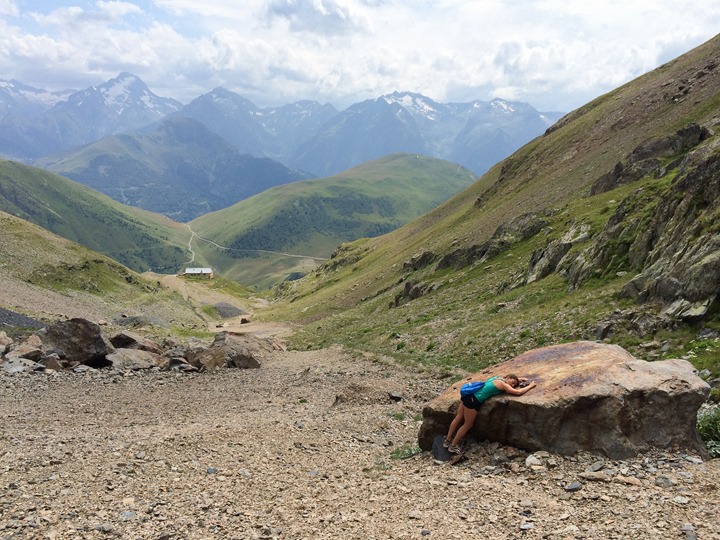 The elevation profile was fairly unrelenting, though thankfully we were mostly out of the sun – within the soaring rock walls on either side of us. 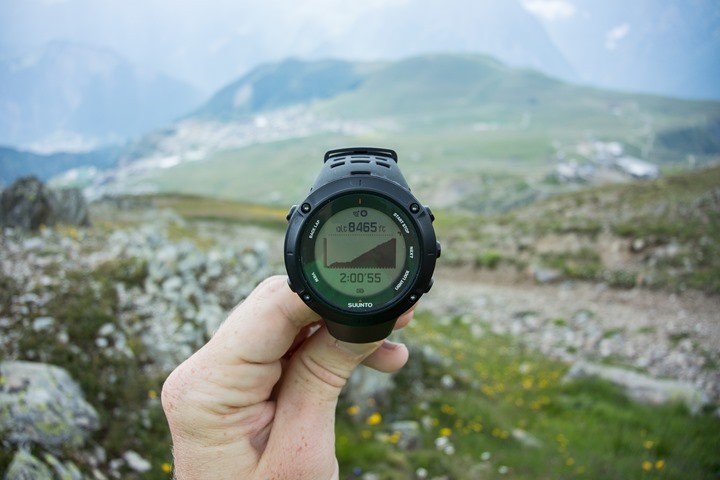 We only had one minor snag…this: 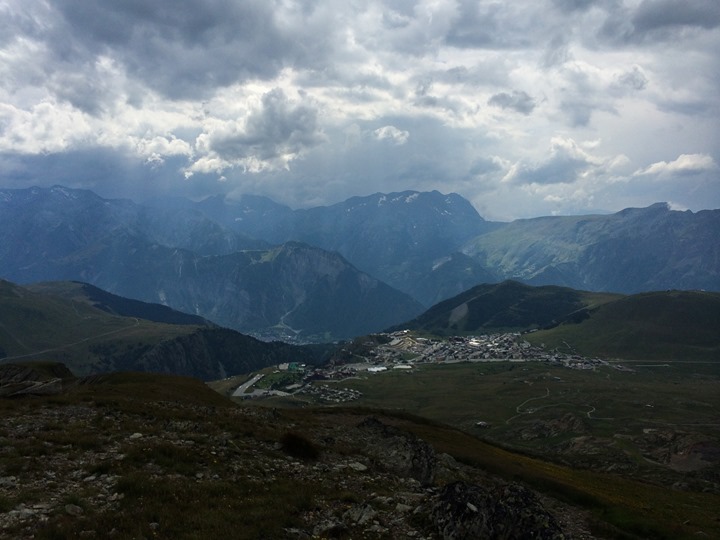 Actually, it looked a lot darker than that.   As we approached about the 75% marker we could see just how quickly the storm was moving in.  In our case it wasn’t so much worrying about being in danger, but rather just not wanting to get drenched.  I’m reasonably certain I would have been less soaked going for a swim than being out in the ensuing rain storm.

So we ran…rather fast.  Albeit making one 50y detour to get a snowball: 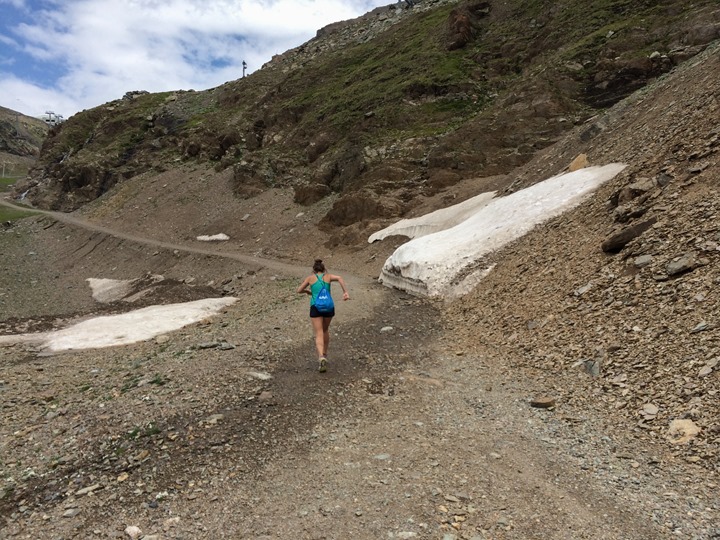 Then it was back to running for the top of the chairlift (see upper right in the below photo): 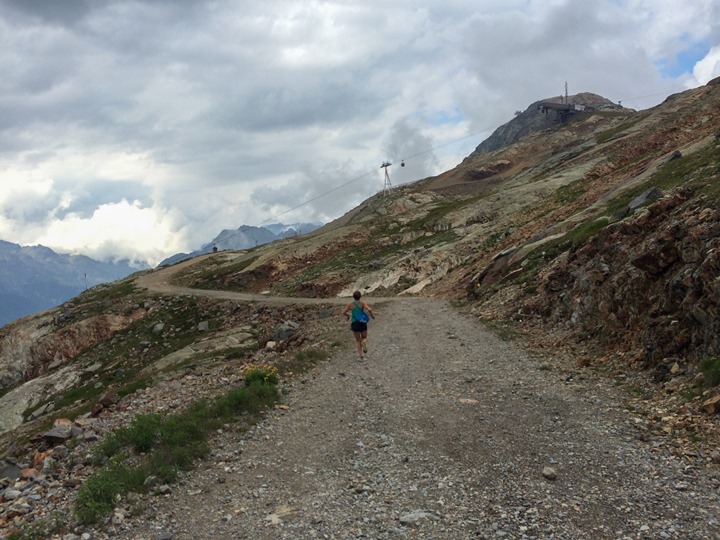 The good news is that we just barely made it to the gondola when it started raining…pouring…dumping…everything. 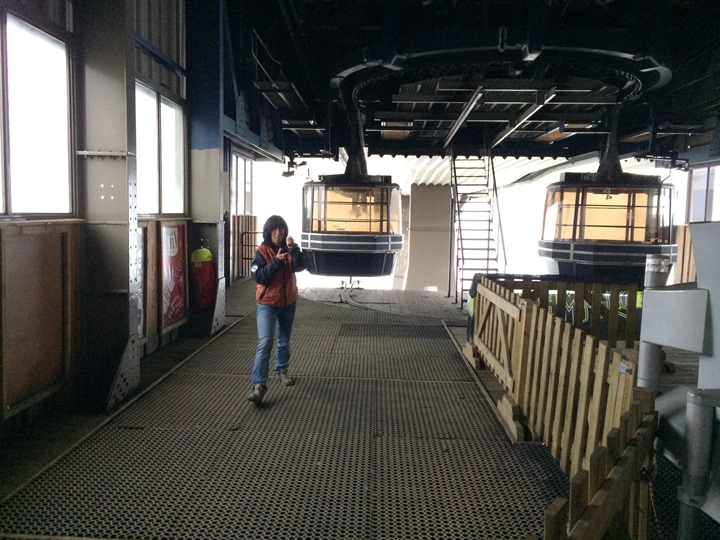 The bad news?  The wind then picked up and said gondola had to be shut down.  So we, and a bunch of other people that were up there, got to hang out inside the building for about an hour, before getting a free scenic off-road truck ride back down to town.  Ironically, by time we headed back down the rain had passed and the sun was out. 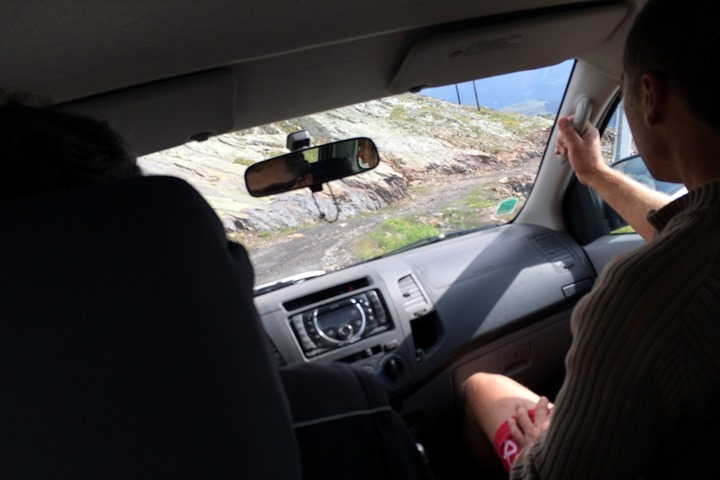 We probably would have just hiked back down, since it only took us about 2 hours to get up there, but we had planned to take the tram back down so we could get on the road and onto our next destination.

3) Did some shopping at a giant store

It’s funny, we rarely rent a regular car in France (not counting our little Paris-only car-sharing thing).  But when we do, we really try and get our money’s worth.  It’s usually when we take a road trip around France – such as to Saint Malo, or the West Coast, or the Pyrenees.

In most cases we get a mini-van, simply because we usually have bikes with us.  But that doubles in allowing us to pickup supplies for either the CupCakery or just for home.  Moreover though, the stores outside of Paris proper are just so much darn bigger than those in central Paris.  Our grocery store is the size of most gas stations in the US (actually, a bit smaller).  Most of the bigger grocery stores are really out on the fringes of Paris, a solid 20-25 minute drive for us.

So while passing through Grenoble on the way back home we stopped into the giant E.Leclerc, which is like combining a huge grocery store with a Target.  I guess kinda like one of those super-Walmarts, except with an entire aisle dedicated to French cheeses.

In any case, we got lots of mostly household things there, but also things for the shop.  Specifically, the little coffee capsules we use for people who want coffee with their cupcakes.  The major grocery stores are actually the cheapest place to buy them (cheaper than the restaurant supply stores).  So, we buy a lot of them.  But since the bike was already in the back of the van we had to get a bit creative: 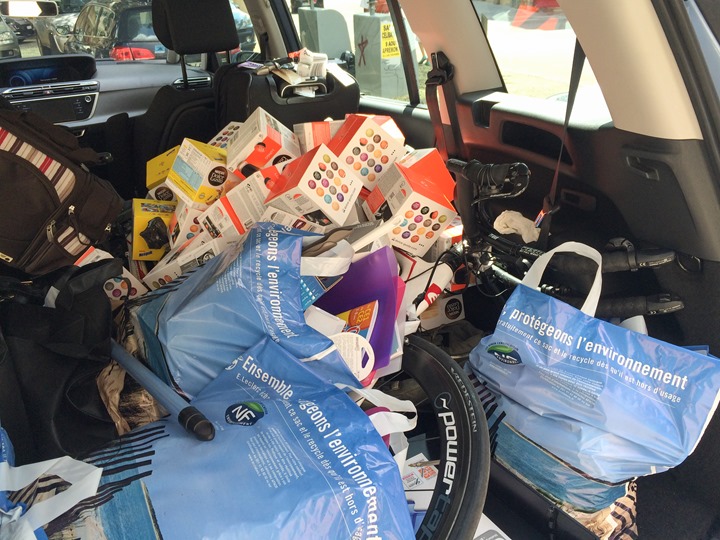 Fear not, the boxes weigh practically nothing – less than a t-shirt would per box and I was careful to avoid the chain/derailleurs.  And, this was pretty much the best option we had at 10PM (it was still open then!) without re-packing the entire car before driving another 2-3 hours to our hotel.  Yes, that’s how we roll.

4) Checked out Dijon (the city, not the mustard)

After our shopping adventure we trekked up further north in the general direction of Paris, stopping in Dijon for the evening.  Because the next morning was a Sunday, virtually nothing was open (normal) – especially combined with being August in France.  Like a double-whammy.

The good news though is that this small crepe place was open, which had incredible crepes.  Below, mine included crispy lardon and ham, eggs, Roquefort, caramelized onions, and crème fresh.  Without question the best crepe I’ve had in France. 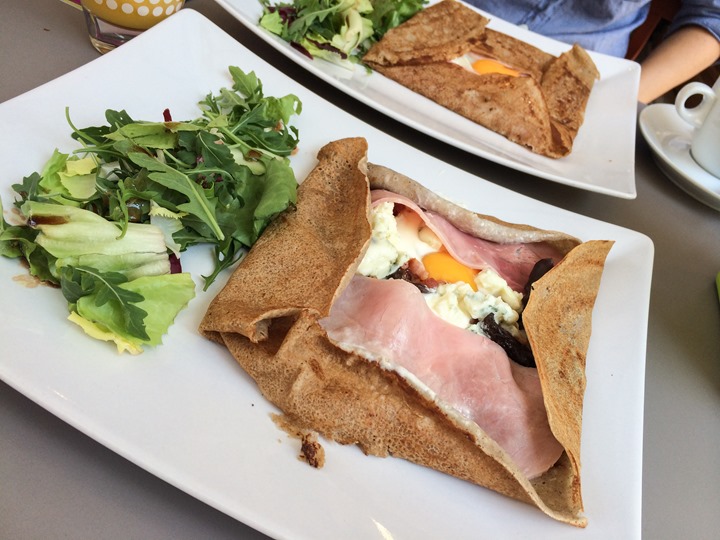 We then followed that up with a dessert crepe (you can’t have just one type, right?).  In case you’re wondering that’s blackcurrant ice cream on top with caramel and then a spiced bread of sorts. 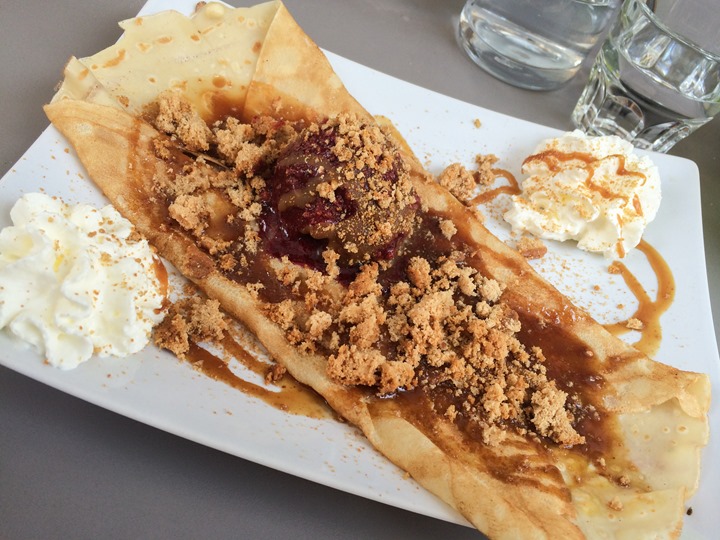 With our dining complete we figured we’d head over to the local summer beach.  Which is similar to the Parisian ones, just on the lake instead. 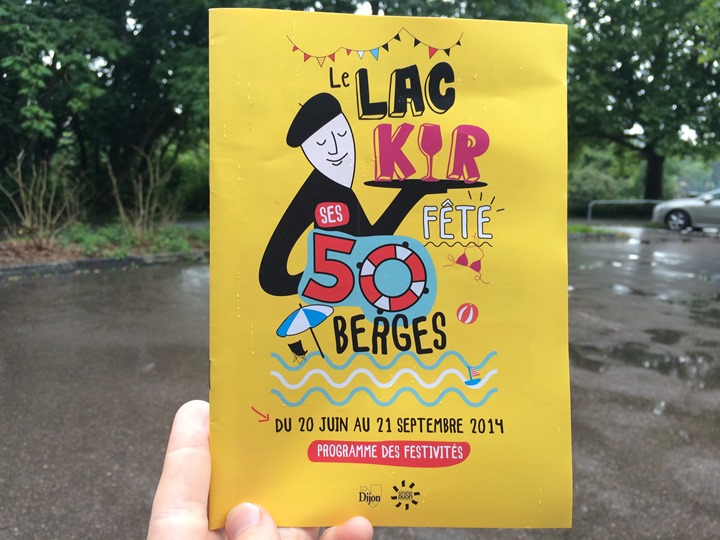 The only problem, as you might discern from the below photo, was the incoming thunder storm in the background. 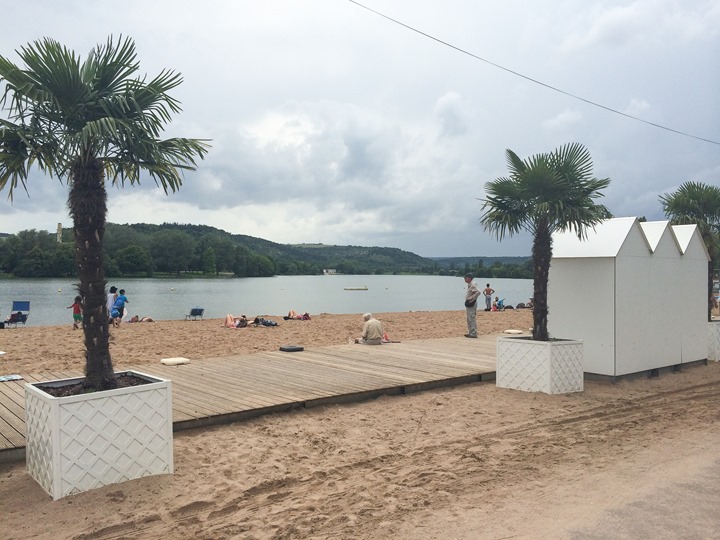 Which meant that about 25 minutes later…we looked like this: 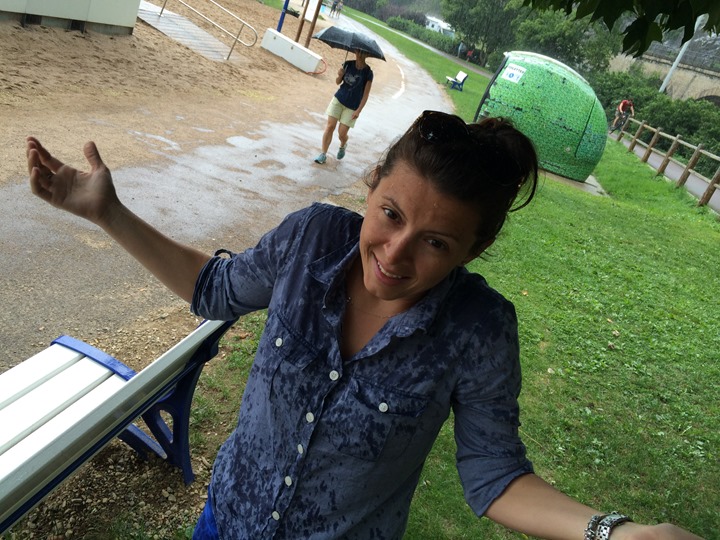 Actually, by time we got all the way back to the car, we were completely drenched.  Oh well, win some, lose some…

We got home around 10PM that night from Dijon, but The Girl and I had lots of work to do to prepare for the week ahead.  With me travelling and her returning back to the shop after a few days away we worked well into the night ensuring things were good to go for the week ahead.  This is one of the busiest times of the year for us at the shop – both in terms of walk-in visitors but also numerous wedding cakes, and other special projects we have going on.  I think the clock said about 4-5AM by time we were finished.  Fear not, that gave me three hours of sleep before heading back out again to the airport (and her to go bake). 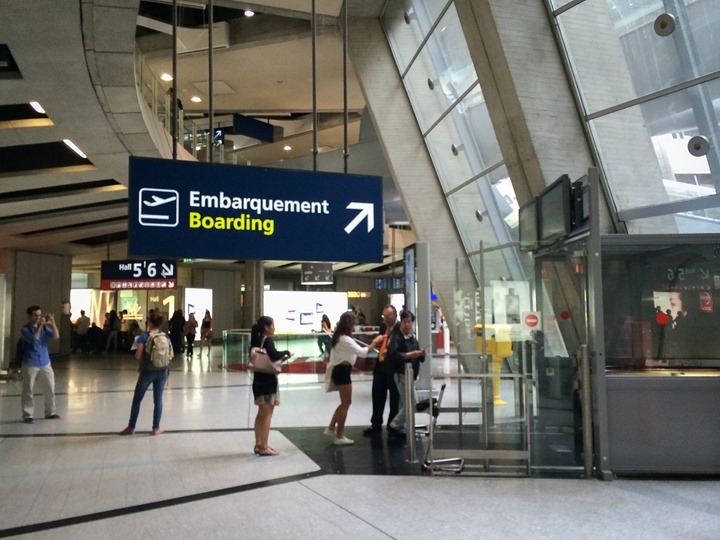 From there I droned across the Atlantic and Canada to Chicago, where I connected down to Atlanta. 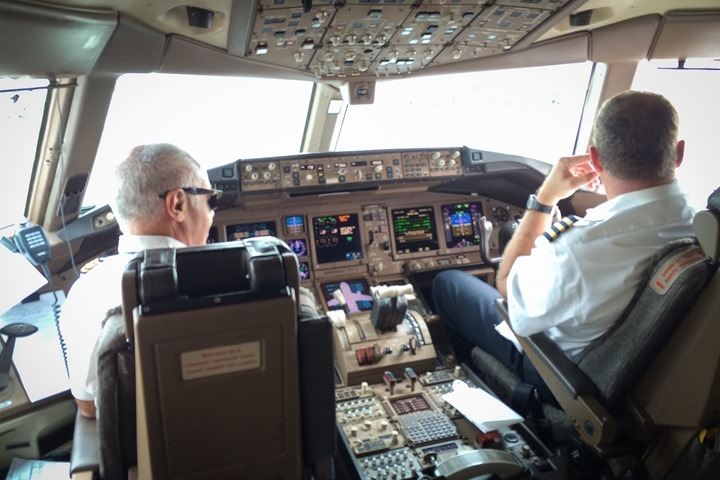 I’ll be here for Tuesday before catching an early evening flight over to Salt Lake City for Outdoor Retailer.  Fun week of stuff coming up ahead!