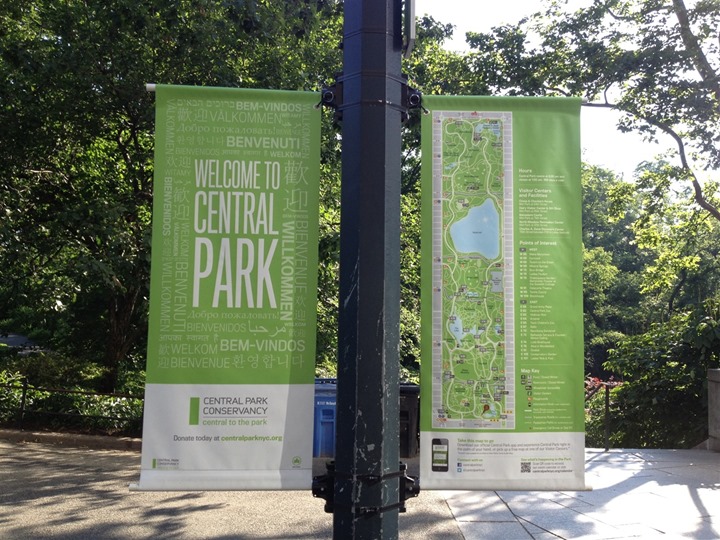 I flew out to New York late Tuesday night, only in town for a little under 48 hours – just enough for a full slate of work meetings.

I ended up swimming on Wednesday at a place just a few blocks away (though underground some four floors), but Thursday morning I had a bike-run brick on my calendar.  The longer segment of which was the run portion.

Since my brick workout started off with a bike segment, I headed down to the gym at about 6:25AM.  I was actually pretty surprised at how busy it was in there. 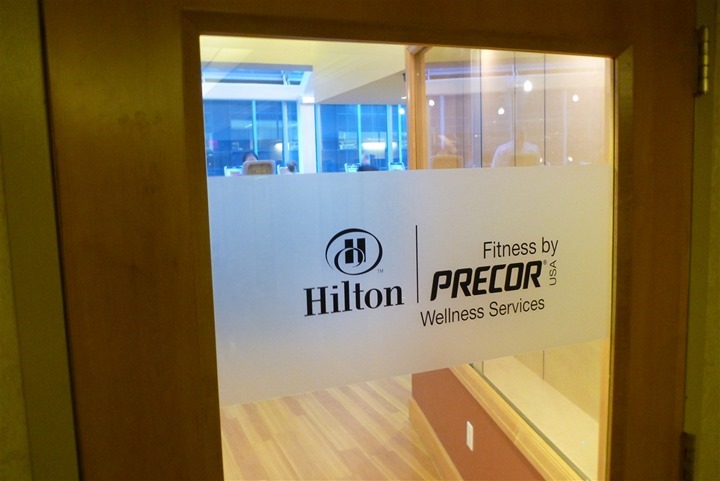 At first glance I didn’t see any of the bikes available.  There wasn’t many in the gym, compared to a seemingly infinite amount of treadmills.  However, off at the very end I spotted a bike that was a bit more involved looking than the others. 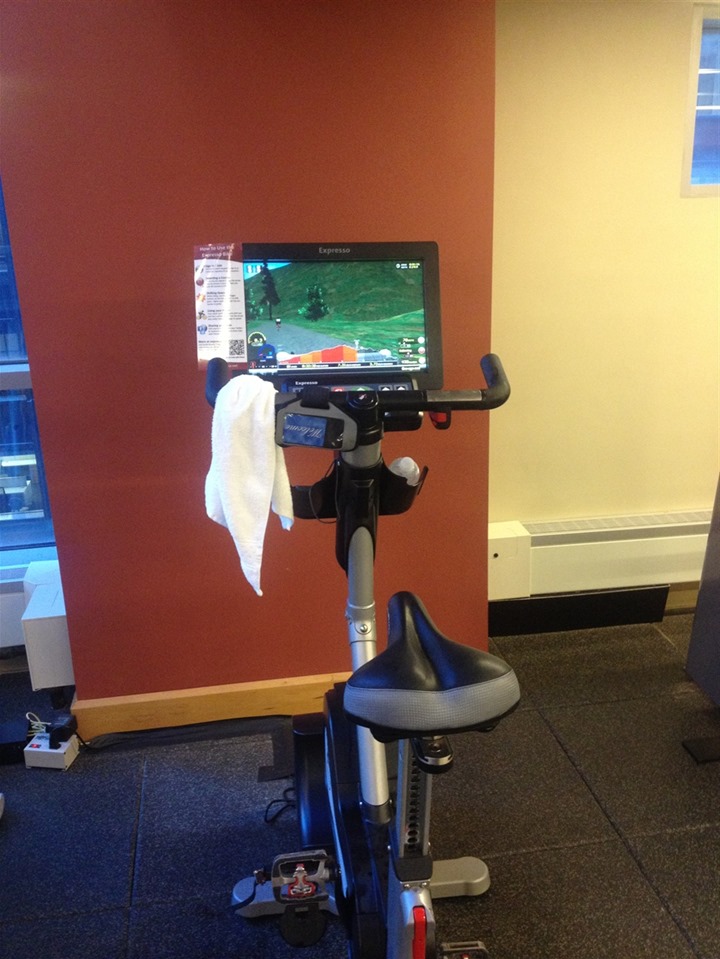 After poking at it though, it wasn’t too bad at all.  Sometimes the fancier the exercise bikes, the worse they are – but in this case, it was actually fairly functional.

In fact, it gave me everything from wattage (that seemed valid), to cadence and heart rate.  Even more interestingly, I was actually able to ‘shift’ gears.  No, not just change resistance, but literally on the handlebars there were shifters.  Oh, and I could even steer the bike. I guess it was sorta like the Tour de France trainer bikes you’ll see on TV starting in another week, except without the guy wearing the helmet indoors. 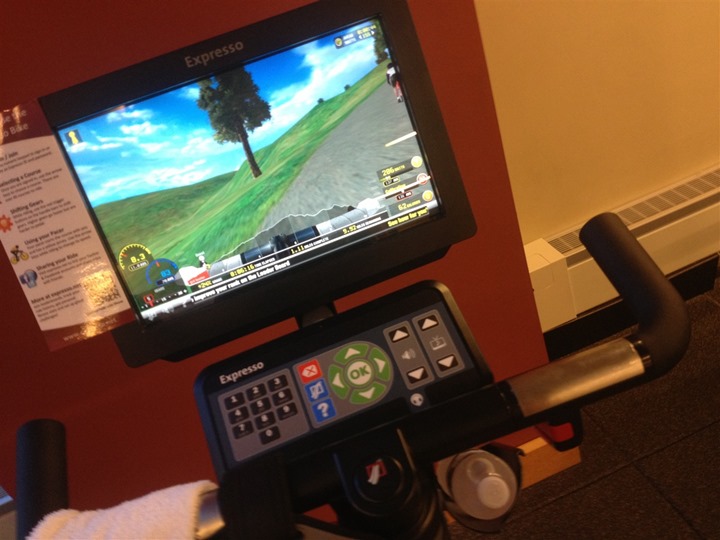 Had I had more time I would have probably configured a free account so I could have downloaded my workout.  But for the only 30-minute pre-run bike segment, it didn’t seem worth it. 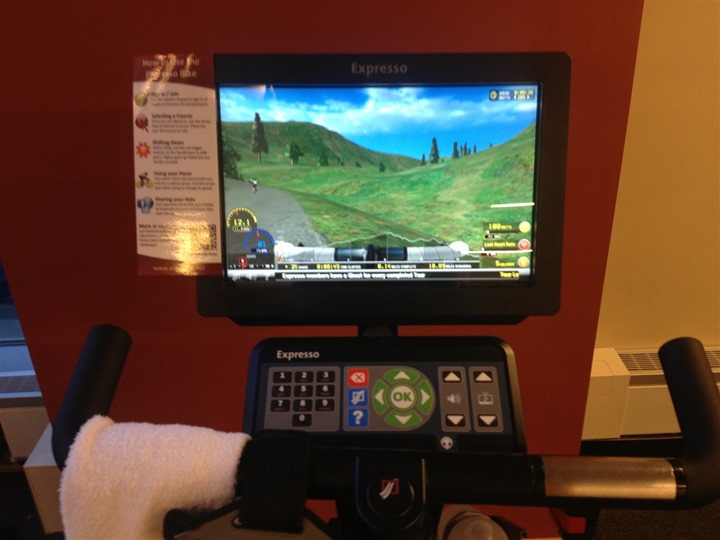 The bike portion of the workout effectively just built in intensity, and before I knew it I was headed back out of the gym and outside.

The hotel I was staying at was only a couple of blocks from Central Park – and one of the main reasons I stay there.  Super-easy access to and from the park for running.  Ironically, as I was standing outside the hotel waiting for satellite reception, a reader came up and asked if I was ‘DCRainmaker’.  Yup, guilty as charged. 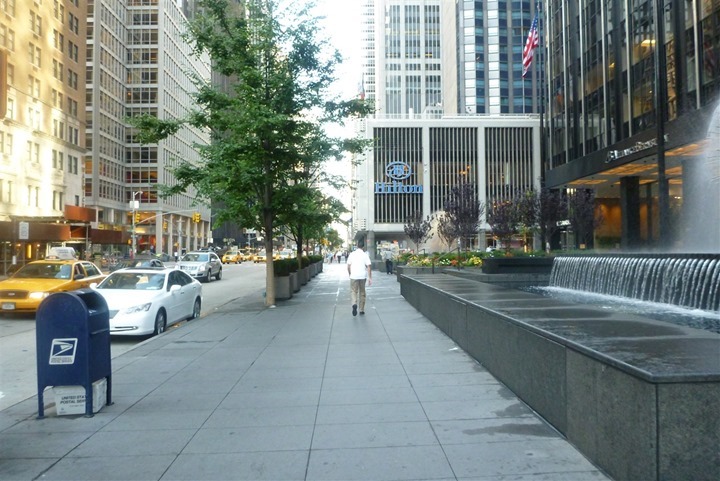 With that, I headed on out to start my run, 3-4 blocks later I was entering Central Park: 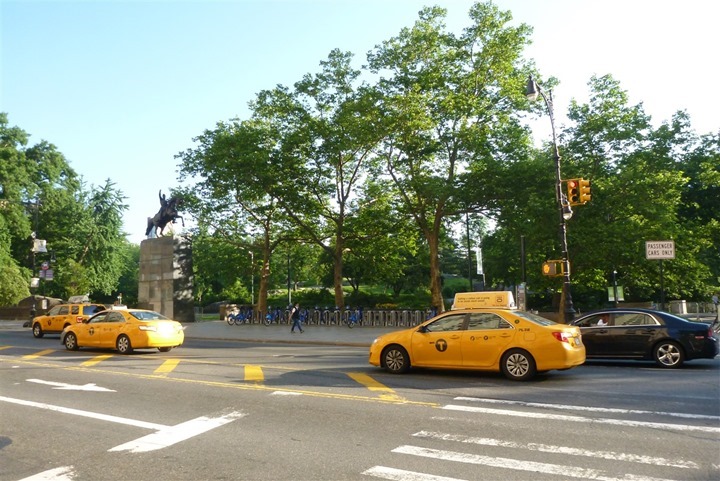 Immediately upon crossing the street I came upon my first Citibike station of the run.  It was actually about mid-way through the hotel exercise bike workout that I realized it would have been WAY more fun to simply rent a Citibike for the bike portion of my brick.  While certainly not a fancy bike, I probably could have gotten pretty much the same workout on it within the park – and have been way more fun. 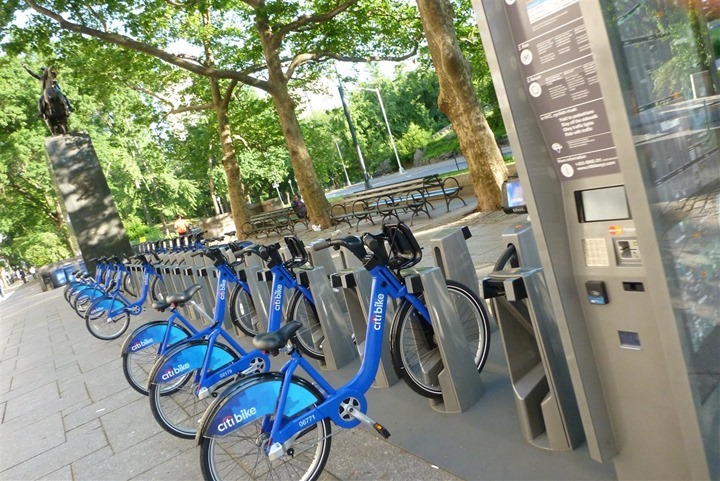 Much of the park is closed to drivers, though this time of day did allow drivers through some small sections.  But I didn’t see many cars taking advantage of it (could count them on one hand).  And nothing that seemed to impede any cyclists this morning. 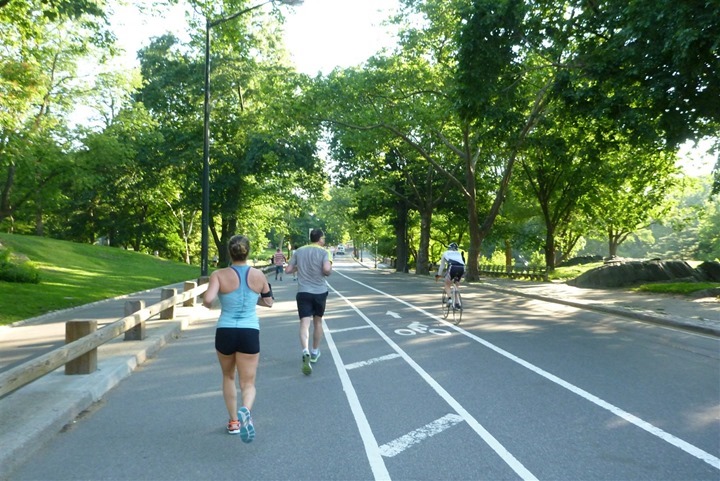 The first 5 minutes of my run was just a build to intensity.  It somewhat short, but serves merely as an introduction to things.  I ran in the same direction as cyclists, and most runners (runners can run either direction).  As usual, there were plenty of people around, and of a wide range of running abilities.

What you don’t necessarily expect however is a group of soldiers marching through on some form of morning PT workout.  This was fairly common to see when I lived in Washington DC, but I hadn’t expected it in NYC. 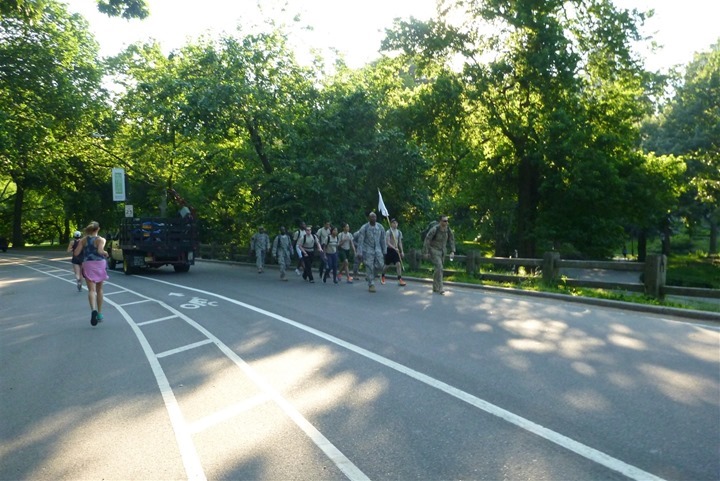 I was soon beginning my first interval.  Each interval started off with a 7-minute long portion at about a 10K race-pace before shifting in intensity (harder) for 2.5 minutes to about a 5K race pace. 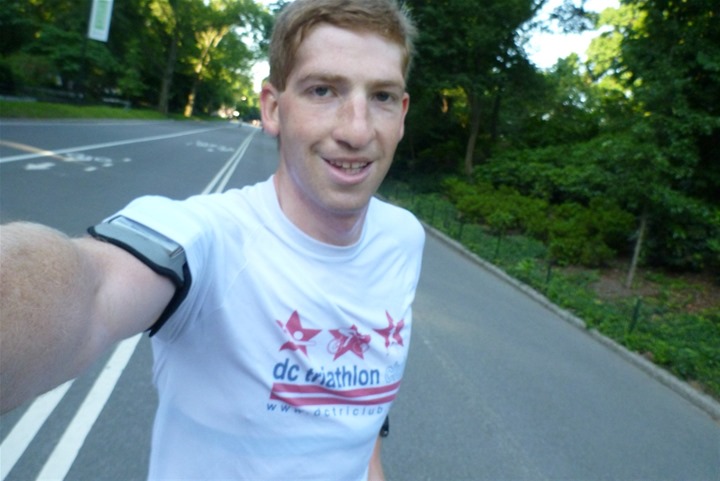 Once that higher intensity section was complete, it was 2.5 minutes of recovery before it began again.

It’s always fun to hear the sound of the aerowheels as they whamp-whamp-whamp from behind you and cruise by.  Plenty of triathletes out this morning.  And, plenty of roadies out as well. 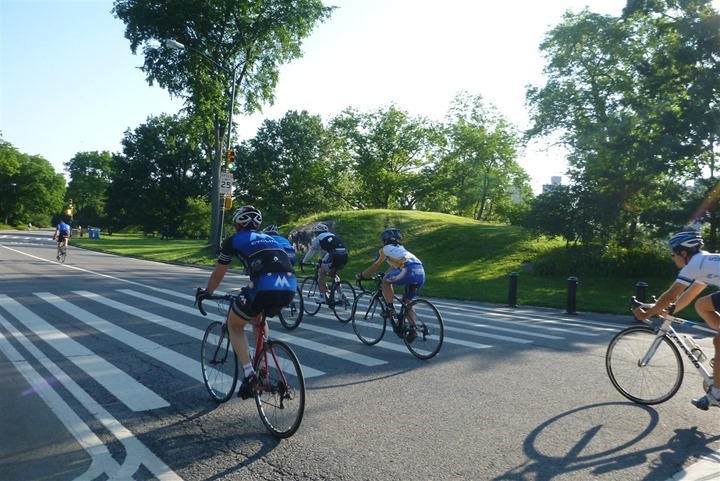 As I made my way down the first major hill of the morning, I saw one of the city pools off to my right.  Somewhat surprisingly it was empty.  I figured by this time of year it would have been filled. 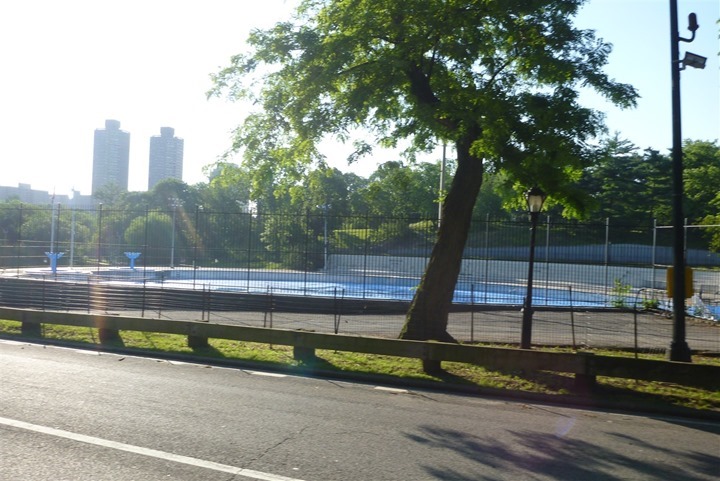 A short bit later I was re-gaining the altitude lost on one of the major ‘climbs’ of the morning.  I’m glad there was a cyclist in this photo doing a standing climb – merely because it then shows that yes, it’s a climb. 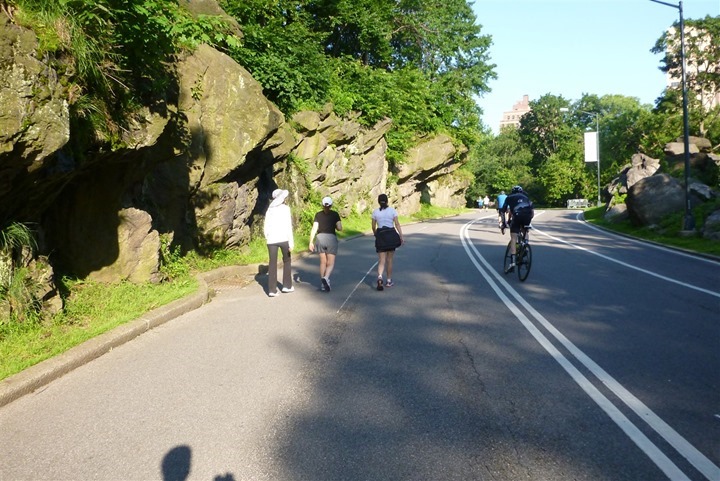 By this point I was in my second interval – though still the main 7-minute portion.  It just kinda happened that as I hit the top, I switched into the higher intensity piece.  This was only notable because then it made me look really fast for that split as I descended again.

Otherwise, I just continued my way around: 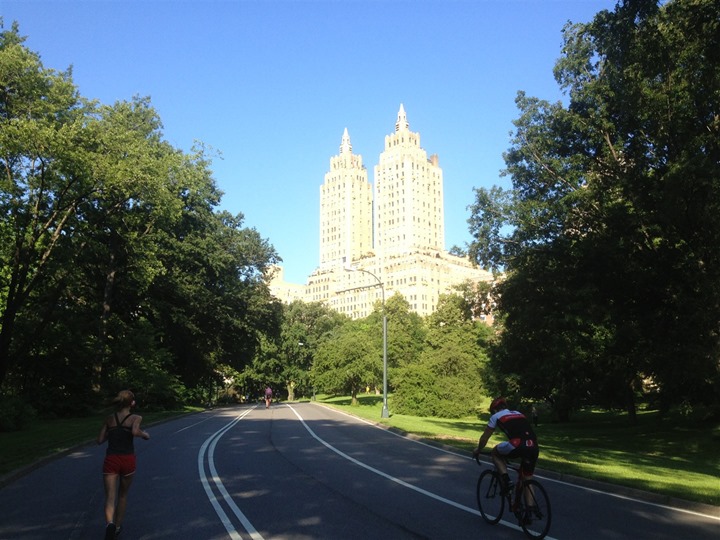 I made a last-second decision to veer off the roadway and go run around the lake/reservoir instead. 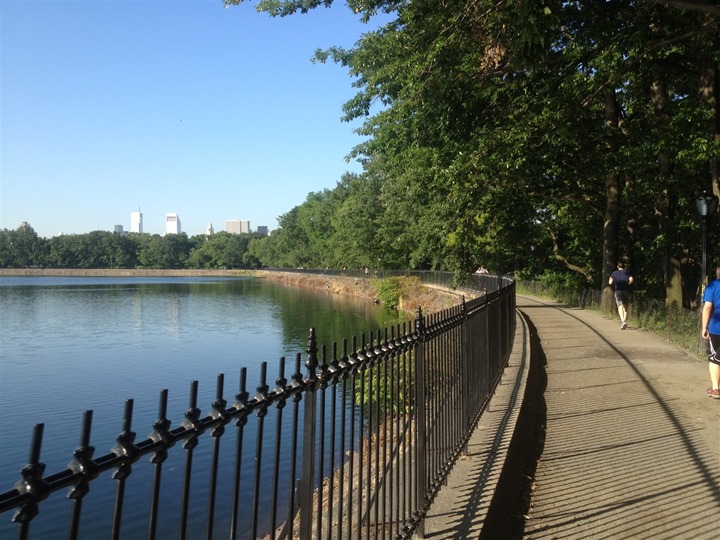 There were plenty of runners out here as well, and provided a nice (albeit somewhat brief) change of scenery. 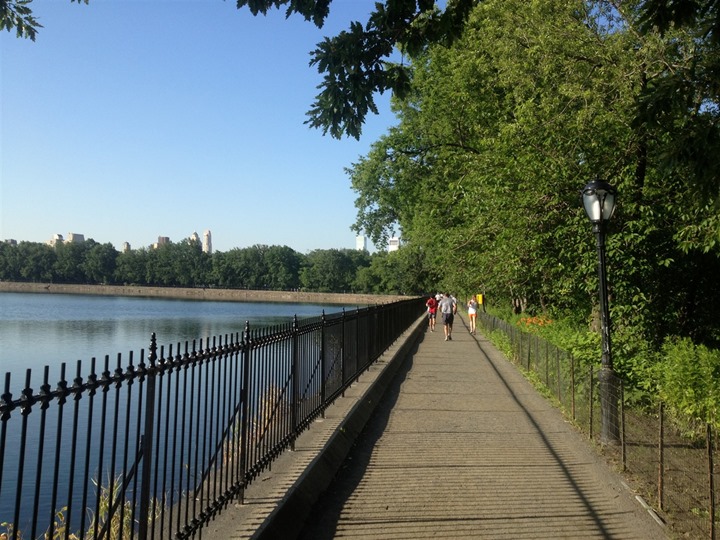 I eventually veered back to the road though, and finished up my main intervals.  In this case, it was 3xSets, but it was scheduled for 4x.  I just was running out of time before my 8:30AM meeting.  So I wrapped things up with my 4xSprints, essentially just a series of 30-second sprints at a higher intensity.

Upon the completion of each I’d move over to the walking lane, to ensure I was out of the way of other runners. 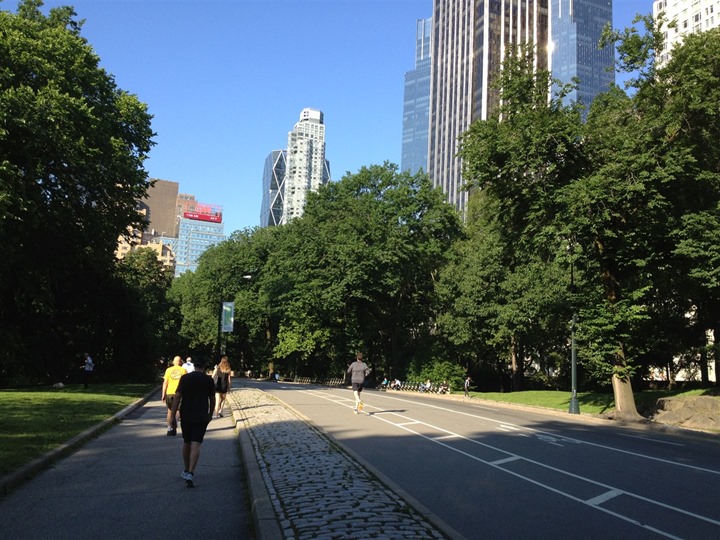 I soon found myself back at pretty much the same place I entered in.  While I did go past it a few hundred yards, the distance ended out working out pretty much perfectly. 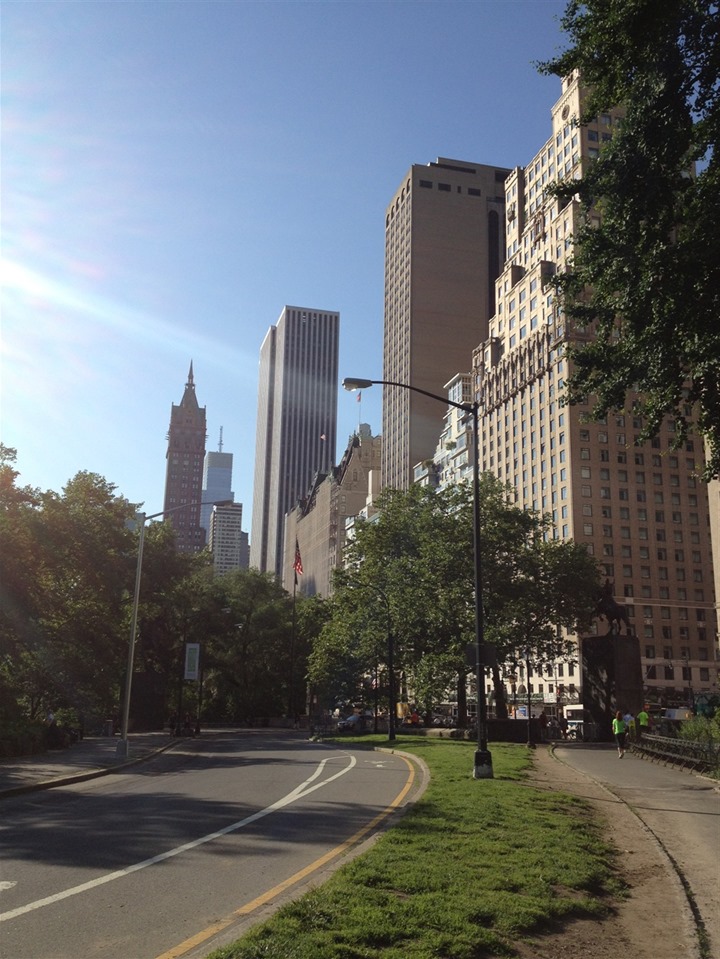 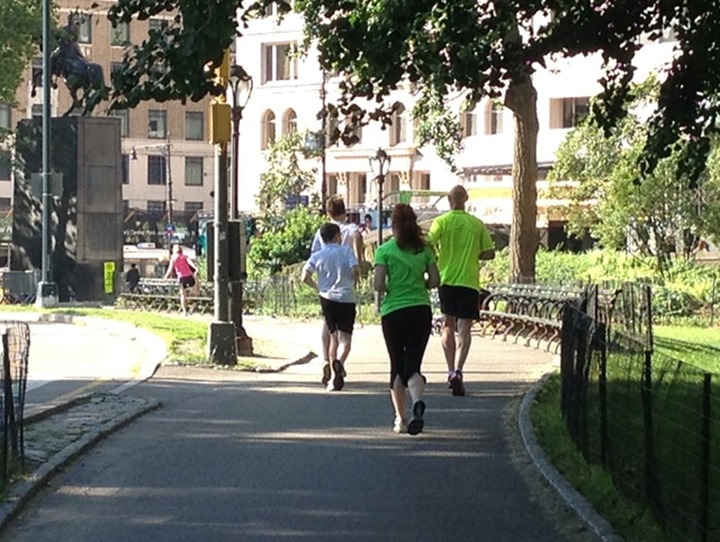 From there I was out of the park oasis and back into the morning commute rush.  Thankfully I only had to run a few more blocks back to the hotel through it all. 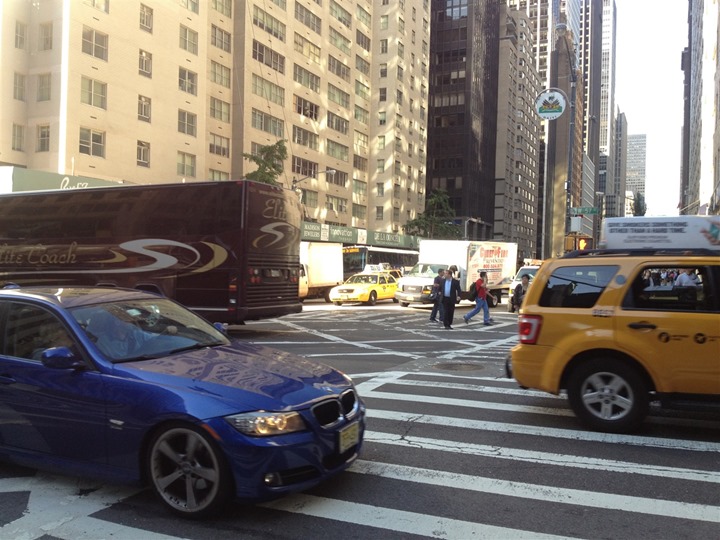 Less than 17 minutes after getting back to the hotel I was walking back across the street and into my meetings.  Pretty solid timing.

And, and of course – during my stay I did get to Katz Deli again.  How could I not? 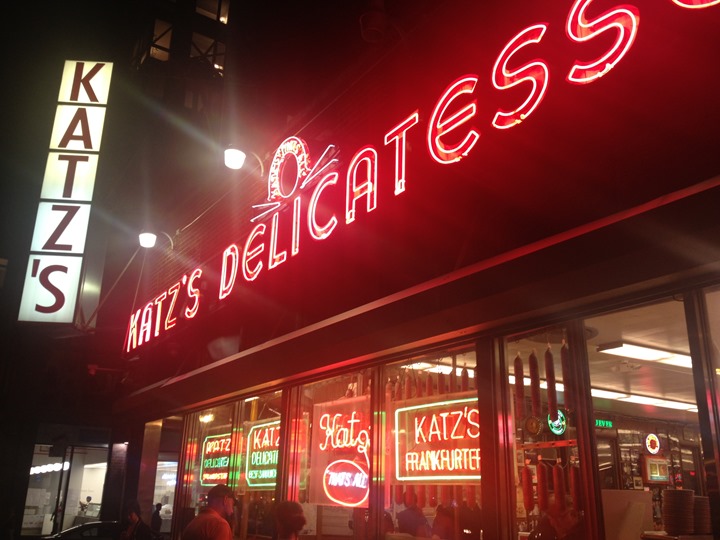 Thanks for reading – and have a great weekend!