When I heard that I’d be going to Dublin about 40 hours after arriving back from nice sunny…warm…sunny…warm…did I mention sunny…Australia, there weren’t many positive thoughts in my head.  There’s nothing wrong with Dublin – it’s just that (like my hometown of Seattle), there’s very little sun and warmth this time of year.

I had a early Monday morning flight up there, which in theory would have allowed me plenty of time to get a nice easy Z2 run in for about 40-50 minutes before my meetings started at 2PM.  In reality though, the inbound flight from Dublin was late by a bunch which in turn caused my flight to be late.  So by time I got to the hotel it was pushing closer to 12:30.

I did what was probably the fastest turnaround I’ve done in a hotel and was out the door in 2-3 minutes, ready to run.  I had even pre-placed an order for lunch with room service (since no lunch was being served in meetings).  I was pretty proud of myself for thinking ahead.

Anyway…here I am, on the street corner. 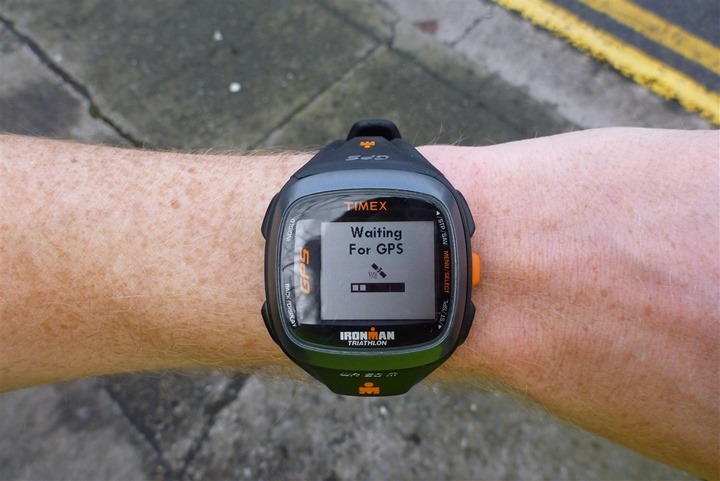 Only a few short blocks away was probably the most well maintained and sparkling building I saw during my run – the Royal Dublin Society.  Somewhere behind the stone façade are all sorts of fancy places for horses to dance around.  But they also do various other events there as well. 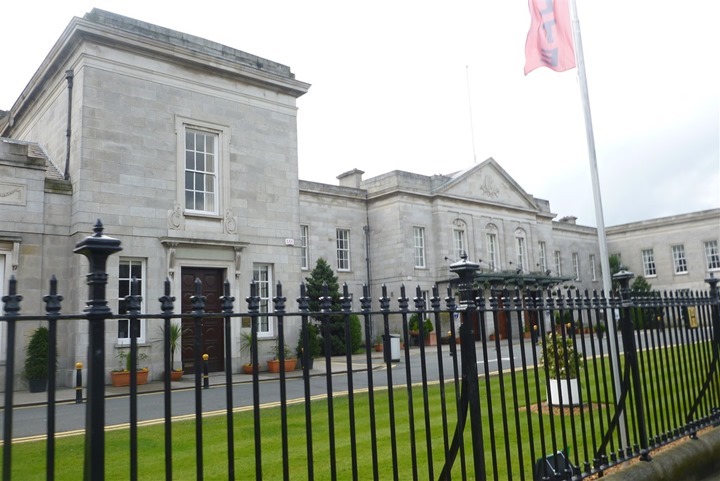 The neighborhood I was in was largely just that…a nice neighborhood.  And obviously, given I was in Dublin – there were just as many pubs as there would be Starbucks in Seattle. 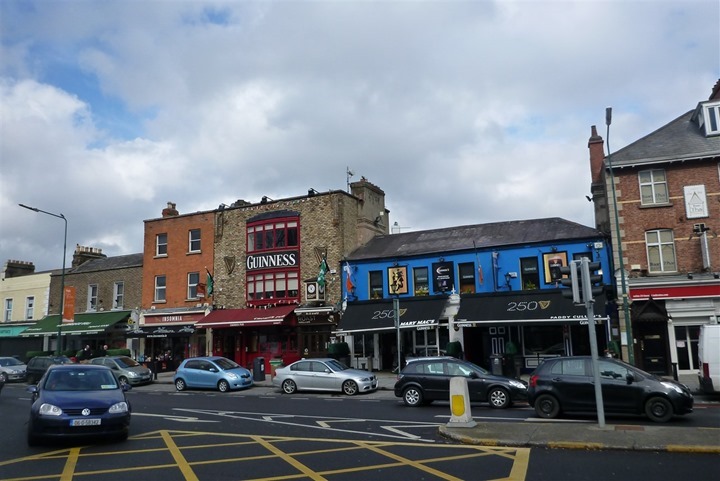 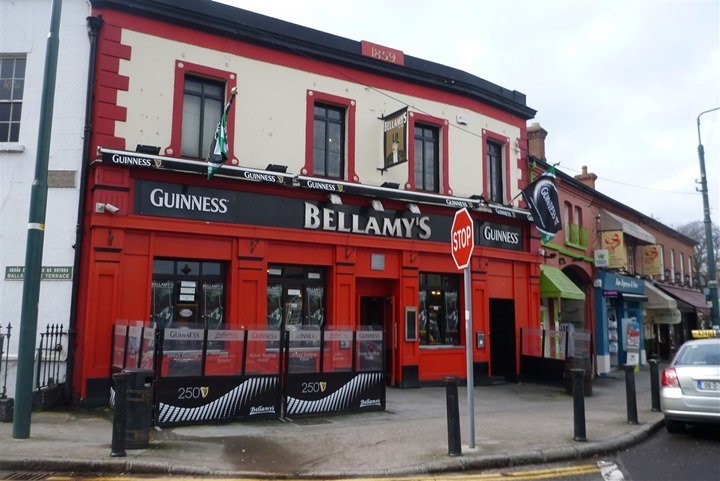 A short bit later I ran past the US Embassy.  Amazing how much smaller it is (and less fortified looking) than the one at home in Paris. 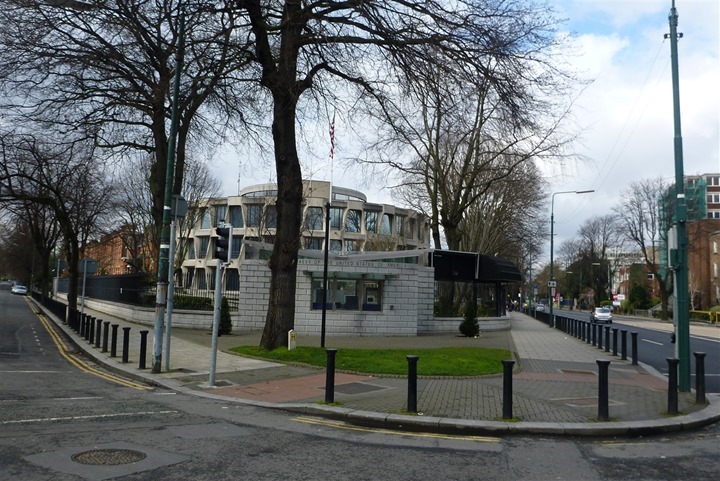 I was impressed with how many cycle tracks there were across the sections of the city I was on.  Most of the roads I seemed to be running on had dedicated bike lanes.  Interestingly, the bike lanes had different times on them.  I assume that outside of those times you’re allowed to park there (in a car).  The below section was the least restrictive, compared to others I saw that were more like HOV lanes as far as hours go (7-9AM, 4-6PM). 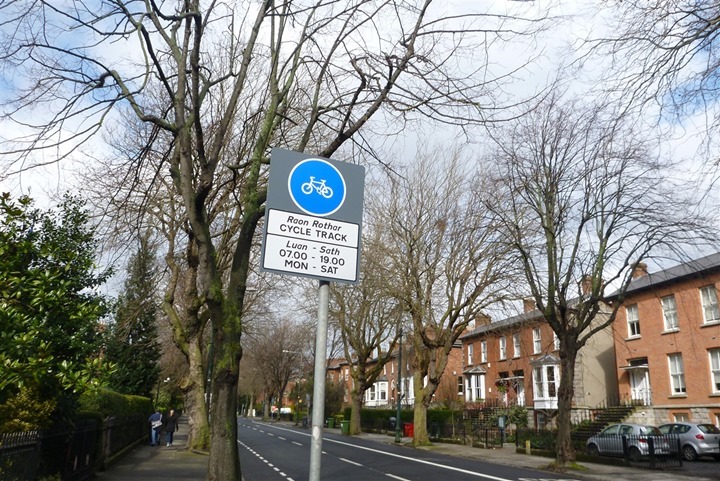 My initial goal upon landing in Dublin was to run just far enough to make it to the Guinness plant.  It would have been almost 14 years to the day since I’d been there last.  See, in high school my marching band (inclusive of me) came over to Dublin to play in the St. Patrick’s Day parade and with this being the day after St. Patrick’s Day – the timing would have been right.

But given the flight delays I was very tight on time, and just couldn’t afford to run the extra 1-2 kilometers that I believe it was from where I had to make the turnaround.  So instead, here’s a building with another beer company on the side of it. 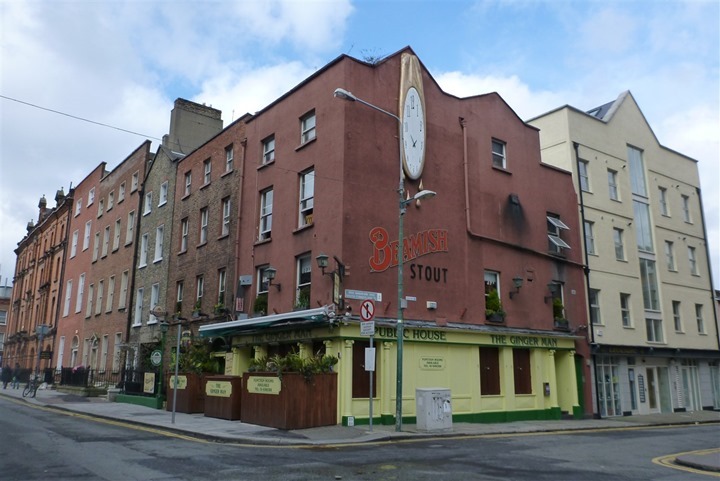 On the bright side, I did see a street carnival.  Which, would probably encapsulate the only happy people this morning in Dublin.  Everyone else was no doubt at home still nursing the hangover. 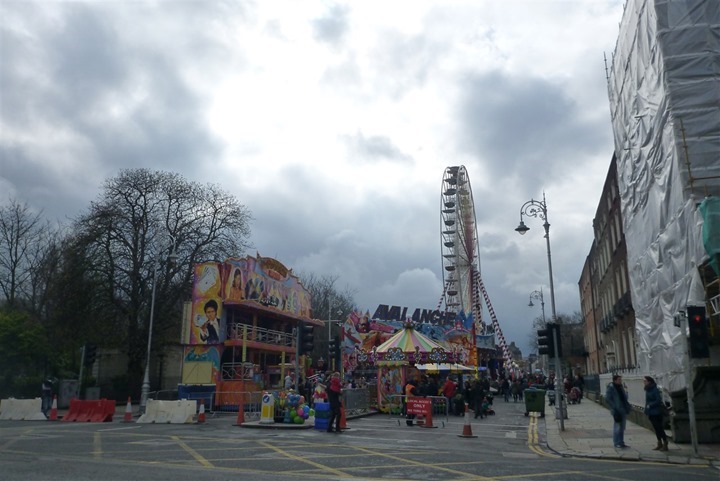 Next along the way was the famous Trinity College.  This isn’t exactly the best picture, but it’s what I’ve got.  No stopping and all. 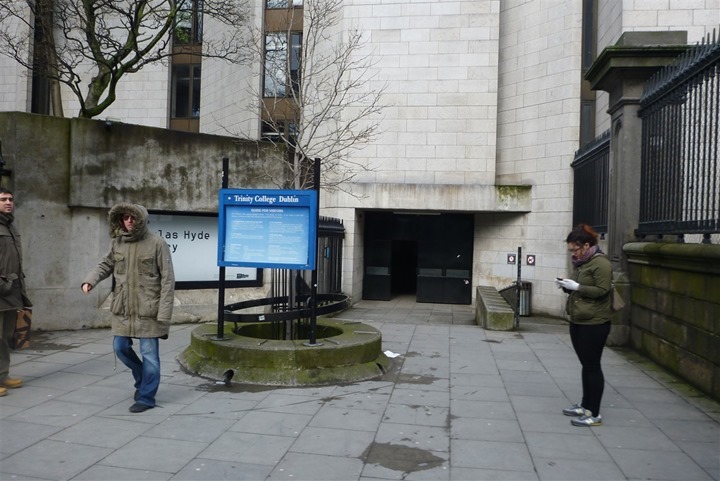 The tour and charter buses were out in full force today.  Tons of tourists still there from the weekend. 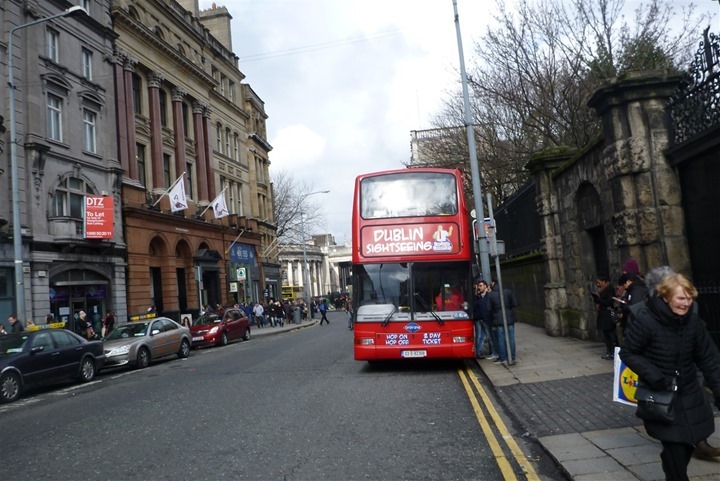 And stores like these were definitely selling plenty of goods.  The airport check-in line the next day was packed with people wearing all sorts of lucky charms type stuff. 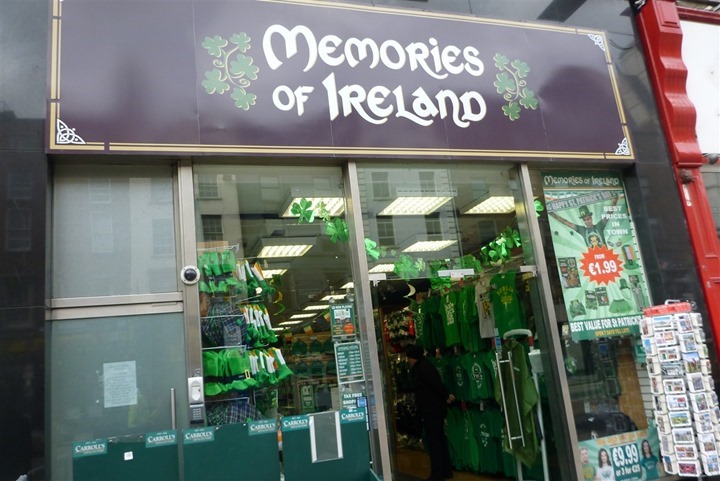 Eventually, I arrived at the river.  If I had more time, I would have continued on quite a bit longer along the river – as it was a nice place to run.  But being time-constrained, I just ran to that next bridge you see in this picture, before crossing the bridge and turning around. 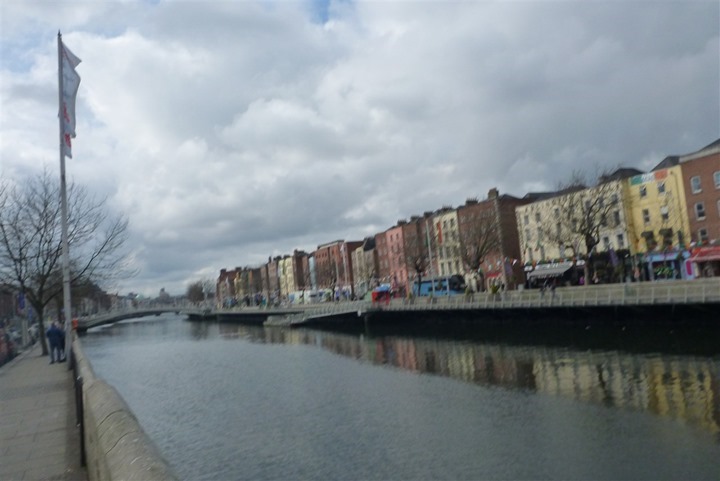 More pubs!  It’s funny, I think all the pubs got a deal on those balloon twisty wraps.  Airport had them as well, almost all identical. 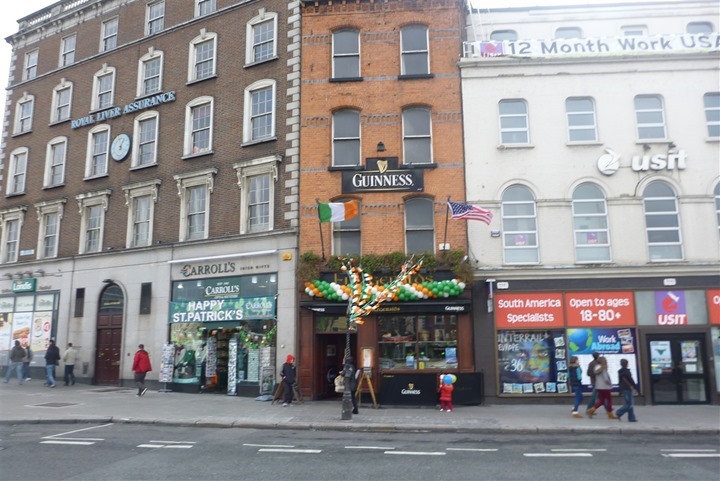 Along the water really was a nice place to run – and for a brief few moments I even had some sun! 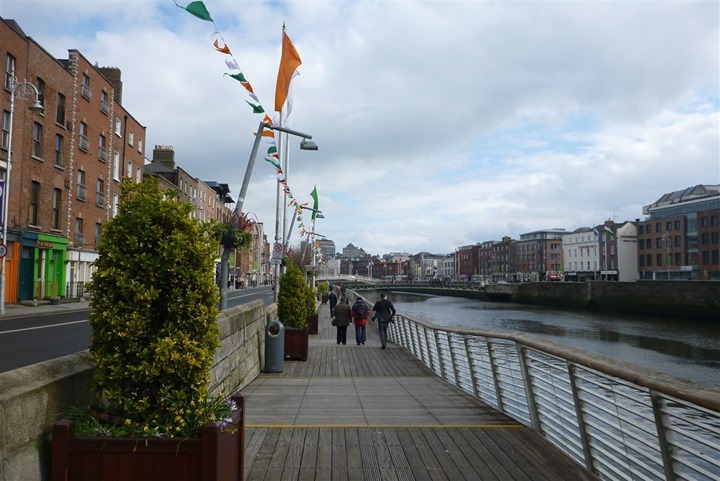 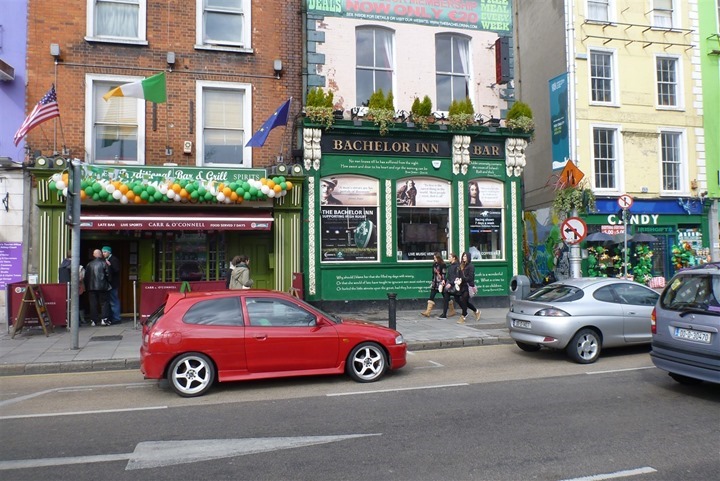 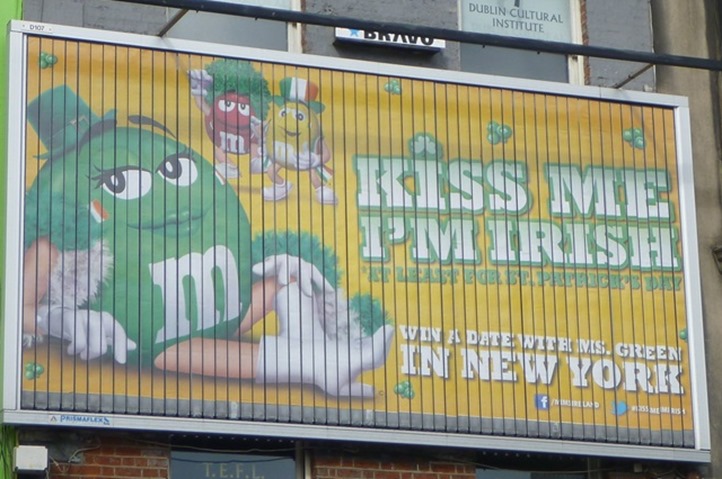 I started working my way back, along mostly the same route as the way out. Time for getting lost this was not! 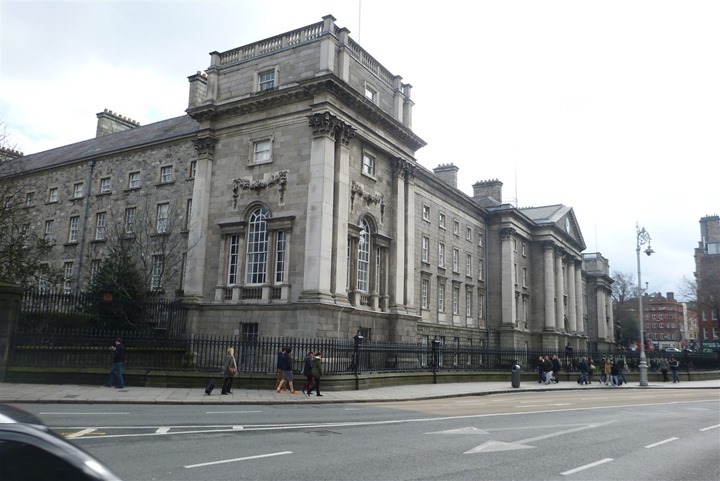 Back past Trinity College (seen above/below). 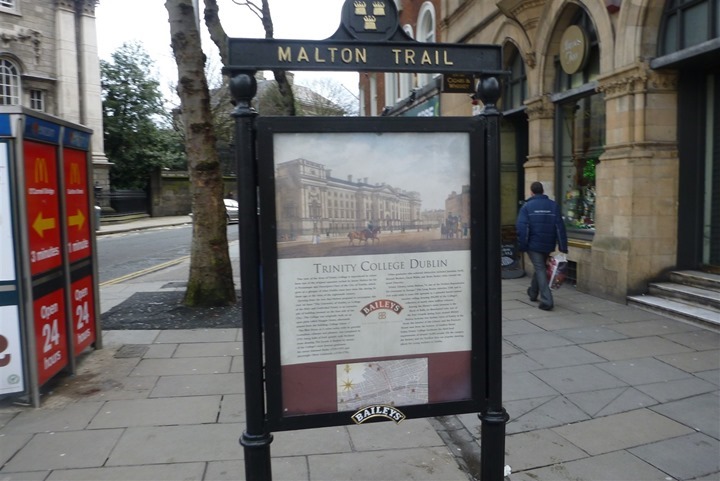 Along the way I stumbled into this guy. 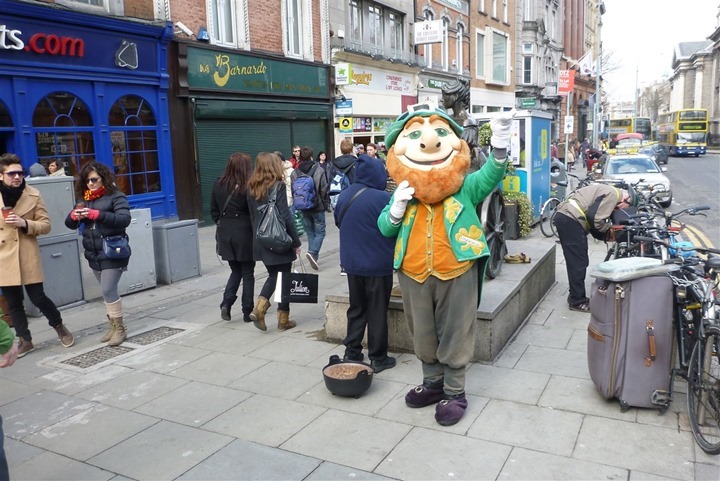 So naturally, I took a photo with him.  Well, ‘with’ is probably a bit strong.  More like ‘he was in the same frame even though he didn’t know it’. 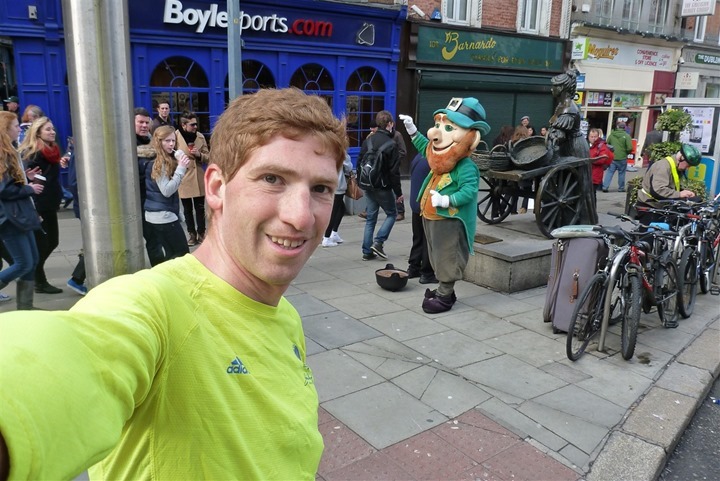 Like many European cities, Dublin has a bike-share program.  The system uses near identical bikes and stations as the Paris system. 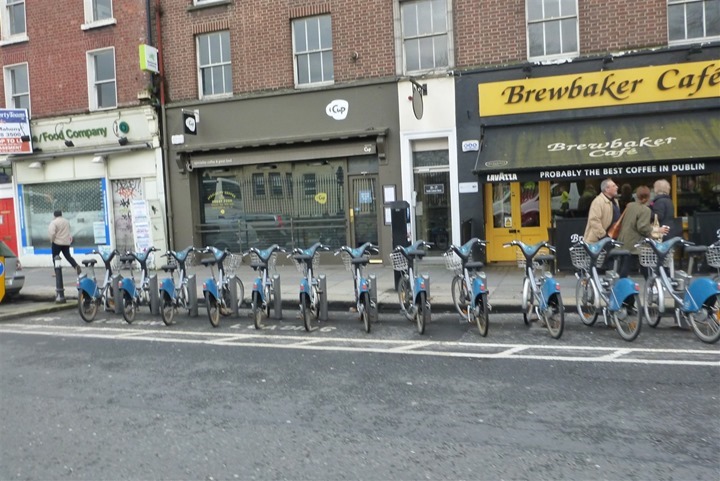 Last but not least, the Dublin Bus Tour.  No, I didn’t get on the bus – I just did the tour via running instead.  Unfortunately, this would be my last photo as my little point and shoot camera battery ran out about a block later.

No worries though, I wasn’t too far from the hotel. 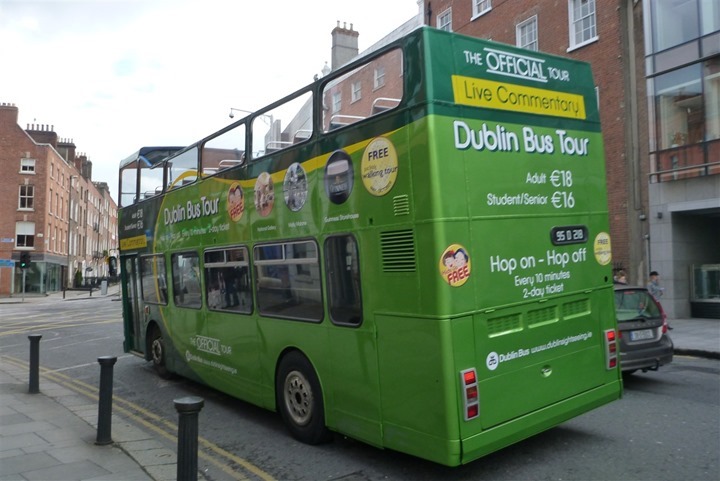 Here’s my total route – 40 minutes worth of running, about 5.6 miles, or approximately 9K.  You can view the Strava file here. 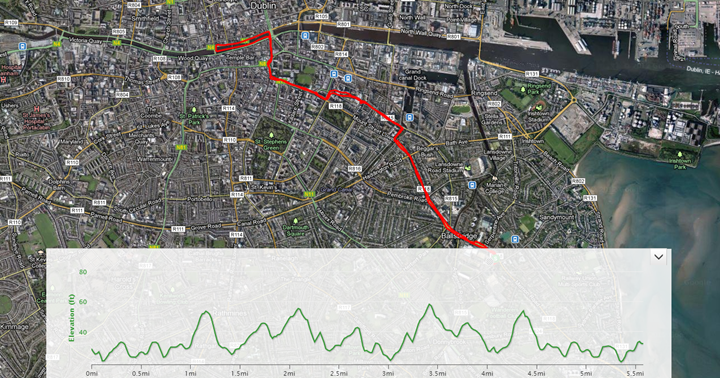 As always, thanks for reading!  And hope everyone has a great weekend ahead!