This was the runaround that almost wasn’t.  But thankfully, the calendar gods parted just enough to squeeze in a run…but only barely.

I arrived into Vienna late last night (Wednesday night), and was just here for a couple of meetings on Thursday before my flight back out Thursday evening.  The meetings stretched from just after 8AM until 2:30PM.  And then I had conference calls until 4PM.  With a flight at 6PM, I wasn’t exactly sure where or when I was going fit in a run.  My hope was that my 3:30PM call would end significantly early.  Regrettably, it didn’t.  So at 3:57PM when it wrapped up, I made like a bunny and changed as fast as possible in the hotel lobby restroom.  By 4PM I was outside, waiting for satellite on the GPS.  That’s when this photo occurred: 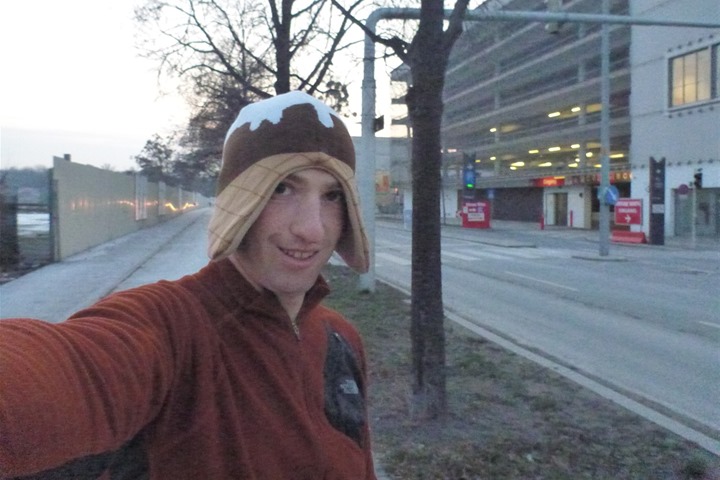 Yes, you noticed my hat is on backwards.  Actually, just after taking the photo I noticed too.  I retook the photo – but the first one came out better.  Thus, backwards ice cream bowl instead.

Thankfully, the GPS watch understood my urgency today and found satellite rather quickly despite being nearly 600 miles away from home.  With that ready, off to run! 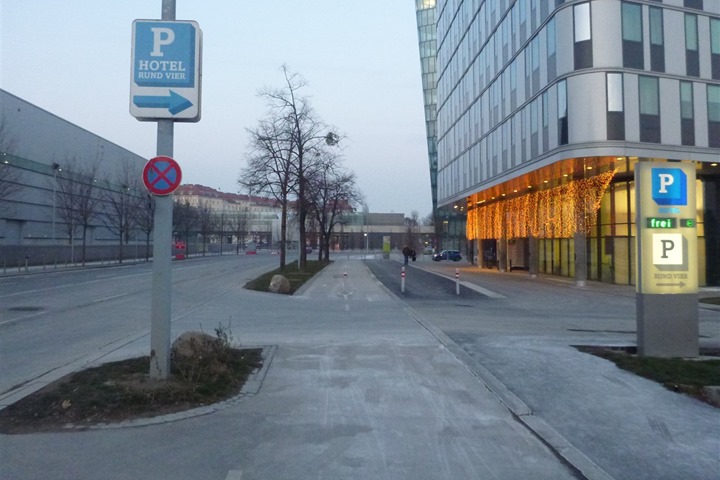 Now, I wasn’t exactly in the most scenic area of Vienna.  Like I’ve said before, sometimes you see pretty and/or touristy places in my runarounds, and sometimes you just see wherever I happened to be.  Today would be the case of wherever I happened to be.  Now, despite not being in the richly historic and beautiful downtown Vienna area, the area actually turned out surprisingly awesome for running. 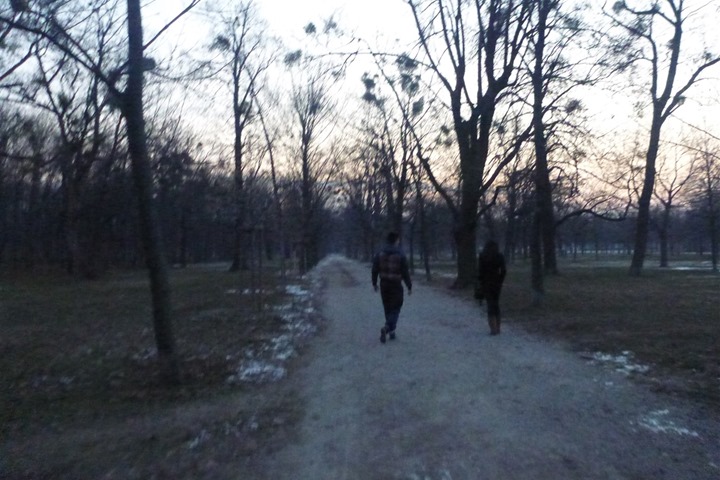 After getting a few hundred yards away from the hotel, it opened up into a massive park.  I had seen this on my phones map, but was pretty astounded at just how vast and awesome it was for runners, or really, anyone exercising or walking (unless you wanted to swim I suppose). 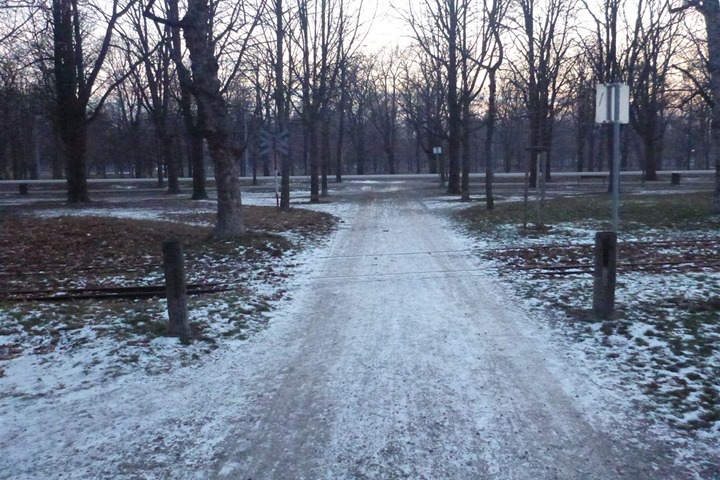 After passing some sort of children’s mini-train above, I came upon a vast carless road that went in both directions for literally as far as the eye could see.  I kid you not.  I couldn’t see the end of this perfectly straight road. 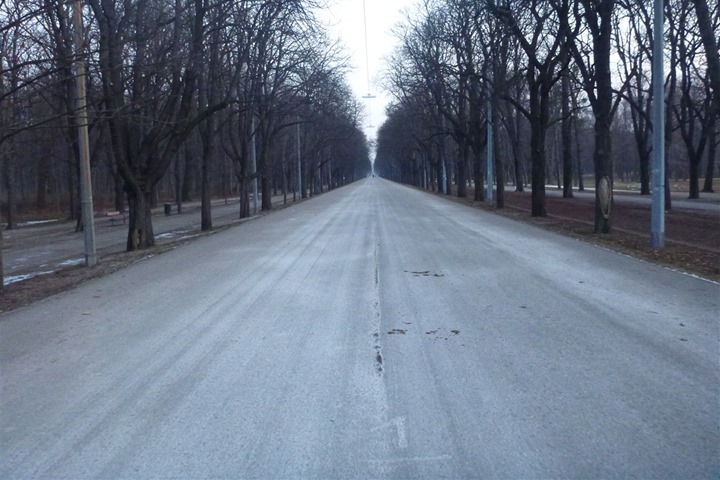 With a small quantity of folks out there walking/jogging/cycling on the empty stretch of pavement, I picked to go left, and kept on running.

Along the way I noticed off to the side through the trees there was a rather large stadium.  I had seen it the night before when my taxi dropped me off from the airport.  Figuring it might be interesting (perhaps like the Seoul Olympic stadium from a month or two ago, or the old Athens Greek Olympic stadium), I headed towards as a detour to check out. 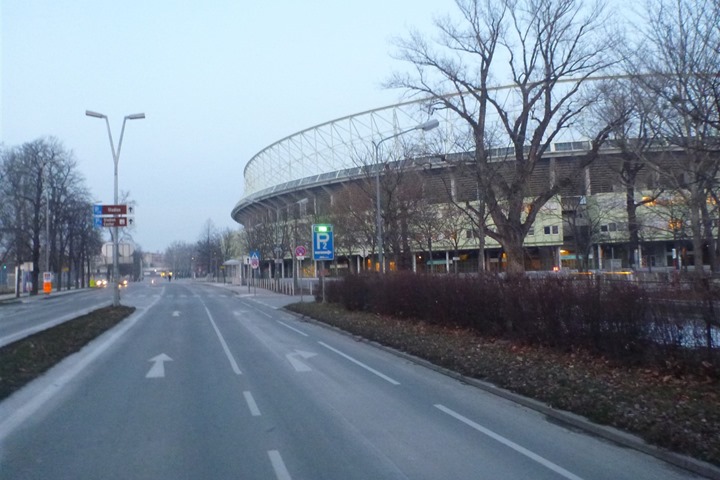 In reality, while it may have been interesting, I wouldn’t be able to show you – since my little camera’s battery got too cold to take photos.  From what I could tell though you actually could go inside and wander around, as it seems a few gates were open.  But since I was doing an interval run, it didn’t really fit too well into my plans.  So I just made a large loop around the outside of it.

Meanwhile, I stuck my camera battery inside my glove to warm it up.  That always does the trick.  Just gotta give it a bit of love and it’s happy again.  Just in case it wasn’t clear by the snow on the ground, it was cold there.  I think about 26*F when I ran, with a bit of wind on top of it.

Soon, I was back on the never-ending road.  Though, it did eventually appear to be going somewhere, with some sort of ending spot in view.  Two more five-minute intervals later, and I finally found the end of it.  Well, at least that end anyway.  There were some fancy looking buildings from times past, but nothing that would have had a chance of showing up in the dark in a photo with my little point and shoot camera.  So, I wandered back towards the other direction. 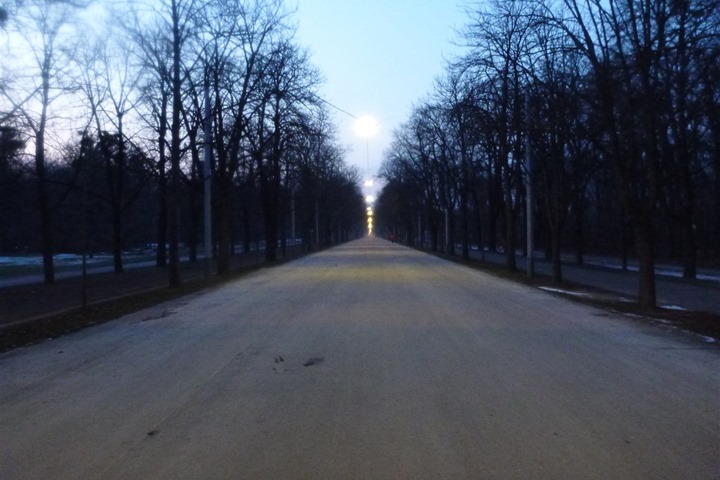 At this point, the sun had completely set, and the light along with it.  However, the city here was kind enough to illuminate the never ending road for runners/cyclists/walkers.  And no cars were allowed or seen on it. 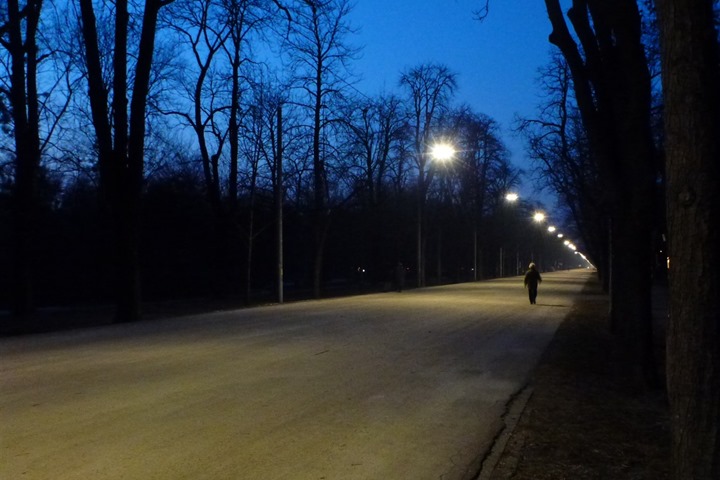 I kept on repeating my intervals, working my way back.  From an interval and/or tempo run location this is probably as good as it gets.  Absolutely perfectly flat, one gigantic wide roadway, with two additional paths on either side (compact dirt, and paved), and being fully illuminated.  Plus, the trees blocked some of the wind.  Oh, and they had 100m markers written on the ground all the way down (i.e. 300m, 200m, etc…).

I’m sure in the summer it’s quite a bit prettier with greenery.  But somehow the light snow on the ground along with the darkness was neat in its own way: 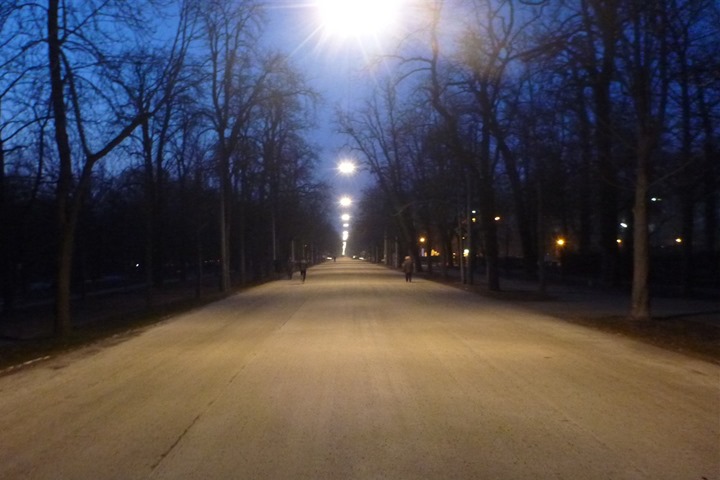 As I was working my way back to the hotel, I came upon my first horse drawn carriage.  I suppose that in and of itself didn’t catch me my surprise.  What did though was that there were soon quite a few more of them – like the Oregon Trail reenacted.  One after another clunking and clapping their way along.  My first attempt at a photo failed miserably, mostly because I wasn’t stopping or slowing mid-interval to take a photo.  It’s a training line and all, can’t cross it.

But, as I was passing another one I ended up wrapping up a work interval a few seconds later and went into my rest period, and got a half-way decent shot of one: 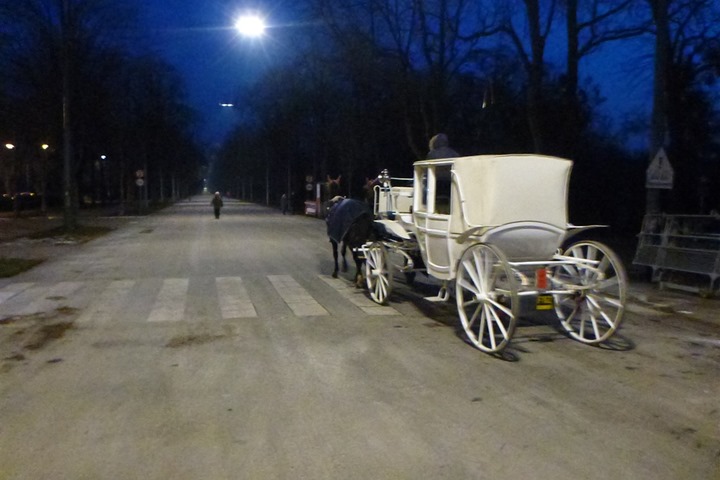 A short bit later I was back at the hotel, finishing up some 200m sprints to wrap up the workout.

Within three minutes of that I had retrieved my luggage from the front desk and was already up eight floors in the health and fitness center at the hotel (BTW: This was without question the fanciest Courtyard Marriott I’ve ever seen in my life.  From the rooms to the food/bar area to the health center.  Like the Courtyard Ritz or something).  And six minutes after that I was down in the lobby area headed into a taxi bound for an airport…with less than 56 minutes until my flight departed. 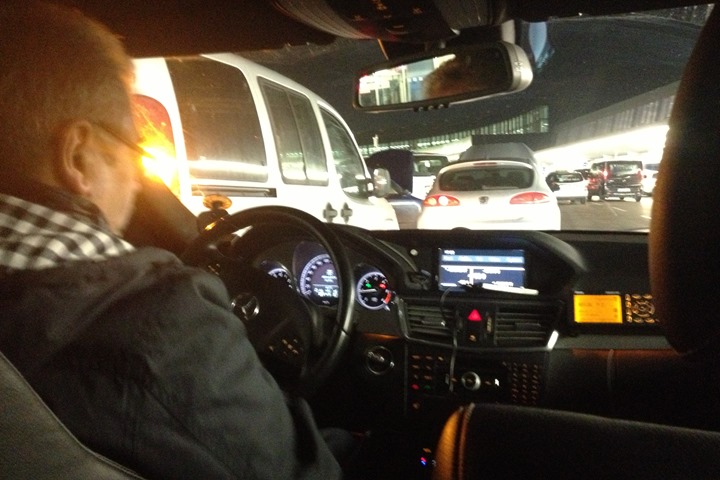 No worries, I do this all the time.  Mostly.

I arrived at the airport at about 5:30PM – and luckily, the very nice Niki Airlines (Fly Niki) folks had already printed off my ticket last night, for tonight – so I was able to skip check-in.  A couple minutes later I was at the gate. 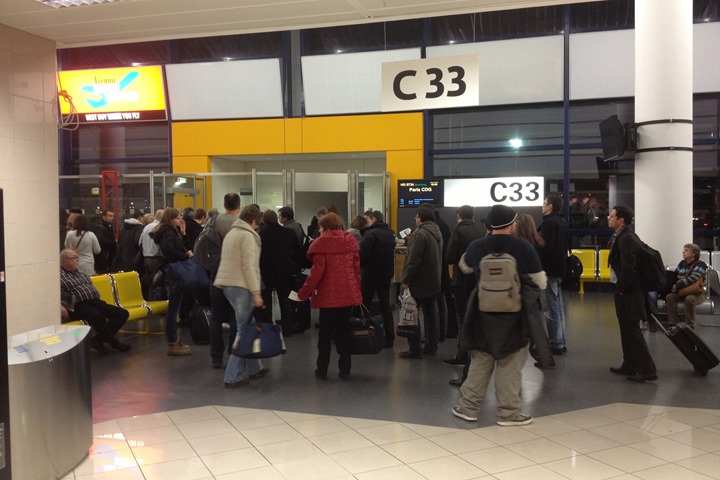 Never heard of Niki Airlines?  Neither had I until…well…two days ago.  It’s a local carrier to here, owned by Air Berlin.  What’s interesting to me (and has no relation to running of course) is that they have a fruit fly as their mascot.  You can see it on the side of the plane. 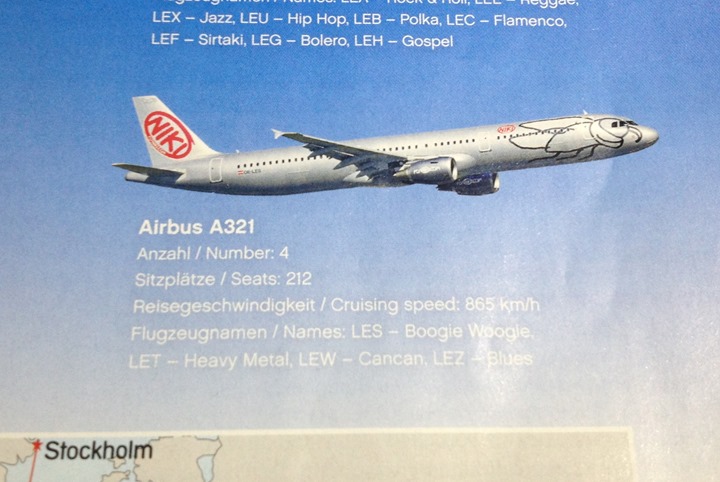 During the safety briefing video, the fruit fly buzzes about and explains to you how to exit the airplane in an emergency (easy for him, he’s a fruit fly), amongst other things.  Also of note is that none of the flight attendants on either of my flights were male.  All were under probably 25, and all were tight fitting jeans…and exceedingly friendly.

Slowly but surely, expanding my repertoire of world airlines to new areas, one fruit fly at a time.

With that – thanks for reading – and hope everyone has a great weekend!