A weekend tapering the run, increasing the bike

This weekend was…well…busy as usual.  With April shaping up to be a bit of a mess travel-wise, I was trying to get as much stuff done as possible before Monday.  Be it spring cleaning, product review shots for later writing on flights, or simply my taxes.  Here’s the run-down of the last three days!

By the time The Girl finished up work at the shop, the light was starting to fade.  Not that it mattered too much, we’d been doing nightly runs in the dark all winter long.  And this night would be the last of the 1-mile interval runs before the Paris Marathon next weekend.

The Girl was pretty excited about this (the ending of the intervals). 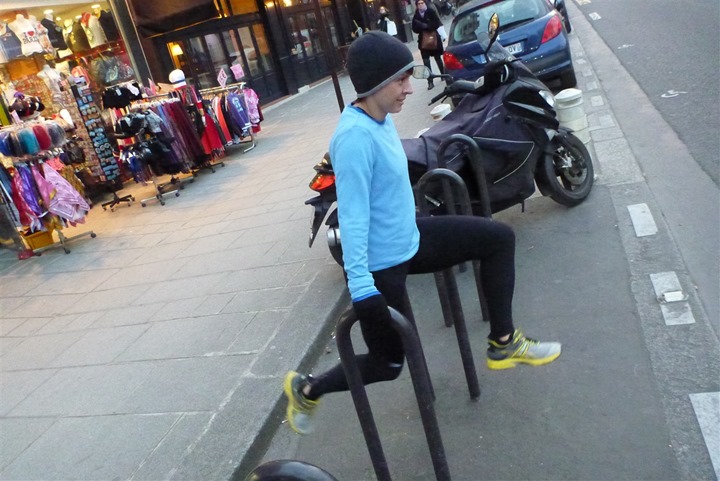 While we normally do the intervals over at Bastille around a roughly 1-mile loop, tonight we just did them up and down along the river.  It was quiet, and with it being sorta a holiday on Friday (bank holiday) in France, there were plenty of people out and about.  Monday was/is the full-on holiday attached to Easter.  Thus most people make at least a 4-day weekend out of it. 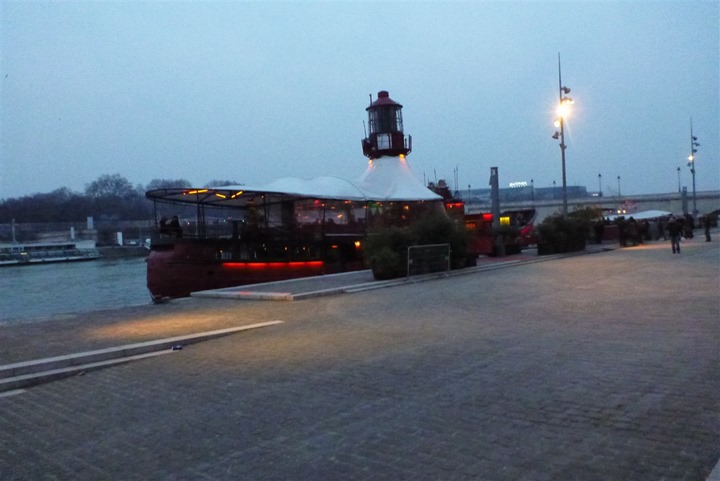 The intervals themselves went quite well, a bit too fast at times actually, but perceived effort was better than expected for the paces.  So that’s a positive sign of a good taper starting to set in.

On the flip-side, here’s a negative sign.  These are down near a cement truck place that we usually turn-around at, almost 2-miles to the dot from our front door.  It’s also where the waterfront goes from scenic to industrial in the span of one bridge underpass.  The below are actually small pools, perhaps only a few feet deep.  Something to do with the concrete, but usually filled with a milky looking water.  No swimming plans though. 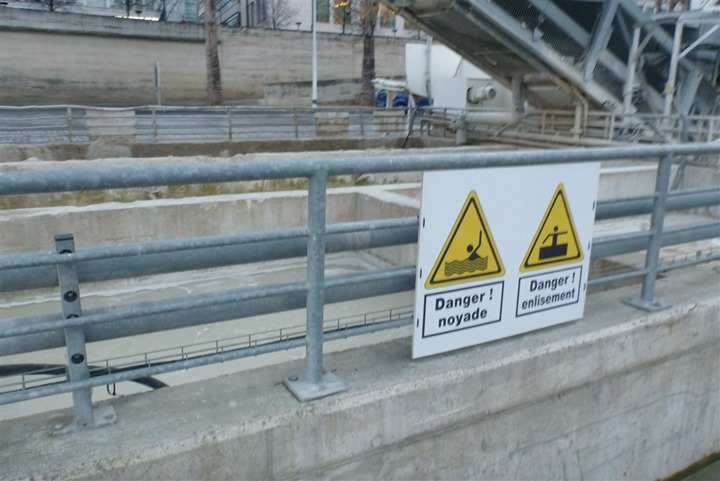 As we finished up the 1-mile repeats, we did a handful of 35-second sprints.  We almost always do them along the river on a nice flat non-cobble stretch starting just out of this tunnel.  It’s also got a nice view.  As always, almost all photos here taken with my little camera that I run with. 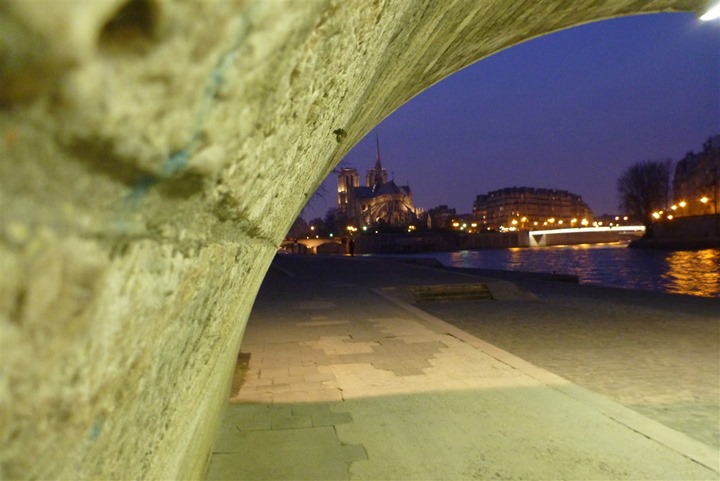 With that, run done!

I had brought up the bikes to the bike shop on Friday evening to get tuned up.  Mostly just little things, but nice to get them in at least once a year to have a good mechanic go through everything.

Doing so here does mean renting a little Autolib car for the short journey over (I was taking both bikes, as The Girl was busy working). 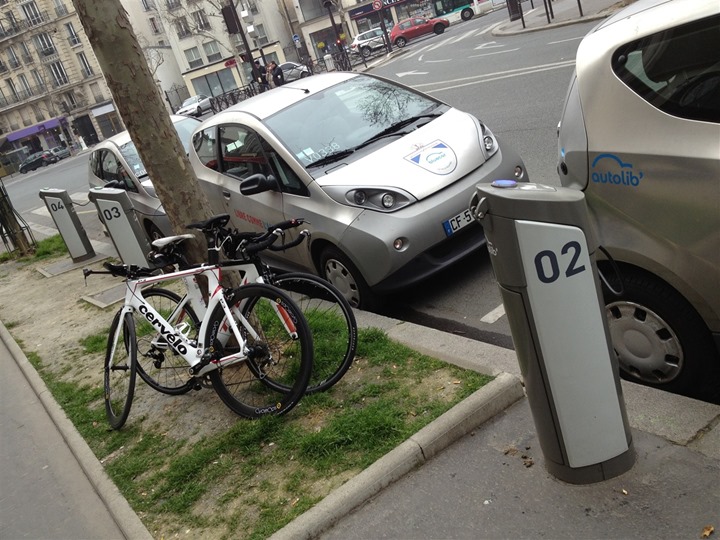 I will note that I’m particularly proud of my car packing capability.  Both bikes fit into the little car, with neither bike actually touching the other on the frames.  Nor with any gearing/chain parts touching any seats.  The trick is usage of the wheels and aerobars to elevate off of the surfaces.  Effectively floating.  It’s brilliant.  And, I’d actually be able to put a person in the backseat behind the drivers seat too!  The bikes are also pretty well ‘locked in’, in terms of movability, mostly because of the way they’re wedged in. 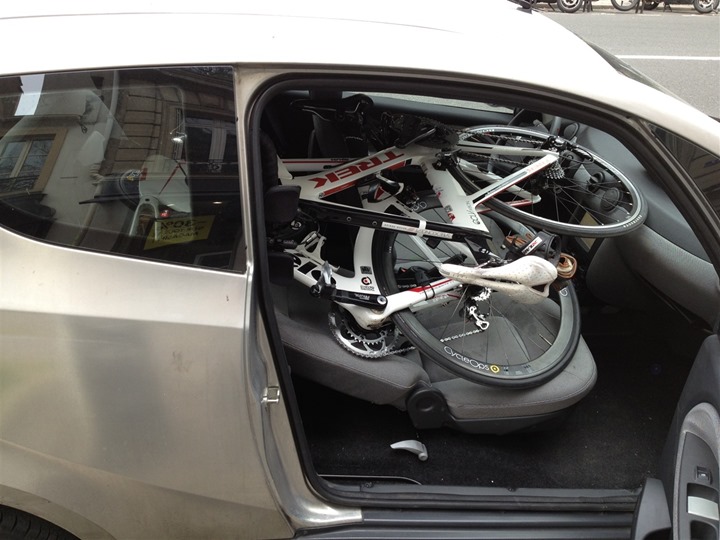 With the bikes home, I wasted little time in getting back outside.  It was snowing across much of the rest of the region (though not in Paris proper), and I really didn’t feel like getting caught in either snow, or rain.  In fact, just as I was pumping up my tires I noticed some light snow flurries.  Thankfully, they quickly disappeared like a fart in the wind.

Last weekend I went out to the westerly park area – Longchamp.  This week I decided for the easterly side – Bois de Vincennes.  Both take about 25-27 minutes to get to until I’m in the safe-haven loops for cyclists.  But the Bois de Vincennes allows me to hit the park perimeter road at about the 17-18 minute marker, at which point it’s pretty much smooth sailing.  So I get a bit more stable ride time out of it.  And getting there doesn’t require crossing directly through the busiest roadways of Paris.  And once there, it also tends to be a lot quieter, as you can see below. 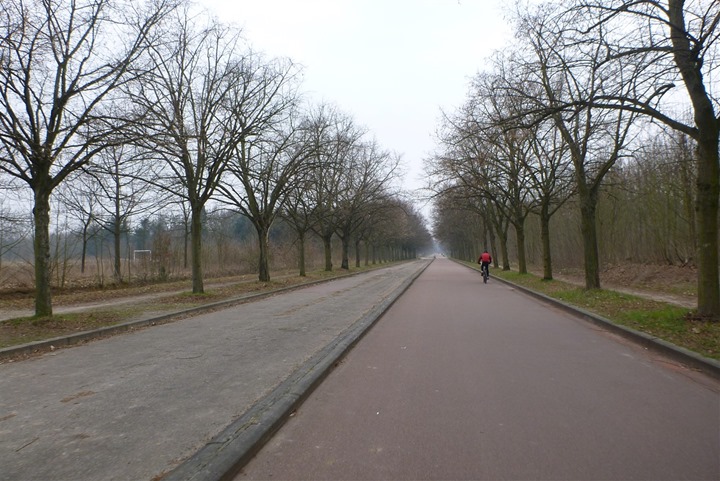 One sport I wasn’t expecting to see on the soccer fields was folks training for kite-surfing.  There was a bunch of them out there, clearly as part of some organized class.  The Girl and I saw these down in Perth a few weeks ago, and both commented that if we lived in a destination that supported it (read: warm, with water), it’d be a blast of a sport to learn. 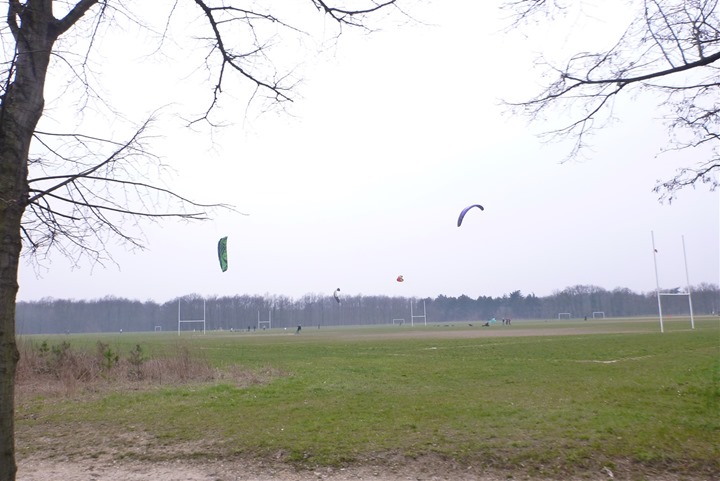 My workout was 1hr 30 minutes of Z2 loops, plus some sprints after that, then the ride home.  So, all in a touch over 2 hours.  Like every ride lately, lots of power meter testing going on.  Along working through the O-Synce Navi2Coach testing.  I’m sorta running out of places to stick stuff.  And while I could put some of the units in my back pocket, I prefer not to because then I’m unable to monitor when things go wrong (an unplanned drop/issue/etc…). 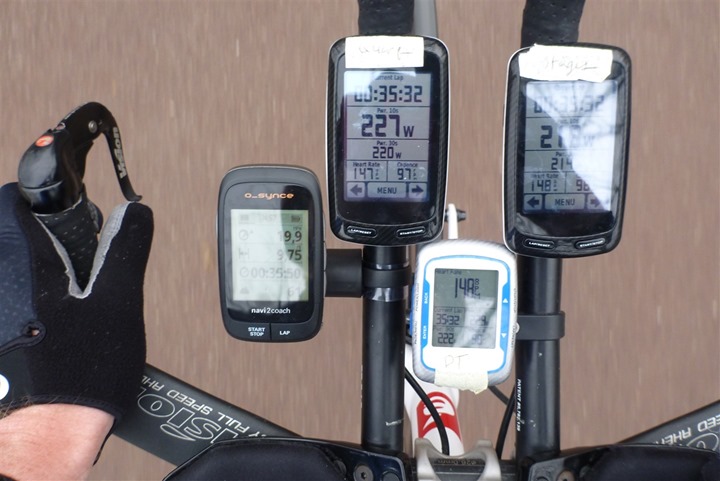 I did see two triathletes out there during my loops (with jerseys labeled as such).  Beyond that, just a few small pockets of cyclists.  Each loop took me about 5m and 20 seconds at a nice comfortable Z2 HR.  Rough average speed per loop was around 20-22MPH.  It’s fairly flat, though the winds were out a bit (as evidenced by the kite-surfers). 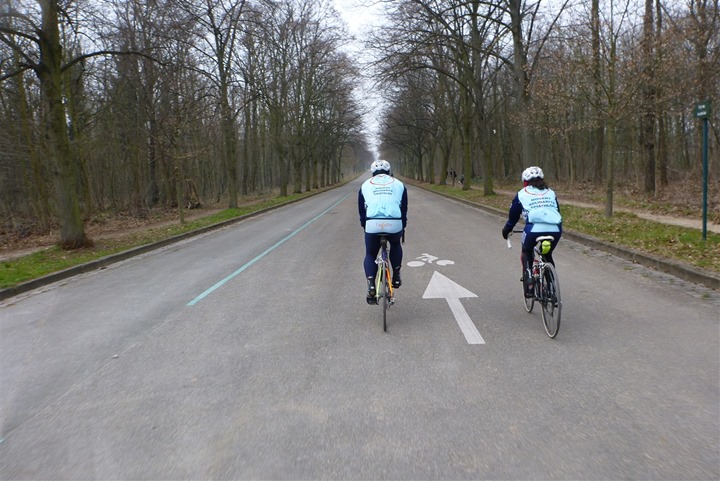 The only part where it got a bit awkward was the last 5-10 minutes before the the sprints.  I had pretty much been in my own world for the vast majority of my workout.  But those last few minutes I made a slow pass on a small group of guys that were rotating in a pace-line together.  They took that as the invite to jump on my rear wheel.  Which is fine, except then (as usual), they expect that I’m going to drop back when they jump to the front (and subsequently don’t go as fast).  No worries, I just pulled out and to the side a bit and called it good.  I let them go ahead a bit, but ultimately they weren’t holding the lead.

So the awkward part comes when I start doing my sprints.  These were 20-seconds hard (600-800w usually), though I brain-farted and did 30-second sprints.  During the sprints I easily closed the gap you see below to the furthest cyclist you see, passing them at about 30MPH to their 20MPH. (50KPH to their 30KPH).  Of course, as soon as my sprint is done, I’m sitting back up and coasting off to the side nice and easy.  They seemed confused by this, thinking I was challenging them or something.  I feel like I just need a sign sometimes that says “I’m a triathlete, I’m just doing my own thing.”.  Like a little bumper sticker for my bike. 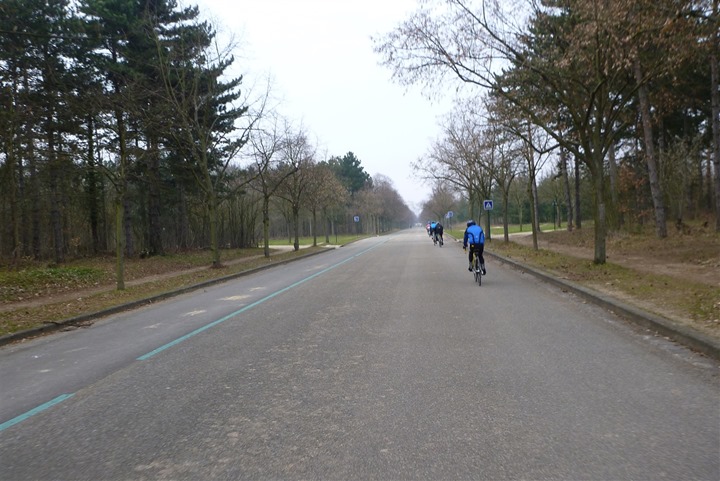 Like my ride towards the other side of the city last week, this week on my way home I also saw more of the marathon markings.  I’ve decided that the kilometer markings are (as expected), every kilometer.  But the mile markers are present every 5 miles.

Interestingly, I had wondered if they just left the markings after the race, or how that worked.  As I was pondering that I noticed little bits from past markings along this same stretch (popular for races).  It appears that simple black paint is applied.  And in fact, if you look closely at the current markings (in person), you’ll notice the green painted line sits atop a black painted line – likely from years past. 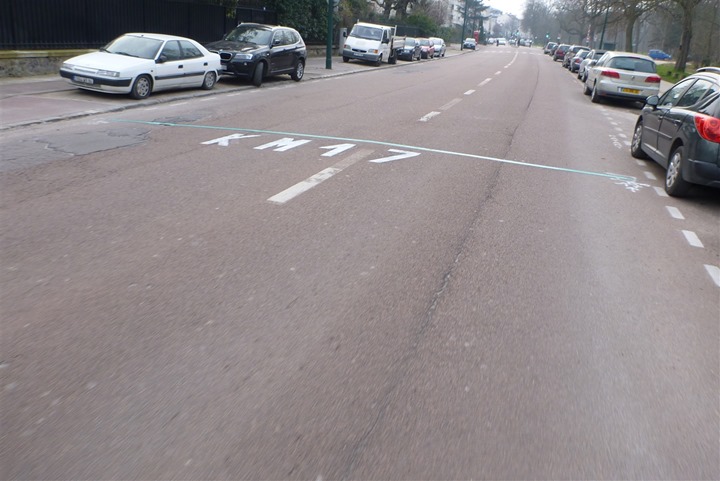 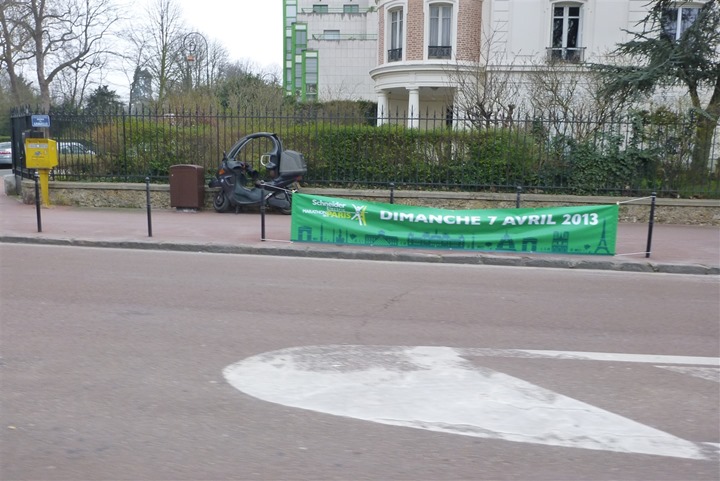 As I came down the final home stretch and the last few hundred meters of my ride, I once again saw the little blue train.  It’s definitely new this spring, as I now see it almost daily in our neighborhood, winding its way on the tiny little street directly behind our place. 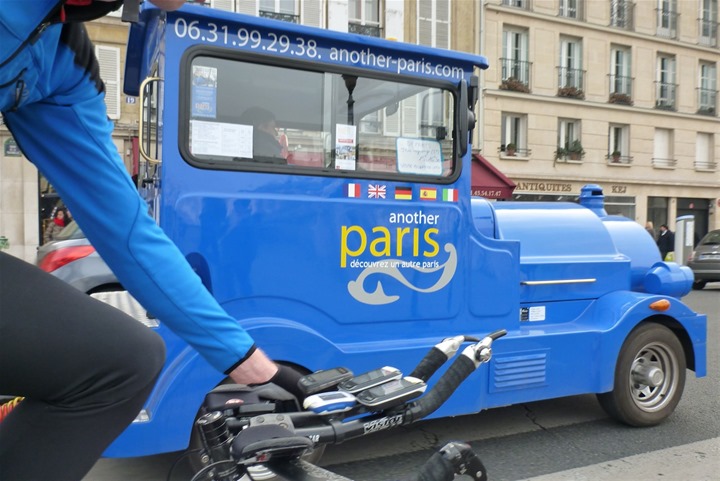 Upon finishing up I stopped all the Garmin’s, and then shut down the WASP that I’ve been using.  I had a second iPhone (an older one) dedicated purely to recording the data.  No cell networks or anything, just simple WiFi to the WASP and pulling the data in from all PM’s.  It was somewhat interesting at the end of the ride to look at the software and see the other ANT+ devices that the unit picked up along the way… 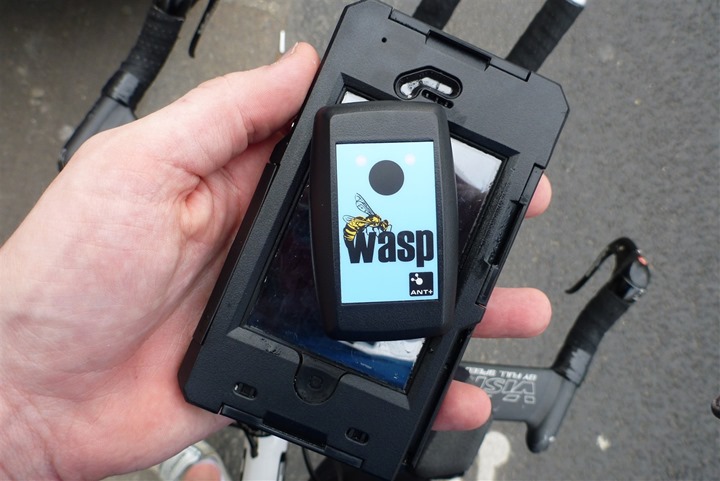 For those curious about the ride, here’s the ride data up on Strava (just one power meter’s data).

Here in Europe, we jumped forward an hour this Sunday…making Easter a wee bit more painful than it was for those of you in the US.  Also of note, Notre Dame took full use of their newfound bells this morning, setting what was probably a bell ringing record.

I wandered over to drop off a few things at the CupCakery, and on the way back sat in the bleachers outside for a few minutes and watched mass. 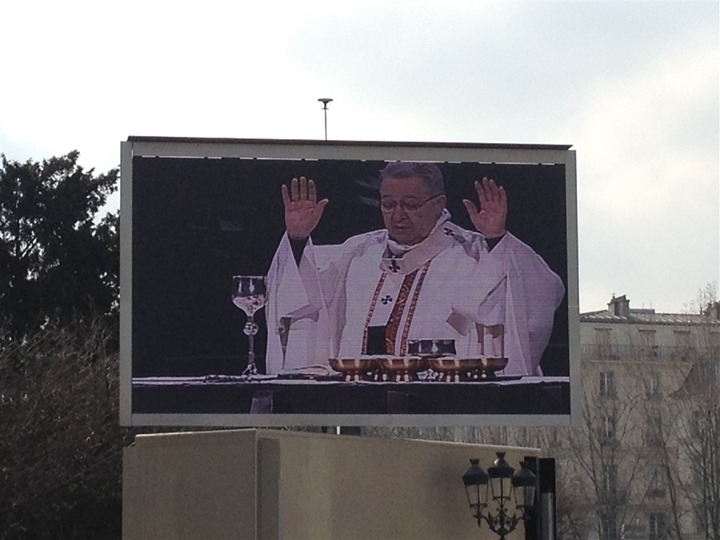 Then upon coming back a few hours later (yes, hours), mass was still going on.  So, I went ahead and peeked in for a few minutes to watch from the back (a separate section being for just passing through).  Listened to the choir for a short bit. 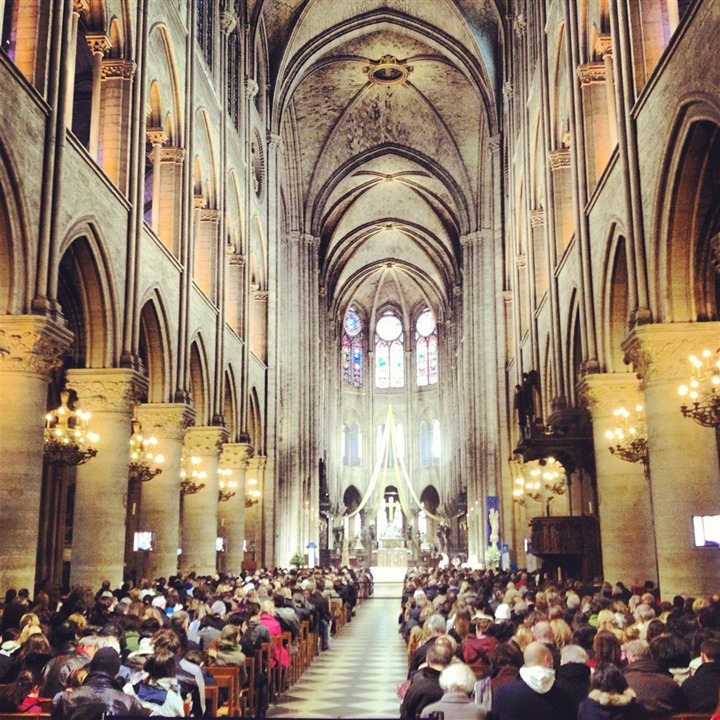 With my church visit complete I headed home and setup an Easter egg hunt for The Girl when she would arrive home later on.  I had been eyeing some of the chocolate creations at the grocery store the past few weeks, and picked up some here and there as I’d see stuff.

In fact, the variety of chocolate Easter creations here is somewhat impressive. 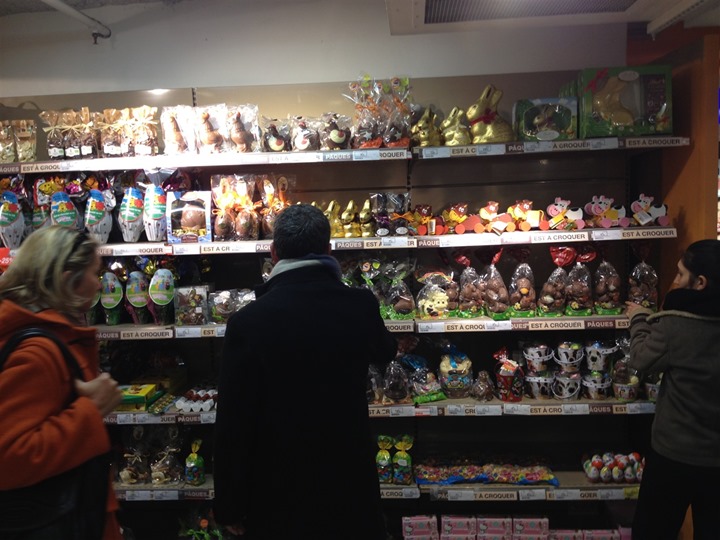 Chickens are popular.  As are roosters. 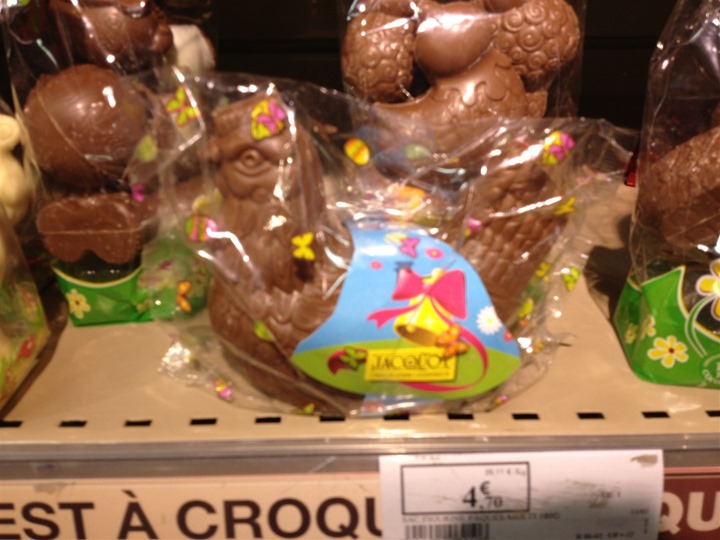 Also, as I noted yesterday, little Finding Nemo fish are also quite common.  I’m not clear why.  But, I’ve noted that the French never shy away from applying a fish to any gastronomic situation. 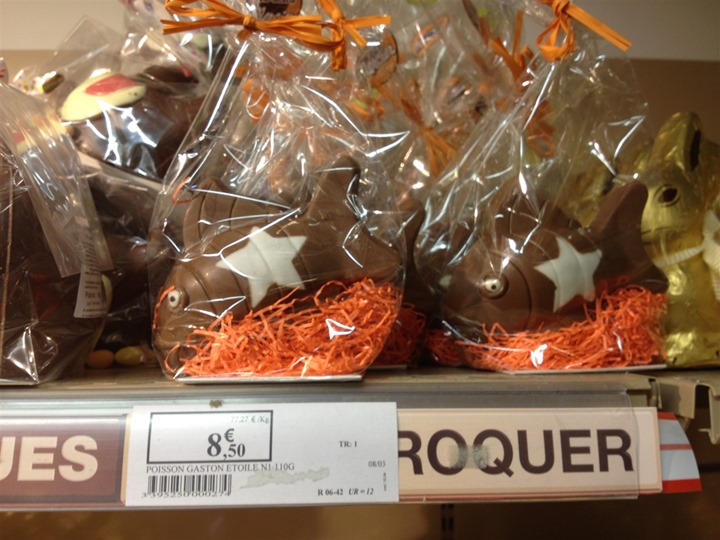 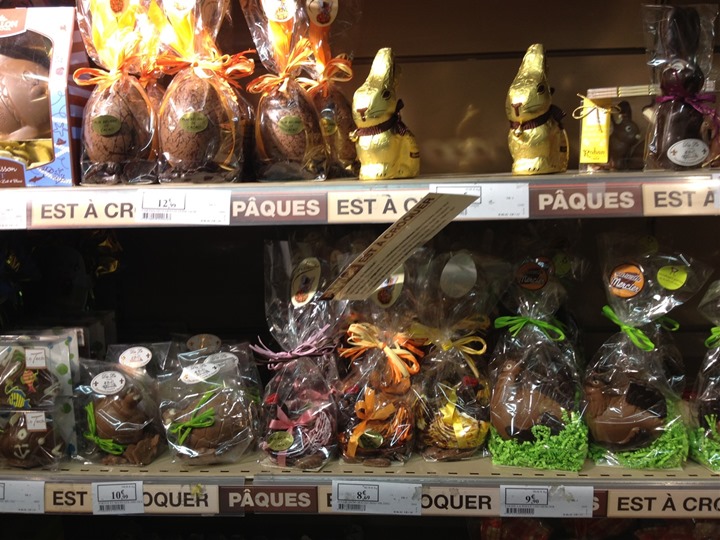 So, I just kept it simple.  A few small dark chocolate bunnies, some eggs…and a chicken.  Clearly, I had to get the chicken.

Back to Sunday afternoon…

Got all the eggs ‘hidden’ away.  Decided on just using the main living room.  Which provided plenty of triathlon-related places to stash eggs.  Some obvious, some not as much. 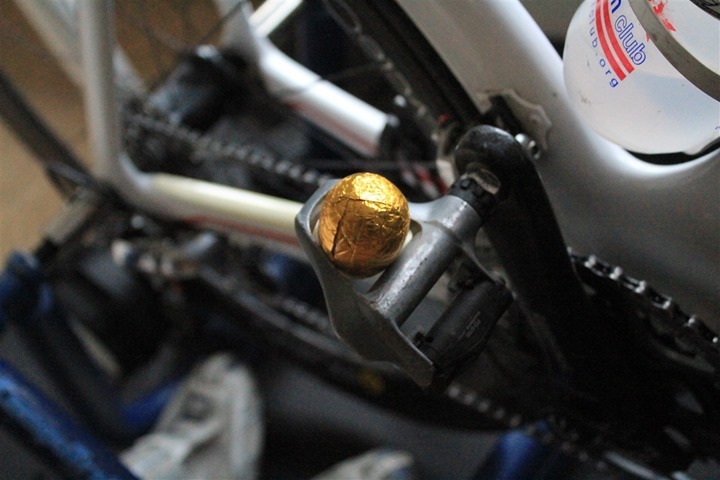 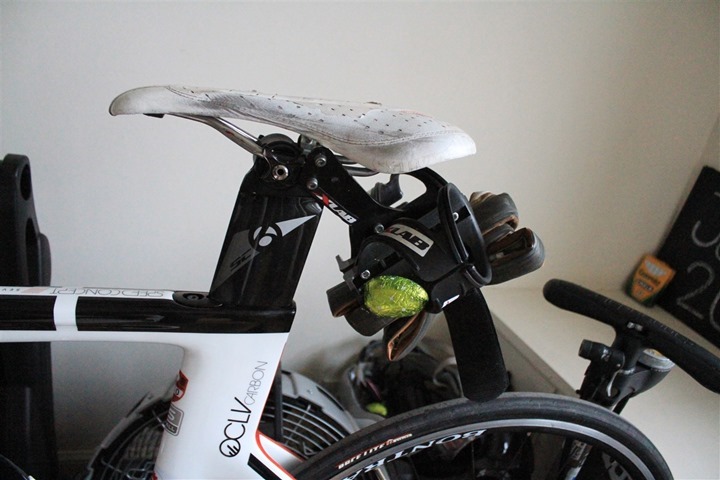 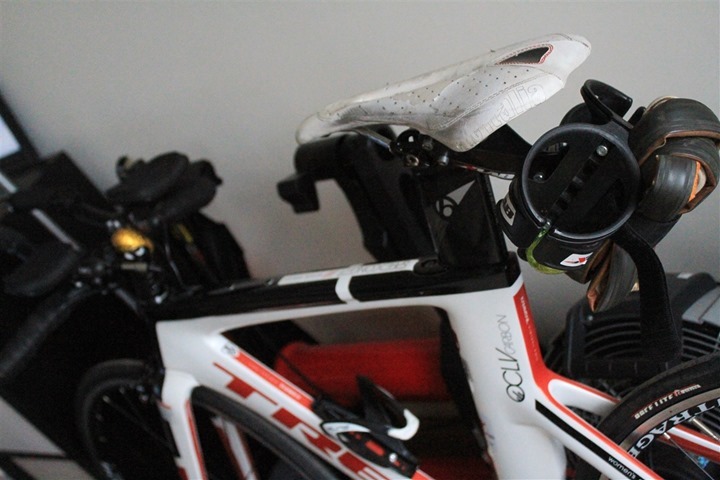 And of course, The Chicken.  She went in a bucket.  Wasn’t really sure where to hide her.  Kinda hard to hide a chicken.  The Girl wasted no time though in going after the bunny. 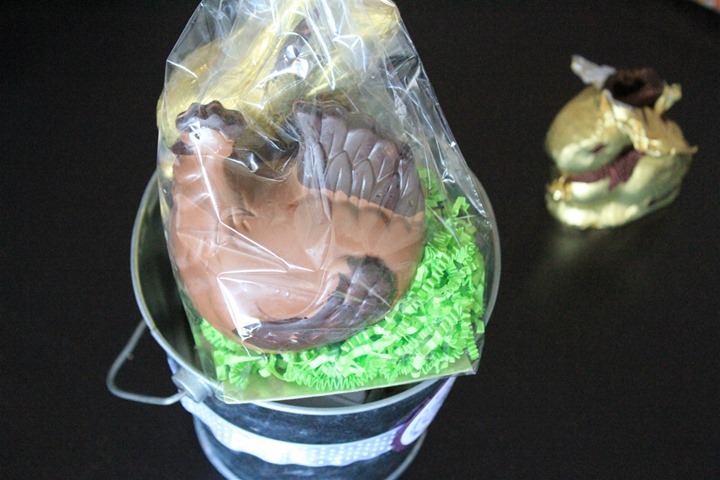 Regrettably, I don’t have any pictures of our little Easter egg hunt, nor the 60 minute Sunday run that proceeded it.  Sorry!

With that, it’s off to bed I go.  Got a painfully early trainer ride before heading out for about 9 hours of flying.  More on that tomorrow…

(P.S. – Don’t forget to enter the ‘Easter You Win You Choose Gadget Giveaway!’, which ends at the end of today, Monday)