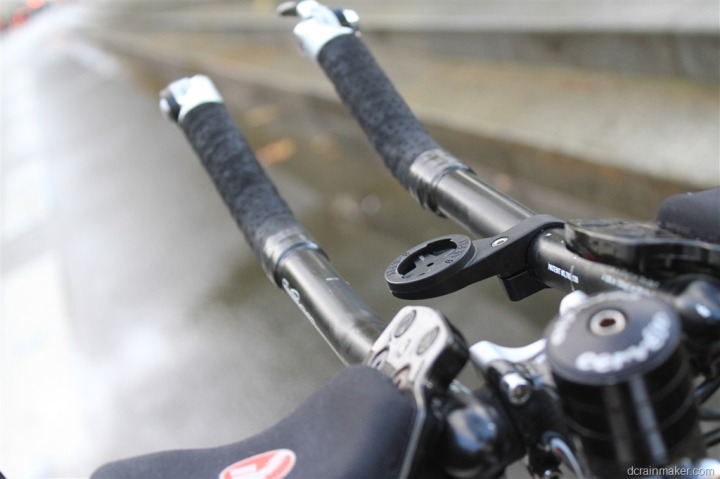 There’s been a lot of forward and aerobar mounts popping on the market in the past year or so.  Since the introduction of the Garmin standard quick release kit for both the Edge units (Edge 200/Edge 500/Edge 800), and the Forerunner triathlon watches (FR310XT/FR910XT) – many 3rd party companies have gone to town making custom mount kits.

Some of the mount kits are incredibly expensive – up to hundreds of dollars as part of integrated stem systems.  And some are incredibly cheap – $5 in parts of Asia at some cycling stores.  For the most part, the lower end ones work the same way.  A few cents worth of molded plastic that holds your Garmin device of choice out in front of your handlebars, or off to the side of your aerobars.  And most of these sell for about $20-40 – apparently the magical number.

Except the one challenge has been the not-so well aligned difference between the Edge and the Forerunner units on the back quick release module.  Take a look at the below image to get an understanding of what I’m talking about.

In particular, note that on the Edge 800 (and the 500 and the 200), the wing tabs are at the 9 o’clock and 3 o’clock position (on the quarter turn mount molded to the center of the unit).  Whereas on the Garmin Forerunner 310XT and 910XT quick release system, they are at the 12 o’clock and 6 o’clock position.  This meant that if you picked up a mount for the Edge bike units, your Forerunner unit would be sideways.  Or vice versa.  Some 3rd party mounts did include a little screw inside to alternate the direction of the adapter – but that’s annoying for those with multiple units (a more common scenario that you might think). 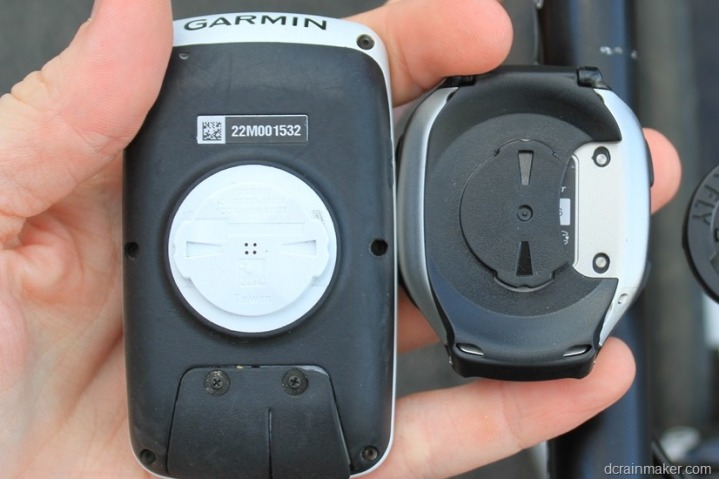 Now, before we get into the mount itself I’m going to continue this little diversion regarding the back of the Edge/Forerunner units being different.  It’s a question I get a lot.  And even a question I’ve asked Garmin a few times – albeit without a clear answer.

However, I’m reasonably certain I’ve pieced together why the units are different.  See the first unit to use the quarter-turn mount system was the Edge 500 back in September of 2009 (Eurobike/Interbike announcement).  At the time, the engineers decided on the 9AM/3PM positions.  It probably made perfect sense for them at the time and didn’t think it would post any long term problems.

Life continued along just great until the Forerunner 310XT came out later that following spring (arrived around June 2010).  Given the success of the quarter turn mount over previous mounts, I suspect the Forerunner team decided it was only logical to adopt it as well.  Except they faced one problem: charging.  See, if you look at the image above you’ll notice the two metal dots on the right side of the Forerunner (same for both 310XT & 910XT).  This charging clip has been shared with some previous Forerunner units, like the FR405 at the time (now the FR410).  In fact, that same charging clip actually works with the FR110/FR210.

If they went with the 9AM/3PM wing positions for the quarter-turn mount (like the bike computers), it’d block the charging connector cutout that you can see (on the triathlon units).  Obviously, that’d be a fail.  So they simply rotated it vertically to the 12PM/6PM positions, which alleviated the problem.  Given the rubber mounts at the time took about 15 seconds to change positions, it wasn’t really too big of an issue.

It wasn’t really until about 12-15 months later that we started seeing some of the first 3rd party mounts on the market that the problem started becoming more obvious.  More custom mounts, more complaints.

As noted, many 3rd party worked around this by simply adding a screw to rotate the locking plate on the mount.  Though many mounts didn’t even offer this.  You can see the diversity of mounts made via this Slowtwitch thread showing just how many mounts were/are out there.

Ok, mount history lesson diversion complete – back to the specific mount in question. 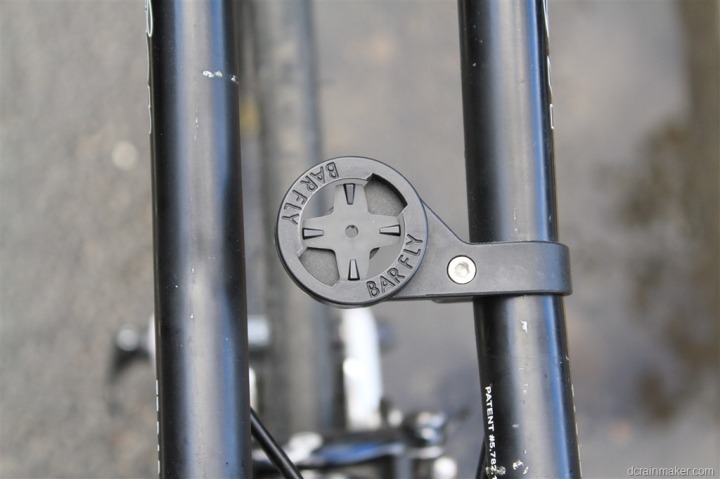 I met up with the Bar Fly (well, technically the Tate Labs) guys at Interbike.  You probably remember my note of meeting them under a fake Tiki shack setup on the show floor.

They handed over a few mounts, but it was their newest mount – the Bar Fly TT that I was most interested in.  Technically part of their second generation products like the new Bar Fly 1.1.  Sometimes called the Bar Fly Aero TT or TT Aero, or just ‘new Bar Fly’.  Yeah, it’s kinda confusing.  Just hang with me.

See, this mount solved the whole wrong way mounting problem once and for all – with no screws required to swap variants.  Simply mount either unit and turn 1/8th a turn and go. 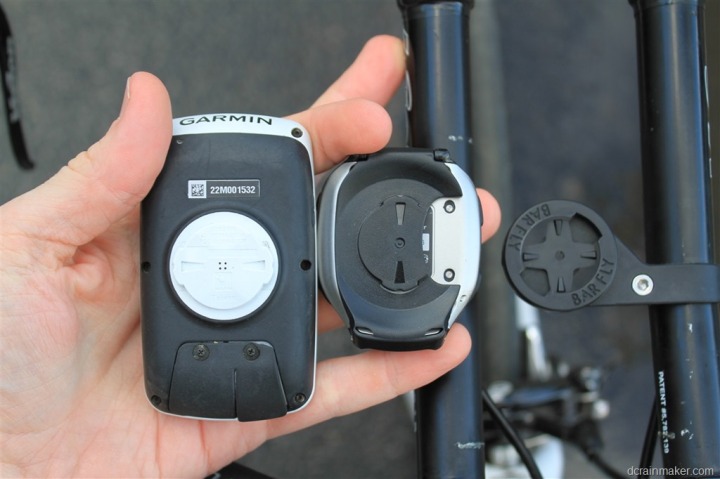 The reason it works is because the mount is aligned at the 1:30/7:30 positions – which means you simply place your Edge or Forerunner in the slot and then rotate either left or right.  It’s quite frankly brilliant.  And I’m somewhat blown away that nobody thought of something this obvious in the last 2.5 years. 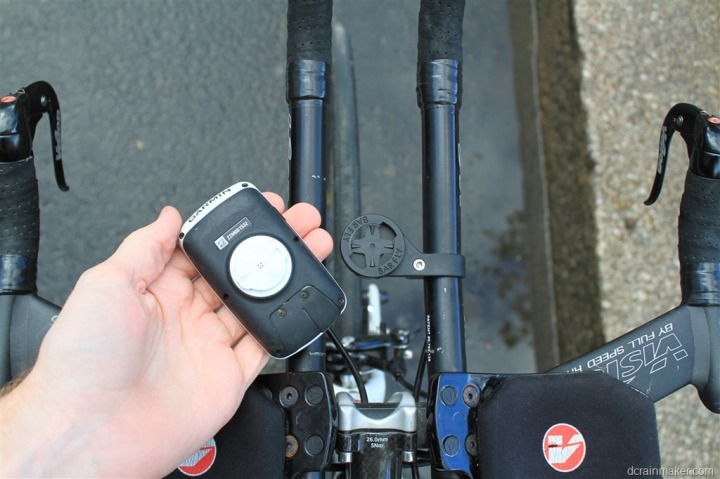 The mount is low-profile, so it sits fairly low in your bars.  You don’t actually want it sitting too low, as it’ll otherwise prevent your ability to remove your Garmin device (remember, it still has to quarter-turn). 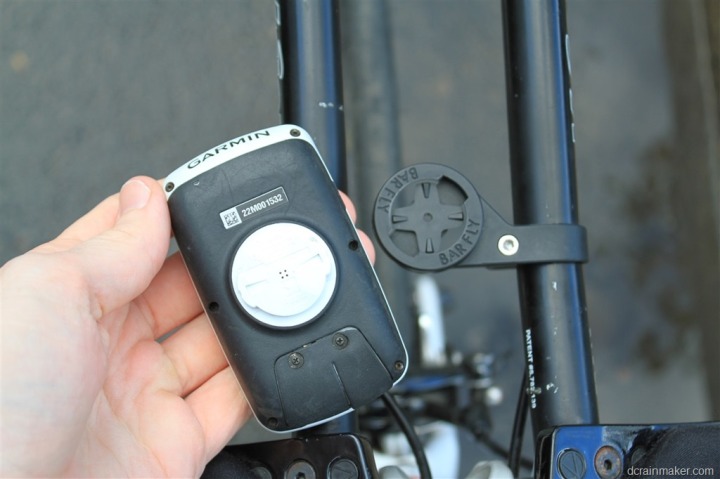 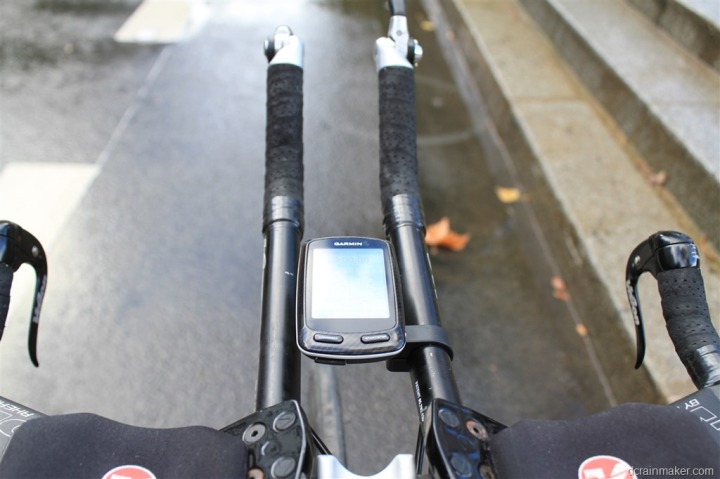 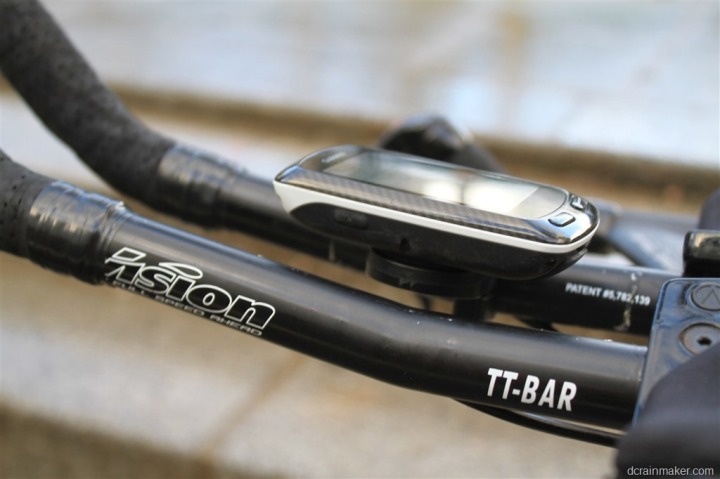 For those with either the Edge 200 or Edge 500 – they work identically the same way.  Same mounting system, same mount.

Use with the Quick Release Kit:

And here’s some photos of the Garmin Forerunner 910XT in there: 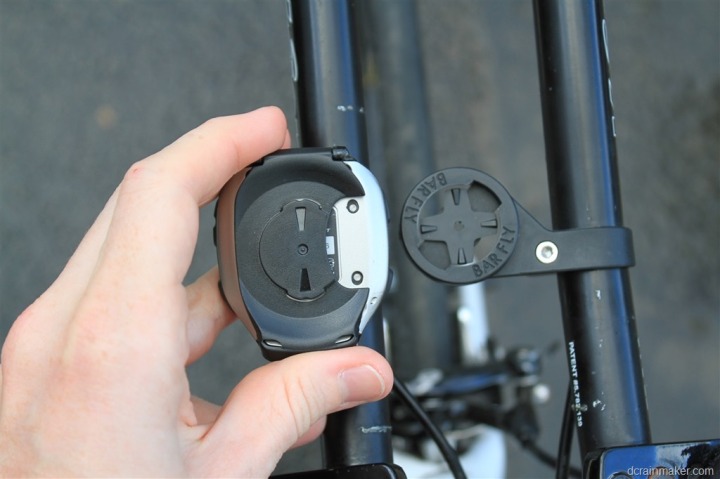 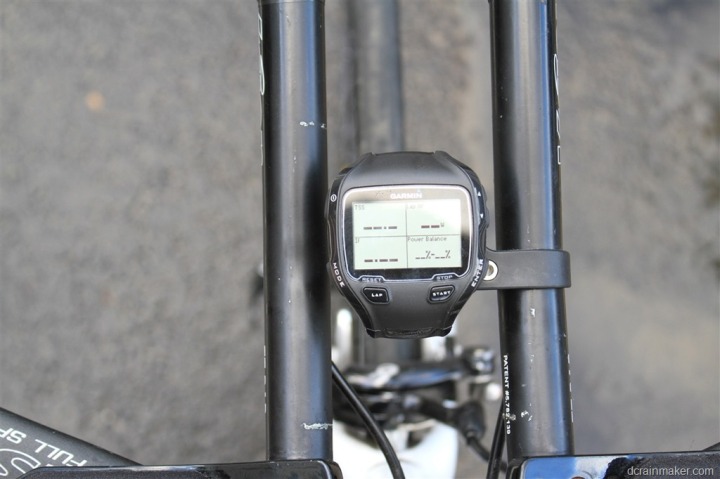 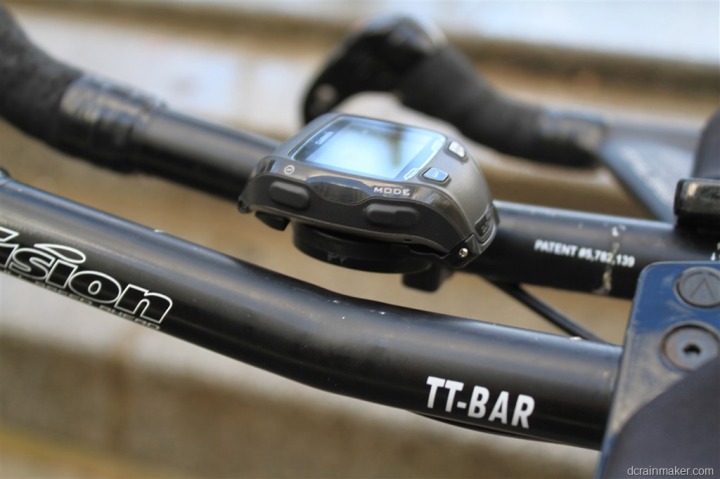 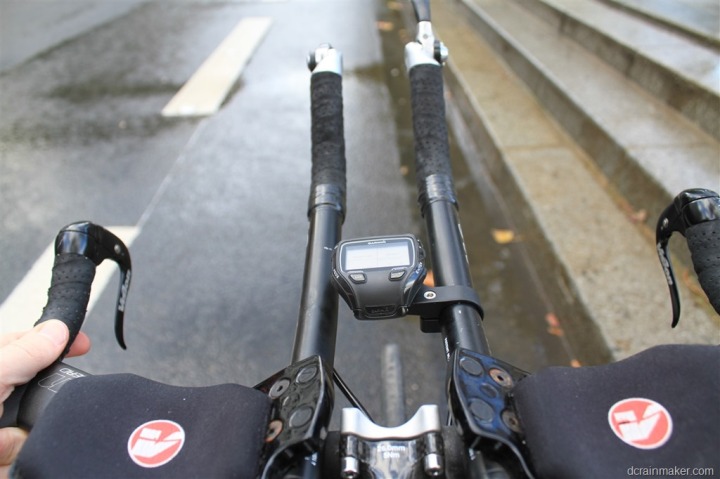 And again, this works identically with either the FR910XT or the FR310XT and the extra quick release kit.  This will not work with the older Garmin FR305 – as that’s an entirely different mount system.  Apples and Kiwis.

You’ll notice in my case it’s set a tiny bit left of center – perhaps half a centimeter or so.  This is simply due to the currently aggressive position of my aerobars being closer in than normal.  Obviously, depending on the width between your aerobars, it’ll vary how far ‘off-center’ it is.  Additionally, you could mount it on the outside of your bars if you wanted to. 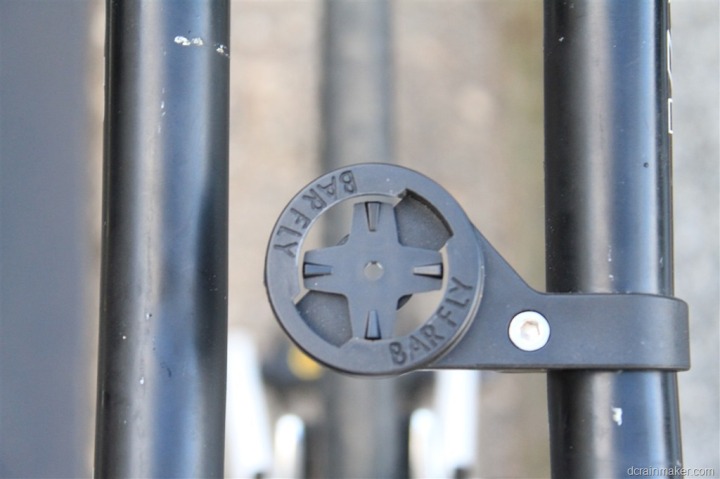 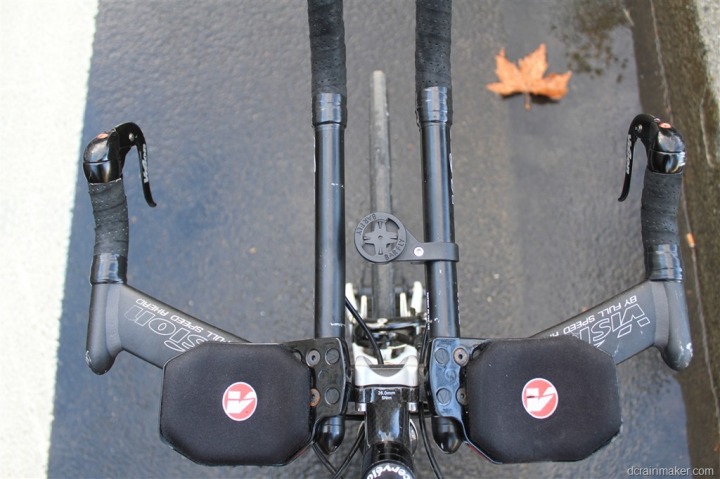 I’ve been using it on my bike since September, and it’s been working great for both units (Edge and Forerunner).  I will note that I’ve had some interesting discussions recently from an engineer in the industry that’s noticed some accuracy discrepancies when various Garmin units have been used in many of the forward mounts (though not this particular mount).  I’m looking to have him put together a bit a guest post on his findings.  Obviously, there are plenty of mounts out in the field, and his scenario is primarily mountain biking.  But nonetheless, it’s interesting.

That said, it’s not something I’d consider a show-stopper yet at this point – I personally haven’t seen much variation between units – and most of my recent rides have had multiple GPS units recording, including at least one always on the mount itself.  In all cases they were within what I’d expect to be normal GPS variance between units.

For example, Sunday’s ride shows only .03 miles difference between the two – well within the GPS margin of error for a one-mile ride, let alone a 21 mile ride – which puts the margin of error at .0025%. 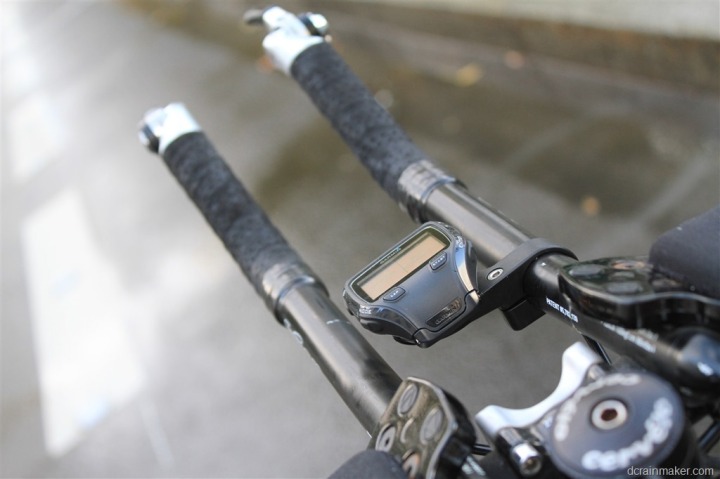 Finally, to demonstrate how this works, I’ve put together this 25 second video showing the addition and removal of both the Edge and Forerunner unit onto the mount.  Makes everything I’ve written make sense in 25 seconds (in the plausible case that it didn’t make sense until this point):

Because we’re ultimately talking about what is essentially a plastic mount with a single screw, I’m not going to make this post any longer than it needs to be.

I do think that these mounts are pricey however – at $20-40 (well, technically $39.99 for TT version and $20 for the road bike version).  Though that does seem to be the going rate for all of the aftermarket/3rd party mounts these days available through normal distribution channels (side markets in Asia aside).  I suspect these companies recognize that if folks are unhappy with the default Garmin mounts (typically for aesthetic reasons), they’re likely willing to spend some cash to remedy the situation.

For me personally, I like the look of this mount on my TT bike, and I like that it’s interoperable with both unit types.  If I had a regular road bike, I’d likely shy away from the mounts and just use the standard rubber adapter – especially given a box of them is only $9 and they’re easy to switch out.  But of course, we all have our personal preferences (and perhaps mine will change in time).

In addition to the TT/Aero model I’ve talked about in this post, they also have a regular Bar Fly 1.1 coming out in the next week or two, which is for road bikes and attaches to your handlebars.  It’s like every other forward mount on the market, except for the all important little 1/8th quarter turn piece that accommodates both the Forerunner and Edge series units.

Also note that Garmin has joined the fray announced a competitive unit back at Interbike, but won’t ship for another 3-5 weeks [Update as of Feb 2013 it is now shipping].  But that product requires you remove a screw each time you want to alternate between Edge and Forerunner.  Given both of these cost $40, it would seem silly to buy the one that requires a loose screw (well, technically you tighten it).  Perhaps this might explain why it’s somehow taken them nearly four months to manufacture a few cents worth of molded plastic…

As for the Bar Fly TT mount, feel free to drop any questions below in the comments and I’d be happy to try and answer them!

Wanna support the site? Or just save some cash?

Hopefully you found this review useful. At the end of the day, I’m an athlete just like you looking for the most detail possible on a new purchase – so my review is written from the standpoint of how I used the product. The reviews generally take a lot of hours to put together, so it’s a fair bit of work (and labor of love). As you probably noticed by looking below, I also take time to answer all the questions posted in the comments – and there’s quite a bit of detail in there as well.

I’ve partnered with Clever Training to offer all DC Rainmaker readers exclusive benefits on all products purchased. You can read more about the benefits of this partnership here. You can pickup the Barfly units through Clever Training using the links below. By doing so, you not only support the site (and all the work I do here) – but you also get to enjoy the significant partnership benefits that are just for DC Rainmaker readers.

If you use the Clever Training links below you get 10% back on everything in your cart with coupon code DCR10BTF.