Before we announce our selection, let’s recap the houses.  After a lot of comparing pros and cons lists, we had narrowed it down to the following three:

House #1: The Eiffel Tower House:
Easily within hitting distance of a baseball from the base of the Eiffel tower.  While this apartment didn’t offer a view of the landmark – it did offer easy access to the surrounding area, and had a clean and bright interior. 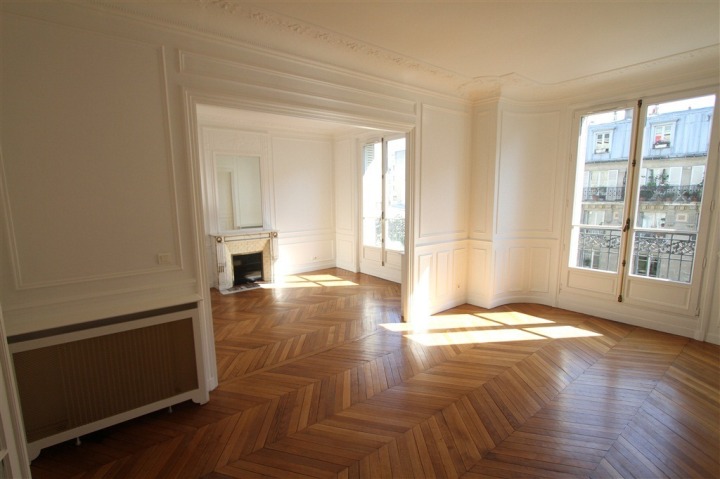 House #2: Notre Dame House:
This house was situated overlooking the Seine (the main river), with a mind-boggling view of Notre Dame.  And while the two-story apartment did feature 2.5 baths and two full bedrooms, it was super-tight on storage space (and space in general). 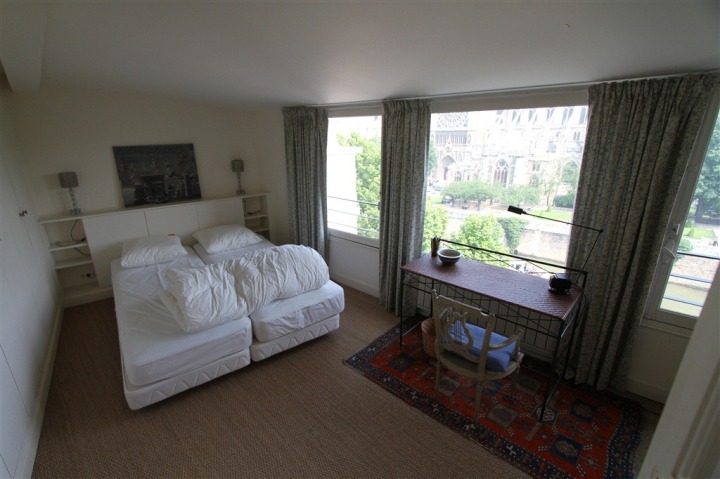 House #3: The Renovated Duplex:
This apartment was a two-story unit with tons of space – the exact opposite of the Notre Dame unit in almost every respect.  It was finishing up major renovations and looked brand new.  However, the neighborhood didn’t have a lot going for it (it wasn’t bad, just not very active). 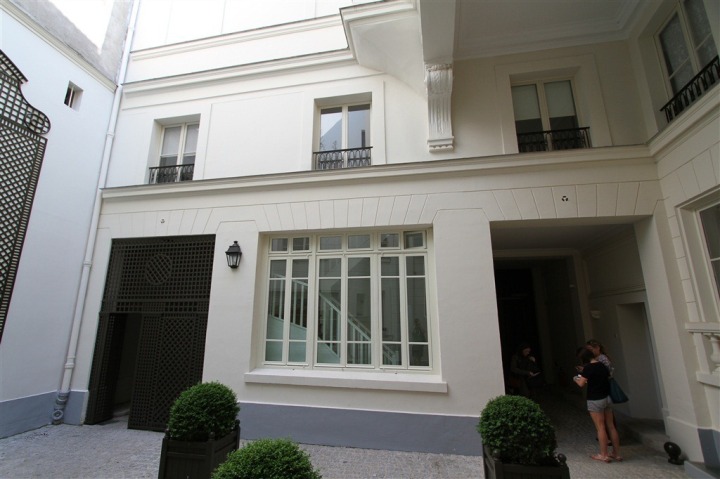 So, which one did we choose as our home for the next 3-5 years? 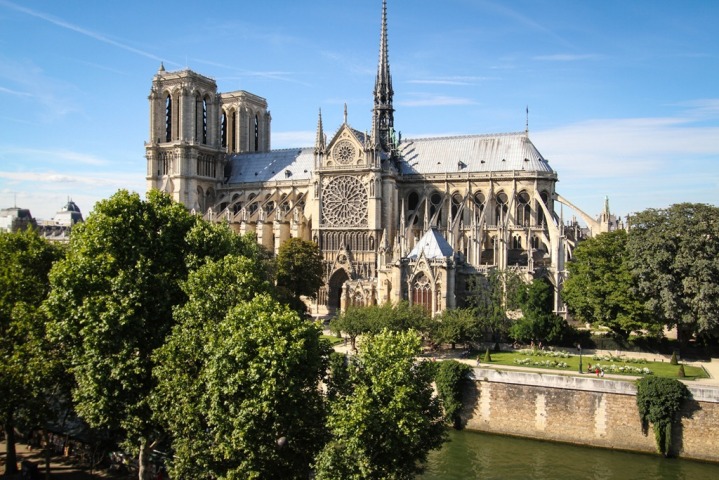 We’ve been pretty surprised that only a handful of folks guessed house #2, and those that did – primarily did so because of some window pattern reflections seen in this post from two weeks ago.  In some ways though, when it came to guessing, you were at a disadvantage for just how spectacular the view is.  The photos make Notre Dame look much smaller and father away, when in reality, when you walk in our front door – it’s all you can see, just towering up.  Everyone involved in our relocation process, from the gas repairman to the movers, simply walks to the window and stares.  Really an unbelievable scene.  Honestly, we’re not entirely sure how we lucked out.

However, what really sold us was the location and neighborhood.  We spent quite a bit of time in all the neighborhoods over the course of our multiple trips back and forth in the spring.  Morning, noon and night – trying to get a feel for them.  And none of them seemed to match the energy.  Sure, some of it is tourists – but once you got away a block or two, it translated into a more natural Paris scene (Saint Germain).

An additional (and extremely important) factor was how long it took to get to the airport.  I’ll be travelling internationally sometimes weekly, and having to change trains multiple times really hurts at 6AM.  In our case, we can get on a single express train about 200 yards away, and I can be at the airport in less than 35 minutes.  It’s awesome.  Oh, and the pool is only a 3 minute walk behind us, which is incredible looking.

Of course, the apartment is small, probably 60% of the space of the renovated duplex (Option #3), if not even smaller.  But as the saying in real estate goes, it’s all about location.  As we moved out of our place in DC, we actually didn’t know which house we’d have.  Thus, we ended up selling virtually every piece of furniture we had (more on that later, The Girl’s Craigslist skills were unreal…I think we almost broke even).  So with the reduced furniture, we got a lot more space.  Of course, make no mistake – we donated, sold and threw away a TON of stuff.  Truckloads of it.

But, we weren’t kidding when we said that trainers were an issue with space. I’m going to tighten up my trainer review process and get the non-reviewed ones out the door quicker.  Because quite frankly, they just take up too much space (and a storage unit here is so darn expensive, trust us…we have one).  Of course, some of the trainers are ones I’ve bought (CompuTrainer’s, Bushido, Kurt Kinetic), and others have longer lead times (PowerBeam pending final software suite). 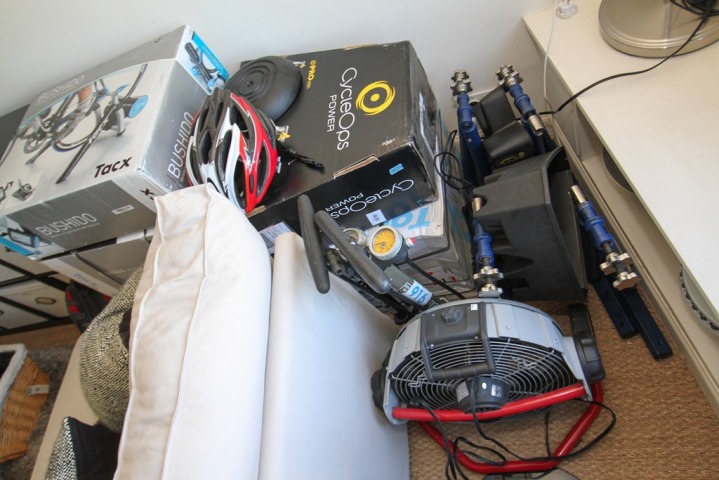 And, our friends and family got the benefit of our book collection downsizing, though – we still kept a lot of the prime titles, which sorta fit into the built-in shelves: 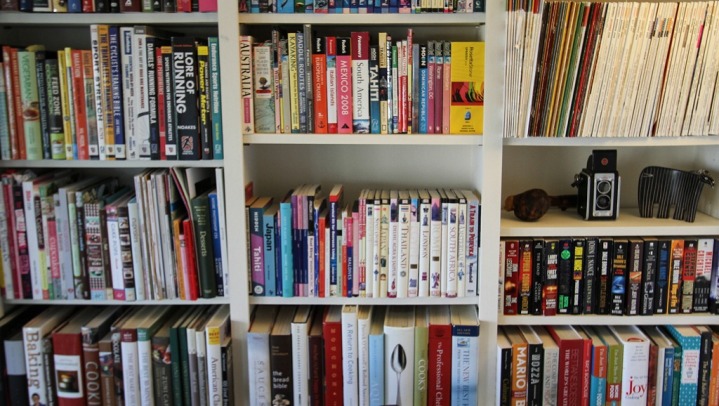 But – thus far with being here a month (which seems crazy!), we absolutely love it.  We couldn’t be happier in our location.  We just got back from a nice walk around the Notre Dame island to grab some crepes, and virtually every night we’re out wandering around – enjoying the stream of street performers around Notre Dame.  Below, a quick photo I just took from where I’m sitting writing this at my desk. 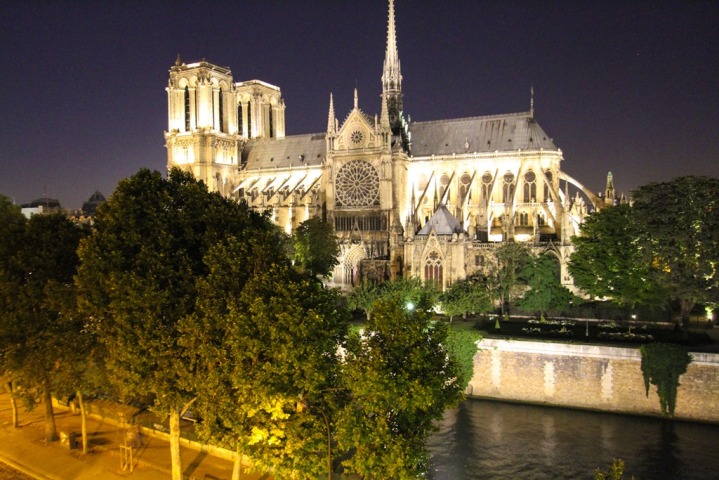 And, after a bit of ‘cleaning’, we’ve started to make the place look a bit better.  Here’s what it looks like after some quality time at Ikea: 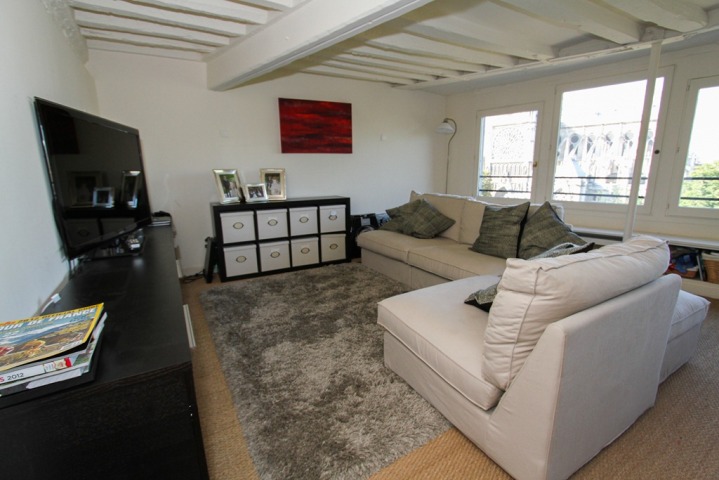 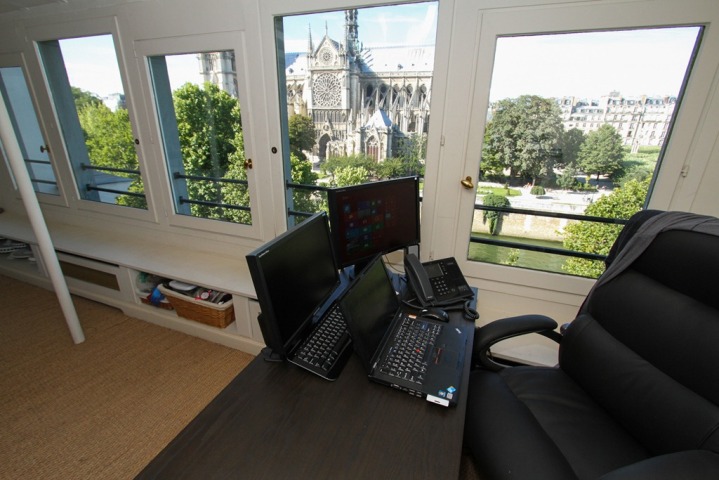 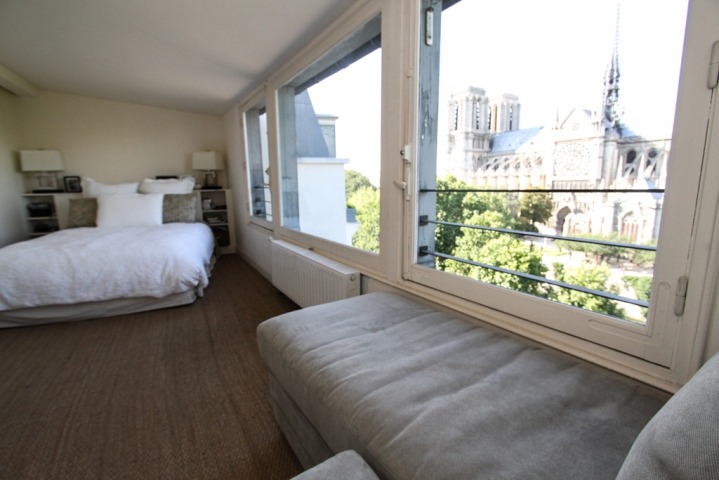 Again, still some work to do, especially in the arts, decoration and bike hanging department – but it’s a start.  Today, our ‘art’ primarily consists of two aerohelmets hung up on a random hook: 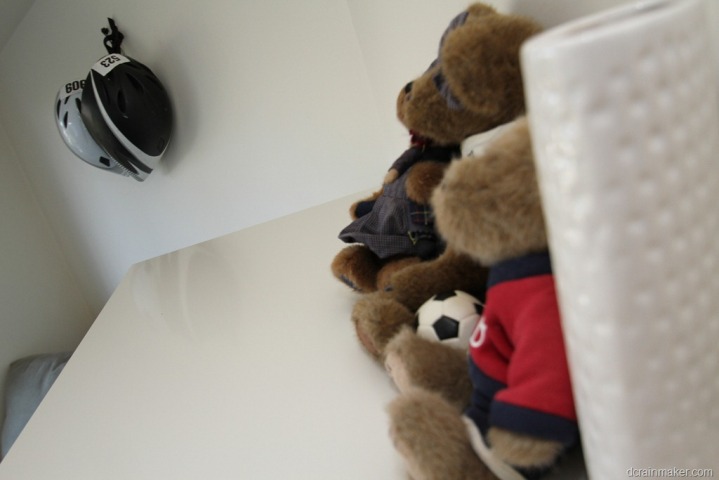 Up next we’ll talk about how exactly you move into a Paris apartment, complete with a crazy time-lapse video of 96 boxes being moved in!  Being on the 5th and 6th floors (top two floors), we lack an elevator beyond the 4th.  They use some techniques unseen in the US – pretty cool and nuts.  Except, you know, when a box falls off from five stories up…but more on that later.

(Update: Here’s the next post in this series, including the timelapse video of moving in!)