(If you’re just joining me, start back at the first part of the two-part series)

While Bora Bora is certainly about sun and sand, we did spend a fair bit of time doing lots of non-beach chair items.  Sometimes for fun, and sometimes (as you’ll see later), out of necessity.

I’ve never been paddle boarding before, but since The Girl was pretty keen to try it – I figured we’d give it a go. 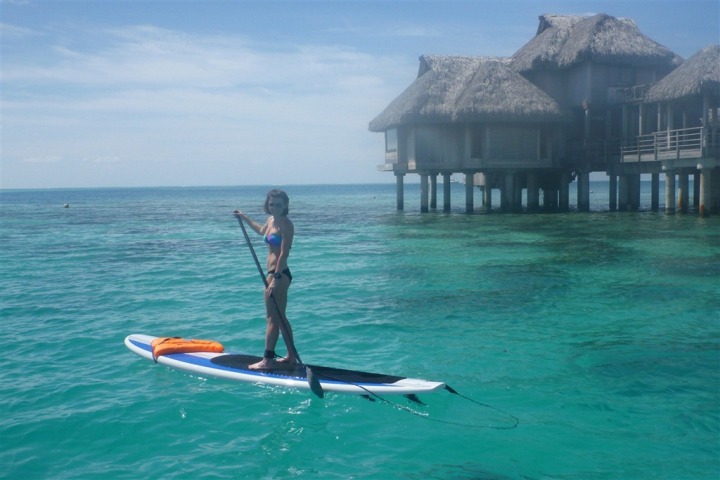 I had initially expected that it’d be like surfing, and that I’d likely spend more time in the water, than on the board.  But to my surprise – I didn’t fall in the water even once!  And that’s over basically two miles of paddling! 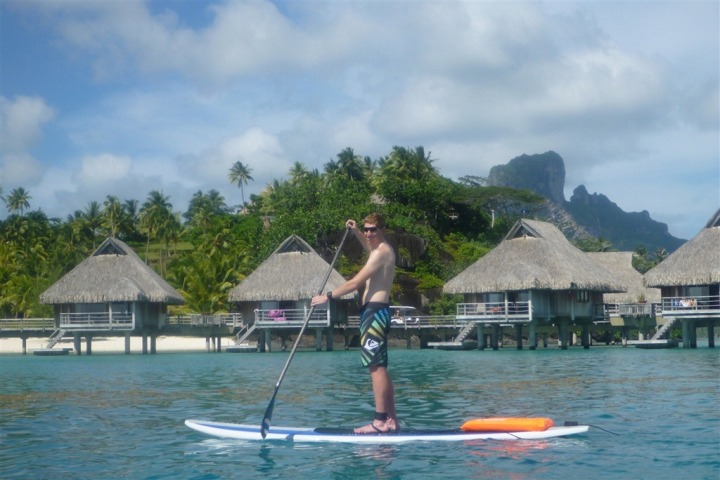 See, even map proof of it! 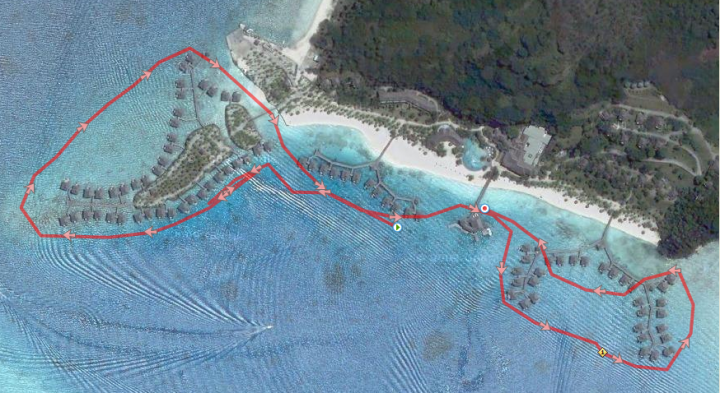 The Girl was getting quite good at it, and really enjoying it!  The first day, I probably could have swam faster, but by the second day – she was definitely out-paddling my swimming capabilities.  But, that worked out, because she accompanied me on my little island swim adventure.  I think that if we lived in a different location, she might end up wanting to be a professional stand-up paddle boarder.

Since I had seen a recent post by Garmin on their blog that they have a professional stand-up paddle boarder, and that there was some mention of stroke count with the FR910XT, I figured I’d see how it worked for us. 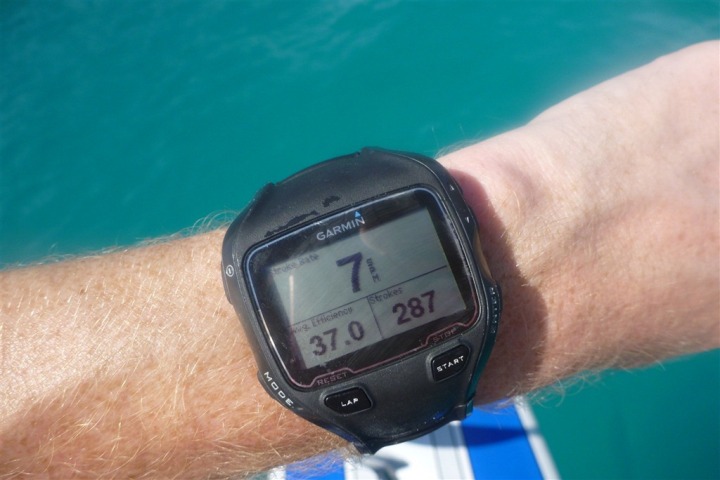 (The top number shown is strokes per minute, lower right is total strokes at that point, and lower left is efficiency – a swimming metric.  As a side note, in case you didn’t see my Saturday note, the FR910XT’s start/started shipping this week.)

And we found out that while the FR910XT does count a fair bit of the strokes, it does seem to miss a fair bit as well.  It’s quite plausible that’s due to our inability to have proper stroke technique, or just simply because the accelerometer in the device isn’t tuned for this particular activity – and thus sees them as false positives.  Either way, figured I’d try for those curious.

The area below our little overwater hut is lit up for night time swimming.  But, in the particular section that our hut is in, the water is actually fairly deep – probably 15-20ft deep (usually most huts are situated over water 2-6’ deep).  Now, for me, I love it – as it gave me all sorts of entertainment swimming down to the bottom and what-not.  But the Girl isn’t as much of a fan, primarily because sometimes the visibility is sometimes limited and she couldn’t see the bottom.  And with lack of seeing the bottom comes fear of sharks.

One night after coming back from a run, we were walking back across the 1/4th of a mile elevated pathway over the water to our hut, when we saw a school of fish come by.  As we were watching these fish float by, we had an unexpected visitor: Mr. Sharky!

Now, the below picture isn’t terribly great – because the top of the water is some 10 feet below us, and the bottom another 10-15 feet below that.  Oh, and it’s night.  And with a flash.  And yes, it probably does look like those Paris Hilton videos I mentioned yesterday.  But the key thing is…it’s still a shark! 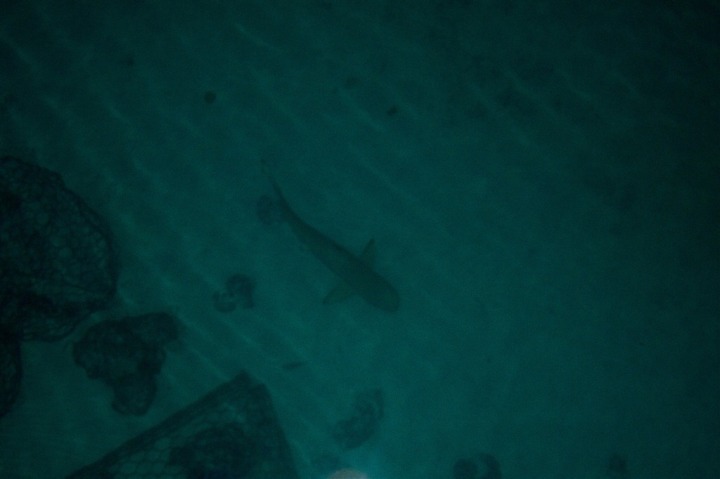 Now, this particular shark was probably only about 3 feet long, so not terribly big.  Further, the only things that wander into the lagoon where the villas are, are black-tipped sharks, which are essentially harmless.  But, this certainly didn’t help my case with The Girl that the water was perfectly safe.  Oh well, I still enjoyed it!

After seeing our shark, the weather has somewhat deteriorated over the past few days.  And by deteriorated, I mean…poured. 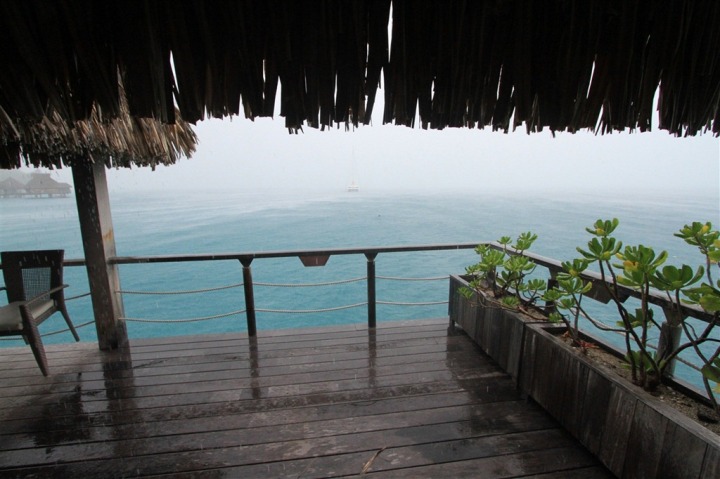 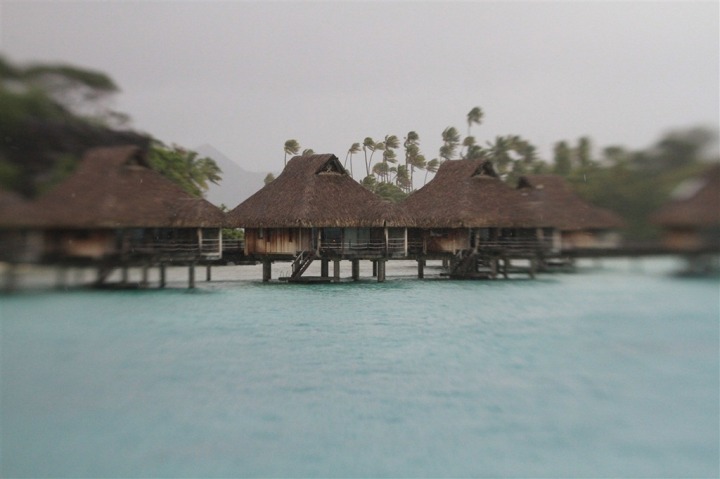 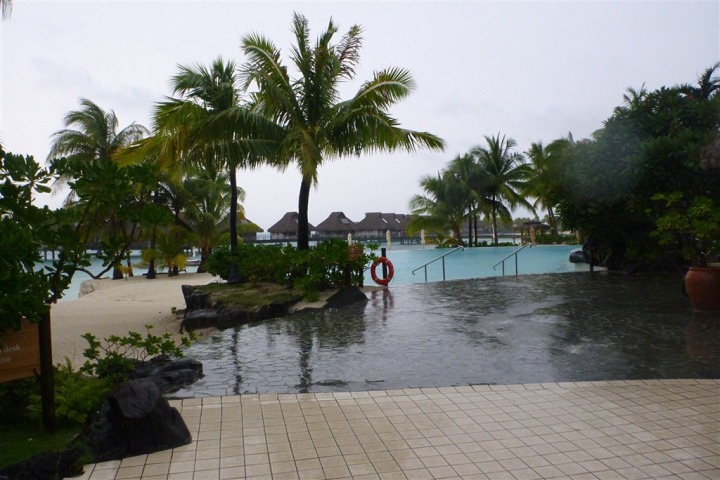 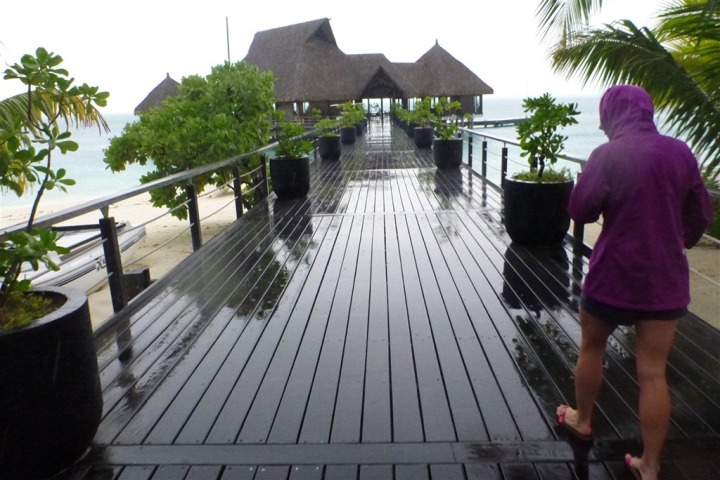 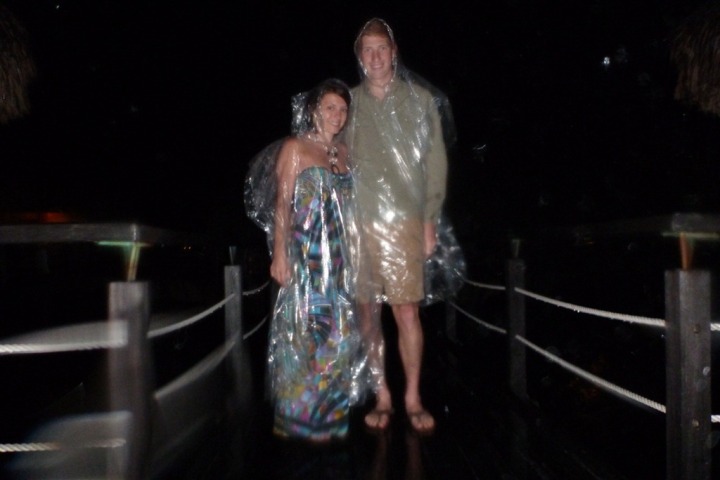 This has left us with lots of time to do alternative things beyond just sitting in the sun.  For example,  we went diving.  One of the most famous dive sites in Bora Bora is where Manta Rays tend to congregate.  Manta Rays are different from Sting Rays – in that Manta Rays are normally ginormous, and look like huge airplanes flying gracefully through the water.  You may remember some night shots of them from the Maldives that I had.

Given that most dives to this location will end up sighting 5-8 Manta Rays, I was pretty excited to check them out.  So we loaded up onto the boat, and then bounced our way through a tropical storm to the dive site – on the other side of the island.  Oh, that’s our driver below.  And yes, he has a eskimo style hat on. 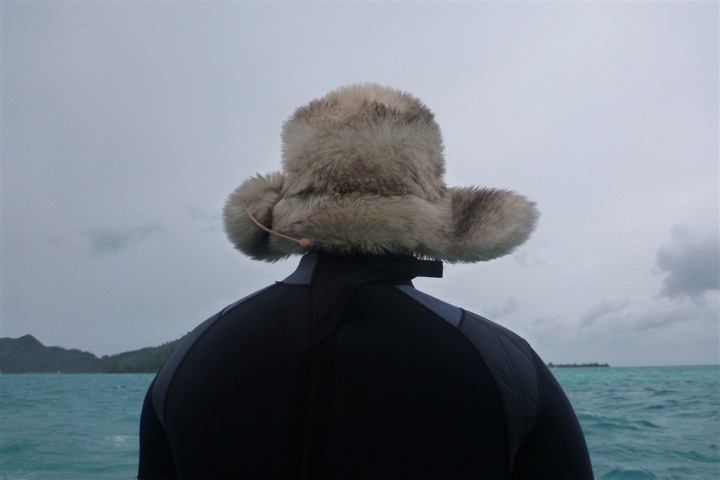 Once there, we geared up and plopped on it.  The water towards the surface wasn’t crystal clear like normal, no doubt a resultant of the storm – but it was certainly friendlier than being above the water level in the rain. 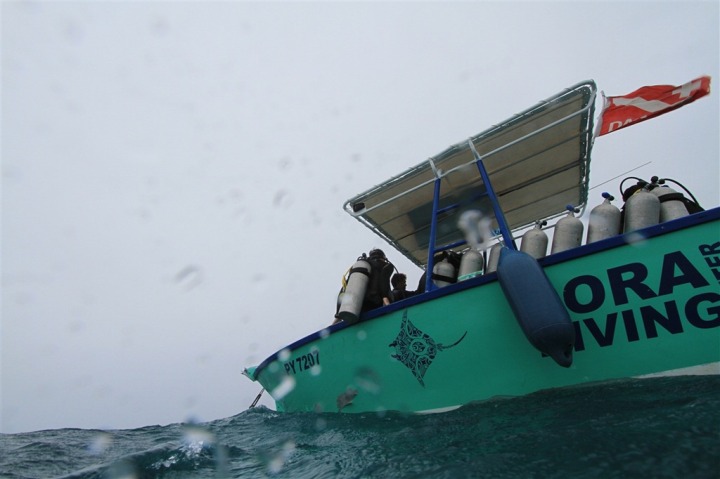 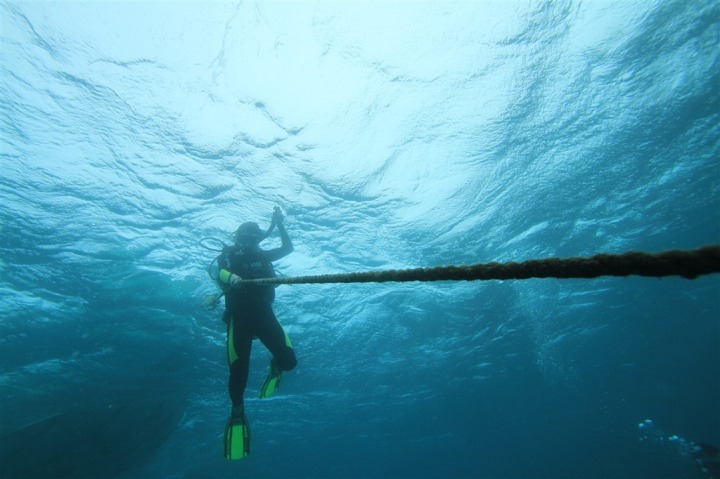 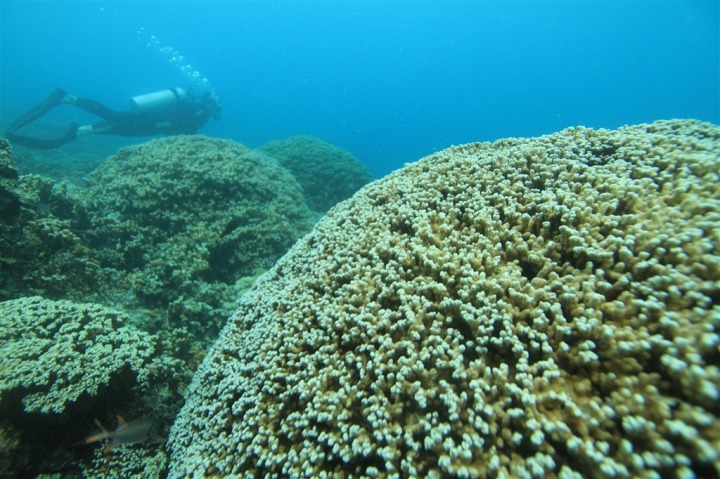 After about 5-7 minutes underwater, we got our first manta ray sighting – though, in water with not terribly great visibility.  You can see our dive master pointing it out. 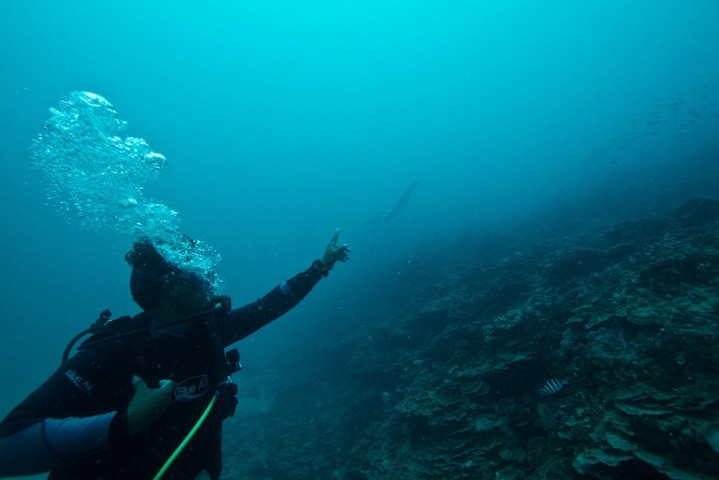 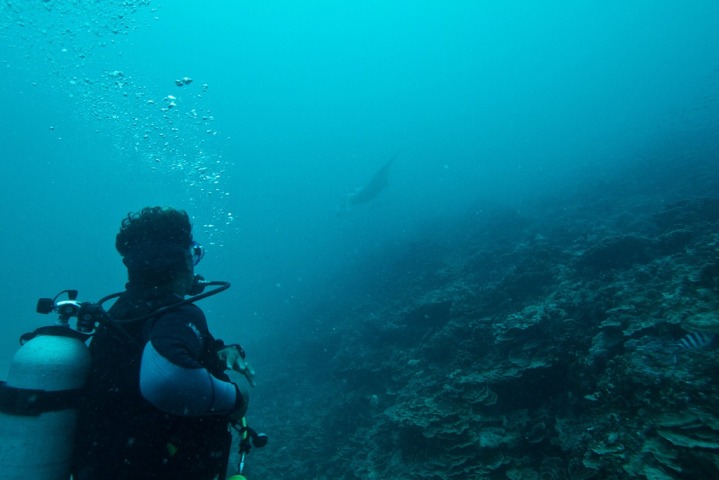 Regrettably, as you can see, it didn’t swoop much closer, making the photos hard to understand.  So, with the help of zooming, black and white, and everything else I could throw at it, I present our Manta Ray: 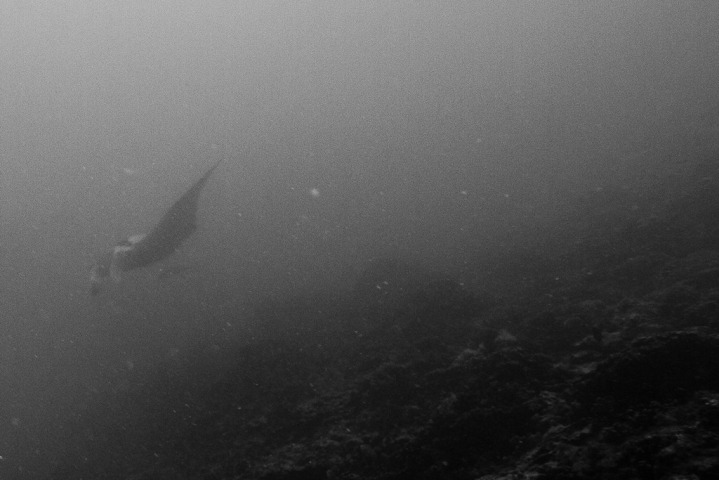 And by ‘first sighting’, I should clarify that to mean ‘first and last’.  Yup, after that brief and not-so-close look at them, we spent the vast majority of the rest of the diving just checking out coral and fish.  Oh well, can’t win ‘em all.

You know what’s great about the Internet these days?  Downloading movies for a rainy day.  While the connection there wasn’t fast (a typical movie download took 4-6 hours) – it did eventually come down.  So we spent some of the three rainy days catching up on various movies.  I was happy I had packed the overpriced Apple iPad/iPhone HDMI converter attachment, along with an HDMI cable (super cheap as long as you don’t purchase at Best Buy) – allowing me to hook directly into their TV: 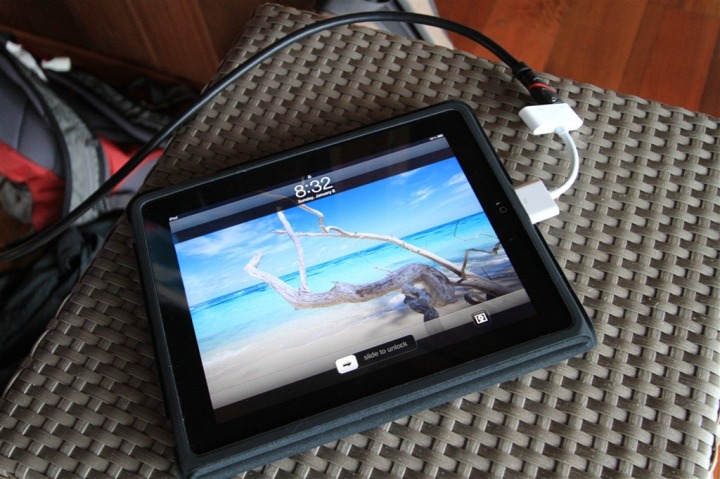 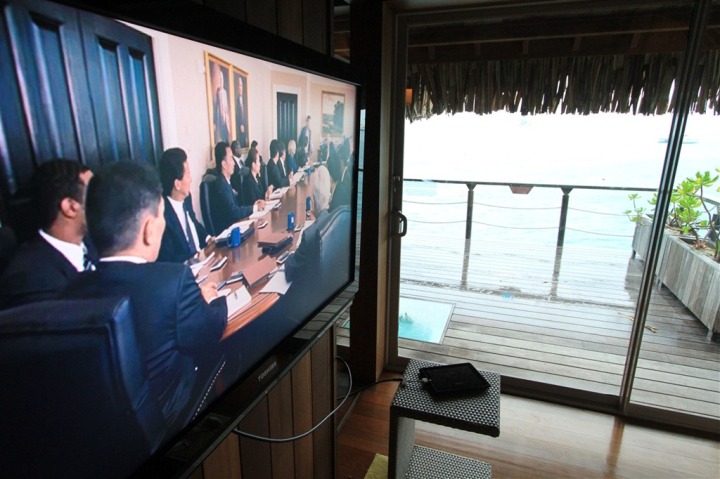 Woohoo!  Otherwise, it was DVD rentals from the hotel’s selection that consisted of Kung Fu Panda and Zoolander.

And, while the rain kept away the beach chairs – it didn’t keep away my streak of swimming.  I swam at least 500y openwater every day, sometimes up to about 2,400y.  Despite the pouring – and I mean really pouring – rain: 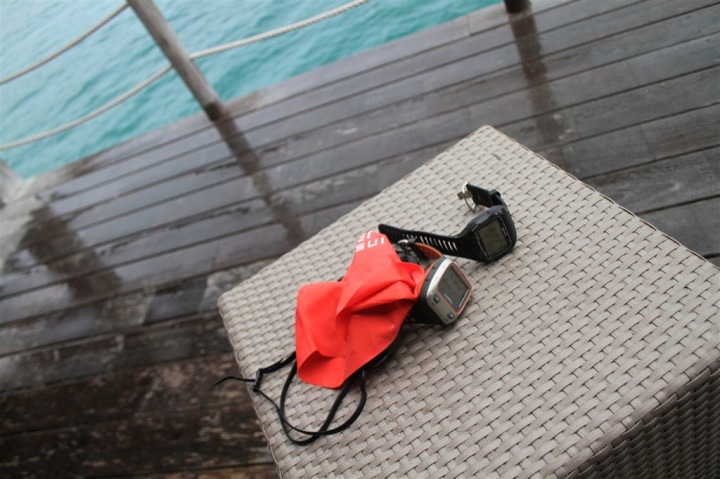 These are actually two different days – they just simply look about as gloomy as each other.

So with that, we’ve started to work our way back home to the US.  Though, not without a stop first in Auckland for half a dozen hours, then San Francisco, and then another 24ish hour stop in Vegas for CES (where I’m moderating a panel).  Gonna be a blurry next few days!  Onwards!

And, for those longing for more in depth sports science type posts, fear not – tomorrow I’ve got a cool one that I think you’ll enjoy!