A couple of weeks ago I had a few minutes while a pot of water was heating up for pasta, so I figured I’d spend maybe 15 minutes cleaning up the travel page and getting a few of my more recent trips added to it.  Add a few categories and just paste the rest of the trips there.  Simple enough, right?

Uhh…apparently not.  Turns out there’s over 115 trip posts!  Eek!

Over an hour later I was still slaving away trying to get everything on the page (and now I’m already three trips behind!).  And then I decided to make it pretty.  That’s never good, because I have no graphic artist skills, so even drawing a smiley face using MSPAINT requires extensive time.  But, once I was done I actually had a pretty sweet looking page – sorted by both world geographies and trips. 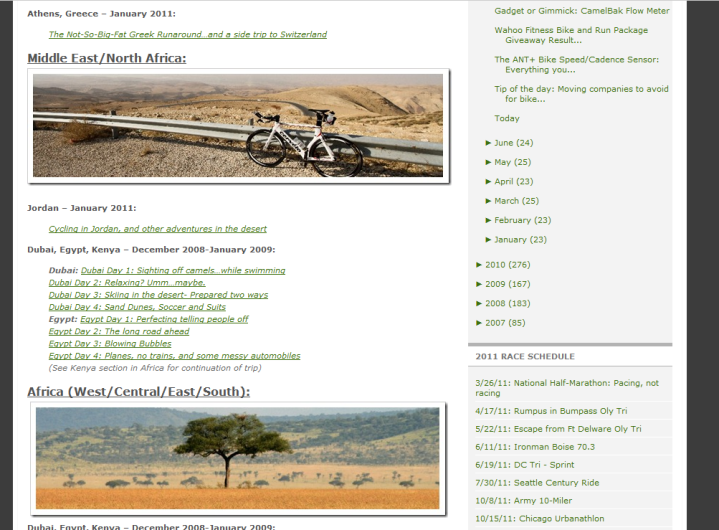 But what really blew me away was really just how much I travel.  From my perspective I don’t think about it much anymore.  I get on planes, from one city to the next, all without too much thought.  After over a decade of doing it, it’s simply because a way of life.  Yet when I sat down and actually listed out all the trips from just the past 2 years or so, it’s mind boggling how many places I’ve been…and how many hilarious or interesting stories are behind it all.  I’m sure decades from now my kids will stumble on some of these trip pages and find endless entertainment…but in the meantime – I give that opportunity to you.

While I was sifting through trying to find all my trips and adding links I had forgotten about some of my most memorable trips.  These were either for pure hilarity purposes or just because they were really cool and interesting.  So here’s 10 fun trips to waste away any productivity you may have had going this morning at work:

Remember the saying ‘Do as I say, not as I do?’ – well, this particular post about accidentally swimming onto a trash covered beach (no, really, up to a foot thick) and into a police compound in a foreign country probably takes the cake.  Note that this side of DR isn’t exactly the nice beaches that you imagine from the northern side of the island.

Swimming into a policed compound…in a foreign country

2) Cycling in Jordan & Swimming in the Dead Sea

This was hands down probably one of my most popular travel related posts.  If cycling into the relentless desert being chased by angry farm dogs and swimming with a rubber floaty toy in the dead sea wearing tri gear is your thing…then you’ll probably really enjoy this.  Oh…and I end up finishing on top of a eggplant truck with a non-English speaking native.

Cycling in Jordan, and other adventures in the desert

Eager to get my swim workouts in, I turned to just about the only public pool in Nairobi…one that while designed for swim competitions years ago – hardly reflects that now.  Fear not, it’s not like I’d stand out or anything as the school kids swarmed the pool for an escape from the heat.

4) Skiing down sand dunes in the United Arab Emirates

It’s no secret I love to ski, but that doesn’t have to be limited to snow.  Nope, not at all.  During this trip my brother and I strap on some boards and hit up the sand dunes.  I’m reasonably certain I’m still finding sand in unhappy dark places years later.

Sometimes it’s just a single place that you find in a city that blows you away.  If you’ve never seen the pinnacle of bike shops – you’ve gotta check this place out.  Regardless about how you feel about Lance, his bike shop is pretty damn cool.

During my first visit up north to the home of The Girl I become quiet close with The Moose.  Far closer than I wanted to be.  And likely in a few Moose’s opinions – far closer than they wanted to be either.  Enjoy!

7) Cycling around the tip of South Africa

There are few places on this earth cooler than the southern coast of South Africa – amazing terrain, friendly people, and incredible cycling.  Join along as I hit the pavement for a tour of some of the most famous places in Africa.  Fear not, lions don’t generally attack – but as I found out, the ostriches and monkeys can.

I’m almost always training while I’m travelling, usually for running races and/or triathlons.  But sometimes you’ve gotta mix things up a bit when you have limited options.  Here The Girl and I go to town recreating a triathlon.  There’s 10’ long pools, volcano’s and elephants…all in the Bali countryside.  That’s still three sports, right?

A prelude to a Bali Triathlon

If you’ve never been to India, it’s hard to describe the variations in geographies, towns and people.  And animals.  So many animals.  But I got the chance to go for a 10-mile run with some locals through all of it, complete with dodging cows, pigs, goats.  All while enjoying sunrise and temples across the fog laden valleys.

There’s no place in the world like Jellyfish lake (or Palau for that matter).  You’ve likely seen it on the National Geographic Channel.  This is the lake filled with billions of jellyfish that you can swim in just like the ball pit at McDonalds.  Here my brother and I take a dive into it, complete with amazing video of the pulsing jellyfish.

Enjoy your Friday, the upcoming weekend, and thanks for reading!  And good luck to all those competing in either Ironman Canada or Louisville…and remember to enjoy the day.