After coming back a day ahead of schedule (we were cruisin’!) from our kayak camping trip, we got persuaded into going back out in the kayaks for another day (although after a good nights sleep in a real bed). It’s pretty much a requirement to hit up Jellyfish Lake when in Palau, and we were working with the folks at the dive shop (Sam’s Dive Shop) to get it to all fit in. That was when they came up with the idea to combine a half-day kayak trip down an inland lake called ‘Long Lake’ (about a mile or so long), with some snorkeling and the famed Jellyfish Lake. The plan was to take a speedboat to Jellyfish lake, then afterwards swing by a deserted beach for lunch, and then go for a few hour kayak journey. We jumped at the opportunity.

We set off early on a speedboat to Jellyfish Lake, which is an inland lake on an island. The lake is isolated from any direct ocean water contact to the sea, but it’s maintained it’s salt water status via the porous rock in the lake’s walls. Many years ago some jellyfish got into the lake. There is considerable debate over how it happened – but the two opinions are either the larvae seeped through underwater cracks/pores, or some nearby birds picked up the larvae and dropped it in the lake. Either way, over time they adapted to the new environment, which lacked any real natural predators. In doing so, they lost their stinging tentacles – making them nothing more than a bowl full of jelly. Without any natural predators their population bloomed exponentially. Interestingly, about 15 or so years ago in a El Nino year, the lake actually overheated so much it killed off every single jellyfish. However, through an incredibly complex process that I cannot remember, the jellies eggs can remain dormant on the bottom of lake for a long time. The population was able to completely replenish itself in a matter of months. Just a couple million Jellyfish, give or take a few.

This lake was made ‘popular’ in the mid/late nineties with a cover feature on National Geographic. Since then it’s been featured in numerous movies, TV shows (i.e. Survivor), and documentaries. Now in the peak season some 300 visitors a day visit the lake to snorkel and see the jellies (and pay the steep $35 park entrance fee).

With all of that background complete, it’s time to get to the action! When we first got into the water we didn’t see any jellies immediately. The jellies follow the sun, and fear the shade. For the shade brings their only natural enemy in the lake – sea enemies that cling to the walls in the darker areas. But as you swim out into the lake you see an occasional jelly floating by.

At first your natural reaction is to avoid them – as that’s what you’ve always been taught. When you bump into one for the first few times, your body instinctively reflexes away from it – fearing oncoming pain. 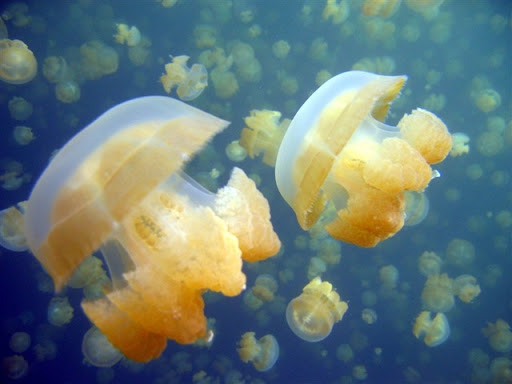 However as you go further into the lake, the jelly population gets denser and denser, until you can do nothing but bump into them. They feel very much like Jello – just sliding around and bouncy when you touch them. You don’t feel any pain or any irritation from contact with them.

They are all constantly pulsing, as that is how they move. It’s rather surreal to watch – and even more so to float in the middle of it all. With all that said, here’s a few photos I took. I think the next one is probably my favorite out of all of them. (Favorite photo that is…I don’t have a favorite jellyfish) 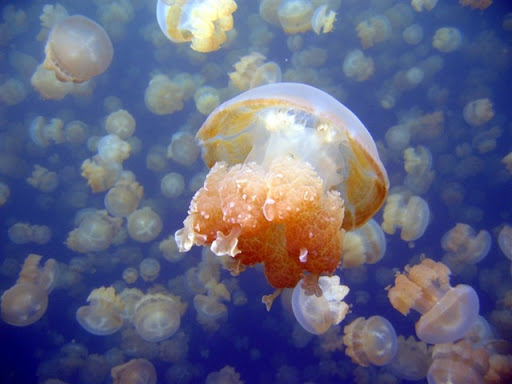 I got my brother to take one of me, diving down into the jelly abyss. 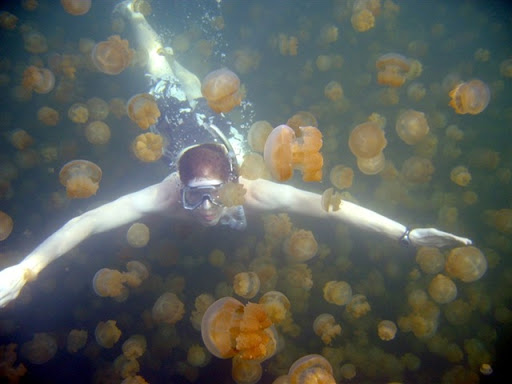 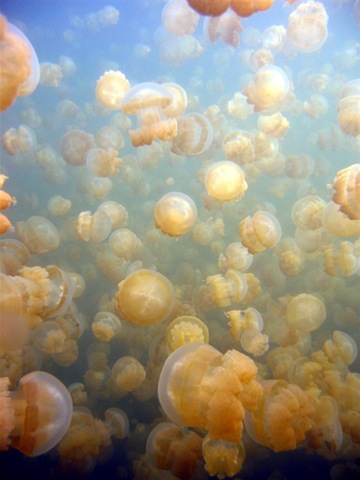 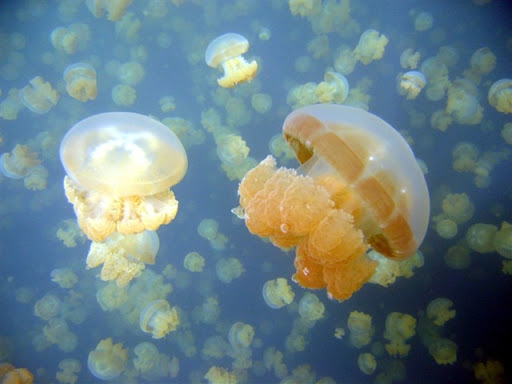 The below photos is taken when they were at the densest point that I swam into. Apparently they can get so dense that you can’t even move. 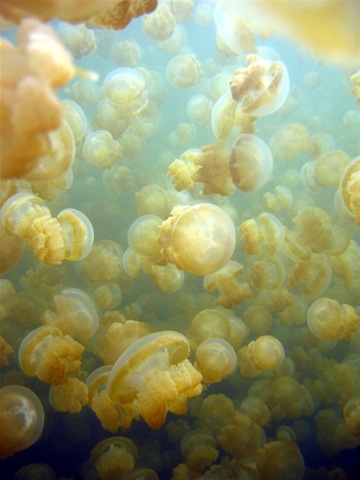 And lastly, here’s a short video clip I took of the pulsing action and what it looks like underwater:

I could show you the kayaking photos from the remainder of the day and talk about paddling through deep mangroves – but really…they aren’t as cool as above. So I’ll just keep it to one simple photo I took of my kayak later in the day. Yes, the water really is that crystal clear turquoise color. 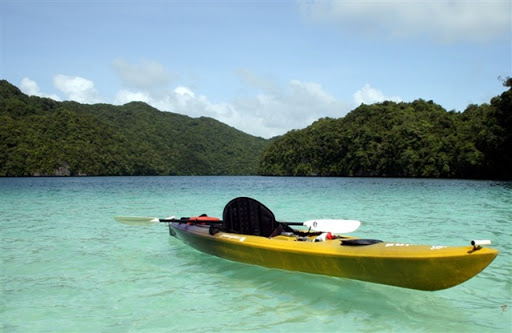 And tomorrow (or whenever I post next) – we’ve got some serious aerial adventure action. Sweet!