(If you’re just joining me, check out day one first)

We got an early start due to being up before sunrise. We tooled around our beach area a bit, basically just wasting time. After a breakfast consisting of Pop Tarts, Chicken Noodle Soup and Banana Bread, we packed everything up and prepared to set sail. We didn’t want to leave too early because we were trying to wait for the sun to rise a bit (yes, it appeared to be finally sunny!). Our first item of the day was only a short 15-20 minute paddle away, and if we got there too early we’d be floating around waiting for the sun to get above the coral.

Here’s a shot of our beach on departure that morning. To put some scale to things, the sandy part you see is about a hundred yards long, and then it extends another few hundred yards to the right, but mixed up with some more rocks. 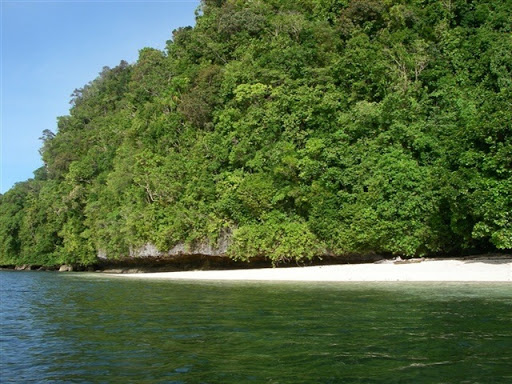 From there we paddled to a place called Risong bay, which is a big bay, with a slew of smaller attached lakes/little bays. Very cool for just wandering around and doing some amazing snorkeling. From the map below, we started at Blue Devil Beach, and then hit up the green dot (a shipwreck). It was cool, but the photos didn’t turn out too well because of the depth. After that we worked our way around clockwise through the bay, hitting up all of the smaller inland lakes – including some that required a quick hike. 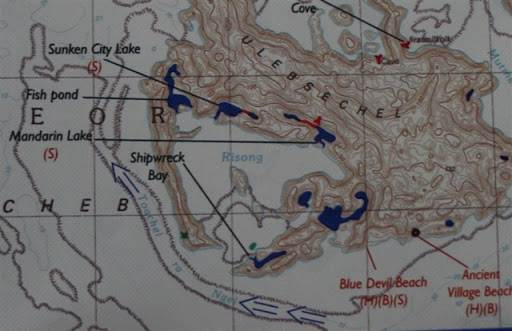 Here’s a photo just inside the entrance of Risong Bay, at the entrance to Shipwreck Bay. We were going to try and get up on that rock and take a few awesome photos, but it proved a bit more challenging that we anticipated. 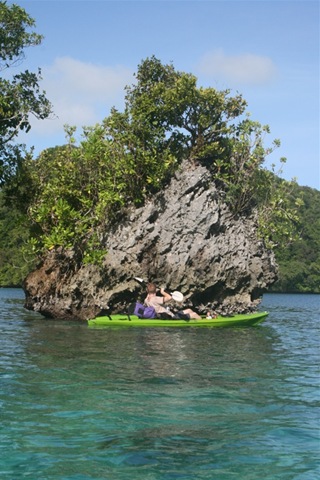 The below photo is in Mandarin Lake, where there was quite a bit of shallow water snorkeling above some pretty cool coral. I managed to get the underwater camera just at the waterline and take this shot of our kayaks chillin’ in the background. 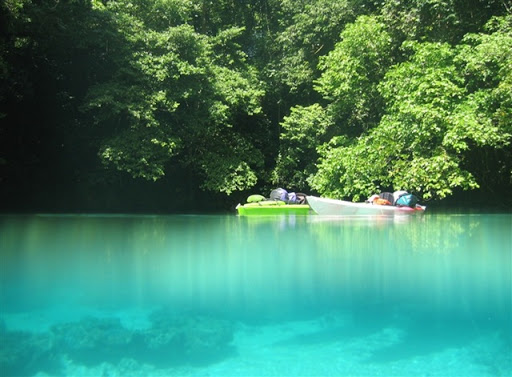 After our leisurely mid-morning wander and snorkel through Risong Bay it was time to tackle the first beast of the day. The crossing of Teongel Channel. This three mile stretch was in essentially unprotected waters with nasty surf, heavy winds and heavy currents. And no pit stops once we started. Here’s a shot of it from the air (on a calm day) – we had to cross from the green land on the far right, to the little island in the lower left hand corner. Long. Ass. Way. 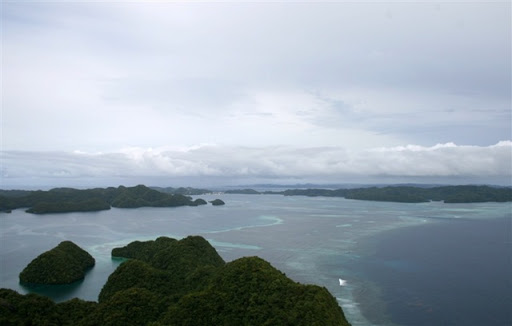 The motivational factor in getting across the channel was lunch. Simple as that. We actually made darn good time across the channel, about an hour in total of bobbing around in the surf and paddling hard. Very solid workout.

We planned to have lunch at some old Japanese docks, which was where the upcoming Survivor’s Tribal Council was held. Although you’d never know it from visiting it. Given the hard to get to location the area is rarely visited. There’s a trail from the docks (which are located out of view in the lower left portion in the above photo) that starts at the water and extends up some 600 feet in elevation to a lighthouse at the top of a hill. Along that trail there are dozens of WWII relics, mostly Japanese. It was a hugely fortified position, protecting the whole bay (pictured above).

We decided to delay lunch and instead hike up to the top while the weather was still good. Took about 25 minutes to get up, here’s a few of the things we saw along the way.

These were just up the trail a bit, note the large shell on the ground just behind my brother’s left shoulder (his left). 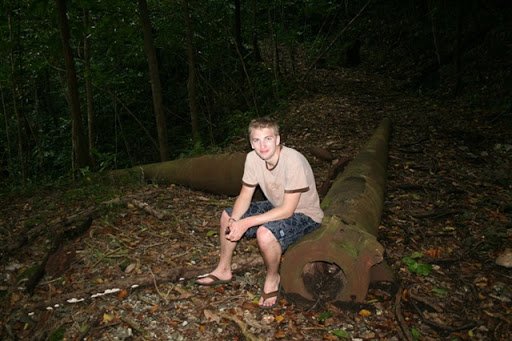 Caves are EVERYWHERE in Palau. The Japanese were prolific cave builders during WWII. Here’s a relatively short – but brilliantly designed one. It went in and formed a “T”, allowing one to escape any incoming fire behind 20 feet of limestone. 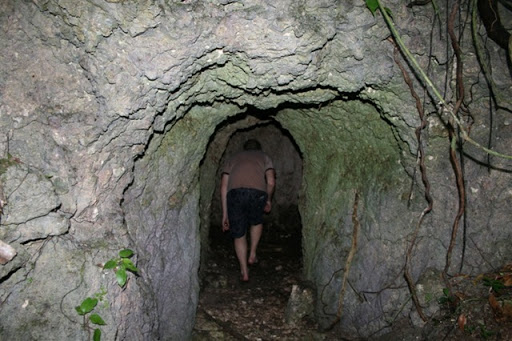 Nearing the top of the mountain there was an area protected on all four sides by mountain, and also was conveniently flat. This served as a base camp, with remnants of buildings and bunkers all around. Below is the officers pool. 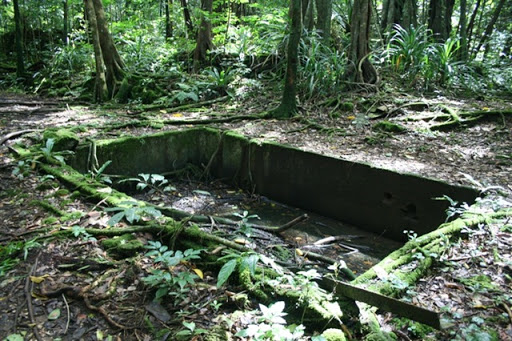 At the top, now overgrown, a large guns poke through the brush. One of the unique things about Palau is that nearly no work has been done to ‘restore’ the WWII items. They’re just left to be found ‘as is’ by future generations. It was a refreshing change compared to the plastic and overprotected feeling WWII sites found elsewhere around the world. You’d wander around here and find empty shells just at random, or perhaps a canteen or grenade sitting in the brush. There is so little tourist traffic here to the sites that you don’t have to worry about it being wrecked. 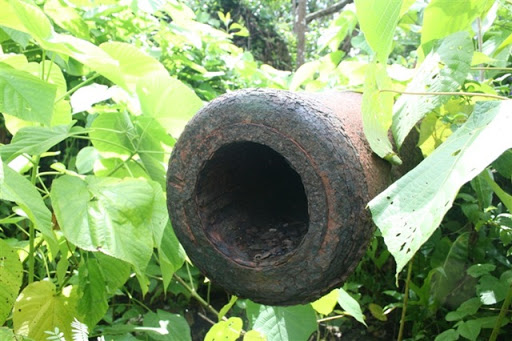 After we were finished checking out the top we started back down the mountain. It was then that we caught the tell-tale signs of badness. First the light rustling of the jungle leaves. Then the whipping wind heard above. Then a couple droplets of water. And then downpour. Yes Palau – we get the point – you like to rain.

We decided to skip lunch and instead down a few more pop-tarts and call it good. We had decided early that morning that we could accomplish the rest of our itinerary (including the next day) by the end of the day, allowing us more time to do other stuff the next day. So we had a pretty tight timeline that required us to make one more very lengthy paddle, double the distance of our channel crossing. This one would take at a minimum 2 hours and include all unprotected areas as well as another channel crossing. Did I mention that it was dumping out? Ahh…want photographic proof you say? Check out the below video we took right before plopping in the Kayaks and heading right into that mess. Ummm..yeah.

So off we went straight into the mess. After about 45 minutes the rain stopped, and then another 45 minutes later the wind let up. As we made our final channel crossing the sun decided to grace us with it’s presence. Here’s a couple shots with about 15-20 minutes to go on our journey. My brother is celebrating the appearance of the sun. 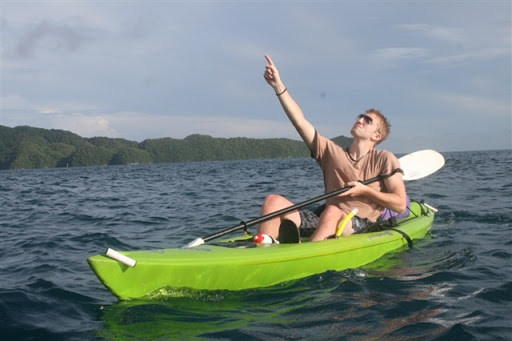 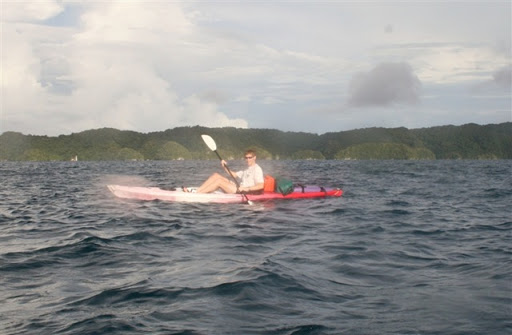 We arrived into the shop around 5PM, just before it got dark out. But what about that third day you were supposed to be out there you say? Ahh… we had plans. Grand plans! Actually, the guide dude made up the grand plans – which rocked! The next day we’d instead spend kayaking, snorkeling and swimming down some of the coolest inland lakes you’ve seen. And – one of the pinnacles of the trip – Jellyfish Lake. Oh…it was AWESOME! But that will wait until tomorrow. Speaking of awesome, the day after Jellyfish lake was perhaps even more incredible. I won’t say what we did yet, but there’s a clue somewhere in this post.