Kayaking Day 1: For the love of all raindrops holy, please stop raining!

That’s it – I’m changing my blog name, blogger ID and everything else associated with ‘rainmaker’. Clearly it was omen. But…let’s back up a second first.

So we set out this morning (well, three days ago – but you’re going to get them in order, one day at a time) for a three day kayak adventure. A self guided and somewhat self-planned journey through Palau’s Rock Islands. The planned route would have us getting underway early Wednesday morning and returning Friday evening. We’d camp on beaches as we saw fit, and then during the day we’d make forward progress to our destinations via numerous small bays, coves, coral gardens and hikes. Basically whenever we saw something interesting we’d stop and check it out. Here’s a Virtual Earth satellite image of the area, with our day one route in red. I’m having issues getting my GPS file off the device and onto the computer, so I had to use the little red pen instead (you’ll probably have to click on it to see the red line). 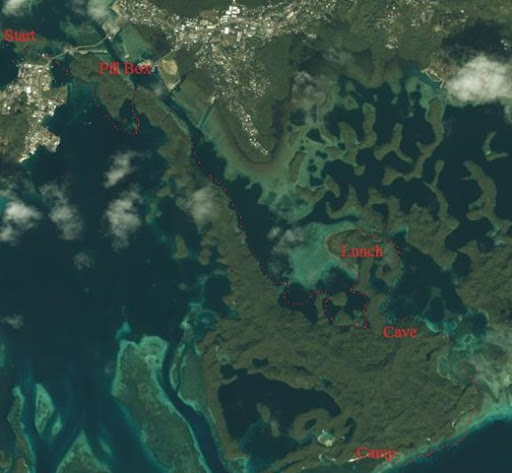 We geared up and grocery shopped early Wednesday morning and ‘set paddle’ by around 9:30AM or so. The skies were typical for a morning in Palau – overcast with fresh rain just having fallen. Signs of clouds breaking were off in the distances. Nothing to worry about.

Here’s a photo of our ‘push off’, with our route planner dude dropping us in. 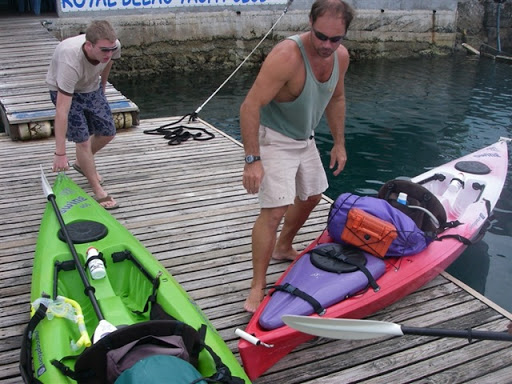 We paddled for about 45 minutes until we got to one of our first interesting things – a channel lined with WWII Japanese Pill Boxes. These were where machine gunners would station themselves along channels or other advantageous locations. You find them littered all around Palau. They are occasionally very hard to spot, and when you’re inside of them you can really see how much territory they can cover from a logistics perspective. 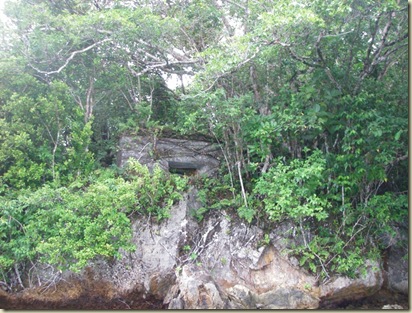 (Above: Looking at it from inside the channel) 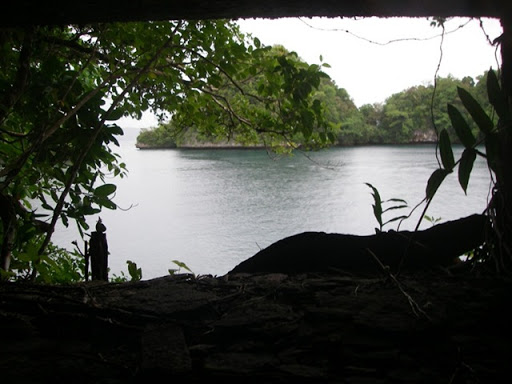 (The view from inside the pill box)

After the pill box, it was time for a long 90 minute or so paddle down to our lunch stop located at an old Japanese WWII dock and cave. On the way down it started to sprinkle. Then it started to rain. Then it started to pour. Then it started to do whatever it does after it pours. That would be the point in which I believe there is more water in the sky than air. And then it didn’t stop…ever. Here’s a photo of us after we made lunch (in a dry cave) and hiked up to the top of a mountain. It was an incredible view, but would have been stunning (due to the coral gardens in the bay below) had it not been raining. 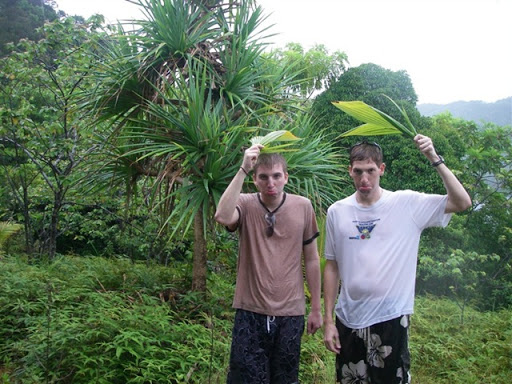 After we visited an inland lake during our mountain climb we headed back down to the kayaks to being a solid slog towards open water. Along the way we stopped here and there to check out various things. One of the more notable ones was a huge cave (appropriately called Cathedral Cavern). It was cool for two reasons. First it was big, and more importantly – it was dry. It became uncool however when we looked up at the ceiling with the camera flash and noticed a gazillion bats. We left like a bat out of hell at that point (pun intended). Here’s a photo of us exiting the cave. 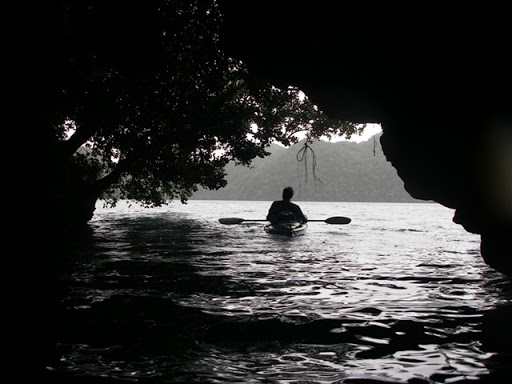 From there we had to battle it out into open ocean with a pretty significant surf. Once out along the cliffs we got to choose between three beaches where we’d end up camping. We made like swift arrival parties and checked out each beach for a few minutes. We settled on a place called ‘Blue Devil Beach’ due to a bunch of blue fishes that hang out in front of the beach (technically Blue Devil Fish). Some of the beaches here also have small shelters built near the beach set back in the jungle a bit, great for days like this when the sky is dumping. Total kayaked mileage at this point – about 14.5 miles.

We got settled on shore (below the shelter) and setup tents. From there we had some serious time to waste since it was only around 4PM. So my brother tried spear-fishing with a stick. He didn’t catch anything…or really see any fish worth catching. We did see a shark patrolling our section of the beach shortly thereafter (trademark fin sticking out of the water). We then tried catching small-medium sized crabs on the beach. They are fast. Very fast. We couldn’t catch any.

We decided to work on something a bit slower moving. A coconut. While I was pondering how to climb up the tree, my brother came along and just whacked the thing with a stick. Coconut success! (I had a video I was going to upload of this coconut little adventure, but the internet is so painfully slow here that I’m going to fall asleep before it finishes).

Following all of that, I had a moment to write something out in the sand – it seemed appropriate given the day thus far. If you aren’t familiar with HTFU – Youtube is your friend. 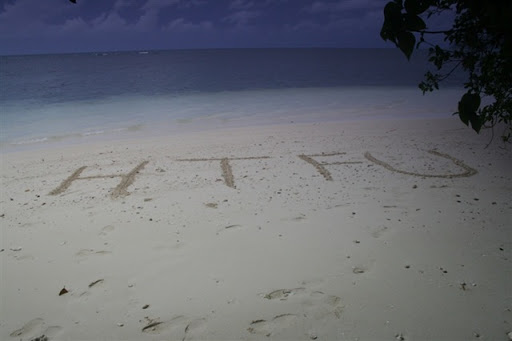 After my sand script, it was time for dinner and and sleep. Actually before sleep we did catch a million small hermit crabs. We didn’t do anything with them other than put them in a container and watch them try and escape up a small stick. They’re very intelligent little creatures. It’s also a great way to pass the time. Don’t worry, no animals were harmed in the making of this adventure. For those less brilliant hermit crabs who couldn’t escape, we let them go later on.

As for sleeping – it was a rough night. For some reason we couldn’t find our sleeping mats (they were wedged deep in the kayak apparently), and thus we were sleeping on rock hard surface without anything more than a shirt below us – combined with howling winds and torrential rain. Btw, rain sounds even louder in the jungle than just being outside. We did actually wake up randomly at 2AM and went outside to check out the sky. It had cleared and there was spectacular stars outside. Very cool!

A number of hours later we woke up (well, woke up sounds as if we actually got any sleep…) to a nice little sunrise. A sign of things to come? Just maybe… 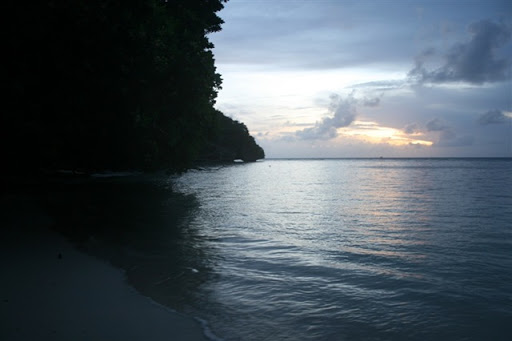