DCRainmaker.com posts this past week:
A wide variety of posts this week covering quite a range of stuff. Here’s what made the main stage:

Tuesday: A look at the 2011 NYC Urbanathlon Obstacles
Thursday: Are you running the Urbanathlon with a friend-

Note that I post over there roughly every Tuesday and Thursday, and Sarah posts on Monday and Wednesday. It’s a tag-team event.

Slowtwitch.com Weekly Sports Gadget Mailbag this week:
This week I cover the following topics over at Slowtwitch as part of the mailbag series. You can check out the details over here:

You can read all my past weekly mailbags at Slowtwitch here. Or the pre-Slowtwitch days here.

1) Self Inflating Bike Tire: A look at a project that’s trying to build funding that would ensure that your bike tires stay aloft.

2) Denver investigating bidding for 2022 winter games: Would be interesting to see it come back to North America in the next decade…assuming the USOC and IOC can work out some of their other differences.

4) English Channel Crossing Story. A while back I shared the website of woman who was training to swim the English Channel.  On Saturday she successfully completed the 28 mile crossing from England to France in 11 and a half hours and become the first woman from the great state of Michigan ever to do so. (Thanks David Woodruff for sending)

5) Check out this bike rack out that an avid bicyclist had made for his motorcycle.  Think of something like the Mavic Neutral Aid crews that follow the Tour de France.  Fabricated using a Yakima parts and custom rack, and made in Utah. 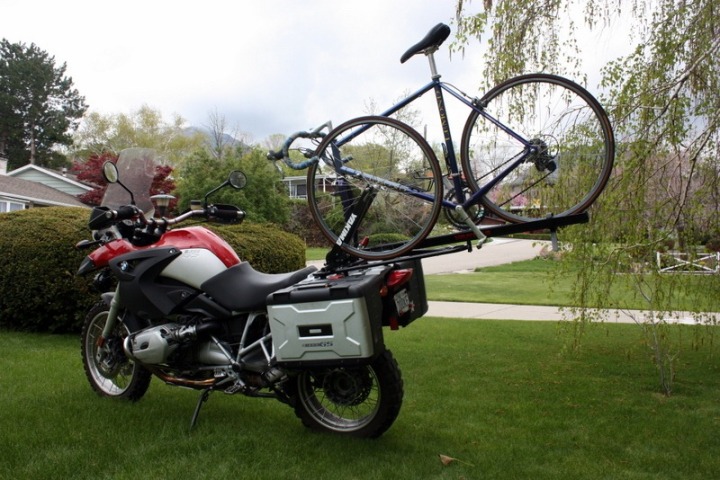 6) Triathlon Racing Park: The video below captures the proposed concept in an undisclosed location (like Dick Cheney, except more exciting).  And at the link you can take a survey about it and learn a bit more. Whether the concept is fiscally possible I believe will depend on how much they can leverage the facility for other non-triathlon purposes. I think there are plenty of other sports that could take advantage of such an area, especially with both careful scheduling and well planned marketing. (via this thread on Slowtwitch)

REI has Garmin FR210 on sale down to $189 – including the HR strap.  This is about $50 off normal for that package.  BUT!!!! If you already have an older Garmin unit, you can get another $50 off by trading it in, bringing it down to $140 using the rebate offer that ends on Aug 31st. I love the FR210 because it’s a great all around running watch (not a great tri watch though). If you don’t need the super advanced features of the FR610 (or similar), you can’t go wrong. I’ve said before that I think it meets the needs of 90-95% runners.  And, as always, if you use that nifty link up there, you’ll support the site.  But, if you’re like me and more impatient, you can actually just go to your local REI and pick it up in person. Enjoy!

Polar RCX5 Webinar Tuesday:
If you’ve got a question for the Polar team about the RCX5, or just have general questions about their goods – they’re holding a live Webinar Tuesday morning.  From what I’ve heard – the last one they held was rather informative for all involved. Here’s all the details:

There’s a full thread on Slowtwitch about it, in case you have any questions about it.  Essentially though you just connect to that link above, and then you can enter as a guest. Free of course.