The weekend started out rather calm – with a nice Friday evening swim at the outdoor pool.  I had ordered a slew of different underwater MP3 players over the past few weeks, and for reasons unknown to me they all seemed to arrive on Friday.  So I got all my unboxing photos taken care of (for eventual reviews and a shootout) and then hooked up both The Girl and I with music for our long swim. 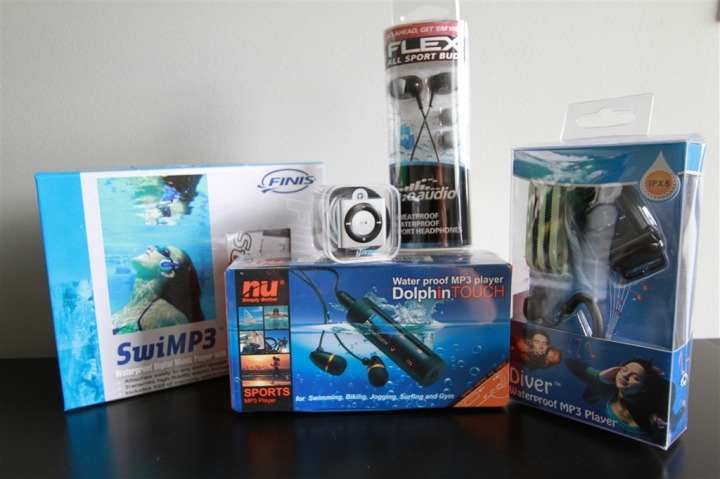 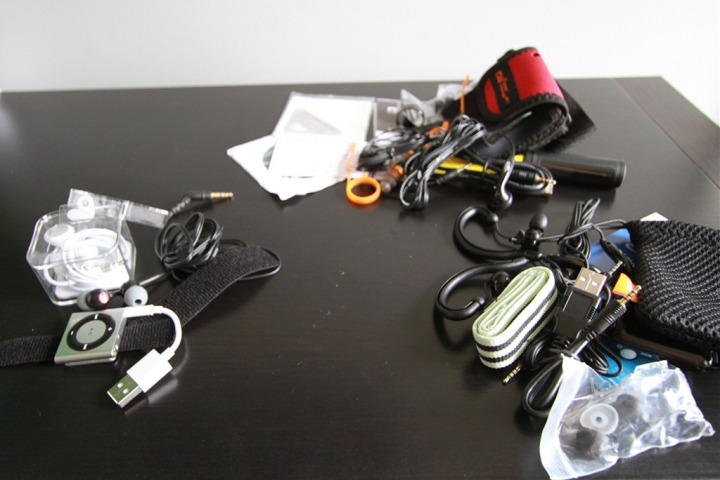 For myself I went with the WaterFi internally waterproofed iPod Shuffle MP3 player.  This one is actually a stock iPod that’s been completely taken apart and waterproofed. Pretty crazy. 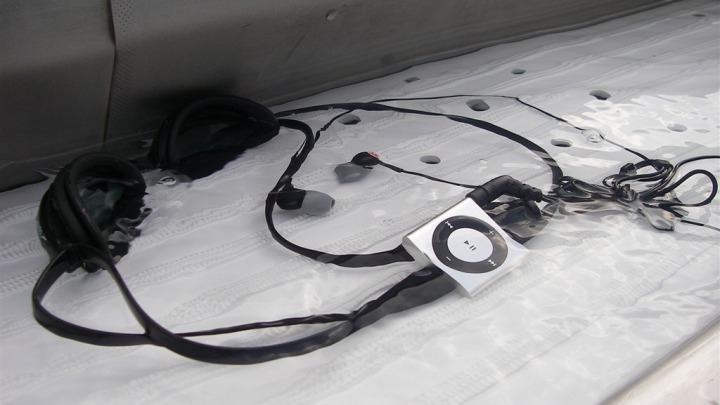 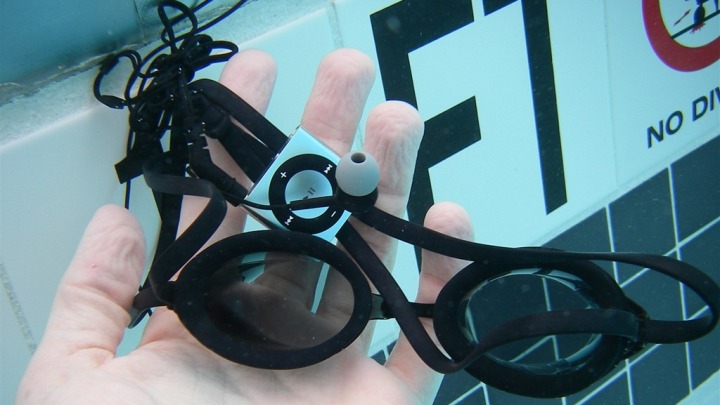 The Girl meanwhile selected the Diver MP3 player.  Though I didn’t grab any photos of it in the water during the swim. I’ll be suckering my friend Bruce into doing a photo shoot this week, like the last one we did a few weeks ago. 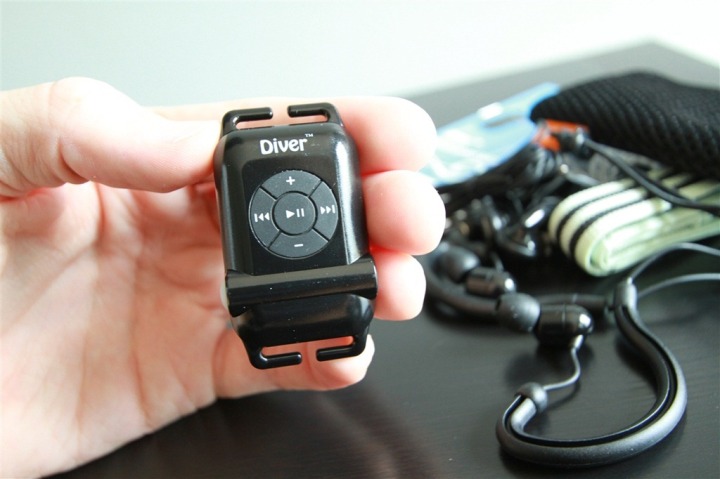 Unlike the previous FINIS SwiMP3 player we’ve been using (that does jawbone audio conduction), these both utilize headphones.  I picked up the headphones that each manufacturer recommended and/or was packaged with their product.

Our general impressions of both products after the initial use on Friday is that while they both deliver superior quality audio compared to the SwiMP3, they both are a pain in the butt in that they either occasionally come out of your ears, or that they get water inside the earpiece – causing a muted volume. Next time I’ll try different ear buds (it came with a number of them) – but if folks have any suggestions for my Monday evening swim – I’m all ears!

The goal for Saturday was to knock out the long run early in the morning before Hurricane Irene made a mess.  So we met up with the Pacers Running folks at 7AM at Gravelly point and then headed off into the district.  A few of us ended up with a slightly different route than the main group (which was following the Marine Corps Marathon route this week) in that we wanted flatter land versus the hillier first portion of that course.

After swinging around the Tidal Basin we made a very brief stop/walk through the new Martin Luther King Memorial that was planned to be unveiled this past Sunday – but that celebration was cancelled due to the impending weather.  Nonetheless, we took about 60 seconds to walk across it and check it out. In looking back at the below picture, you can see the less than ideal skies starting to take shape. 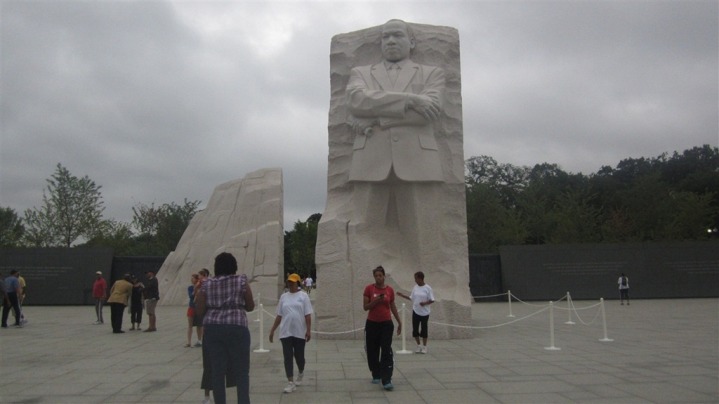 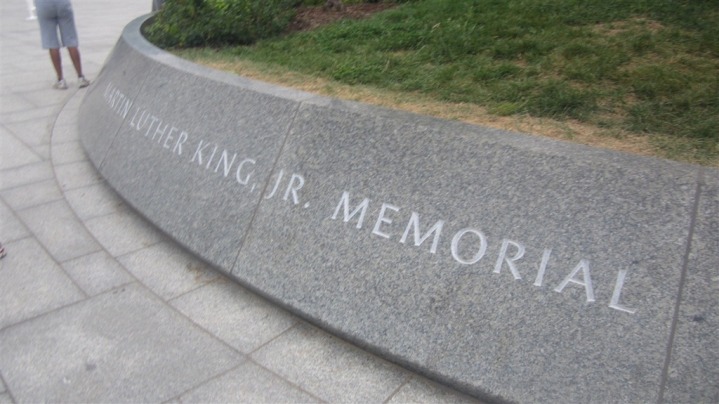 It’s actually much more impressive in person than most of the photos/TV clippings you see make it out to be (including mine). And it was about the only monument in DC that had anyone at all at it Saturday morning.  In fact, everyone commented that the touristy areas of DC were completely deserted of both tourists as well as regular traffic. Kinda eerie. Well, except the CNN truck doing their live shoot out in front of the Capitol.

The run itself didn’t exactly go to well, I was still feeling the effects from Thursday night’s tough mile-repeat session and then the added humidity was the icing on top.  Ironically, as the day went on, the humidity actually dropped. Go figure.

After completing the run the remainder of my day was simply dedicated to watching random TV shows (it’s totally not my fault that the Parking Wars show on A&E is so addicting if you stumble on it while channel surfing).  And in the time that I wasn’t watching TV, I was looking at our windows checking out what Hurricane Irene was up to: 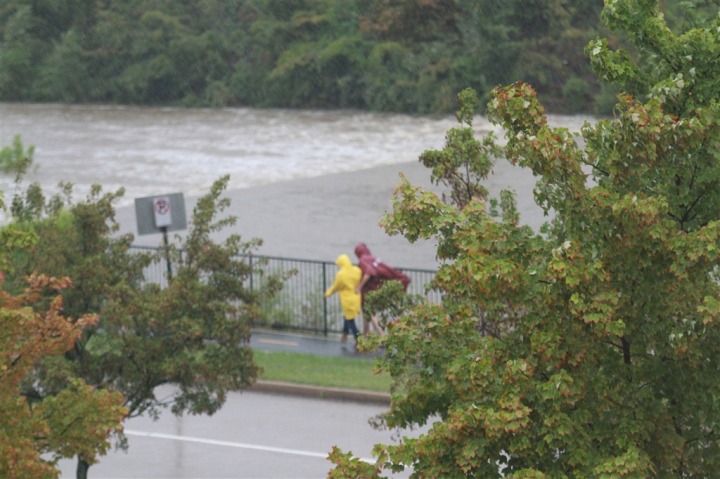 It was interesting watching the water gauge (both height and flow) for the river across the street.  Normally the river flows at about 6-7 cubic feet per second (CFS).  However, last night it peaked at over 2,300 CFS – crazy!

Luckily however, they dredged the river a couple years ago after it came within about a foot of breaking the banks in front of my place and visiting my bike trainer room – so now the massive surges aren’t a problem. Then it peaked at over 17,000 CFS and flooded out over 160 homes just down the street from me. Obviously I still pay for the FEMA flood insurance anyway…just in case!

The good news is that the sun came out again on Sunday and there was no damage to our home from the hurricane (well, ok, two tomato plants did get decapitated). For those curious about the earthquake that hit us earlier in the week, we did have a quite a few taller bookshelves completely empty out – including one with aero helmets on top of it.  We did find some of The Girl’s cake stands had been broken – but nothing significant in the grand scheme of things.

And with the sun coming out I was able to finally get around to un-packaging the Garmin solar charging system I bought back a few months ago before the wedding.  This can be used to charge various Garmin Edge and some Forerunner devices. 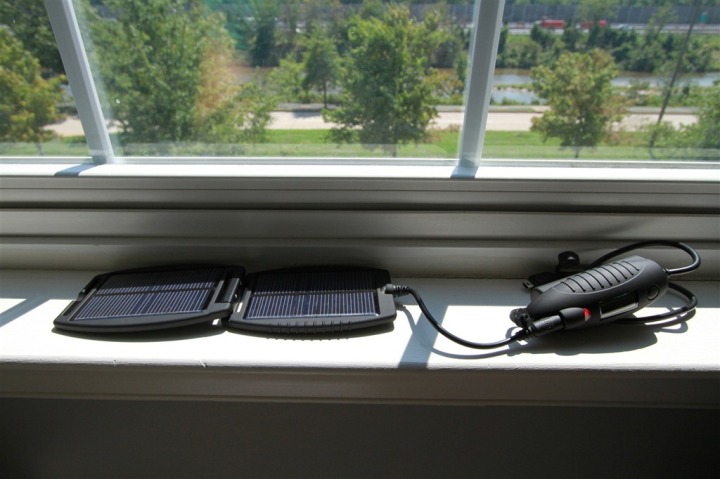 It’s actually made by Powermonkey and rebranded as a Garmin device.  Look for some sort of post in the future about it.  Maybe not a full on review, but something talking about how to extend the battery life of your devices for those doing longer events – and including both this option as well as some of my more tried and true ones.

Hope everyone else stayed safe this weekend, and congrats to those who raced up at Ironman Canada or down in Louisville.  Have a great week ahead!