With my work completed yesterday (Thursday), I had the morning in Delhi to do as I saw fit before my flight later this afternoon.  I initially thought I might go do some touristy stuff, but after it was found out I’m a ‘runner’ by some local co-workers, I was offered to join in on their weekly long run.  Given I was just here two weeks ago – I pretty much covered most of the Delhi tourist things anyway.

Because today (Friday) is actually a holiday in India, these folks had it off – making for a perfect opportunity to get in a nice early morning run.  Thus, my ‘pickup’ at 6:15AM this morning.

A driver was sent to grab me at my hotel in the early morning darkness.  From there he’d pickup my co-worker, before dropping us a bit out of town near a few other peoples place.  At which point, we’d run from there.  It should be noted that in Delhi, a ‘driver’ only costs about $10 for 4 hours – no matter where ya want to go or how long you stay.

However, that didn’t mean that the car ride by myself to an unknown destination with an unknown (but friendly) person in the dark early morning fog/smog/smoke/something wasn’t a bit…strange. 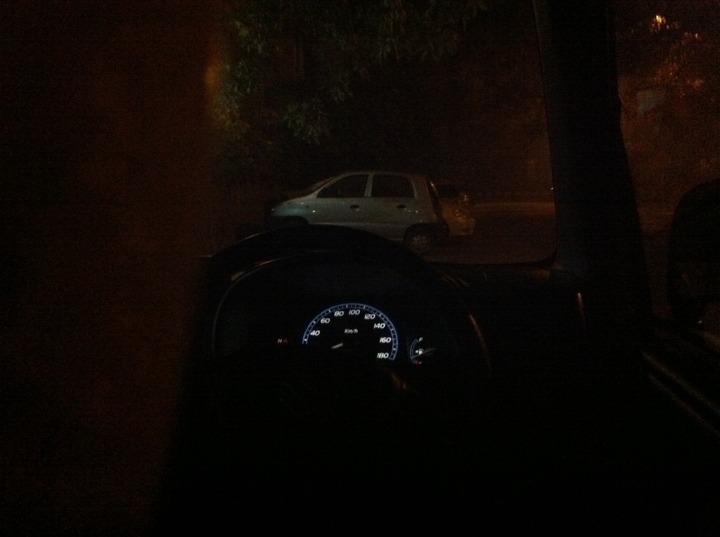 After stashing our stuff, it was off onto the open road we went.  This initial part was on a fairly quiet road that is lined by farm-houses behind large stone walls. 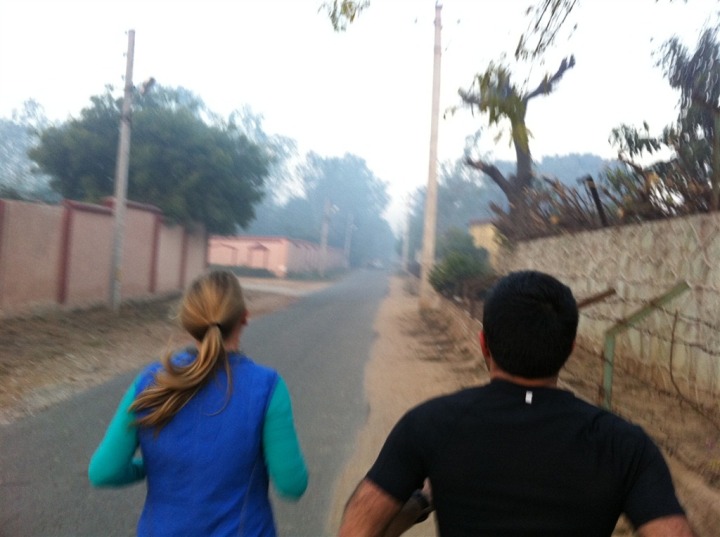 After about 2 miles on the road we departed into the brush.  This was a rambling dirt road/trail through one of the few undeveloped areas left in Delhi.  My hosts noted it would likely be only a couple years until this area would be covered with buildings. 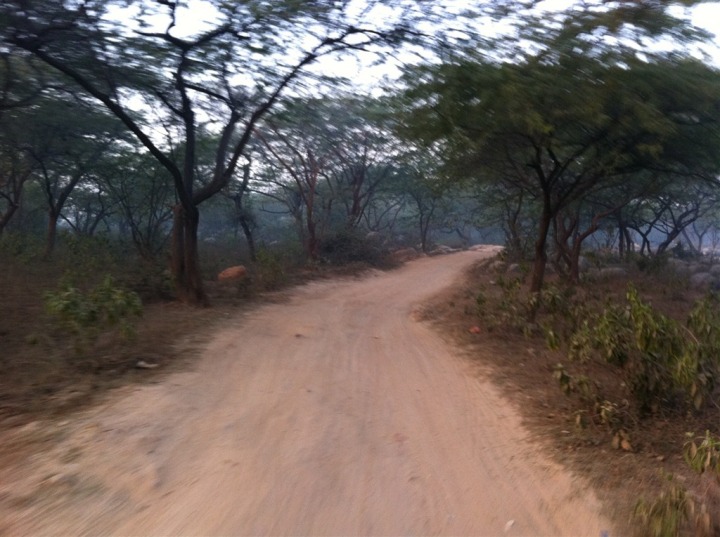 As the sun started to break down the morning fog we broke out into a clearing overlooking a ravine – and eventually a temple off in the distance.  Pretty amazing view.  All I had was my cell phone camera for the run – but wish I had something nicer.  You can see it about center-photo, off in the distance. 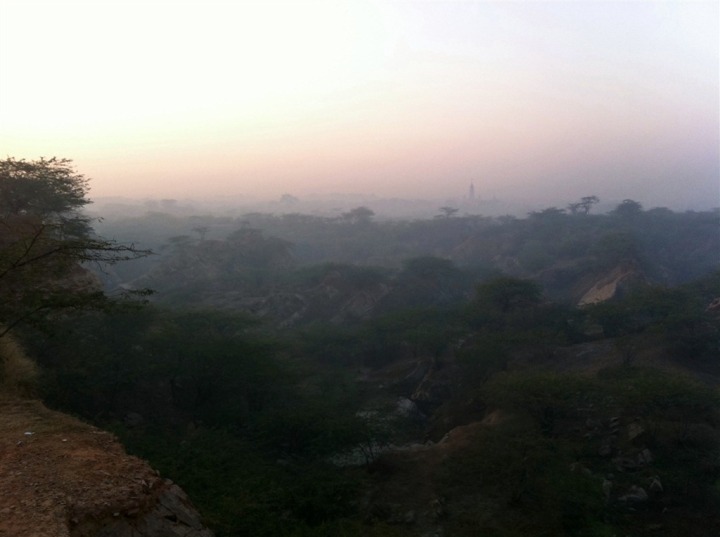 We’d aim for the temple, and continue to follow a meandering route towards it. 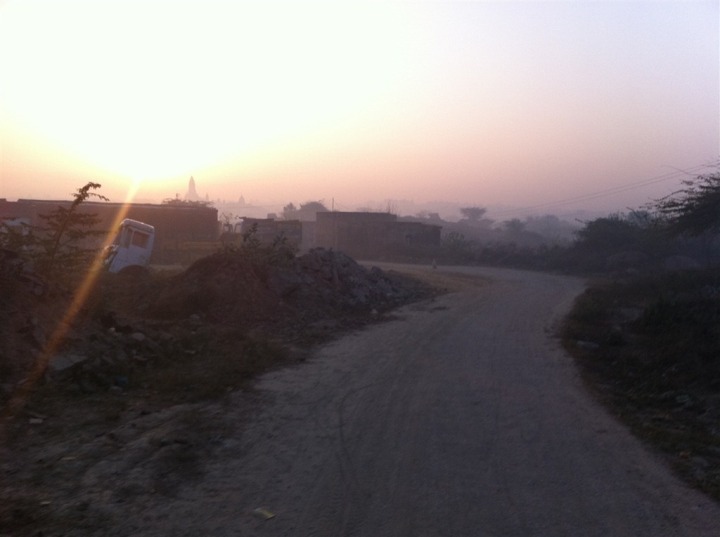 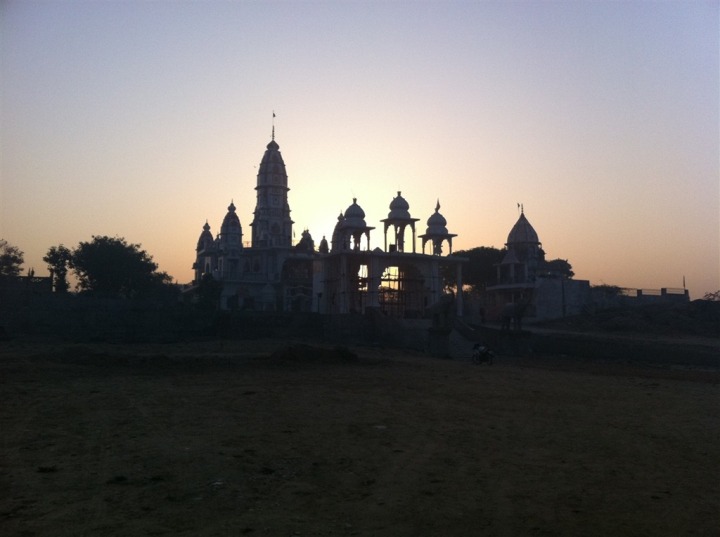 Once at the temple we took a few minutes to check it out and go inside.  Here’s a quick snap from outside: 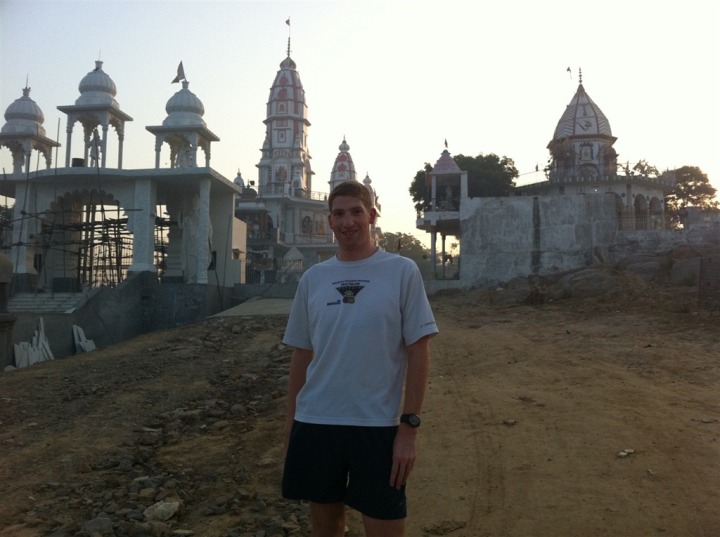 Along much of the route, but in particular in the brush and near the temple there were tons of peacock’s.  While they were incredibly difficult to get photos of, I did get their little footprints: 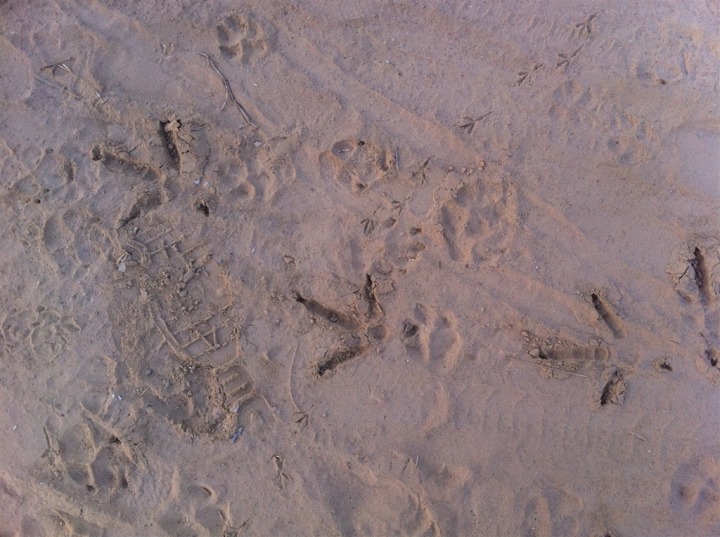 From there we backtracked a short distance through the brush towards a small village.  While the animal to people density increased in the village as we ran through – there were actually tons of animals along entire route.  For example – the always present cow: 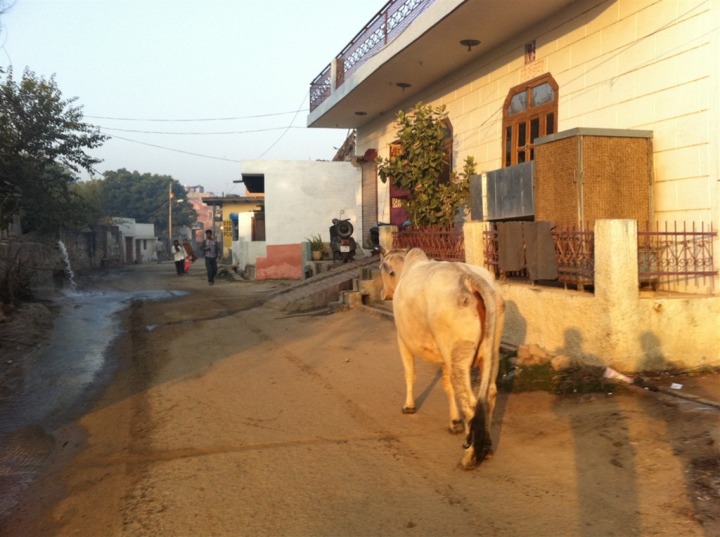 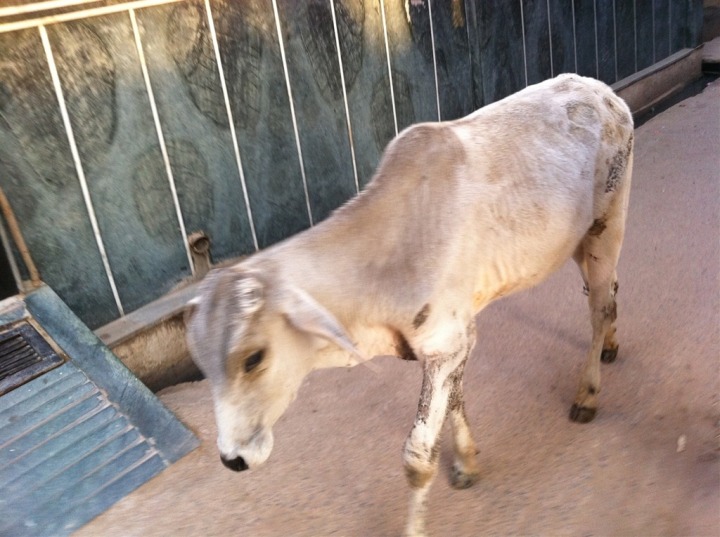 Or, his usually nearby friend – the donkey: 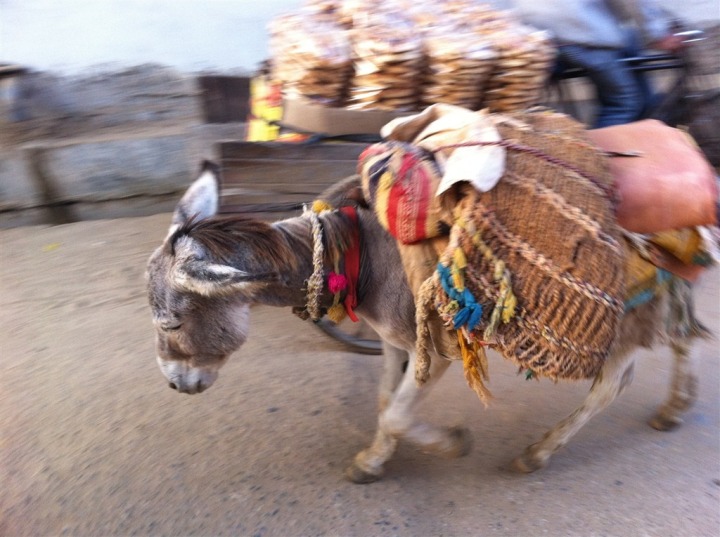 Less we forget the scavenging pigs.  I’m fairly certain I was the first person on earth to ever take a photo of this particular pig.  He was clearly confused by my intrusion into his breakfast. 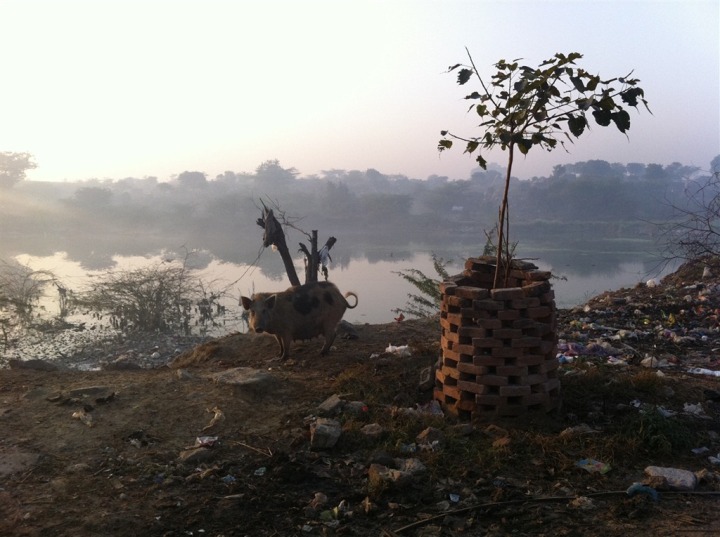 We also ran past (and through) a few herds of goats, but I can’t seem to find their photos.  However, I’d never lose the monkeys! 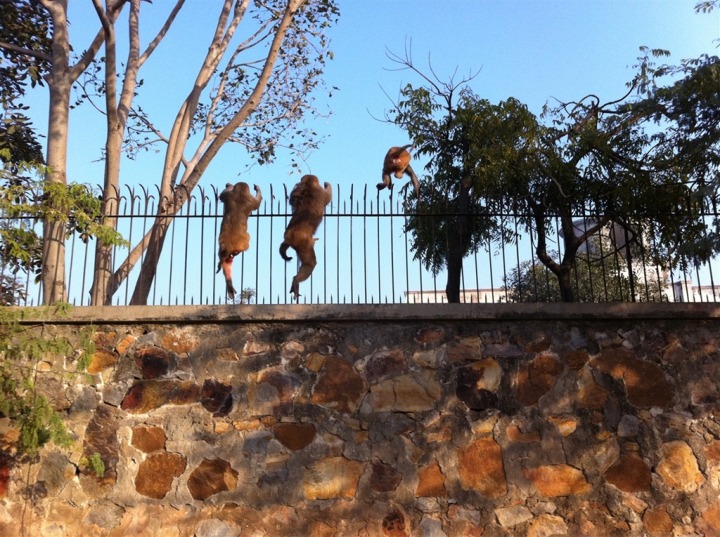 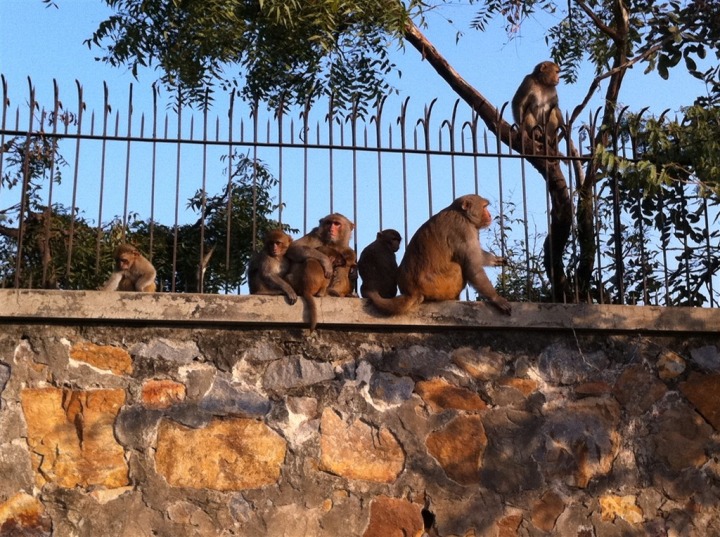 Along the way we stopped briefly in the village to pickup some donuts at a small shop. 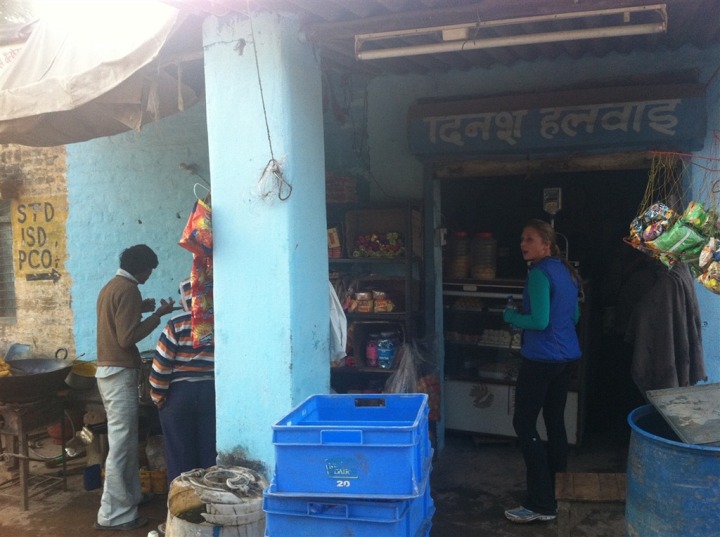 Though, most of these would end up being handed out to some of the local kids. 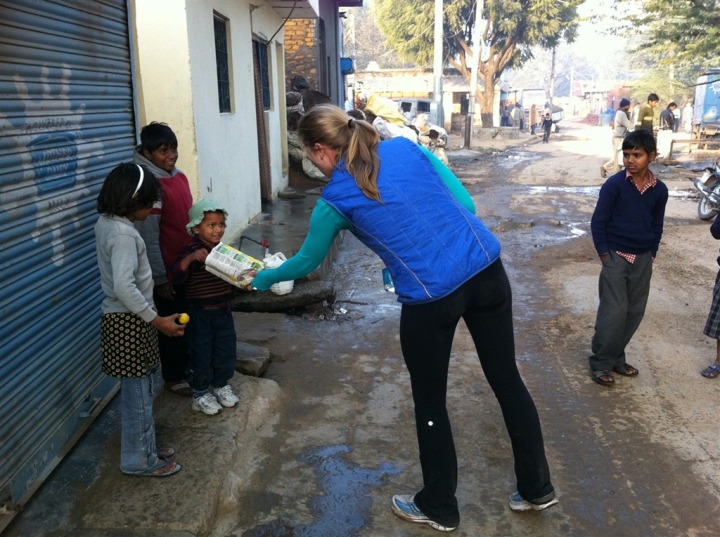 We waved the kids goodbye though and kept on cruising. 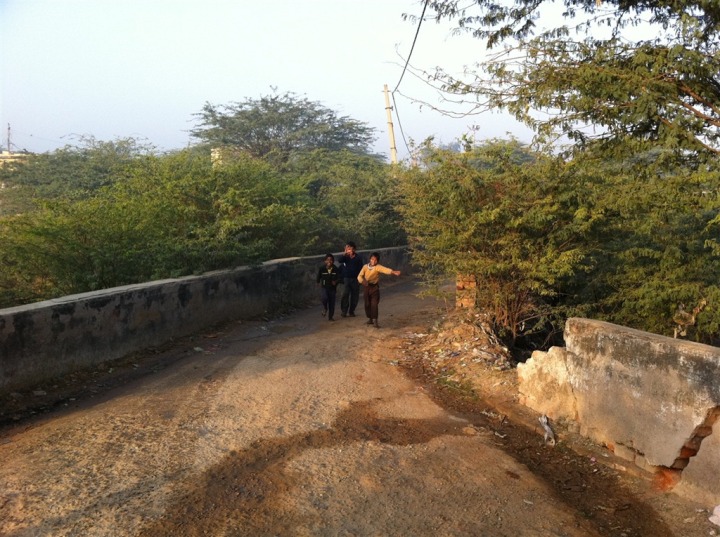 Actually, that reminds me – it was amazing how many people said hello.  Either in English, or in Hindi.  Everyone was friendly.  Though, I suspect they don’t get many non-local runners.  Well, actually, any runners at all for that matter.  We’re probably a bit of a curiosity.

The morning sun also made for some great photo moments as we wandered through small farms. 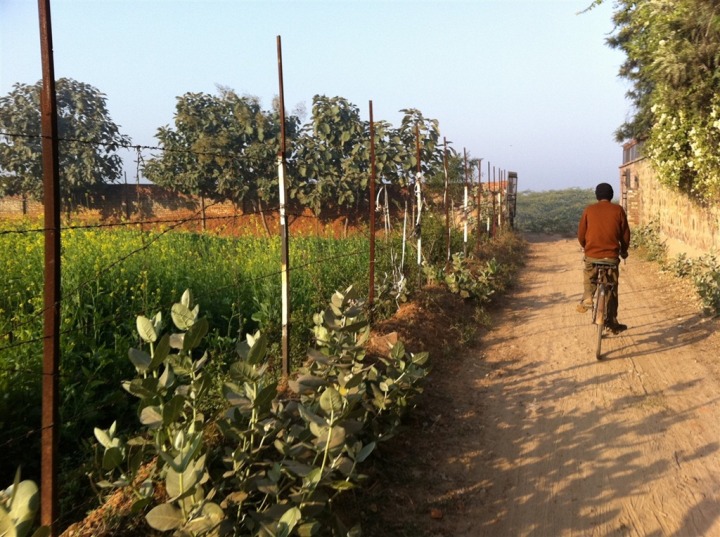 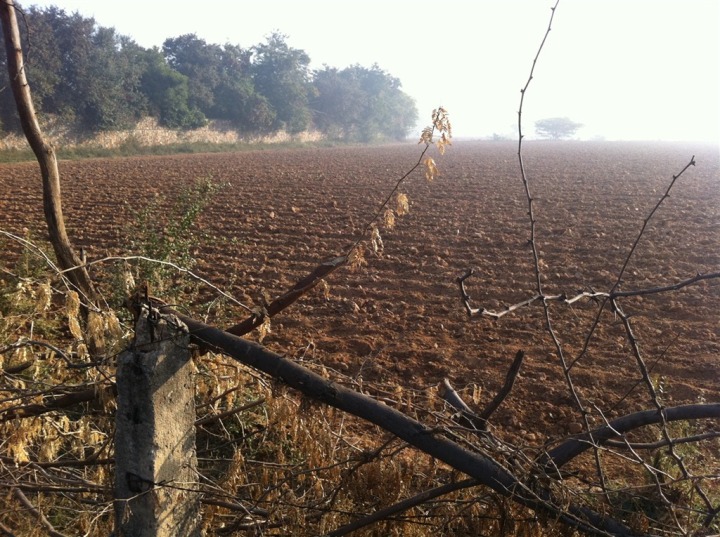 Finally, it was time to head back through the brush towards home.  As always though – no portion of India is quiet.  And even on these trails there’s still work being done.  Even if that work is by kids on a cart and horse carrying baked goods. 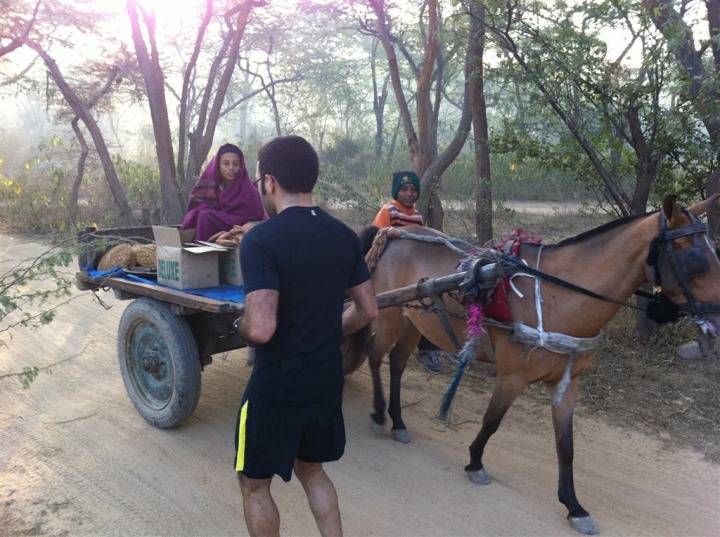 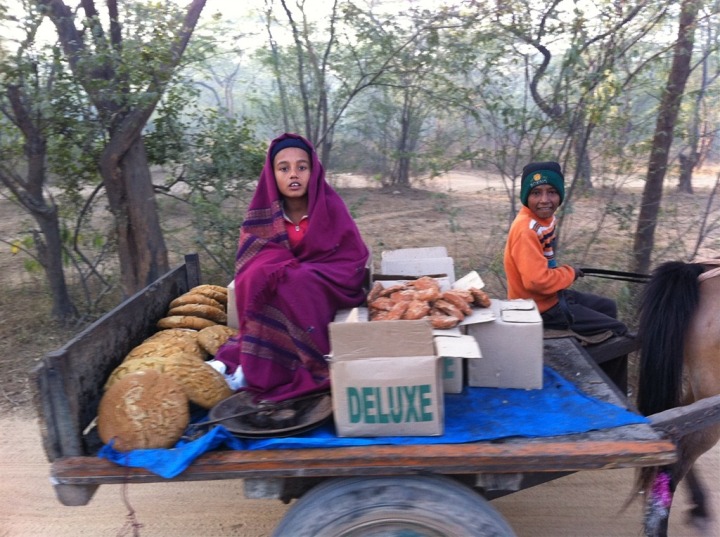 With that, I’ve got an hour before I have to catch a long series of flights ultimately transporting me from a very not-snowy India…to a snowflake filled Washington DC.  Have a good weekend all!