I’m a firm believer that what doesn’t kill you makes your stronger.  Al Franken summed that up pretty well with his quote:

“Mistakes are a part of being human. Appreciate your mistakes for what they are: precious life lessons that can only be learned the hard way. Unless it’s a fatal mistake, which, at least, others can learn from.”

I also believe that a large part of my ramblings here is to provide you with an educational experience.  Specifically, one where you learn from all my mistakes, perhaps thereby minimizing the number of them that you choose to repeat yourself. 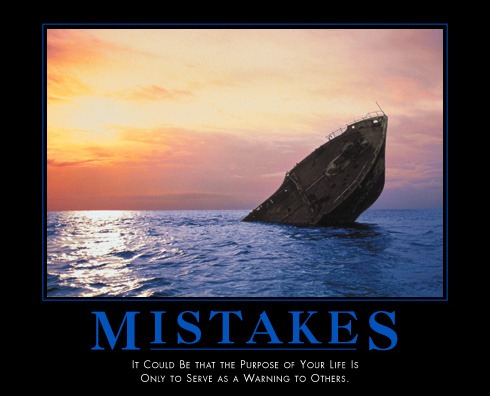 So in an effort to illuminate some of my more ‘highly talented’ moments, I’ve put together the below list.  If nothing else, I assure you it will provide plenty of entertainment.

Ya know what I’ve found?  That some of the most embarrassing screw-ups actually occur before the race even starts.  I think this is because I can’t even blame fatigue at this point…just…well…my own stupidity.  Here’s when things went wrong before the starting horn even sounded:

Usually when you have two people packing for the same race you double your chances of packing success.  But not in this case.  Despite going through multiple Race Day and Race Travel checklists, we found ourselves with our race day nutrition not exactly making the trip up to Rhode Island for the race.  With a longer event like a half-iron, you spend considerable time ensuring that you train with the nutrition that you plan to use on the course.  So when you realize the morning before that you lack all of it, you pretty much freak out.  Then go ahead and multiply that freak out factor by two people people (myself and The Girl).  Let’s just say it was not good times.

Thankfully though my parents came to the rescue and found the only place that had it in stock – about an hour away in Boston, and drove up and back to get it for us.  Yup, they’re awesome.

Like many big inner city races, they are filled with lots of complexities and things to keep track of.  Yet while I managed to navigate all of the more complex items…I inexplicably managed to forget my goggles on race day.  See the day before I had gone to get in a swim workout and taken a different bag. Somehow in the packing activities the night before the swimbag didn’t get set back into my regular bag – despite my packing list.  Thus fast forward to race morning and I find myself on the banks of the river with thousands of my dearest friends trying to borrow a pair of goggles.  Turns out I’d find one friendly women who’d lend me a pair of goggles.  Pink goggles.  Pink leaking goggles.  But goggles nonetheless… My pre-race fails (and during race fails) wouldn’t end there though, but it’s probably best you just wander on over and read the first portion of the race report.

In retrospect I knew this was coming…but I just didn’t think it would get as bad as it would as quickly as it did.  See I was having a bit of an issue in the weeks prior to the race where when I would go and shift into certain gears the chain would drop (fall off towards the outside).  This was being caused by a bit of damage to 4-5 gear teeth on my large chain ring (that’s the front gear).  But somehow in the craziness in the days prior to the race I forgot about this only to be painfully reminded about it as I was riding my bike the short quarter mile or so to bike check-in the evening prior.  Despite the onsite bike mechanics best efforts to remedy the situation there wasn’t much he could do aside from get it to stay perfectly in one gear with the sage advice to ‘pretty much avoid shifting’.  So I did.  And if you watch the video from that race you’ll notice that I pretty much never shifted.  But in the end it worked out with a 3rd place overall, so perhaps I should break my bike more often.

Fear not though, my chain ring is now happily swapped out for a new one…albeit post-race.

Just a week prior to the DCTri chain ring incident I found myself at the start of Boise 70.3.  Everything pre-race was going along just great.  Bike was racked, transition area all setup, and all the prerequisite port-o-potty visits had gone swimmingly well.  I even got some sunscreen applied.  And then I went to zip up my one-piece triathlon suit.  As I did so the fabric connecting the zipper piece to the tri-suit piece got caught on itself and then subsequently ripped itself away from the tri-suit while at the same time damaging some of the zipper itself.  After a bit of analysis I attempted to make the situation better…but that only made it worse.  Before I knew it – I had a completely open and permanently stuck tri-suit.  My solution?  A small army of safety pins pulling the suit closed like a scary looking voodoo doll, especially when some of the safety pins would pop loose, sharp ends and all.  Not at all my most fashionable hour…

The On Course Race Fails:

While it seems that getting to the starting line is half the battle…the other half is clearly on the course.  Here’s my top on course Homer Simpson ‘Doh!’ moments:

There’s little more terrifying or astounding in triathlon than a bike crash.  But when you add a car to the mix, the holy crap scale increases dramatically.  And assuming one ends up relatively alright (though everything’s ‘relative’ when you involve cars), it will always make for an interesting story.  And since the whole story is far to long to type here, I instead typed it up in my original race report.

Come to think about it, 2010 really wasn’t a good year for me and luck at races.  In fact, I didn’t even mention getting severe food poisoning the night before the Las Vegas Tri last year.  But this paragraph is instead about the St. John’s Triathlon up in Newfoundland, Canada.  I was pretty excited about this race for a slew of reasons – namely that it was in The Girl’s hometown.  The swim went…swimmingly, and I was quickly onto the bike ready to rock in roll – with a very solid chance of nailing the overall podium.

But…the Newfoundland pavement gods wouldn’t have it that way.  I’d end up flatting about 5-6 miles into the race.  No worries, I was able to quickly tear off the tire and stick on my spare tubular.  Then, just as I started going, I found my other wheel had flatted. Lacking any more wheels I kept going on the flatted tubular to complete the first loop (6 more miles). I was lucky to get a sag wheel swap for the flat tire as I passed transition.  Yet my flat tires weren’t done yet.  By the end of the race I’d end up flatting my newly replaced tubular yet again.  Needless to say, at $100+ per tire, it was a very expensive race day…

Continuing my 2010 season of falls and fails, I went into September at a race in my hometown of Seattle.  The swim went fine, and the bike so-so, but I was really looking forward to the run since that’s my strongest sport.  And with a sprint race having ‘just’ a 5K run, it’s pretty much balls to the wall.  Add to that the nice cool climate of Seattle (compared to the sauna of DC) and I was ready to rumble.

Well, turns out I should have said ‘rumble and tumble’.  As I was navigating the turnaround at the out and back of the race I managed to slip and face plant right onto the ground.  Astoundingly my face wasn’t damaged, but my leg did get fairly cut up.  The cool part here though is most definitely the gash and blood stream running down my leg mixing with the light rain to produce a very Hollywood horror movie like situation.  In fact, it pretty much looks like I was shot. Thus, let’s be honest, that’s just pure awesome.

4) Escape from Ft. Desoto 2009: Having to stop in the middle of the run course for directions

This was my first triathlon of the season that year and I was really excited about throwing down on the sprint course. The swim went fine, and the bike went exceedingly well. I was onto the run and screaming along when I got to a section of sand dunes and beach (I should mention that neither of which are ideal for running) which had conflicting signage. One sign pointed one direction, while navigational cones pointed another direction.

See one of the hazards about occasionally lucking into the pointy end of the pack is that there isn’t a stream of folks to follow. Sometimes you end up having to blaze a trail…quite literally in this case. Another runner (and competitor) came along, but we were both equally as confused as to which way to go. In the end we took a gamble and lucked out, but it did cost me a touch bit of time and probably a few places on the overall standings. But I certainly can’t complain with an AG podium either.

So I just rounded up my top race day fails, but I wanna hear from you!  What have you got hidden away that others can laugh at learn from?  Remember, points are awarded for both the mistake…and the recovery.