Some races you just have a good feeling about, while others you don’t. Back a few weeks ago I had a ‘less than ideal’ feeling about the National Half-Marathon. But this past week, I was feeling pretty good going into my first tri of the season – the Escape from Ft. Desoto. My splits, wattages and heart rates were all aligned and everything seemed ready to go. Plus…it was a sprint.   So…off we go. 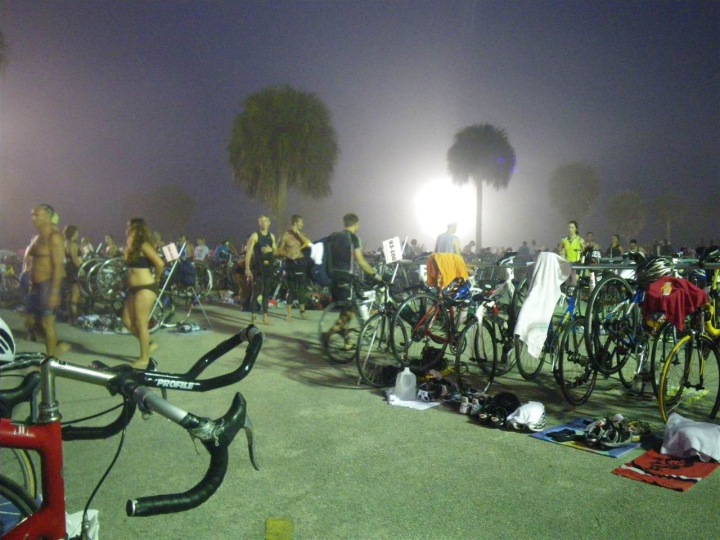 We (the girl, her family and I) got to the race site about an hour before the first wave, as I usually do. But due to some minor parking lot issues, we waited in traffic for over 30 minutes. Thus we only had about half an hour to walk a 1/3rd of a mile, get body marked, get into the transition area, setup, and then do that whole bathroom dance. Luckily, it doesn’t take me long to setup in transition, so I was able to do that and go through my transition checklist all in under 10 minutes. 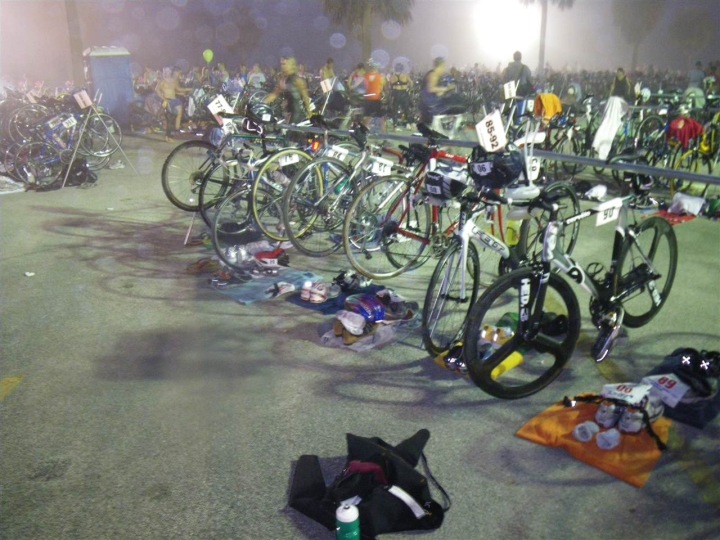 (That’s my bike there to the left of the orange towel, with wetsuit out front.)

That left me about 10 minutes to go to the bathroom, and complete the half a mile journey to the beach (it was a long T1…). Thankfully, there was a solid palm tree brush area that was getting utilized by a lot of athletes.

Eventually we got down to the beach area for the swim start. And there was a crap-ton of people. Approximately 1,300 racers, plus some family out there.

Of course, you might notice one minor little problemo. Or perhaps you can’t see the problem…which is the problem. It was so foggy you couldn’t see the swim buoys – they’re actually just offshore in this photo, but invisible. So…they delayed the start about 30 minutes until they deemed they could see the swim buoys. In all honesty – most people agreed the fog conditions hadn’t changed much, but off we went into the fog. I’m on the starting line in the below picture, getting ready to head out. I’m the one directly below the flag, looking off into the yonder. 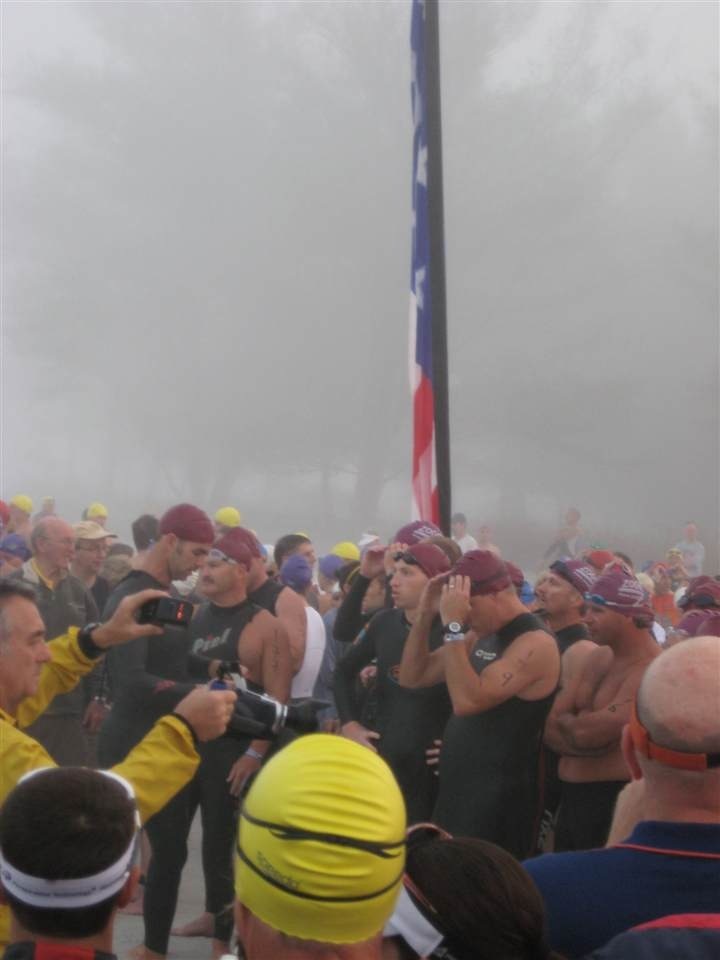 The swim (Half a mile – 800M):
The swim had a beach start (where you run into the water), so I knew I had to be on the front edge to be able to stay competitive in the swim and subsequently the race. So when the horn went off I ran off into the water and was easily one of the first guys swimming along. I probably made it about 75 yards swimming and at a good clip before I got steamrolled. The Floridian train of sprint swimmers and clydesdales rolled over me like a freight train.

But, I kept on chugging. And soon enough all these big dudes and little skinny swimmer dudes couldn’t hang. Which…was actually a bit of a bummer. Because remember that fog? Well, you couldn’t really see the buoys at all. You just had to follow the trail of carnage from the previous wave and ensure you stayed between the kayakers. Eventually you’d pick out a buoy and swim towards it and then repeat the process.

Anyway, I kept on pushing relatively hard and before I knew it I found pay-dirt…or rather pay-sand, and ran for the beach. And despite my general inability to swim, I came out of the water 3rd out of my swim wave (including my AG, and all the cyldes that pummeled me), or roughly a 100 people.

Of course, while we may have left the water, we most certainly weren’t done with it yet. Nope, that half a mile T1 included a run across the beach, then across a lagoon, back up on the beach, through some park and grass, and finally into transition. Below is the lagoon we ran across from the beach. I just wish I could have sat there and watched all the racers – that would have indeed been a blast! (Photo taken later in the day…post fog) 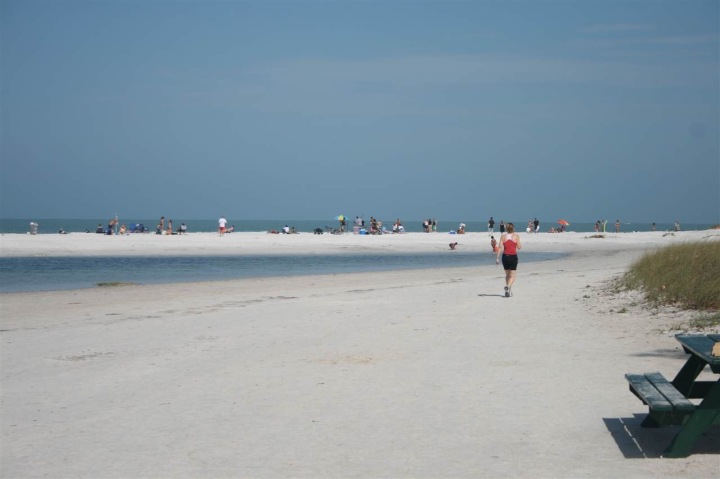 The water was probably about a foot or so deep, so enough to slow you down. And also enough to realize the spectators were actually probably there watching and waiting for folks to face plant into the water. Sweet! Total T1 time: 3:20.

The bike (10 miles):
Functionally speaking, the bike was the least complex of the three sports during this race. The route was a very simple out and back course on a pancake flat cay. There was no wind, no hills, and really nothing to worry about. Well, except the fog. The fog was so thick it was actually covering my glasses glasses with water, so every minute or so I had to wipe them off to see anything. Oh, and I did almost run over a little lizard. Luckily he stopped running an inch before my wheel. 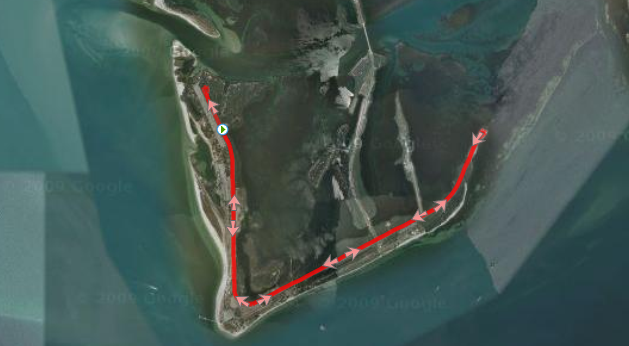 I had setup my Garmin Edge 705 on my bike and pre-programmed my race plan (HR between 167 and 170) into it. If I strayed from that, it would yell at me (roughly sounds like parakeets getting slaughtered). I had no problems with the whole flying mount transition concept and was quickly on my way. I got into my shoes about a third of a mile down the road once I had picked off a few other people from the wave in front of me.

Then it just became a relatively straightforward ‘just peddle’ situation. Given there was no terrain and very few people at this point given my standings, it was pretty much racing against yourself. There was one guy in my AG in front of me, and we played tag back and forth the whole ride. Both of us clearly staying within our respective HR zones since neither of us made any attacks. Just cruising along. In the end he would end up 10 seconds ahead of me, which was fine. There’s no point passing someone going into transition for 10 seconds.

Around mile 6 or so on the bike I saw The Girl going the other way, she looked strong and said hi as well. That was pretty cool and fun.

T2 was really really quick. We (the guy I was playing tag with) both flew into transition with him having a few second lead, and we were racked back to back. But he apparently ate a doughnut or something, and thus we departed transition virtually together. I had easily made up the 7-10 seconds on him just in transition with no additional work.

The run (3.6 miles):
So, the run started off a bit rough. I made it about 10 feet out of transition and realized I had no idea where I was going. And really…neither did the other guy. See, the bike exit (starting the bike) and run exit (starting the run) were the same – and going in the same direction down a long parking lot. You can see me and the other guy exiting here trying to figure out where I was going, and the bikers exiting at the same time too. 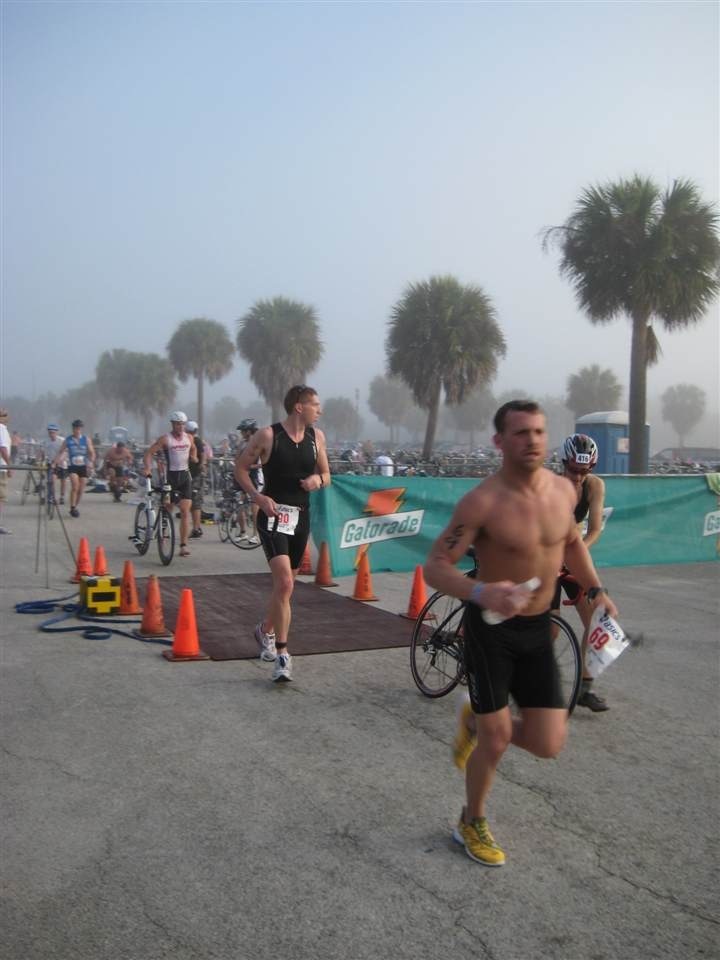 I started asking folks which way to go, and most just kinda looked at me like I was crazy. Eventually on this long line of people a few pointed down the parking lot, so I just kept on running that way. I would notice by the end of the race that there were no volunteers anywhere on the run course, and none on the bike course aside from transition and one water stop. Kinda odd. Anyway…

At the end of the parking lot, I had many options on where to go, but decided to follow some traffic cones.  Luckily that worked out too, and I was finally on a bike/running path and knew were I was going.

I was cruising along at a pretty good clip, roughly 5:50-6:10 a mile. Not as fast as I wanted, but certainly functional. At about the one mile marker one of the University guys just flew by me (different age group). He made me look like I was standing still. He had to be sub-5:20 or so (his actual avg pace was 5:27). But other than that, nobody was around me.

Eventually (well, only 1.7 miles later) we came upon ‘The Fort’, as in ‘Fort De Soto’. This is the location that we get to run up three flights of stairs, past some canons, and then down three flights of stairs. Like an homage to the Escape from Alcatraz infamous sand ladder. Thus… Up I went, down I went. You can see the stairs on this aerial view here. Maybe the coach will add the stair stepper machine to my next treadmill workouts….

And then you can see the stairs on my pace view below (first camel hump):

So that graph probably begs the question as to what the second camel hump is? Umm, that’d be shortly after dropping down the stairs and onto the beach (I didn’t know we had to run 1.7 miles on the beach..I guess I should have caught that somewhere), me and another runner I was passing at the time came upon ‘a situation’.

What kinda situation you ask? Well, one that requires a Tom-Tom. See, we had one little problem. We arrived at a decision making point. The cones showed sorta straight around a dune, but then the sign pointed to the right through the dunes back towards the original trail. On top of that, there was a gap in the cones. So I figured I’d make like a boy-scout and look at the tracks – they’re would be runner sand prints and a lead bike pacer track as well, right? Well, there were those going both directions. Here’s my little drawing with my paint skillz: 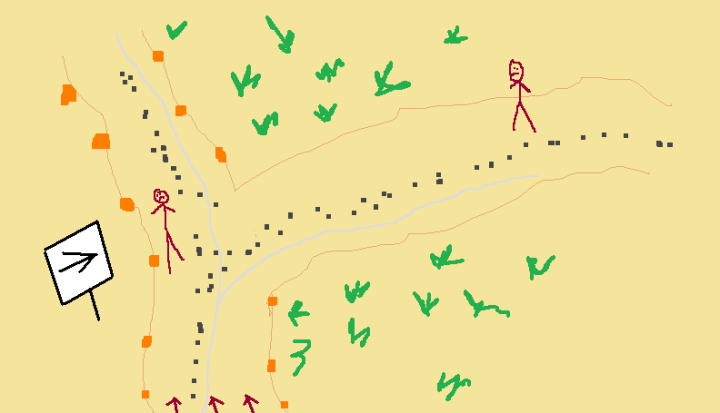 After about 30 seconds of standing there and jogging up and down in the sand dunes and lots of swearing at the sand dunes, we decided to continue along the beach. Sadly, this would cost me a top-10 overall finish. 🙁

From there on out I just kept on running. Rather simple really. I was really pushing it pretty hard. Of course, my pace was a bit slower since I was still running on semi-soft occasionally slightly harder sand. By this point there was nobody around me. I had left behind sand-dune dude a while back, and it was simply me and as far as I could see ahead of me empty. It’s really a tough way to run a race, as you just have to keep on pushing. You can see my HR though below, just kept on pushing harder.

During the last half a mile though I really pushed it as much as I could and got back down to the 5:30’s again. Finally the finish came into view (about three hundreds yards down a long parking lot) and I chugged my way through. Here’s me about a hundred yards from the finish, and then crossing the finish line…woot! 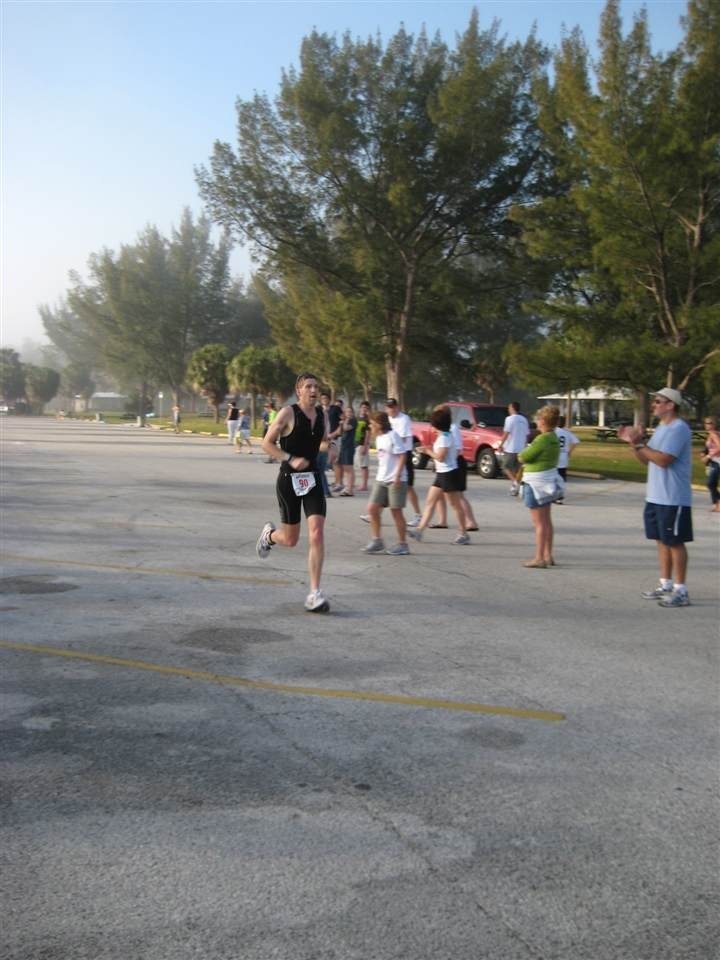 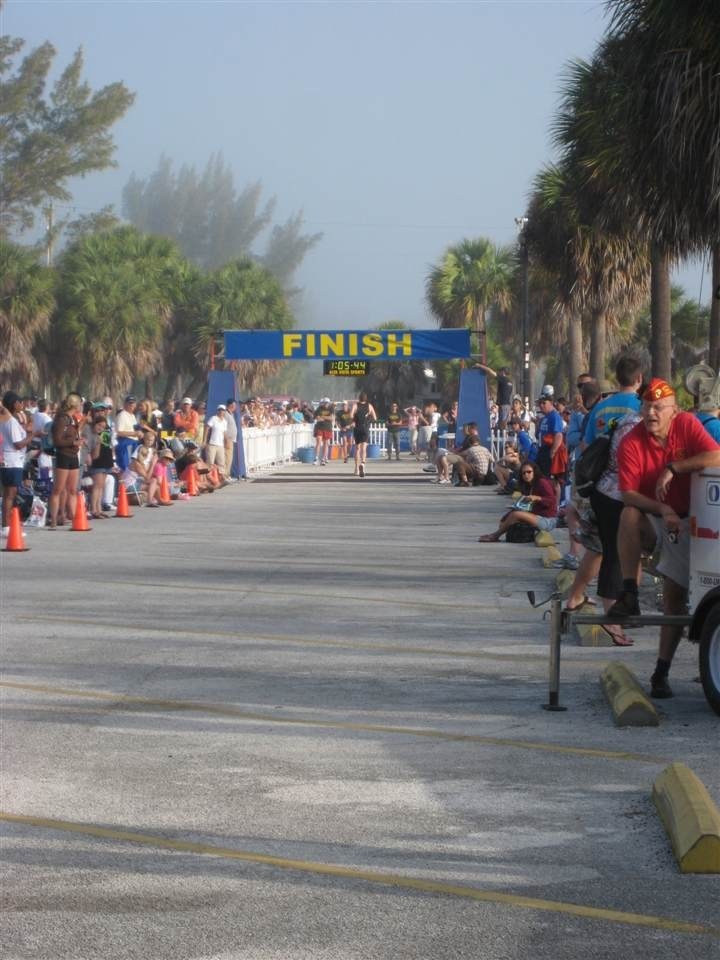 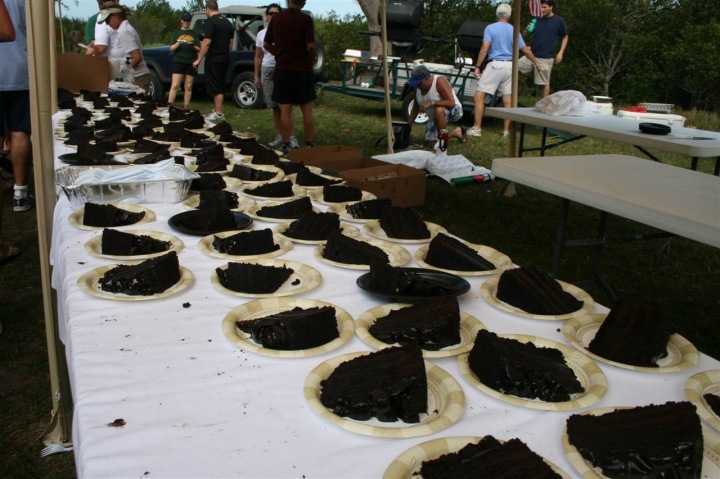 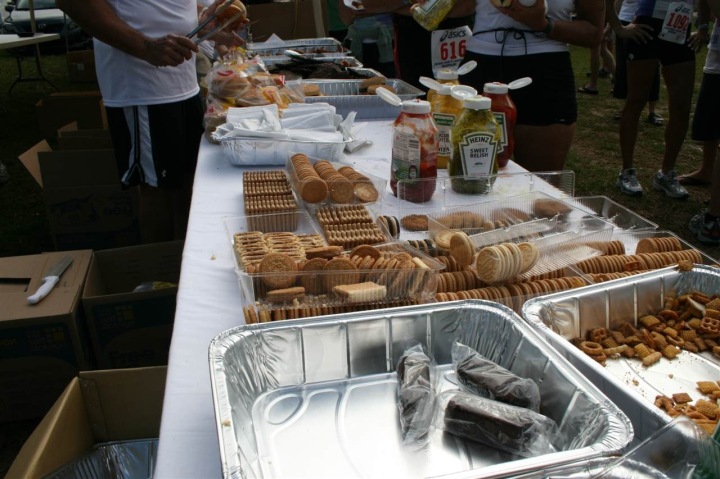 After a wee bit of time lounging around in the sun, the awards ceremony started. In an effort to make up for the delay, they accomplished the fastest awards ceremony known to mankind. I believe they hired one of those auctioneer peoples. But that’s alright…cause it was my name at the top of the Men’s 25-29 group: 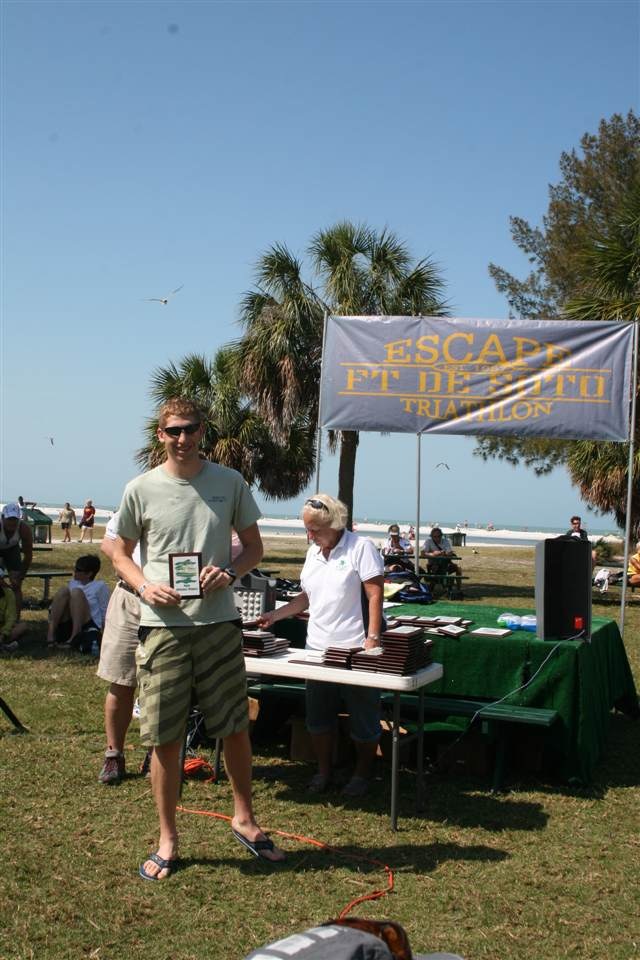 Here’s a closer look at the little plaque. 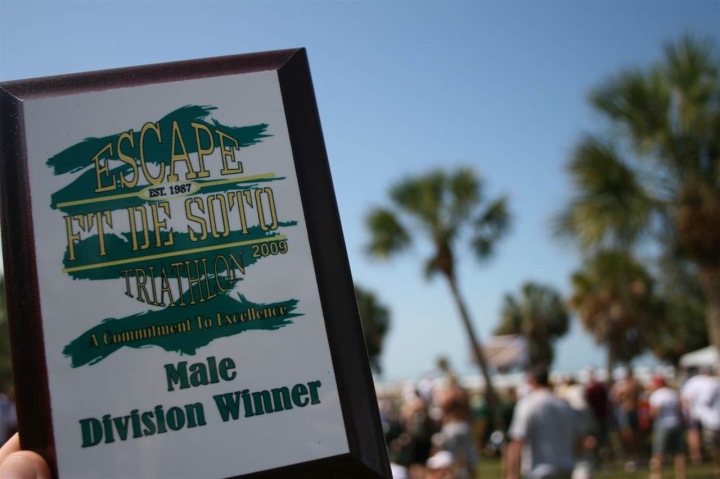 That’s it! All in all, a pretty good first race of the year. Certainly I would have loved the Top-10 finish (out of 1,000+), but I’ll happily take the 13/1000+ finish instead, with the winner only being four minutes in front of me. And plus, The Girl also took home hardware too, so you can’t beat a a twofer! Lastly, despite the little issues – it really is a good fun race with a very fast (and flat) course. If you’re in the greater Tampa area, it’s a perfect early season tri to get the year going!