As you may remember from yesterday’s little Space Shuttle adventure, we had a brief stop to make on the way home…or so I thought.  I had been told by pilot and crew (aka…The Girl) that we were just picking up a part for the airplane at a nearby airport about 15 minutes away by plane from Orlando.

After landing we taxied for a fair bit to a semi-remote part of the airport, where we pulled up to a hanger with a twin-prop plane in front of it, and a well decorated car to the right of it.

Shortly after the prop had ceased rotating, The Girl jumped out of the plane and ran over and gave a hug to the fellow that was waiting for us on the tarmac.  This is strange I thought – how does The Girl know the guy that we’re picking up an airplane part from?

And then it hit me.  The Girl has an uncle down in Florida that runs a Skydiving outfit in Zephyrhills Florida.  No sooner did that realization hit me than did the The Girl turn towards me with a mischievous smile and say “So…I’ve got something to tell you…you’re going Skydiving”.  The Girl is clearly nothing but trouble. 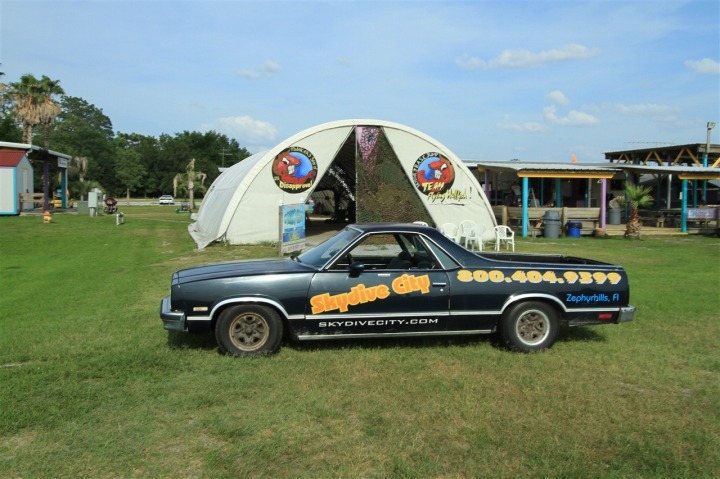 Before I knew it I was signing my life away…quite literally.  While there was pages of legal mumbo jumbo, this sign pretty much summed it all up: 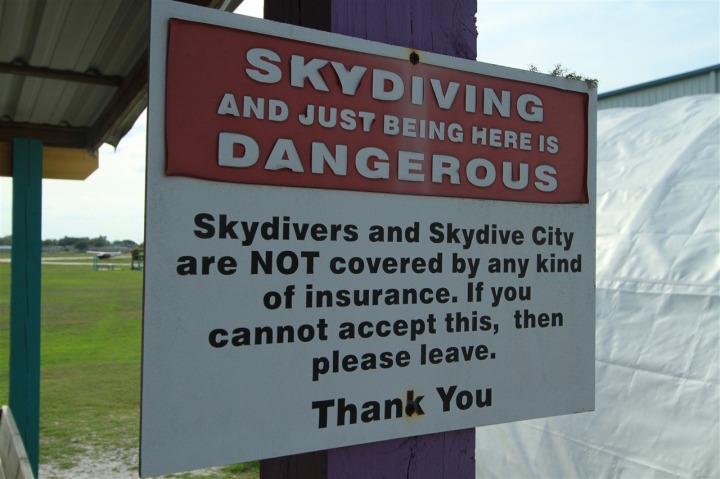 Before the ink was dry, I was escorted over to a rack of 1980’s stylish jumpsuits.  It wasn’t the suits that caught my attention, but rather yet another sign – this one seemed to hint at potential failures: 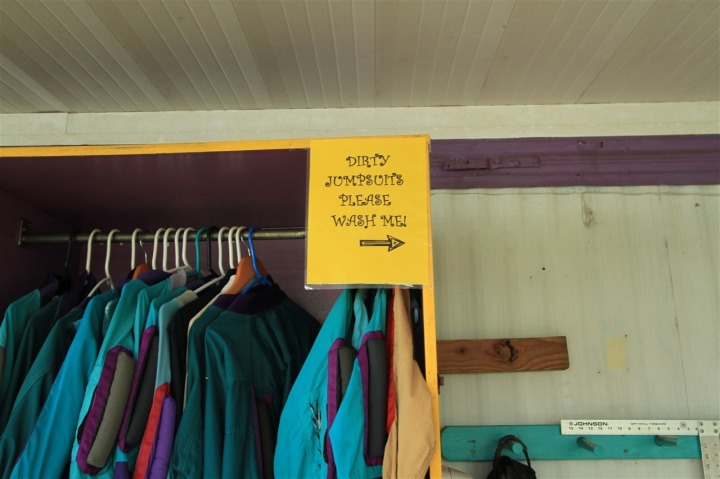 I guess in triathlon we just pee in our wetsuits and it all magically gets clean again.  But in skydiving, I assume it’s still pretty obvious upon landing.  That said…on it went! 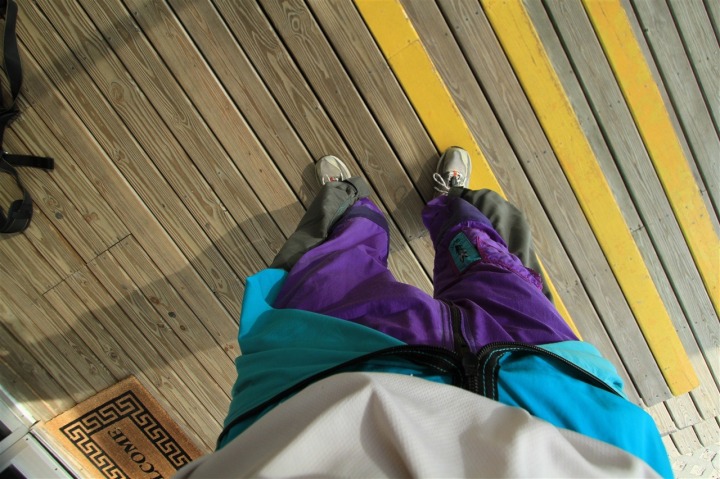 From there I was given a brief rundown of how things would go for my tandem jump:

There really wasn’t much more to it.

Given that, we headed on over to the airplane where I found more signs.  I must say, at this point, none of these signs seemed to indicate happy little bunnies and puppies.  It was all just a lot of ways to explain to me how bad things might happen. 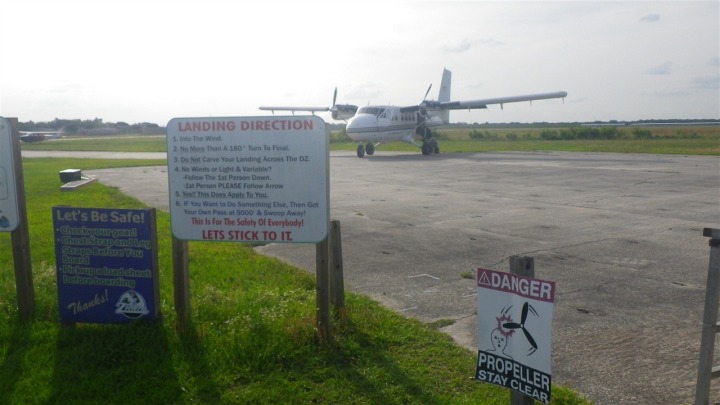 Nonethless…it was soon time to go. 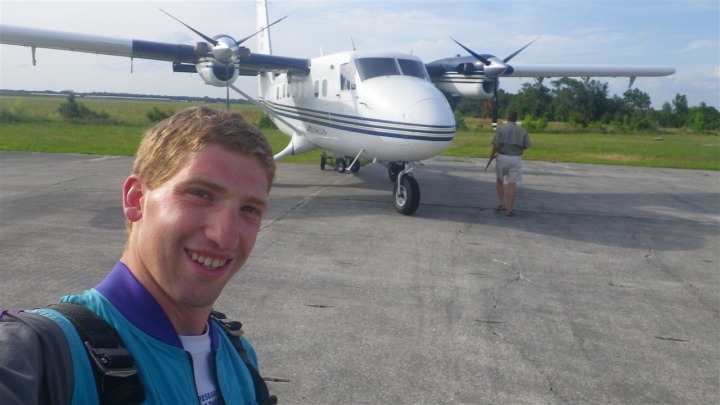 By go, I mean board the plane. 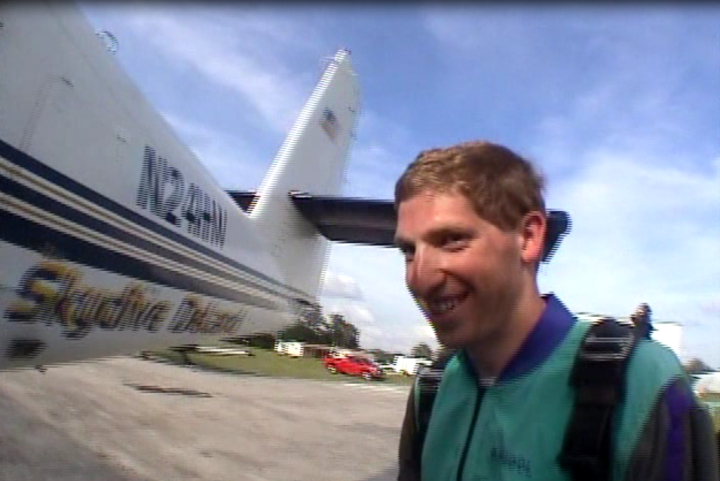 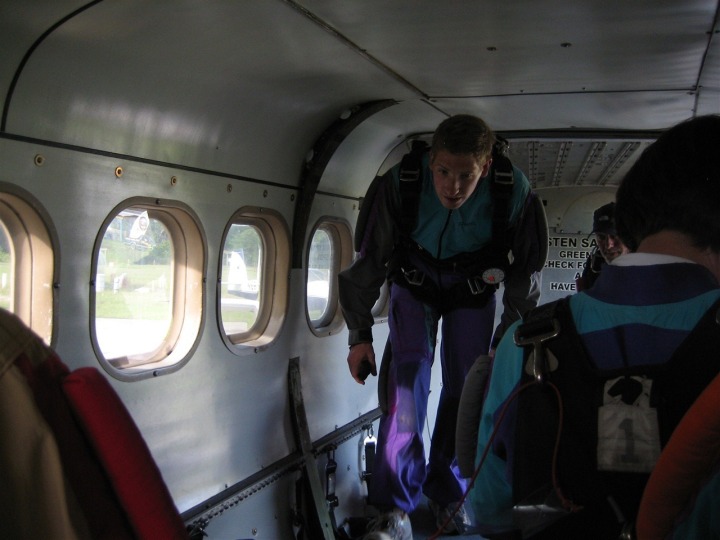 Shortly after boarding I found myself on the bench.  You know, probably the same kinda benches that they use on prison aircraft.  And probably not unlike prison, I had a guy named Tom was pressed up against my back.  That’s Tom: 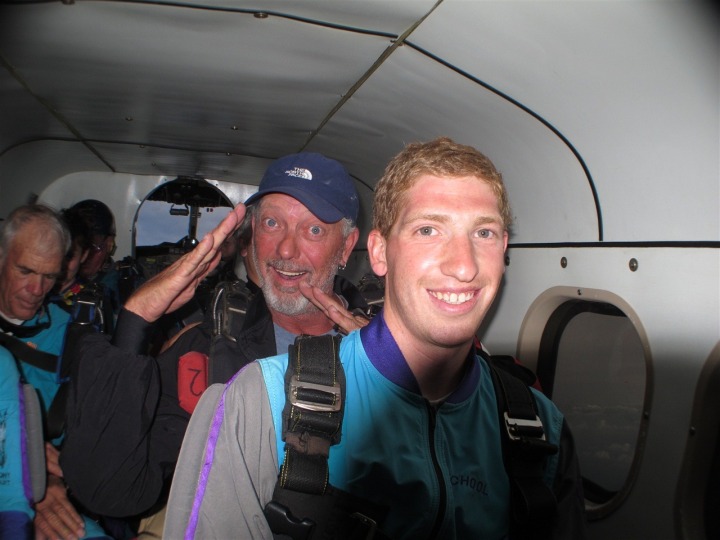 I have no idea what Tom is doing.  It was probably better I didn’t know. 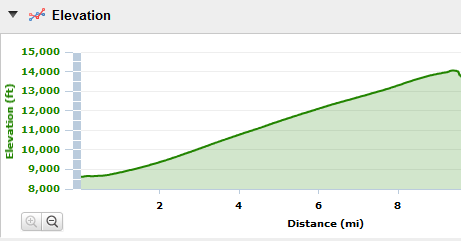 As we neared that altitude a curious red light went on in the back of the aircraft: 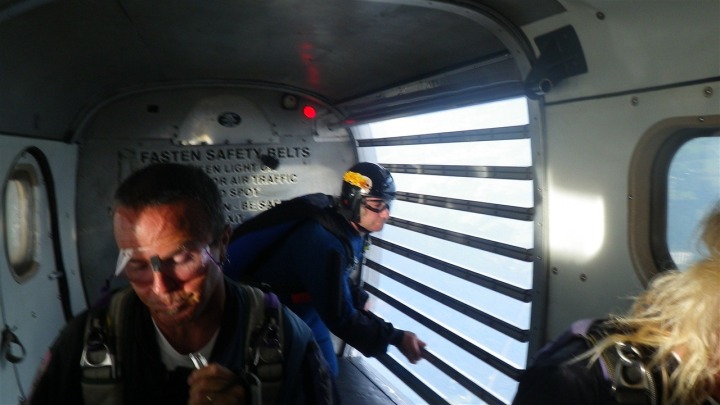 Around that time I looked out the window at the airport down below: 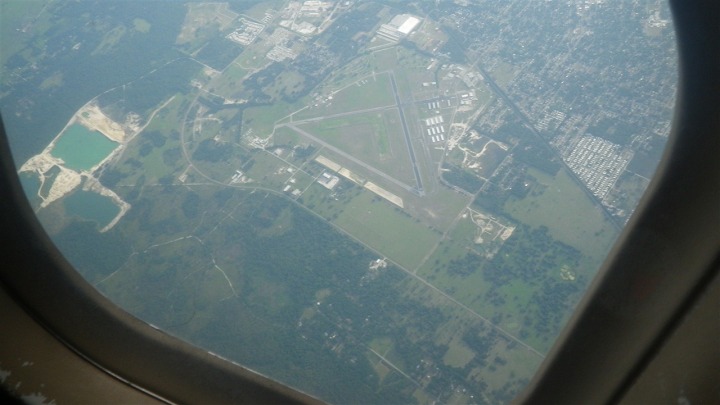 That glance out the window was immediately apparent as a very poor idea.

Shortly after the Red Light district, came the Green Light district.  And nothing good comes of the Green Light District.  That’s the indication that it’s time to depart the aircraft.  My attached friend Tom, scooted me over to the edge of the plane, where I then had a unobstructed view of the earth below me…without any provisions to keep me from falling out of the airplane. 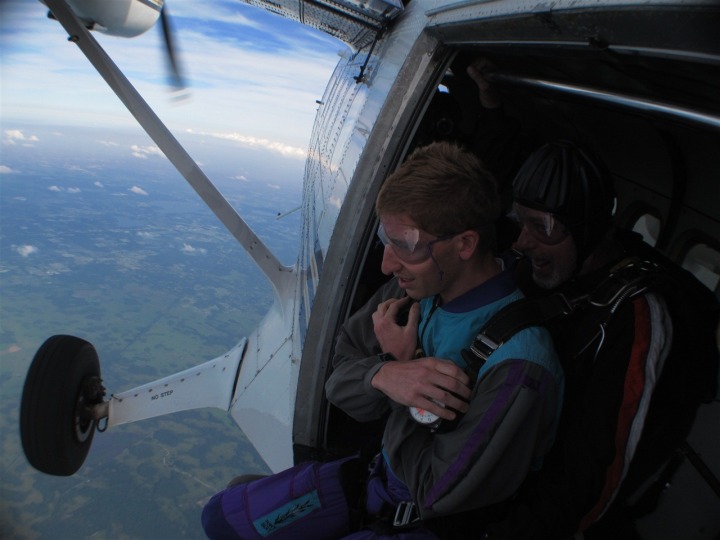 Strangely, the countdown procedure for being pushed out of an airplane isn’t like all other countdown procedures on ever created by man (such as ‘3-2-1-Go!’), instead it’s “2-Go!” – omitting both the crucial ‘3’ and ‘1’ digits.  I see no reason this omission should occur. 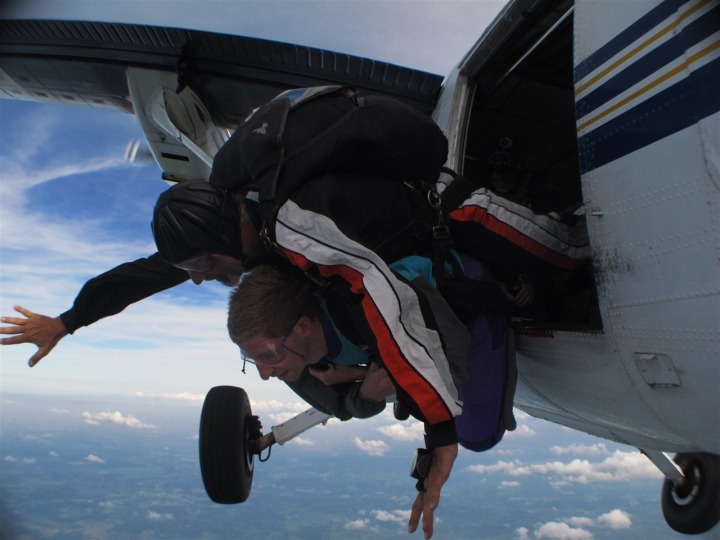 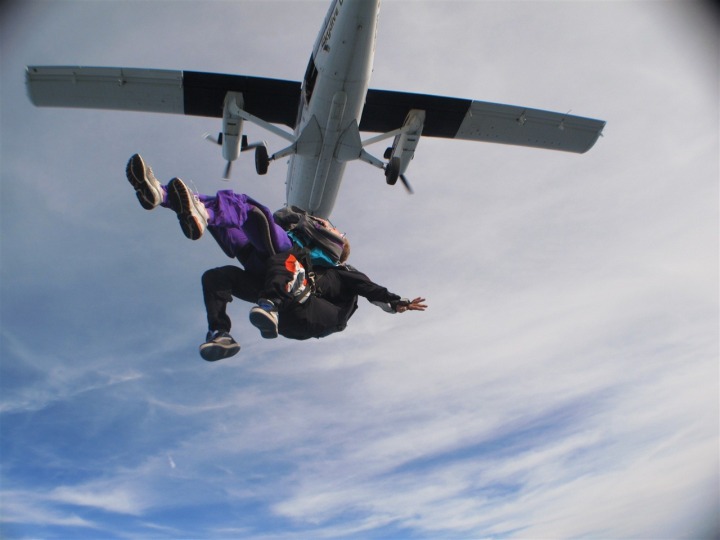 At which point I was no longer in a position where I could debate the merits of the standardized worldwide countdown system.  It’s also at this juncture that I violated two key rules in my life:

1) Never put ones ass above ones head.  Nothing good comes of this situation…ever.
2) Never jump out of a perfectly good airplane.

After I got beyond breaking two life-rules in a single one-second period, I got onto actually really enjoying the freefall aspect, which would last about 60 seconds and 9,000 feet: 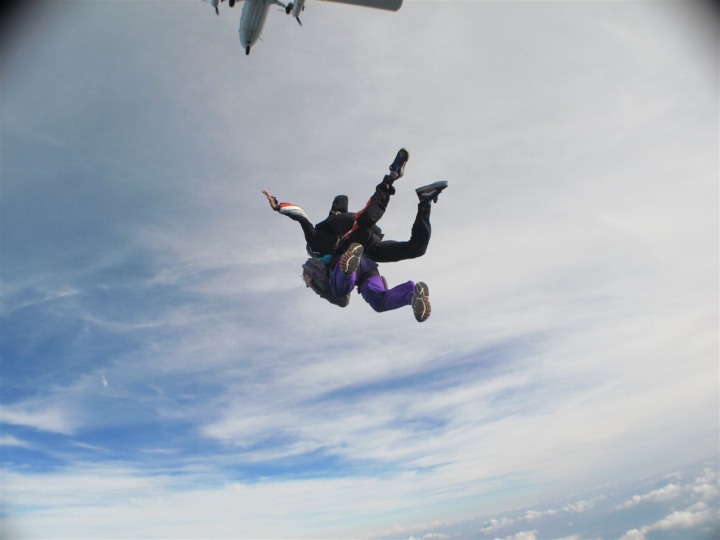 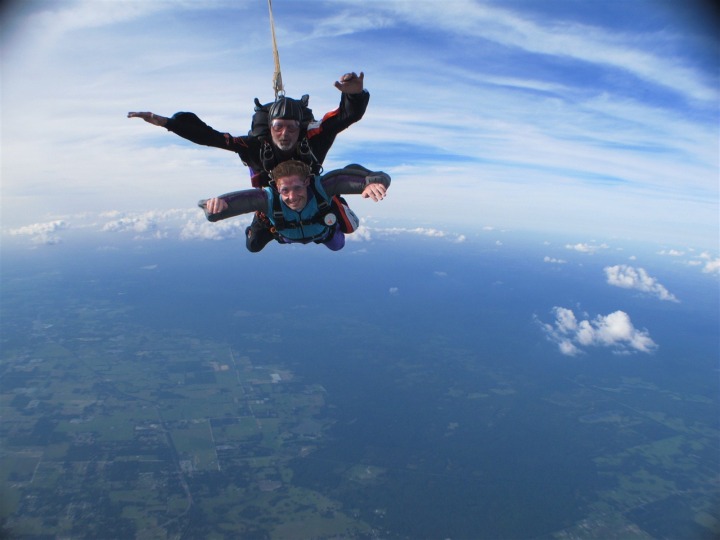 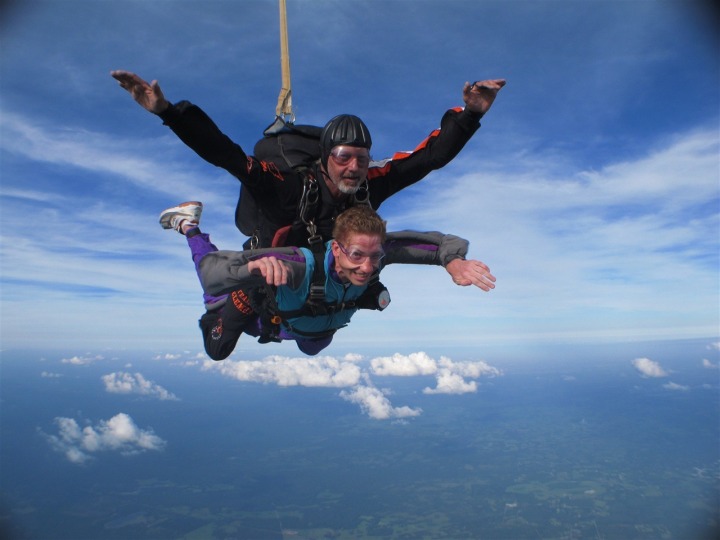 Along the way the video/photo man (who was actually pretty cool and into photography a fair bit, we talked before/after about cameras) linked up with my arm and we twirled around a bit.  You know, just in case the sensation of falling at 120MPH wasn’t enough already. 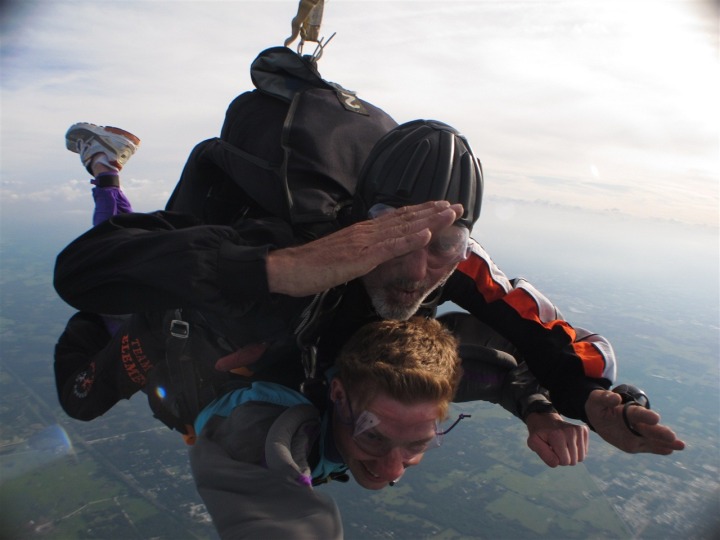 We then said goodbye as he drifted away from us.  Well, actually – nobody says really much of anything, as it’s like being in a hurricane.  All you hear is wind.  Lots and lots of wind.  No amount of screaming, yelling or even opera singing was going to be audible.

And a few seconds later, he waved goodbye as our chute opened: 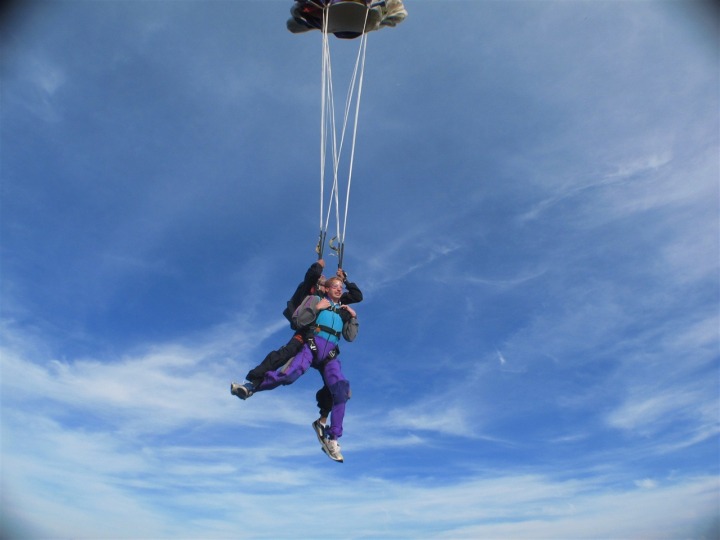 From there things got nice and quiet.  And I was able to check out the scenery with my own little camera. 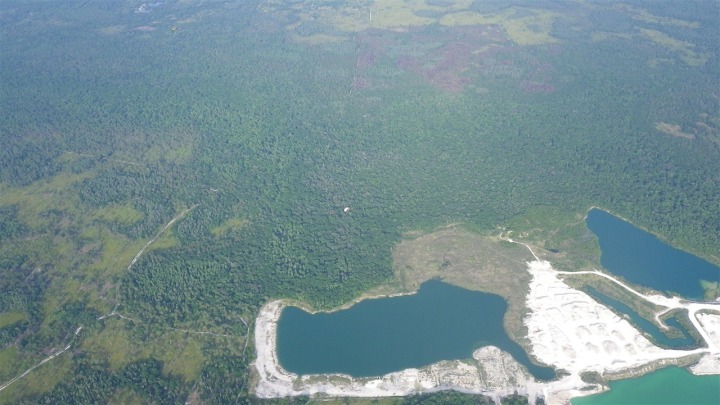 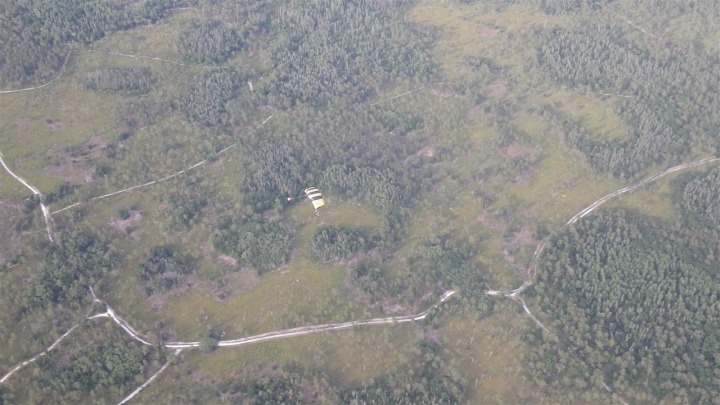 And even take a picture of myself and my friendly jump instructor: 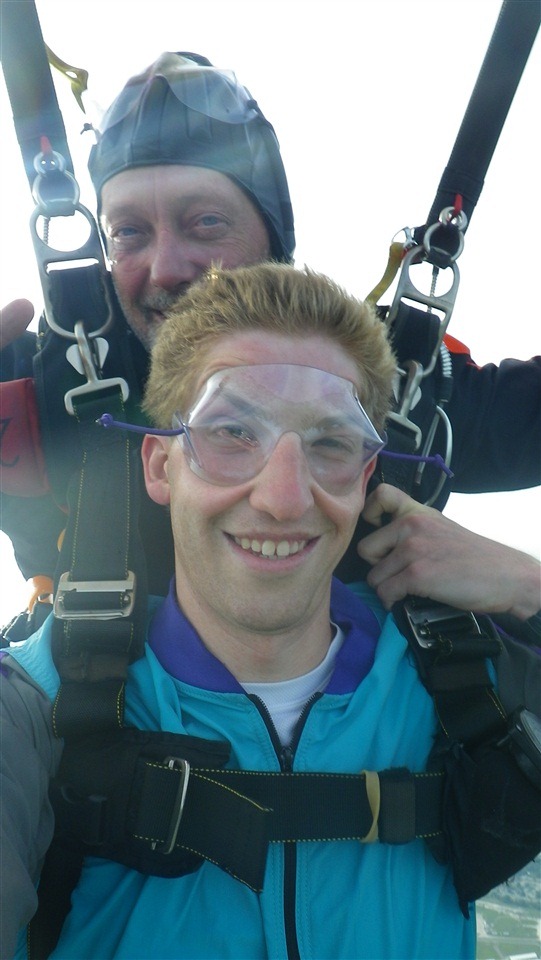 We lazily wandered about the sky – which you can see below from the GPS track: 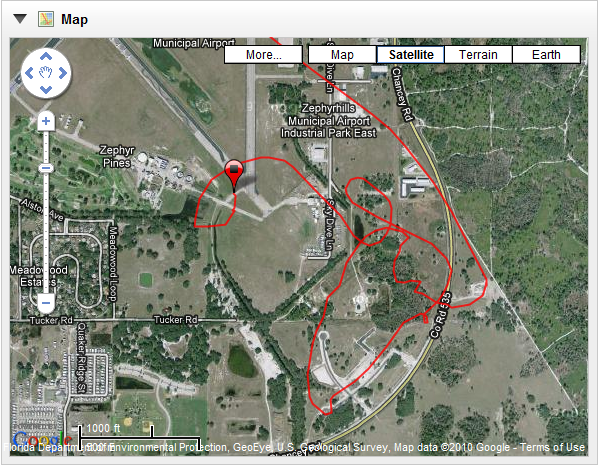 I was able to take a few pictures of The Girl, as she floated down below me a bit, as well as Bruce and others with us.  It was good times!

And then came a bit of a funny sensation.  Sorta similar to as if I was being held by a boa constrictor of sorts.  Everything just felt really tight.  I had noticed it shortly after the chute opened, but somewhat dismissed it, as I assumed it was just part of the deal-e-o.

But now everything was starting to become a bit fuzzy.  Sorta like when your glasses fog-up on you after moisture gets behind them.  Everything becomes slightly white.

And then a bit more white.  And I’m not just talking about my un-tanned skin.

While I could hear everything, and even talk – I just couldn’t see anything.  And there wasn’t anything I could do about it.  I wasn’t motion sick, or anything else – just everything was slowly going bye-bye.  Pretty much a complete whiteout within another 30 or seconds.  So basically the world looked like this to me: 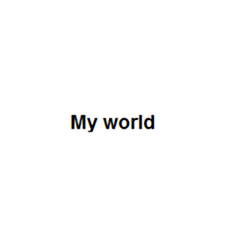 Shortly after that he called to prepare for landing, which I heard, and did respond (though perhaps not exactly in the right manner).  And then after a soft little bump, we were down back on planet earth. 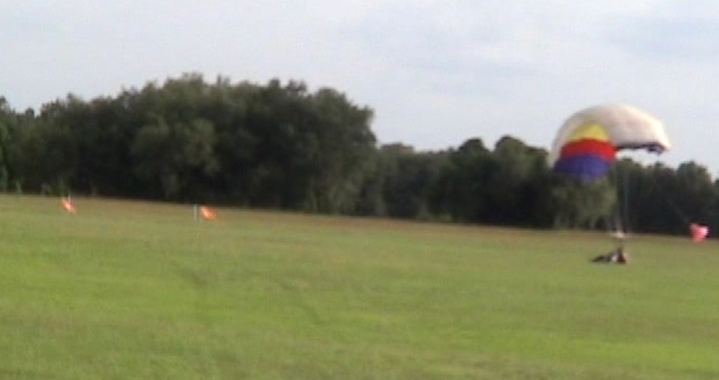 And I was still having a blast.  I just couldn’t see much of it.  But after a short bit of time and once the straps were loosened, the world came back into view, and life returned to normal. 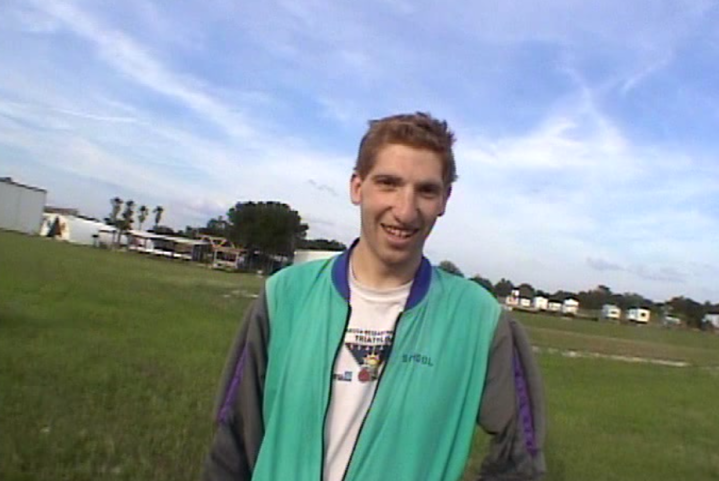 After we made it back to the the camp area, I got a nifty first-jump certificate.  The guys at Skydive City had a whole packet of goodies that I came away with.  Cool stuff.  Definitely recommend jumping with them! 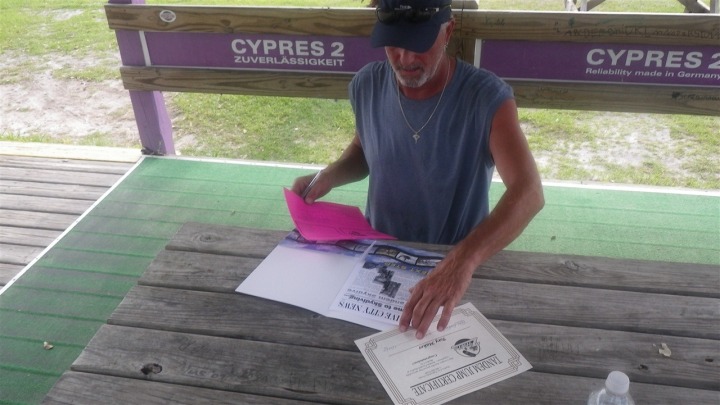 And, for your (and my) viewing pleasure – I also got myself a short video of the whole event – complete with groovy special effects, Rainmaker interview and music:

Check out the groovy video of my first skydiving trip.

So with that – my first Skydiving experience!  A surprise courtesy of The Girl, and without any warning.  Apparently her and Bruce (my pilot friend) had been scheming about it for months.  And given I had showed vague interest in it at some point in my life (as in: “Sure, someday that sounds like an interesting idea”), they decided to enact a plan to make that point occur sooner, rather than later.

And thus…how I ended up getting pushed out of an airplane at 14,000 feet.