Yesterday’s brick and track workout was a hot one.  When we arrived at the school, the little reader board temperature thing said 98*F.  Though that felt a bit high, a quick check later on revealed it was instead 90*F with humidity at 90%.

Which…would be just awesome.  And after Rhode Island’s little heat incident, I guess I need to get the heat training in one way or another, and no better way to do it than on a stationary bike and running around a vibrantly hot track.

So we setup the bikes as usual a few feet off the side and began our fun. 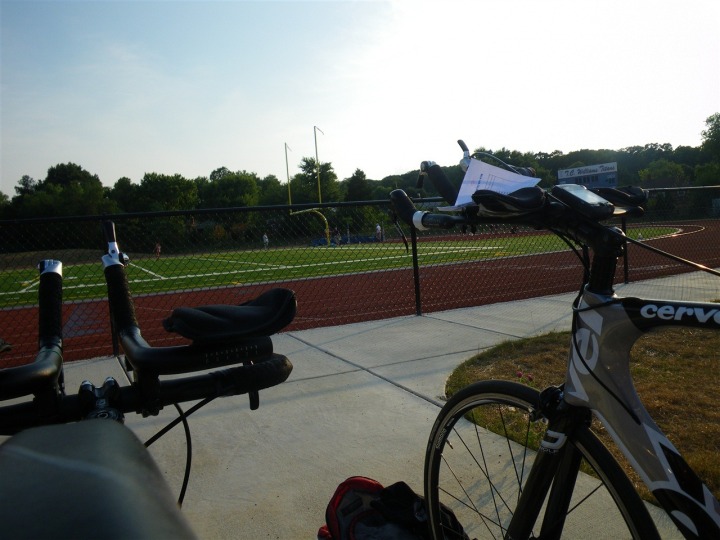 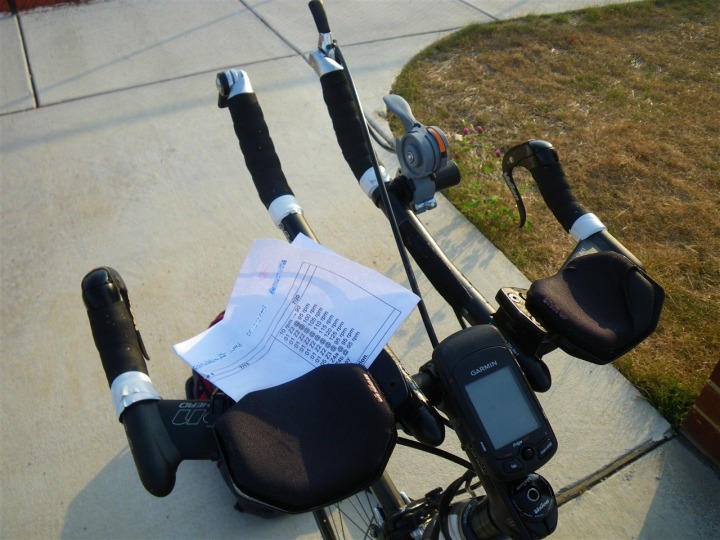 The ride would start off with a 10 minute warm-up before a brief high cadence section before getting into a lovely 5 minute sections of each Z3/Z4A/Z4B. 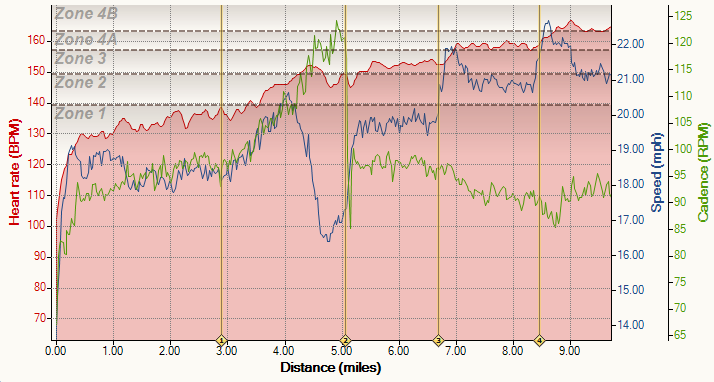 It was about halfway through the middle of one of these 5 minute sets that I started watching how long it took sweat droplets to evaporate once it hit the pavement.  When you’re legs are burning and the clock ticks slowly, there’s really not much else better to do. 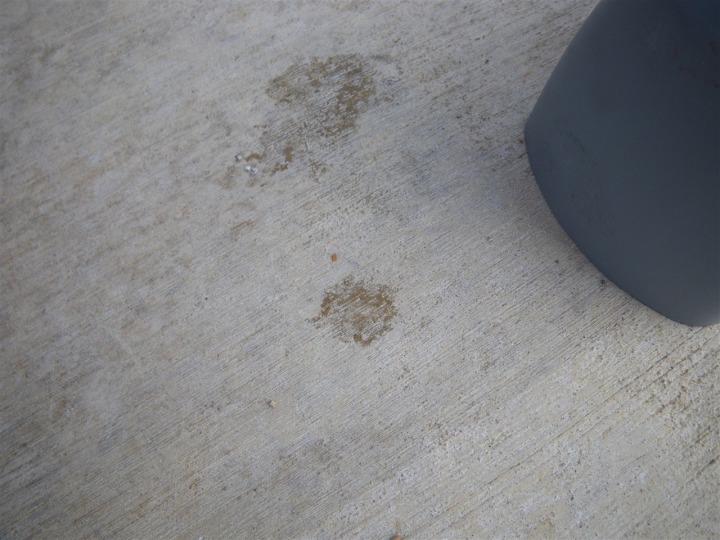 I found that it took almost exactly 75 seconds per droplet to evaporation.  Now, if I had a double droplet than it took a bit longer.  And a triple-droplet?  Well, all bets were off (mostly cause I’d get distracted on other droplets).

After that, it was time to bumble a few feet away onto the track. 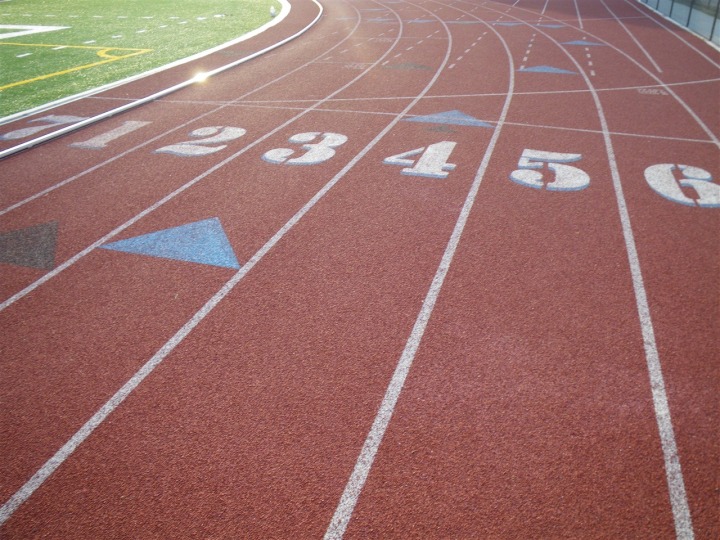 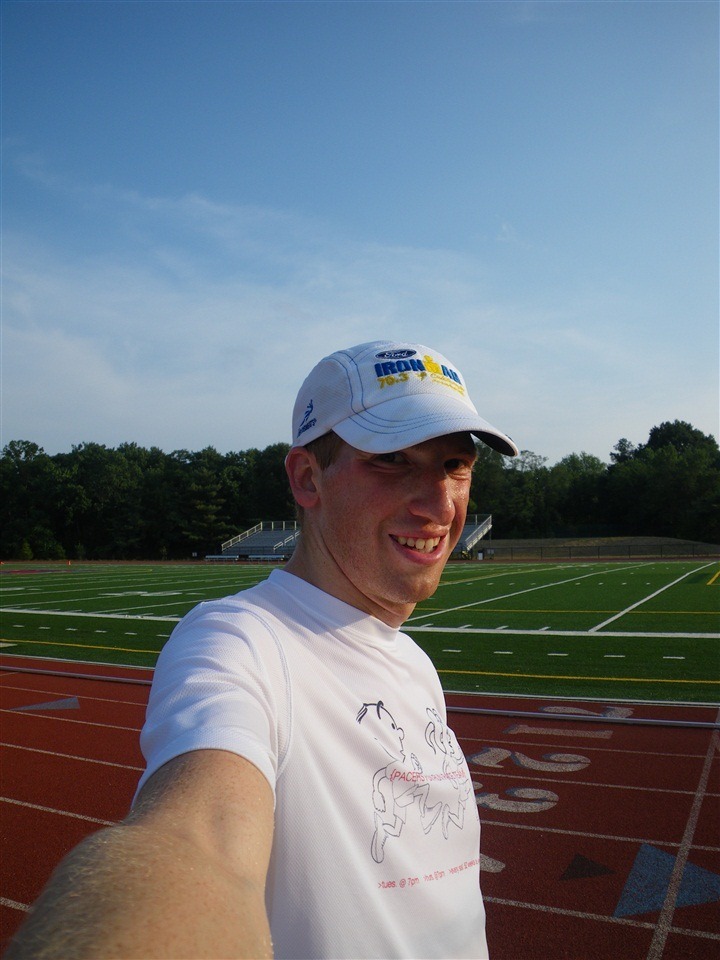 Today brought a bit more bike intensity.  For the first time since Rhode Island I was back into the 30×30’s, another painful entertainment option Coach Alan came up with.  After a similar 30 minute warm-up/build to above, I go into a set of 30 seconds on wattage, 30 seconds off (while maintaining a high cadence).   I’d do 25 of these repeats… 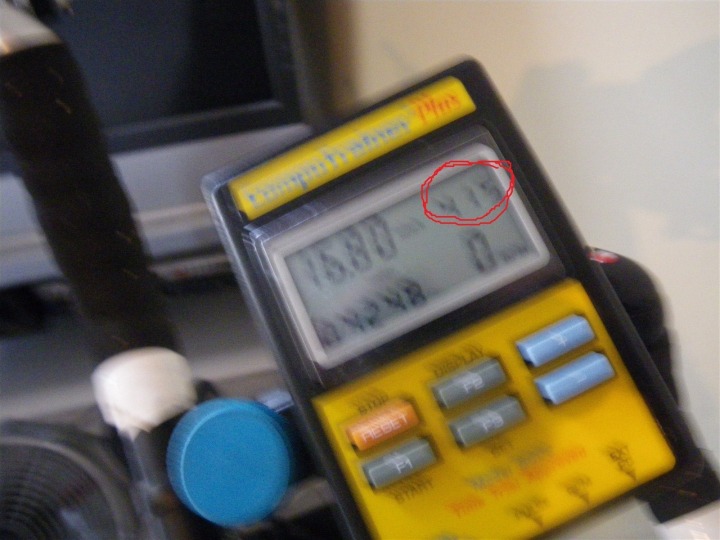 (Sorry for the blurry picture, my ability to hold a camera still while pushing 410..or 415w in this case…is relatively limited)

Eek the the last few seconds of the last ones burned a bit.  Though, actually, I can tell I’m getting a bit stronger, as I probably need to push that up slightly next time to 415-425 watts.  The CompuTrainer drivers the watts, I’m just along for the ride.

After over an hour on the trainer, there was a very nice little lake in my living room (on a rubber mat thankfully).  I would have made an equally aquatic feature at the gym following the ride, with my weight room action, but thankfully it was nice and cool in there. 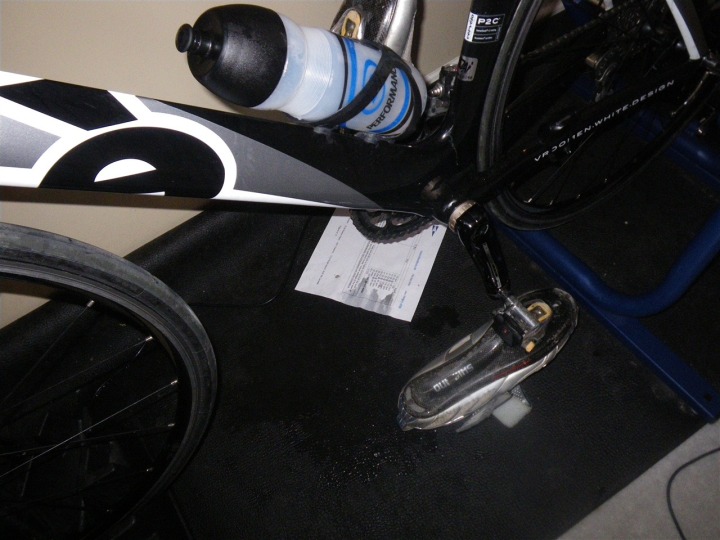 From time to time I note worthy causes to donate to.  One I want to call out is a Coastie (US Coast Guard Active Duty member) that’s raising money in conjunction with a century ride he’s doing.  Brandon is serving aboard the Coast Guard Cutter Venturous, which does an assortment of missions around counter narcotics (kinda like keeping EPO out of the Tour, only they have guns and helicopters…).  Thought he’s raising money for research around leukemia, lymphoma and myeloma, all while balancing being both underway on the cutter for extended periods of time working long hours – pretty impressive.  So go give him some support!  Just remember, the Coast Guard will be the ones to save you next time you swim soooo far off course that even the kayaks can’t get to you anymore (not that I have any experience with that or anything…).  🙂

Have a good Friday everyone!