My goal is to make like a cheetah and get this post knocked out.  It stands between me and dinner.

We left Tsavo National Park relatively early in the day to head to the small airstrip to catch our the small plane to a different part of Kenya. The flight would take us right past Mt. Kilimanjaro, and then along the border of Tanzania before landing in Masai Mara. 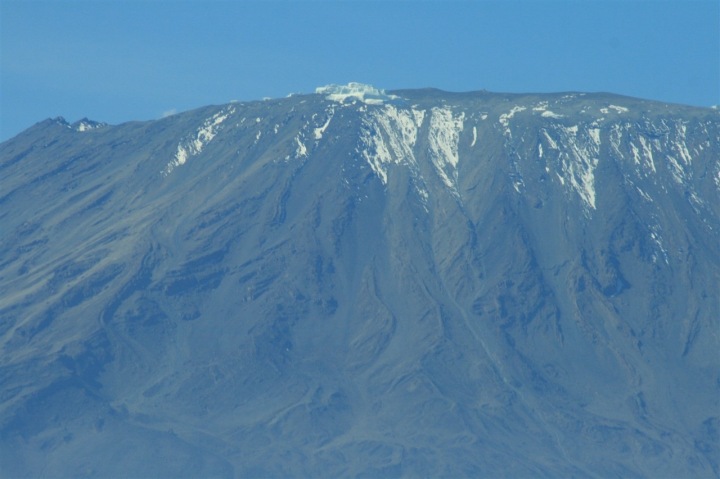 Here’s the route we took, according to my little Garmin Forerunner 305 (yes, we’ve been using it every day to see where we went, and then automatically geotag all our photos with the exact location – I just toss it in my backpack and forget about it). 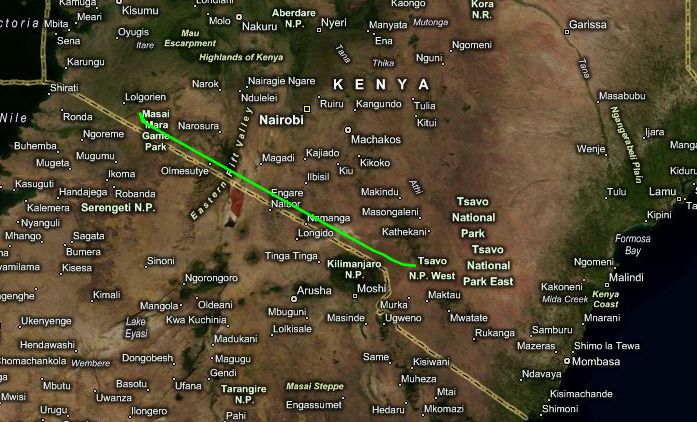 (We started in the lower right, and ended up in the upper left)

As we approached Masai Mara we noticed that the hillier terrain of Tsavo was replaced by sweeping grasslands and the Mari river.  You know how you see the Discovery Channel shows on Africa and it shows the animals trying to cross the river and getting trapped by the Crocs?  Yup…that happens here every summer (August to be exact) – as part of the great migration. I love this shot I snapped of the giraffes from the plane.  I really like giraffes, they’re such friendly yet elegant creatures.  You may have to click on the image to view a larger version to be able see the giraffes near the tree. Finally we landed and were booted off the plane.  It left a couple of minutes later, onto the next camp.  We meanwhile were left standing in the middle of nowhere.  Soon our ride would come…we hoped.  ‘Da plane boss…da plane!’ Eventually the ride did come and brought us to Mara Serena lodge, which is situated atop a hill. 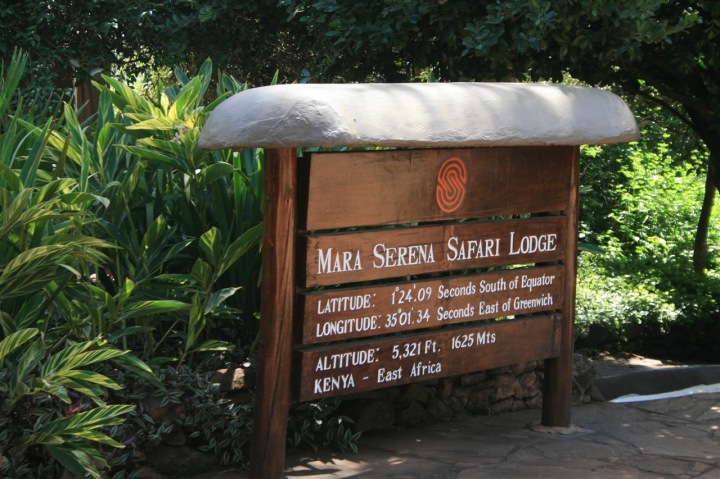 As we walked into the lobby, we were created by the following view.  Photos don’t really do it justice, as it’s actually a 270* view that wraps around, with all the rooms having amazing views identical to this. 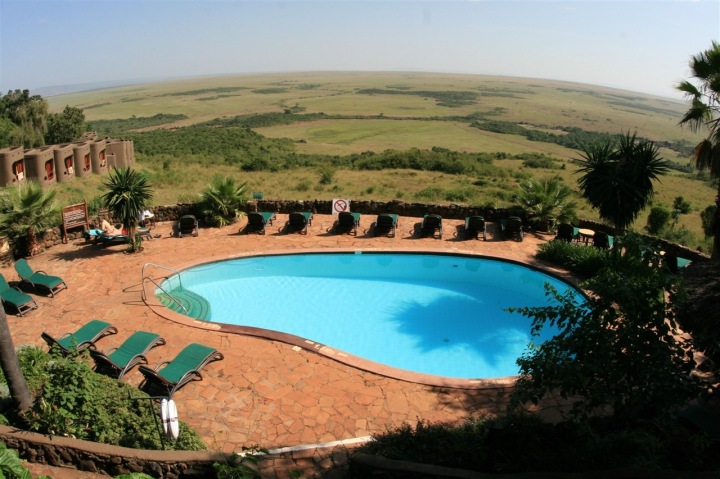 Our rooms however, were a bit more ‘magical’.  It felt like we walked into Mushroom land.  But it was tactfully done, and cute.  Plus we have a clear view over dozens of miles of rolling land.  Giraffes, elephants and everything else roam just outside our window down on the grass. 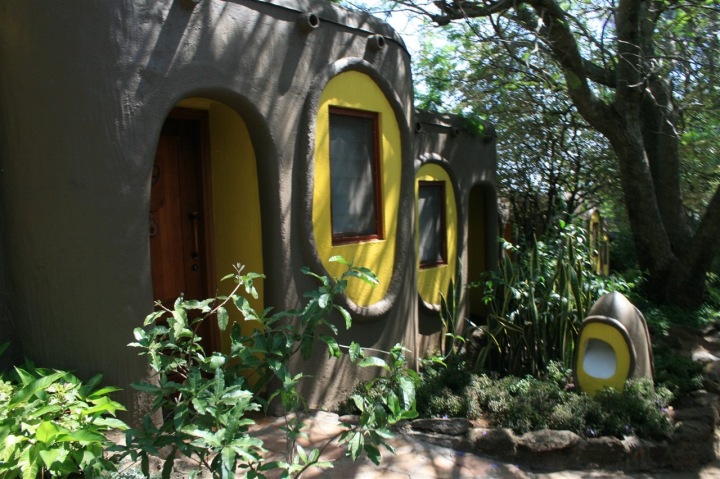 After some early afternoon pool lounging and lizard watching, it was time to head out on the late afternoon game drive. 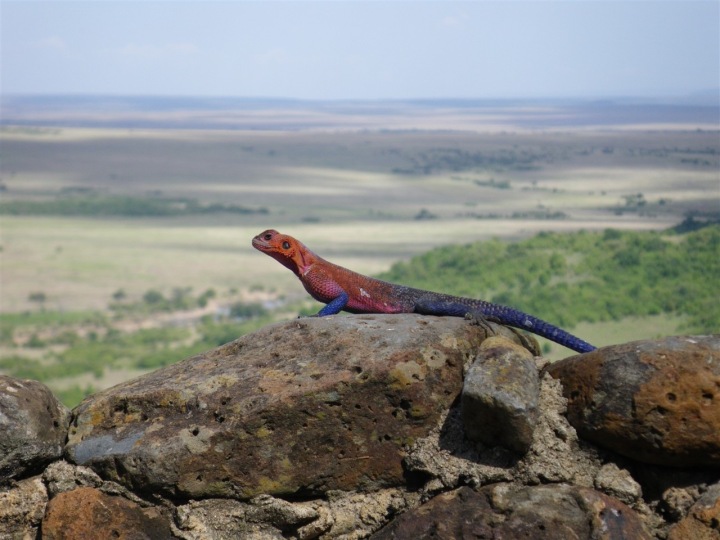 First up was a family of lions that was resting a bit after winning a battle with a hippo.  Poor hippy.  All I kept singing in my head was the “Hungry Hungry Hippo” song.  I know… I feel bad. 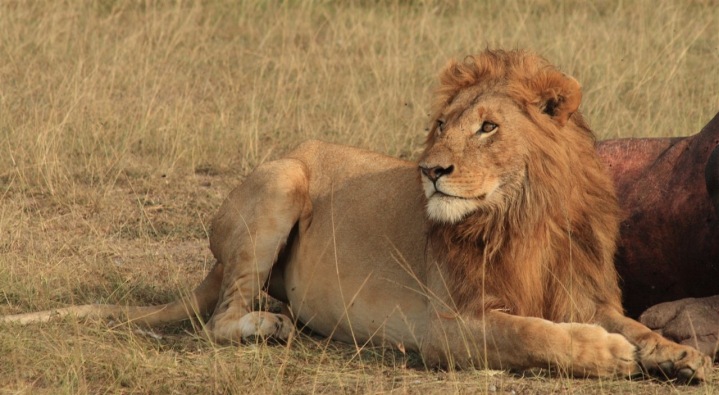 Because I’m nice, I’ll save you the pretty gory hippo shots…but I think I’ll put them together in a little Picasa album or something tomorrow to check out for those who want to (which, I’m guessing will be everyone).  They are pretty fascinating.

After the lions we saw some more giraffe, elephants, hyenas and quite a few different birds too.  However, we should talk size for a second.  Most would agree that I have a big…lens.  It gets the job done.  However, some people have bigger lenses.  And this person would be that some people.  However, the key isn’t that he has a bigger lens that I do – I can’t hold that against him.  I’d love that lens.  The fail-item is that he spent the time to camo-wrap the lens.

Seriously dude – you’re riding around in a massive white minivan.  Not like they’re not going to see that comin’. 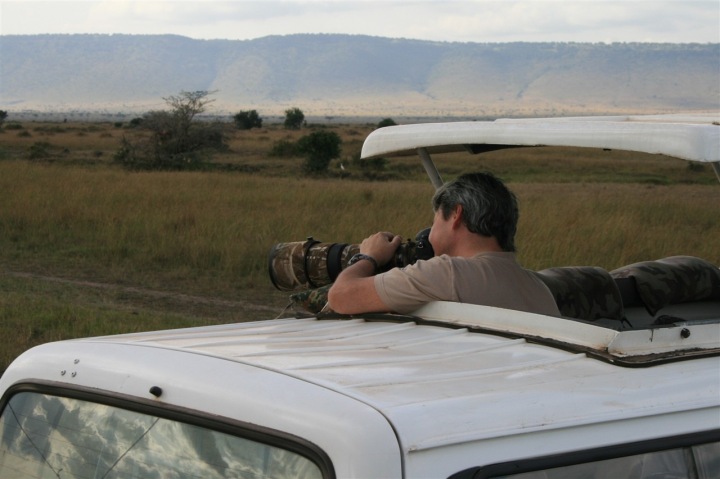 Anyway, I don’t need no camo lens, Mr. Giraffe doesn’t get scared, so I can get nice and close.  By now dusk is settling in though, so pics are a bit tougher to get right. 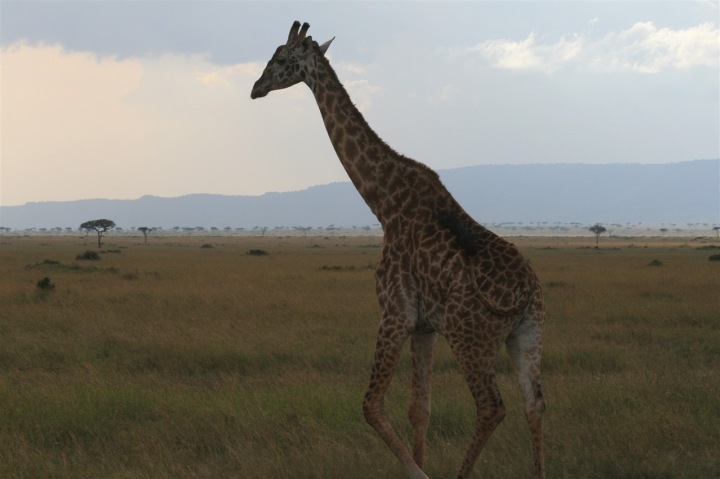 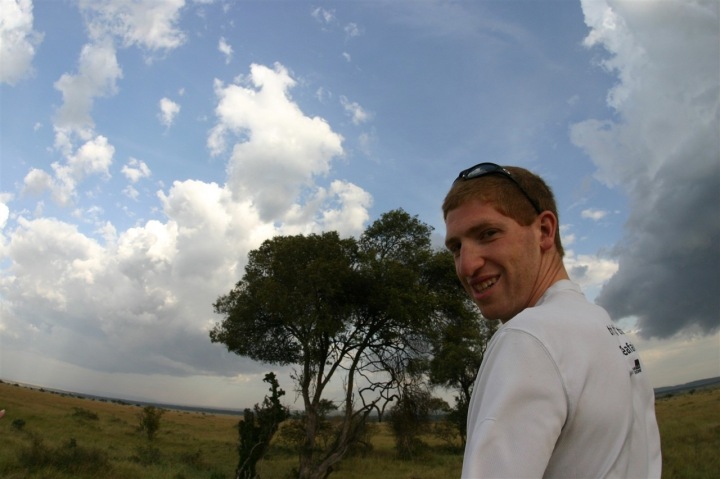 And then via the grapevine we heard news of a leopard in a tree, so we had to go check him out.  See, all the drivers out there have radios, and they communicate about sightings.  Although it turns out some drivers have a secret codeword system for different animals that are rare – such as Rhinos’, to avoid a rush of folks to the site.

Anyway…the leopard – the view is kinda rough, but you can make him out.  Certainly not as nice as yesterday’s leopard shots. 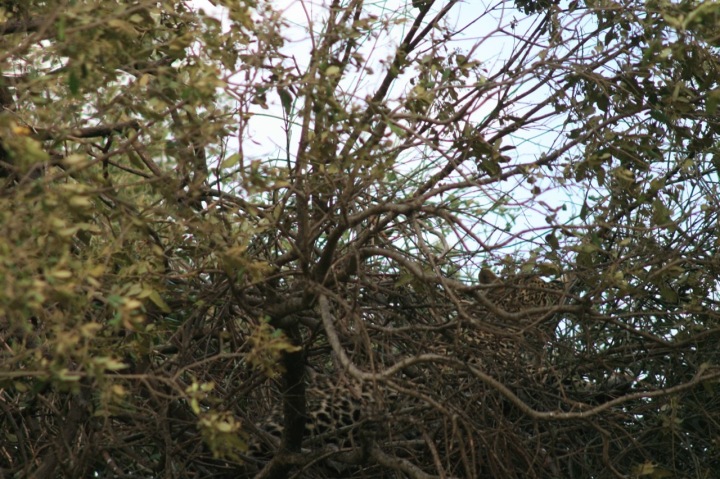 After that we noticed the tree right next to his had a small present dangling from it’s branches like a Christmas ornament.  See leopards follow the same guidelines that hikers do – always put your food in a tree to keep animals from getting it. 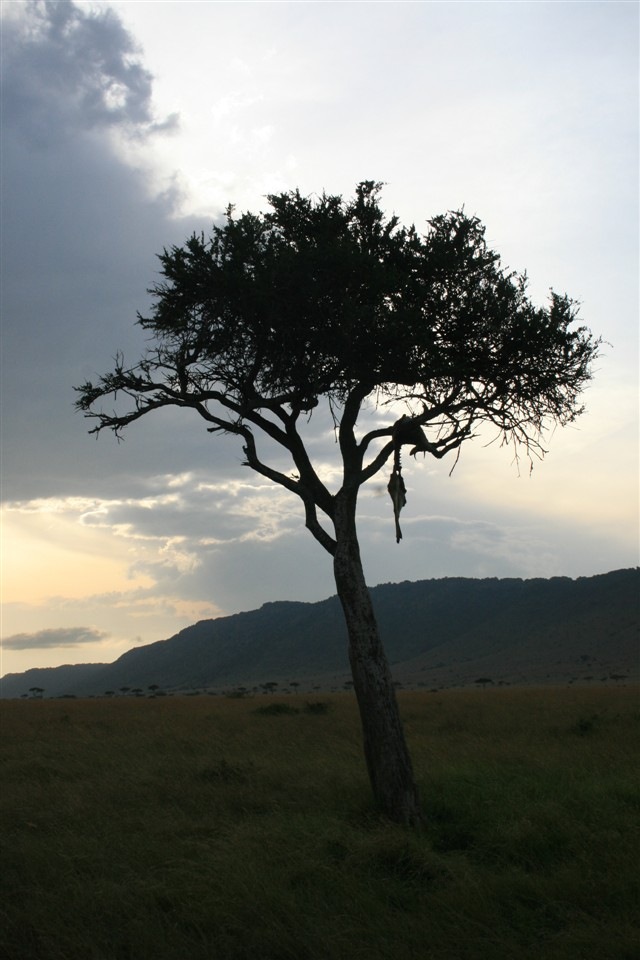 Yes, that’s a Gazelle up there…or rather what’s left of one. 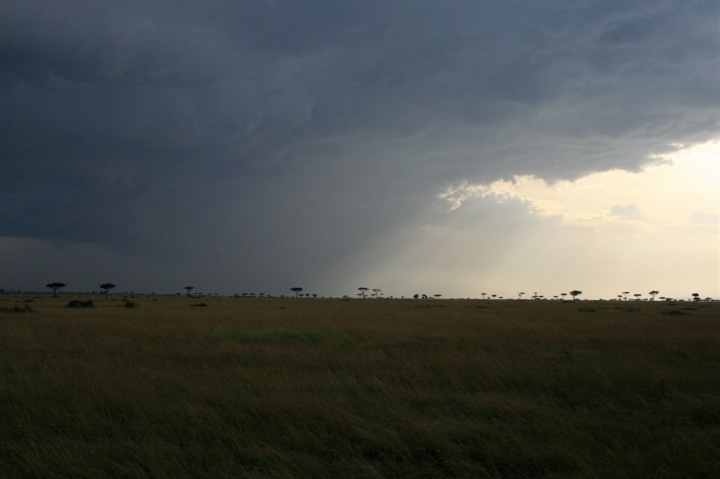 Rain!  Which was good, as it was the first rain they’ve had since October (we keep getting different answers on that from April to October, but the average seems to be October).

We battened down the hatches (put the cover on the jeep), and then more or less hightailed it back to camp. 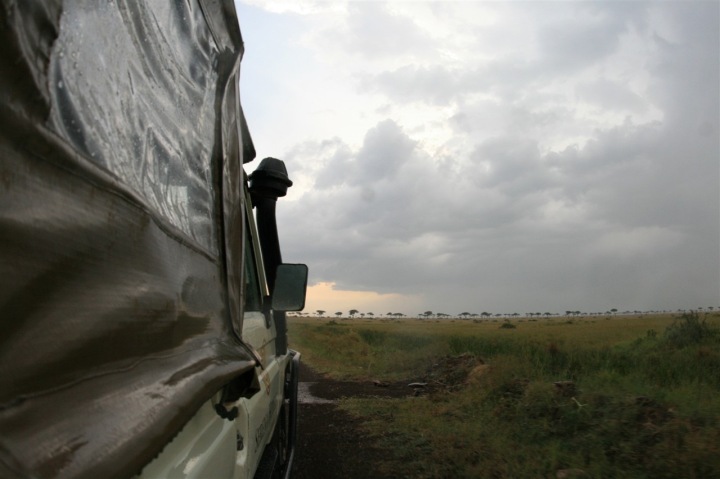 With that, we’ve got two more full days in Kenya at this camp before making the long trek back to the US.  But based on what we’ve seen here so far, we’ve got some incredible stuff awaiting us out there.  The wildlife it totally different here than on the other side of the country, at least from an ease of seeing it standpoint.  It’s awesome!