Despite being a redeye flight from Egypt that arrived at a potentially painful 4:10AM, it wasn’t too bad at all.  We were virtually first off the plane and then made like rabbits to the customs area to be able to fill out our on-arrival visa applications.  $50US later (required in US cash) and we were home free to wait for our luggage…and then burn a few hours.

(Side note: As I’m sitting here writing this now at night on a little deck overlooking brush…a bunch of birds just had a cow, which means something is out there…)

See while we arrived at Nairobi International Airport (NBO), our next flight actually took off out of Wilson Airport 3 hours later, which is a small regional airport about 20 mins away.  But that airport doesn’t open till 6AM, so we decided instead of waiting in the African dark, we’d wait at the baggage claim of NBO.

Anyway…soon time came so we headed our way over to the little airport and sunrise quickly followed. 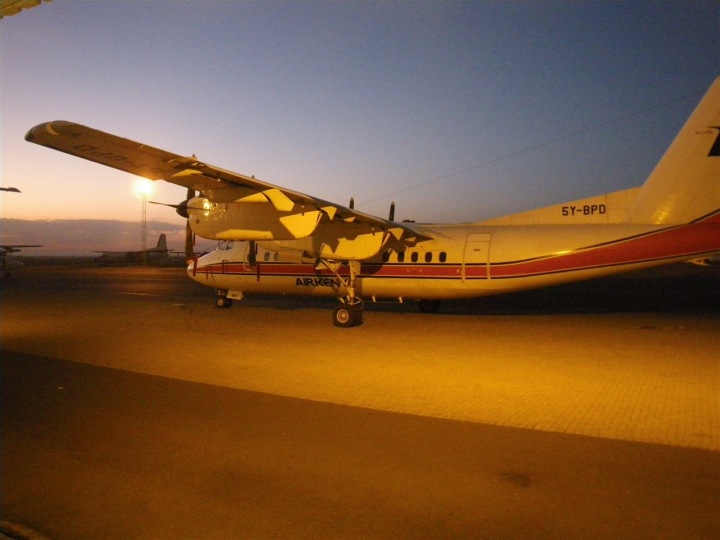 The only problem was that while the above looks like a nice plane…it turns out it wasn’t ours.  See imagine you’re going to your local non-commercial airport.  Like say your regional airport that services general aviation.  Now imagine there’s a ton of small buildings surrounding the runway.  Now imagine you have no idea which one houses the offices of the charter company that’s flying you.

However – we had one thing going for us.  Kenyans.  See – the little sign at the baggage claim at the international airport summed it up: “Smile.  You’re in Kenya”.  Hands down EVERY SINGLE PERSON we’ve meet has been friendly.  When we asked some random person at the airport how to find our company, they didn’t just shrug and give up.  Nope, they starting making phone calls, asking other people – who in turn helped us even more.  They even went as far as bringing us to the correct portion of the airport and then waiting with us until our plane arrived.  Amazing. 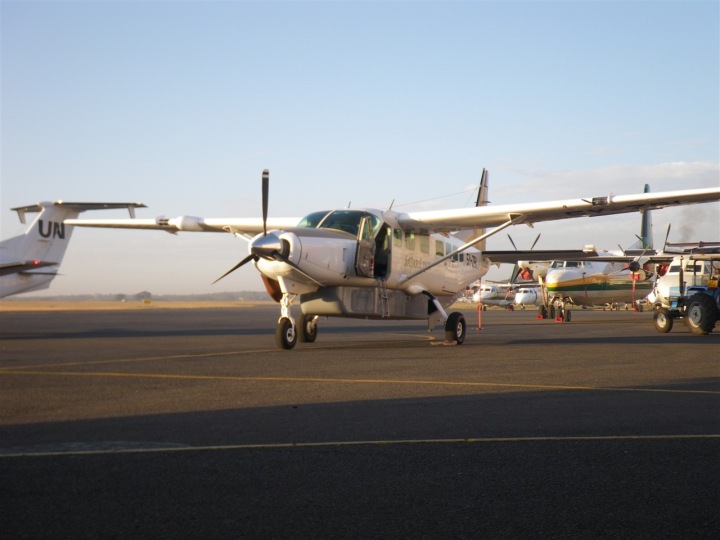 Soon us and four others boarded and flew off into the wild blue yonder. 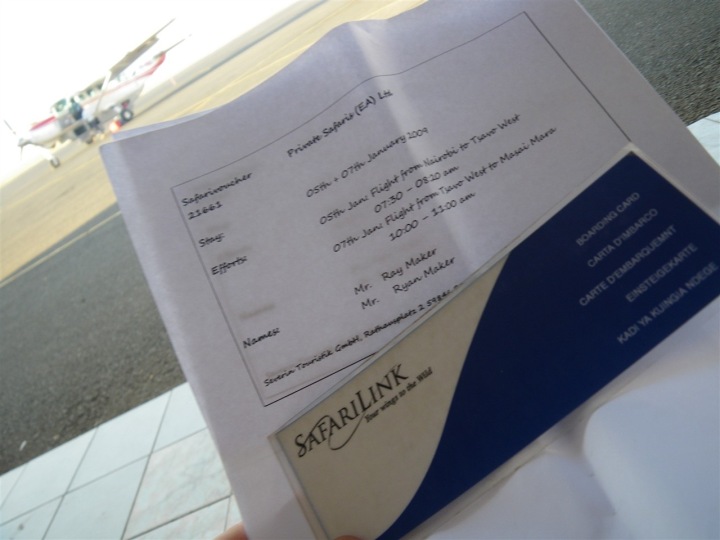 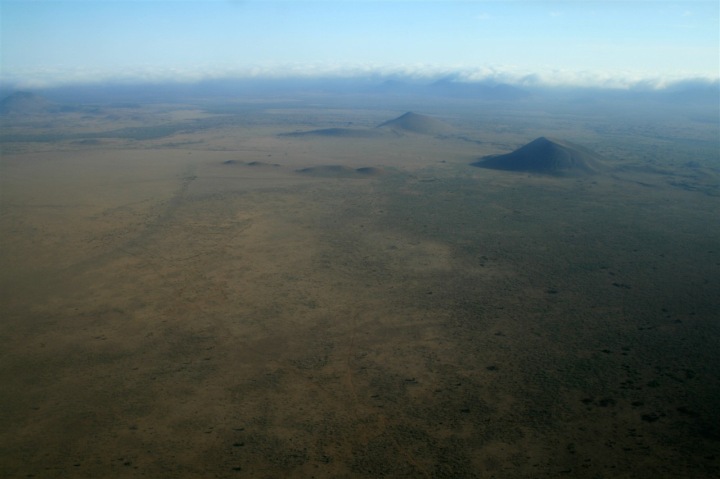 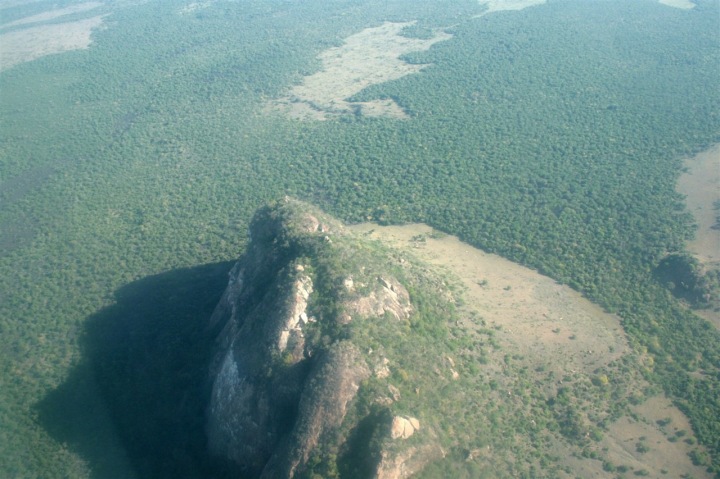 The landing strip was simply a grass patch in the middle of the vast African landscape.  They used piles of bones and rocks as runway markers. 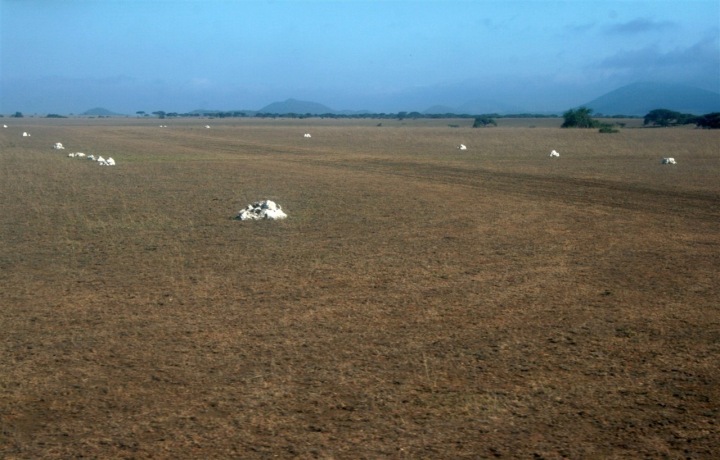 After about an hour and a stop along the way, we landed at our camp and they unloaded our stuff. 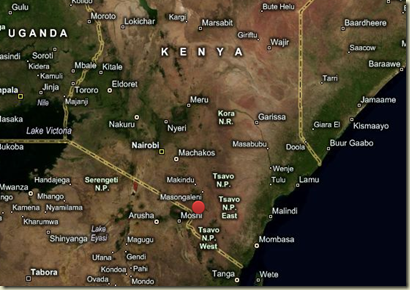 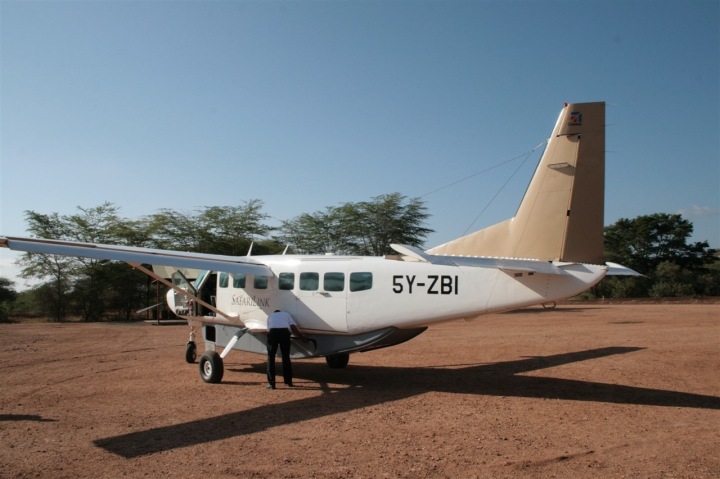 From there we drove for a few hours wandering around on our first ‘game drive’.  They call them that even though in the US that would typically mean a hunting expedition.  Nope, no hunting here – just looking for animals to see and take photos of.

Within a few minutes we saw tons of different animals: Giraffes, buffalo, gazelle, hippos and even a baby crocodile and an elephant. 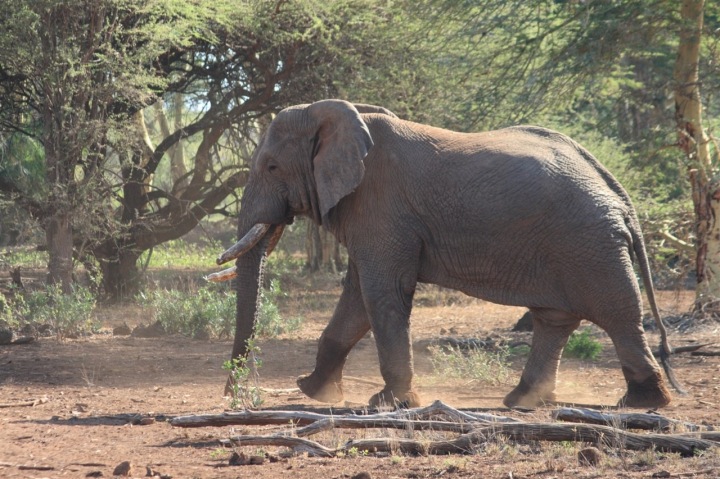 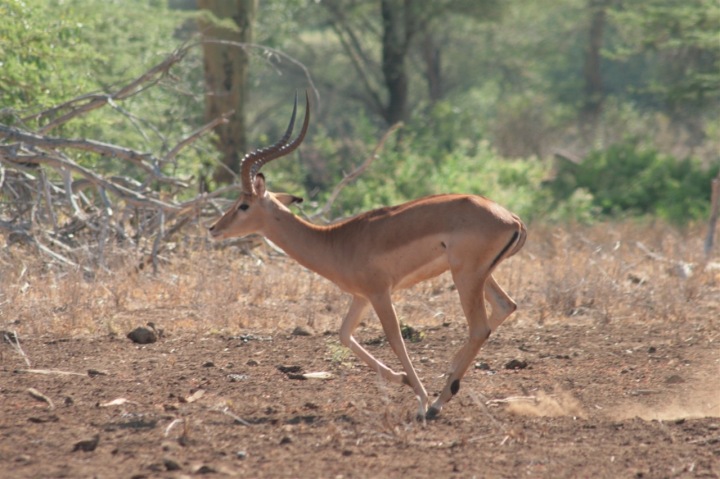 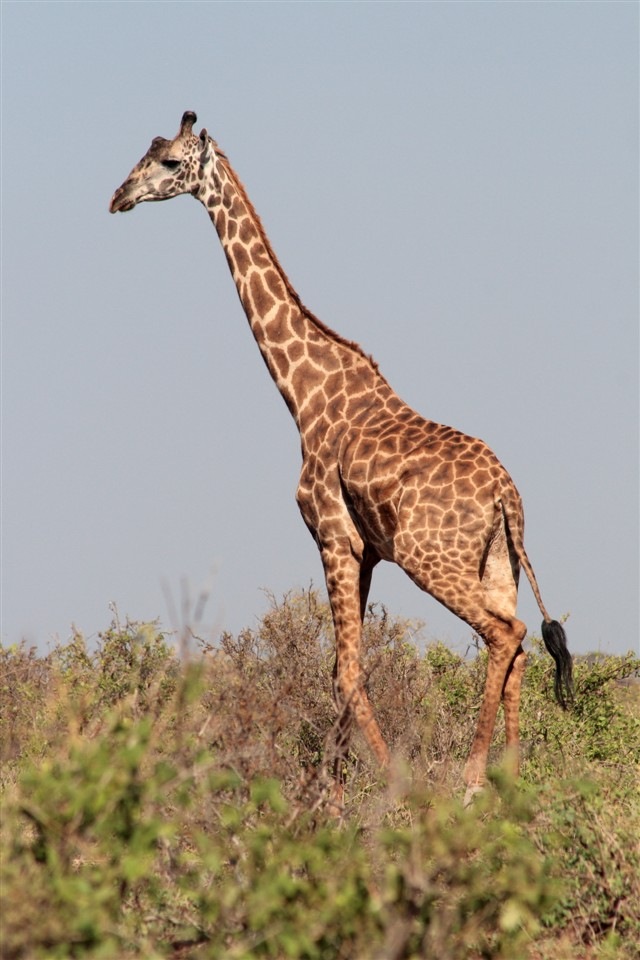 One of the advantages of this time of year is that it’s very dry, and thus the animals must move closer to water sources like rivers and water holes in order to drink…making them easier to find. 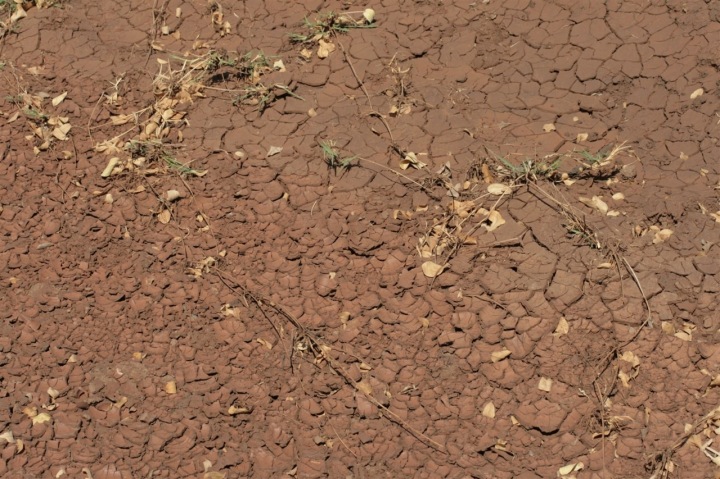 Eventually we make it to camp, and are shown the way to our little bungalow (Bungalow #16) – below.  At night, we have Maasai warrior escorts to/from the tents to keep various night creatures from consuming us.  Here’s him during the day. 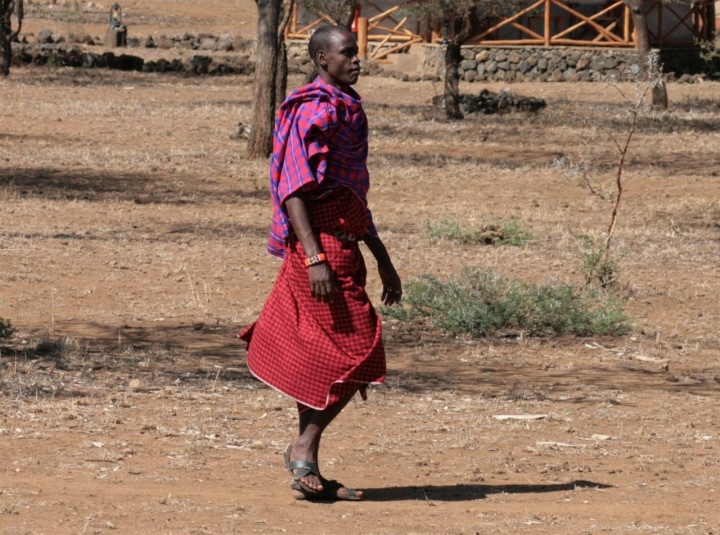 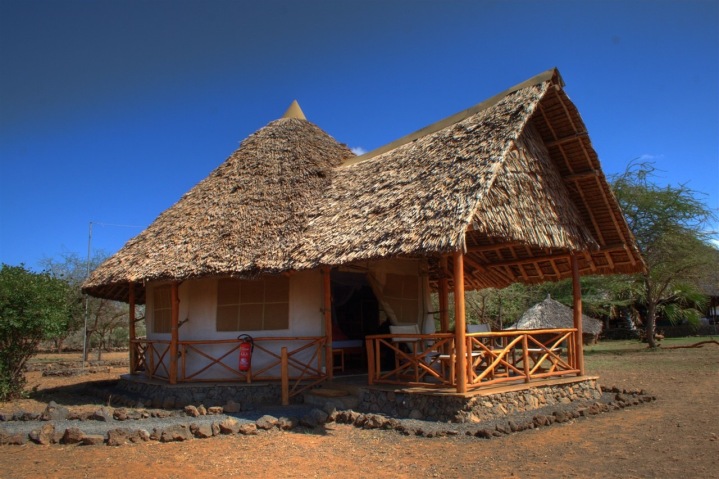 And then it’s time for lunch.  Woohoo!  No more buffets!  And it turns out the food is incredible.  Plus we have a view of literally hundreds of birds and whatever other wildlife decides to wander our way (giraffes are popular). 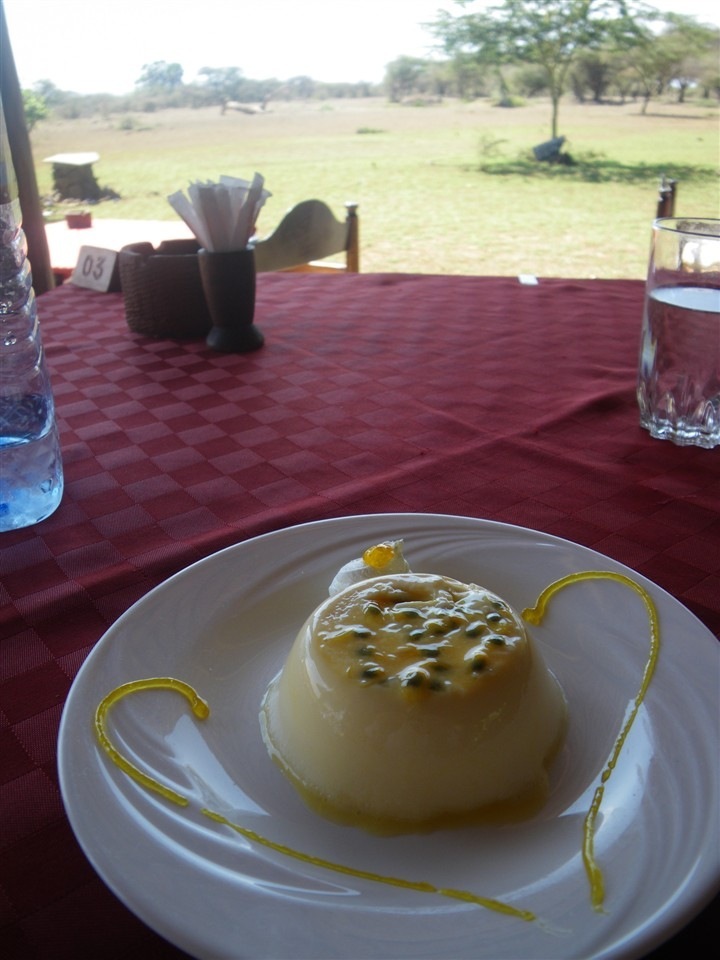 After lunch we sleep for a few hours as we’re exhausted, then it’s time for another ‘game drive’.  But before that I was sitting on the deck watching this family of warthogs wander around and play just a few feet in front of me.

A hilarious moment occurred when one of the baby warthogs tried to sneak up on a squirrel – Mission Impossible style.  Then the squirrel turned around and the little hog went scrambling. 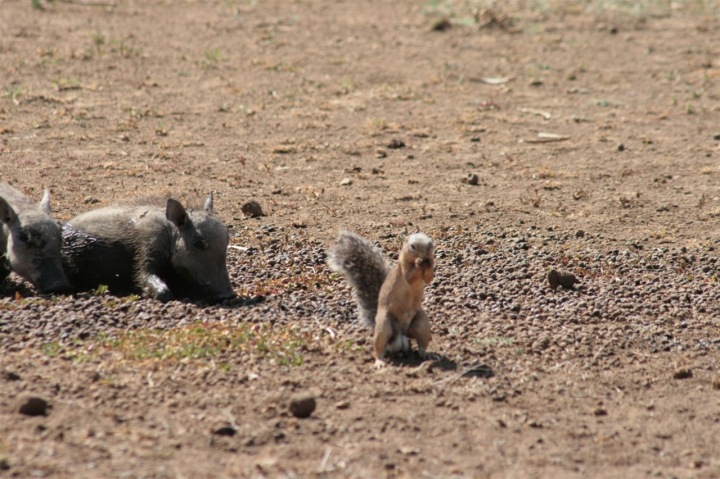 Meanwhile…one of the parents was doing something to a rock…. 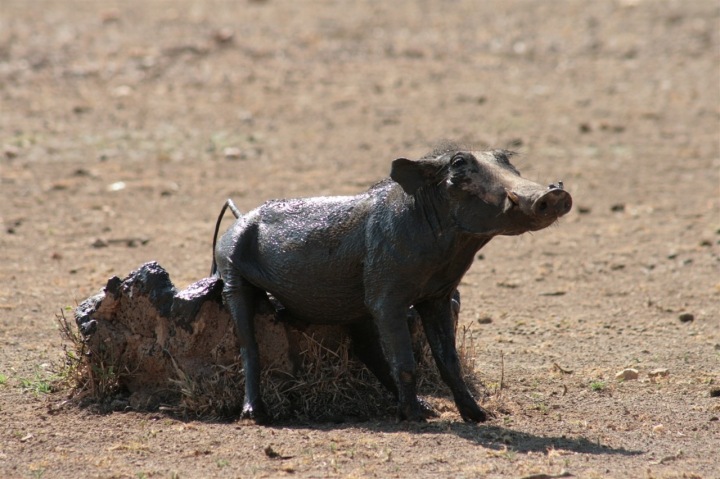 On the afternoon game drive we see some hippos, more crocs and more giraffes and a few monkeys (and then the ‘usual’ impala, gazelle, buffalo, zebra and other assorted ‘game’ creatures). 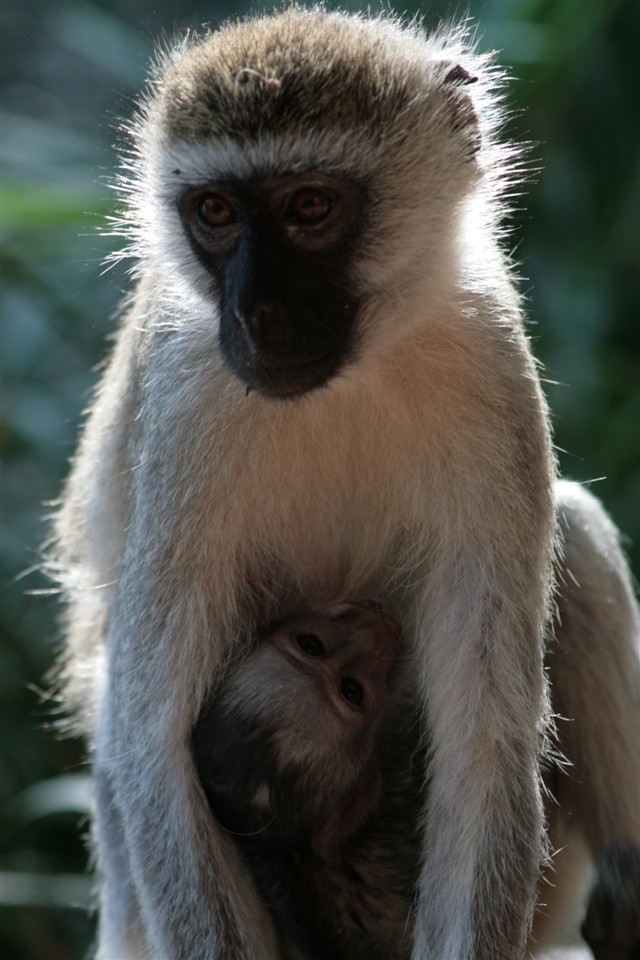 I saw the below sign…but did not find any sausage on the tree.  Liars. 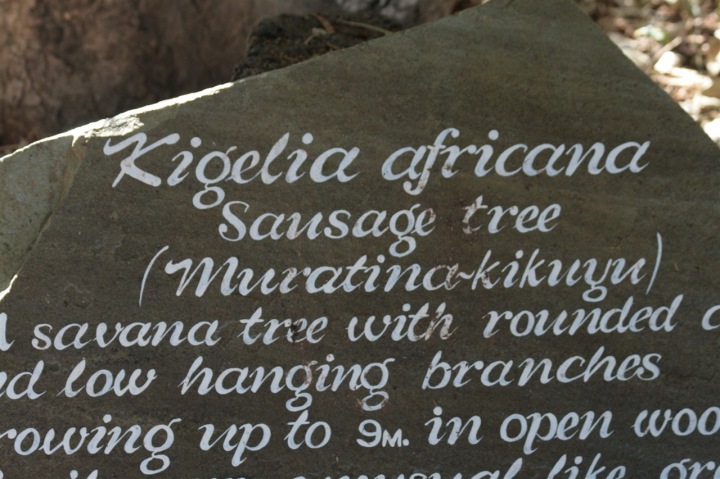 Vast areas of Kenya are National Parks (we at the moment are in Tsavo West National Park).  Certain portions are further guarded more closely, here’s one of the guards as we stopped near a watering hole.  She was super-friendly though – despite carrying a big gun. 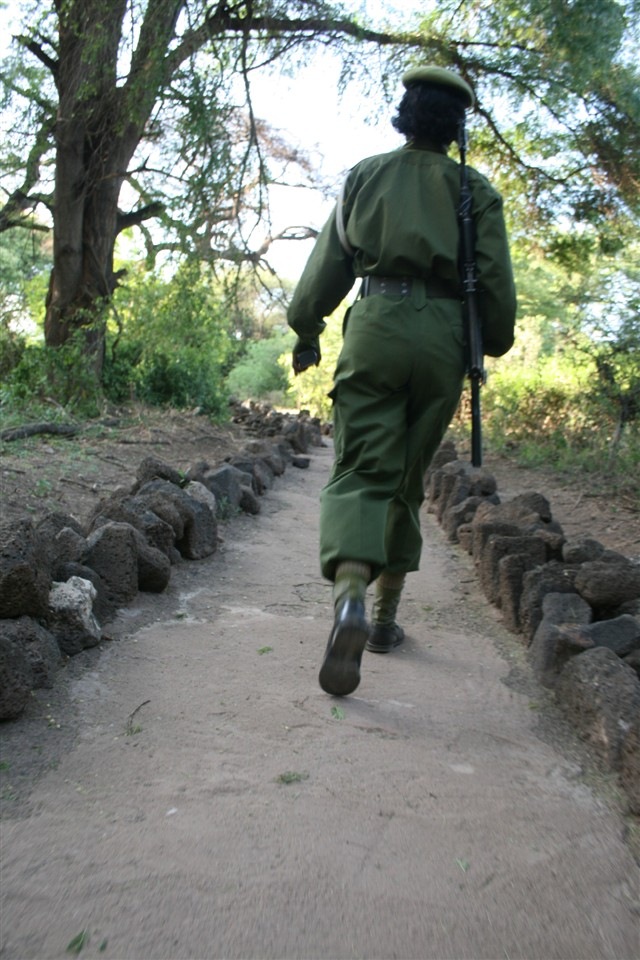 Hippos and Crocs don’t get along very well – despite living mere feet from each other in the water.  The scratches on this hippo are from croc attacks.  They play a tit for tat game near constantly. 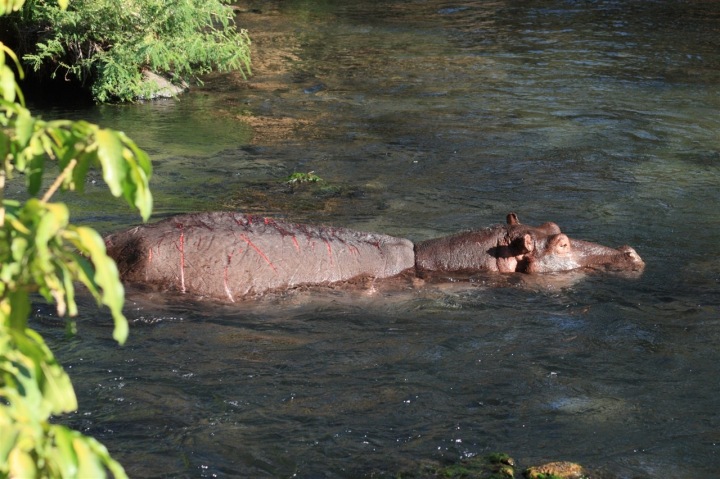 Lastly, we headed back to camp.  But first we stopped atop a ridge to have a few drinks and watch the sunset.  In the process, my brother attempts to explain to the guide where Texas is.  The guide was curious about that and it’s relation geographically to Brazil (he’s a big soccer fan). 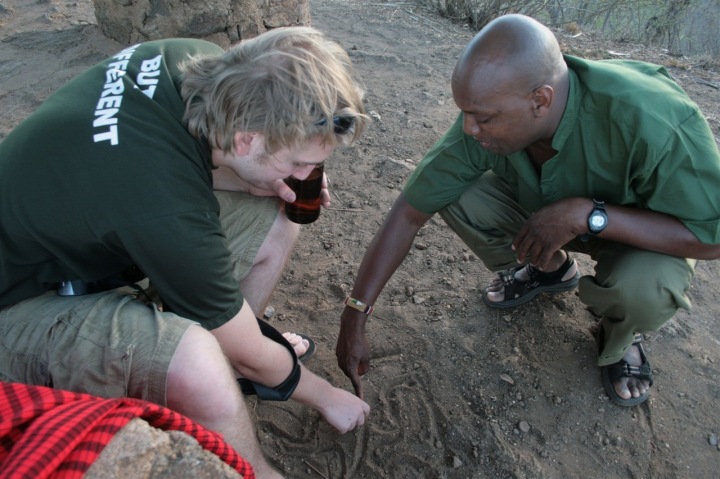 Here’s sunset from a hilltop overlooking the plains and off in the distance a clouded over Mt. Kilimanjaro. 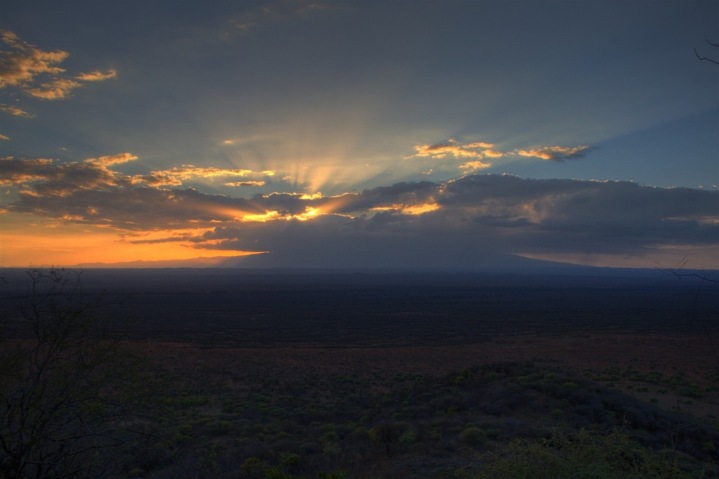 And finally…the silhouette of a giraffe on a nearby ridgeline. 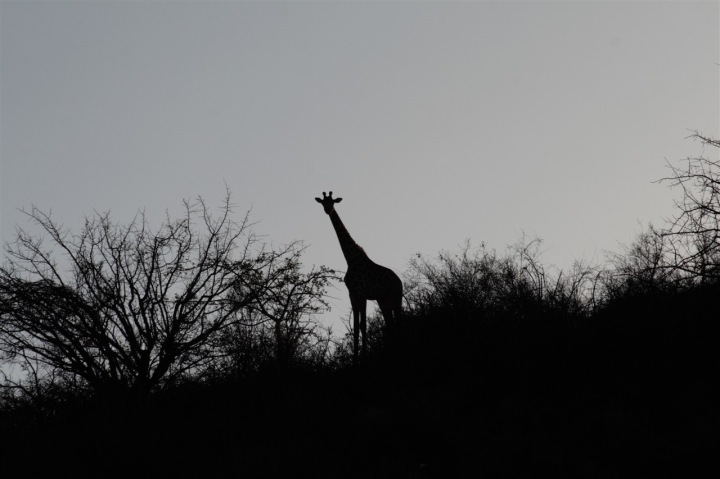