The day started out more or less like any of the previous days in Kenya.  We’d get up before dawn (6AM) and shuffle our way to the Land Rover ready to begin the the day.  Speaking of which, here’s what a typical day on most ‘safari’ vacations look like:

Anyway, back to the day at hand. 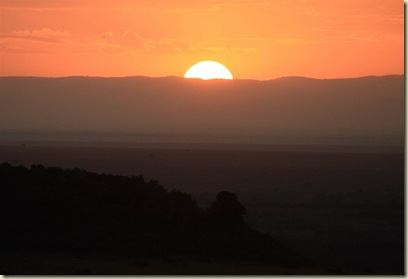 We spotted a hot air balloon heading across the valley as well.  They offered us the opportunity to go up in it, but we declined…given it was $450 per person!  Holy crap!

Soon we stumbled on some hyenas, a small family actually.  Two little baby pups as well. 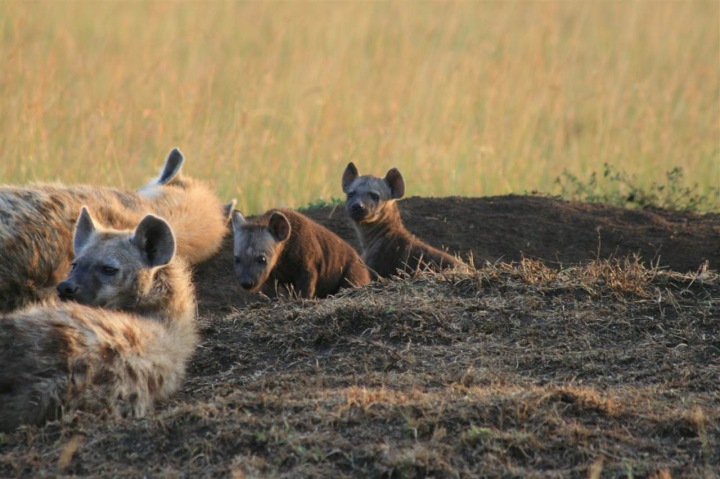 Interestingly, we found that hyenas actually consume and break down quite a bit of bone during the scavenging process.  Thus their crap is rather white in color.  See, sometimes this blog is full of crap. 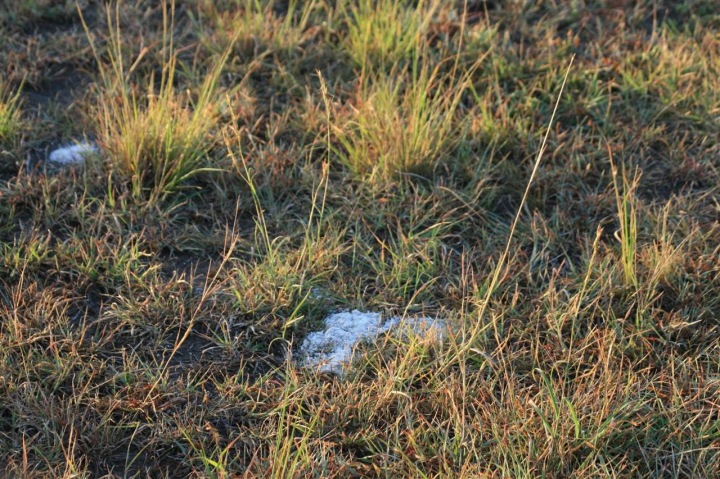 We continued to see a ton of birds on the journey, and this one was perched atop one of the sparsely scattered trees. 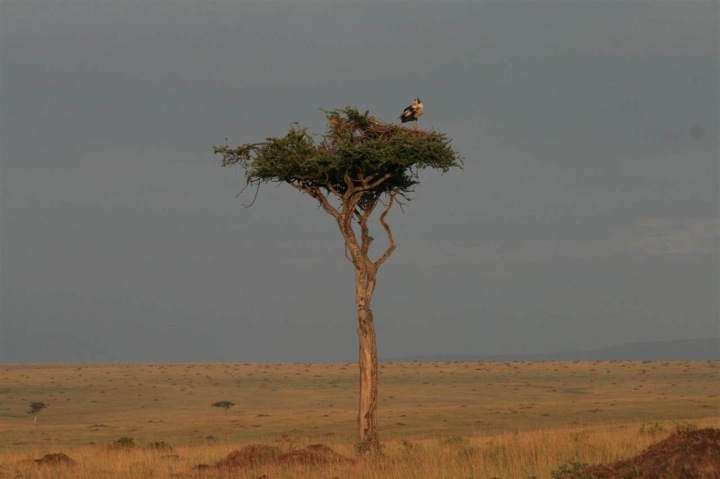 And then we saw this dude takeoff right in front of us. 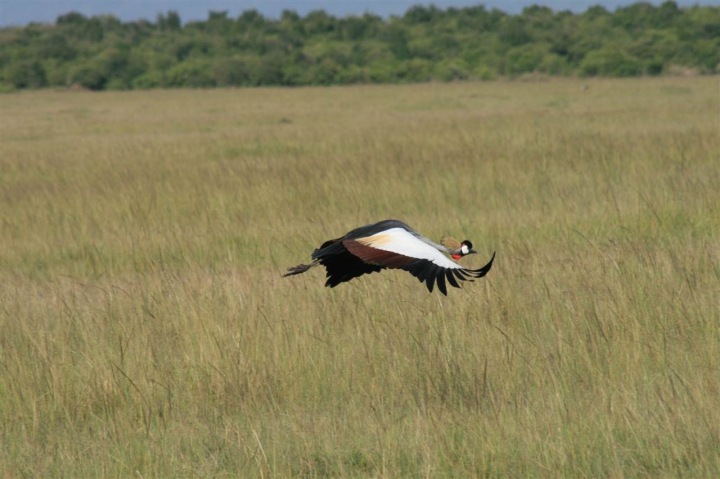 In the process of checking out the birds I finally found a creative place to put Mr. Spot.  He seems very finicky down here in Kenya, requiring the utmost care in ensuring he has an unobstructed view of the sky.  He has been working though most of the time, displaying our location as he sees fit. 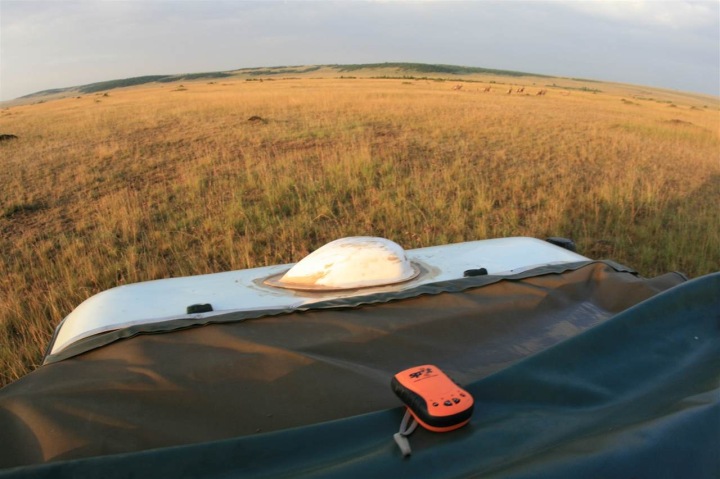 Soon our driver noticed a white object off in the distance.  Like playing a game of Where’s Waldo – it was a simple matter of what didn’t fit it.  Upon closer inspection…it was a Cheetah! Woohoo!  This was our first time seeing one.  Plus, he was chillin’ next to some waterbuck, so we were hoping he might go out catching breakfast. 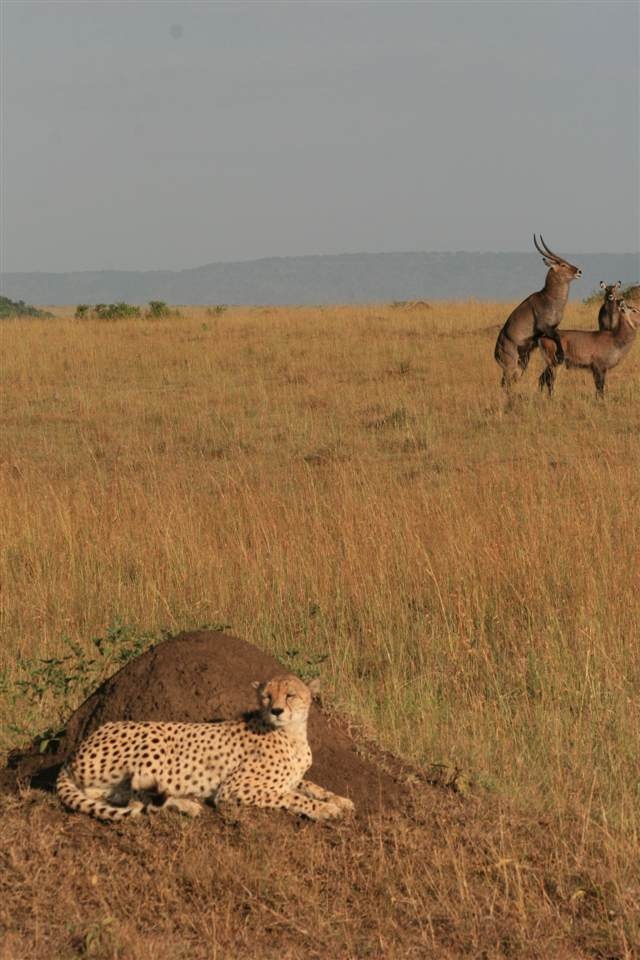 Of course, the first sign that the waterbuck didn’t really care much might be in the activity they were partaking when the cheetah wasn’t looking.  Apparently some Barry White was tuned in. 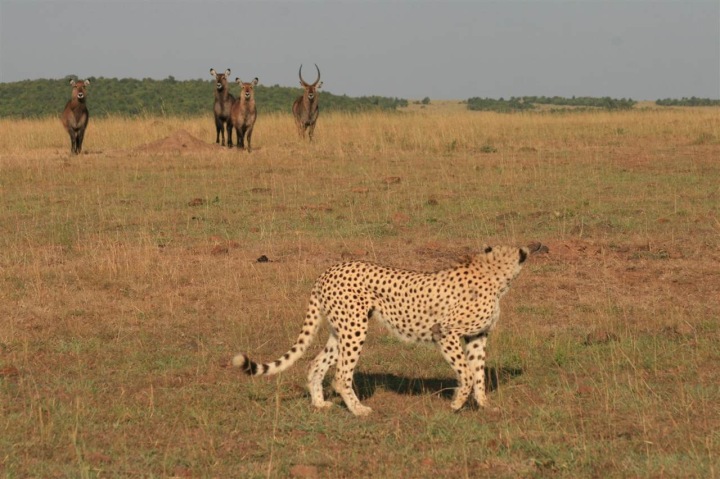 As it turns out, he was more afraid of the waterbuck than they were of him.  In fact, they actually chased him away.  At one point we thought we might see some sweet confrontation (really, it’s like watching car races, you just watch for the crashes).  But basically the waterbuck charged at the cheetah and it wimped out (one could insert a rather cat-like joke here…).  Interestingly, they actually followed suit for a while.  Clearly the waterbuck aren’t the smartest mammals in town.  I have a general policy to run *away* from any cats larger than me. 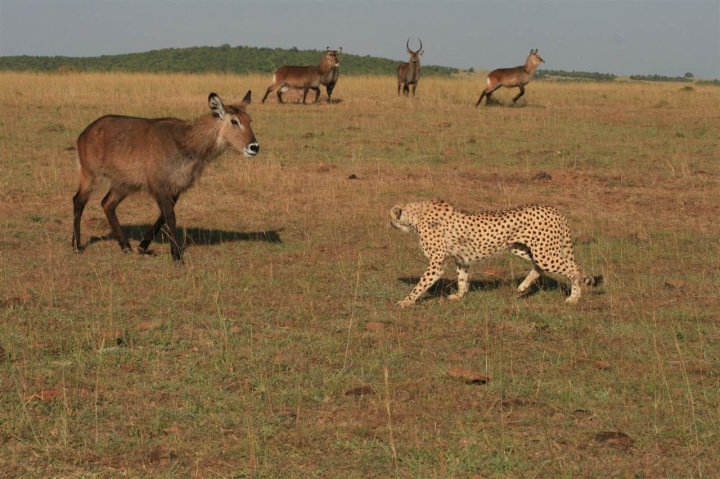 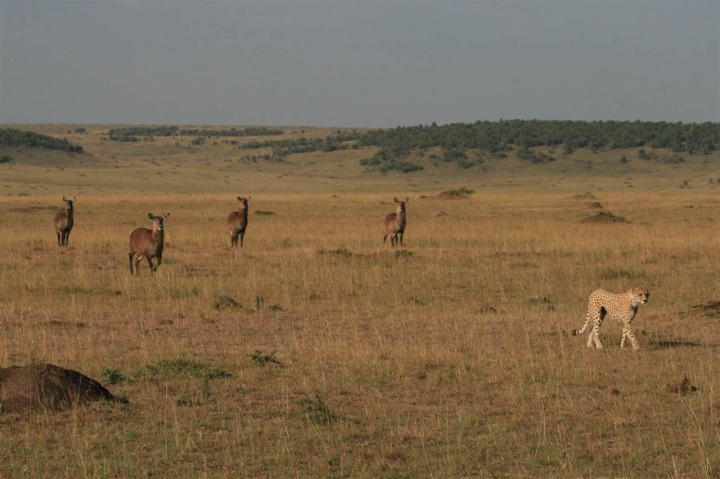 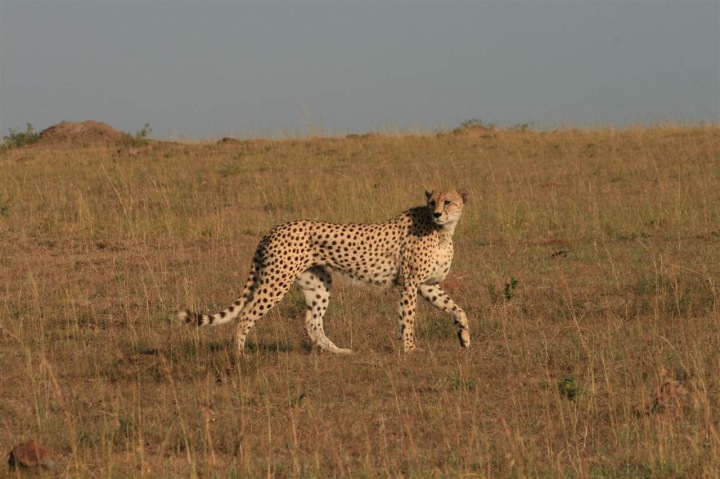 After a while, Mr. Cheetah went back to scoping out the breakfast options and we carried on. 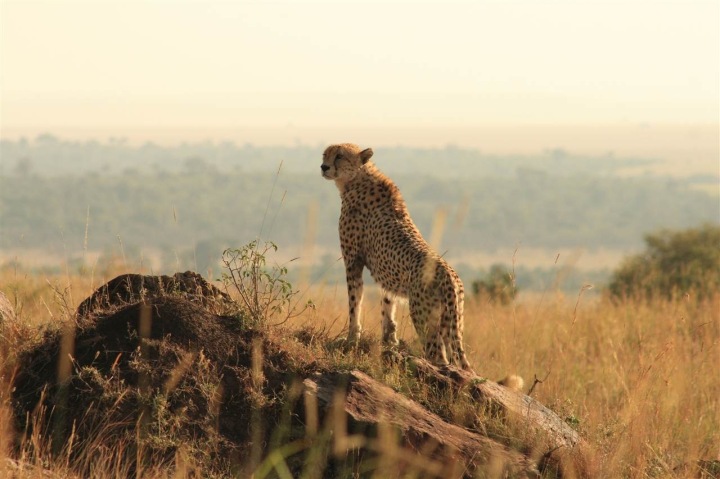 However, our cat trip wasn’t quite finished.  Just around the corner we found a family of lions contemplating their breakfast options as well. But they seemed like they wanted to sleep a bit more. 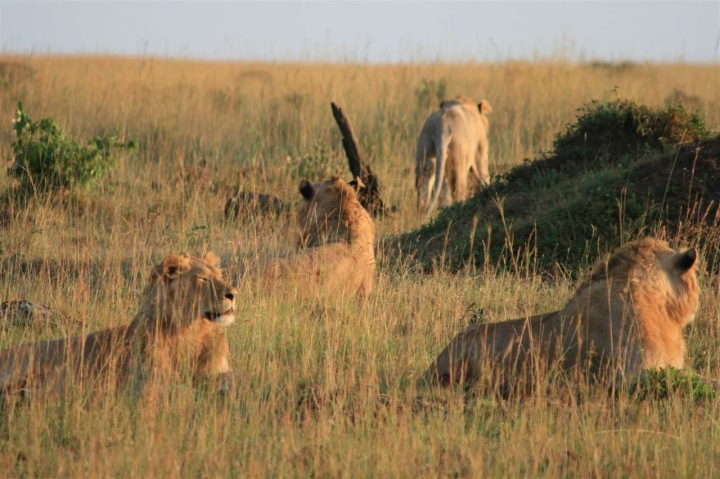 Along the journey we also caught these Zebras watching for any sign of trouble.  Although, like the waterbuck, the background gazelles are just gettin’ down with things. 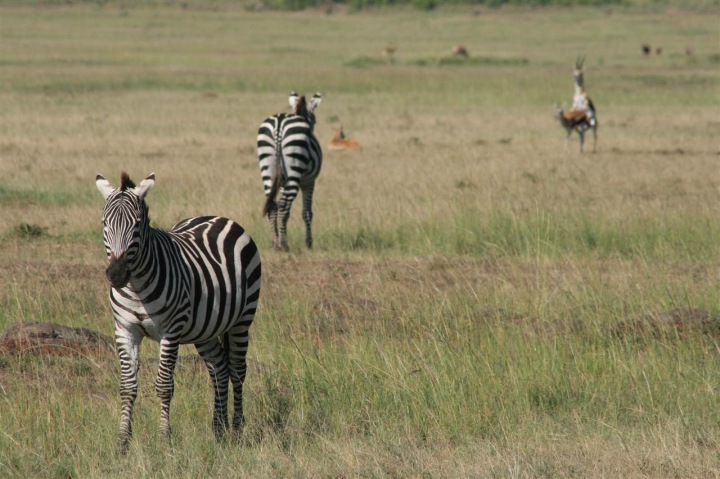 After a while our guide explained to us that we were going to go down by the river and meet up with a Masai warrior to see how they live.  He explained that they were going to offer us fresh cows milk with a bit of blood from a sacrificed cow, and they it would be rude to decline.

As we got out of the car, he said if anything went wrong to just shout his name.  Uhh…right.

So, we followed our dude into the bushes. 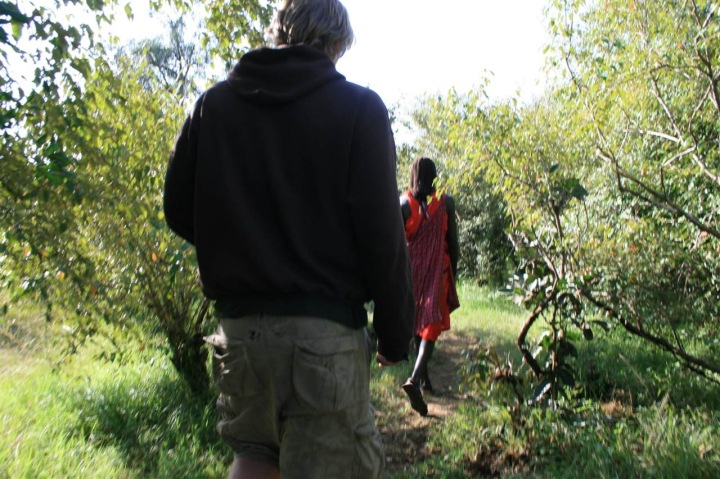 And that’s where we were rather surprised.  First, he handed us a chilled towel.  Really?  They have chilled towels?

Then we continued deeper into the woods before we came upon this little setup. 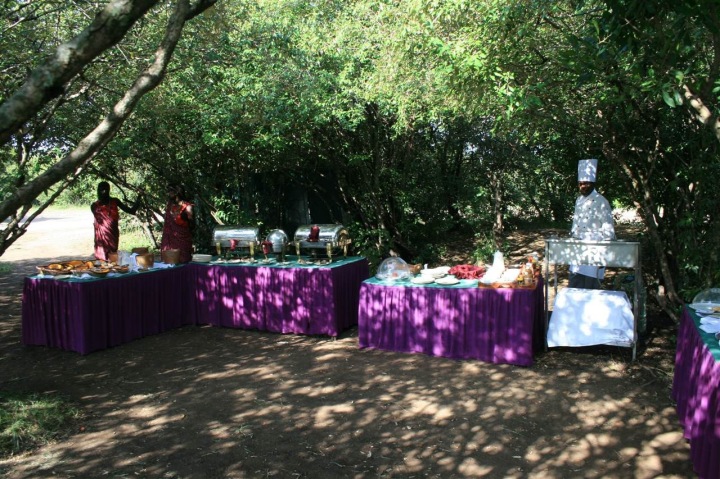 Hmm…these warriors apparently live the life!  We were then presented our table…overlooking the Masai River and a ton of hippos (much happier hippos than the one we found yesterday). 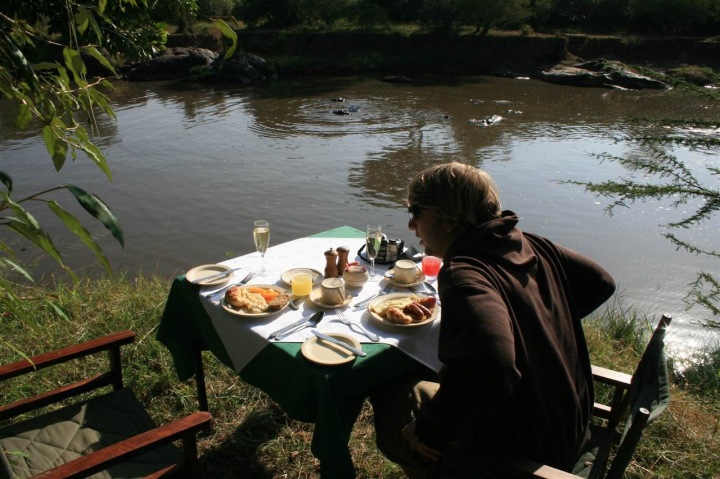 So that was pretty sweet!  Breakfast overlooking the hippo’s – and no blood involved!  Nice.

After breakfast we headed back up towards the lodge.  On the way we passed some giraffes.  To answer Donald’s question yesterday about what sounds they make…it’s really none.  The only sounds they *might* make is this very faint sneezing sound if they think lions are around. 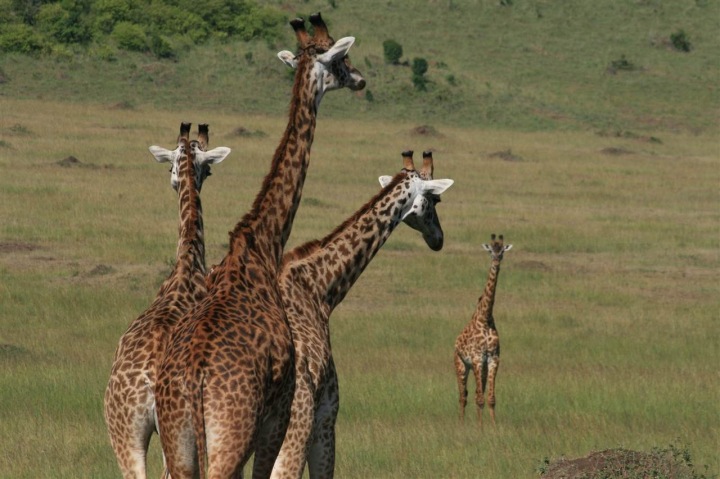 However, one sound they can generate is a solid thwak sound when they ‘neck’.  Necking is their form of fighting…it’s also used in giraffe male-male ‘relationships’ (you didn’t expect that one…did ya?).  And these two were going at it, taking huge swings with their necks at each other.  It was surprisingly loud, like the muffled sound of two 2×4’s being swung against each other.

I think the third giraffe was the referee.  He kept following them around just a few feet behind, getting good views of the action. 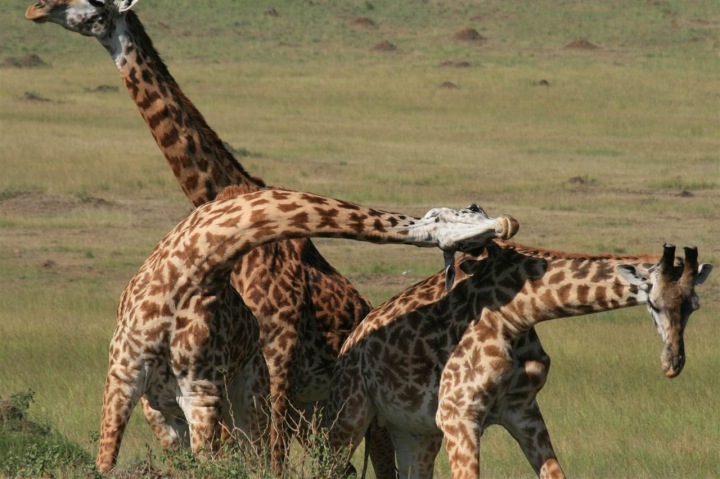 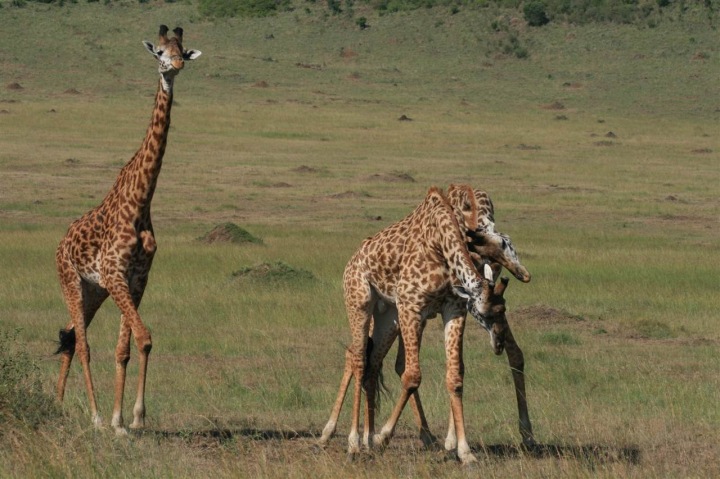 After that, it was time to hit the pool.  I did some solid lounging/reading and occasional napping.  It’s the hard life.

We went out again at night, but didn’t see too much as we were wandering around aimlessly again looking for the Rhino.  Did see an Egyptian Goose (below), a jackal, and the lions hanging out next to the Hippo carcass still. 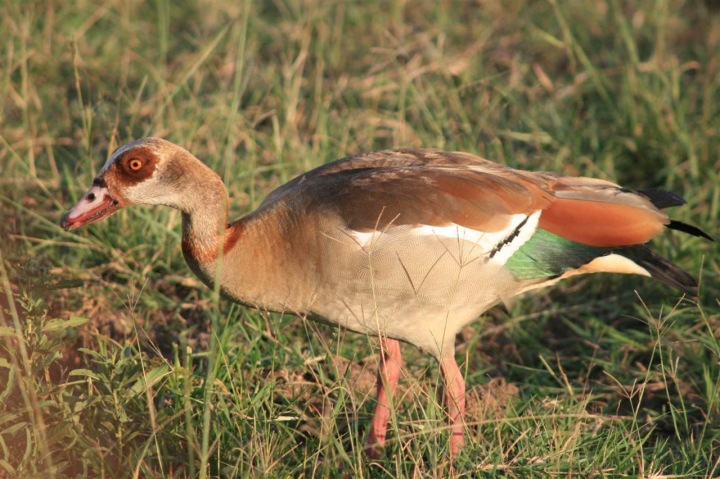 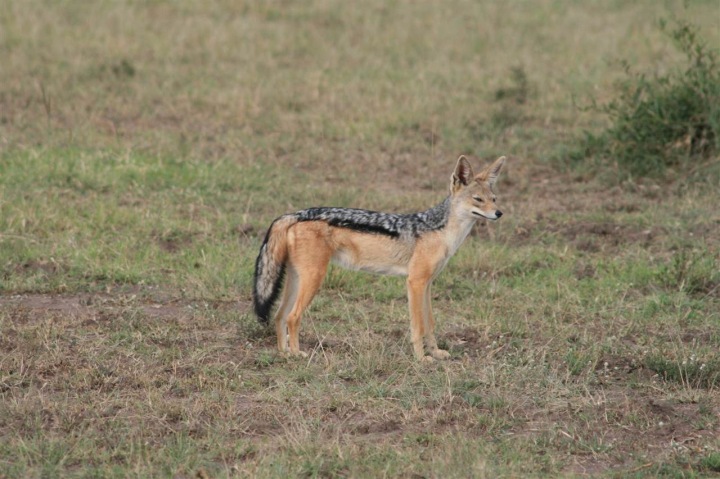 Oh…and we saw sunset too. 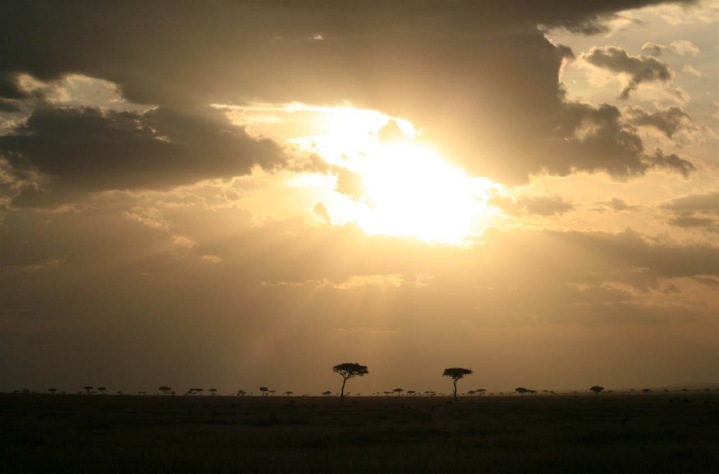