Thoughts on the Skulpt Chisel 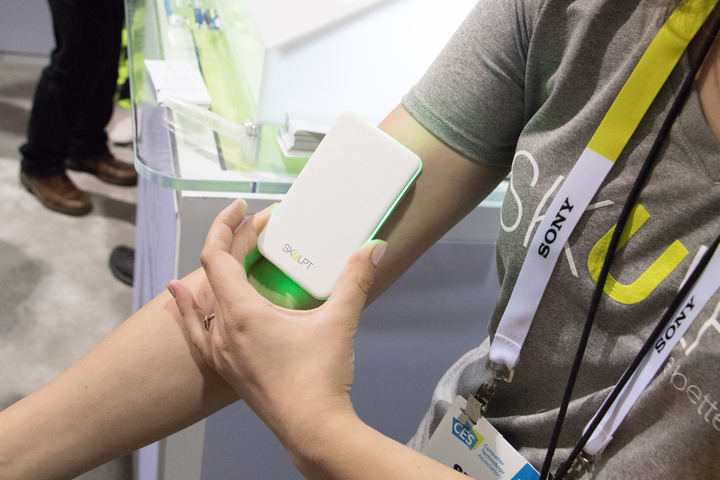 I ran across the folks from Skulpt at CES this morning. You may recall Skulpt from a previous brief mention here a couple of years ago. That first generation device was a success and now they are out promoting their newer improved device, now called the Skulpt Chisel. Having already met their initial Indiegogo goal they know the demand exists and they were here at CES showing off the Chisel even as their crowdfunding campaign winds down in its final hours over the next couple of days.

The Skulpt products follow the theory of tracking results, not activity. They claim to do this by individually measuring the fat percentage and muscle quality of up to 24 major muscles (think abs, quads, hammys, calves, etc). 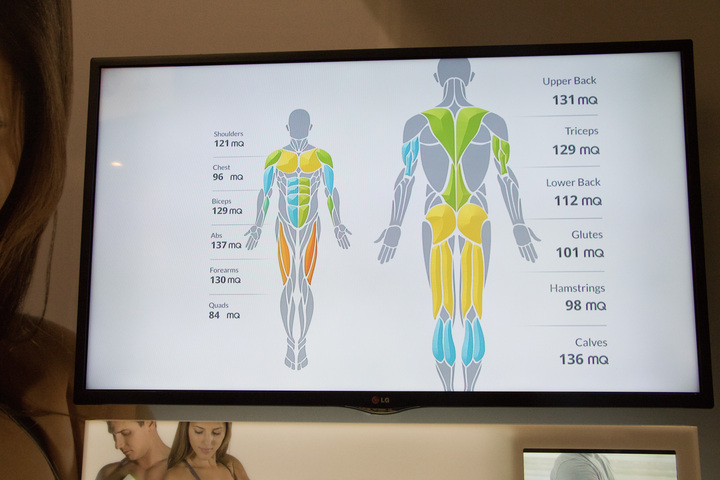 Skulpt can also give you an overall body fat percentage by averaging readings on just the triceps, abs, and quads. In talking to the Skulpt staff they stand solidly behind the accuracy and reliability of their proprietary electrical impedance myography technology. Their EIM method sends tiny amounts of current through your muscle and fat tissues to come up with various measurements and graphic representations of your muscle fitness. The graphic below shows their claims of performance compared to the other methods in use. They still bow to the gold standards of dual energy x-ray absorptiometry, but as they point out, they are a lot more convenient and far less expensive for the average home user. And of course they are a lot less painful than a properly administered skin pinch test. 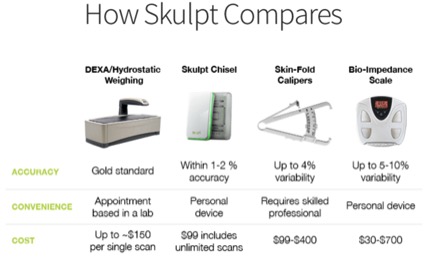 I suspect that we don’t have many pure body-builder types here on the blog, but I think the real value to the average DCR reader would be the ability to measure the symmetry, or lack thereof, between your right and left legs for instance. Or, extreme imbalances between your front and back leg muscles as another example. And of course we all would be interested in how well our abs are measuring up. 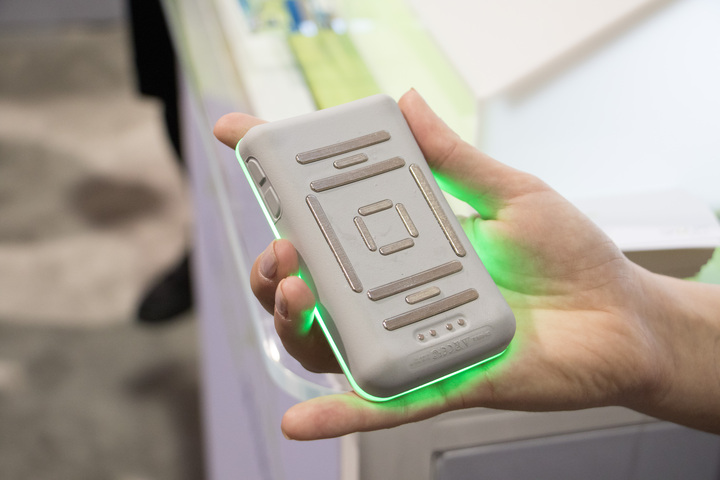 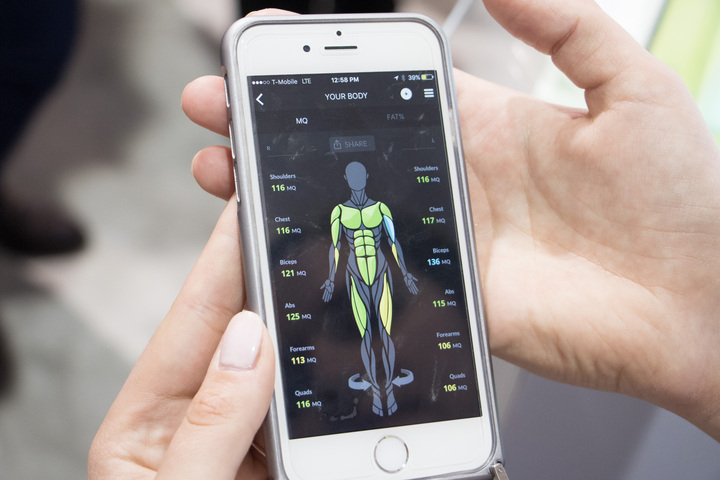 Their app not only remotely controls the device but also gives you detailed progress charts and a body heat map showing strongest muscles and those that need work.  This is a bit of a change from the previous generation device where the device also had a screen on it, giving instructions there as well.  Also note that you can indeed share a single device with multiple people (so you and your partner), though it will require a bit of juggling re-pairing the device to your own phone app each time.

Overall an interesting fitness device; but keep in mind their special $99 Indigogo price ends on Friday.  The company says they’re on track to ship devices in March of this year.

January 9, 2016 Update:  Based on some feedback from the comments below, I dropped back by the booth during the closing hours of CES to try the Skulpt out on myself, kind of a guinea pig death wish given the extreme exhausted state of all the booth personnel.  Alas, it was truly painless, though a bit chilly with the cold water spritz that they insist must be repeated every time you do a test.  And it was rock-stupid simple; as in really impossible to mess up, given the app’s step-by-step graphic instructions on proper muscle placement.

I only took readings from my bicep as I really didn’t want to partially disrobe there under the bright lights.  I was a bit disappointed to see that the Skulpt rated me as somewhat less than Athletic, but at least I was well above Average. 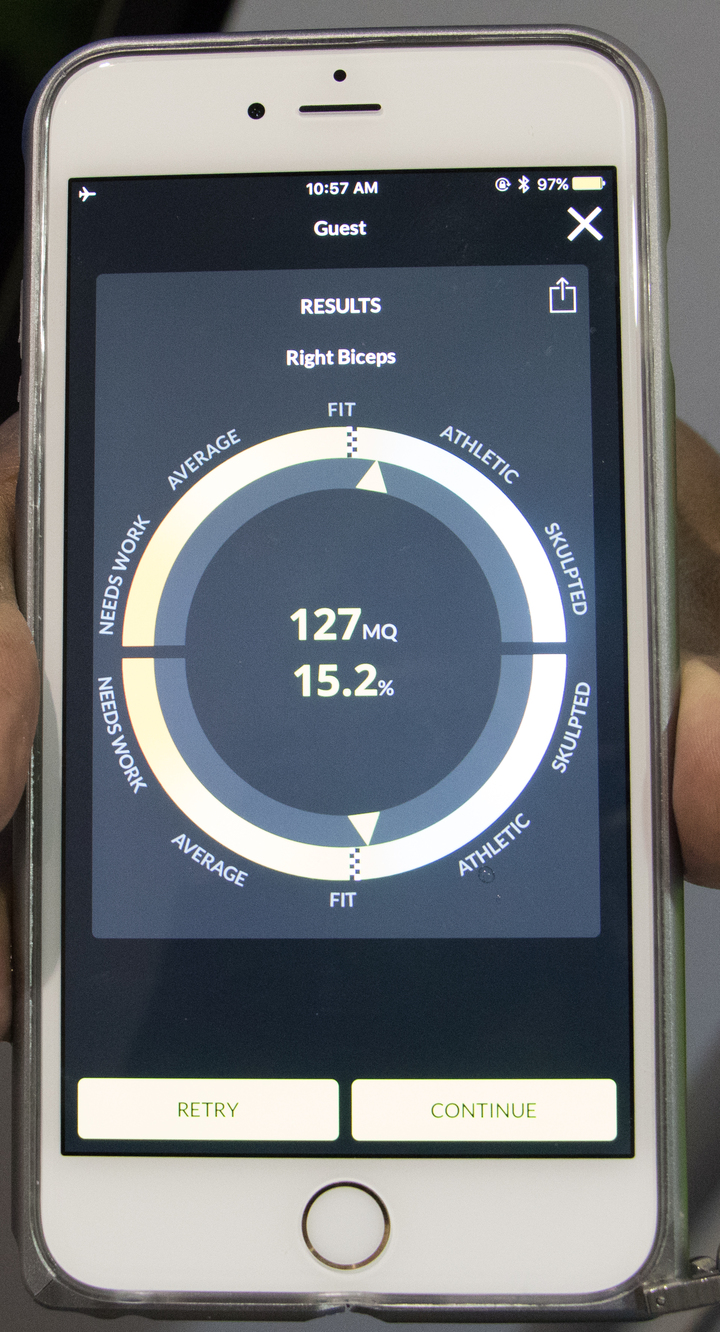 But, just for yucks we did a second test, all of 2 minutes later, and my Muscle Quality somehow mysteriously dropped by 3 points; but as a consolation prize I also apparently reduced my body fat percentage by 1.4%. 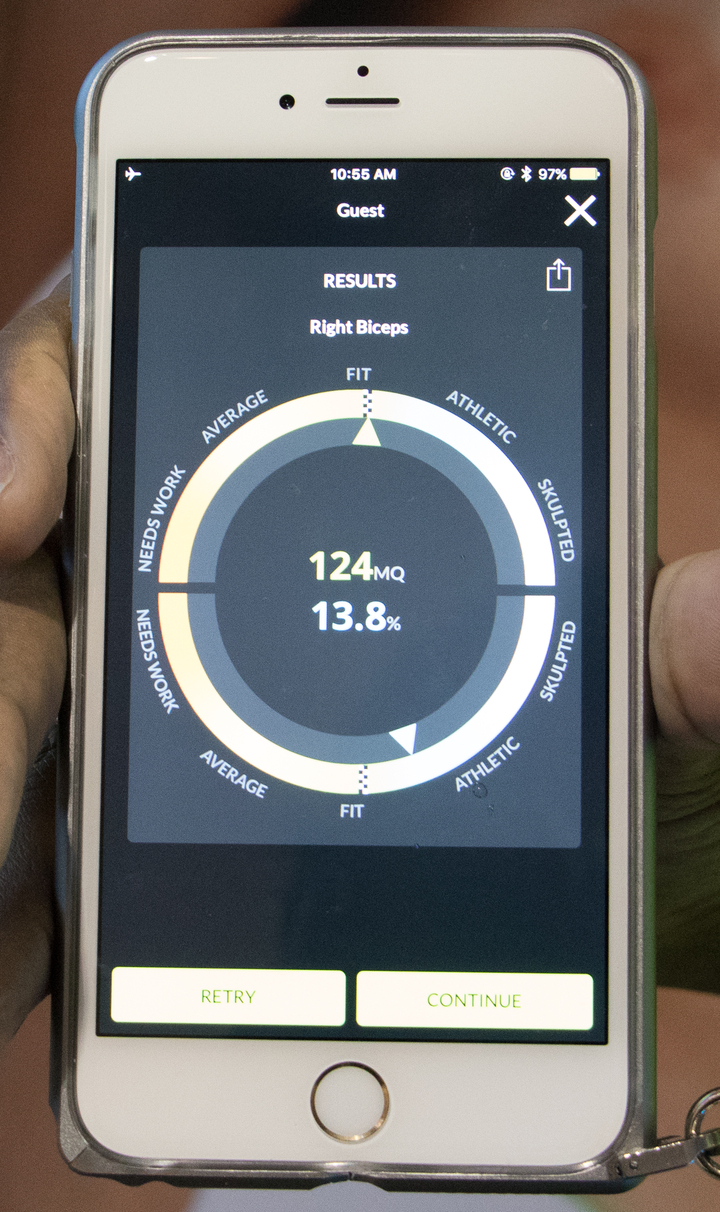 So, the Skulpt is intriguing but we’ll withhold full judgment until more hands-on testing can be done.

And with that, thanks for reading!