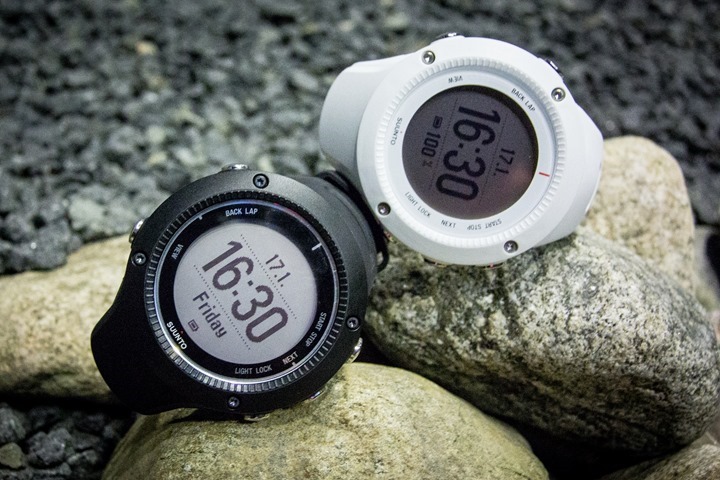 This morning Suunto officially announced their latest GPS unit – the Suunto Ambit2 R.  This unit is targeted specifically at runners, and is essentially a paired down Suunto Ambit 2S – their new watch that was released about 9 months ago.

It does however, have a few unique features that haven’t yet been seen on the Ambit 2 or Ambit 2S – all of which will be made available on those units as well via a free firmware update.

I spent a bit of time with the unit during my trip to Suunto a few weeks ago, though I was not able to use it during any runs.  That’ll happen soon though, as a unit will be waiting for me when I get back home on Thursday.  So from there I’ll aim for a full in-depth review when the unit hits final firmware in March.  Again, this is not a review – it’s simply a look at what’s new/different.

With that, let’s dive into things a little bit.

An overview of key differences: 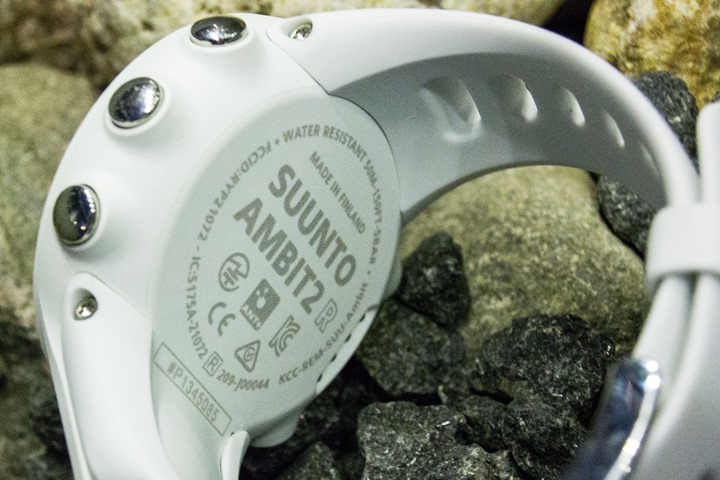 From a form factor standpoint, the Ambit2 R is exactly the same unit as the Ambit2 S.  Physically it weighs the same and shares the same outer shell and internal guts.  And just like the 2S, the white variant has a silicone strap that’s a bit more comfortable.  The white variant of both models is aimed at women.

As noted, the unit has been re-focused to the runner crowd, and thus the triathlon/multisport features have been removed.  In line with the de-scoping, some of the advanced navigation features have been removed as well.  In general, you can assume that most features that are in the Ambit2 S that are focused on running, are still there in the Ambit2 R.  I’ve gone ahead and called out the differences below.  For hiking/navigation features, the core difference is that navigation/compass is only available in exercise mode.  And finally, for cycling and swimming features – those have all been removed.

For example, within the pairing of devices you can still pair both ANT+ heart rate straps as well as ANT+ footpods (and Suunto-ANT variants of those too), but you won’t be able to pair cycling sensors (speed/cadence/power): 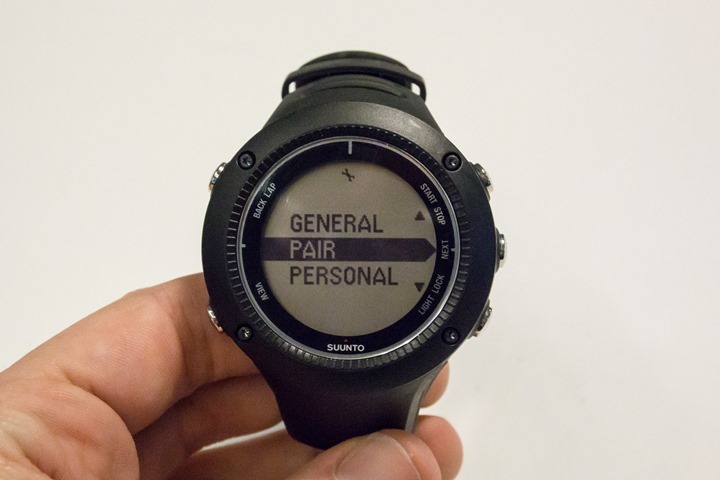 However, interestingly, you don’t necessarily need to use a footpod any longer if you just want cadence while running.  That information comes from the unit internally now – in line with what many other companies have introduced in recent months.  The watch uses the internal accelerometer to determine running cadence.  It does not at this time use the internal accelerometer to determine pace indoors though (such as on a treadmill).  But, given my findings across a number of other companies watches that attempt to determine pace indoors, they all kinda suck at it.  So no loss there in my opinion.

When it comes to navigation, the unit retained a portion of the navigational features found on the higher end Ambit 2 & 2S.  For example, you can still track back to your original starting location.  And in addition you can follow a track route that’s been downloaded to the unit from Movescount.  The unit retains the magnetic compass. 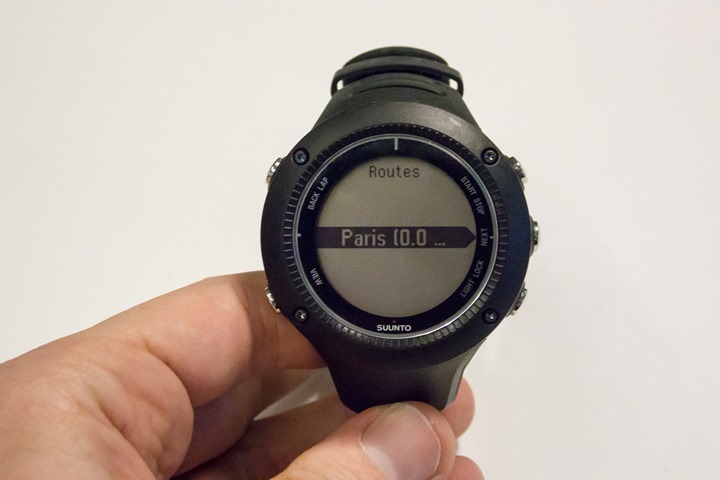 They key difference is that you can’t specify a lat/long coordinate (waypoint) like you would have been able to on the Ambit 2/2S.  On the 2R those waypoints need to be defined ahead of time – such as at the start of your run or online with Movescount.  Personally, I think that’s fair as most folks in this market won’t be randomly navigating to points off in the distance.  Also note that the 2R will only have navigation while in exercise mode, whereas with the 2/2S one could do it in non-exercise mode.

The navigation features are notable in light of their removal (or rather, non-addition) from Garmin’s newest high-end running watch (the FR620).  Thus making the 2R a pretty compelling offering for those who want that level of functionality at a significantly reduced price point ($250 vs $400).

When it comes to sport profiles – which are ways you can still create and customize display and sport settings for quick access on the Ambit2 R.  Just like before, you’ll create those profiles online using Movescount as always.  The key difference is that for a sport like cycling you won’t be able to setup/pair cycling-related sensors (but you can still pair a HR strap). 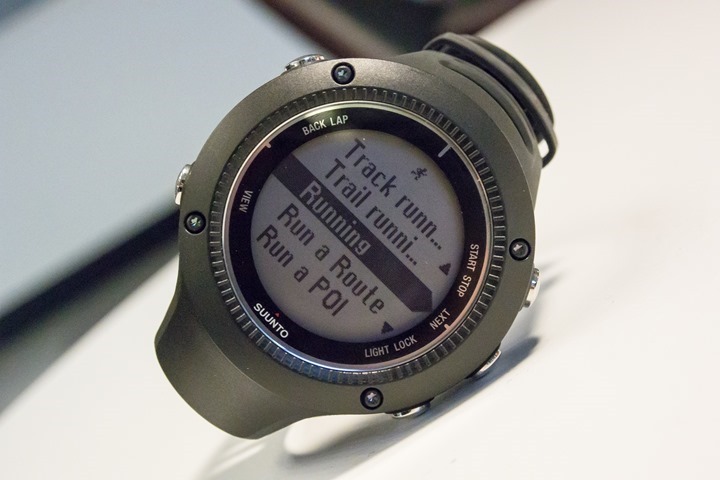 When it comes to wearing the unit as a day to day watch – that’s still in-scope.  It’ll hang out in watch mode for weeks (GPS disabled) and there’s no problems there from a size standpoint, as it’s quite normal. 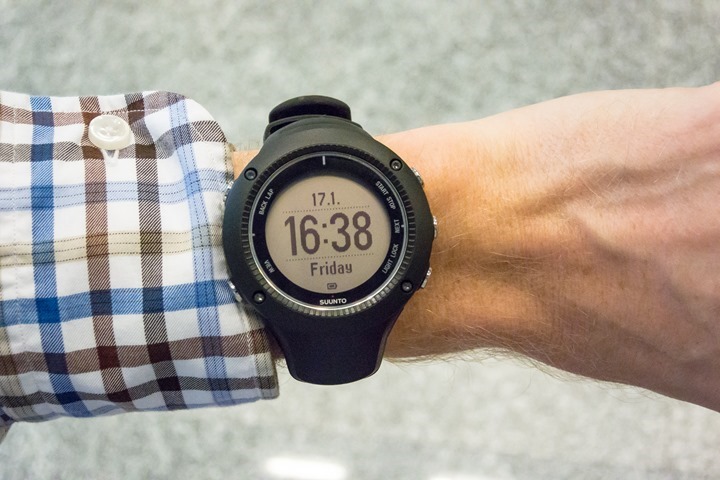 Finally, it’s definitely worthwhile pointing out that battery-wise, with GPS enabled, the unit has three options:

In general, for day to day running you’ll want to be in the 8-hour mode.  But if you’re doing a longer event, you’ll want to switch to the mid-range mode.  In general, I don’t recommend the 25-hour mode because the spacing between GPS points is so long that the data doesn’t tend to be terribly useful unless you’re walking. 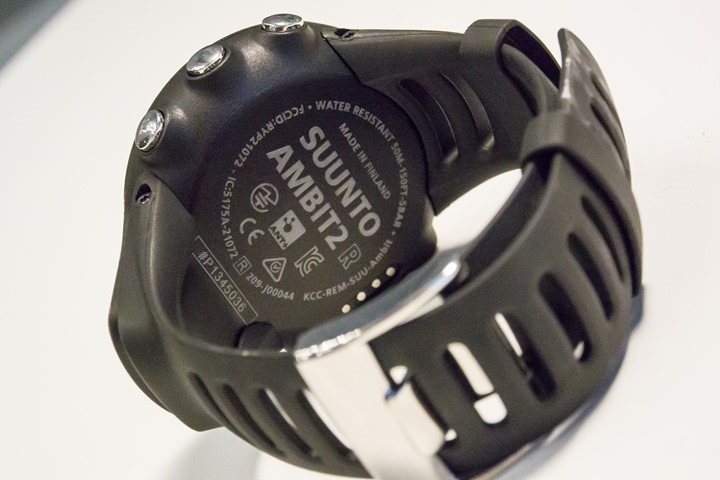 The Ambit2 R also brings with it a few new features.  These features will be pulled over into the other Ambit 2 & 2S units later in the spring (not quite at the same time as the 2R, just a tiny bit later). 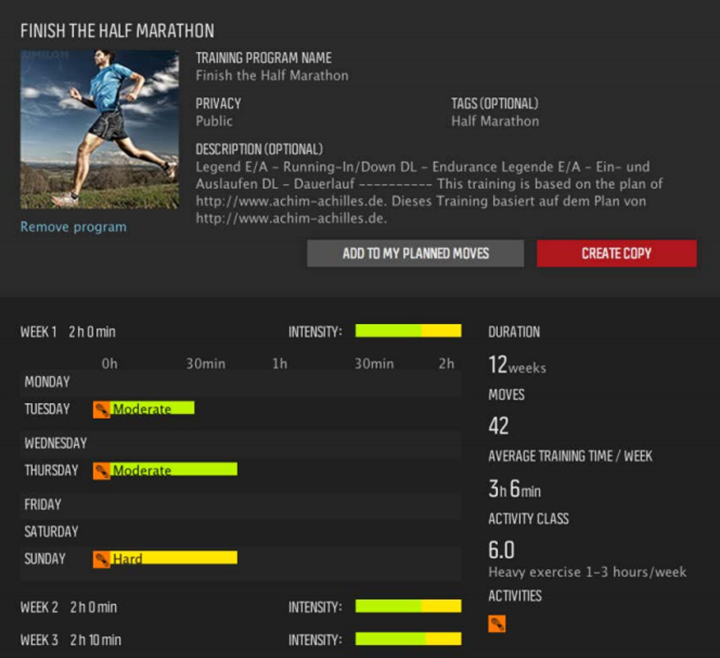 This then includes the ability to offer pace or intensity guidance during the run – such as telling you to go faster or slow down.  Or, telling you to exert less effort (heart rate based). 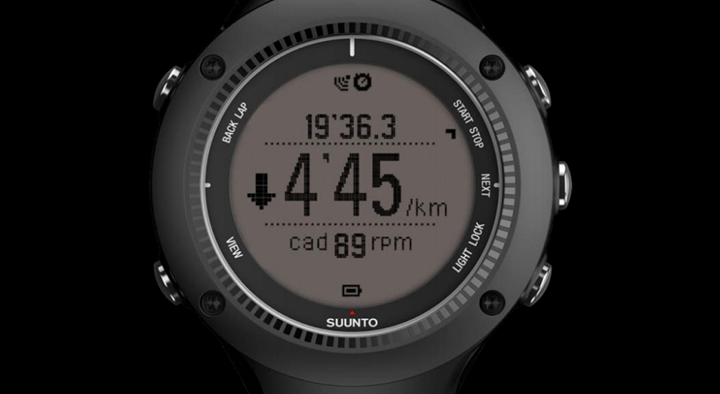 Suunto was the first mainstream company to introduce the concept of apps to the sport watch.  This allowed anyone to create generally simple apps that ran on the watch and provided an extension of functionality.  This ranged from apps that predicted power on trainers to apps that determined how many cupcakes you could eat.

Since the release there’s been thousands of apps developed.  Which, has made them somewhat difficult to sort through and find.  In order to resolve that Suunto will be tweaking the App Zone design a bit to make apps more ‘findable’.  Effectively offering a Suunto ‘Recommended Apps’ section as the default landing zone – just like other app stores do.

Further, they’ll be releasing over 10 Suunto-made apps at the time of the Ambit2 R’s release, some of these are previewed below.  Again, these apps will be made available to existing Suunto Ambit 2/2S users as well. 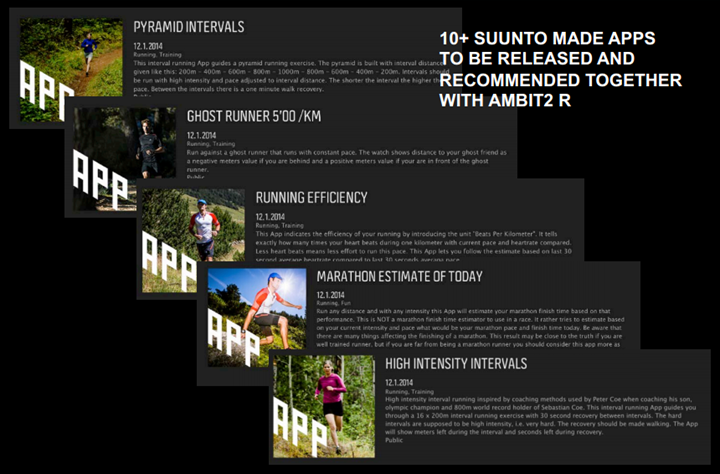 For example, the Virtual Coach app will guide you through a workout using the new intensity guidance functionality. 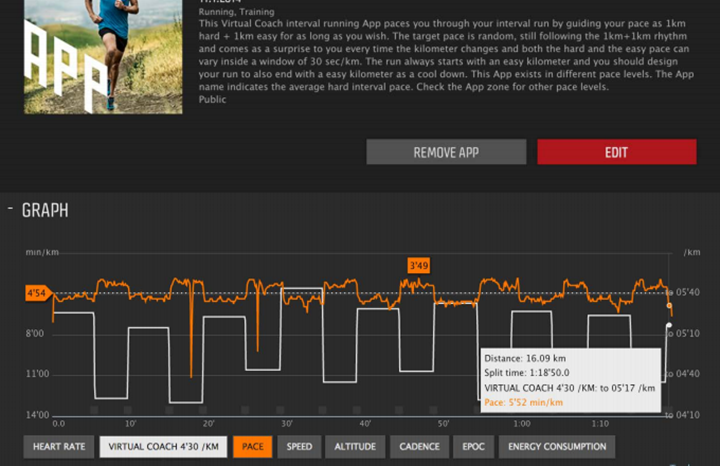 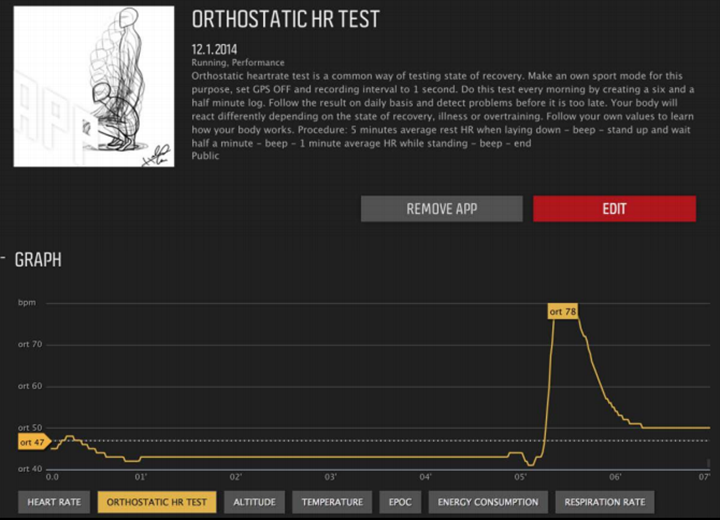 All the Suunto apps (like other apps) will be ‘open-source’ in that they will be encouraging folks to re-use the apps and build upon them in their own custom apps.

In addition to these apps, Suunto will be expanding the app API pieces as well in the upcoming release.  More details on that as they get closer.

Finally, there’s a few other smaller but ‘nice touch’ features in the 2R:

– Automatic foot pod calibration from GPS while running.  Now you don’t have to manually calibrate it – it’ll simply do it anytime you’re out running from GPS.

– Within log summary, you’ll get the fastest kilometer and mile that you’ve completed (think PR’s)

With that, that covers all the new stuff.

I’ve added the Ambit2 R to the Product Comparison Tool, which means you can mix and match it against any other watch/unit that I’ve ever reviewed for feature comparisons.  Note that there are some features that are on the Ambit2 R at launch that will be added to the Ambit 2/2S down the road.  So in general, if it says ‘Yes’ within the Ambit2 R table, but no in the Ambit 2/2S, it’ll be there eventually in the 2/2S.  But I didn’t want to set them as ‘yes’ now, because then folks buying the device between now and April/May might think the unit has that functionality.

For now, I just added the Ambit 2/2S/2R into the tables.  However, you can easily make your own change with any device you want here at this link.

Again, remember you can easily make your own change with any device you want here at this link. 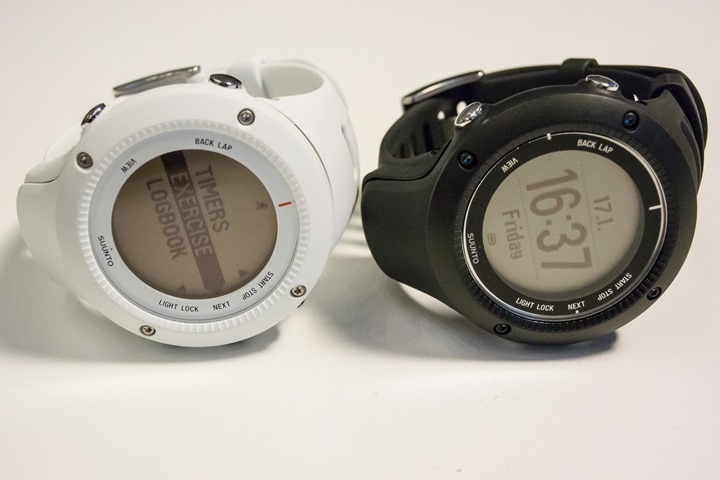 In general I like what Suunto has done here with the mid-range running-specific unit.  It offers more customization and flexibility than other competitive units.  For example, the ability to create multiple sport profiles with different settings isn’t really found on competitive units in that price range.  The same goes for the navigation functionality – which also isn’t found on other units in that price range (or even many at a higher price range), Suunto has a distinct advantage there.

On the flip side, the lack of Bluetooth connectivity to the phone will be seen as a significant drawback for some.  Whether it’s uploading completed workouts via your phone (such as on the Garmin FR220, Adidas Smart Run GPS, and upcoming as previously announced on the TomTom units), or live tracking capabilities.  The Ambit2 R simply doesn’t have a Bluetooth chipset within it, and thus won’t be capable of having such functionality.

Thus, the price point may be a tiny bit high given there tends to be more mainstream interest in smartphone integration than navigation.  Still, for those looking for some of those navigation features but don’t need the full set of swimming and cycling components found in Suunto’s higher end Ambit 2/2S units, then the 2R represents a great deal, coming in at a heck of  a lot less than either the Ambit 2/2S or the Garmin Fenix/Tactix.

The addition of the new training calendar and scheduled workout type functionality pushing to the unit will really help to close the gap to other units as well – and I’m really looking forward to diving into that more with my test unit.  Keep in mind that functionality will be added to existing Ambit 2/2S units later this spring.

With that – I’ll next loop back when I get my full in-depth review published sometime in March upon product release.  I’ll be adding in the Suunto Ambit2 R here shortly into the product comparison database/tool as well – hopefully within a day or so.  Allowing you to get a bit more crisp picture of the functionality between the three Suunto Ambit 2 units (2/2S/2R).