Since I’ve got less than 45 minutes until my flight departs, we’re going to go bullet-point style to cover the randomness that was this weekend:

(Edit: Ok, my attempt to publish before departure was thwarted by my little friend…slow internet.)

#1: I rode around a bit, doing some power meter comparisons 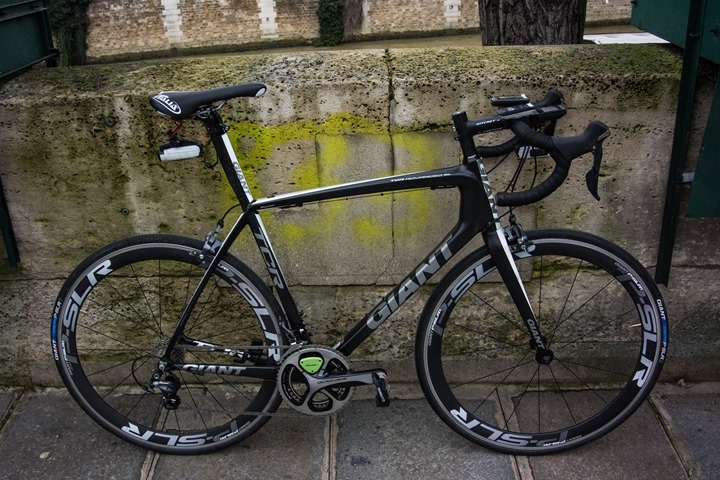 I went out for a few rides, roughly an hour each, capturing power meter data on the Pioneer power meter.  I’ve been riding it off and on since earlier this winter.  I’m hoping though that in the next few weeks I’ll have a fair bit more at-home time to wrap things up and then get a review published.

It’s a bit tricky in that they dropped the entire pre-set bike in, so I had to tweak a few things in order to get power data.  I swapped out the pedals for Vector ones.  But that only gives me two data sources while outdoors – for power meter testing I really like to have a minimum of three data sources.  Thus allowing me to at least trend which of the units I think are right.

Simply stick on the PowerTap wheel you say?  Well, I would have except the provided bike included an 11-speed cassette in the rear, and my PT hub is 9-speed.  Thus my shifting was crap.  So I ordered  a new 11-speed cassette for my PT hub that I’ll pickup in the states this week.  Thus resolving my outdoor lack of power issue. 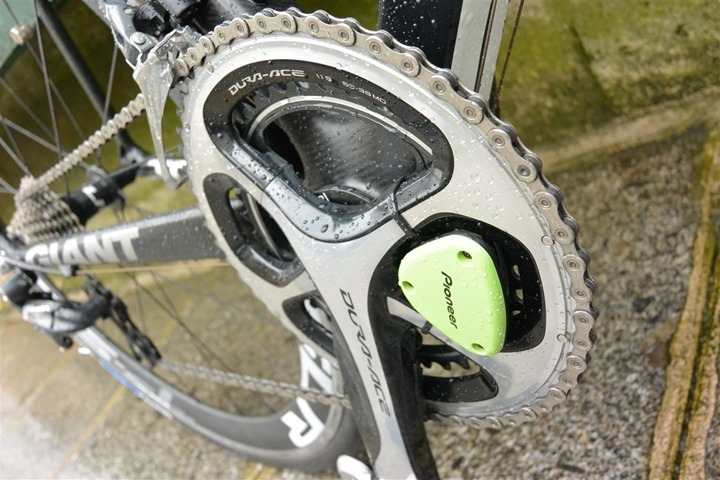 The only downside to doing power meter testing with the Pioneer is that I have to switch the unit into ‘ANT+’ compatible mode.  On the Pioneer, it transmits power data in one of two ways:

Option 1: Native Pioneer mode.  In this mode it uses ANT to send the full left/right data to the Pioneer head unit.  It does so in a manner that provides far more data than other head units can accept – so both the type and quantity of data is dramatically increased.  In doing so, they use ANT and not ANT+.  Thus, a Garmin or any of my other tools can’t read the data stream.

Option 2: Switch it into ‘ANT+’ mode.  When you do this, it acts as a normal ANT+ power meter and transmits total power and left/right power.  But it doesn’t transmit some of the more ‘interesting’ things that Option 1 provides.  But it’s realistically the only way I can get comparative data out of the unit.  While I could technically have the data exported afterwards in software, that’s an administrative mess.  First the data isn’t time-code aligned, so I’ve got to re-do that.  Then I have to re-format it to match into the tools I use for comparison.  I’ve long since learned years ago that when doing power meter comparisons minimizing the amount of data cleanup you have to do is critical to successful and efficient analysis.

To switch between the modes you need to remove the battery compartments on each unit and flip a tiny little switch.  It’s not a big deal.  Just four screws, but it’s a bit of a bummer to have to do semi-frequently.

Finally, I was also testing a few other things while on the bike…but more on that some other time.

I’ve had a few requests lately to get power curve data for the Elite Muin trainer.  That’s the trainer that’s quite a bit quieter than most other units on the market.  ‘Power Curve’ data is data that represents the power to speed profile for a given trainer.  Not all trainers can have a power curve (for example, ones where you can control the resistance manually or through a computer).  But fluid ones like the Muin can – where a specific speed always equals a specific wattage.

To do so I had a few power meters on my bike (Quarq ELSA + Stages), and then I had speed sensors setup as well.  This would record the hub-speed (effectively the wheel speed) as specified by Elite.   From there I’d collect samples at a variety of speeds. 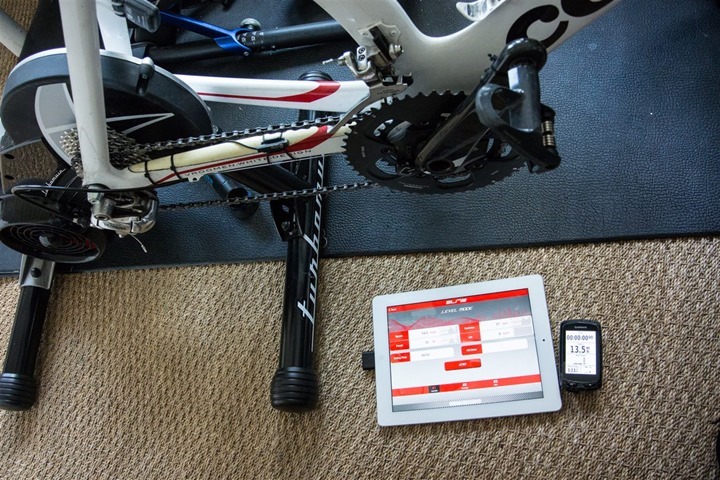 I did this post-tempo run, so I was a wee bit fatigued.  But I got speeds ranging from a few MPH to 20MPH.  Which capped out at about 600w.  Not too shabby!

Ultimately, the data isn’t terribly exciting.  That data will then find its way into products like TrainerRoad and others.  I provide the power curve data free for anyone that wants to download it.  You’ll find it at the end of my most recent post on the Muin in the comments.

On the list of things that was planned for my weekend when Friday rolled around – Munich was definitely not on them.  But, some things got tweaked and in order to get what I needed for a few posts I swung up there briefly to visit the show floor of ISPO – the massive sport & fitness show.  It’s like Eurobike…but on steroids. 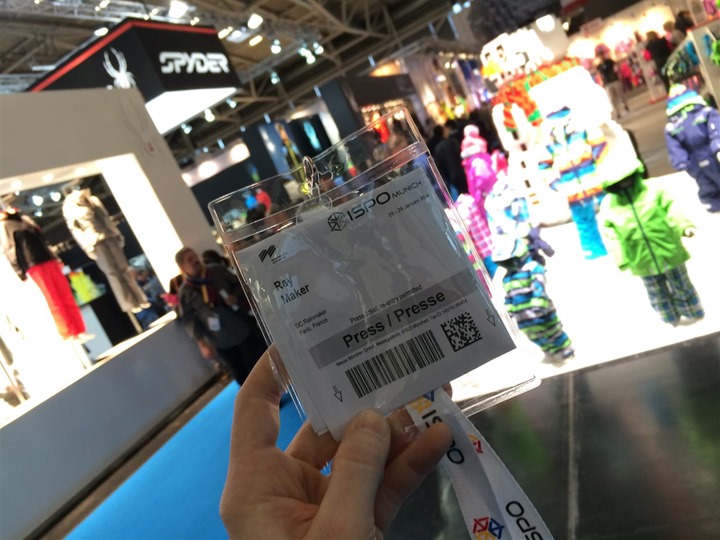 I flew up on a 7:15AM flight, and landed into snowy Munich around 9AM.  From there it was straight to the convention center for about 90 minutes, and then right back to the airport for a flight just after 12PM.  Efficiency at its finest! 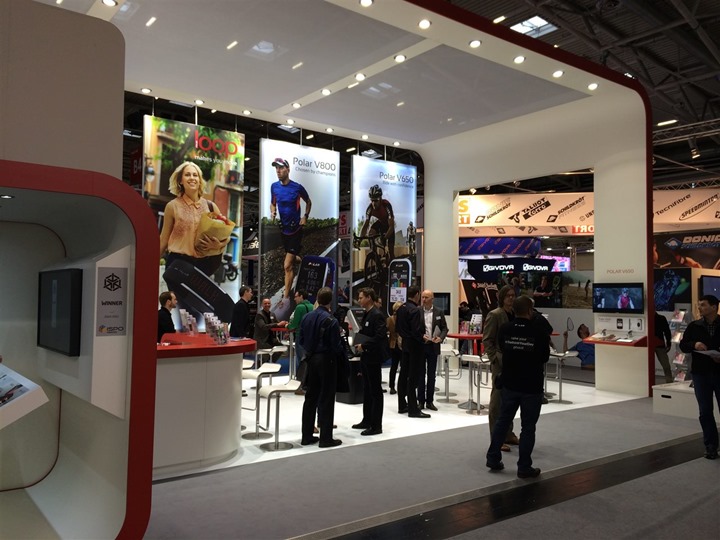 Though, I suppose I was in Munich slightly longer than 90 minutes, but it was only 90 minutes of usable time…so that’s how I’m looking at it. 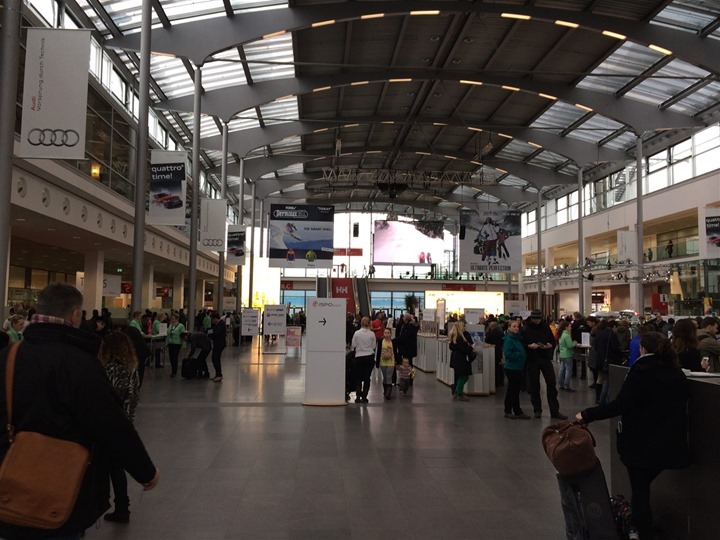 I would have loved to stay longer at the show – and will definitely put it on the radar for next year.  But my schedule was just too busy to accommodate any more time there unfortunately.

#4: We had a small dinner party

Some folks have asked for more food photos in posts, harkening back to many of my past posts.  Thus, here’s a few from Saturday night.  We had some of the CupCakery employees over, as well as a few friends, plus The Girl’s Dad had been in town. 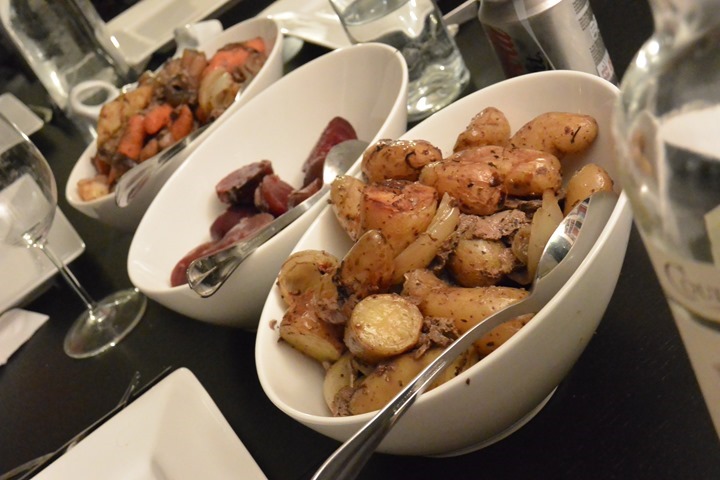 He cooked up most of the vegetables and meats.  Almost all of which he picked up at the outdoor market around the corner earlier in the day. 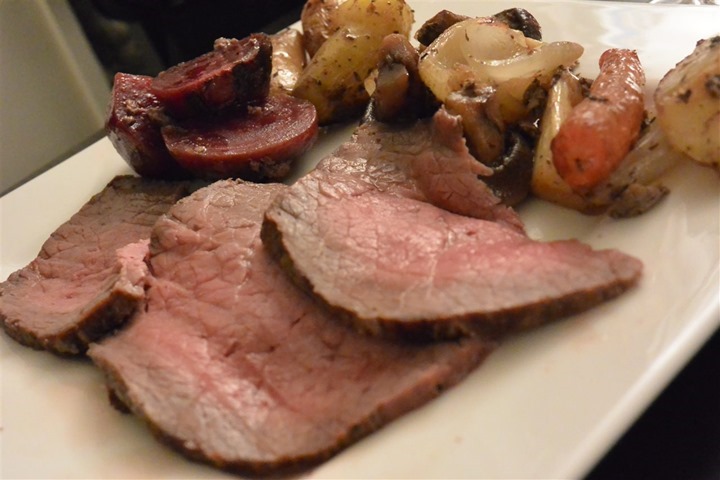 Meanwhile, The Girl whipped up a quick carrot cake (seen to the left), while one of our bakers made a French King Cake, which is similar to the New Orleans variant whereby a small little toy is placed inside.  There’s also a bit of a customary game that goes along with the serving of said cake and the little toy. 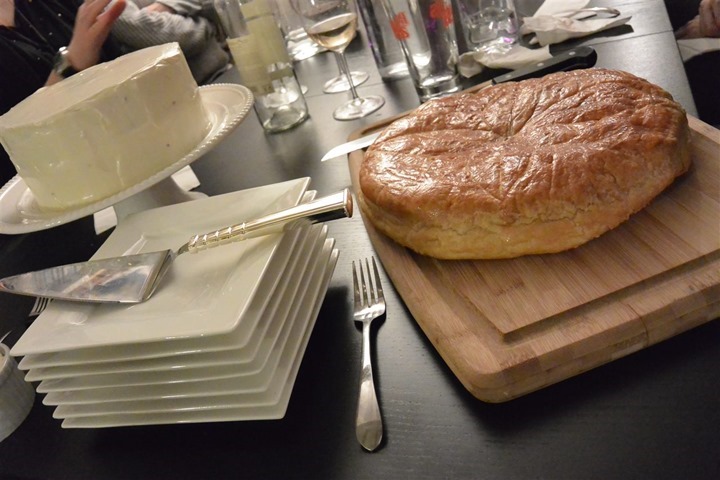 Both were great, though, I was definitely regretting the extra piece (or two) of cake the next morning about mid-way through my long run.

#5: I went for a 16-mile sunrise run before my flight this morning

Last but definitely not least was this morning’s long run.  While it was originally scheduled for yesterday, with the last minute trip to ISPO things were going to get kinda ugly schedule-wise for the long run the same day.  Sliding it to today didn’t have any major effect on my overall training schedule.  Given long runs tend to be one of the most important workouts of the week, it’s key that you get them in – so I didn’t want to miss it.

I woke up around 6:45AM and was out the door by 7:00AM.  I had to put back together my CamelBak after cleaning, so that caused a slight delay of game.

Stepping outside, it was dark, a bit chilly (39°F), and a wee bit windy.  But, certainly a heck of a lot better than yesterday afternoon where it was raining sideways. 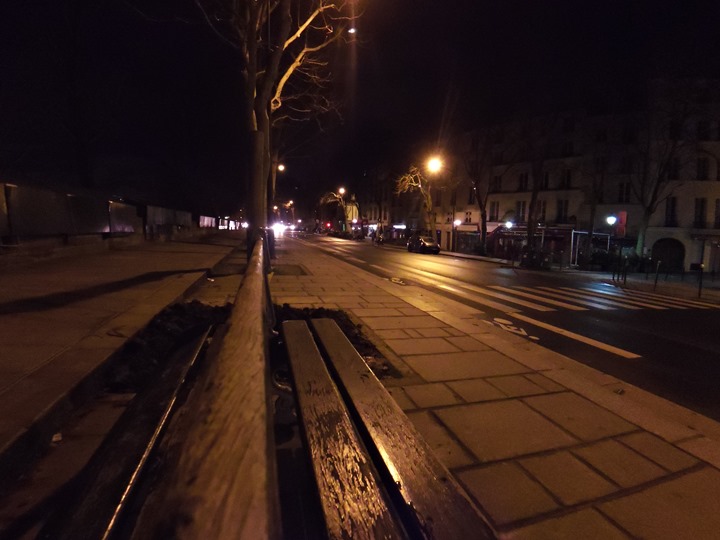 I headed out down along the river, mostly in an attempt to avoid having to stop and go with cross streets/bridges.  Of course, that really just resulted in being in a big wind-tunnel as the wind settled into the banks of the river.

As I neared the Eiffel Tower I noticed the lights were out.  I guess I never really noticed that they turn off the lights at some point in the night. 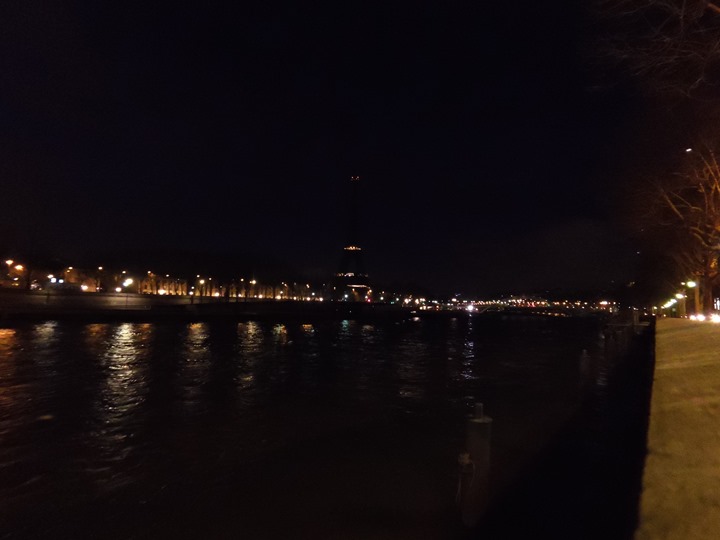 I’d end up wandering into the park around Longchamp and then ultimately coming back up towards the Arc de Triomphe. 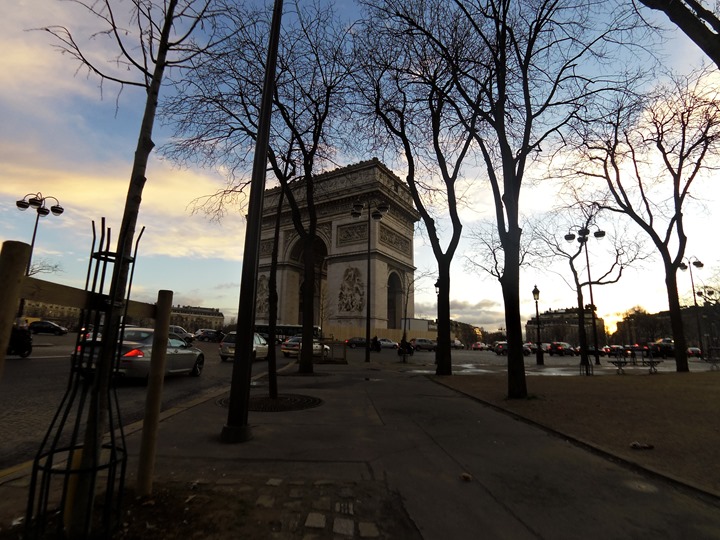 From there I’d run down the Champs-Élysées and into the Tuileries – which is the large garden next to the Louvre.  It was pretty much desolate. 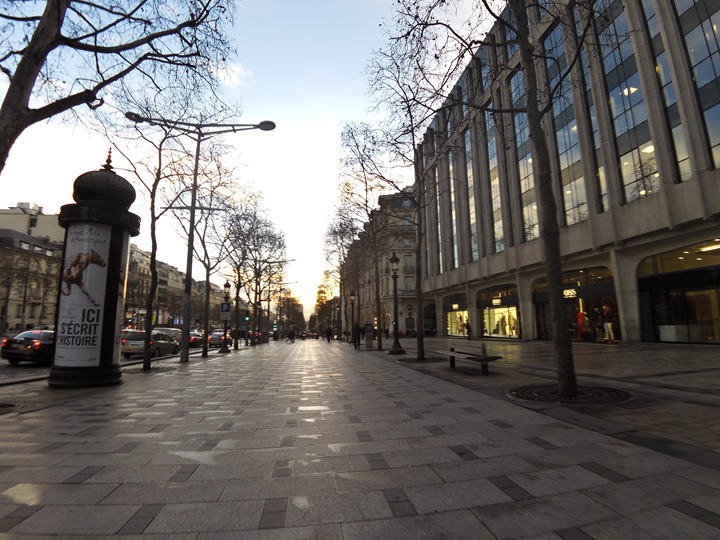 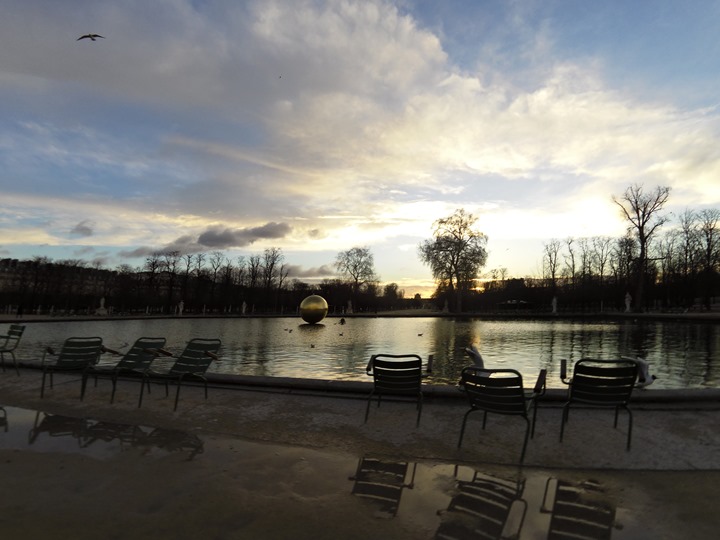 At that point it was past the Louvre itself and then through the building to skip over to the other side. 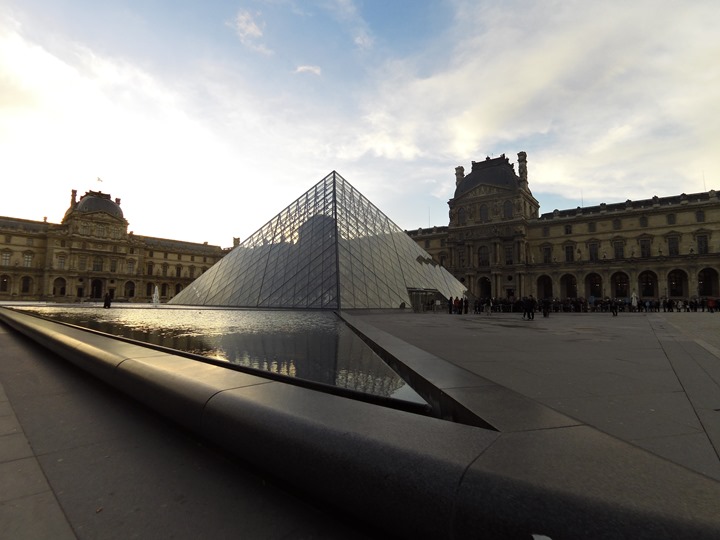 I’d wrap up the 16 miles in about 1hr and 55min, right back where I started.  Definitely no time this morning to do any sort of point to point journey, as I couldn’t afford spending an extra 20+ minutes getting back home via the subway.

From there it was a super-quick shower and then a ride out to the airport for my flight across the pond.  A short trip this time, just 48 hours thankfully.

With that, thanks for reading!  Hope everyone has a great week ahead!