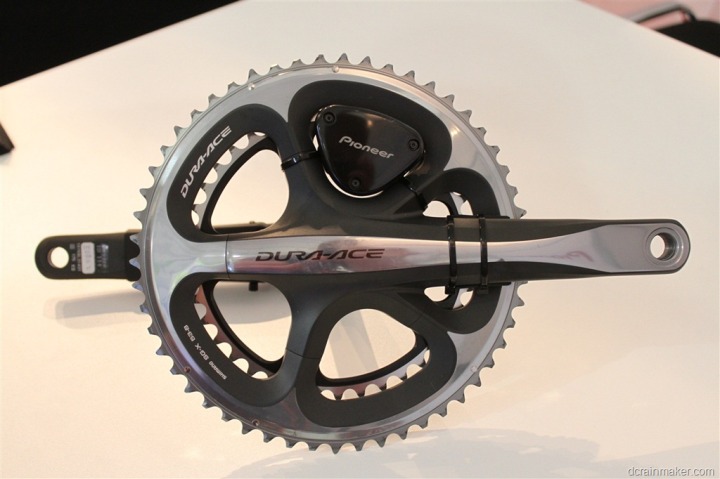 This year at Eurobike, Pioneer has finalized and announced details of their upcoming power meter solution, which is due to be out ‘roughly’ in January 2013.  The unit has made the rounds on the bike and technology convention circuits for a few years now – though to my knowledge it was never previously attached to a bike, nor showing the final configuration as it was today.

The unit is sold without crank arms, chain rings or spider, and consists of three fundamental components.  Two torque measurement devices that affix to the side of a the crank arms, and one pod in the middle which acts as the transmitter hub to the bike head units.  The two torque measurement devices have perpendicular strain gauges which can measure torque both in a twisting motion on the crank, as well as vertically across the crank – allowing it to determine the force you exert on the crank as well as the direction that you’re exerting it (force vector).

The below photo was a bit tough since they had it sealed under glass in the separate pieces – making it a bit hard to get a solid photo of: 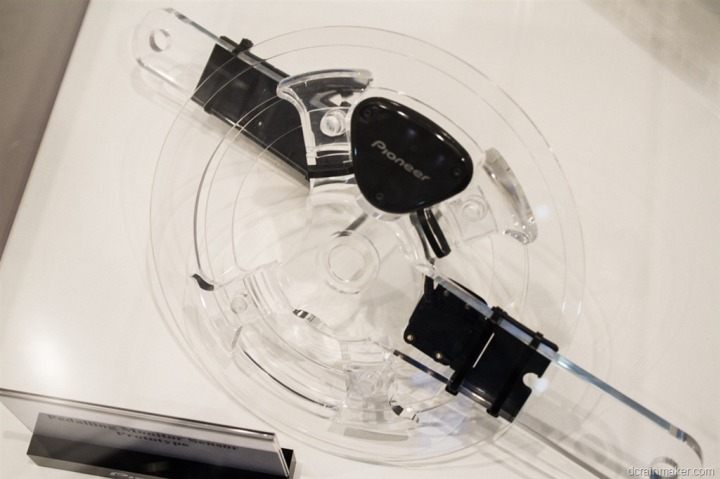 The two measurement components attach to your crank arms in two pieces.  The first component is cemented onto the crank arm.  This is the piece that actually measures the forces exerted onto the crank arm.  The second component (transmitter pod) then snaps into the first piece – but utilizes zip ties to ensure a secure fit.  The zip tie piece doesn’t have anything to do with the force measurement, but rather merely sends the signals onwards.

The Pioneer system will be compatible with only Shimano Durace 7900 and 7950’s. 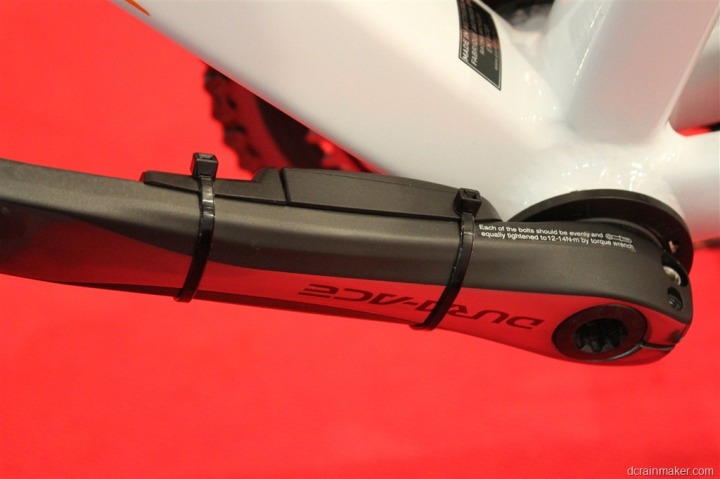 The system is powered via standard CR2032 coin cell batteries, which will alert you via ANT+ to the head unit when the batteries are low.  The batteries last approximately 200 hours within each of the pods. To extract the batteries, you’ll open up the little pod below using the four screws (each pod has a battery). 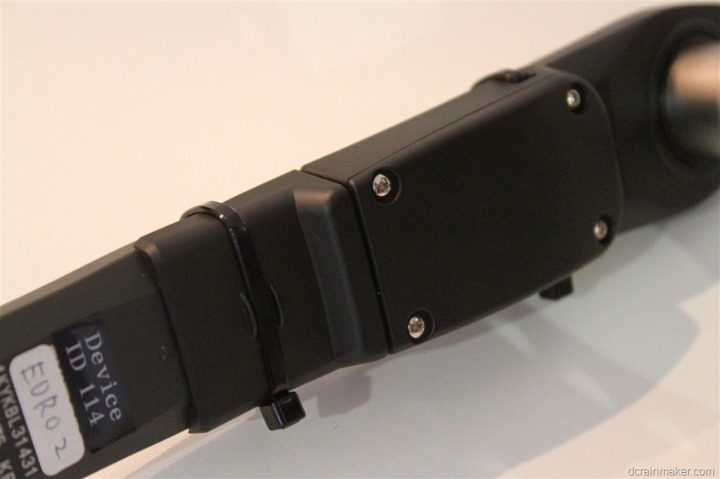 Interestingly, the unit actually features IPX5 waterproofing, which is a bit better than the usual IPX7 used in most power meter devices.  IPX5 dictates that the device must be able to forced/focused stream of water against the device.  IPX7 dictates submersion requirements of 1 meter for 30 minutes.  In cases of watches, you want submersion requirements.  But in cases of power meters, you tend to actually want jetted water requirements given the high speeds at which water can enter the unit.  In most cases, IPX submersion based is fine – but the jetted water is good.  Note that IPX5 doesn’t mean it has IPX7, and IPX7 doesn’t mean it has IPX7.  The results are not cumulative.  Confusing, yes.

Cadence on the unit is supplied via magnets that trip a small cadence magnet plate that’s set in between the crank arm and the frame of the bike.  You can see it in the below photo (small black plate): 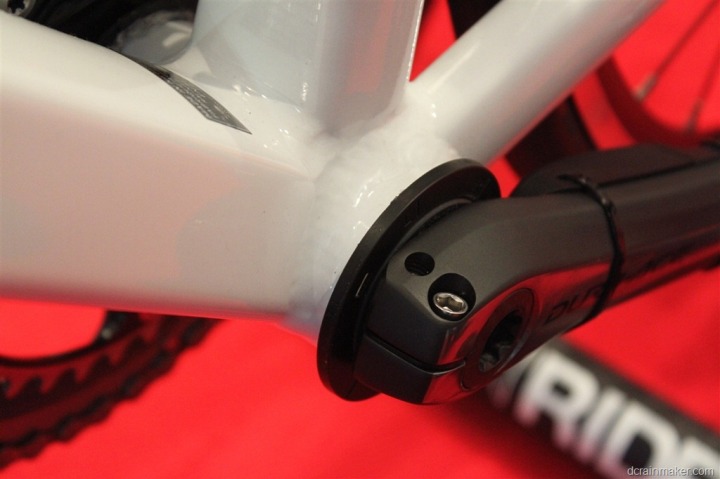 Installation of the unit is going to require a bit more bike and power meter knowledge than your average power meter.  So much so that Pioneer notes it will require the bike shop to be trained in the installation of the device.  This is due to the requirement to ensure that the position of the sensors is absolutely perfect, otherwise the unit would likely have accuracy issues.

You’ll notice the fairly complex wiring and zip tie arrangement that must occur on the back of the spider, where the primary transmitter pod attaches: 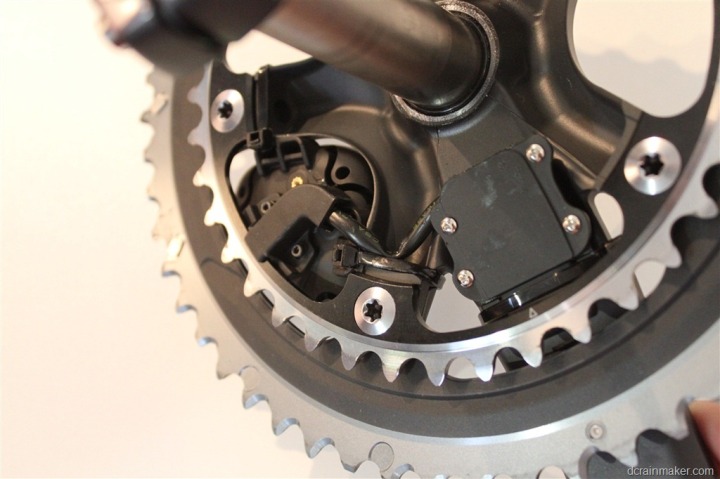 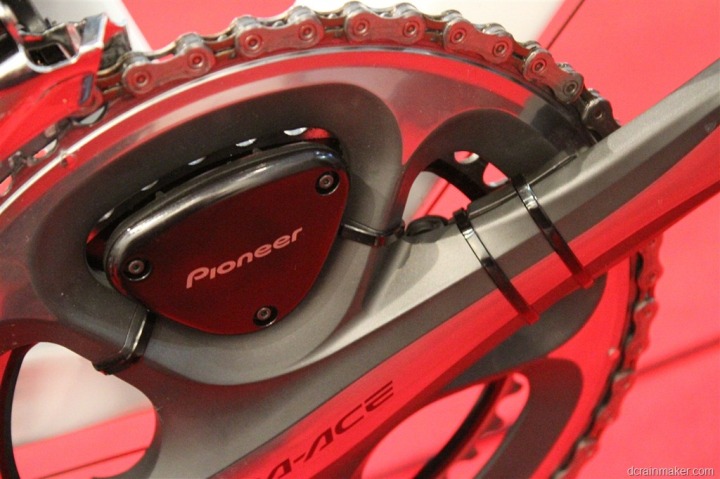 Once the main pods are attached, they’ll need to attach the crank arm pods.  They must be placed in exactly the right place and position: 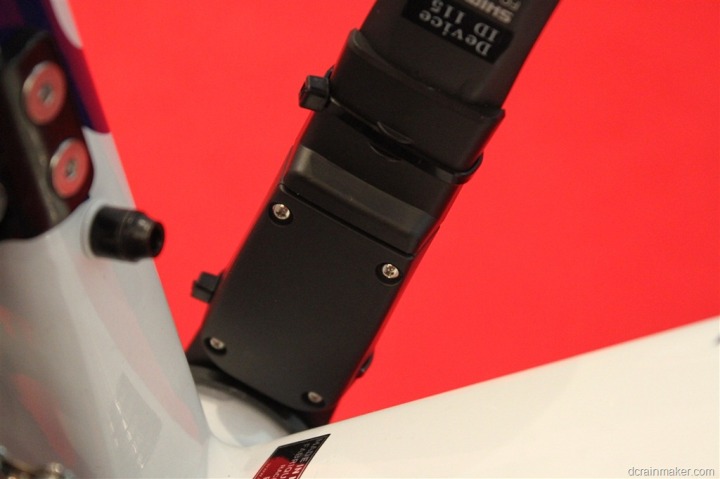 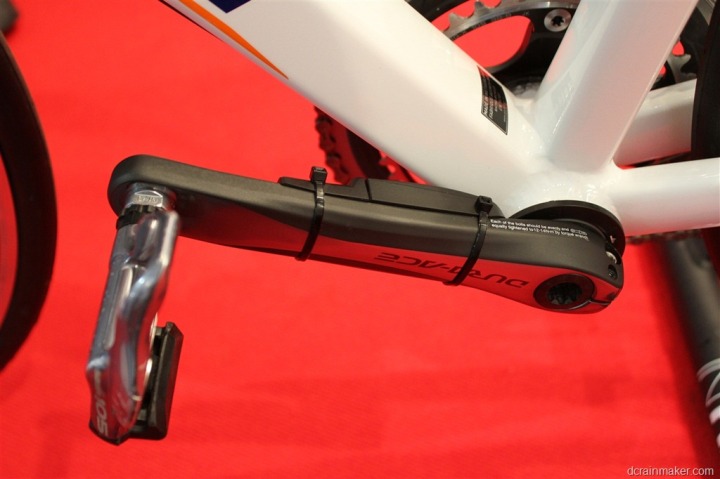 Following which you’ll be required to do a static load test using a 10kg weight.  The weight will be supplied to dealers that are trained on how to install the system.  The logistics of the training aspect are still being worked out, but will be made available closer to release.

In addition to the obvious static torque calibration procedure noted above, you can also do a simple auto zero procedure – though, the initial static load test must still occur during installation. 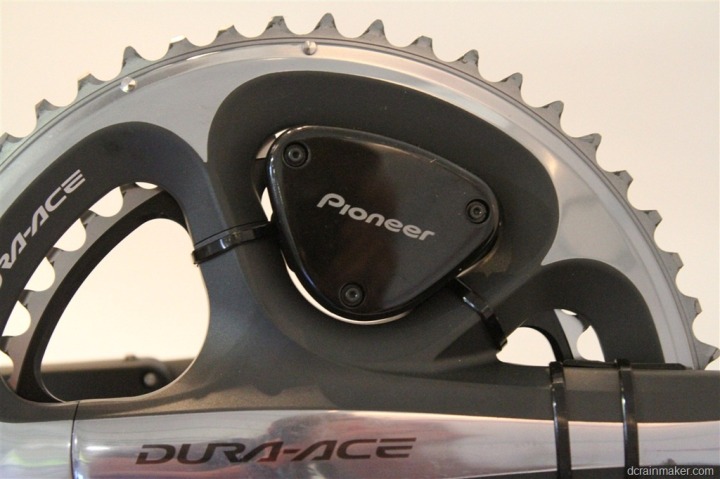 The unit is capable of taking measurements of your power output and direction of torque every 30 degrees of rotation, which allows for a bit more analytical capabilities that other power meter are offering.

Interestingly, they confirmed that they’re broadcasting a private ANT data stream in addition to the standard ANT+ power meter metrics to support the added data pieces.  These additional metrics are viewable only on their Pioneer “SGX-CA900 Athlete Cyclometer”, which, is their head unit pictured below.  By the way, the official name for the Pioneer power meter itself is the “SGY-PM900 Pedaling Monitor Sensor”.  But, back to the head unit… 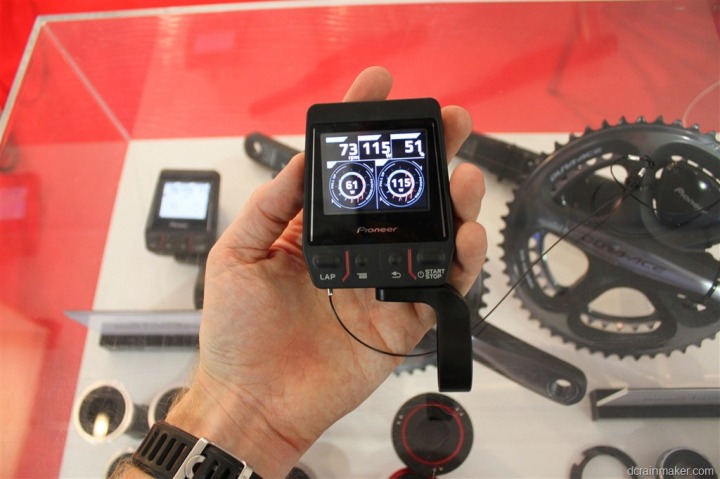 From my poking around with the unit, the power meter has the vast majority of data fields that you’d expect on a power meter head unit.  Including the left/right fields, %FTP fields, lap/total averages and more.  The unit has a barometric altimeter, a GPS sensor and a temperature gauge.  It’s rated for 12 hours of battery life and has a micro-USB port on the bottom for downloading.  It features IPX6 waterproofing, which continues to be better than the industry norm IPX7 for most bike computers.  Because of the ANT+ compatibility, it also connects to heart rate sensors, speed sensors and cadence sensors. 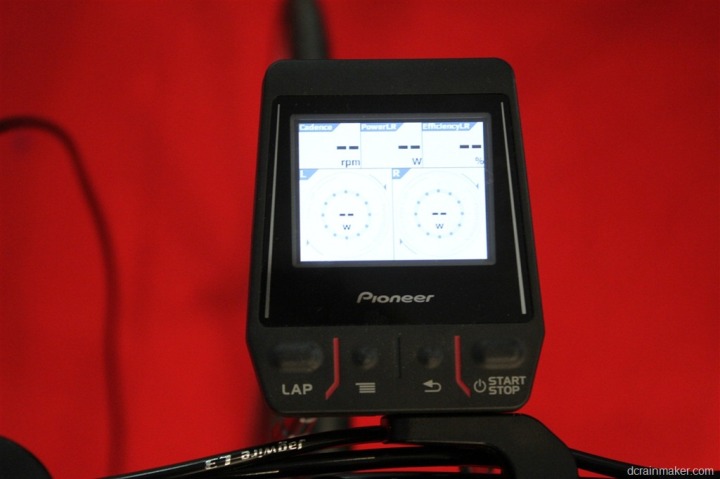 As you can see above (sorta), the head unit also displays the force vector metrics, which is unique to the platform. 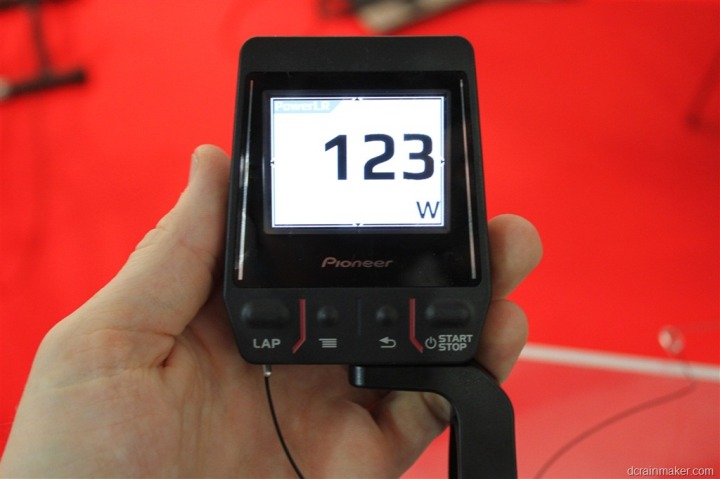 In addition to the head unit, they also offer a cycling training log site (Cycle-Sphere), which allows data management of the files generated from the head unit itself. 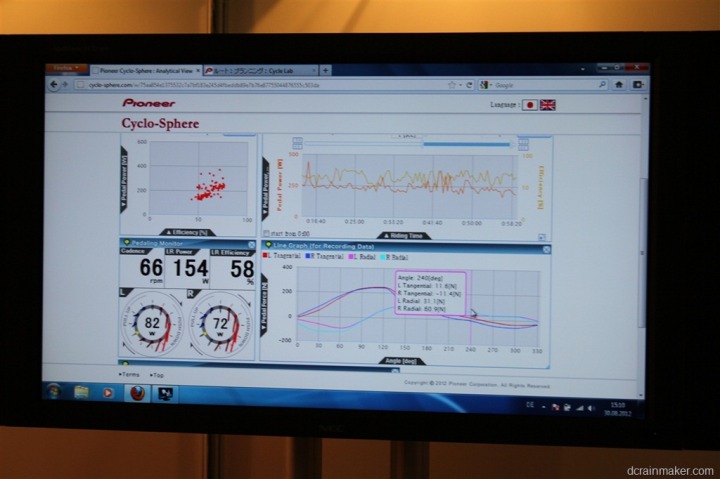 You can see some of the more unique metrics displayed – such as left/right torque values over the course of the pedal stroke: 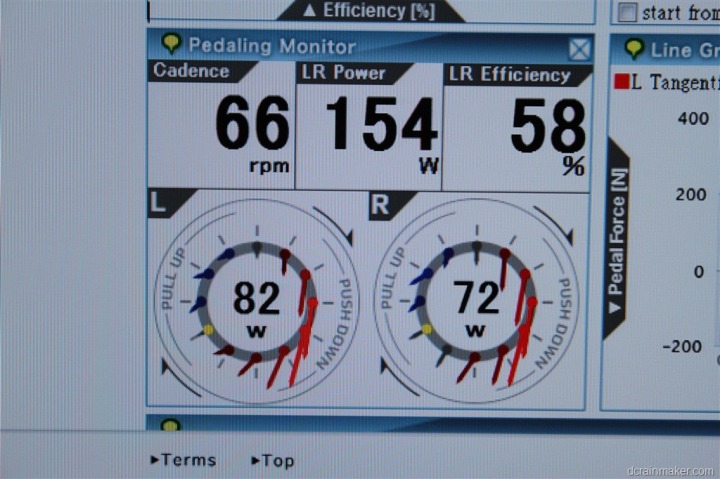 The unit will have some challenges ahead though.  In addition to concerns folks are already noting about the zip tie attachment arrangement, the price point is €2,500.  However, for US folks the price will first be set in Japanese Yen, and then the Yen to Dollar Exchange rate will be applied.  This means it’s a bit tough to tell the price – but they believe it would be lower than the Euro to US Exchange rate, would have pegged it at $3,100US.  In either scenario, it makes it the most expensive new power meter on the block – and that doesn’t include any cranks or other drive side componentry.  Availability as noted above is targeted at January 2013. 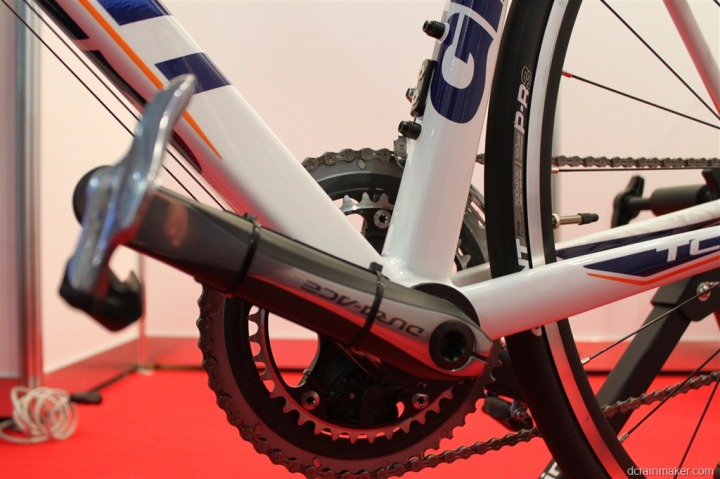 As always, thanks for reading.  If you have any questions – I’d be happy to swing by back the Pioneer folks on Friday or reach out to them via e-mail.

Update 8/31/2012 5:30PM Eastern: After getting to talk with some native English speaking Pioneer employees today, we were able to clarify a few things and get the updated above.  Here’s the quick list:

1) Clarified how it measures force via perpendicular strain gauges
2) Added more information about zip tie components
3) Added information regarding bike shop installation requirement
4) Received information that unit will use 10kg not 20kg weight, it will be supplied to dealers.