Power2Max has announced a software and hardware update to their existing Power2Max ANT+ crank based power meters.  The update adds emulated/calculated left/right power balance, as well as a temperature sensor to aide providing accurate power measurement and correcting drift issues seen in the current generation of Power2Max power meters. 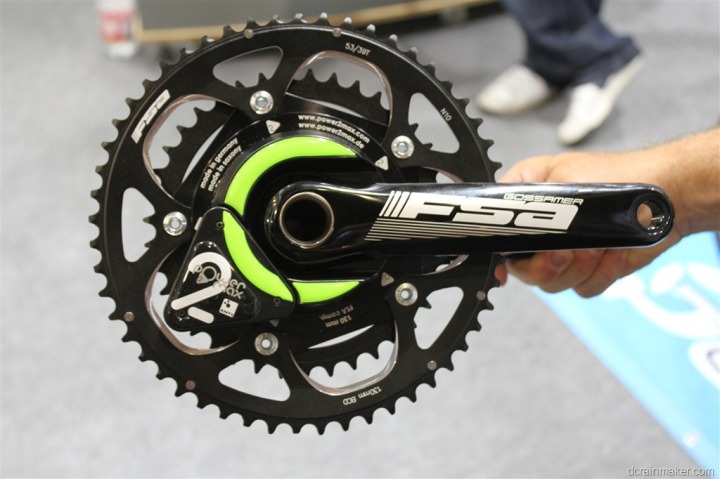 The update comes in two different ‘flavors’.  The first is the update to provide standard ANT+ left/right power balance.  The power meter does this in a similar fashion to that of the new Quarq SRAM RED 2012 power meter, which separates out the upstroke from down stroke power and assigns it to the opposite leg.  Thus power during the upstroke is assumed to be coming from the left leg, while power from the down stroke is assumed to becoming from the right leg.

As I noted during my review of the Quarq – this method isn’t fool proof, and offers minimal benefits and data analysis functionality – since everything is guesstimated.  Even the Power2Max folks noted to me that the benefits are minimal (if not outright questionable) – but that it was something that users were asking for.

As such, they’ll be offering it for a software update for Europeans €10 (and for US/Canadians for $10 as well).  This will require sending the unit back to them.  For Europeans you’ll send it directly to Germany, and for US/Canadians you’ll send it to the dealer you bought the unit from in Canada (Power2Max distributor).  I’m not clear on the other worldwide distributors, but I suspect we’ll see similar pricing announced.  This is available for all previous owners of the Power2Max.  Again, the $10/€10 update only adds left/right power emulation. 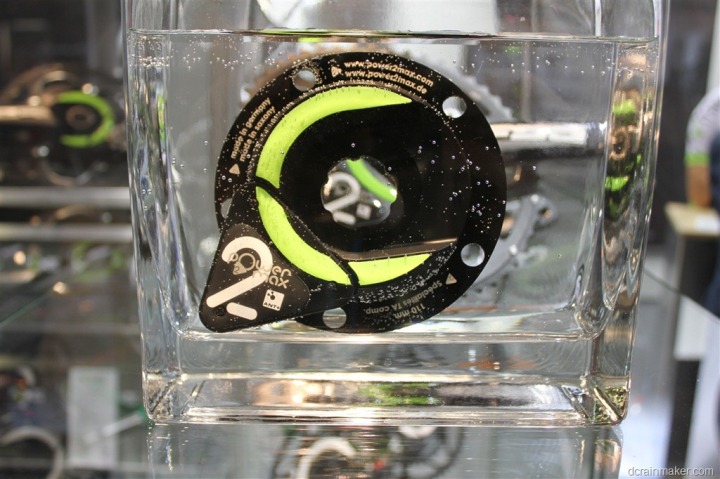 (The above photo has nothing to do with updates, it was merely a Power2Max sitting in a glass of water.  I thought it was interesting, thus, this seemed like a fine place to put it in the post.)

The second update available that is being offered will be to add a temperature correction sensor into the existing module.  This will autocorrect the calibration of the unit every 30 seconds, based on temperature changes.

Drift has been the primary – if not singular – complaint about Power2Max power meters since their introduction as a low-cost power meter.  This was especially noticeable in cases where temperature change was dramatic and often took between 15 and 40 minutes and multiple autozero’s to get level power.  I saw this in some of my recent tests while testing the Power2Max against three other power meters.

By adding the temperature sensor, they’re in line with many other power meter companies that are constantly compensating for temperature shifts.

This hardware update will be offered for $50US/€50.  Like the first update, you’ll send it to your respective distributor – either in Germany for Europeans or Vancouver for North Americans.  With the pod replacement comes the left/right balance as well.  Meaning, you’ll get both updates for that $50US/€50.

The expectation is to start offering these updates in 2-3 months.  They are planning their first major production order to be placed next week, with arrival about 2 months from now.

As an interesting aside – they’ll be offering a €345 crash replacement plan for your Power2Max.  So if you have it fall off (like mine did), and it some gets destroyed (mine was fine) – then they’ll replace it.  This is actually pretty interesting, and not something that I’m aware of any other power meter companies announcing formally.  Many bike component companies have crash replacement plans – but this is the first I’ve seen that formalizes that in a public manner. 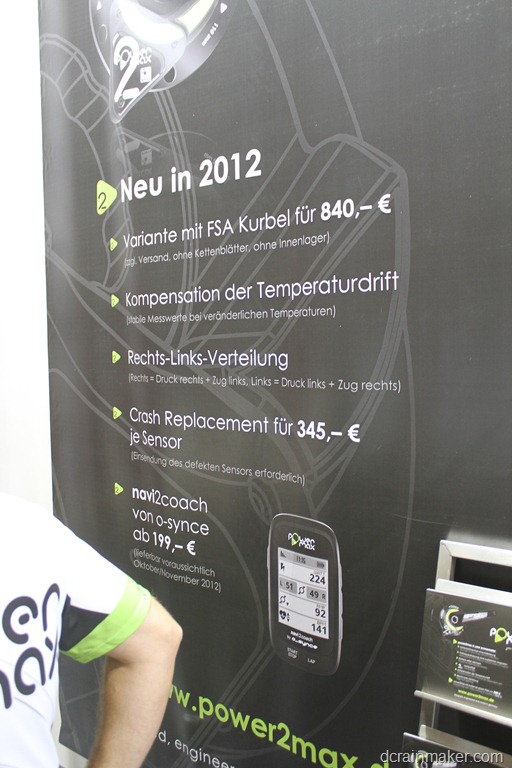 All new Power2Max units starting in about three months will include all these updates by default, and for the same price as before.  Pricing will not change, with the exception of a lower price point for the bundled FSA Gossamer cranks – which is €840 including the cranks.

Additionally, they’re now going to be offering new crank types – including the FSA noted above and ROTOR 3DF cranks. 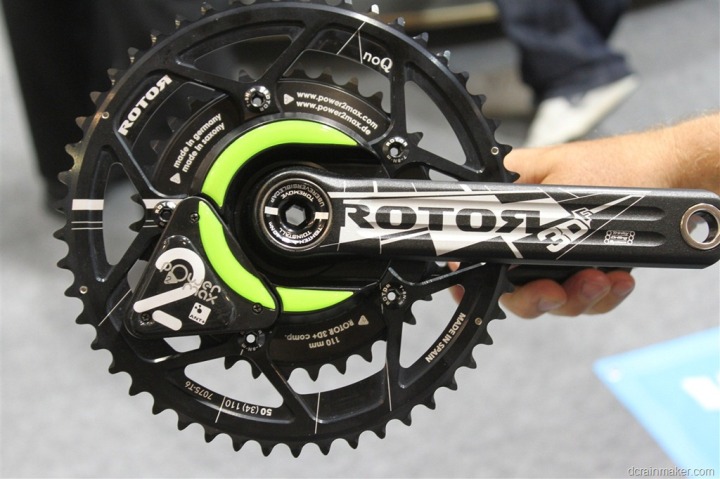 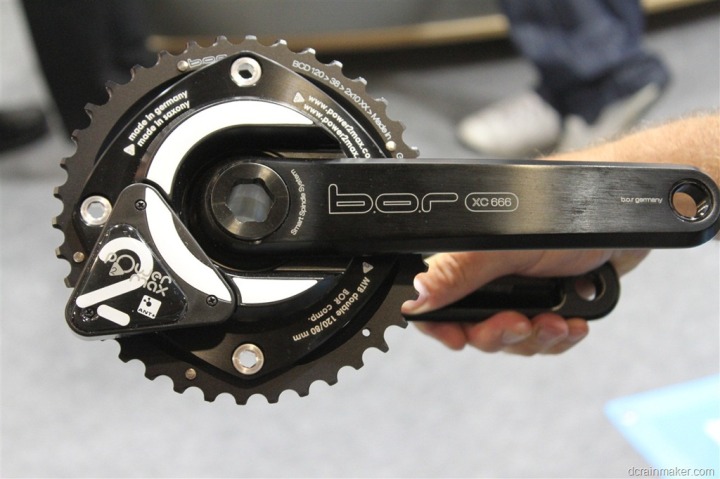 Finally, they’ll be introducing a new Power2Max branded head unit, which is simply a rebranded version of the O_Synce head unit.  This unit includes left/right ANT+ support, and is pretty much on the same playing field as the Garmin Edge 500 and Timex Cycle Trainer GPS.  I’ll be talking to O_Synce tomorrow about this in more detail. 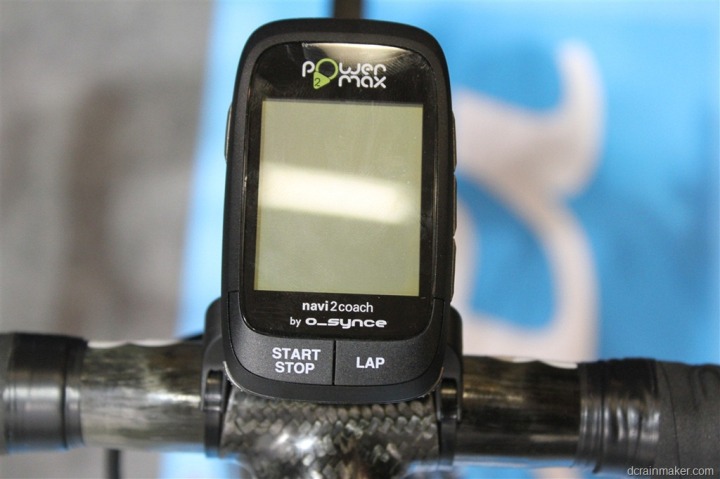 As far as the Power2Max update goes for my test unit – I’ll be swapping out the Power2Max unit that I’ve been doing testing and preparing a product review on, for the updated unit – while I’m at Interbike in about three weeks.  This will give me an opportunity to test out the new unit and report back on results.

As always, thanks for reading – and if you have any questions, feel free to post them below.