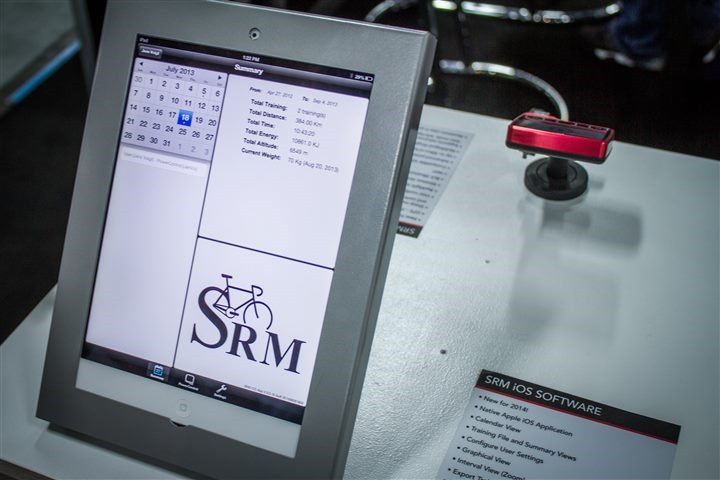 Today I got the chance to go hands-on with a very preliminary version of the SRM iPad application that will accompany the new SRM PC8 head units next spring (2014) as part of a simultaneous release.

I previously covered the new PC8 units a couple weeks ago at Eurobike, including a notable update later to that post from SRM folks after clarification of a number of items.  So for this post here I’m just going to focus on the iPad app, since that wasn’t available then.  I do want to call out here though that the PC8 will connect to any ANT+ power meter, so even if you don’t pickup a SRM power meter, the SRM PC8 and the iOS app will work with any other ANT+ PM.

Now it’s important to note that this is incredibly early in the software development cycle. Think more straw-man than complete-man.  So the text I’m writing in between the pretty pictures is really helping to explain the pieces that aren’t necessarily visible in the app yet.  Make sense?  Good.

First up is getting the data into the app.  You’ve actually got a few options here.  Because the SRM PC8 has WiFi capability, if the PC8 is connected to the same WiFi network as the iPad, then the iPad can actually request the data directly from the PC8 (via WiFi).  In the event WiFi isn’t available then the same process happens via Bluetooth 4.0.

The thinking behind this is a team scenario (including outside a TdF team bus) where a coach could have 15 athletes bike’s nearby and wants to download the data from all of them without physically having to visit them.  This allows them to centrally grab everything in one shot from their couch drinking one of those fancy cappuccinos that everyone Instagrams. 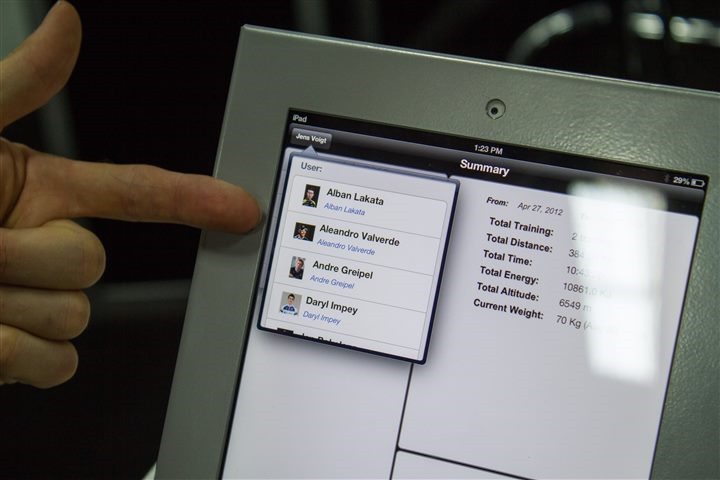 The PC8 requires an authentication code/process prior to allowing other devices to download data wirelessly from it (namely the iPad app), ensuring that random folks passing by aren’t able to access the data without authorization.

Once the data is downloaded it automatically ends up in the appropriate rider’s profile based on the SRM PC8 unique ID’s.  From there you can view the a training calendar for that rider and select the specific ride file.

That ride file is then displayed on the iPad.  Because this iPad was locked in a display case we had to view it in portrait mode, but had we snapped the case off the table it would have properly rotated to landscape mode. 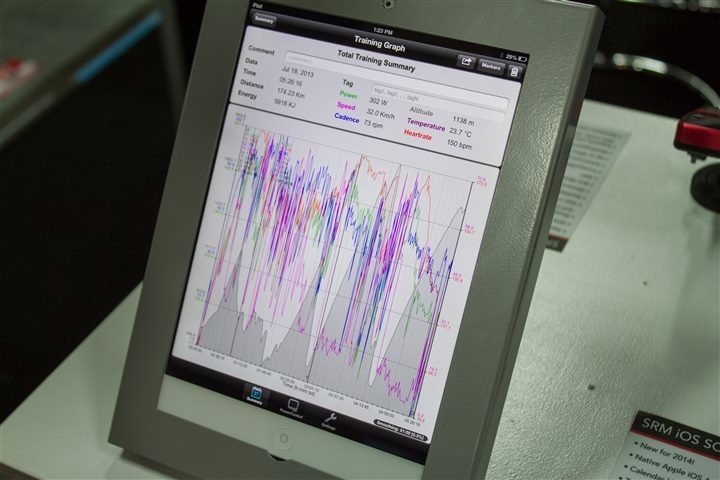 The app has high-level metrics similar to most other activity apps out there on the market today.

You can select a specific portion of time and zoom into that piece (both on the graph as well as the summary information). 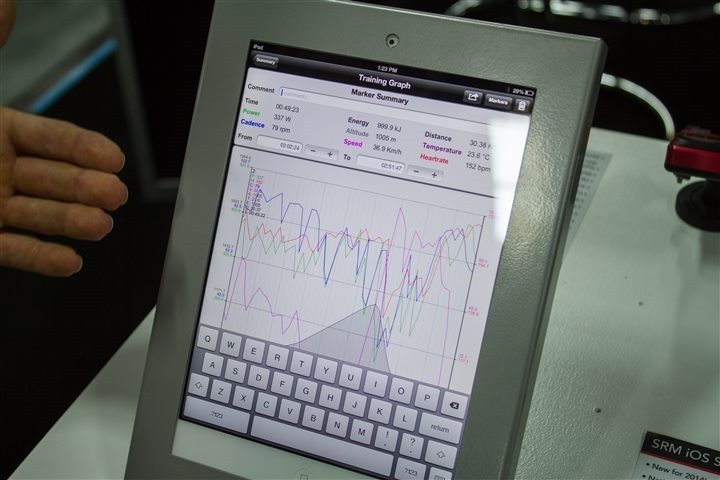 You can also leverage markers that may be within the file as well to dive into a specific portion. 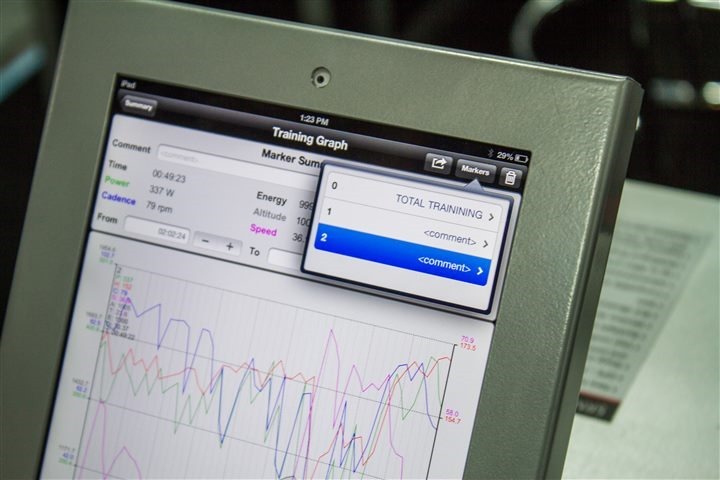 The above views aren’t limited however to just historical files.  The app can also stream real-time information if you happen to be on a trainer (or, a team-car following along).  The data will be streamed straight to the iPad from the PC8 (not from the power meter itself) and include typical metrics like power/cadence/speed/time, and also will include the TrainingPeaks metrics of Normalized Power (NP), Training Stress Score (TSS), and Intensity Factor (IF).

Speaking of TrainingPeaks, you’ll be able to export directly from the app to various 3rd party providers.  Right now in the early alpha version of the app they just had e-mail of files and actually the ability to wirelessly print out the workout summary information to a compatible AirPrint printer, but other sharing options are coming including Facebook and Twitter.

The file format that the PC8 will use is still being determined.  I heavily encouraged them to follow the rest of the universe and go with the .FIT file format, rather than making up yet another file format (since it’ll be adding in new metrics like GPS data that the SRM PC7 doesn’t have).  By going with .FIT they’ll have out of the box compatibility with every 3rd party out there today…instantly.  And, they wouldn’t have to re-invent the wheel either. 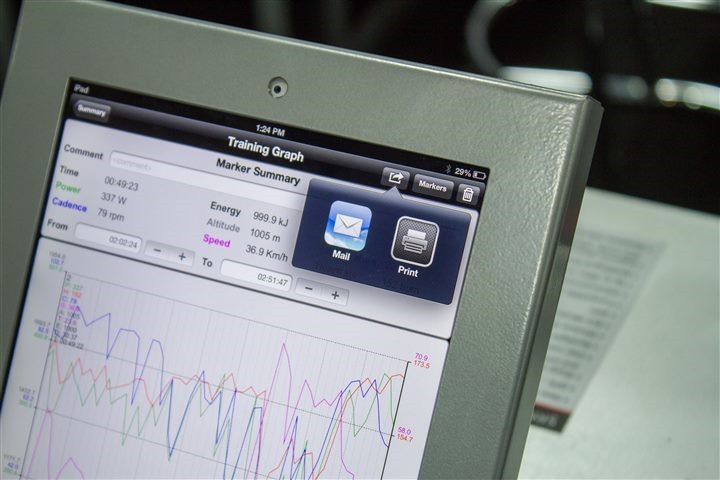 Next up you’ve got the ability to configure the SRM PC8 directly from the iPad.  This page will enable you to scan for devices (via WiFi or Bluetooth) and then configure them quickly with a drag and drop style interface using all of the available data fields. 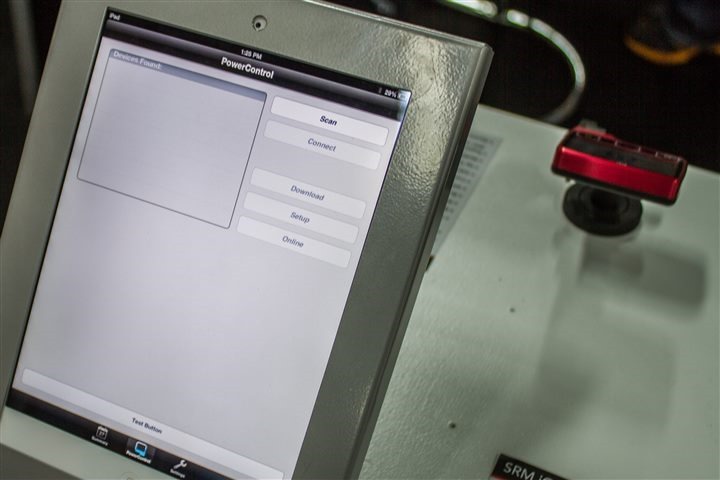 Lastly, within the settings you can change common attributes like units (metric/statute), as well as the charting settings.  Ultimately though this is really just the beginning of things in this section. 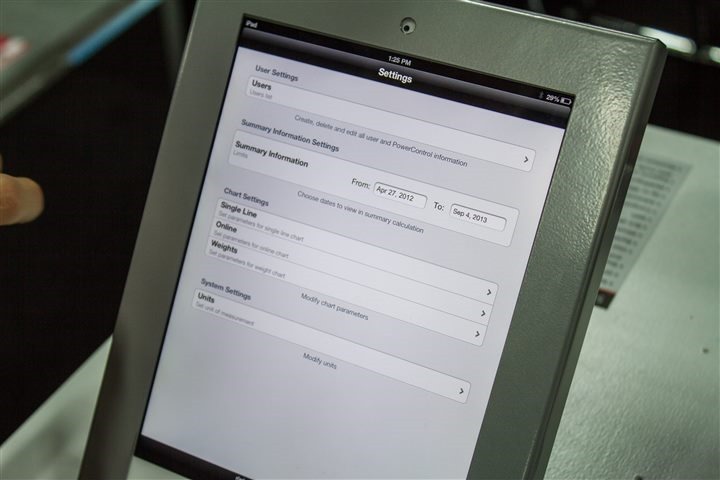 For those curious, here’s the official ‘spec list’ that was next to the demo: 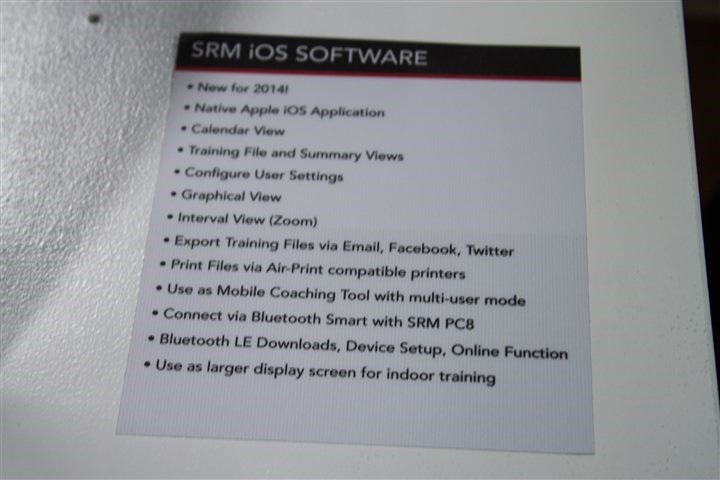 In looking at some of what they’re planning to do around connectivity between the PC8 and the iOS app, they’re doing some pretty cool things that nobody else is approaching yet – especially around the group functionality and authorization pieces.  Further, the display of real-time streaming metrics from PC8 to iPad for when on a trainer is also pretty darn cool and helps bridge the gap between ANT+ and non-ANT+ devices like the iPad.

I did point out that it sounds like the PC8 is acting as a small web server by having an API that other devices are connecting to (the SRM iOS app), and it would be pretty interesting to allow 3rd party developers to connect to that interface and do cool things around data streaming from the PC8 to other connected platforms (for example, applications like TrainerRoad, Kinomap, or similar).

It would also potentially help fill the gap around Android support, which SRM doesn’t plan to address in the near future. 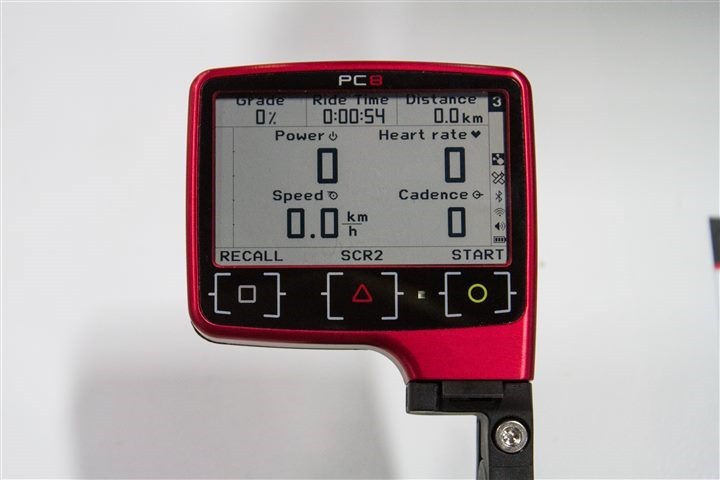 Finally, a number of you asked about where the upcoming rechargeable units stand.  At present the hold-up is actually a simple parts availability issue with the charging connector cable. 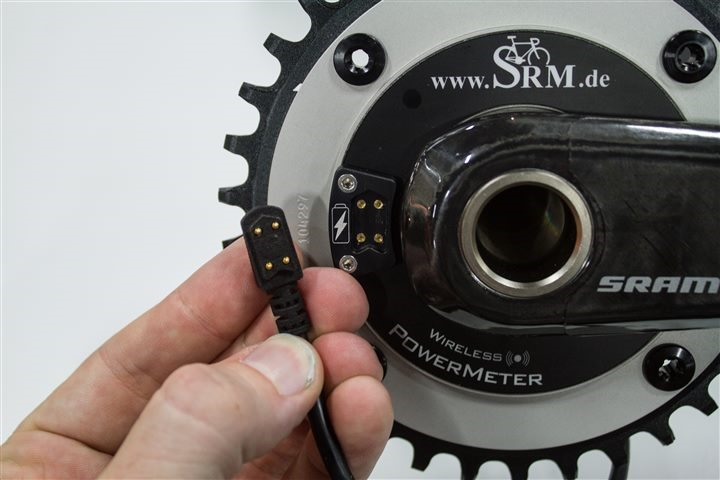 They plan to start shipping the rechargeable units in January, starting with the mountain bike crank seen below. 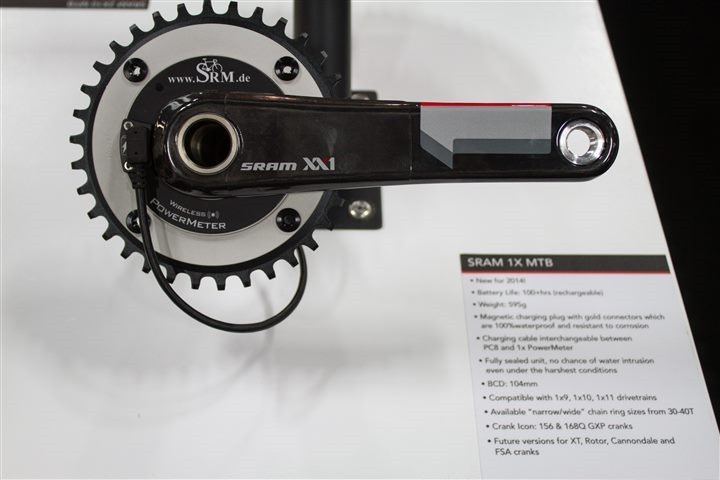 Lastly, for those that have asked, I’ll likely be focusing on a review of the SRM platform in conjunction with the rechargeable units and the SRM PC8 – as they get nearer to release of both devices.