This week at Interbike, K-Edge showed off a number of new mounts that will be hitting the market starting October 7th.  While K-Edge has been selling Garmin Edge compatible mounts for a while now, these mounts either update some of those designs a bit, or offer them in new places.

Unlike other mounts on the market, the K-Edge mounts are all CNC machined aluminum, and most can handle upwards of 90 pounds of weight on them (in the event your Garmin Edge unit feasts at the Vegas buffets).  That’s about 41kg of weight for you metric folk.

First up on the list is the new Garmin-compatible K-Edge Time Trial mount, which actually started shipping three weeks ago and was announced mid-summer.  This is notably different than other mounts in that it’s inset into the handlebars (as opposed to being even with the bars).  The challenge of course with setting them down into the handlebars is that the Edge quarter-turn mounts requires you to…well…turn it. Given the width that most aerobars are separated by, this is a problem for the larger units.

The K-Edge TT mount solves that problem by adding a lever below the Garmin so that the mount ‘turns’, rather than the Garmin turning. 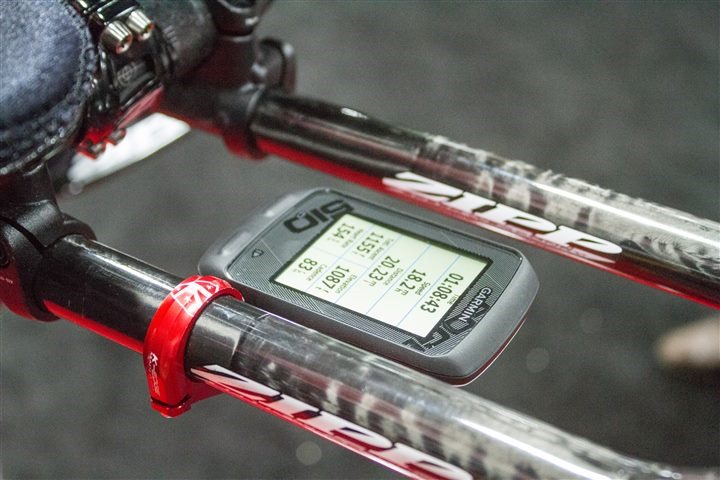 Here you can see a better shot of the $75 TT mount from below, and the lever that rotates: 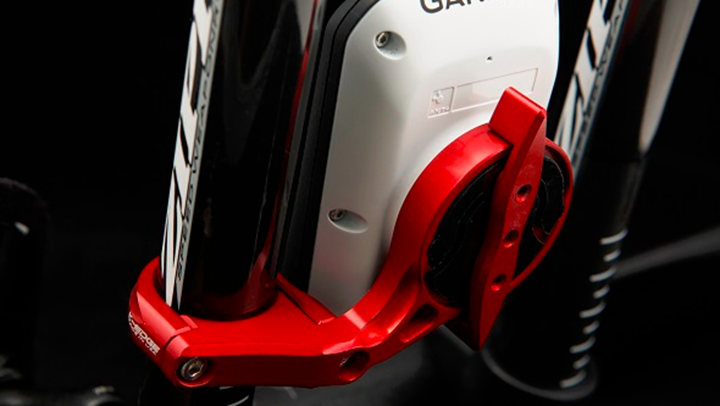 Next we’ve got their new Garmin Edge compatible mountain bike mounts.  These mounts attach to a 1-1/8th” steerer tube, and then sit on top of the stem.  All mounts are aluminum, with a plastic molded connection point for the Garmin unit itself.

Within these new products you’ve got two options.  The first is a $29 non-adjustable mount that sits over the stem: 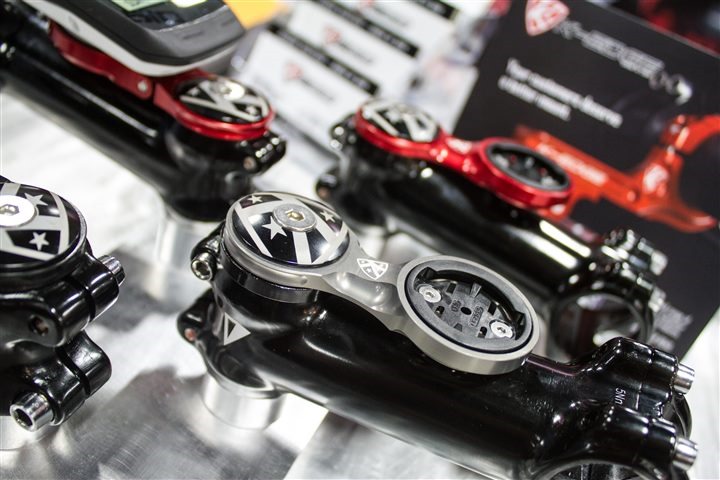 Then they’ve got a $39 adjustable version that allows you to pivot the unit slightly upwards as needed: 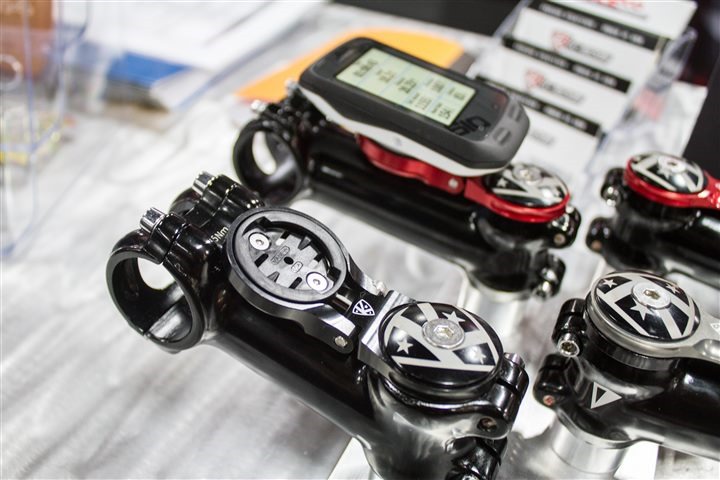 Leaving the bike computers behind, K-Edge is expanding their camera mounting options – adding to their existing GoPro-specific lineup with a more generic tripod compatible option.  With this you can attach anything from the new Sony Action Cam (which is really how this lineup came to fruition), as well as any camera with a tripod mount on the bottom (basically every camera on the planet).  I even watched someone come by and attach a full DSLR unit to one without any issues.

Because K-Edge previously made GoPro compatible mounts, they’re going to be offering two ways of attaching these new more generic mounts.  First is an adapter to the GoPro mounts, and then second is with a full-on mount straight onto the handlebar (no adapter required).

By doing this they’re able to leverage the flexibility of some of their previous mounts.  Below you see the new adapter turned upside-down and attached to the previous GoPro handlebar mount: 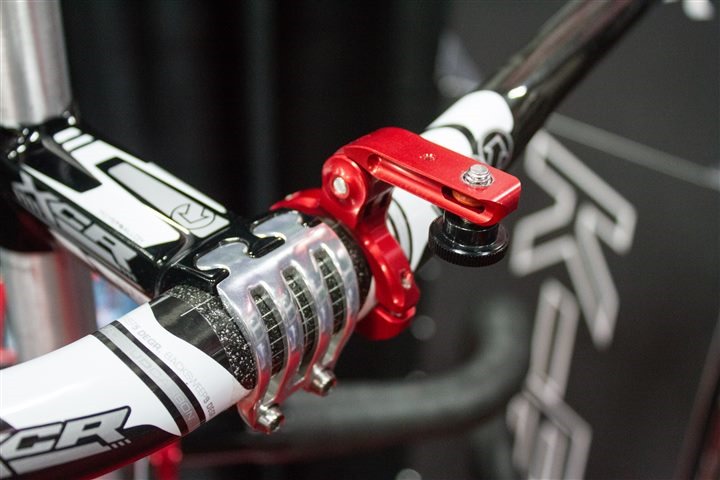 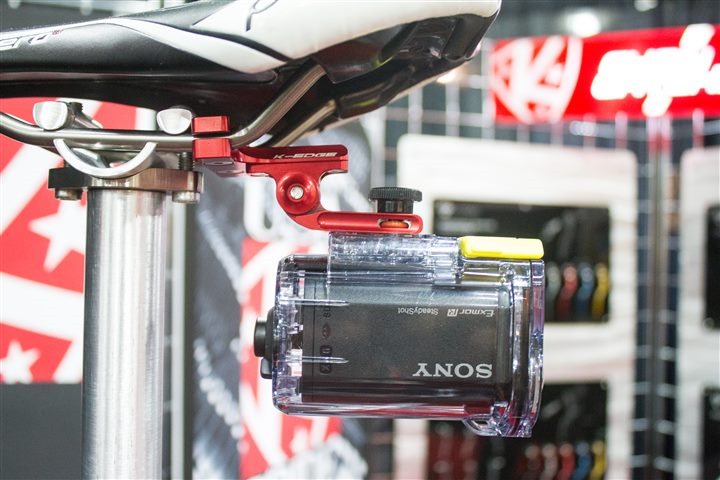 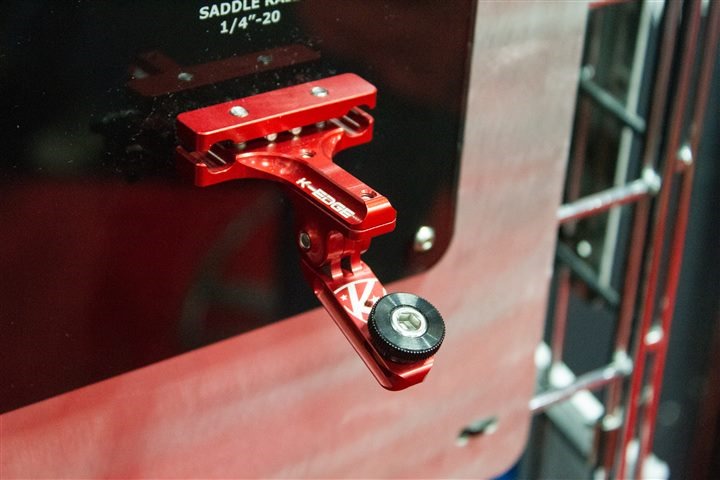 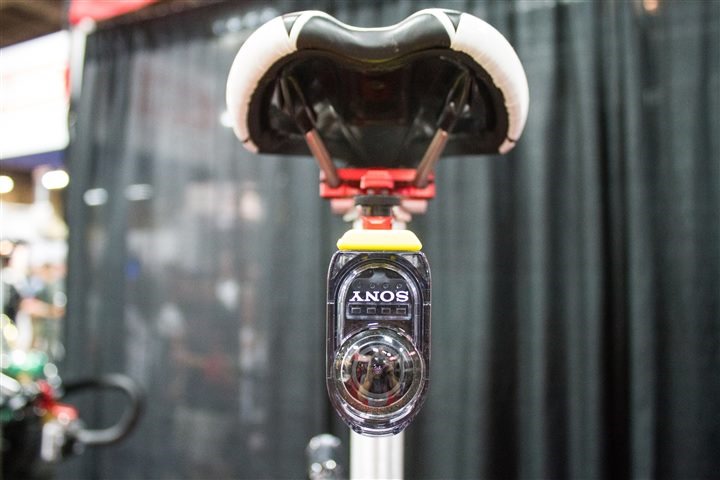 Looking at the mounts that don’t require an adapter you’ve got the out front handlebar mount with the universal tripod connector: 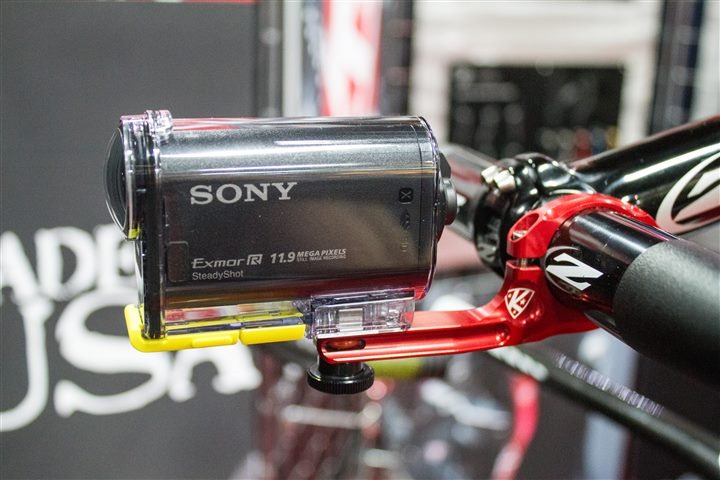 Thus, here’s the three basic options for attachment.  On the left you’ve got a mount for where you screw/bolt the unit to something, then in the middle the handlebar mount, and on the right the saddle rail mount.  For the handlebar mount you’ve really got two options though. You can use the ‘out-front’ style mount (seen above), or ‘over the bar’ style mount seen below. 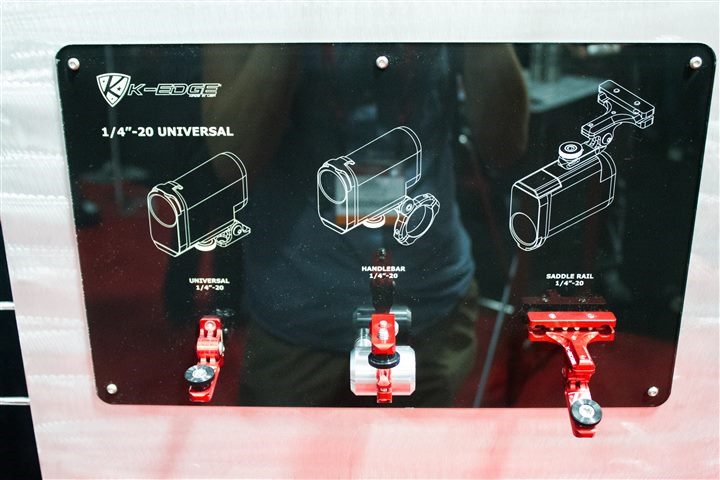 As noted, the availability for everything seen in this post is either ‘already available’, or just a touch over two weeks away on October 7th.

I’ve got a few of the new mounts with me headed back home to try out (in addition to what I’ve already bought for my upcoming mount roundup post).  I’m really looking forward to testing out the new universal mounts though – not only with a few upcoming action cameras, but also even with my DSLR for various product items.